Home » Otaku Culture » This is General Products! A brief look at a work in progress.

This is General Products! A brief look at a work in progress.

Recently, I picked up an old General Products catalog from 1984, which I thought of translating and posting. The waxing romantic about GP will come when I post about it for real, but for now this is just a little bit of a taste. Anyway I quickly abandoned the idea of completely translating it, as I don't have the time, the experience with using editing software, and frankly, I'm too lazy. I will be posting full scans of the catalog though, and translating a couple of passages. In the mean time, I spent my night translating the store map, so I thought I'd post that. Be forewarned though, the editing probably got sloppier as the night went on. Also, it's a two page spread, and I'm not about to take the catalog apart, so the pages aren't joined together as nicely as I would have liked. Oh well.
There are some translation notes I'd talk about, but I'm going to bed for now. 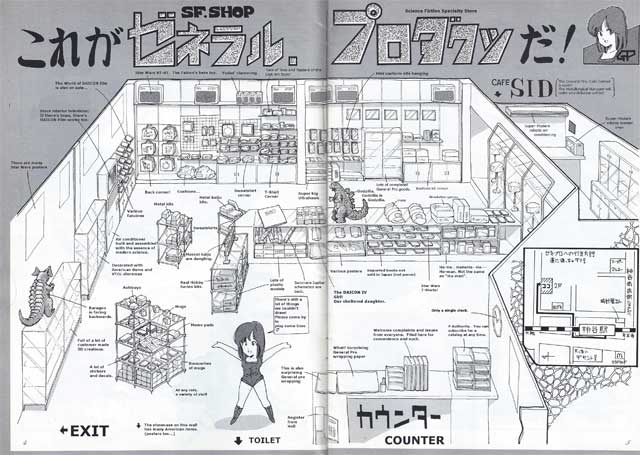 "Metallurgical Manager"- This was a tough one. I think the use of the word "焼結" (shouketstu) is a reference to Shaider, as in trying to translate it I found out it was his henshin phrase. Shouketsu means "sintering", the process of turning powders into solids, often used in ceramics and metallurgy. The problem was, I don't think anyone knows what sintering means (I don't, at least), and I couldn't figure out another word that would describe it as well in a short space. I even watched the first episode of Shaider subbed to see how the translators handled it, and they just left it as Japanese...so the translation's not quite right, but I think it works alright.

"P Authority" - So the original is "P通" (tsuu), the same word in the video game magazine Famitsu. I have no idea what this catalog is. Google had nothing, so I don't know if it's an abbreviation, or if that's the name and there's no record of it. I thought it might be Plamo Authority, but that doesn't appear to be a thing either.

Oh and I think the He-Man joke works better in Japanese.