While some would tell you "don't sweat the small stuff", I prefer the pre-existing catchphrase "it's the little things in life that matter". As a Jumbo Machinder collector, it's likely that you may have heard me complain on occasion about a lack of space. But it's not just the jumbos that cause this problem. I've also got about 20 boxes of comic books. And after I stopped collecting comics and before I started in on toys, I had another brief obsession...dvds. For awhile there, I was buying them hand over fist. And while my collection now isn't that big, I do think it's larger than the average person's. I've got just north of 400 of them and as that number grew, it became harder and harder to find a place to display them all. I had a little bookshelf at first, then a bigger bookshelf and then both bookshelves together and finally both were overflowing. I'd tried to keep my eyes open for a better option, but never really made a point of it. But I recently had enough. Something had to be done. 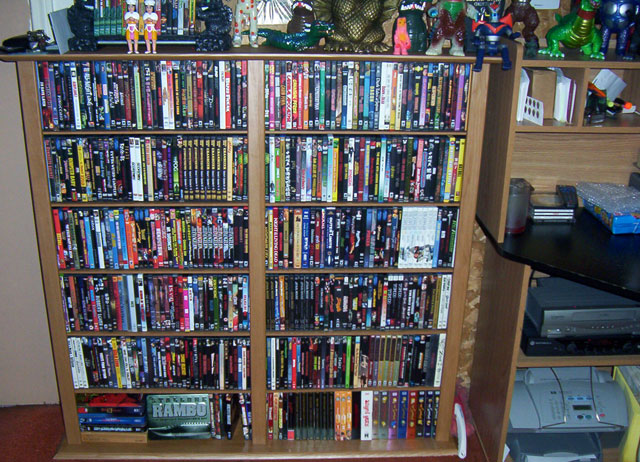 OK, so I bought a new dvd case, what's the big deal you're wondering? Well, it isn't a big deal. It's a little thing. And it's made me happier than you can imagine. I'm all about organization and structure and this shelf was made for me. It holds nearly exactly the amount of dvds I have in my collection and it fits exactly where I needed to put it. Literally right down to the last inch of space I had there. Best of all? The top of it is at the exact height as the desk it sits next to, forming a consistent, structured shelf running along the wall that I can now cover with toys. 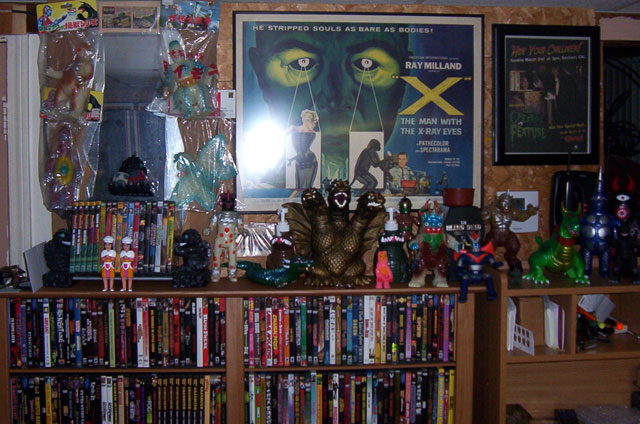 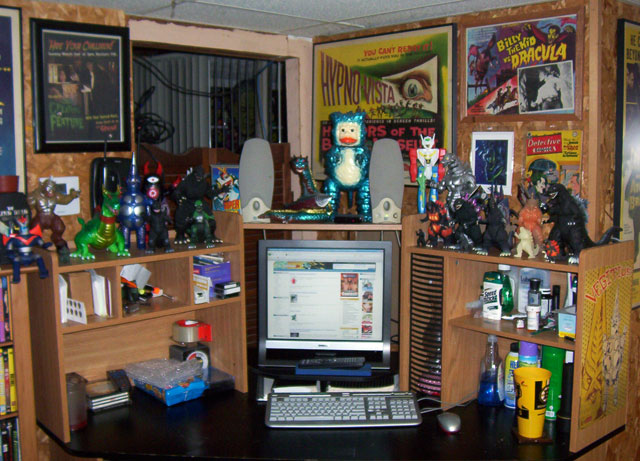 So, now not only does it make my dvd display neater, it also gives me more room to display the ever growing toy collection. On top of that, I had to move a Coffin Joe 1-sheet poster that I had in that spot and swap it out with two half-sheets from another wall. Doing so actually filled more empty wall space that I ultimately had planned to buy another half-sheet to fill. So, in a way, it even saved me money! 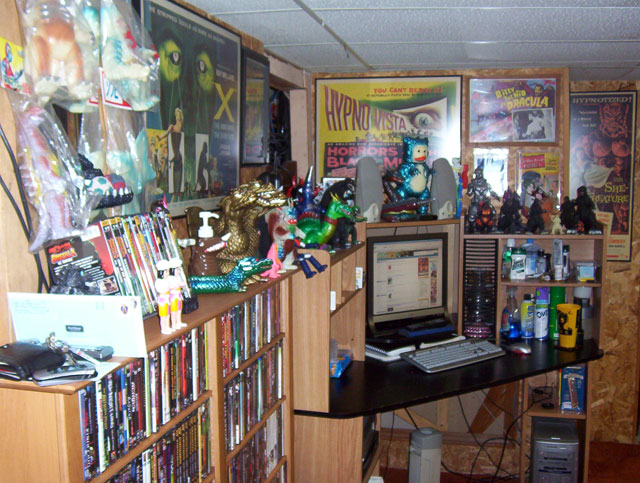 A few things I want to point out from the toys. See the vinyl Great Mazinger there, just chilling with his legs over the side? That's actually from a vintage toy of it riding on a bike or something such thing, but it was thrown in as a gift from a Yahoo Japan seller since it's broken and incomplete. But I think it looks great there. Speaking of gifts, the Godzilla dvd holder and the M1 Manda/Hedorah set were gifts from well known collector Jim Maitland, whom I had the pleasure of meeting at Kimono My House back in January. I had done nothing more than mention his interest in some Jumbo villains to someone I knew was selling them and he bought them. I thought it was just a little thing, but Jim has never forgotten and a couple years later decided to send along those gifts. Too cool! See that brown Captain Maxx? A gift from Mark Nagata of Max Toy Co.! And that boxed Super Warrior bootleg? A gift from Alen Yen of ToyboxDX! And even that frame withe Creature Feature ad in it was a gift from a member of the Universal Monster Army from Xmas 2007 during this secret Santa type exchange we do there (although at the time, it held some Canadian Fay Wray postal items. Hey, when I saw that ad fit just perfectly, I had to make the switch! But don't worry, the Fay Wray stuff is still displayed in my monster room.). Y'know, I didn't sit down to write a blog about gifts from my fellow collectors, but I guess it speaks to their generosity that I'm constantly surrounded by reminders of just how nice many of these folks really are. (wipes tear from eye...awww...)

I can fit EXACTLY the amount of Godzilla dvds I have in there! 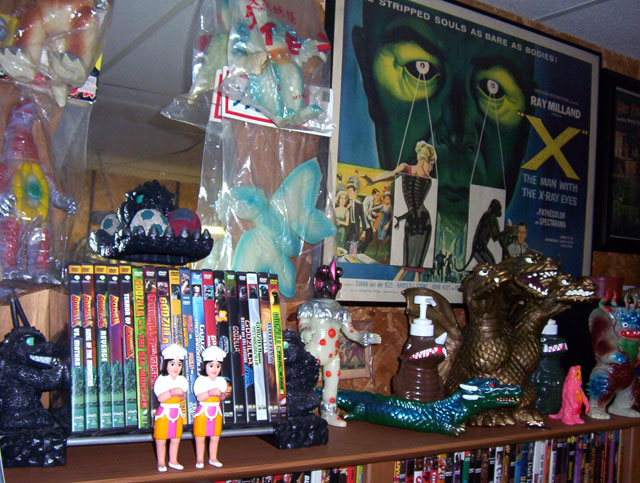 Besides the dvd holder, there's a couple of other neat sort of household items you can see there. Above the kaiju dvds, I have a Godzilla soap dish that is holding my footbags. Gamera and Barugon soap dispensers hold Germ-X and Lubriderm, respectively. The giant King Ghidorah? A piggy bank that roars when you insert a coin. Lately, I've had a real interest in these sort of novelty items (ie; little things) to go along with the actual toys. 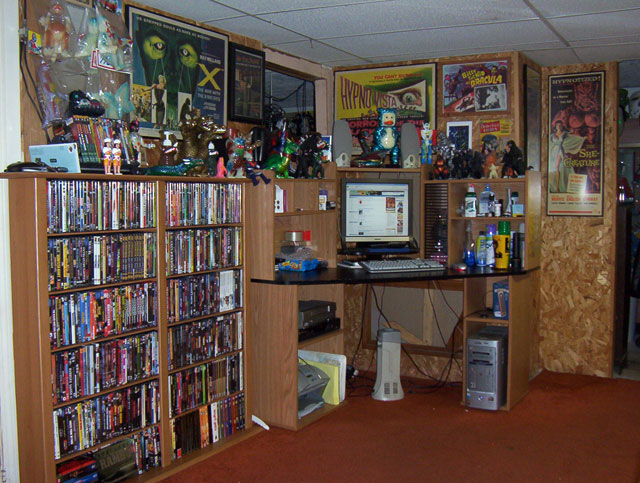 Ok, so anything else happening this weekend? Well, not for me, but a buddy of mine just had the cd release party for the debut album from his band The Blind Eyes on Friday night. I haven't gotten a copy yet, but I'm really looking forward to it since I've been really enjoying the few songs available on their MySpace page. You can check out their blog here. And just so I can tie that in to a website about toys, you should know that my friend, the drummer Matt Picker, is a robot collector and someone I met online way back when we were both posting on the original Cool Japanese Toys message board. And yes, he's given me stuff too, most notably the first Mexican Mazinger Z junior machinder I ever had. Greatest toy ever? No. Just a little thing...

I love the DVD shelf. Awesome. I'm a little leery about the lubriderm, knowing the contents of said DVD collection.

Great for sharing "the Space". What is the name of the creature that is Blue and white with the red lips above your computer? I have a Vinyl of him that I just photographed to review but I don't know his name. It would be great if you could review that as well.

I've been having storage issues as well. I buy DVD's like a mad man and Approaching the 300 mark soon and I'm simple out of space. I haven't even unpacked my LP's records yet since I moved in my new apartment 2 years ago, They are still packed in the garage! Plus with all the model kits I've been building for CDX and my past Militaria collection not to mention my toy collection it's just been a pain! I have too many interests!

Leo, that's the M1 giant sized Garamon. I actually posted a quick review of it a couple years back. Garamon review.