Home » Audio » Destroy All Podcasts DX Episode 368 - Truck Guys: I Don't Care What You Think a.k.a. Truck Rascals: No One Can Stop Me

Destroy All Podcasts DX Episode 368 - Truck Guys: I Don't Care What You Think a.k.a. Truck Rascals: No One Can Stop Me 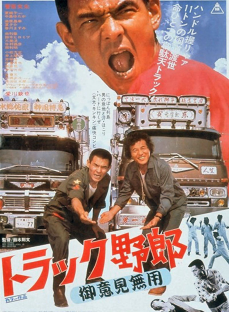 This is about tricked out trucks, poop jokes, and sumo beach parties.

Click [HERE] to throw a koi fish at your nemesis.

PS you can buy this movie here.

Video after the cut.

Hearing this review made me think more of my brother, he was into these movies too, having grown up during those trucker/CB Radio days when Convoy and Smokey & The Bandit was a thing (not to mention the TV series "BJ & The Bear"). It certainly lasted into the 80's (reminded of the 1980 film "Coast To Coast") and I can see how this may have inspired my brother to get into being a truck driver himself. Something I never aspired to at all simply for not having too many blue collar interests in that field.

Speaking of truck horror, more recently, my brother managed to make pals with a group out in Connecticut who used his 'talents' in a crappy Syfy movie that came out last year, but can be found on BluRay/DVD now under the title "Dark Haul" (although Walmart wanted to change the title to "Monster Truck"). He was responsible for some of the visual effects in this (non digital) as well as some of the driving scenes (mostly off camera), but no stunts (since he's not licensed for that). He managed to get the producers to put his surname right on the truck as well, which gets total halfway into this film and never seen again. Still, not bad for such a petty effort for my brother to get his name out there on the idiot box (let alone globally if they're selling this movie in other countries).
https://www.shoutfactory.com/film/film-horror/dark-haul
http://www.imdb.com/title/tt3188614/
http://www.shocktillyoudrop.com/news/365133-exclusive-trailer-debut-syfy-creature-feature-dark-haul/#/slide/3

After filming, it sounded like my brother wanted to get me hooked up with these guys but apparently nothing ever happened at all, and from the last I've heard from him, they moved to California and are doing projects there, so I guess my brother's 15 minutes of fame have ended.