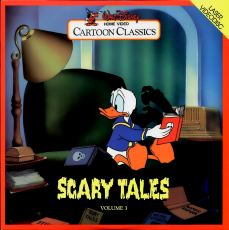 This is about skeletons playing each other's butts as musical instruments, hallucinating about Jessica Rabbit, and cat-based racism.

Click [HERE] to drive your bike through a mirror.

Video after the cut.

Donald Duck and the Gorilla

Hopefully this isn't scrapping the bottom of the pile that you've done to do this review. I do remember this same exact tape personally as I would play it over and over as a 6/7 year old.

It's true Jack King isn't a great director of these, and he seem to get stuck with the Donald/nephews shtick over and over. Some though are my favorite like "Donald's Crime" where Donald steals from his nephews' piggy bank and goes on a weird crime drama hallucination hoping not to get caught by the law. Going by Wiki, he did last too long as he retired in '48 and died a decade later (still in his early 60's).
https://en.wikipedia.org/wiki/Jack_King_(animator)

Aside from Donald, Jack Kinney is also well remembered for his Goofy cartoons too (a lot of the "How-To" and "Sport" stuff) The only bald spot on his record as I see it is his involvement on the Popeye TV cartoons of the 60's, that has very inept writing and direction I feel. At least he lived long enough to write a book about his time at Disney's.
https://en.wikipedia.org/wiki/Jack_Kinney

Ub Iwerks was screwed over a number of times back then, namely in the 30's as as after being lured by Pat Powers (the guy behind the "Cinephone" process used on Steamboat Willie) to operate his own studio for him, produced cartoons that were released by MGM like Flip the Frog, Willie Whopper and later the "ComiColor" series). After coming back to Disney, Ub mostly stayed in the editorial dept. and developed a lot of great cinematic effects that became standard in the ensuing decades such as his work on The Birds and Mary Poppins. A pretty cool book and documentary was released about his career you can check out.
http://www.dailymotion.com/video/xnpkgt_the-hand-behind-the-mouse-the-ub-iwerks-story-part-1_shortfilms

David Hand certainly is someone of historic note to talk about for his direction of Snow White. He went on to set up a studio in England that put out a number of cartoons during a time when the importing of American fare was highly taxed in Britain I've read. These cartoons can be found on YT under the "Animaland" series, though at the time they came out, they might've seemed a bit dated over what was starting to emerge back home with the rise of abstract, contemporary art from the likes of UPA and others.
https://www.youtube.com/watch?v=b_5C4ZEYCcI
https://www.youtube.com/watch?v=jU6Fma3sahE

It's weird people think "Der Fuehrer's Face is considered a Nazi cartoon when it's clearly anti-Nazi (especially the very end if you bother to stick around long enough). Disney also produced the more seriously dark "Education For Death", loosely inspired from a book by Gregor Ziemer, about a early life of a child raised in NazI Germany.
https://www.youtube.com/watch?v=l14WDZCnz-w

Love to see what else from the heyday you might tackle some day. I would've expected an episode like this to come out around Halloween personally. Maybe you could do "The Adventures of Ichabod & Mr. Toad" then (though I'm sure you don't have an interest to cover Disney features like that anyway). A review of "Song of the South" would be nice if you ever land a copy like I did on LaserDisc.

Technically, H-B didn't do "Adult Swim", that was basically some nuts at Cartoon Network that decided to do what they did to that ol' junk.