If you have been any sort of regular reader of CollectionDX you have figured out that there are some films, characters and TV shows that have played into my own personal mythology. Things like Star Wars, Flash Gordon, Buck Rogers, Robotech, Voltron are all in the mix and get mentioned quite a bit around these parts actually but I do love me some superheroes and sequential art. So when I got an offer to check out what Catastrophic Comics was doing while at San Diego Comic Con 2009 I jumped at it. Why? Who is Catastrophic Comics and why did I care? Read on...

I loved all the traditional superhero stuff when I was younger but in 1981 the likes of Superman and Batman where replaced by a man named Ralph Hinkley. Ralph was the main character of the ABC TV series, The Greatest American Hero and portrayed by actor William Katt. Well flash forward some 26 years later and Mr. Katt hasn't quite left the superhero thing behind...

Which brings me to my stop at Catastrophic Comics while at San Diego Comic Con 2009. Catastrophic Comics is the brainchild of William Katt and Christopher Folino (Responsible for the incredibly funny film, Gamers.) Their first series out of the gate for the new company was a revamping of The Greatest American Hero but certainly not their last. 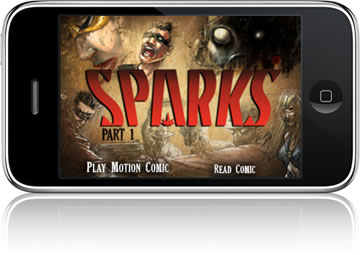 But what they where really excited about was their iTunes Motion Comics based on their second series, Sparks. Sparks is a 6 issue mini series (Written by Christopher Folino and Illustrated by JM Ringuet) that tells the story of Ian Sparks, a super who's life is turned upside down by a series of tragic and strange events. It's a dark, film noire style thriller with lots of twits and turns. It's really quite a good read but also intended for mature readers. I don't want to say much more than that because the story is really told in the reveal and the twists and turns are very good indeed.

Well Catastrophic Comics has taken the art form their Sparks series and revamped it into a fully voice-acted, scored and dramatic motion comic. I have to admit, a “motion comic” sounds kind of gimmicky but the finished product is very cool actually.

Available for both the iPhone and iPod Touch for a mere $1! Each issue is to be a stand alone episode in the motion comic series available thru the iTunes store. Episodes 1 and 2 are available at the time od this article. The production value is fantastic, art stunning and the story is truly intriguing. If you have and iPhone or iPod Touch you've spent $1 on dumber things in the App Store. Give Sparks a try, you will be entertained.

So while at their booth I did indeed get a chance to sit and chat with some of the talent involved with the production of Sparks.

Michael Bell is the voice of Matanza and co-director of the motion comic, Sparks. Mr. Bell voiced half of my childhood it turned out. Probably most notably known as the voice of Duke in the original G.I.Joe cartoon series as well as Prowl from Transformers. A quick of IMDB shows Mr. Bell is indeed the definition of a working actor and has been a busy man over the years and I couldn't resist getting a picture with him. Thanks for being so pleasant to chat with Mr. Bell. It was an honor and a privilege.

I'll be honest here. I completely locked up like a deer in headlights. At this point I had met, bumped into and chatted with more than a number of famous folks and people who's work I admired but the 4th grader deep down inside got the best of me here. To read more about that fanboy gushing you can check my article here.

Catastrophic Comics was formed by William Katt and Christopher Folino when a film script entitled Mythology Wars didn't quite take off for them. Using the newly formed company as an opportunity to reintroduce The Greatest American Hero to audiences as well as launching the original property, Sparks. (The formerly mentioned Mythology Wars is due late this year/early next as a comic book maxi-series and readers of the site know my passion for things esoteric and world myth in general and what little I saw looked very intriguing.)

So the long and the short of it is... Catastrophic Comics was founded by some very cool guys, to tell some cool stories and I am very much looking forward to seeing more from them.

You can find Sparks Part 1 and Sparks Part 2 at the iTunes store. You can keep up on all the latest news as well as view previews of their comics or order merchandise autographed by William Katt to you at Catastrophic Comics. Now that I know these guys are doing all this great stuff I will be paying attention and I hope you'll give their stuff a look.