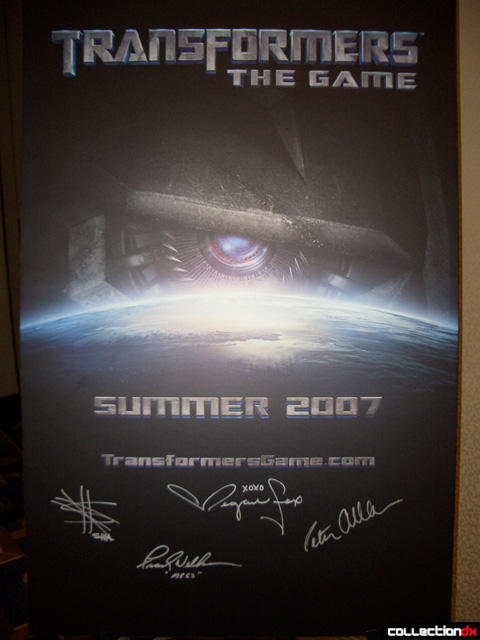 Activision was nice enough to fly me out to Santa Monica to meet with the Developers and get some hands on time with Transformers: The Game for the Xbox 360, PS3, Wii, PSP and both versions of the Nintendo DS.

It was a day long event that started with Breakfast with folks from Step 3 and Activision as well as writers from several of the Transformers fan sites.

At noon the writers meet up and we are brought to the presentation room. It turns out that only fan sites where invited and we where the very first press ever to see the game. The Developers wanted to thank the fan sites and fans for all their support and they thought this was the best way.

First Dan Saurez showed us the opening of the game and it truly left me stunned. The cut scenes are done by the same folks that did the cut scenes for Marvel’s Deadly Alliance

Then the development team demonstrated some game play aspects and showed off some of the cooler features and inside jokes hidden in the game. I must say there was definitely a LOT of passion from the different team for the Transformers and it showed during the presentation. But would it translate to a good game?

After that they broke us up into groups and gave us 20 minutes on each platform to play our hearts out. Now though I consider myself a fairly decent story teller, I will not burden you with a full blow by blow review of the games. I am not a video game reviewer so instead I will just hit the main points for you. 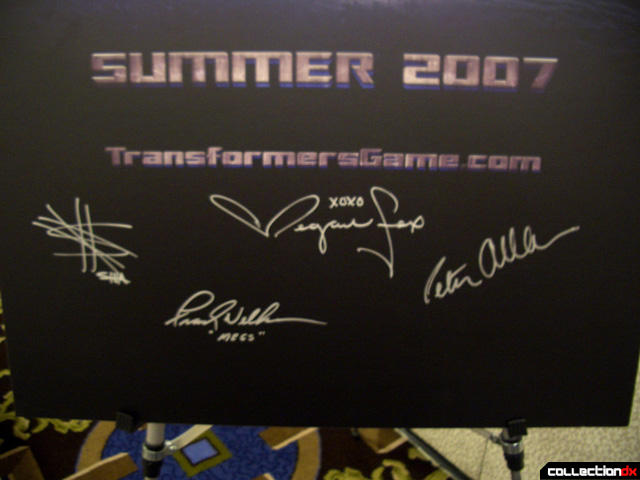 Each of the console versions was basically the same, just tweaked to support those systems features. Of the three I thought the Xbox 360 had the best graphics and the tightest game play but keep in mind I have not had any previous experience with either a PS3 or a Nintendo Wii controller so my opinion of those controls may not be very valid.

• Open world environment similar to Grand theft Auto with Mission Hubs like Need For Speed.
• Fully destructible environments. It’s actually things like destroying the environment that let you unlock bonus content and side missions
• Play as either an Autobot or Decepticon
• Lots of unlock able content
• 13 Transformers seen in the film, 9 are playable.
• Unlock able G1 skins. The Optimus Prime made everyone squeal with delight.
• Lot’s of inside jokes and nod’s to the original series. For example Hound is not in the film but there is a Hound’s Snack Shack in the game.
• There will be downloadable content for Xbox Live but no specifics where given as to what kind of content would be available.
• Peter Cullen does the voice of Optimus Prime for the game as does the TV shows original Megaton, Frank Welker. Welker is not in the film, that part is voiced by Hugo Weaving but had not been cast yet when the game producers needed to record dialogue for the game.

These definetly took me by surprise. Usually a handheld version of a game is a pretty poor attempt at porting the console version with little thought put into it. This is not the case with the Transformers: The Game.

The PSP version is done by the folks that made the very excellent PSP version of Star Wars Battlefront and they have really outdone themselves. This is a completely different game and not a port of the console version.
• 20 playable characters, the most of any of the platforms.
• Wireless multiplayer games such as capture the flag and deathmatch

The Nintendo DS version really seemed to get everyone excited. It comes in two different versions, Autobots or Decepticon; each focusing on you making a “new” transformer from scratch, picking your different modes and alternate forms as you go.
• Lots of voice dialogue. More recorded for this version that any other version of the game.
• Different endings depending on which side you choose.
• Everyone around me and I felt it was the best looking DS game ever. Very smooth graphics and excellent sound effects.
• Touch screen is used sparingly with just the transformation being controlled by a button on it. 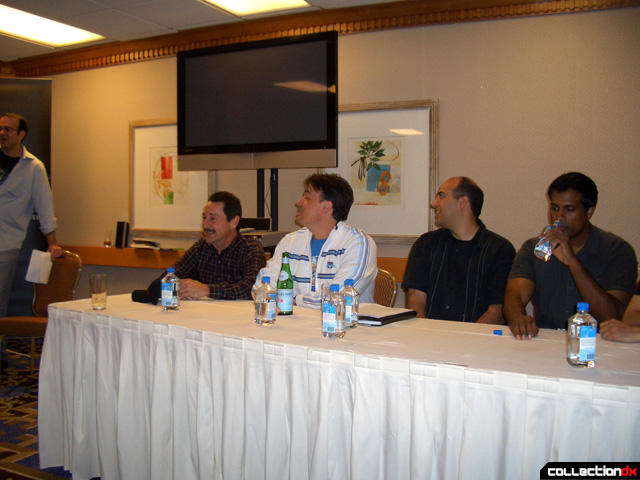 The Question and Answer Session

Out time with the game came to end and they brought us back into a conference room to be greeted by Optimus Prime himself, Peter Cullen and the Producer of the Film, Tom DeSanto as well as lead developers Dan Suarez, Chacko Sonny and Rob Caminos.
• All of the development teams for the games are filled with die hard Transfomer fans.
• Peter Cullen loves the character of Optimus and is thrilled to be in the film. Before the Q and A ended he asked us to pass long a message to the fans. “Thank you from the bottom of my heart for all the support you have shown.” He said that without the fans he wouldn’t be where he is today and wanted to come down to the event to pass that along to the fans.
• Tom DeSanto says while the film is primarily focused on the guys in the audience that there is something in there for everyone. At which point I mentioned that my girlfriend flipped when she saw the latest trailer and is looking forward to it as much as I am, he replied that I should not delay and marry that girl.
• Michael Bay has something special in mind for the movie DVD. He is a huge fan of DVD’s it seems, but no other details where shared. Tom DeSanto did not want to ruin any surprises.

The Verdict
Please, remember this is a preview not a review nor am I a video game reviewer. I am a mild Transformer fan and a huge giant robot fan. With that said, I do think our readers should definitely give this game a look on whatever platform strikes your fancy, as giant robots fighting in a city is about as good as it gets and all indications are this will be a great movie based game.

I want to thank the folks at Activision and Step 3 for flying me out there and giving me this hands on experience. Meeting Optimus Prime was certainly no small feat either; this picture is definitely going into the scrapbook. 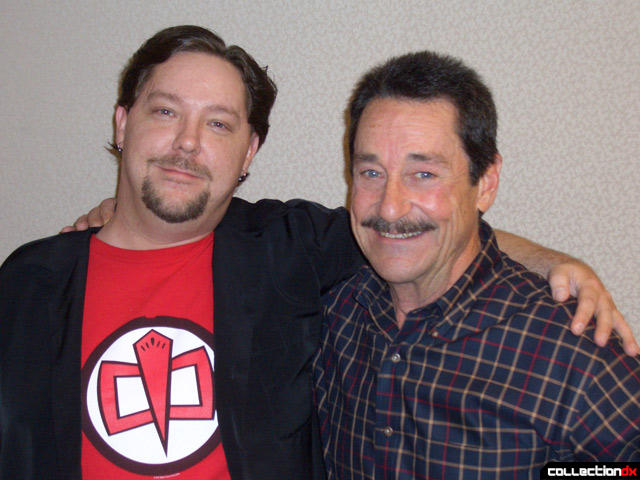 For more details of the game or to play Activison's online game The Battle for the Allspark please head over to Transformers: The Game