Rise of the Teenage Mutant Ninja Turtles from Playmates

Based on the New (2018) Nickelodeon show of the same name

I, like many adult Turtle fans, am skeptical of the new look/direction of the current TV show.

However, when I started seeing promo pics for the new toy line, I did perk up a bit. I loved the last show, LOVED it. But bought very few of the toys. They seemed a bit dull to me, and not terribly accurate to the show. I have not watched the current show yet, but these toy designs are definitely more exciting. Designs which did not thrill me in animated form, seem to work really well in bright plastic. 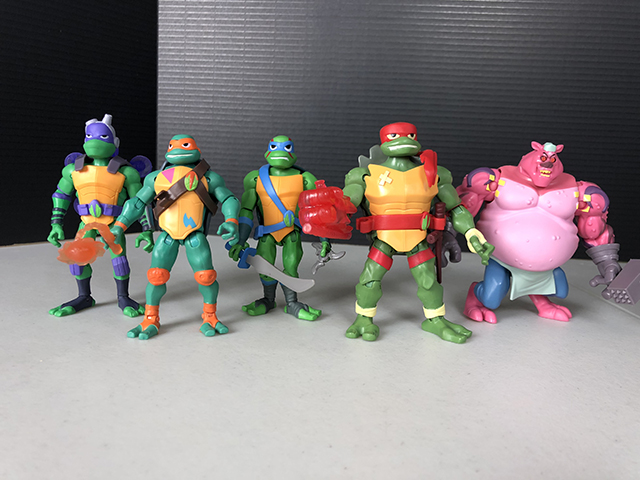 Let's take a look at the 4 Turtles and 1 of the new villains.

He is the leader of the group, for real this time! All the Turtles are now distinct species and different ages. The figures reflect that well in terms of size, color, and build. Raphael is now the oldest and a large snapping turtle. 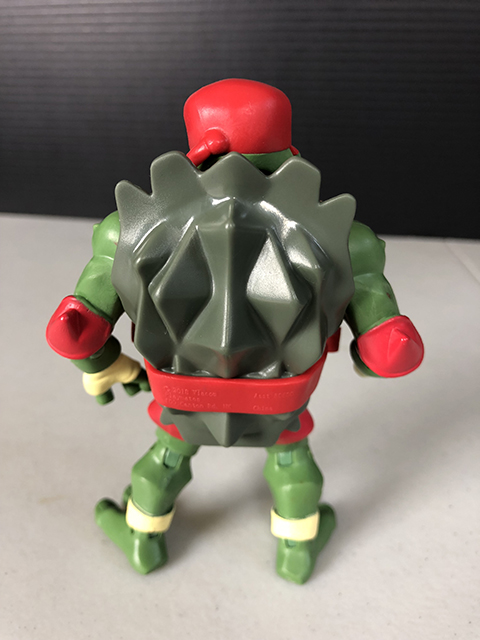 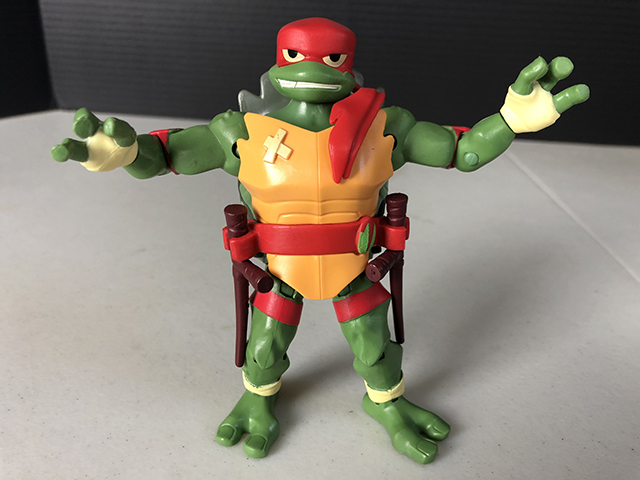 In addition, he now uses tonfas as opposed to the traditional sais. 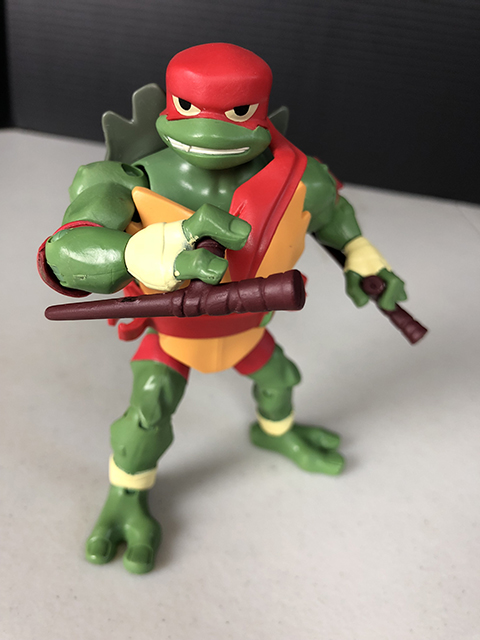 In the new show/toys there are new mystic weapons. 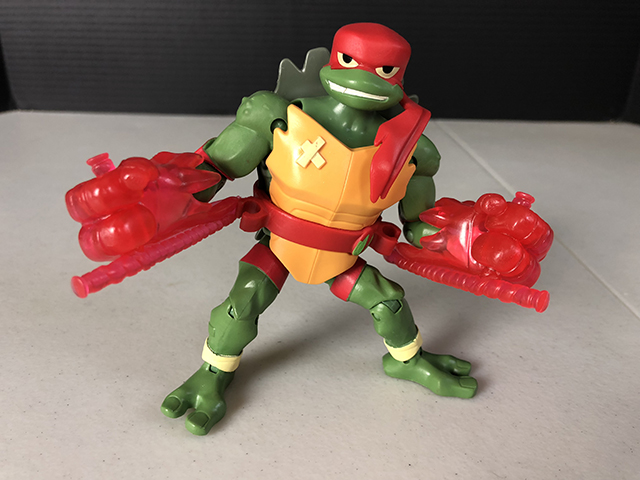 And all four turtles come with 2 Shuriken. 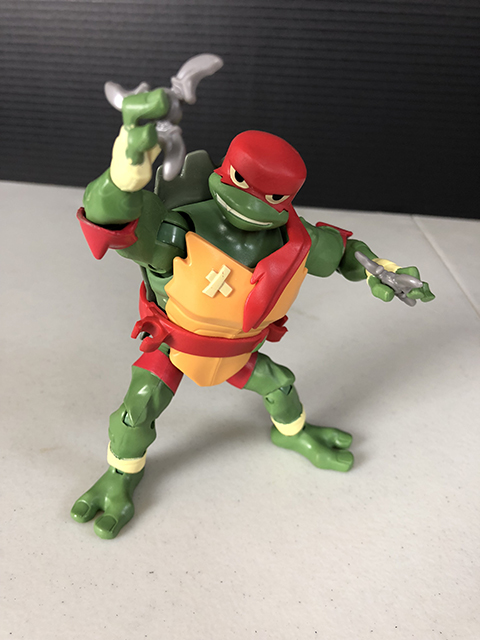 Articulation is fair, and basically the same for all the turtles. It has no waist joint which makes sense because of the shell. Elbows, shoulders, wrists, hips, knees, feet, and head all have 1 or 2 joints which should be enough, but they are a little awkward at times especially the hips that feel like they should be able to move strait out for ninja kicks. That being said, they can pose decently and hold their weapons. 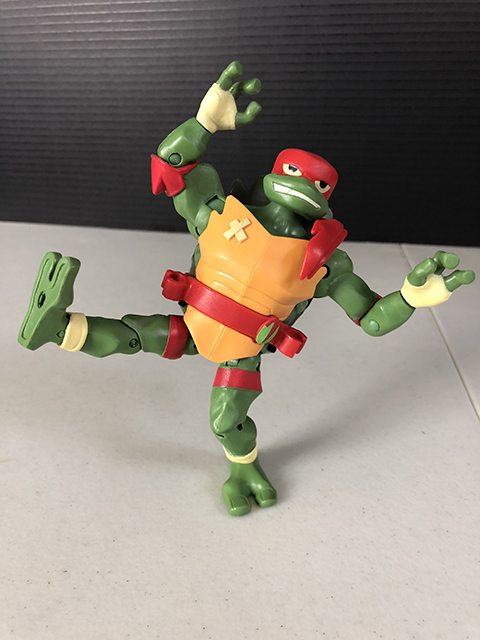 Second oldest, (tied with Leonardo), is a softshell turtle. donny_4.jpg He comes with 2 versions of his Tech-Bo. 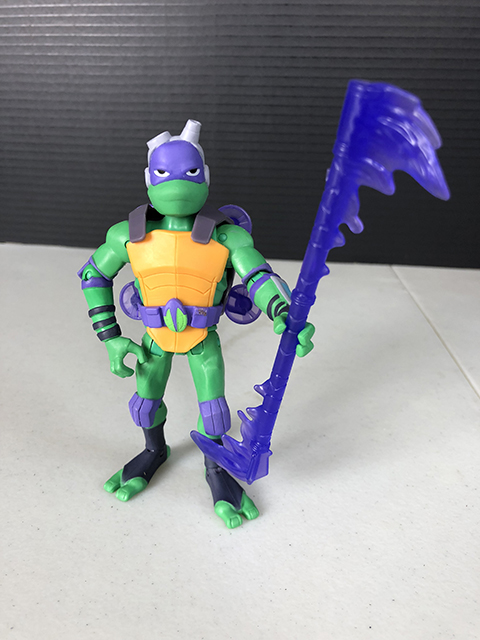 The Shuriken they all come with. donny_2.jpg And best of all an armor shell, and drone that can attach to it. 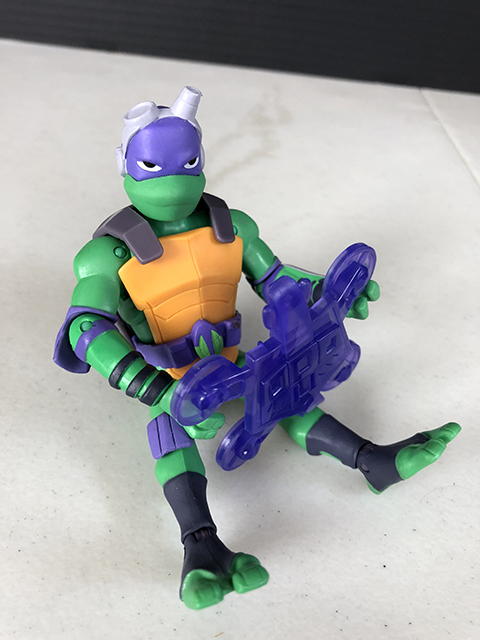 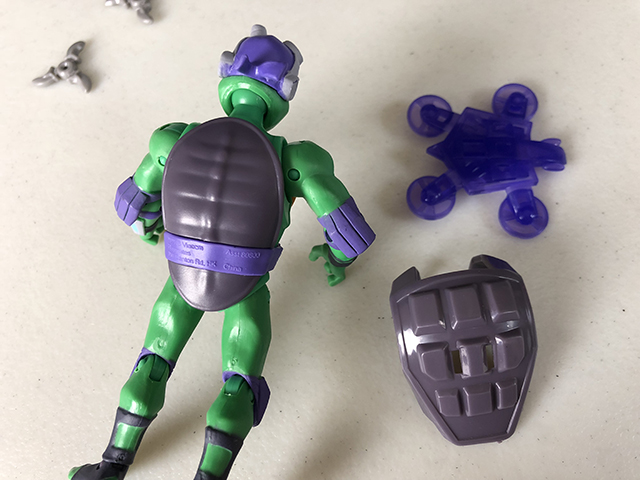 Second oldest, (tied with Donatello), is a red-eared slider turtle. Not the leader. 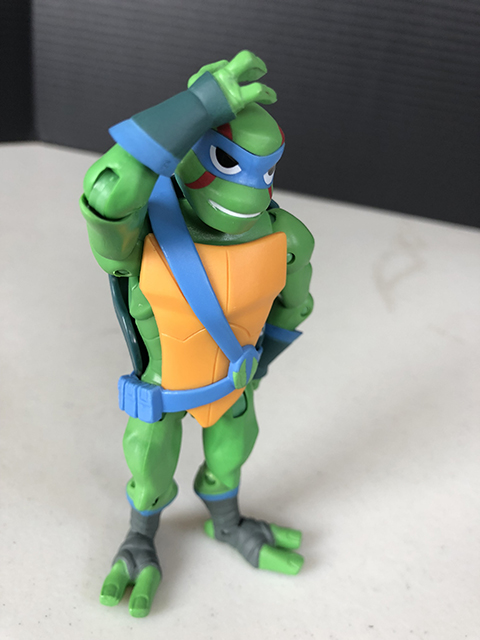 He comes with a single Ōdachi sword. It is a bit warped unfortunately, but, could probably be fixed with some heat. 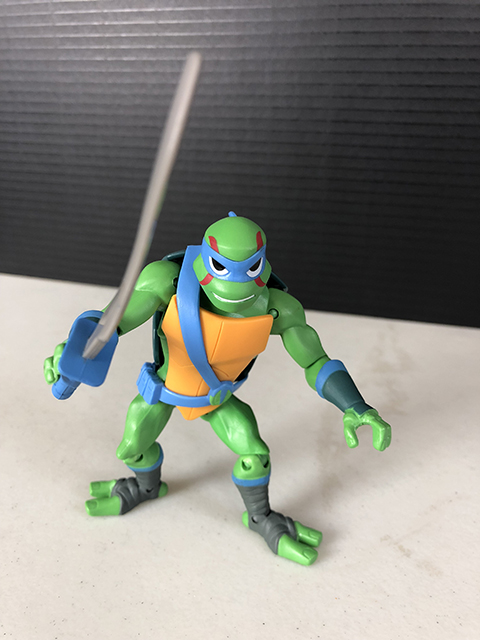 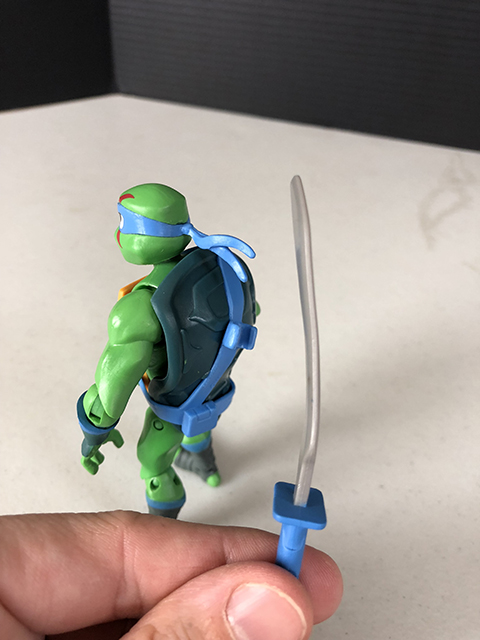 And his second version of the sword. 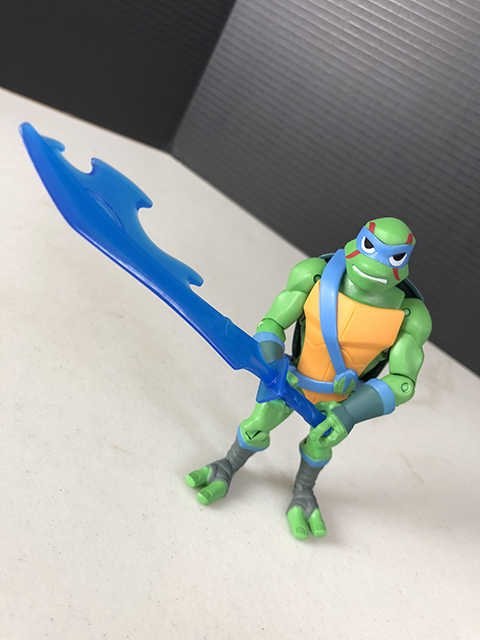 Best of all, he comes with a skateboard that he can balance on and actually rolls. 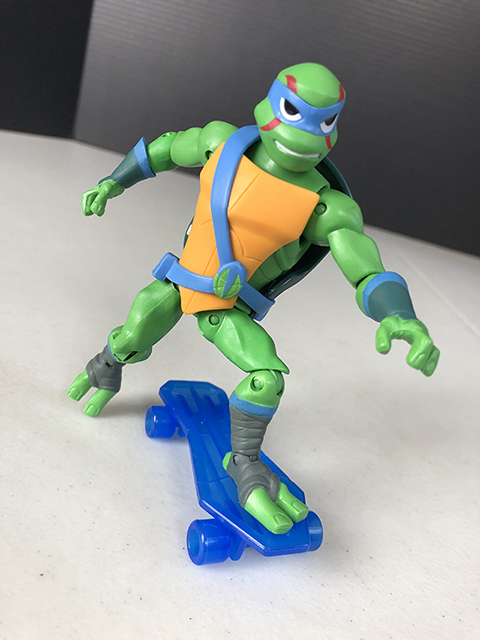 The youngest, he is a Box Turtle. 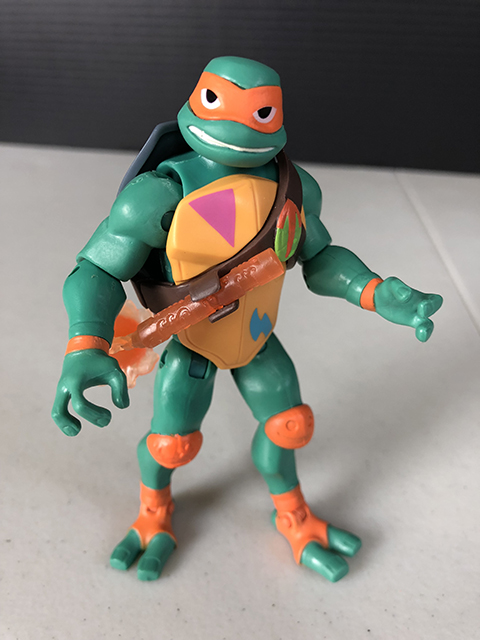 He comes with both Kusari-fundo and Nunchaku. 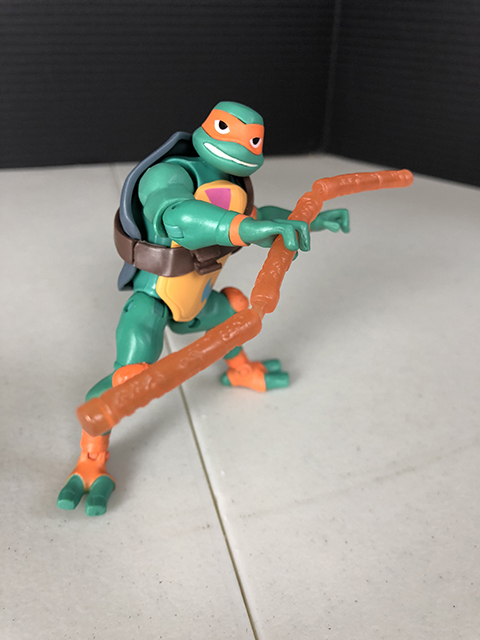 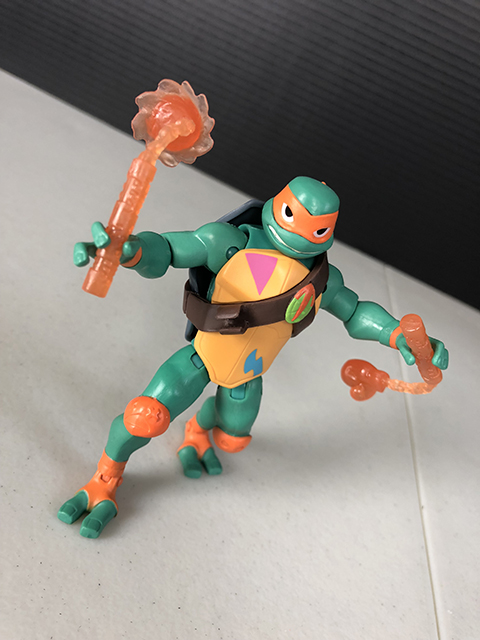 He also comes with a skateboard, totally different and larger than Leonardo's. 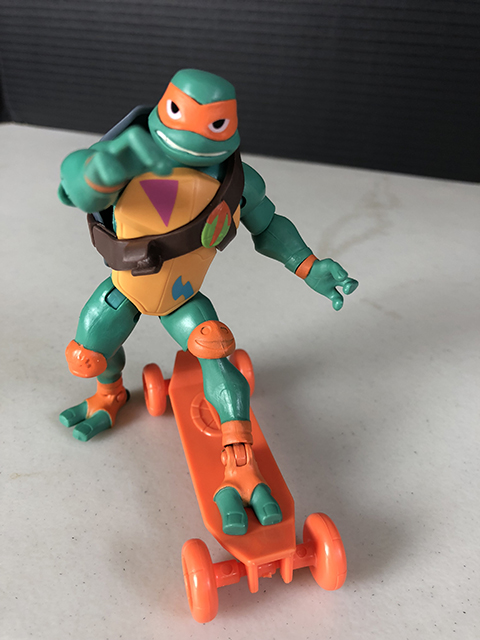 He also comes with a sheet of graffiti stickers! 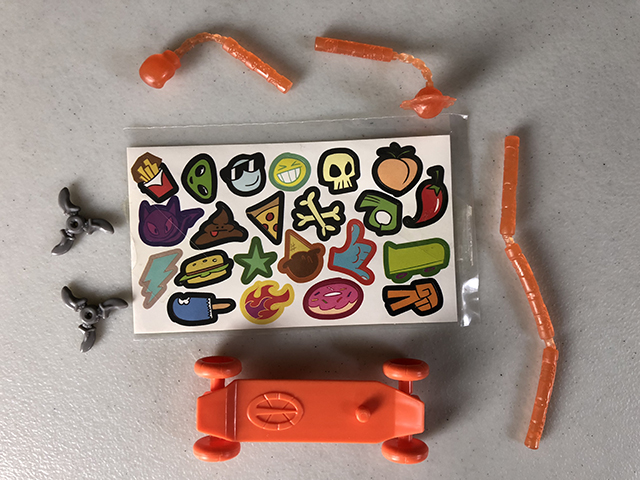 The only villain I have and looking at other choices on the box, my least favorite character, (visually at least). 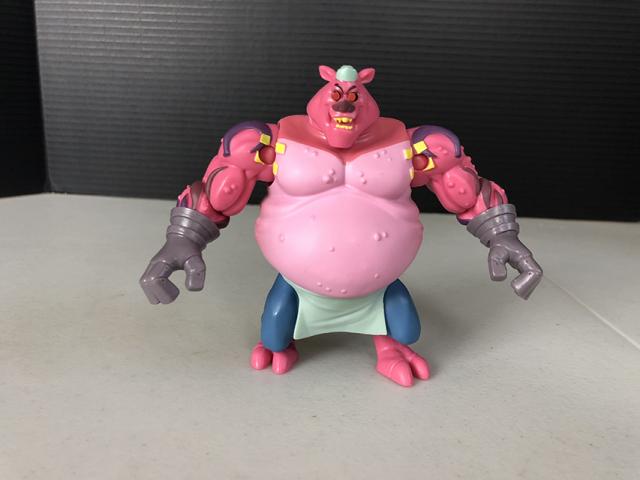 His articulation is more limited than the turtles especially the legs, he does, however, have a waist swivel. 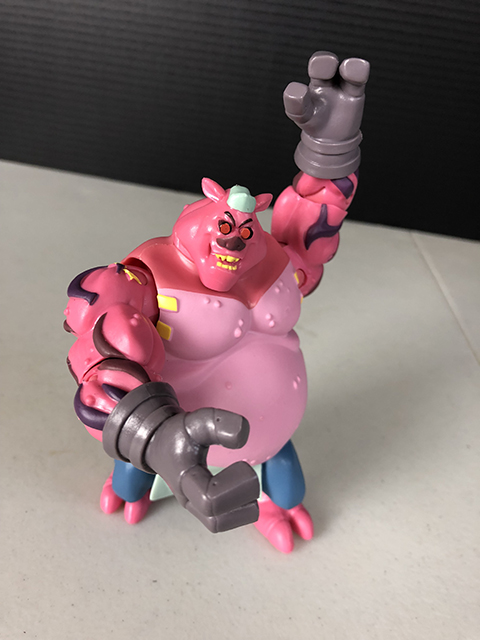 He comes with a Meat Tenderizer. 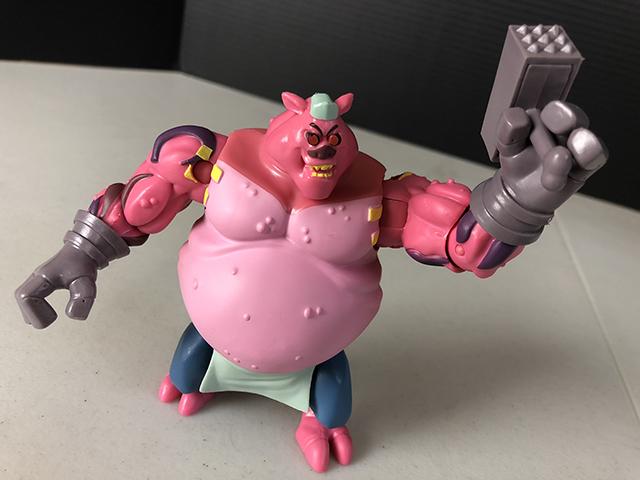 And a swappable hand with Arm Tendrils. 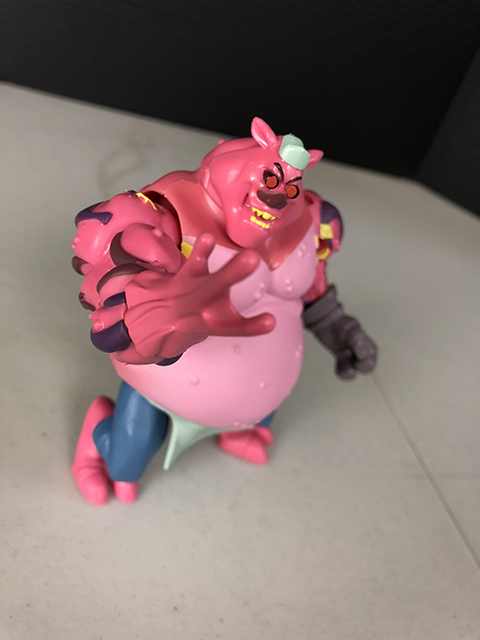 Unfortunately, it has no paint so it does not perfectly match the arms. 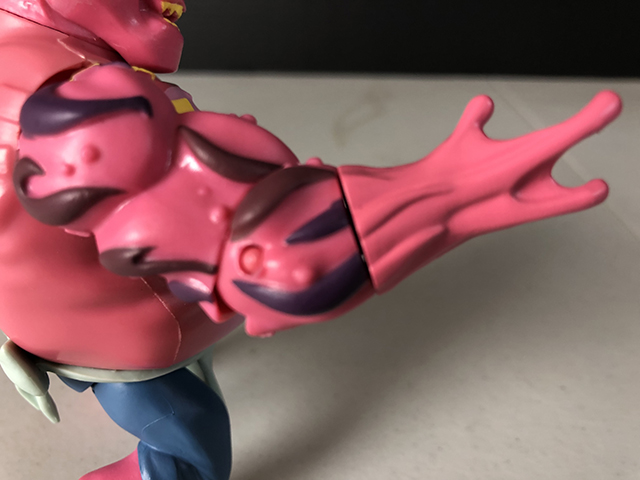 In conclusion, These figures are pretty good for the price, certainly better than the figures released for the previous show. They look bright and sharp and have a good amount of accessories. I appreciate that the molds are so different from one another. As you know, many real money casino have already added the Ninja Turtles themed slot to their game hall list. The articulation is a bit fidgety, but passable, it is worst on Leonardo's legs. Donatello is by far my favorite, in terms of his new design, accessories and the figure. Take a look if you see them in a store, even if you aren't interested in the new show, you might want to get one or more for your shelf. 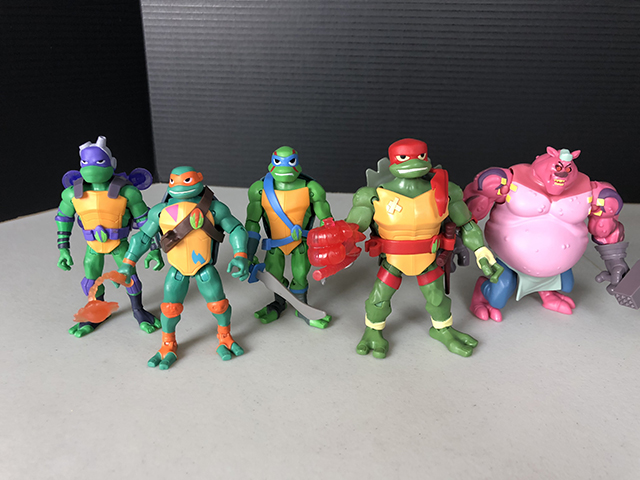 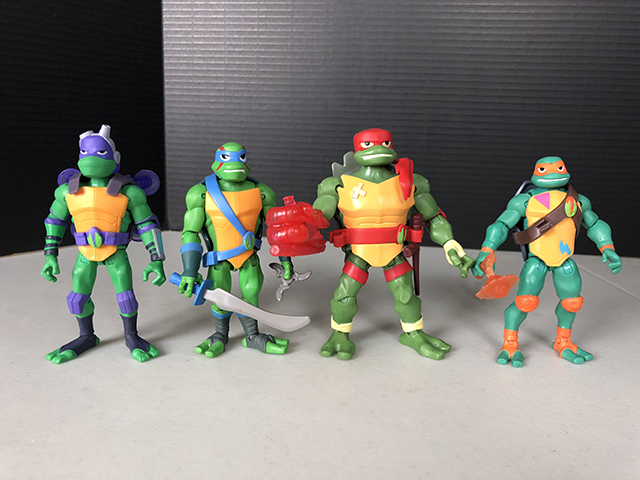 The show is hillarious!