Mattel had surprisingly few Avatar toys on display at toy fair. No toys were on hand that gave away any kind of spoilers for season three. They did say that there would be 18 figures released as part of this wave, and that there would be a Katara figure. Unfortunately, Katara is the only female figure slated for the line. 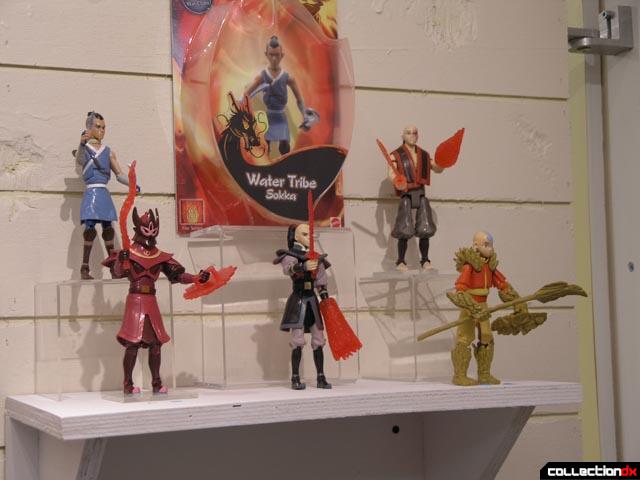 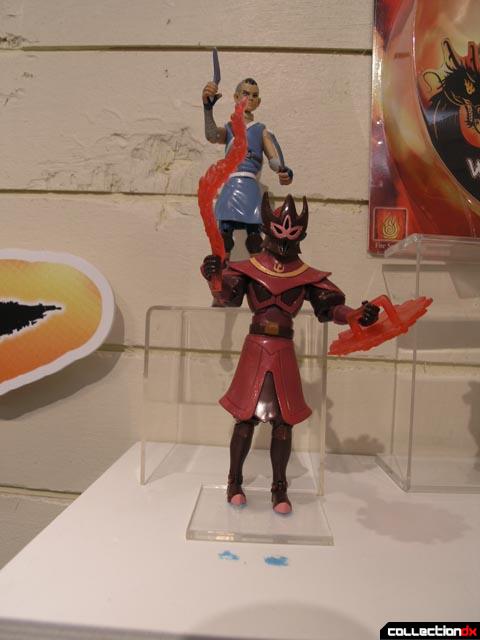 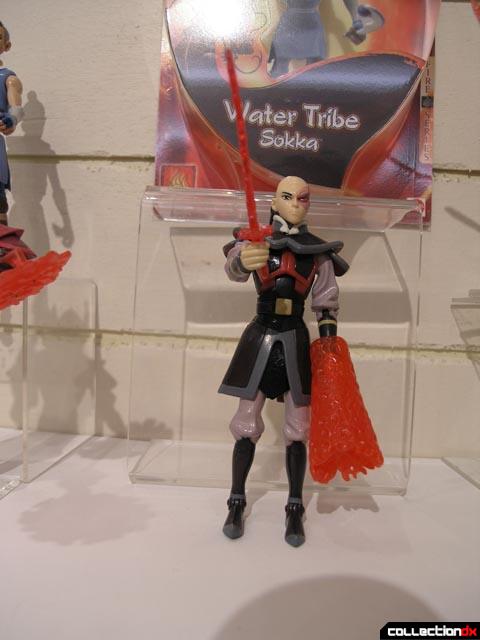 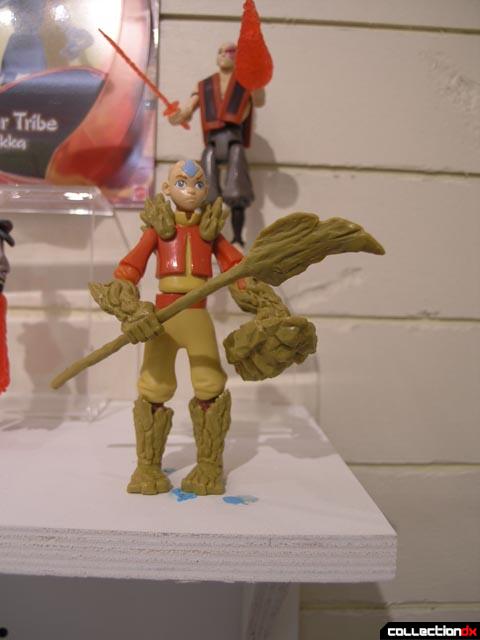 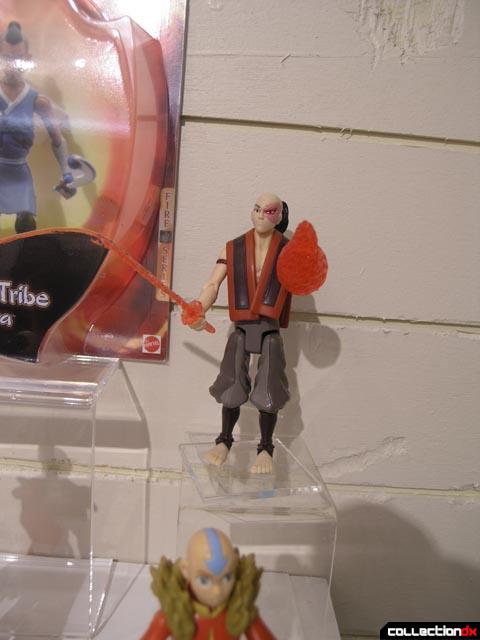 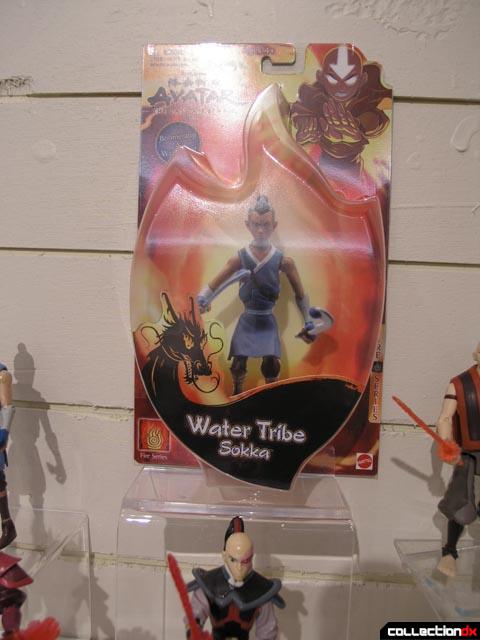 In addition to the basic figures, there are some other cool things planned for the line. First up are the Animal Armor Deluxe Figures. These figures have armor based on spirit animals of the avatar world. These armors do NOT appear in the show, they are only in toy form. Included in this line are: 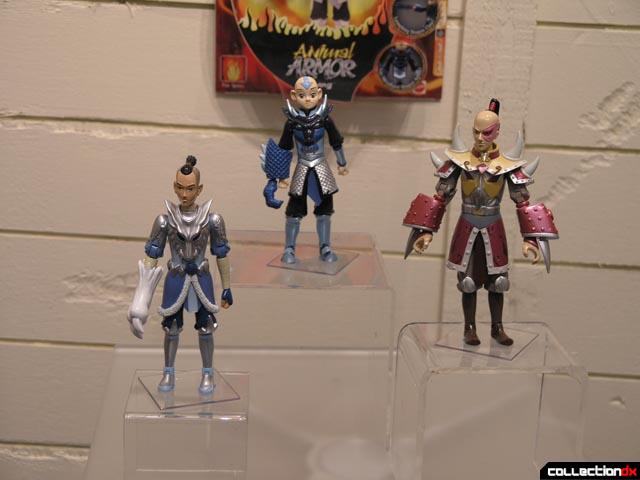 Next up we have these things called Battle launchers. Essentially what they are is launchers that you strap to your arms and you can launch either Aang or Zuko from. Those, along with their associated animals, will fly across the room at the flick of a button. Momo and the Fire Hawk will feature spiral flying action. Included are: 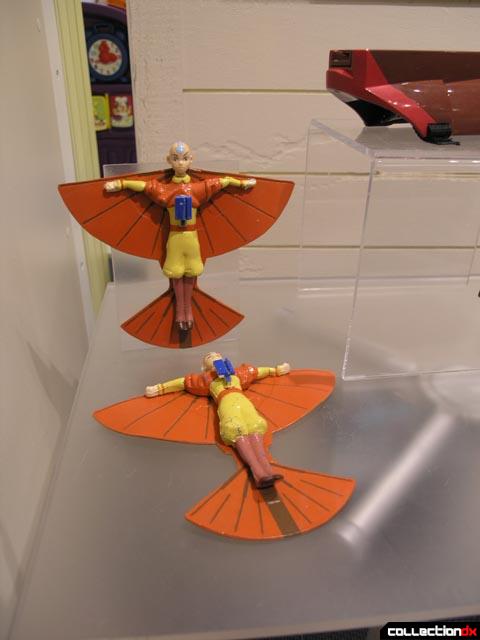 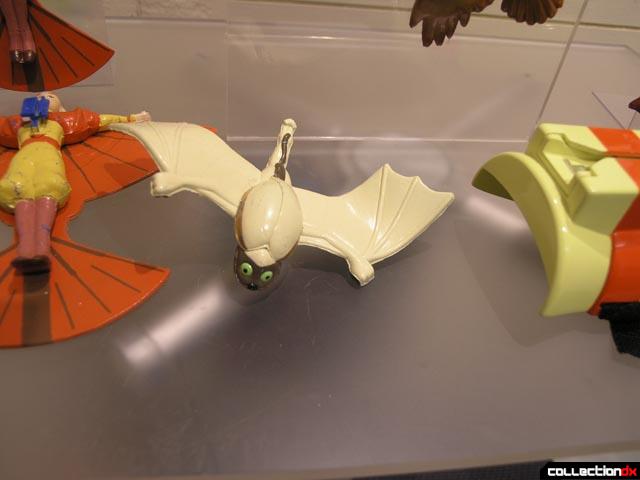 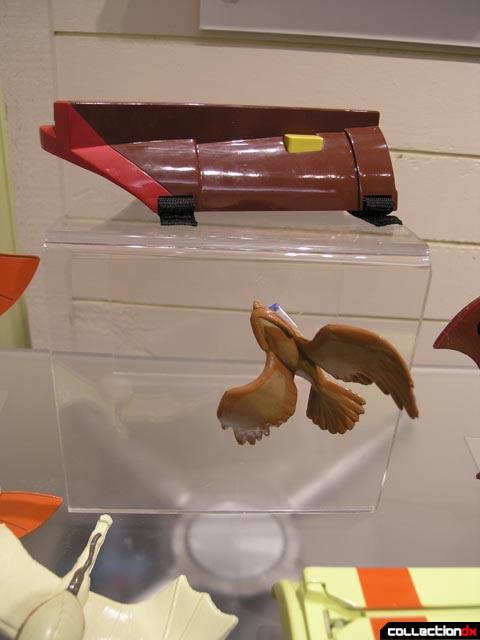 Finally, now in stores is a roleplay set called Aang’s Waterbending Blaster. In this set you get an arm blaster that can shoot either squirts of water or small projectiles with suction cup tips. Also included is an avatar mask. 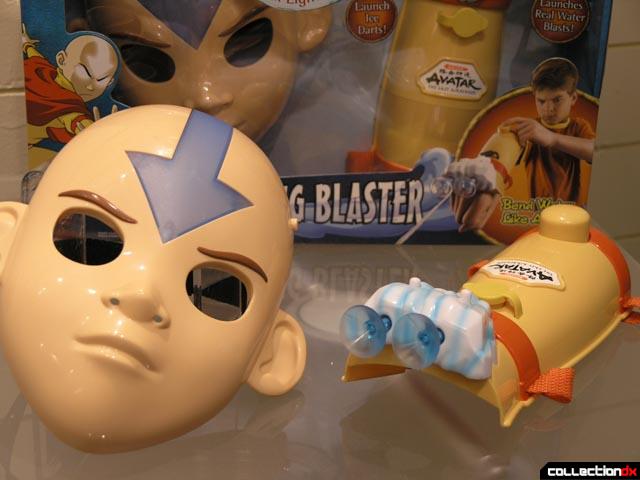 While I applaud Mattel for bringing Avatar toys to market, I still don't understand why they continue to focus this line solely to boys. The PR people at Mattel said that "Girls don't typically buy action figures" and that female figures don't sell as well. It shows me that they clearly have not looked carefully at the demographics of who watches this show. Half of the cast is female, and the show features positive female role models. Both my girls, as well as my wife, love this show. I think Mattel is stuck behind the times here. The notion that only boys like this and only girls like that is very old-fashioned. Mattel should take the lead here and extend the reach of the Avatar brand to target both boys and girls. Mattel should be breaking molds instead of enforcing stereotypes.

Regardless, I am glad I have any Avatar figures at all, but how cool would figures of Toph, Azula and the Kyoshi Warriors be?

Think about it Mattel.

Well, I just asked my almost 8 year old nephew about this. He watches the show and knows the characters. I asked him if he'd be interested in figures of the females from Avatar and he said basically "It doesn't matter. As long they have cool powers!"

Hey, new to this so bear with me... I am a Mom that has been confused as to why there are no female characters marketed?! My baby is a 6 year old boy who has been bustin my chops to get him the "girls" but I cannot get him something they don't make! Is it really true that they are finally releasing Kitara??!! what about Azula & Toff is it [the blind earthbending master]??!! I don't understand what they are thinking?! I know PLENTY of little girls who love the show & feel slighted & Actually my son is more pissed than they are! He's the type of kid that wants the WHOLE series... no matter if its a boy/girl, animal character... whatever!! They really are underestimating our children!! that just because it may be more popular with boys that the female ones wouldn't sell... just STUPID!! & also what about Uncle Iroh?? he's been a main character from the beginning!! They make King Bumi & Jet but not him??!! I don't know who is marketing this stuff but they definitely need to get a clue!!
~Jason's Mom~

I've been telling Mattel the same thing. Unfortunately lines are planned out long before they talk to me. It was confirmed that there will be Kitara among the new 18 figures, but no word on Toph or Azula. I'm sure we will see an Iroh figure. Best we as fans can do is make our opinions heard to mattel. You can send an email to Mattel Customer service to voice your concern but other than that, vote with your wallet. If Kitara sells well maybe they will see the error of their ways.

ok i have a niece who watches the show and sometiems i even watch it with her and when the first two lines came out she was confused because there was no katara but yet there was a king bumi and admiral zhao. she wrote a letter to mattel asking when or, is katara going to be in anyline of actino figures.

My sons are 9 and 4 and love the show. I know my 9 year old is very excited about a Kitara figure. Although he would LOVE to see a Toph! :)

My biggest problem is that these figures are hard to find.. Not ALL of them, but some. Right now, I can't find anything in the stores. Even online they're few and far between.... Some sites have some of the 6.99 figures listed for 20-30.00! Since we're new to the whole "Action Figure" thing, are there any good places for purchasing the figures?? I have managed to get my hands on just about all of them. I think he's missing like 3 of the figures now...

when will the toys come out, online or in store and in what stores in the uk,
so if anyone finds out about the toys please leave a note
thanks for reading

The toy line was cancelled, sorry. We will likely see them again when the live action movie comes out.

how long till the movie then

A live action film directed by M. Night Shyamalan....hopefully it's not "happening"....