Toyfair was wild. It was my first time there and did not know what to expect when I got there. It was a lot of toys, a lot of passing out business cards, and a lot of walking and my feet were screaming by the end of Monday afternoon. I was tired and cranky, and I wanted a nap. Then I saw it, a seven-inch tall exact likeness of Max von Sydow as Ming The Merciless. Oh my god! For a moment I have a complete nerdgasm, but I regained composure and had a chance to speak with Jason Lenzi, Co-Owner and Executive Vice President of Bif Bang Pow! for all the details.

Flash Gordon was a film my father and I saw at least six times in the theater when it came out. My father and I both loved it, but sadly there were never any toys made from the movie and a hole was left in my heart at the age of eight that has never been filled; until now. 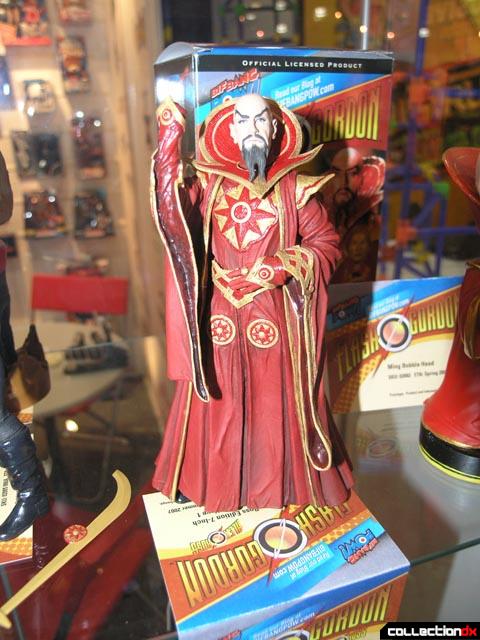 Jason explained to us that he was just as big of a fan of Flash Gordon The Movie as we were and also wanted toys from the film. Along the way Alex Ross got involved as artistic director for the seven-inch figures because he too is as big a fan of the film, going so far as to make himself custom figures when he was a kid. For those who do not know, Alex Ross is a fantastic artist known for such work as Marvels, Kingdom Come and most recently Justice. All great reads AND beautifully illustrated; if you have not given them a try, you should. Alex is the reason these figures bear such a striking resemblance to the actors who played them. 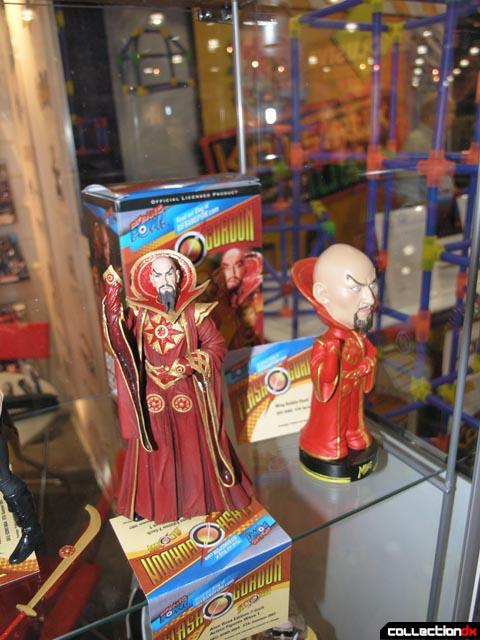 The first two figures up are Ming The Merciless and Flash Gordon. Pictured here are the standard release versions of the figures. Jason did show us photos of what would be variant versions of both characters with Ming sporting a black version of his outfit and Flash in one of his alternate t-shirts. 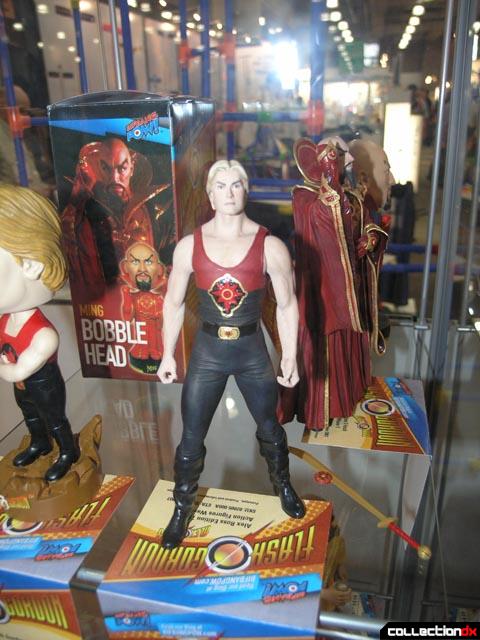 We were told that if those two figures do well we could see just about every major character from the film immortalized in seven-inch plastic. 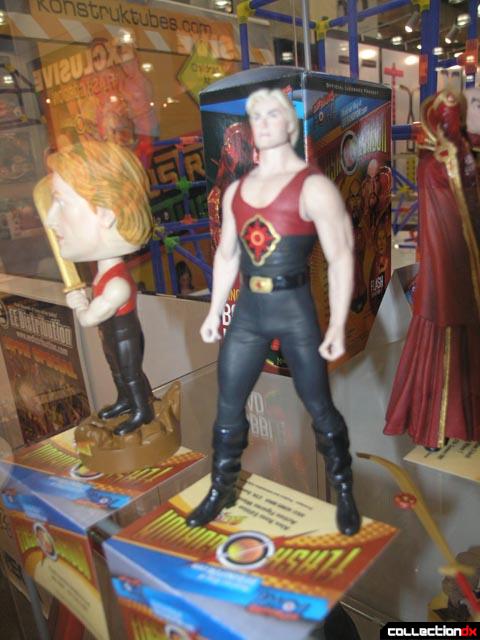 The first of the seven-inch line should be in our hands by the fall of this year. Also expected but not shown at this toy fair is a box set of smaller die-cast vehicles immortalizing such vehicles as rocket ship Ajax and Klytus’s ship. I am personally pleading with Jason to bring a Rocket sled to the lineup. 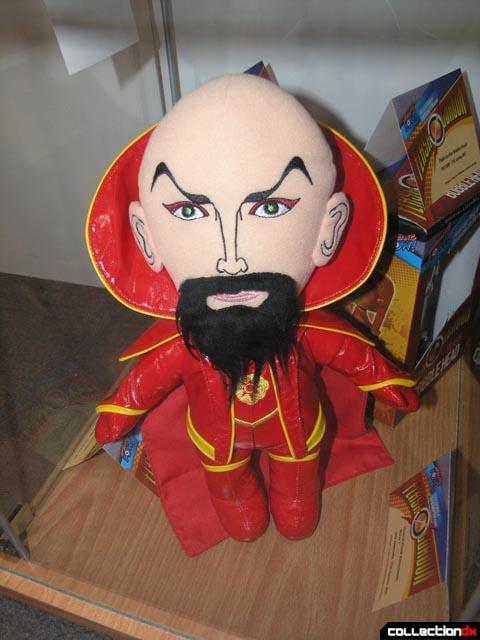 In addition to the seven-inch line they will also be doing plush dolls. Now come on who doesn’t need a cute cuddly 13-inch Ming? I know I’ve already preordered one. 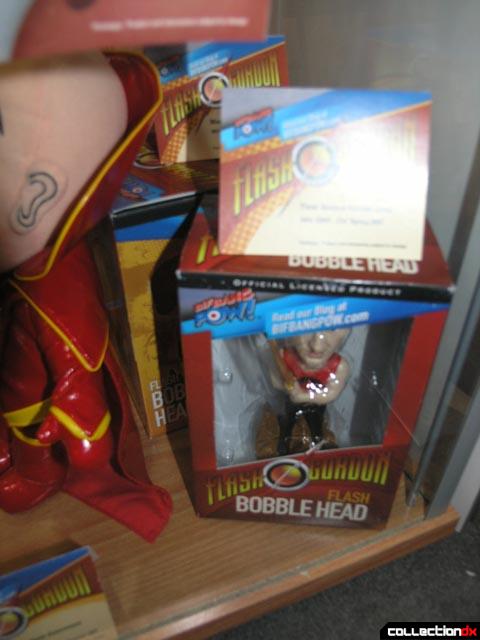 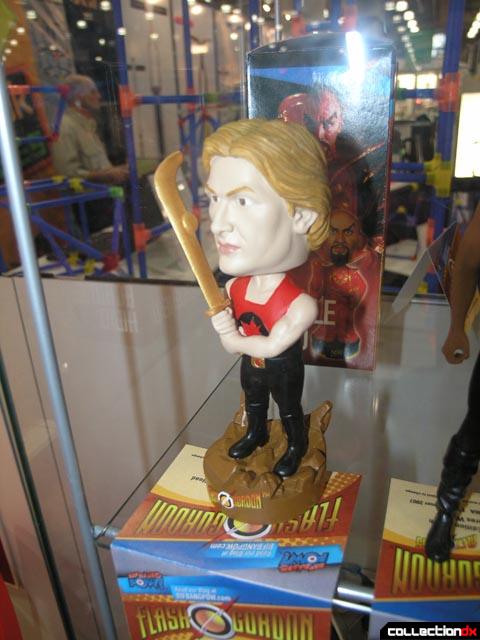 And last but by no means least there are some bobbleheads available for preorder as well.

“I’m the Dude.” Jeff Bridges spoke those immortal words and a legion of fans was born. Coen fans, your collectibles have arrived. 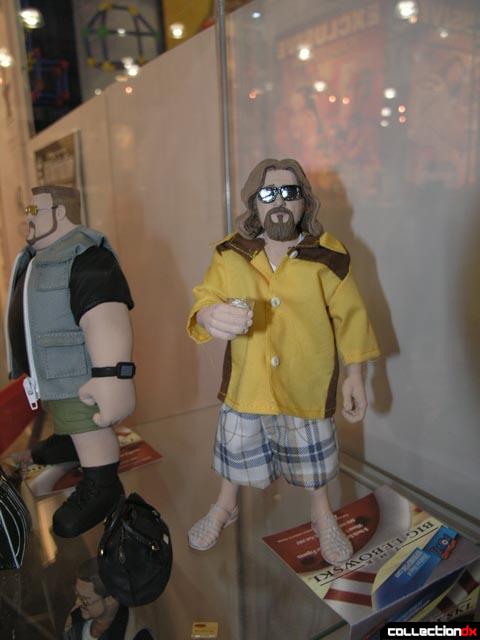 Bif Bang Pow!’s second license is for The Big Lebowski, another film that did not get a lot of love in theaters but nonetheless has a legion of diehard fans. A truly clever, fun film that gets funnier upon repeat viewing. 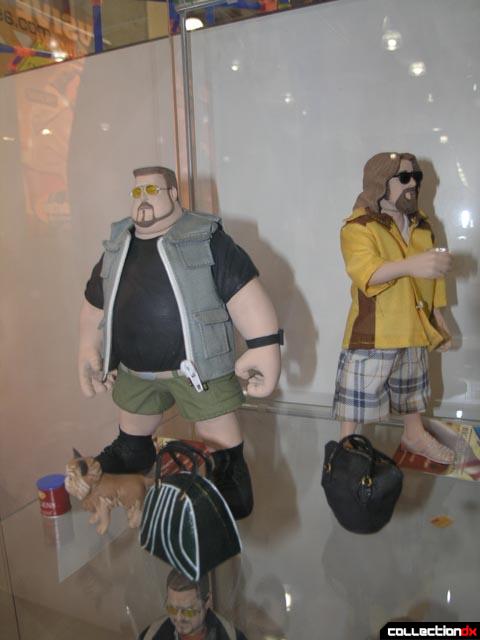 They are doing two figure lines and a set of bobbleheads as well. Pictured here are their eight-inch vinyl figures which sport a very nice animated look to them. 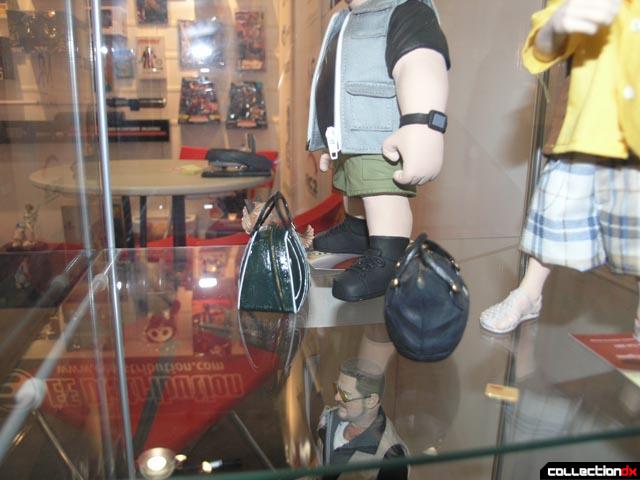 The figures come with lots of movie-related accessories sure to please any fan of “The Dude”. Jason told us they were inspired by the urban vinyl scene and wanted to do something with that style. Judging by these prototypes I’d say they have succeeded. 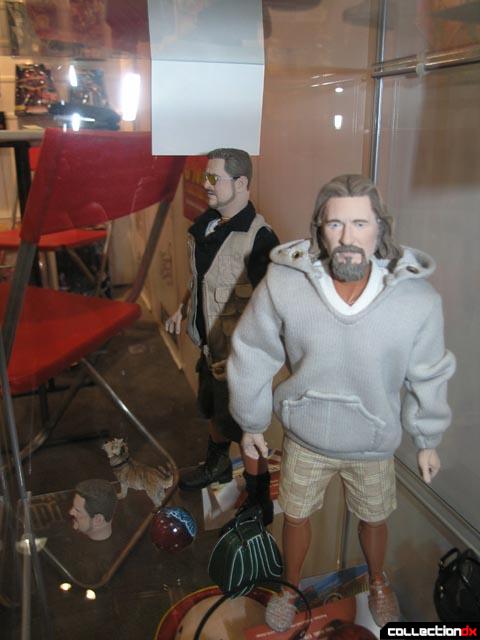 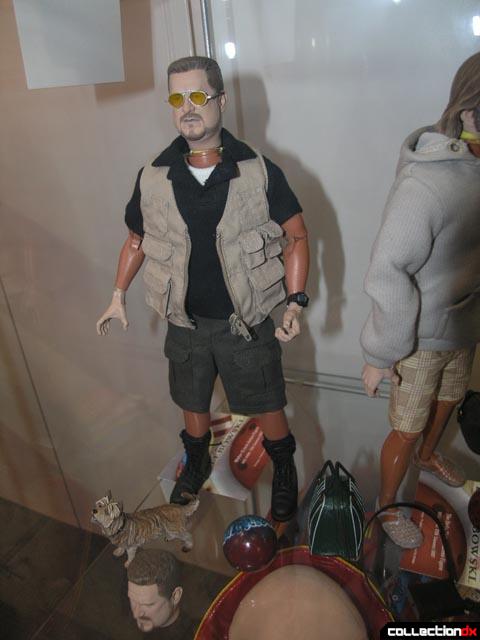 Also on display where twelve-inch figures equipped with copious amounts of movie-related accessories. These are sure to be a winner with fans of the film. 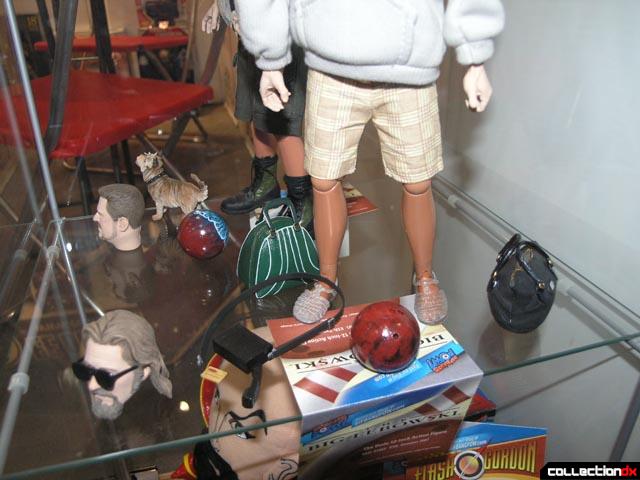 Please note the figures are prototypes and the discoloration between head and body will not be there in the production run.

There are also bobble heads due for The Big Lebowski and can actually be preordered as well now.

We were so excited about the lines we went back the next day and got an interview and video footage for you, which you can watch below.

Jason Lenzi was a great guy and I enjoyed speaking with him and I look forward to supporting his company and his product. It is nice to see a fellow fan bringing such great properties to the toy industry.

You can follow all the news with Bif Bang Pow! by checking out their blog. Support these folks and buy their stuff. I want a rocket cycle people!