The vibe at Bandai was really different this year. Due to the lease expiring at the toy center building, many companies had to shuffle around and find different spaces to exhibit their wares. Bandai decided to set up in a hotel this year that was only a few blocks from where we were staying.

Bandai, always the gracious hosts, treated us to a nice spread of sandwiches and deserts. We had some time to chat with the PR people and even people from Bandai directly.

Once we got into the showroom we were shown the three main lines for boys for 2007. This article will focus on the biggest brand, Power Rangers. 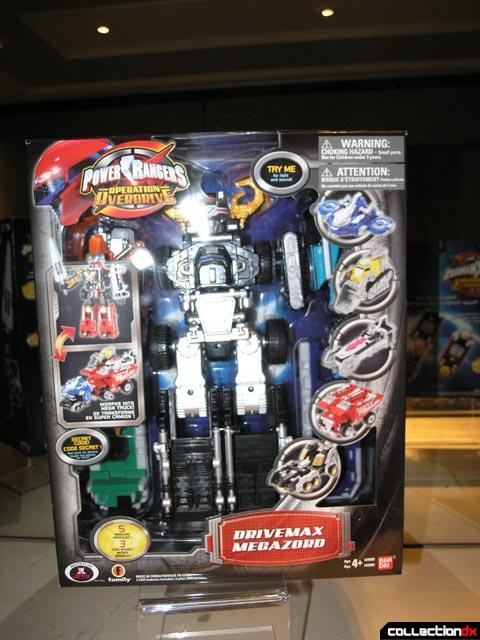 First off, they had the latest Megazord on display, the Dual Drive megazord. It was shown in the Drive Max Megazord packaging, but a press photo shows the final product. I spoke directly to the Bandai rep there about the fan outrage regarding the new megazords. They said they were aware of the issue and have had meetings solely about it. The consensus is that what's done is done, and at this stage of the game they can't change anything. No word whether or not we will see ALL the vehicles in this scale. 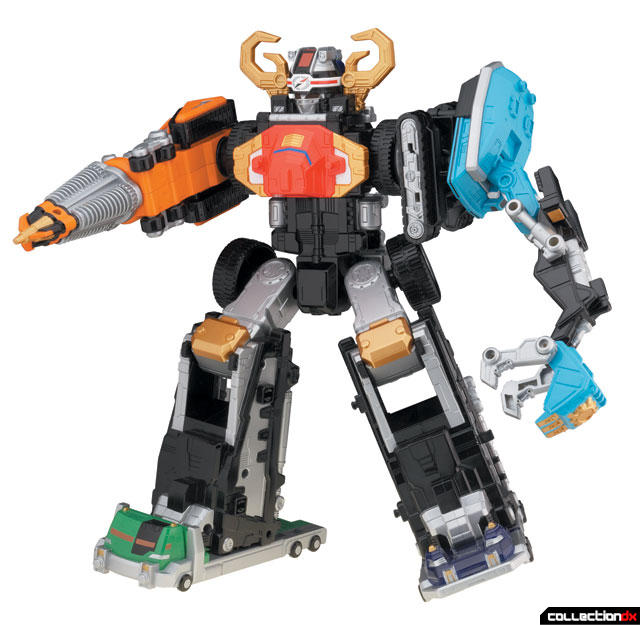 Bandai confirmed there will be a store exclusive, but were unable to disclose what toy or at what location.

The previously released Jumbo Red Ranger will be the only Jumbo released in this line, but future lines will have Jumbos in them. I said that people really like the megazords over the characters. This led into an interesting discussion about how different the US and Japanese markets are. Bandai said that the Japanese market was focused around the Megazord's while the US market was focused on the figures. The US versions had to be re-tooled because they felt that at the $39.99 price point the toy should have been bigger and had more play value (ie light and sound).

There were a few things on display that we were not allowed to take pictures of. First was the Mission Response Vehicle Playset. This playset is a giant red truck that features lights, sounds and missile launchers. You can also place 5" Mission Response action figures on the sensors in the cockpits to activate sounds and phrases in the figures. Also on display was the Mega Misssion Helmet. This is a really nice, almost show-replica helmet (not a mask, a HELMET) that you can plug into your computer via a USB hub and download missions. The missions will then play inside of the helmet (audio only) so you can re-enact your favorite missions.

Finally, for the 15th anniversary of Power Rangers, Bandai announced that they are releasing all 15 6.5" action figures in their classic paint schemes. Also to be released are three 5" figure sets that span the history of the line and come five in a package. 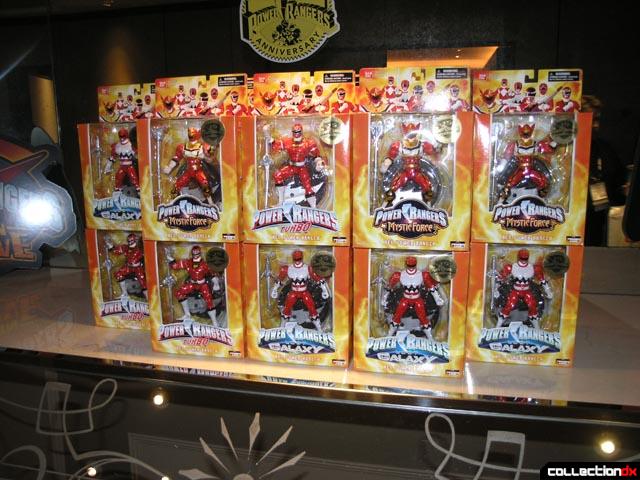 Easy solution then...release Jumbo Megazords in Japan! Hell, I'll pay the shipping if I have to, if it means I'll get some more jumbo ROBOTS. And who knows? Maybe they would even be received better in Japan than they were here.

Hmm... I can easily believe that it is too late to change the toys as they are- production is already in full swing by now, and I suppose to re-tool in order to give us the modified versions of the original Gougou Vehicles from "Gougou Sentai Boukenger" (2006) would put them way behind in releases, not to mention be way too expensive to implement at this late stage. I think that they should hurry and create a line for modified Gougou Vehicles, but then call them "Special Edition" or something. Remember when the DX Gingaioh was released as a special-edition version of the Deluxe Galaxy Megazord years ago as a store exclusive? They could do the same thing here!
.
As we can see here, Gougou Drill, Gougou Shovel, Gougou Mixer, and Gougou Crane have already been reinvented (as we can see here, already with heavy loss of function each) to work with the Deluxe DMM as seen by that second image above. Why are they releasing it as a separate set? Why not treat the four vehicles as an accessory set which can be added on to the DMM!? That would certainly make more sense and be cheaper than including a black-and-silver Dump Driver Zord repaint!

At this rate, I'm sure they won't remake the motorized DX DaiVoyager because of size and compatibillity issues, though they may still release a remake of the DX Siren Builder. here's my question: will Gougou Jet be remade to fit the DMM? And if so, will it be able to form the DaiTanken equivalent? (I'm guessing no to the latter...)
.
I'm glad to hear that they have been meeting about this rather than just letting it fizzle out; I doubt that will happen any time soon!
.
Josh, did they tell you why they did this to the Deluxe megazords this year instead of modifying them like they always have before?
.
Ugh- Another repaint of the same old, boring semi-trailer truck playset that will never appear in the show!? They've used that same design for four years in a row- starting in 2003 with "Power Rangers Ninja Storm"! And the only time it appeared in the show was in the last two episodes of "Power Rangers Dino Thunder"!
.
That Mega Mission Helmet sounds interesting- kinda like their responce to the tiny DX Bouken Driver interactive game set that works with your TV in Japan. May not fit my cranium, but I'd like to know a little more about it.
.
I think there's a very good reason that there's a difference in the choices of the two markets, mecha VS. figures- BA doesn't give us a choice in what we get!
While I like that BA is acknowledging long-time fans and collectors with the 15 Red Rangers, couldn't they at least customize each one's mold instead of just changing paint apps? It's very obvious, but seeing as I won't be getting them, I suppose I have little room to comment let alone complain, huh?

Well the same thing happens with other lines.

With Transformers Energon Hasbro gave us the first Open face Prime since Primal and then they shifted gears half way through and gave us a closed face Prime like the Japanese version, but thats just a head on an already scale mold. And then Cybertron we got the 'giant' Starscream who had just as much (if that) detail as its much smaller, sharper form. And like this Megazord, The gigantic version only loses some of the detail and can't get out of its own way.

I think Bandai has no choice but to just do what they can with what they've done concerning the Megazord. they made the mold, now they've got no choice but to use it, scrapping it now would only hurt them. a Recall won't work because of the ones already sold, and the whole process of changing out for the imported version would only set the series' launch back. For what we know they made the US version more kid friendly but not collector friendly. Yeah the size makes it more appealing, but it loses the detail value seen with smaller molds. During the Mystic Force line they skipped out on the Wolf Knight Megazord and instead gave us the Megazord that only got a limited release in Japan, it makes for some nice US-Exclusive, but the Completists have to import. I think Operation Overdrive is one of those times where Bandai america wants to distinguish itself from Bandai Japan by having its own molds to run with. The whole scale up idea works with Jumbos but it hurts (See Starscream).
Now the whole figure thing has always been out of hand. I don't ever remember seeing any 'evil Ranger' toys with more than three to five points of articulation compared to all the ranger figures with more than the standard full body articulation. Now with sculpters taking a more comic book aesthetic approach, Rangers are getting rippled abs, busting biceps, and overly defined crotches. With the increase in quality, Bandai's got no choice but to rely on remolding the same bodies for every figure. Jakks Pacific has gotten by with the same process with their WWE figures even when they don't match up. Best example I know is Tazz (former ECW heavyweight, shaped like a bowling ball in real life) is molded on the exact same body used to make Vince McMahon (tall, heavy chested, broad shoulders).

Bandai's been on thin Ice with me since the whole Gundam disaster (I think its safe to call it that). It hurt me, I mean hiking prices of the kits for box size, 80$ for the GP-02 locally compared to 45$ with shipping via importer. The change from 'domestic striping' to the ugly box jobs on some of the SEED kits, and need I say anything about the whole Battle Damaged MSIA line that ended it.

I don't know, it doesn't look to me like kids are going crazy for the Jumbo Rangers....

Oh- that's just funny! There's a whole stack of Deluxe Manticore Megazords bigger than that at TRUs near where I live...
.
Hee hee hee hee... ^_^

Did a search for "Manticore" to see if you had reviewed it and came back to this thread. I can see why there was a pretty big stack of them. It is on clearance at TRU for $11 so I figured I'd grab one. It's really quite lame and ugly. The legs are a big mess. Why would anyone even want a robot with the legs fused together like that? It looks terrible and doesn't have anywhere near the play value of other DX Megazords I've seen.

Yep. Well, that's why I'm not getting one- it's ugly and it don't do much! (You'll probably never see me covering one for CDX.)

Bandai has released other mecha before in the Super Sentai saga with the legs fused together. How popular they are I couldn't say, but this trend mostly stays with the larger carriers-

There are also at least a dozen regular-sized mecha and combos which have fused legs. With some of these, it's obvious that separated legs would have been quite technically challenging to develop let alone sell at a reasonable price. For others- like the DaiVoyager- it's a real head scratcher!
------------------------------
CollectionDX Staff