NYTF06: The Truth about Toy Fair

Now that Toy Fair is over and done, I thought I would talk a little bit about the experience. I know that before I went to Toy Fair, I had a lot of misconceptions about what the experience was really about.

Because I live in Boston, I typically drive into New York City for the fair. But I had heard that there was some snow coming in that weekend. I decided to leave a bit early and beat the snow. Luckily I made it into the city with no problems. I met up with Roger and checked into the Gershwin Hotel.

The Gershwin Hotel is conveniently located just a few blocks away from the Toy District, and is actually right next door to the Museum of Sex. 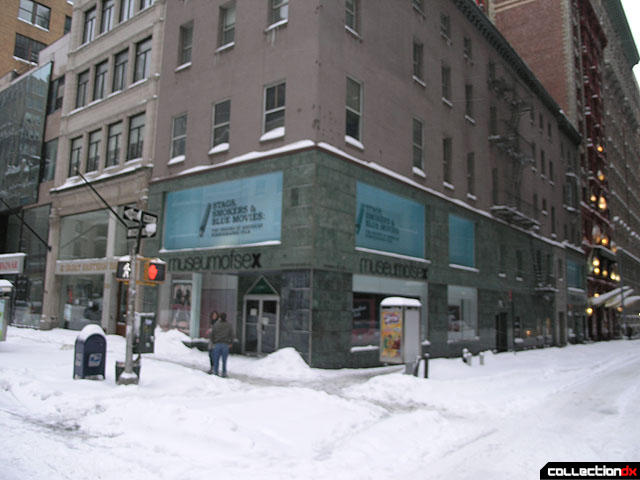 The hotel itself is a grand red building, with giant glass sculptures sticking out of the front. It is an odd hotel '“ there is art everywhere, and it has a really funky bohemian vibe, but if you are looking for creature comforts, this is not the place for you. 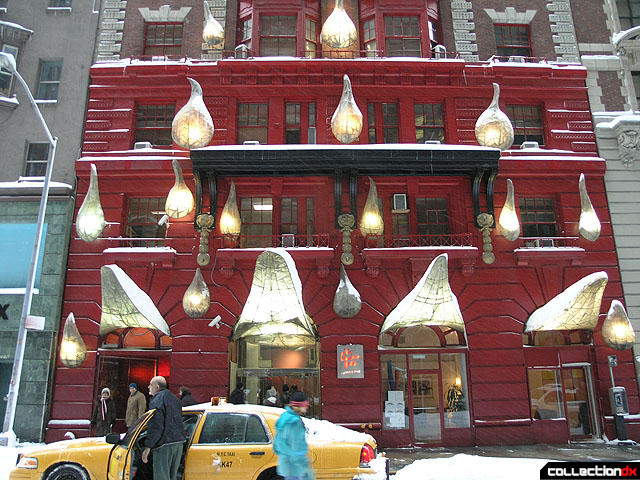 Our floor was decorated with giant images of elderly men in Superman outfits and burger king crowns. 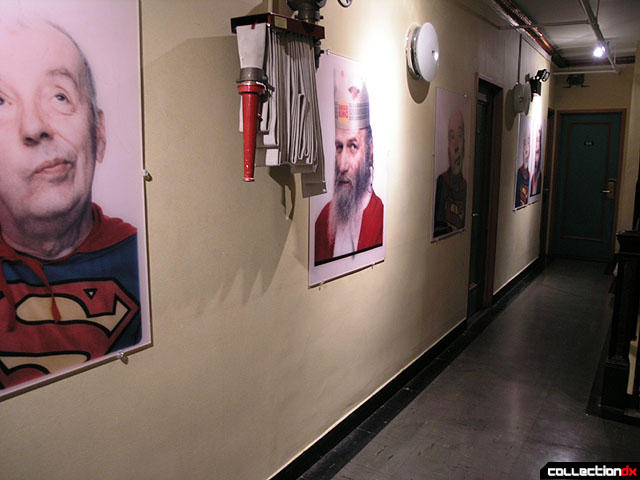 The hotel didn't have a bar or a restaurant, and the wireless internet was a pain to get working. In the bathroom, the hot water was messed up, so that you only got blisteringly hot water, and the latch to the bathroom window was broken, so cold air got in. The walls were exceptionally thin, as I could hear the hold music from some guy trying to contact his credit card company at 3 in the morning.

Our first appointment was at one of the showrooms. What people don't seem to understand is the process behind these meetings. First off, you don't get into the big names without an appointment, made months in advance. Usually you are first greeted with a 'œand you are'¦'¦?'-type of attitude and you really have to sell yourself to whichever PR company you are dealing with. Once you get to your appointment, you are greeted by hired help from the PR Company, who usher you into the showroom. In the past, you could just get a solo appointment, whenever they could fit you in. But now, due to the number of internet and collector media covering these events, the big companies have 'œCollector Media Showroom Hours'. Sites like ours get a 2-hour window to come by and fight through the mobs of other media representatives. It really is a feeding frenzy. There is always at least one actual representative from the company present, but most people there are hired hands who only learned about the lines an hour before you arrived. The one good thing about these collector feeding frenzies is that you get a chance to rub elbows with some of your peers. I met people from Figures.com and Action-Figure.com. Also, I saw someone from Action-Figure-Collectors, and well, you get the idea.

Most of the toys on display at these events are prototypes and will vary from the final product. Often they are actually broken, or in the case of transformers, mis-transformed. As a rule, you are not allowed to touch the toys, but it never hurts to ask.

Toy Fair is essentially held in two locations '“ the Toy District and the Javitz Center. Normally you could just take the free shuttle bus but that wasn't happening this weekend.

After our first showroom, we went back to the hotel, unpacked our stuff, and went out to hit the usual toy stores and then dinner in Chinatown. 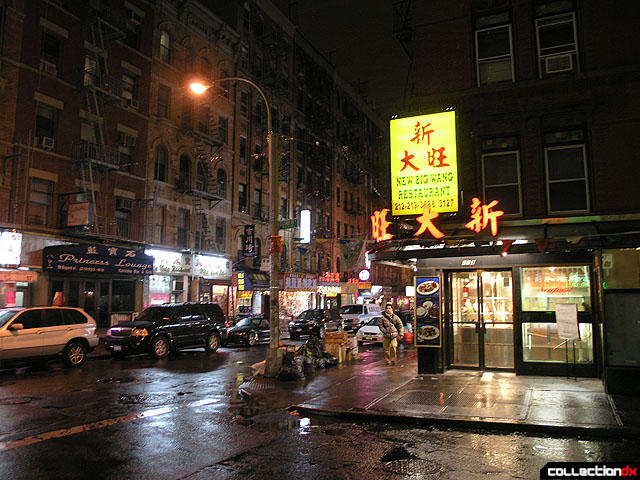 Later on we got drinks at this little bar on 27th. The waitress was cute, and made a mean Mojito She was from Massachusetts as well. We drank a bit too much, and by the time we stumbled out into the street, snow began to fall.

Back at the hotel, sleeping was rough. Thunder snow and hurricane force winds kept me awake. Morning brought a mild hangover that coffee quickly vanquished. As we left the hotel for our appointments at Javits, the city looked like a scene right out of 'œThe Day After Tomorrow'. 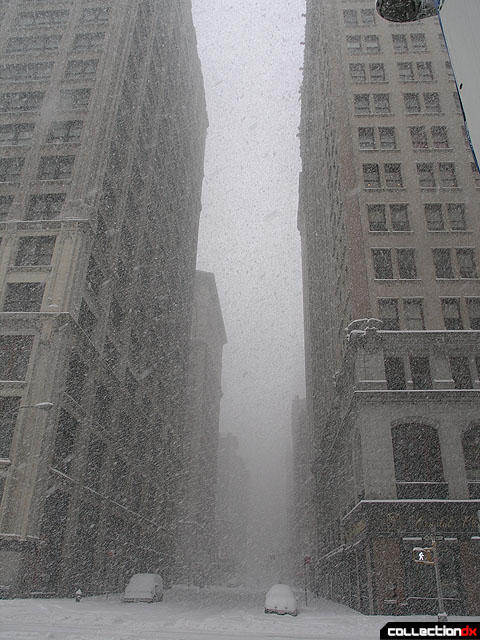 Everything was white, the streets were silent, not a car or snowplow to be seen. As we walked towards the Toy District, we saw flashing lights and smoke. A cab had caught on fire outside the building. 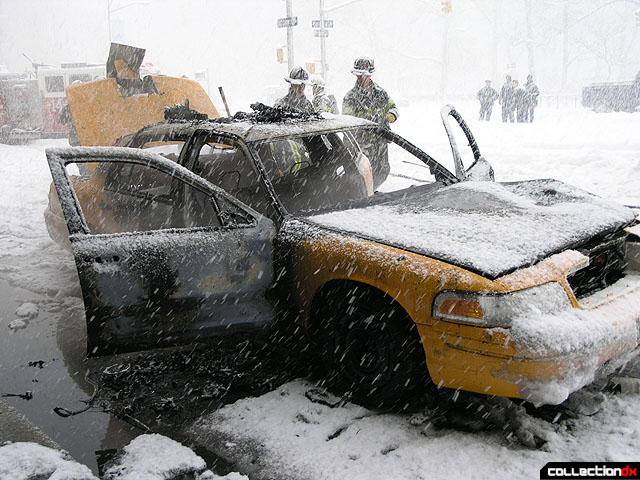 After a quick bite to eat in the cafÃ© at the Toy Center, we waited in line for the shuttle bus. And we waited. And waited. After about a half an hour it was clear that no shuttle bus was coming. We hailed a cab, who only agreed to take us to Javitz if we gave him a good tip.

The scene at the Javitz center is a totally different experience than at a showroom. First, you have to go register at the press desk, where there is coffee, pastry and free internet. From this space you get a good idea of the scope of toy fair, all 1.8 million square feet of it. Luckily, exhibitors all grouped by type, so you only go where you need to. 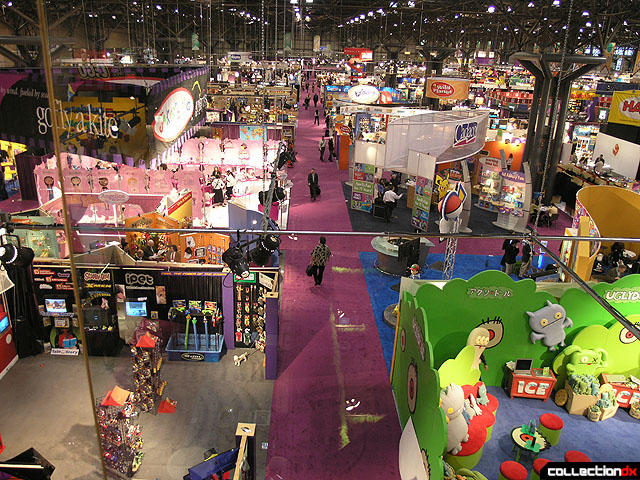 As we walked onto the floor, we noticed how quiet it was. Because of the snow, people were delayed. The good news was that it was less crowded; the bad news was that the exhibitors were more desperate. The second you made eye contact with someone, the pitch began. The smaller companies don't care who you are, they can spot a media badge from a mile away. As CollectionDX is a highly focused site, most things here don't apply to us, and you just get so tired of telling people that you just don't cover that sort of thing, no matter how neat it is.

I am now in my fourth year of covering toy Fair, and people are beginning to remember my name, and the company's name. Toy Fair now seems like equal parts catching up with old friends as it is covering toy companies. Some companies are very much not in the scope of CollectionDX, but I continue to cover them because I believe in their product and I like them as people.

'œBut what about the schwag?' You ask. Well, things were a bit slim this year. The goodie bags given out at Toy Fair were practically empty. Hasbro had little bins in their showroom where you could grab a gold Titanium Darth Vader Tie Fighter and a few Attacktix figures. Mattel stepped up to the plate with a bag full of goodies, including a Batman figure, Bane figure, several comics and even some manga. But that's about it. Overall, Toy Fair seemed slimmer this year. Exhibitors had fewer products, giveaways were few, and eviction notices filled the Toy Center building.

It is an interesting experience, if you look at it as an adventure, and a study in the goings-on behind consumer culture.

We'll do it again next year, I'm sure. 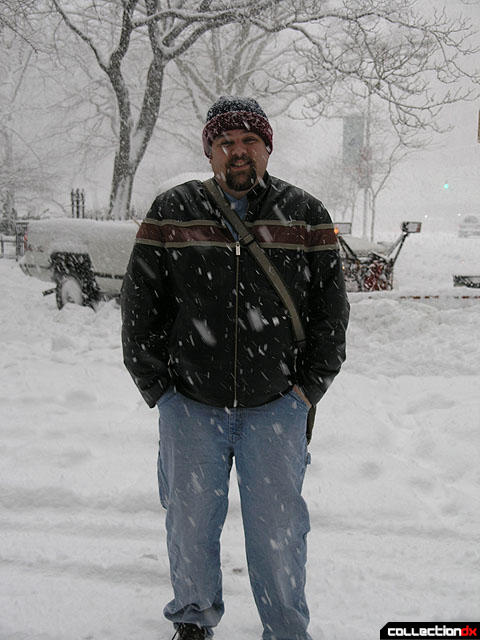 ...snorer is as snorer does. Or something.

Those gold Titanium TIE Fighters are going for $100-150 on the 'bay right now.

Maybe I should unload my tie fighter while the getting is good...

whats your thoughts on toy fairs to come? was it just missing a bit this year or is there a trend you're noticing over the last 4 years? Any other similar exhibitions to look out for in the future that compare or is NYTF the one to check out? have you ever been to japan, china or korea?

Well, I'll continue to go to toy fair as long as they invite me. I think future toy fairs will be scaled down a bit until the economy gets stronger. I hope there will be more japanese toys there, but Unfortunately I think theres not the mass market for them. There will always be star wars and Power Rangers though!

I'm actually in Tokyo right now, toy shopping and having a blast. Never been to china or korea though...

nice one, i just got back from a 3 day visit to tokyo in early feb. i just had to go, was nowhere near my actual destination of canada (visiting friends for xmas) but just threw it into the plans! spent a lot of time in dept stores where the sheer size of the 'cool' toy section was about the size of the whole toys r us store here in west australia! spun me right out but i was there for the markets. heard there were all sorts of used toys for sale market style but couldnt really find what i was after. learnt a lot though - take heaps of US dollars or yen (not all credit cards work!), learn some japanese coz no one speaks english, get good maps and know where you wanna go, dont get lost on subways and get where you wanna get early coz theyre not open 24/7!!

cool place - was raining the whole time i was there tho - but really cool. I will be prepared next time and there will be a next time! Have a great time and keep living the dream while you can!

Thanks for collectionDX! your collection is inspirational to say the least..