While I have cultural knowledge of Five Nights at Freddy's, I've never played the game. It was that game with animatronic characters that kill you after dark, you know, the one all the kids like. My niece was into it for a bit, but she grew out of it.

I'm not a gamer. I'm too old, my reaction time isn't as good as it should be, and most games nowadays seem like running errands. (Collect the parts to build the tool to open the door to go see a guy who sends you on more errands and by the way kill anyone you meet.)

They say that when life gives you lemons, make lemonade. Well, when Funko sends you samples you weren't expecting... you make reviews. So that's how I ended up with the entire set of Funko Five Nights at Freddy's: Pizzeria Simulator action figures.

In preparation for this review, I decided to watch FNAF: PS (that's what the cool kids call it), and I really wish I hadn't. I stumbled across a "lets play" on YouTube, with some guy in the corner of the screen over-reacting to everything and making bad jokes through the entirety of it. 9 million views. I had to mute it, and then I just sort of gave up. I've been reviewing toys for 18 years, I don't have time to watch some jackass make faces in the corner of a sub-par video game like he doesn't know what's going to happen.

The toys are actually really nice. Each is about 4-5 inches tall, fully articulated, comes with accessories and a part for the build-a-figure.

Each figure is also MODULAR, which I was not expecting. The arms and legs have pop-apart joints, so you can mix and match parts across different figures. So there is a lot of play value in here as well. The short of it is if you like the game, you will like the figures. If you've never played the game before, the figures are still cool., but your mileage may vary. My favorite of the bunch is the build-a-figure, Scrap Baby. Let's get into it!

If you are into these, you can get the set at Amazon.com

He's a Beaver character, wearing a sombrero and playing the mandolin. These guys are supposed to be life-size animatronics at a pizza parlor who come alive at night and try to kill you. If I encountered one of these in real life, I would, in fact, shit my pants. 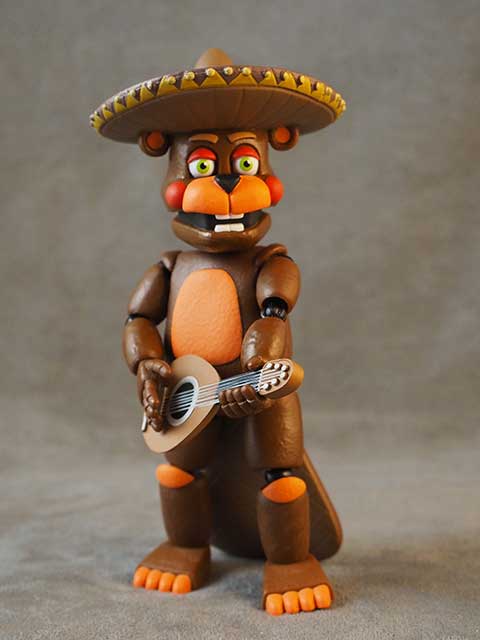 I assume there's a regular Foxy out there? Foxy is a pirate fox, who plays the accordion. The bird on his shoulder is not removable, and he's a bit of a pain to stand due to the peg leg. 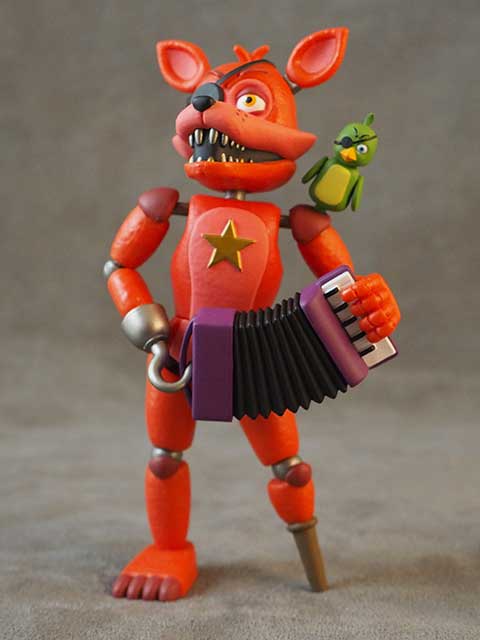 The mascot of the series, Freddy Fazbear, only a Rockstar version. He comes with a microphone. 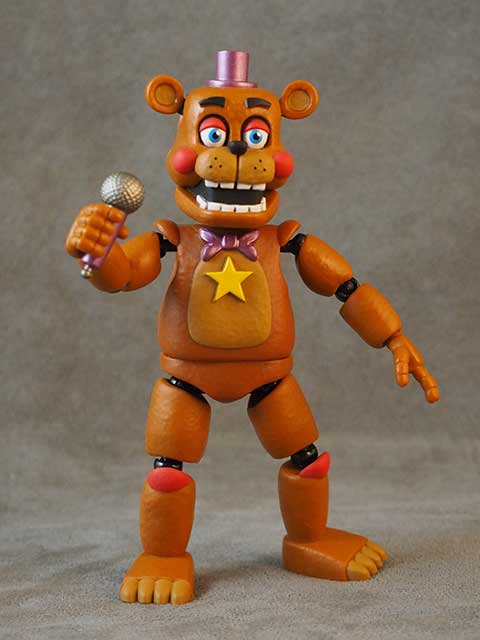 I can't tell if he's holding a magic wand or a conductor's baton. Either way, that's what he comes with. 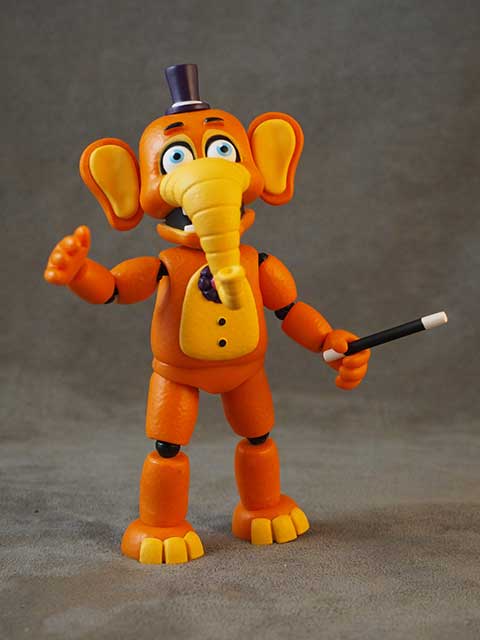 Pigpatch has a banjo because banjos are terrifying. Nothing good comes after hearing a banjo unless Steve Martin walks on stage. 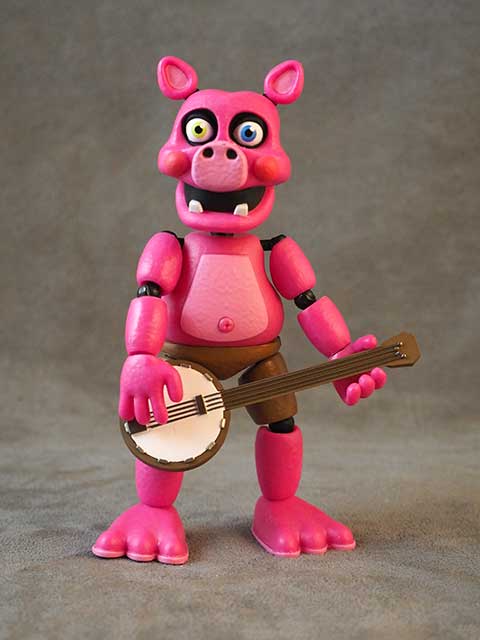 I think Lefty is supposed to be a more evil version of Freddy? No idea. Either way, he is a Wal-Mart exclusive and does NOT feature any build-a-figure parts 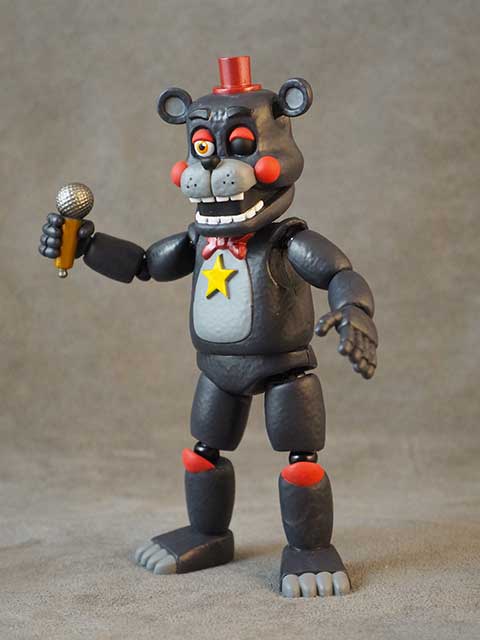 This figure is great but sadly you only get her if you buy all the others, because she is the build-a-figure. Easily the coolest looking one of the lot. 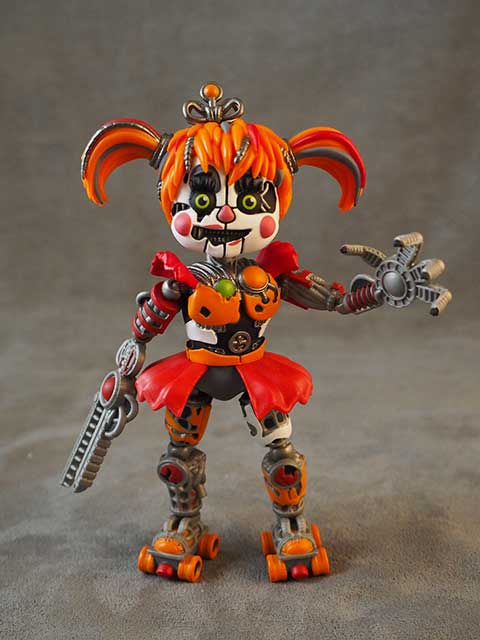 I mentioned the modular aspect of these toys, well even the buld-a-figure parts are modular and can be swapped out. 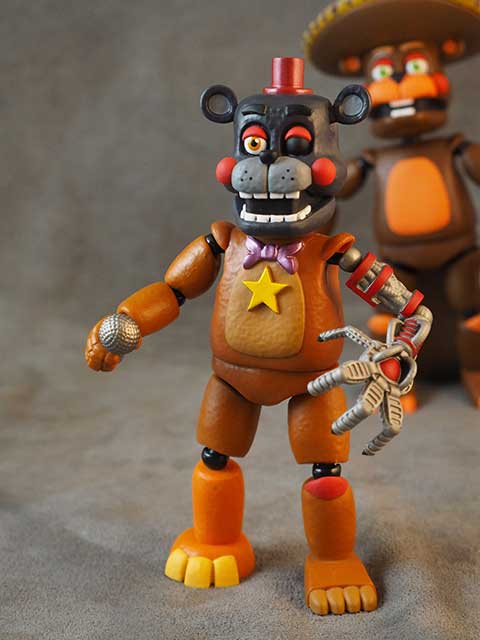 If you are into these, you can get the set at Amazon.com

Thanks again to Funko for the review samples.