So, there was this little get-together these guys would have once a year at one of their houses. And they would share stories, the latest rumors, toys, books, and food. A nice little yearly summit between friends. Then after six years of this, the summit got a little bigger because friends were bringing friends, and then the friends were bringing friends... And so, to expand the exposure of the public to the venue, they decided to move into a small convention center. They weren’t looking to become a huge annual event, but still a get-together where people could enjoy what they knew best.

And they called it the Cybertron Conference. And it was good.

2008 was the third year that CybCon was held at the King Oscar Motel & Convention Center in Tacoma, Washington, on August 23rd.

I regret that I was only able to attend the last hour and a half of the con before they started packing up, so I missed most of the highlight events (in no particular order)- 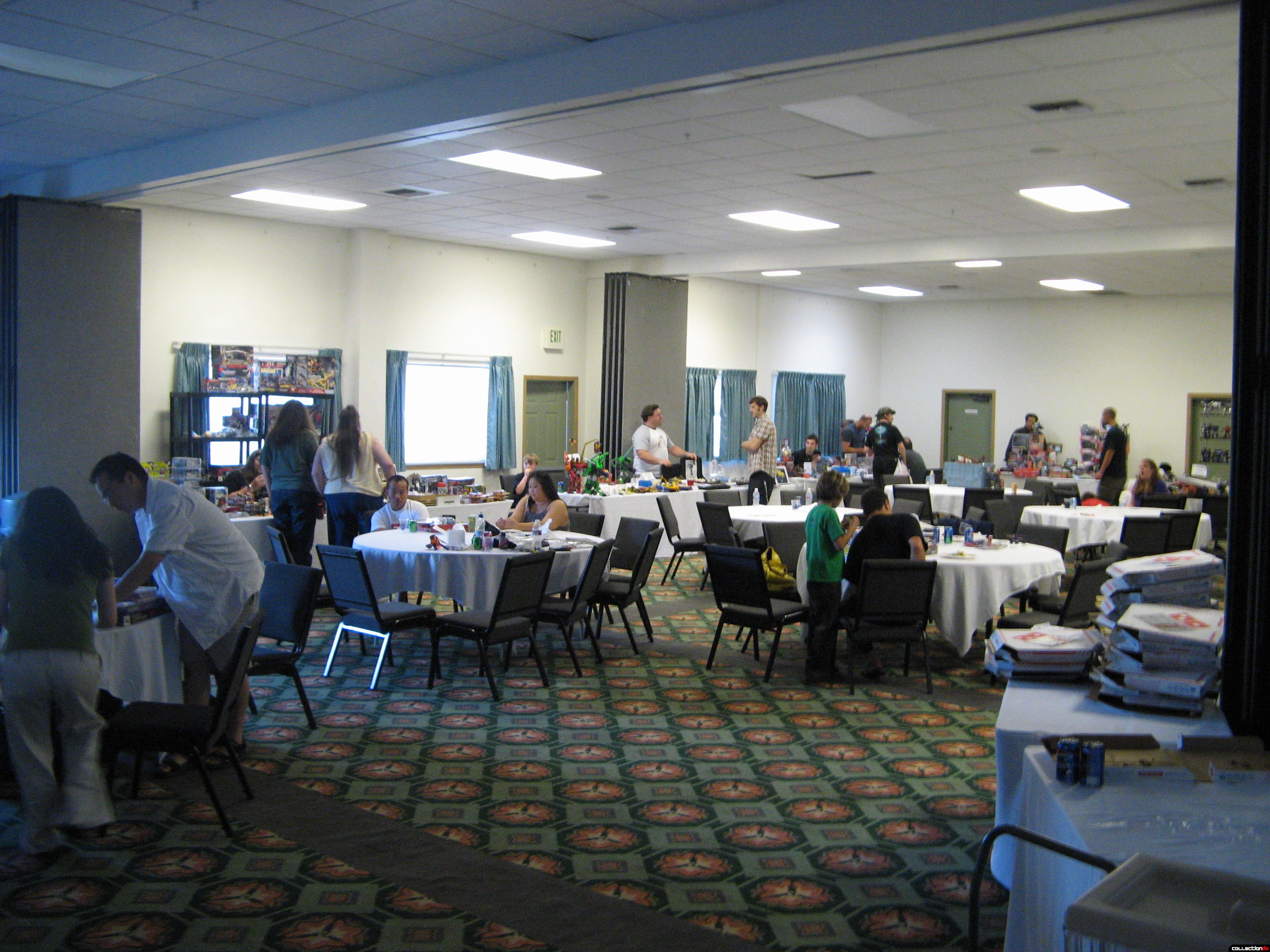 Several tables were set up along the walls, where pre-registered dealers could put up their wares, as well as for simply displaying your collection. 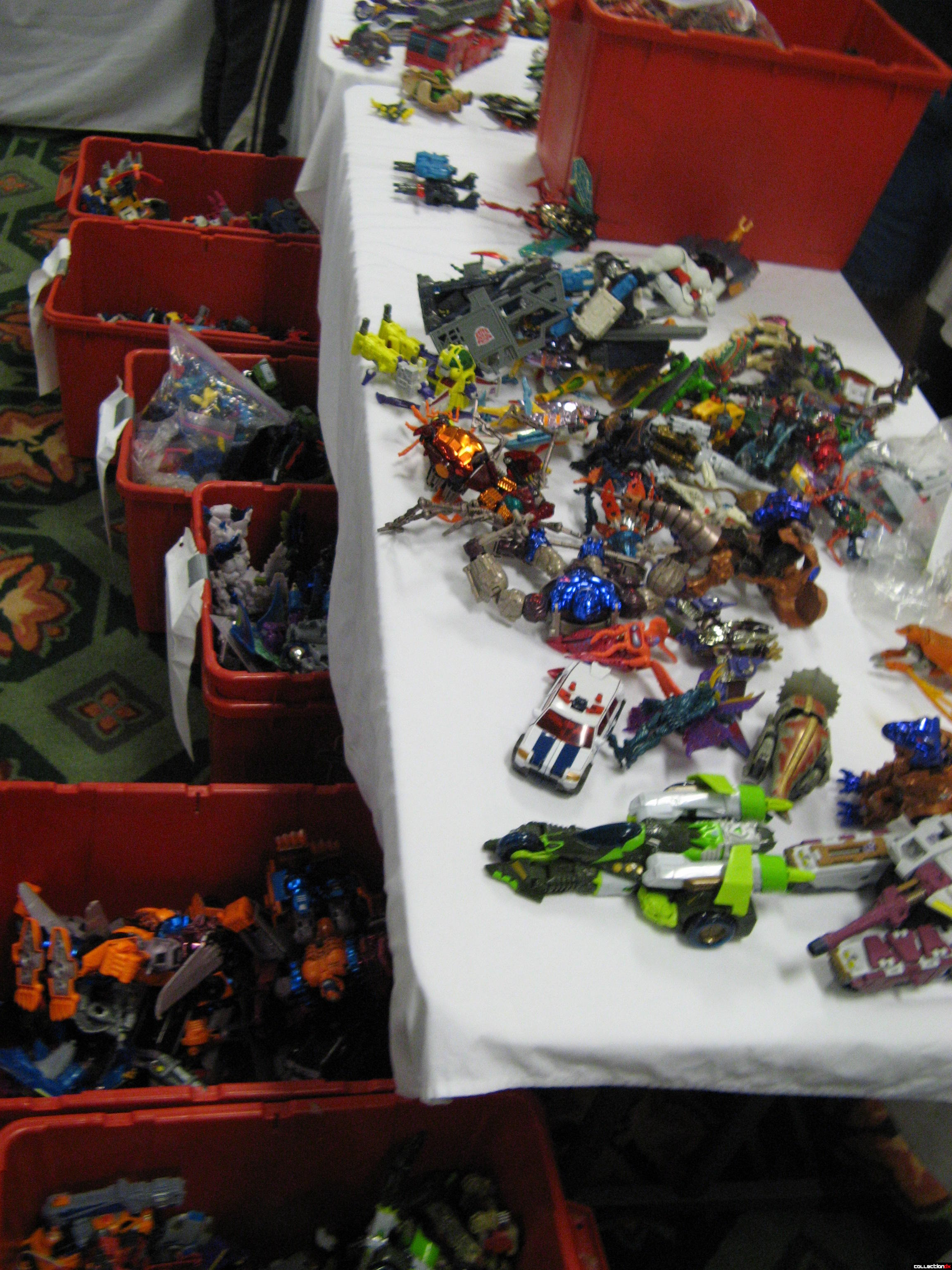 I can tell you- those second-hand prices were killer-deals- I filled a few long-empty holes in my own “Beast Wars” collection, as well as a replacement for a G2 Constructicon that I accidentally broke right out of the packaging over 15 years ago.

One notable toy manufacture made an appearance, CyberFembot.com. Their largest agenda- promoting toys of female Cybertronians, which Takara and Hasbro largely ignores- is to create the first mass-production, fully-transformable Generation One Arcee figure. Parts of the prototype(s), molds, and a finished model were all on display at their table. (Their website claims two original Cybertronian female designs not seen before on-screen are in pre-production stages.) Also on display were several completed designs of their in-house built G1 Devastator [the fusion of the six Constructicons], and one of the repaints. (I mean, this thing stands 18” tall, and has ridiculous articulation & elaborate detail!) 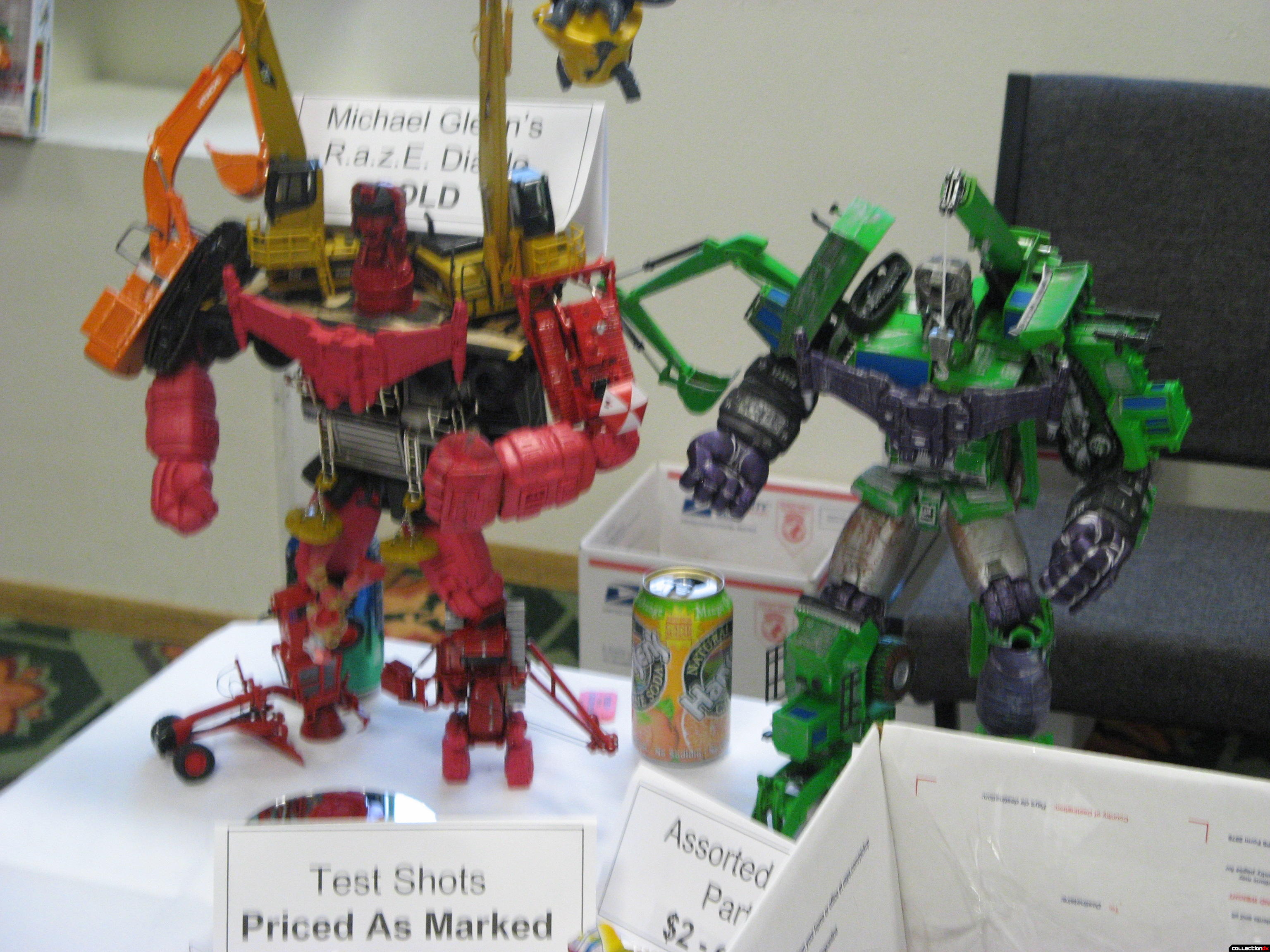 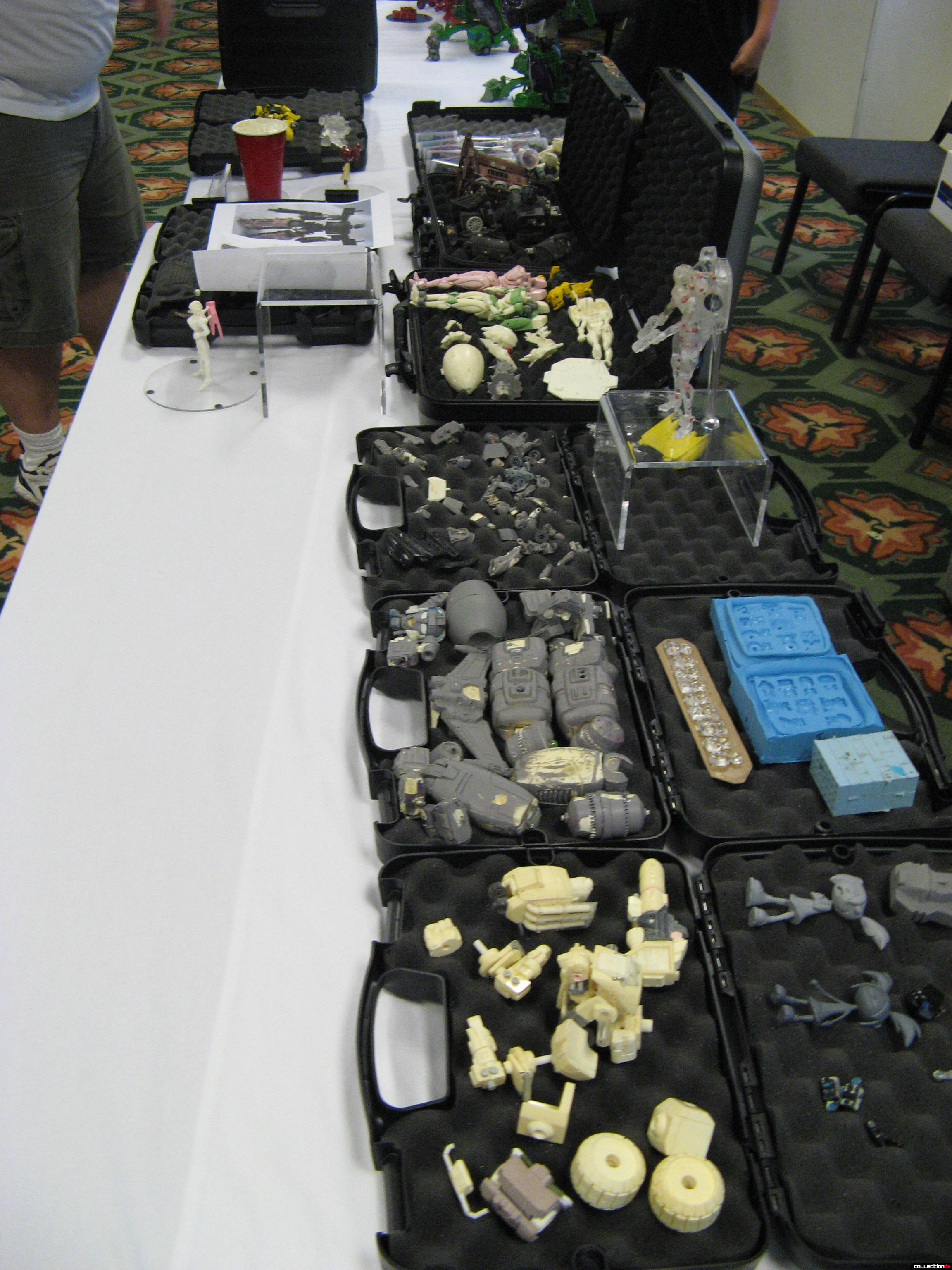 Two of their current projects were also on display. The first is an attempt to make a steam train engine version of Optimus Prime! Standing almost 12” when completed, the coal tender would change into a small fold-out base- of which details they did not have on display, but were planning on. The other was a fixed-pose 3” figure of the nine year-old human girl Sari Sumdac from “Transformers Animated”; several of which they sold throughout the con for others to paint up. 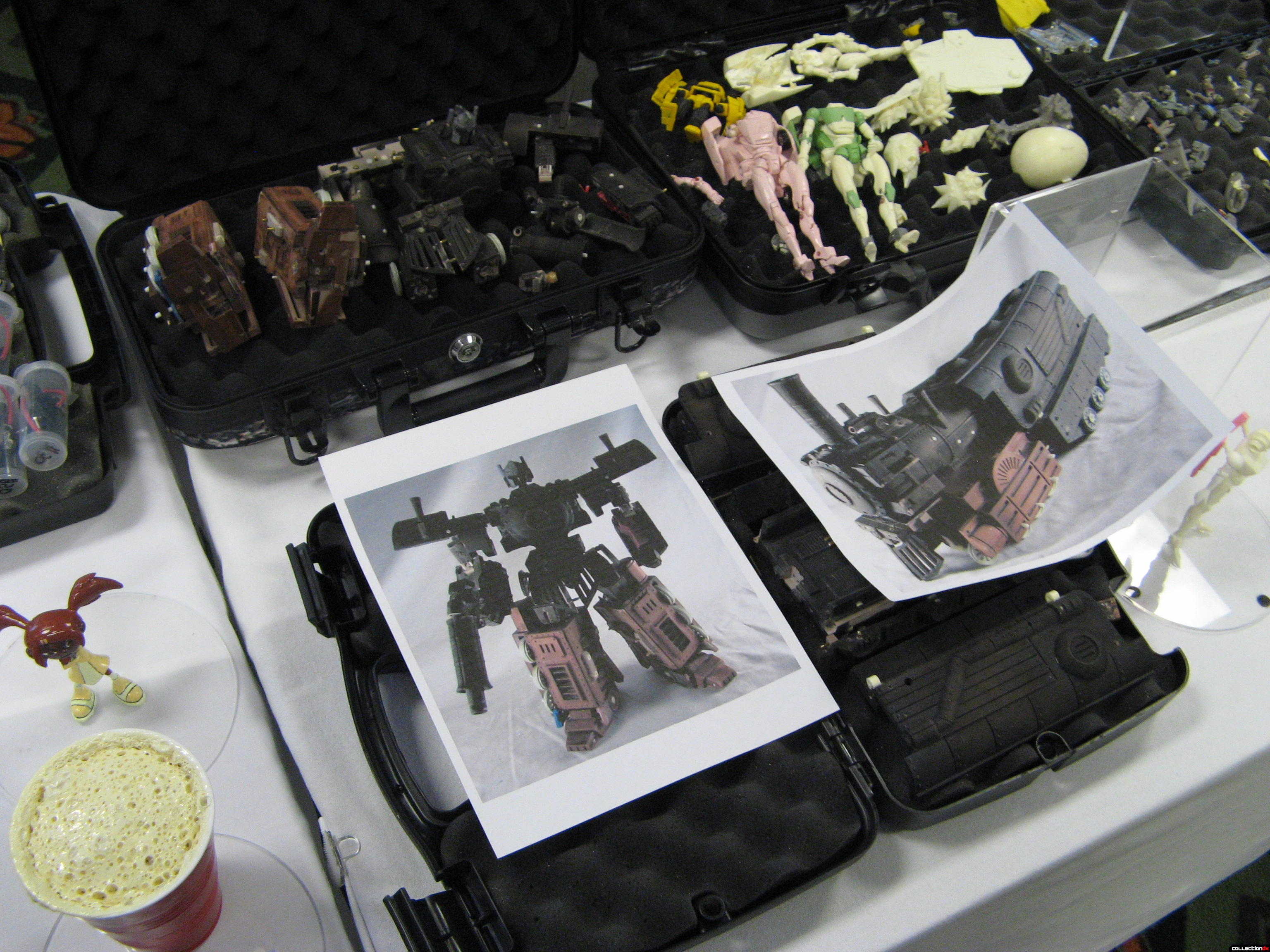 For all four of these projects, a photo album was available to view painted finals, pre-production sketches, early molds, prototypes, and finished models. Regretfully, they were closing up shop when I walked in, so I got little time with their rep!

It was indeed a small venue, taking up only three small conference rooms with the dividing walls retracted. The guy who was running the con, Greg, said that over 88 people showed up during the entire eight-hour event- most of those walk-ins. But he said that even with the pre-registration closed a week earlier, a few walked in from off the street, so that number might have been a little higher. 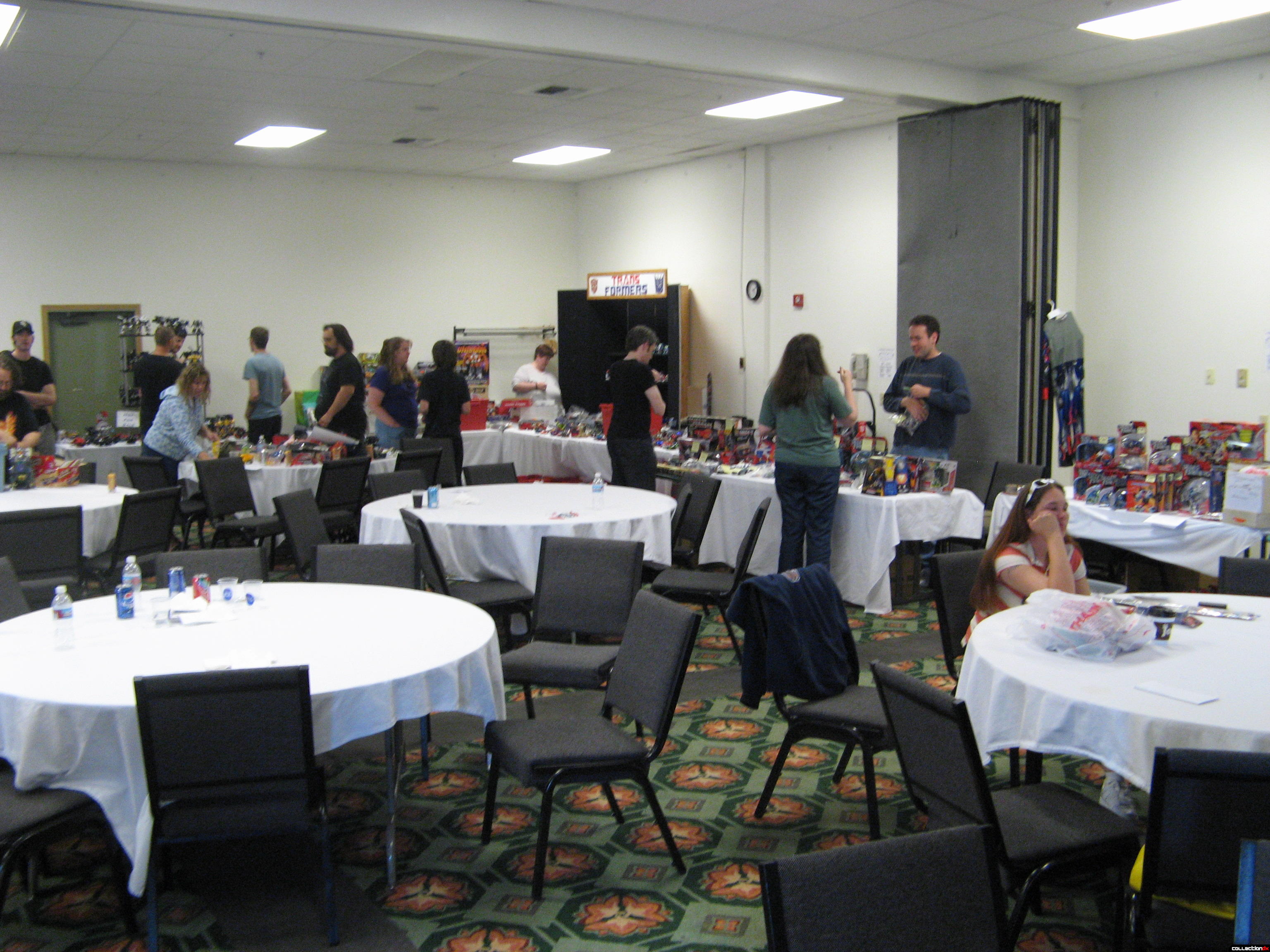 As promised, I must send out a big thank you to Greg. I missed the registration deadline without realizing it, but when I said that I wanted to cover the CybCon online, he let me come down anyways! So if he hadn’t approved, I wouldn’t be writing this article! (It’s a two-and-a-half hour drive south from my home to Tacoma, so to show up and be denied entrance at the door would have been a huge waste!)

Well, hopefully I can make it in sooner next year so I can give you better coverage and more photos than this!

That's nothing. I managed to make my way over to Cincinnatti, OH for BotCon, the official Transformers convention! I also managed to snag the box set and bonus registration figure. I'm currently thinking about typing up a review for it, one figure at a time.

I like hitting up these smaller type conventions like Macross World Con that usually number under 200 people. I remember back in the days when the San Diego Comic con was just that, a "Comic Convention" that had a nice small feel to it, where you could talk and have a long conversation with the artist and creators. Now it's about how many people can the promoters can squeeze into a building without the fire department getting upset and long lines so you can spend less then 1 minute with your favorite artists and tickets passing the $60.00 mark for entry fee. I don't find that quite attractive at all.

These smaller conventions have been cropping up over the years because of the internet connecting people with like tastes and it's a breath of fresh air going to these smaller events that have a organic fan based feel to it.

Man-! I actually just looked at the photos up-close for the first time, and I had no idea that they were all that blurry! I used my Mom's camera because it had anti-shake built into it- which I've used very successfully before- because I didn't want to bring a tripod... and these shots still turned out like crap!

I must apologize for my error in judgment on that which gave us such blurry photos.

NOTE TO SELF: Bring tripod to all future events.

And as to your question, YuushaFan, I have attended not even a handful of cons, but I have never reviewed one before.
Honestly, I was not expecting a big event like the Seattle-based cosplay Sakura-Con; this actually fit my idea of what a small local con would be like.
------------------------------
CollectionDX Staff

4 years ago... my biggest toy fair in my country just small toy con that only a couple hundreds visitor. Like modcineaste said, I got a chance to talk to a lot of people and some of them became my best friends. Now, it a thousands visitors con with one goal only... money...

I love small con. It not how big they are but how interaction form visitor to visitor or seller to visitor that's important.

Man I get what you're saying but to require people to register only up until a week before the event with no straggling is like askiing people to not be human. Every event is gonna have people waiting until the last minute and showing up at the door that's the nature of the beast. I think the best thing in terms of organization for you would be to just accept late-comers and plan for someone to take money and register people at the door. Heck if you got 10 more people at the dooor the day of the event it would more than pay for the door man's time for sitting there the whole day.
I'm just saying if you accept human nature for what it is and plan for it, you'll stop getting so stressed out about people breaking rules that aren't neccessarily needed. Just hire a friend or 2 to help with the responsibilities the day of the event.
I also understand that telling people they can register with no real obligation to show up or even pay if they decide not to go is kind of a no brainer. Either way I'm stoked to be there for my 3rd year in row and I know it will be a blast!