When I was just a teenager I thought it'd be smart to sell my toys and use that money for something far more sensible... Like video games. Years later and I browse eBay cursing that day. Fortunately, Bandai is well aware of the nostalgia market and so The Chogokin line is born... 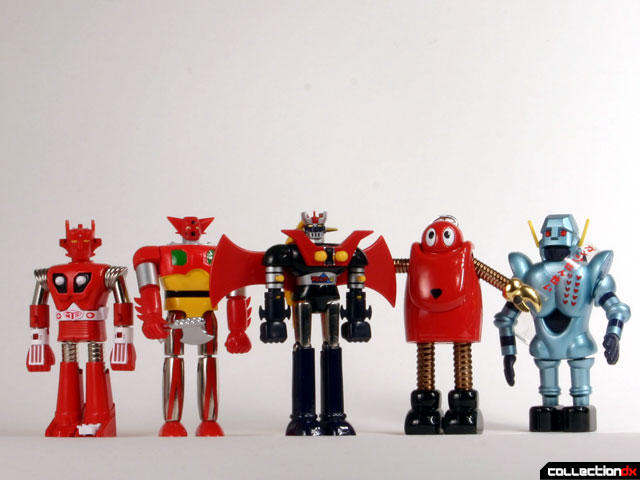 Just like those classic Popy figures, only smaller and cheaper, but still with the all-important die-cast. A chance to recapture a little bit of that robot nostalgia without breaking a budget is not to be missed.

Currently the line consists of five classic robots. Each stands no more than 3.5 inches tall, features satisfying amounts of die-cast for their size and better still have gimmicks. They come packed in polystyrene with an appropriately small instruction booklet and catalog tempting me with silhouettes of future members of this line.

Those expecting the pose-ability and articulation of a modern SOC release will be disappointed by the simple, restrictive joints at shoulders, hips and knees. It's no criticism, that's the point of The Chogokin - they may be small, but they have the gimmicks and spirit of their big brothers. They've got it where it counts though, unlike so many toys these days you don't spend half-an-hour working through their transformation, just flick a switch and Rocket Punch! When you're done and you've found the last missing missile they make a nice little group on the toy shelf.

For me Mazinger-Z or Robocon make the highlights of the series so far, a choice between missiles or wheels really. If I lived in Japan I could get a limited display case to go with the first five, unfortunately sitting here in the UK I'll have to miss out. Bandai promise three more in the line up this year - GT-06 Raideen, GT-07 Getter 2 and GT-08 Combattler V. If it keeps up the high standards set so far I'll be happy to add them all to my collection and just hope next years range brings a miniature Daiku Maryu to the fold.