A few weeks ago, the combined forces of CollectionDX, Toybox DX and Incubot gathered to host the toy nerd social event of the year – the East Coast Chogokin Summit. 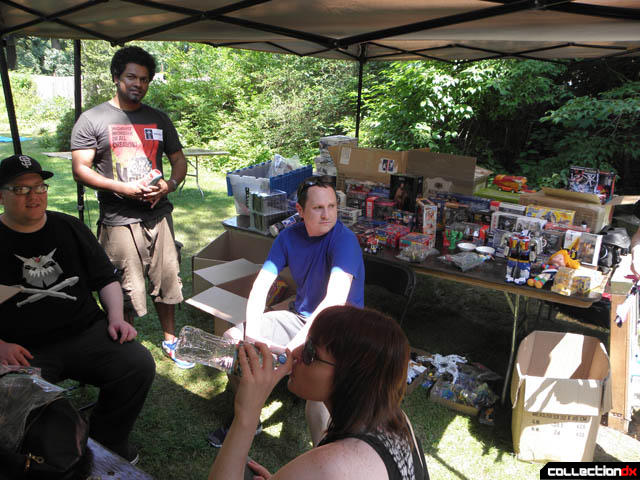 Even though the summit is named “Chogokin”, all aspects of our hobby are represented. From Jumbos to Sofubi, from Microman to Transformers – if it vaguely has its roots in Japanese toys, you can find it here. 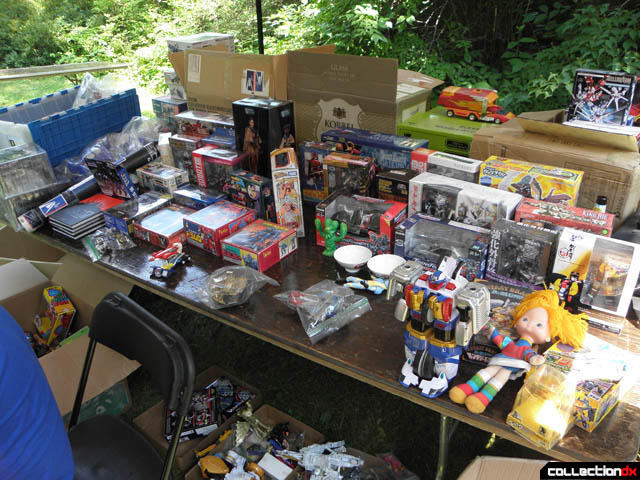 The Summit is something that brings us all together. It’s an opportunity to reconnect with old friends and meet new ones. People come from all over to buy, sell, trade, show or simply marvel at new and old toys. 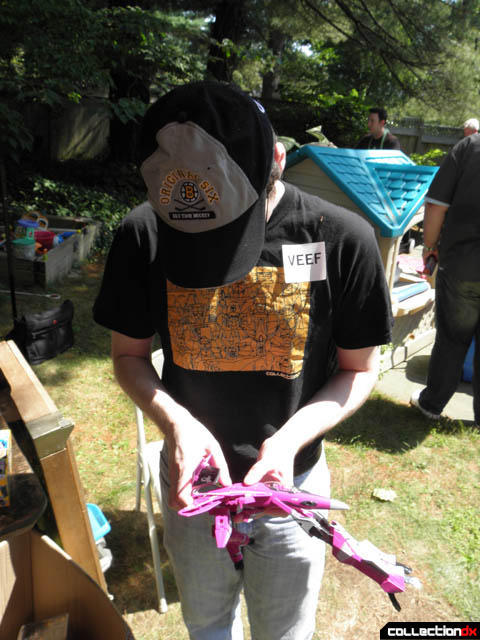 But this year was something different. Not only was it the biggest summit ever, but there were more people than ever showing off their own creations. As people are in this hobby longer and longer, there seems to be a tendency to move from collector to producer. This is probably due to the high percentage of creative people involved in the hobby. Were the naturally creative drawn more to these cartoons as children, or did children become more creative because of the cartoons? Either way, the amount of creativity on display was astounding.

As always, food was provided by Chef Mason, who brought the delicious gourmet burgers. My favorite is always the Chorizo and Walnut. Ample food and drink were there for all, ensuring nobody went hungry or thirsty. 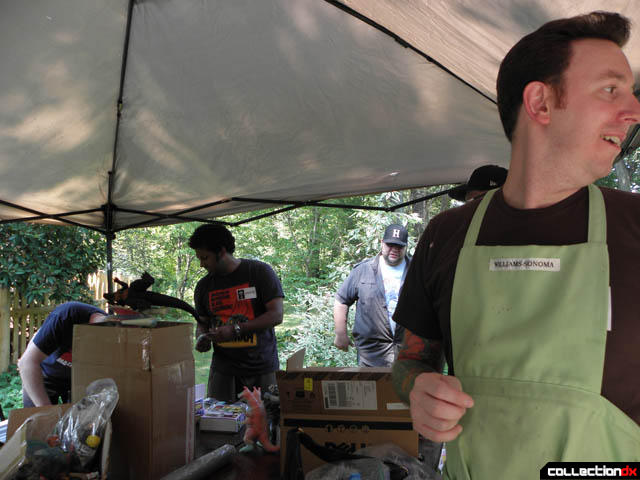 The Sound of the Summit

This year we were graced with the presence of Leonardo Flores – better known as Modcineaste! He brought his anime 45s out from California and did a fantastic DJ set with music from our favorite classic Japanese anime. 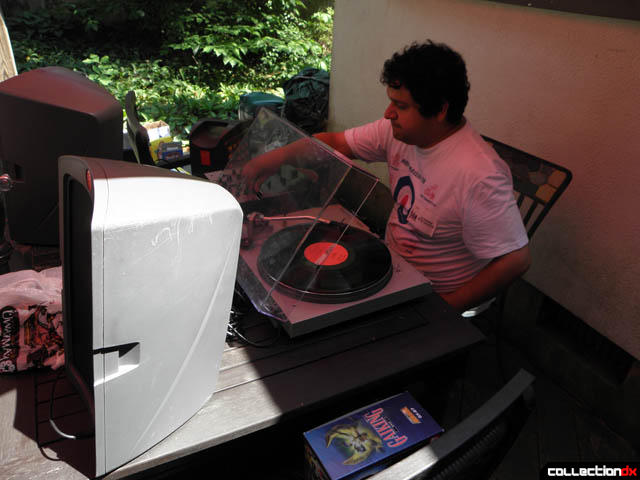 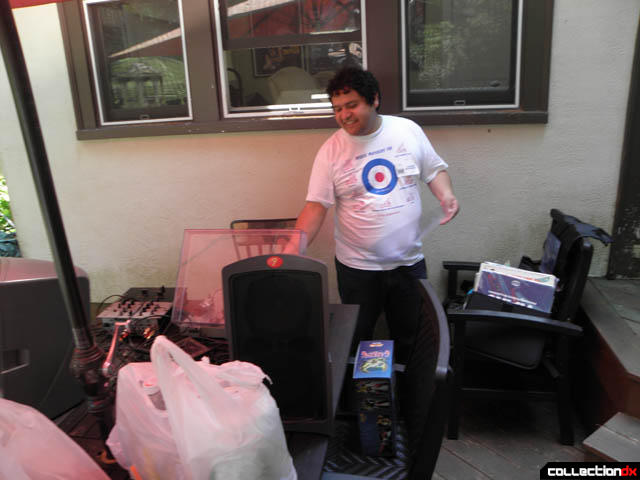 Each year people bring toys to buy, sell and trade, and this year there was more stuff out than ever. I believe there were 10 banquet tables full of toys, both inside the house and out. This year I saw a distinct trend in people buying less, opting to trade instead of parting with cash. I brought out three big boxes of toys and returned with two, so I consider that a successful day. 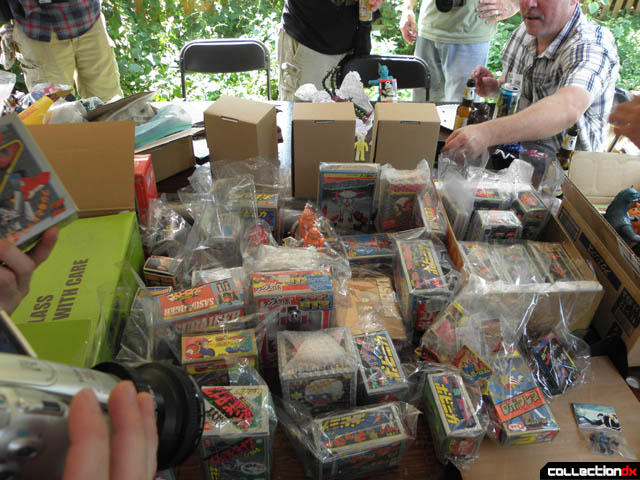 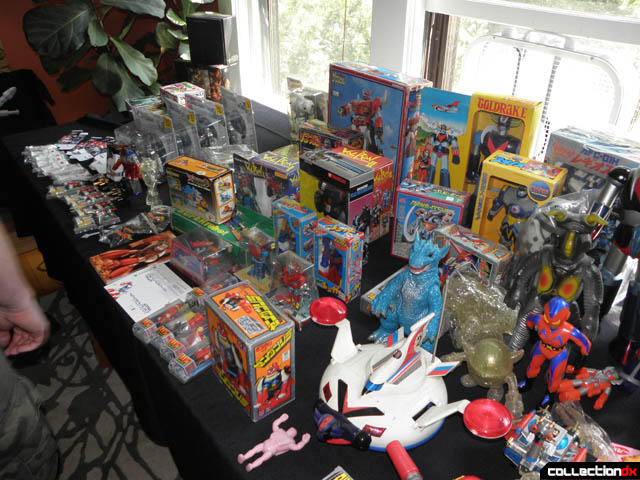 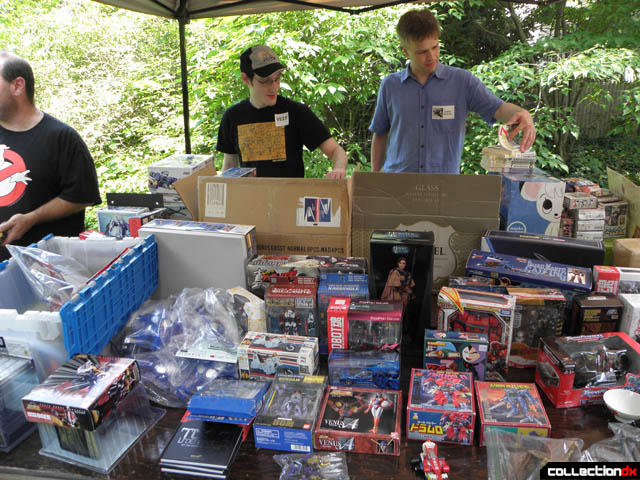 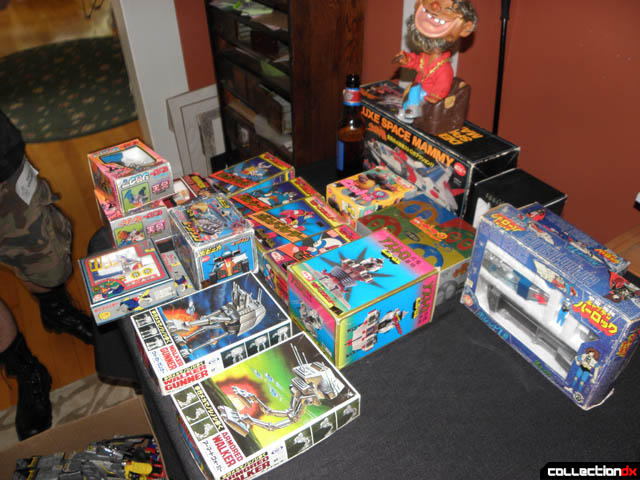 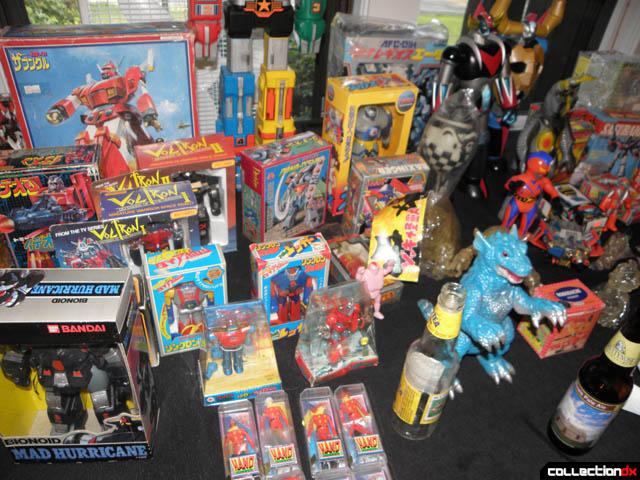 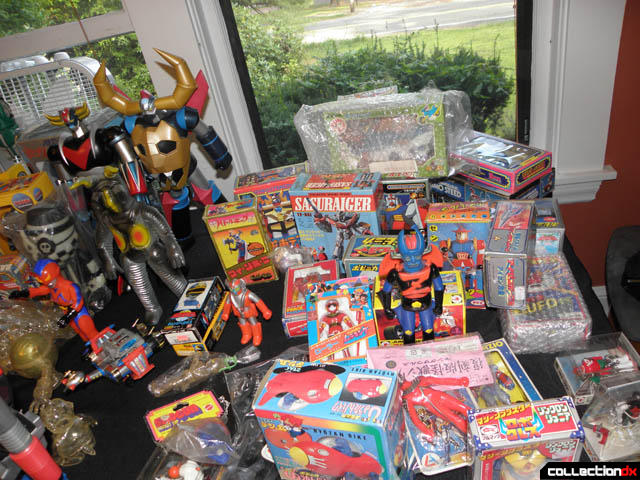 Increasingly the line between creator and collector is blurring. What sets this crew apart is the distinct lack of pretentiousness. Here are some of the creators who showed up with the goods:

Matt Walker is a Massachusetts native who goes under the moniker of dead presidents. Not only is he a fantastic customizer, but he launched his own business called Monster Kolor supplying paint to the custom toy community. In perhaps is the best application of these paints to date, Matt brought four custom Jumbo Machines that he painted with his paints. 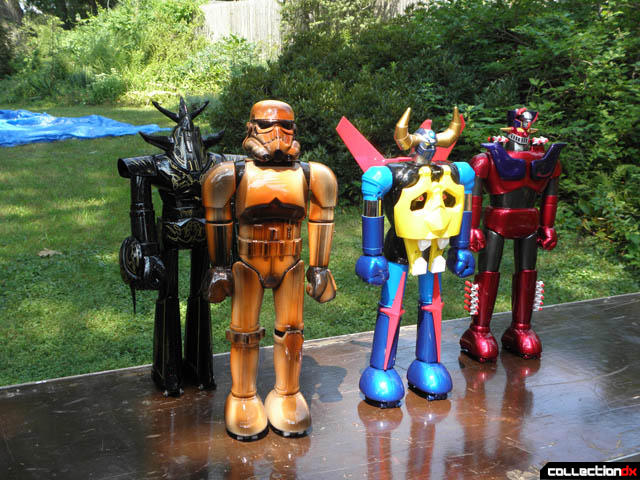 The Black Raideen jumbo was insane and he was lucky I didn’t try to steal it. Matt told me all about the steps required to make something like this, and it sure isn’t just paint on a toy. These things are art, and deserve to be in a gallery. By “gallery” I mean “my house”. 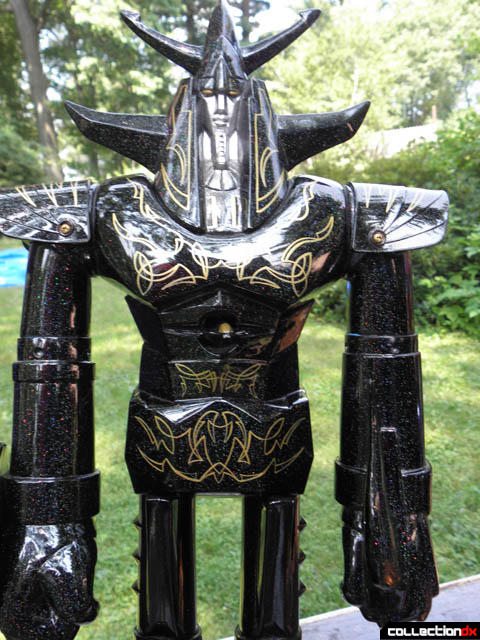 Matt also brought a vinyl of his Cosmic Squadron figure which was now fitted with an actual missile firing mechanism designed by Sanjeev! 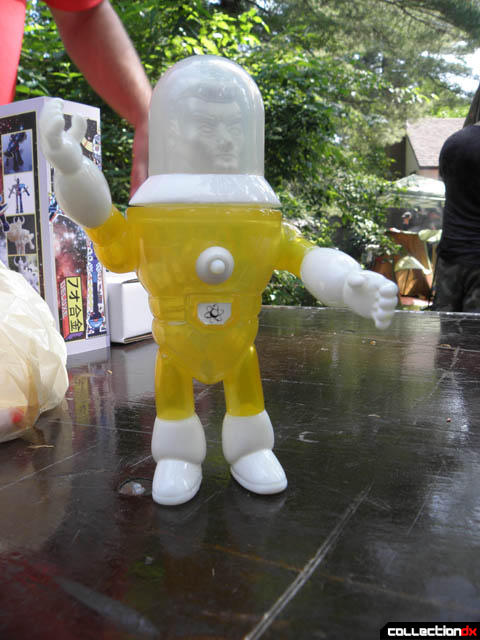 Mike is from Belgium, and is a master with CAD software and computer graphics. He is also an insane Jumbo Machinder collector. Like all hardcore Machinder collectors, he lusts after the super-rare machinder villains. Mike rendered computer models of several machinder villains and had them made at the size of a standard vintage vinyl, complete with miniaturized vintage boxes. These things are amazing. Right now they are one-of-a-kind, but who knows what the future holds. All I know is that if these get made, I’m buying them all. Check them out at http://freetimetoys.blogspot.com/ 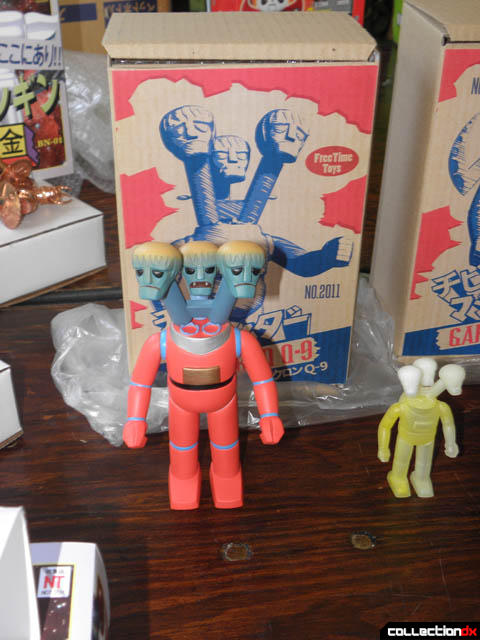 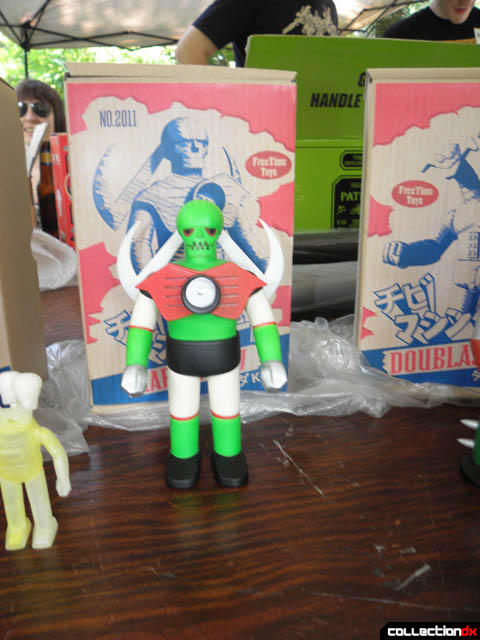 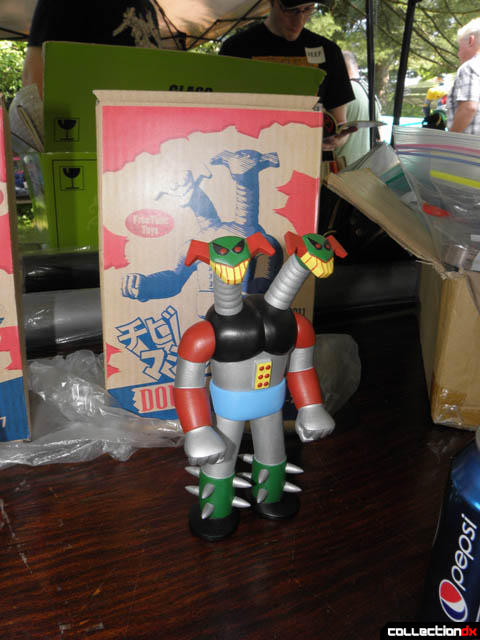 David is a freelance illustrator working in Western MA, which to those of us in Eastern MA, it might as well be Alaska. Once you cross rt. 495 it’s like another state out there. But the wastelands are not devoid of talent, and David is an example of that. He brought out some prints and a mockup of his new book – Mechazone 1.5 that was recently funded via a successful Kickstarter campaign. I got an awesome print of Voltron that appeared in the recent “Voltron: Drawn and United”. Keep an eye out for the release of Mechazone 1.5 soon! 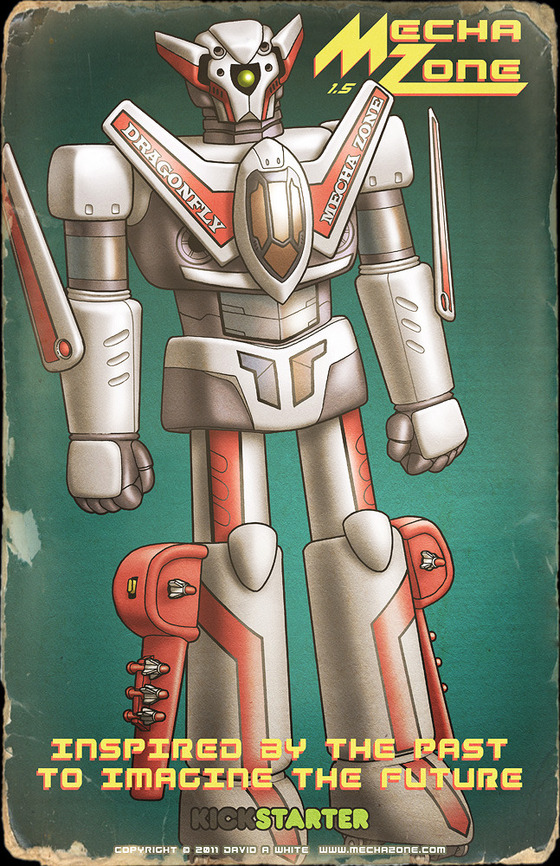 Sanjeev brought his diecast Gin-Gin toys, this time in new finishes such as Chrome and Copper, as well as some miniature bagged versions. I can’t wait until this guy has a full-color release. Seeing them all laid out on the table was amazing. 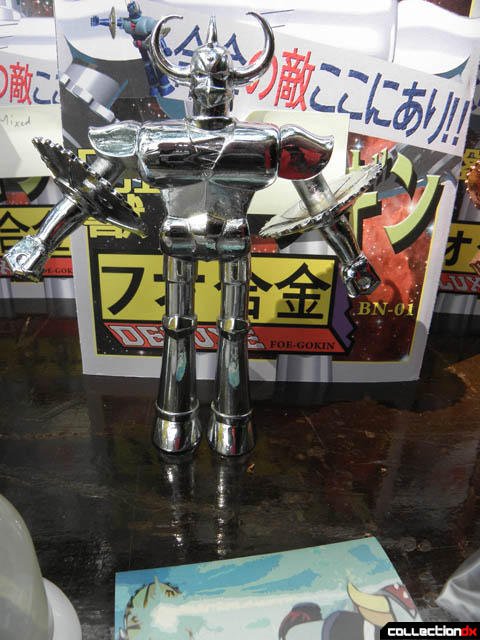 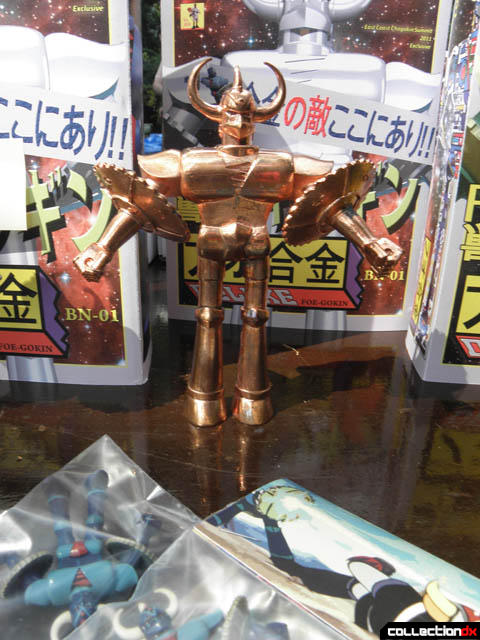 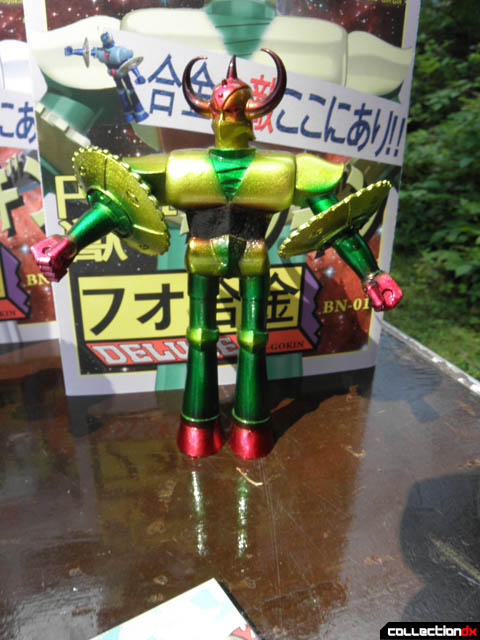 Check out http://brownnoize.blogspot.com/ for updates on his projects and another awesome write up of the summit.

Robot God Akamatsu by James Biggie and Frankie B. Washington

These two locals brought the old-school robot love with prints from their upcoming comic book “Robot God Akamatsu”. Frankie’s art really evokes the work of classic Herb Trimpe Shogun Warriors, but with a modern anime-influenced aesthetic. These guys are cut from the same cloth as we are. I got a sweet original Sketch Card from Frankie, which has opened up a whole new world of Sketch Cards that I need to get involved with. 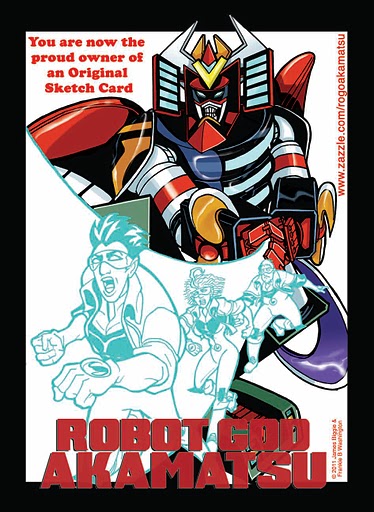 Check out more at http://www.zazzle.com/rogoakamatsu

Incubot makes those cool Voltron USB drives, and the forces behind the company are also responsible for Toybox DX. At the summit they had a full assortment of regular and white USB drives, as well as a summit exclusive Nekosaur Vinyl painted up by Dead Presidents in a scheme reminiscent of Gekiganger III. Also available were Incubot x Toybox DX x CollectionDX shirts, some of which will be available to purchase shortly. 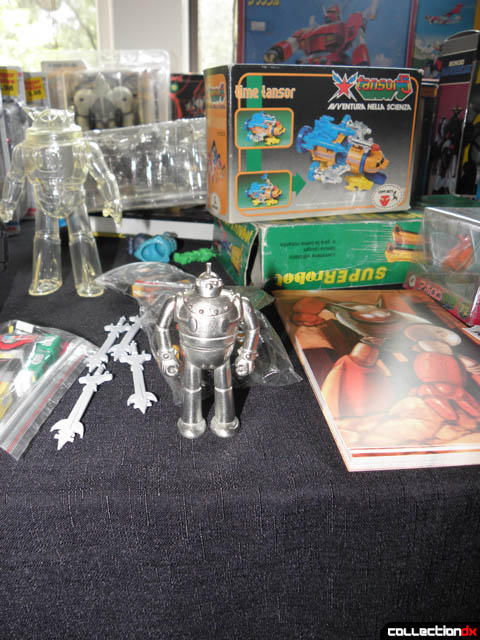 Other CollectionDX members were in attendance as well, such as VF5SS, Anavel, Nekrodave, AJpro Die-Cast, Jerilock and more. Prometheum5 would have been there, but he screwed up the date. Check out this vintage Godaikin Store Display brought out by Mr. Ginrai Next year, we’ll do it all again, bigger and better!

10 comments posted
I truly do want to go to a

I truly do want to go to a Summit someday.

I actually had something planned for the participants this year, but I too goofed on the date, so it didn't happen. Q_Q

Well, now that I have Skype, I might be able to watch online live or chat with you guys!

It's worth it if it's within your means at all.

I went to the robot japan summit in tampa. One of the best times I've ever had.

That's the problem- it's not within my means.

Wow, looked like a good time. Maybe one of these days i'll be able to make it out.

You can totally see me and Recognizer nerding out on books behind the Doublas.

I definitely need to make a proper plan to come next year.

Hey It's Sanjeev !! haven't seen him around collectionDX in sometime.

I wish there was an early post of the summit, or maybe there was and i missed it, anyhow i'd love to attend next year :D.

You know,any dork with a decent job (or credit card!) can buy shit,but these custom guys are taking it to the next level! I only know Sanjeev from this site,so I was pretty shocked he's making his own DIECASTS? I didn't even know you can do that? Also Sanjeev is wearing the world's best T-shirt in that pic.

That guy's Doublass and Garuda figures are INSANE. I mean that is awesome,if he was standing next to me I would literally bow. He did that via computer somehow? Anything more advanced than Dr.Logo has me scratching my head. Hey Garuda is way too rare and expensive,who cares I can just make one! That's nuts.

I'm not sure about the legalities,but Modcineaste should do some MP3s or youtube videos or something of a DJ set. I'd love to hear some "You a Shock" as well as whatever other oldschool stuff you might have.