The 2010 Summit was held last weekend, and we had our best turnout ever. Over 30 fans of robot and toy culture made the pilgrimage from all over the US to Watertown, Massachusetts.

When we arrived, people were already there and the tables had been set up. Mason has a great backyard for the summit. We added our table and tent to the mix, and unloaded the coolers full of frosty beverages.

Almost instantly the trading began. When a new person showed up with goods, people flocked over to see what they had brought, hoping to get first dibs on the new goods. The place was beginning to look like the coolest toy store ever. 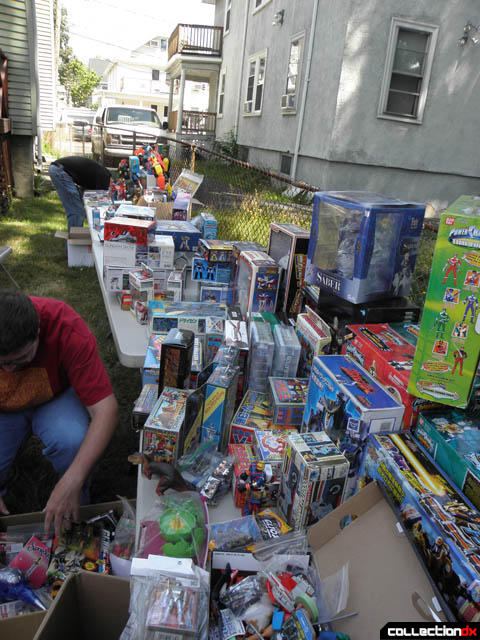 New and old faces arrived, some with significant others in tow. CDX staff members were representing: Nekrodave, VF55S, Prometheum5, Anavel, Starro, Sanjeev, The Enthusiast, Apex3, and of course, me, JoshB.

With new blood brings new discoveries. Mecha artist David White (http://www.mechazone.com) was there with prints and a poof of his new book “Mecha Zone 2” as well as a selection of toys. I saw these little chogokin and new that I had to have them. They share the same bodies of their smaller shogun counterparts, but the arms, legs and heads are entirely different, with bending knees and shooting fists. Where did these come from? I think they are Korean, but more research is needed. 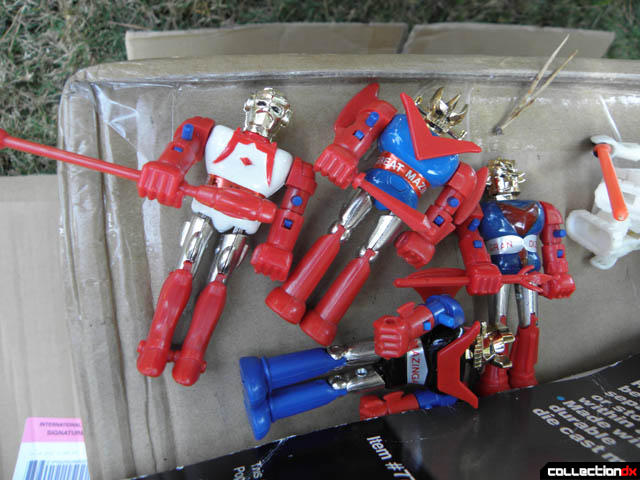 When the grilling began, the air smelled of chorizo and bacon.. Mason once again broke out his gourmet burgers much to everyone’s delight. Even if you are not that into toys, come for the burgers. Seriously. 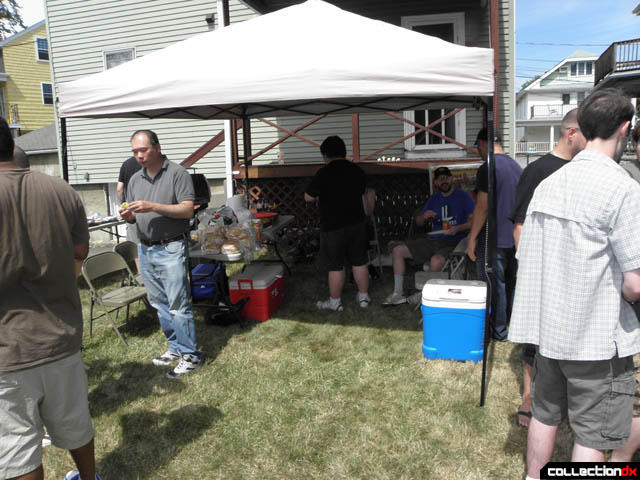 And then it was time for the bowling. I had picked up a Transformers Primus at a yard sale for one dollar some time ago. It was missing everything, and a few parts were broken on it – it was worthless, I assure you. But it was a robot that turned into a ball. I went around and asked people for donations for “pins” – almost everyone had brought junkers to give away for parts and such. 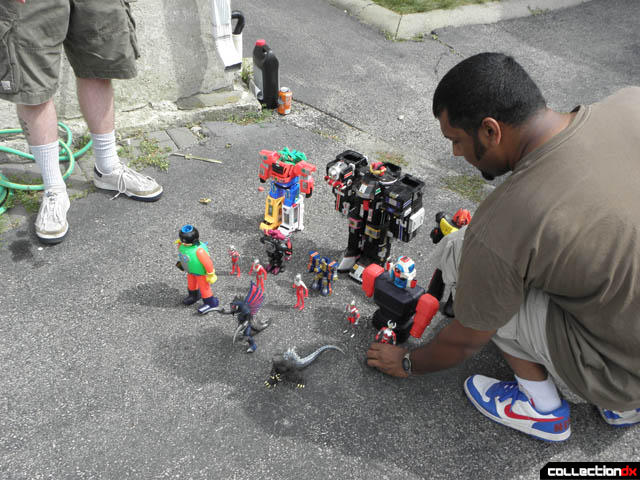 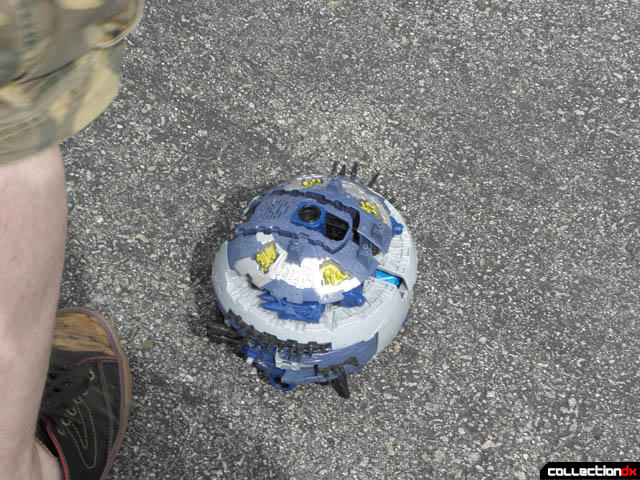 Was this really happening? Yes, it was. The results were nothing short of spectacular. People laughed, people cringed! Toy destruction unleashes all kinds of anxiety, you should try it! 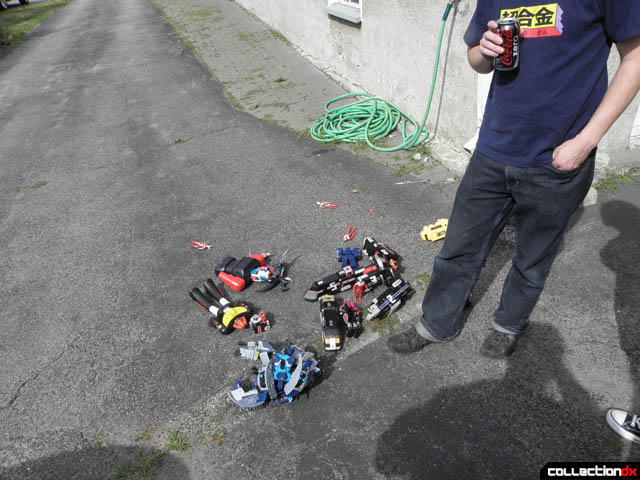 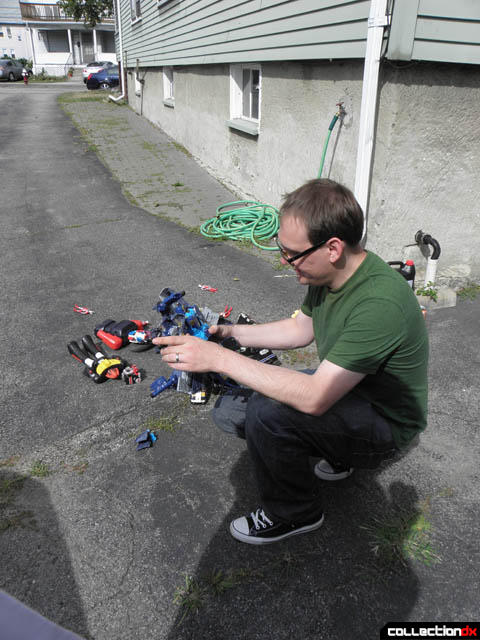 Later in the afternoon, lethargy set in. Those burgers, while tasty, sat in your stomach like a rock. People began to gravitate to chairs so that they could give their feet a rest. 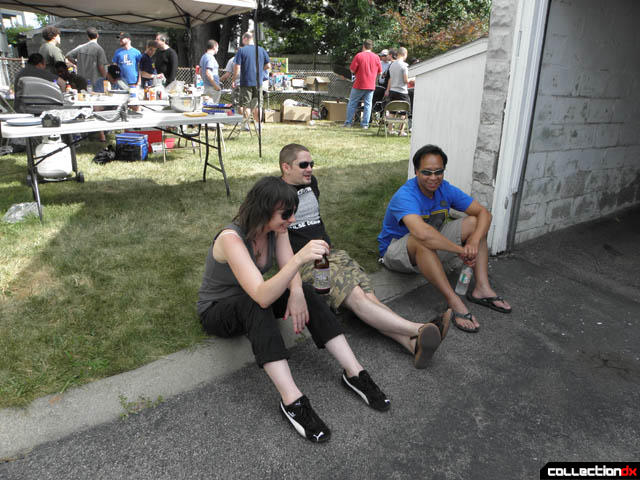 The summit seemed to be winding down, that is until two brothers showed up. They had grown up in the area, gone to Mr. Big’s, and had saved their childhood collection, perfectly preserved in original boxes. Each item had its original price tag. It was an amazing collection. Of course people perked up and surrounded them, making offers on things. Unfortunately it was all for show and tell for now, but the experience of seeing these items was awesome. 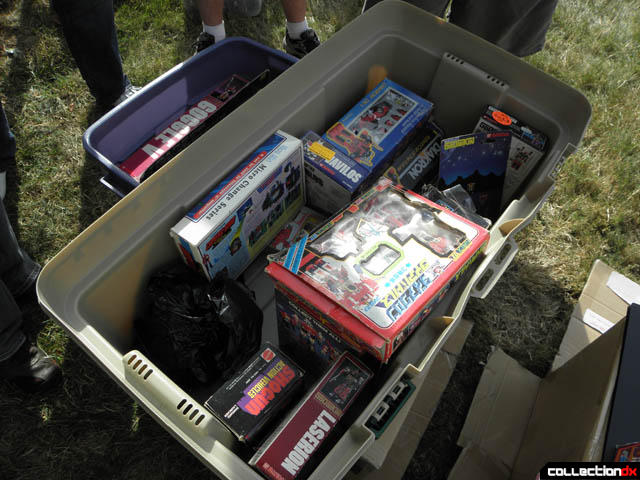 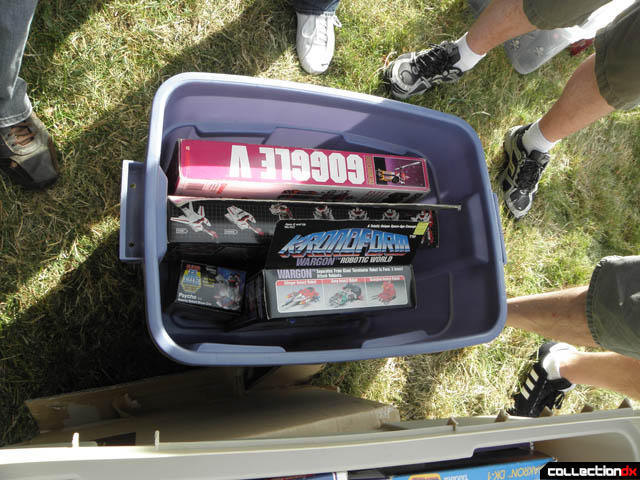 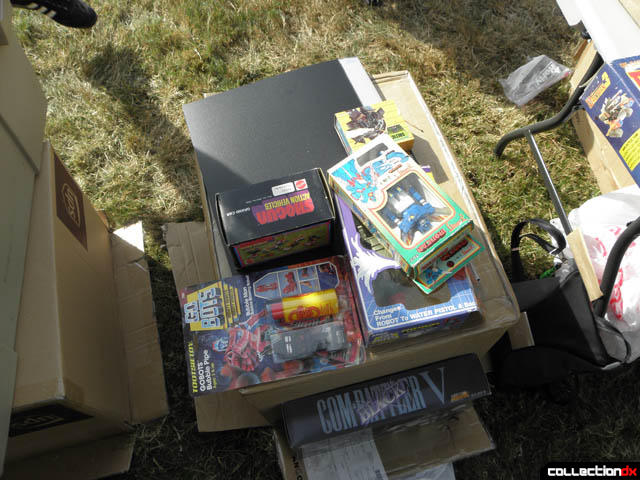 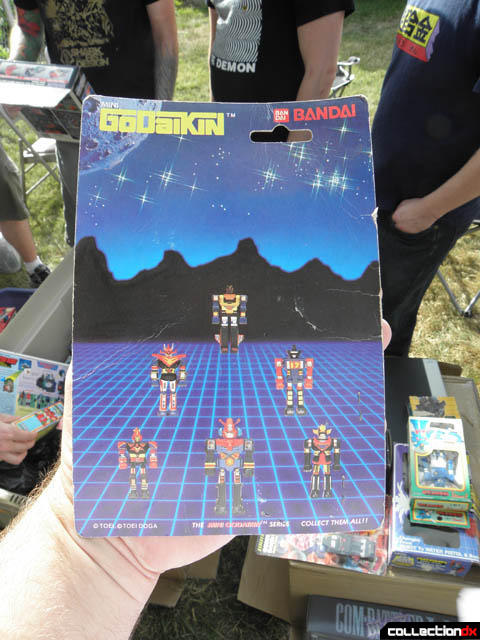 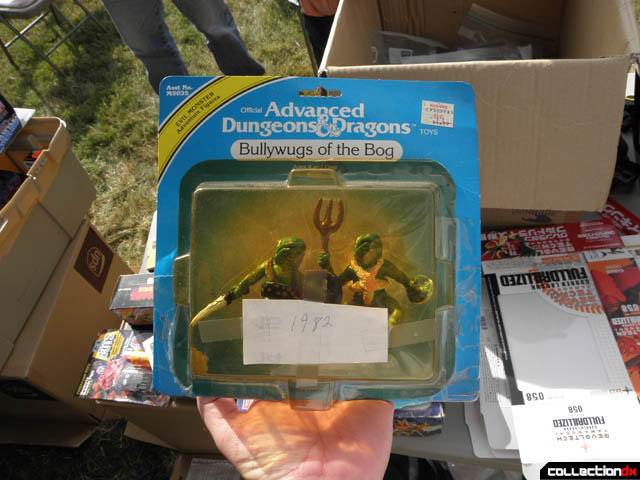 From there we decided to move inside and watch some Grendizer. Sanjeev had unveiled his toy earlier in the day – a diecast Grendizer villain in scale to the old Popy release. We watched the episode with that character and we really “Got” it. The prototype is cast out of lead, and features magnet joints in the head and arms. Price and release is TBD. 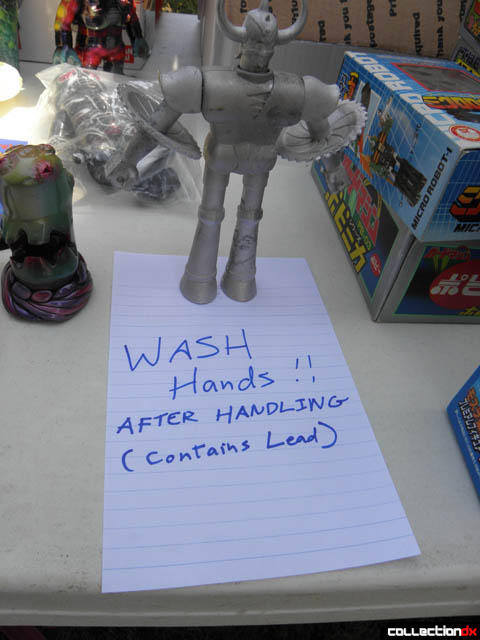 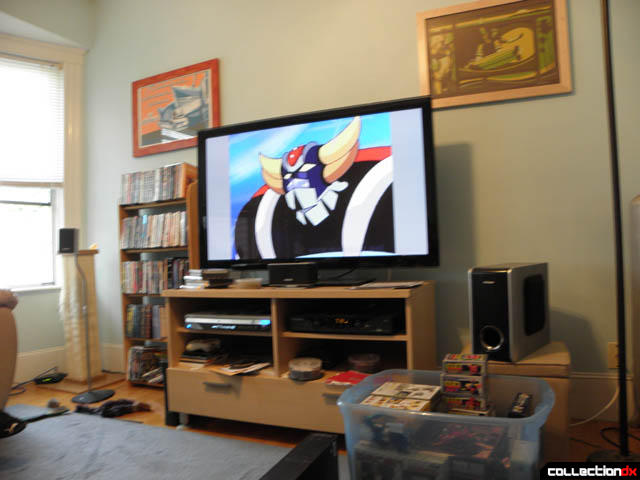 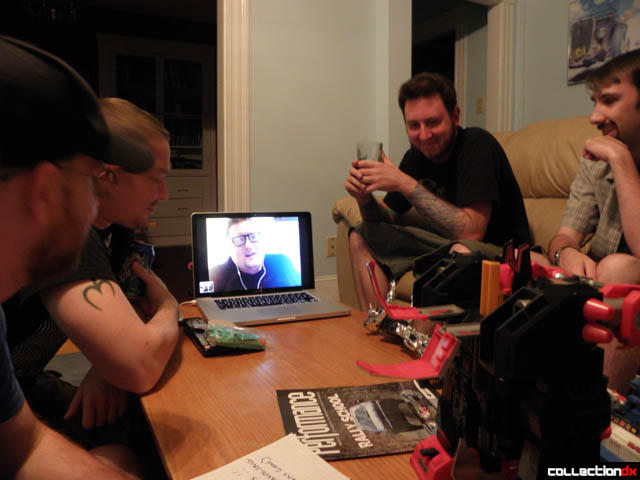 We didn’t think it was possible, but our stomachs began to grumble. At about 9 we headed out to the Town Diner and Watertown and got pancakes. Delicious pancakes. 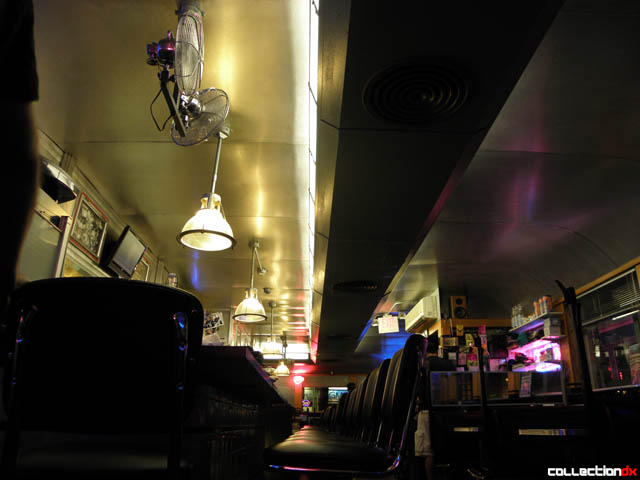 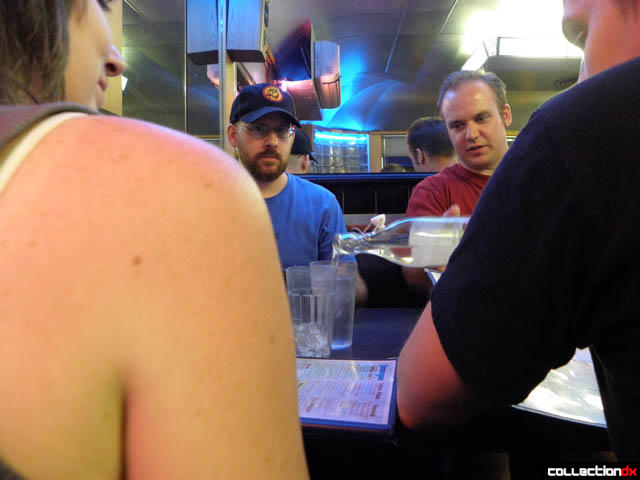 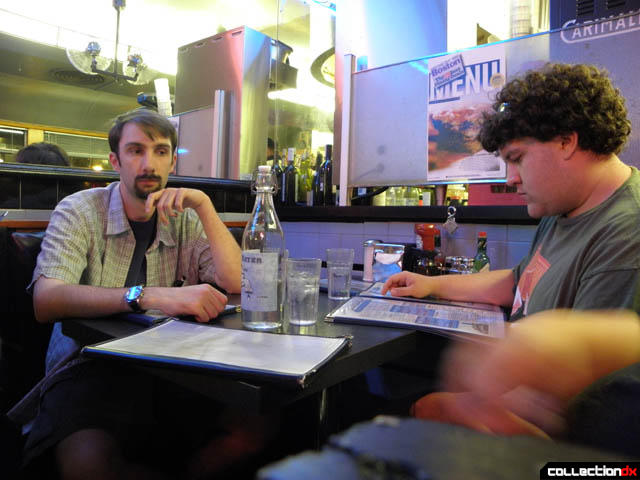 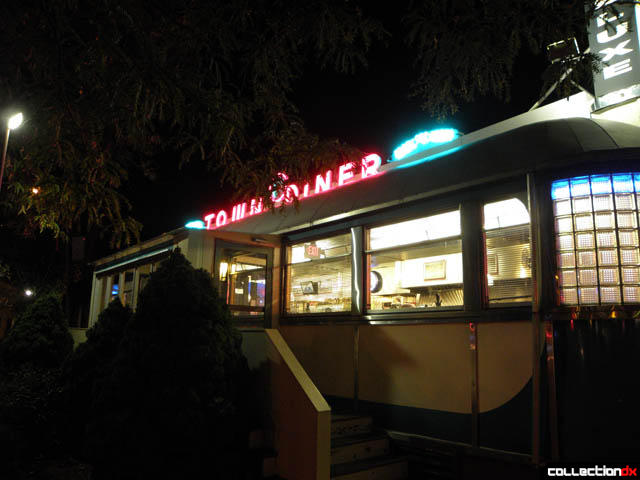 It was a perfect finish to a perfect day. Good friends, Good toys, Good weather and Good food. What more can one ask for?

See you next year kids. 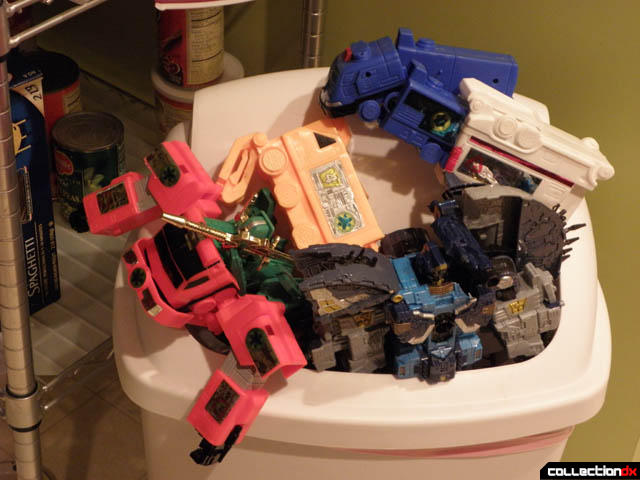 I'm really glad Primus bowling was caught on tape. It looked like after enough rolls, the thing just started to warp on impact! The throw at the end really hit it. And man, that was a gorgeous G1 Jetfire... My jaw dropped when I saw them pull it out of the box!

I really am annoyed that I couldn't make it to this year's summit. Hopefully in the future I'll be able to make my way there though. We'll just have to see.

Thanks for the link, yo! I got the official proofs in from the printer this morning. I should have the book in hand by the end of September!

I liked every minute of the video (except the robo-bowling). Anyway, the piece which fascinated me is Sanjeev's GIN GIN - I never knew it ever existed! Did I see a Great Mazinger Jumbo Machinder in a bin at 07:53? A friend of mine was looking for spare fists!

I have great Grendizer news for you!!!!

Stay tuned you too!

If it's a diecast, anime-accurate and in anime-color I will pre-order one. Comanda Goman rules!

Aye, this is Scott, one of the bro's who attended the ECSUMMIT 2010. Man that was fun/interesting. I thank you all for bringing back the memories. I will speak for myself and say I haven't thought much of our collection in the past 10 years. I knew it existed, I knew it was a good one, other than that I didn't know there were other huge fans that appreciated these as much as we did. The Summit reignited in me an appreciation for these fine relics and how big a part of my childhood they were.

Want to give a shout out and thank Mrs. Big in Waltham for giving us 8 year olds the "heads up" on the importance of preserving these toys. I can't believe we actually did! She was very CONVINCING, borderline stern about not losing missiles and such. Very nice lady though from what I remember.

We brought about 30% of our collection so at some point I can go through the rest, unpackage and take some nice pictures for you to view. We've got some sh*#!

John, thanks for giving me that "Serioustoyz" magazine. Umm, I hope you gave it to me and I didn't just walk off with 'er :) This thing is one of the coolest presentations of a historical toy archive I've ever seen. I pick it up once a day and browse. I will be purchasing the next mag when it comes out. Some of these toys absolutley blow my mind. Also, interesting to see what the starting bid is in the magazine, then what it sold for on the website.

Summit was great this year. We almost need to make it a 2 day event now, as it's getting harder and harder to get to know everyone. My only regret is not being able to mingle more with some of the folks who showed up later in the day.

I certainly would have showed up had the cost of travel not been so prohibitive.

Glad to meet many, and glad it was a B-U-Tiful day for hanging outdoors. Bummer I got there later, and missed a few long-time-no-sees, like Dan, and Nadia!

MechaZone Dave, for sure keep us posted on your project.

And GoodGravies! Did anyone even think to bring out the Morphy Catalog for anyone new to browse through?
Scott, if you like the SeriousToyz catalog, your head'll explode with the Morphy's one(solid packed with Japanese vintage, and modern toys).
Maybe an "Past Auction House Catalog Archive" box, could be a fun feature, to have sitting out at these gatherings. They sure bring a smile, and are a nostalgic trip, right along with all the fantastic toys everyone brought.

As examples of how well the trading, and "insider" pricing on cool stuff goes, may as well post haul pics up if ya got 'em.

OK, this is one great part of the summit. Many cool deals to be made, many with just trading of toys, a few with cash, just seeing stuff you didn't even know you wanted until it shows up in someone's trade-pile.
Everyone has different collecting tastes, and it shows in the great variety of stuffs on the tables.