While my interests these days tend towards obscure robot flotsam, the Transformers will always exert a powerful force on my soul. Though the Bay-former design ethos turns my stomach, TakaraTomy and Hasbro, with numerous non-movie or hybrid series, continue to reinterpret the G1 classics with ingenuity and style. Wreck-Gar is the perfect exemplar of just how far these toys have come since my youth.

The Junkions were introduced in a terrific sequence in the Transformers animated film.

A generation of kids fell in love with the Junkions and eagerly anticipated owning their very own Wreck-Gar toy. We were deeply disappointed.

The original G1 Wreck-Gar stands as a towering failure of spirit and execution. I have a nostalgic fondness for the piece, but boy does it suck. The toy was just so half-assed and carelessly engineered. 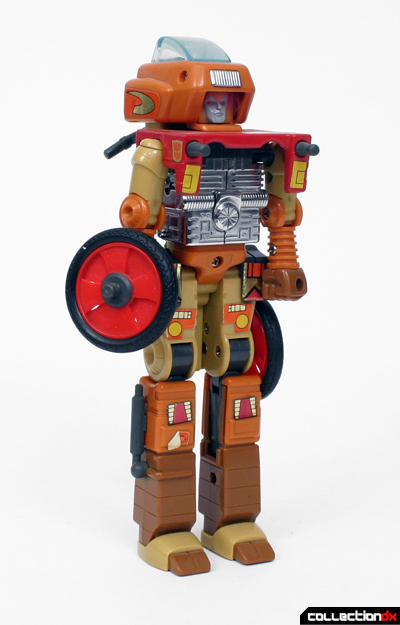 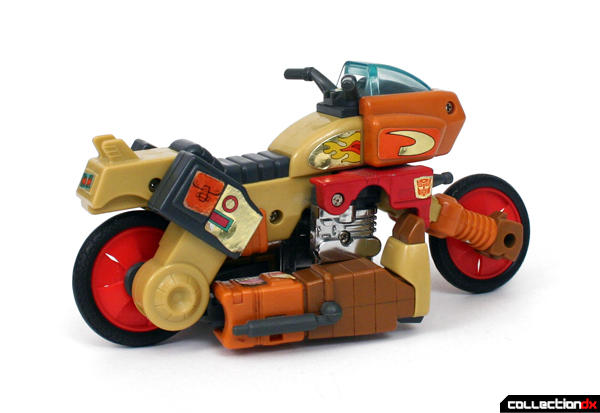 Hasbro has made good with the Reveal the Shield release of Wreck-Gar*. The toy is everything it should have been the first time around.

Wreck-Gar is packaged on a standard bubble-card. I like that Hasbro has started using paper twist-ties instead of those awful wire ties. 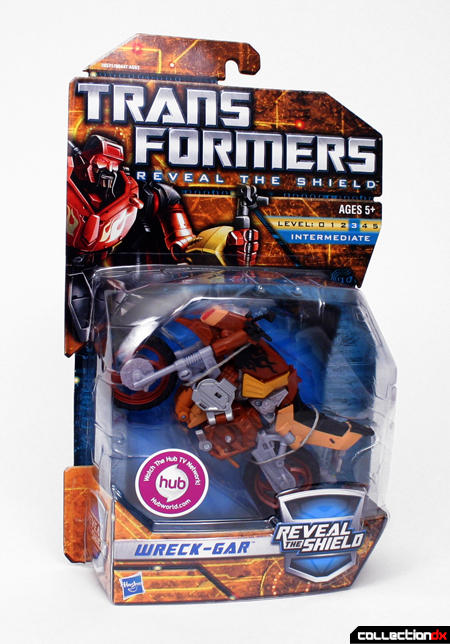 Note: the figure pictured on the back of the card has dramatically better finishes than the figure included. I imagine the pictures are of the Japanese version. 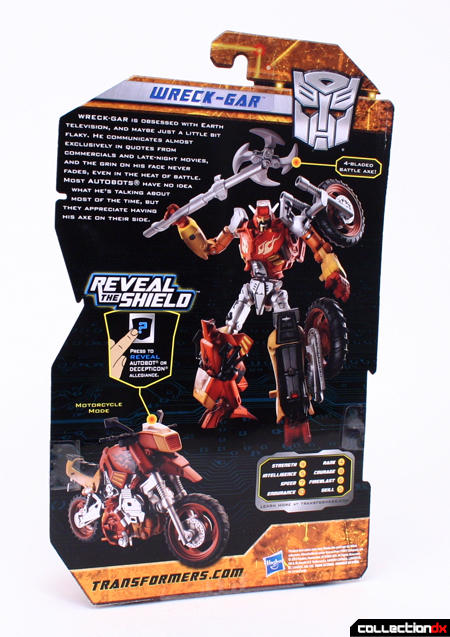 I was immediately blown away by the motorcycle mode. I am something of a transforming motorcycle connoisseur. The motorbike is a very limiting, difficult alt-mode to manage with finesse, but this piece is among the best. The bike is well detailed, tightly constructed, and entirely believable. If I were to nit-pick, I would prefer to not see the hands peeking out from under the gas tank. 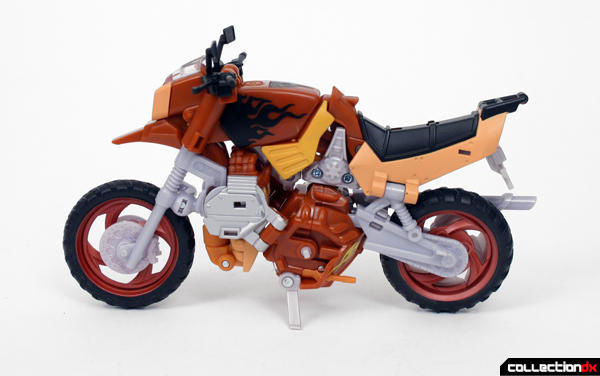 The toy feels a little lightweight for my tastes, but it is still sturdy. The paint apps are respectable but not unusually special. 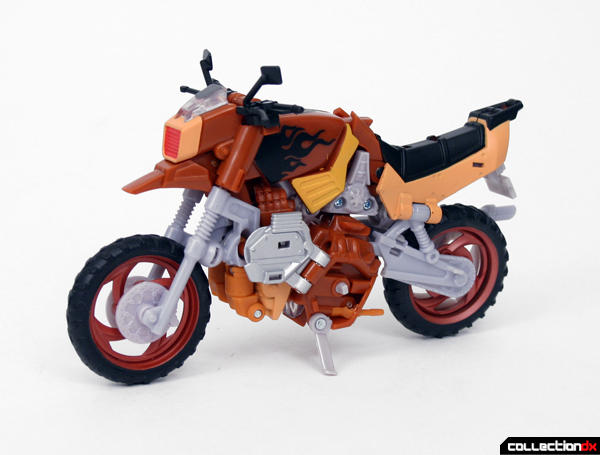 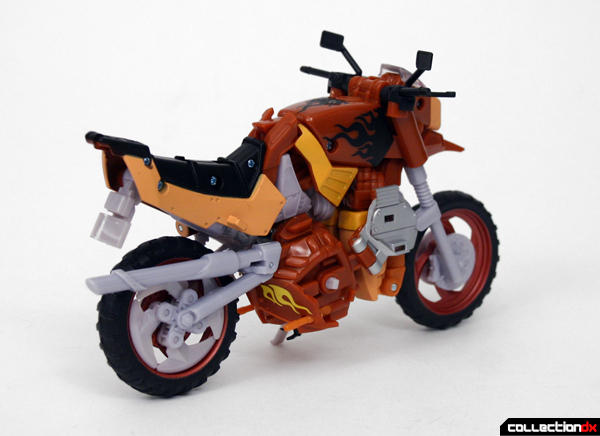 The RtS series features classic G1-style rub signs! I like the use of clear plastic at the cowl. 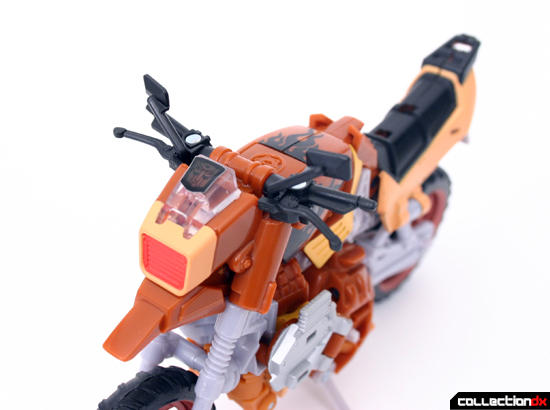 Tranformation into bot mode is...involved. First you remove the tailpipe and disk-break assembly from the rear wheel. This will become an axe later. 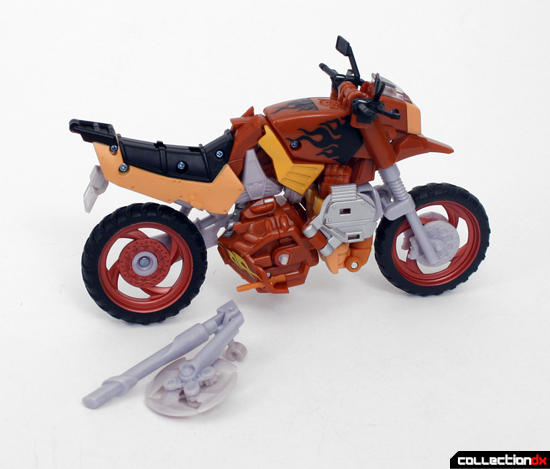 I am entirely impressed with the engineering of the transformation. Its organization is totally unique to motorcycle transformers as far as I know. Splitting the legs between the seat and the gas tank/cowl, while placing the torso in the engine block, is a real innovation, and well executed. 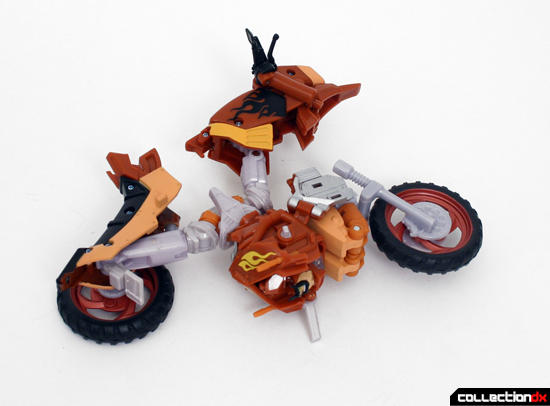 The resulting figure is excellent. The proportions are perfect. The fit and finish are tight. I’m a little on the fence about his face, though. It’s almost too human. It kinda looks like a robot with the face of a murderous biker (or possibly Frank Zappa on PCP), which maybe they were going for? 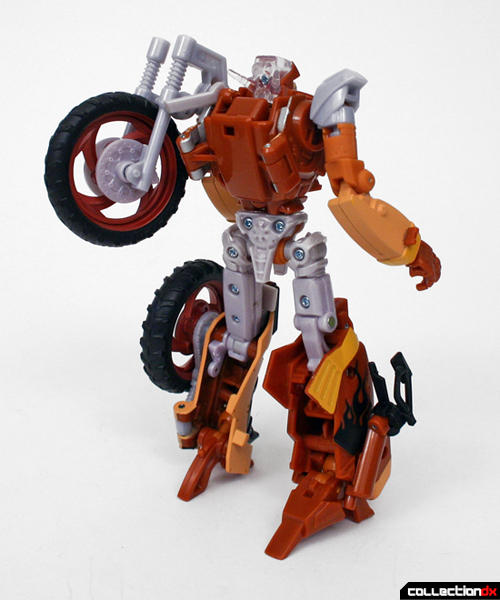 No matter, it’s a beautiful design. The figure is a case study in the appropriate use of symmetry and asymmetry in design. Materials and finishes are well balanced. I like the use of clear plastic for the back of his head. The handlebars are rubber, which is a thoughtful detail. How many transforming motorcycles do I have with broken handle bars? 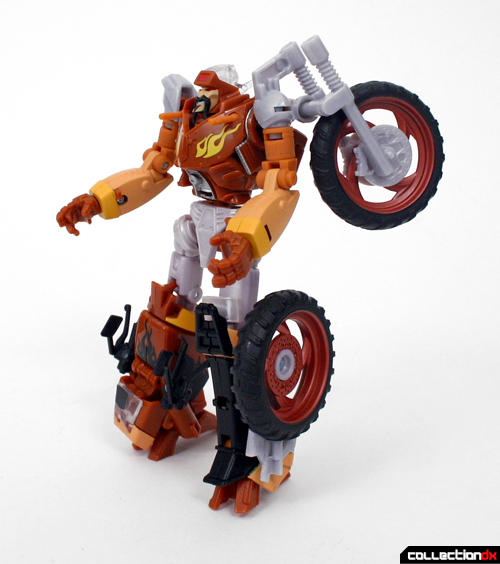 The tailpipe we removed unfolds to become an axe. The blades are geared into each other so that they all rotate out at the same time, like a camera aperture iris. 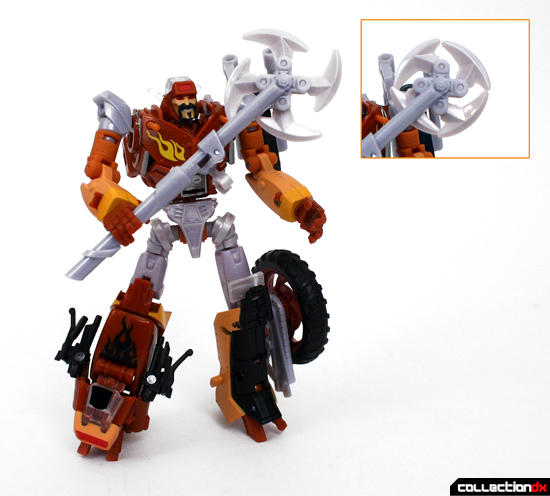 The axe can be mounted on his back. 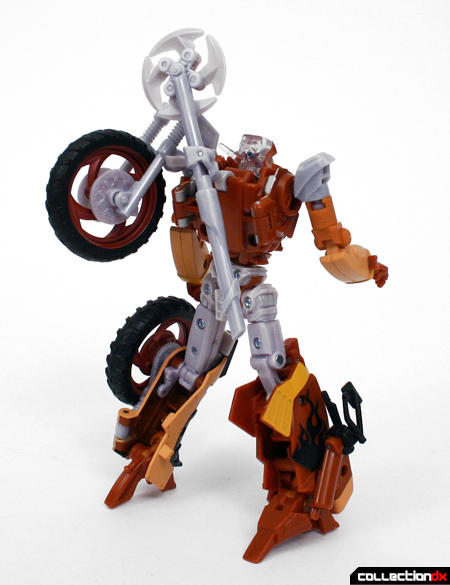 Poseability is par for a modern TF. Wreck-Gar can do almost anything you’d like him to. The joints are all fluid and buttery. 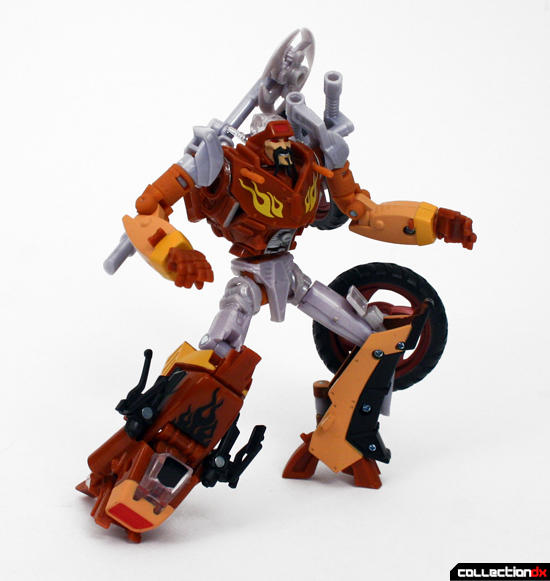 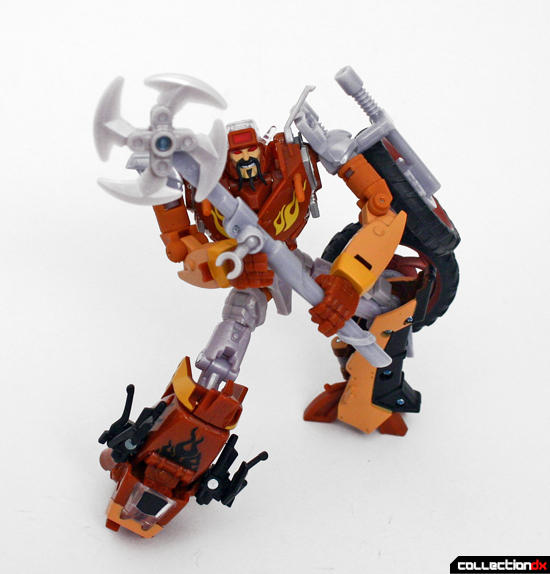 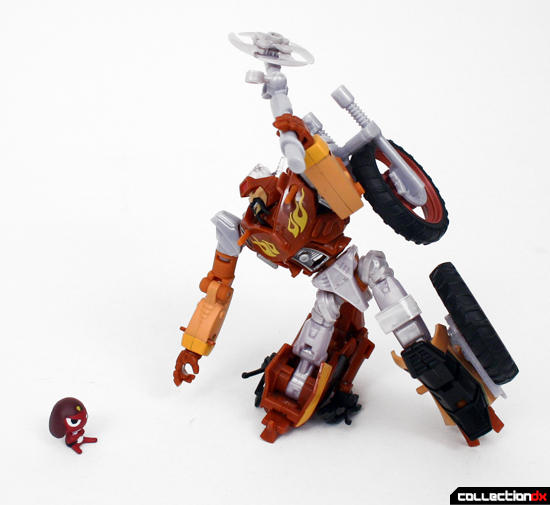 Let’s compare the two; I know it's not fair. I am embarrassed for poor G1 Wreck-Gar. He does have a certain quaint funk, though. 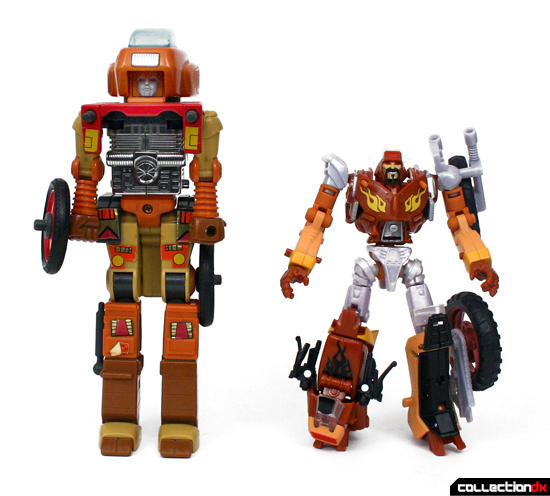 Reveal the Shield Wreck-Gar is a real gem for old fans and new alike. Its very existence is proof that, on many levels, TakaraTomy and Hasbro really “get it.” 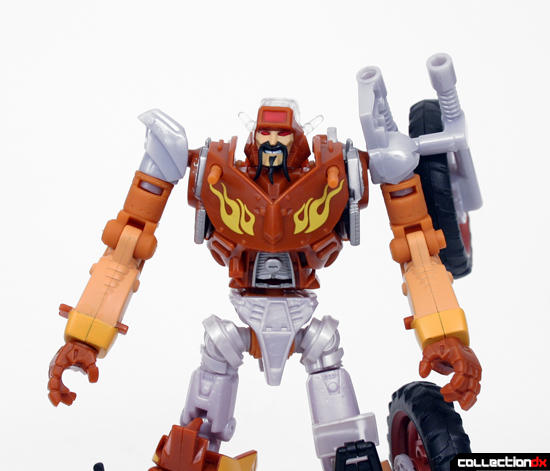 *Hasbro also released a solid Wreck-Gar figure for the Animated Series, albeit in garbage truck form.

Ima Trans-fan with no memory of Wreak-Gar since I never saw G1 and I didn't get the toy. No nostalgia for me to draw on there. I only know him from TFAnimated (and even then, "meh").

That being said, I like me some asymmetry in transforming robos, but usually when it involves a combiner. Balance of style is important to me when a[ny] transformer doesn't combine but is asymmetrical. If there's too much junk or bulk to one side, it doesn't work!
I gave RtS Wreak-Gar serious consideration and saw him in person a number of times, but in the end I decided it just wasn't for me. One big reason was that the legs are too lop-sided, and the other is that he has a highlighted beard and mustache. Nice vehicle mode (I'm not into motorbikes), and the sculpt looks fine, but... ehh, I couldn't do it.

I'm a sucker for Transformers who can seat a GI figure - I love that Oil Slick and Prowl from the Animated series are both sized properly for a Joe figure - and I'm really looking forward to SEEING Wreck-Gar at retail - but I need to know if you can throw a 1/18th scale figure on him.

I'm gonna have to wait until the first few waves of Transfans get theirs because I'm tired of chasing figures down. Did it for a while, realized I spent too much on gas only to end up finding nothing. Then a month later, they have 10 pegs of the same figure. I think I could be patient enough to get this guy...maybe

A few of CDX's reviews re-sparked my interest in the G1 "classics/generations" series. Now a few months later I remember why I stopped getting them to begin with: they're impossible to find at retail, and you will on average pay 50%+ markup.

Now I'll gladly pay a premium for vintage. I've gladly paid finder's fees to stores and friends on forums. I just last month paid an overseas friend's bus-travel expenses for the next three weekends so he can find a few rare pieces I want at the local market in his town. I'll pay BBTS or ANGOLZ extra money for imports. I'll pay a premium for older toys without complaint.

But I refuse to pay a premium for a new toy on ebay or elsewhere, just because someone was faster to Target then I was. That is just stupid. If you buy it from the scalper, rather than the retail store, the retail store doesn't know you want to buy them, and won't re-order.

Here in NJ, it is pretty common on Monday morning to see at various Targets and WalMarts, scalpers with carts FULL of toys, doubles, triples. During Christmas this year, a guy at Target didn't even wait to pay for his Reveal The Shield Jazz before he put it up on eBay. I stood in line behind him and watched him put it up for sale with his iphone, even before he had checked out of the store.