The warrior alien is the generic alien seen in the Aliens Vs. Predator movies. The Warrior comes packed in the standard Neca clam shell, with no accessories. 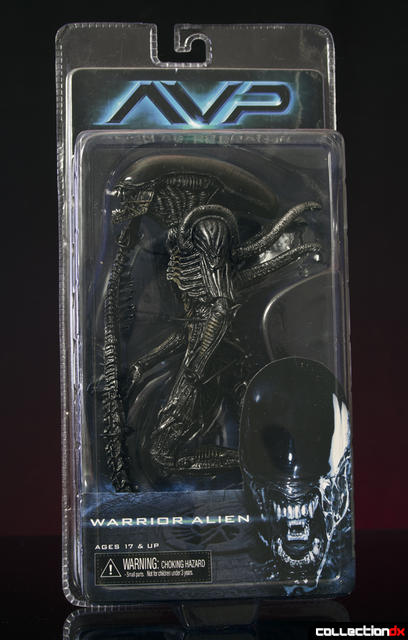 The Warrior is a completely new sculpt for the Neca Aliens line and showcases a new approach to engineering the line. With this release, extra attention has been payed to hiding joints and bringing a new level of realism to the figure, while also making the figure more pose-able than any other before it. 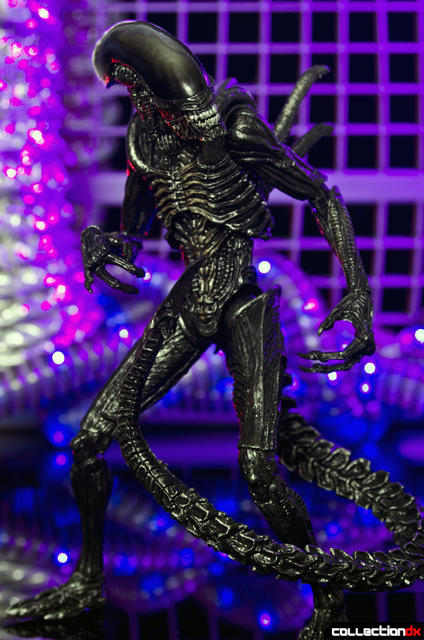 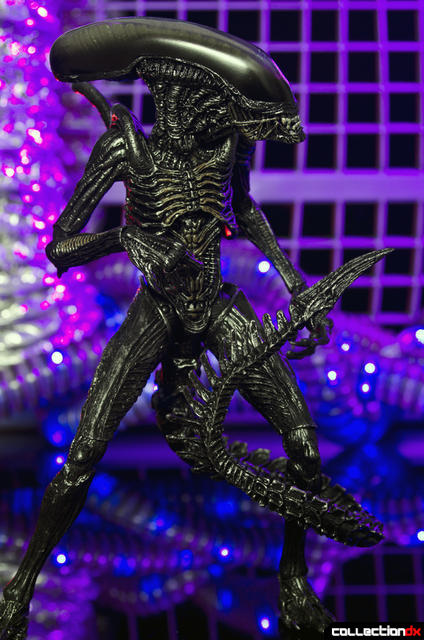 The Warrior Alien stands 9 inches when standing in a static pose, making him the perfect scale for Neca Predators, or other 6 inch scale figures. 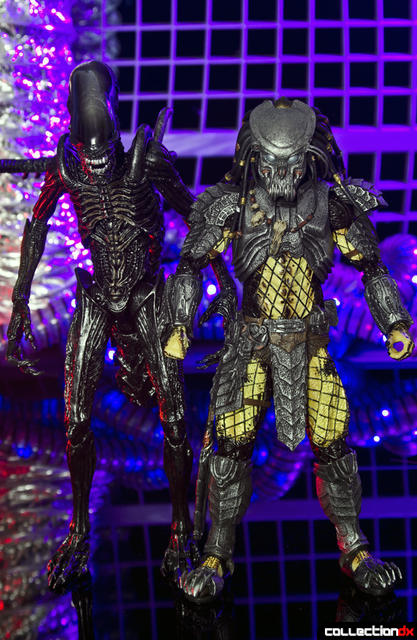 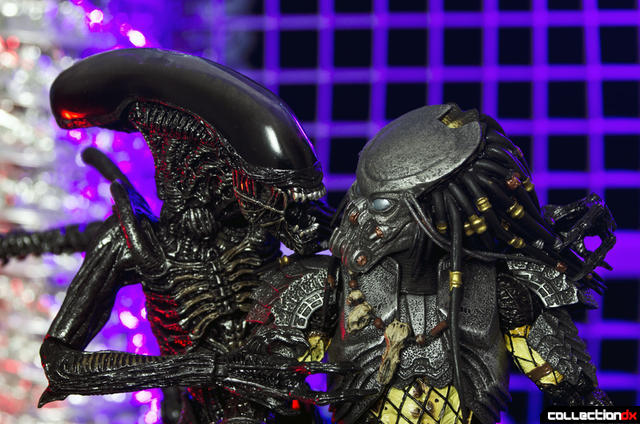 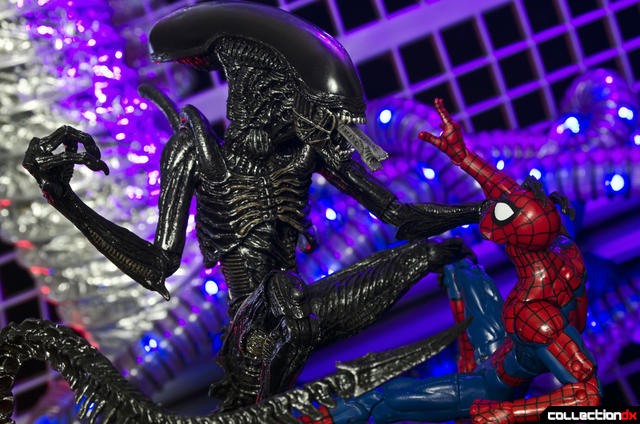 As with the AVP Predators, the AVP Alien warrior brings with it a host of improvements to articulation and paint. Neca did an excellent job of concealing all of the joints in this figure, while at the same time, managing to maintain, and in some cases, improve the range of motion. Neca did an excellent job of blending the elbow and knee joints into the rest of the sculpt. 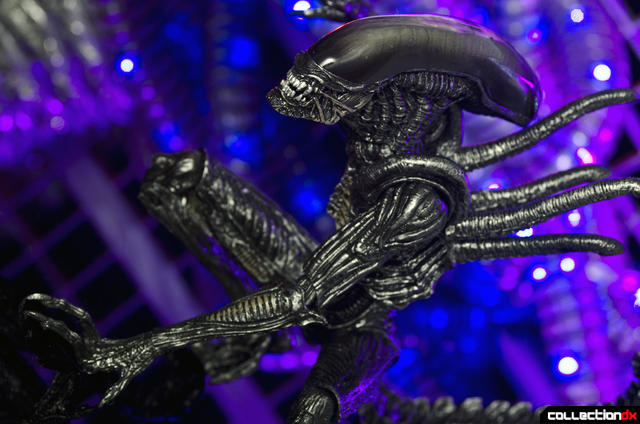 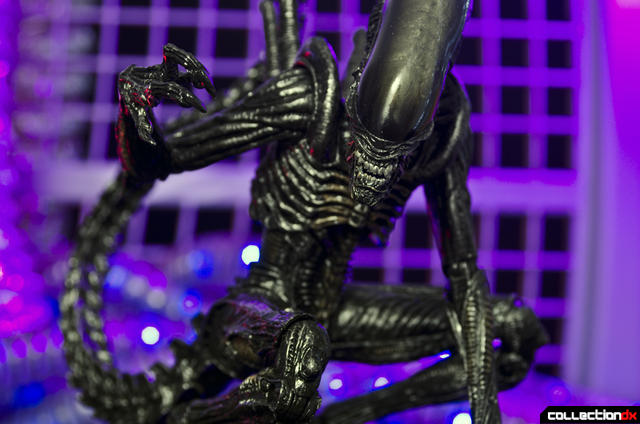 Also new to this figure are hinge joints for the middle two fingers. 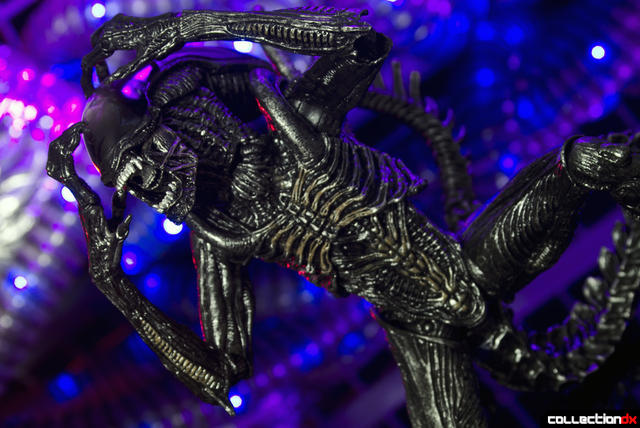 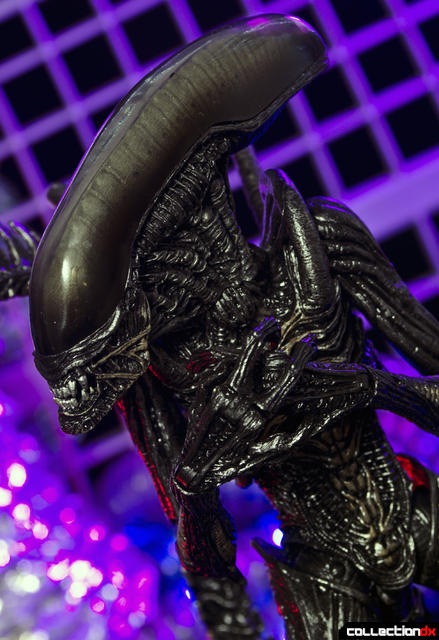 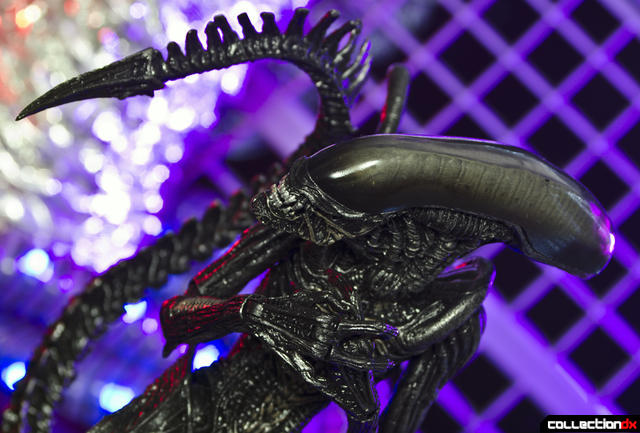 Let me preface this next part by saying that this might be the best Xenomorph that Neca has put out, but before I go getting all mushy over it, let me lay out the problems I have with it first, and just fair warning, this is going to be a wall of text.

Unfortunately, this figure carries over some of the things I disliked about previous Neca Alien releases. The ankles are on ball joints and have a limited range of motion. The head is also on a ball joint, and while it has very good backward range, it can't be tilted very far forward, and lacks any usable side to side motion. On top of that, all of the joints save for the shoulders are looser than I would like, The knees and hips are loose to the point where the figure can have a hard time supporting its own weight.

The loose hips are a product of the way they are engineered. Instead of having each hip joint plug into the torso, or hang on an internal T joint like every other action figure in the world, Neca opted to have the hips plug into each other through a hole in the bottom of the torso. The right leg has a large female peg that fits through a hole in the torso and the left leg plugs into the female portion of the right leg. The problem with this design is two fold. First, there isn't enough material making contact for sufficient friction, so the joint is loose. Secondly, being that the left leg is plugged into the right, when you move the right leg, you also move the left leg. They can be moved independently, but if the right leg is moved, the left leg will have to be re-positioned.

How do I know the hips are set up this way? Well, because my grid alien came broken in the package (Neca shipped me a free replacement immediately after I contacted them). 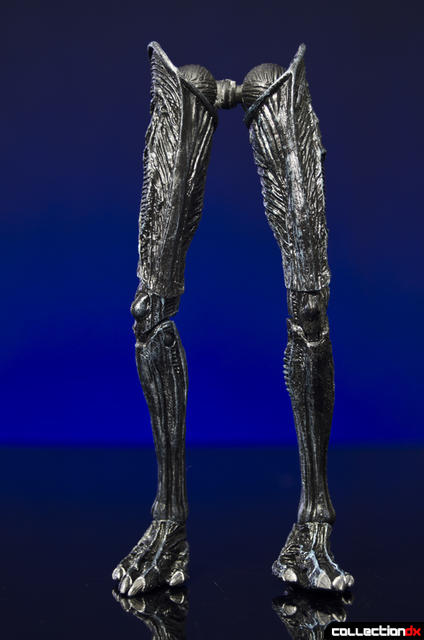 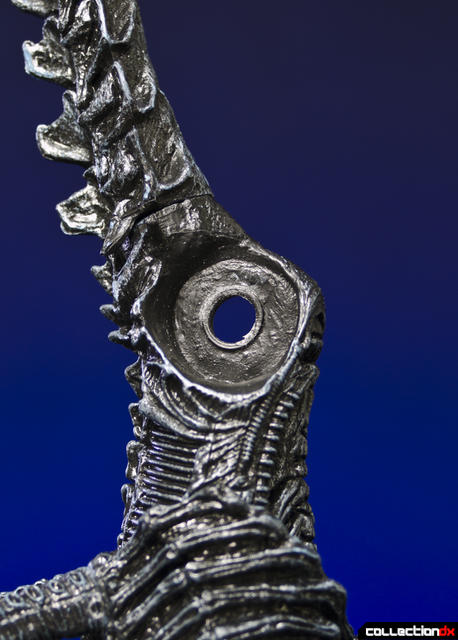 Balance is also an issue, which is inherent to the Xenomorphs design. While that's not Neca's fault, the loose leg joints don't help. This is not a figure that will stand unsupported for any extended length of time, however if the tail is used as a make shift "third leg" its much more stable. I would chalk these issue up to being just one bad figure if A: every other Neca Xeno I've owned didn't have the same issues, and B: both the warrior and Grid Aliens I bought from this wave have the same issue.

That said, the tail on this figure is considerably longer than in previous releases and that helps to offset some of the balance issues. 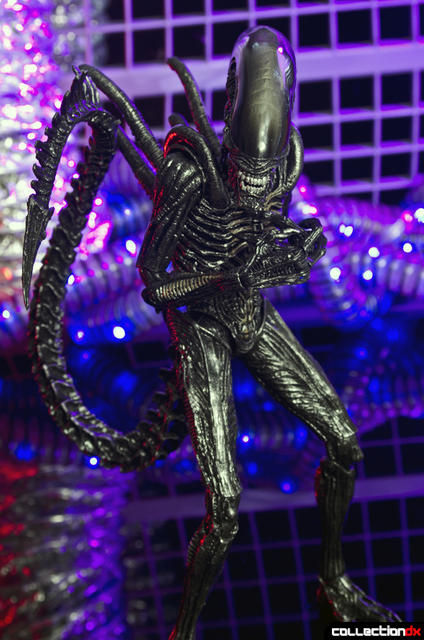 Ok, still with me? Good. If it seems like I'm being overly harsh on this figure, its only because everything else about it is just, so, GOOD. The sculpt and paint are both next level. Neca really pulled out all the stops. I'm just speaking from my own personal opinion here, but I think this figure blows everything else in this scale away, just in terms of sheer eye appeal. The only figure that even comes close to looking this good, is the 1/6th scale Hot toys. 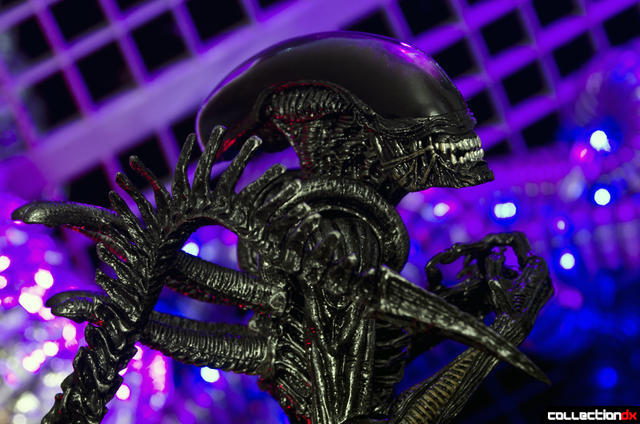 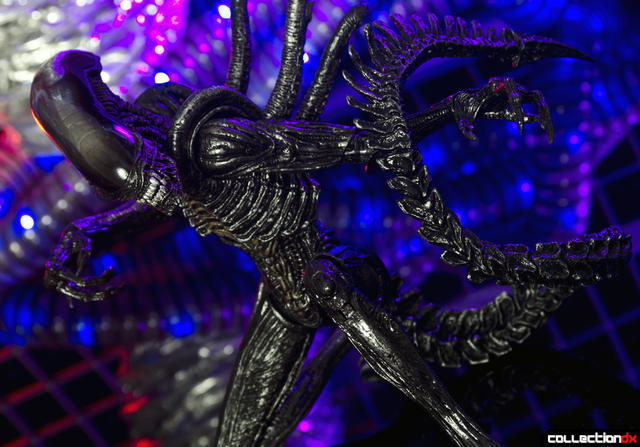 Where as the dry brushing on previous releases was a bit heavy handed, the paint on this figure is outstanding. There are subtle shades of brown in the chest, legs and arms and silver dry brushing over the entire figure that does an excellent job of making the detail in the sculpt pop, without looking caked on. 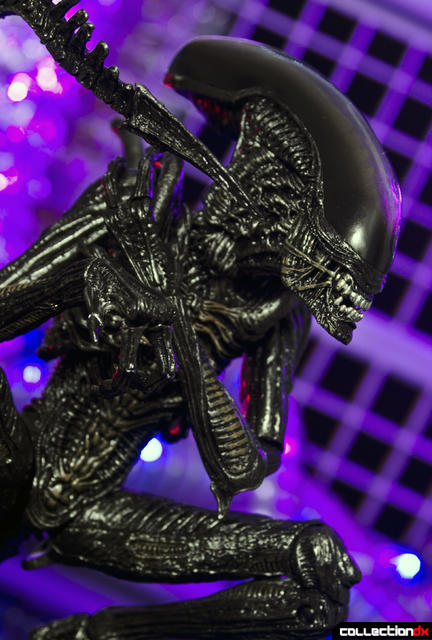 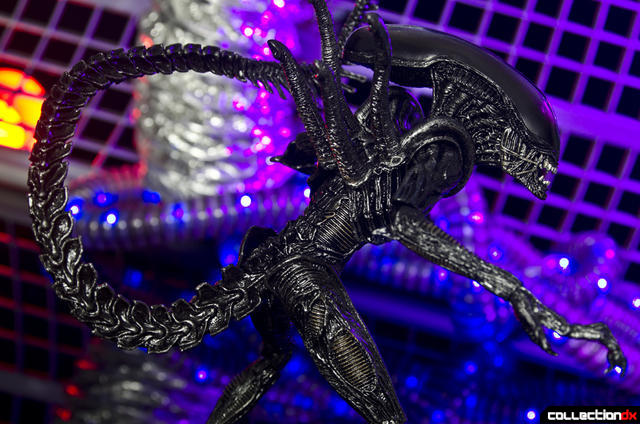 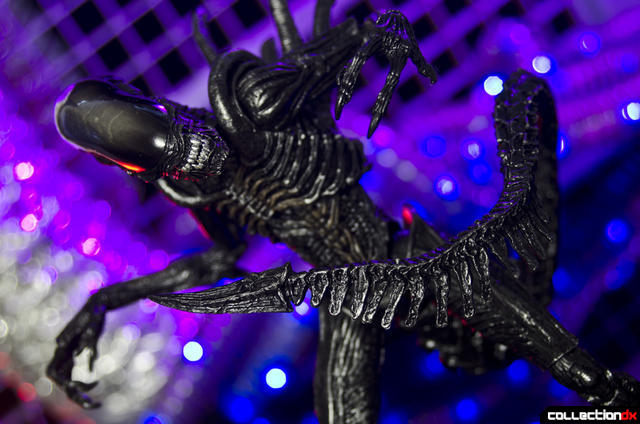 The proportions are just so perfect, and really do an excellent job of conveying the lithe, deadly feel of the Xenomorph. 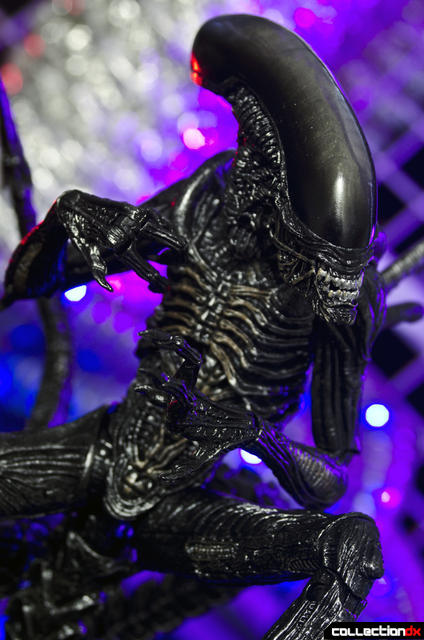 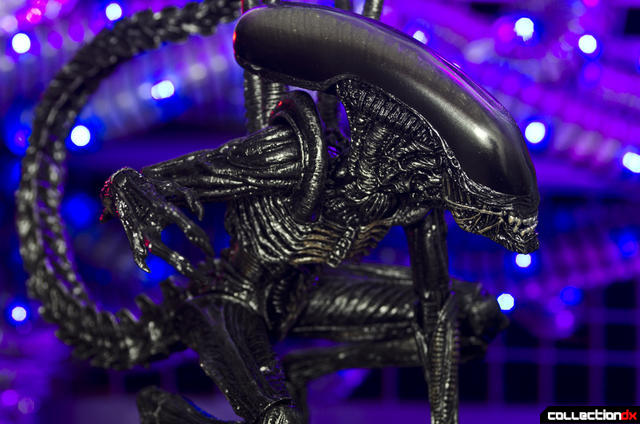 The entire figure is covered in sculpted detail, down to the elbow and knee joints, and the backs of the dorsal tubes. There isn't a spot of flat plastic on this figure (save for the dome...). 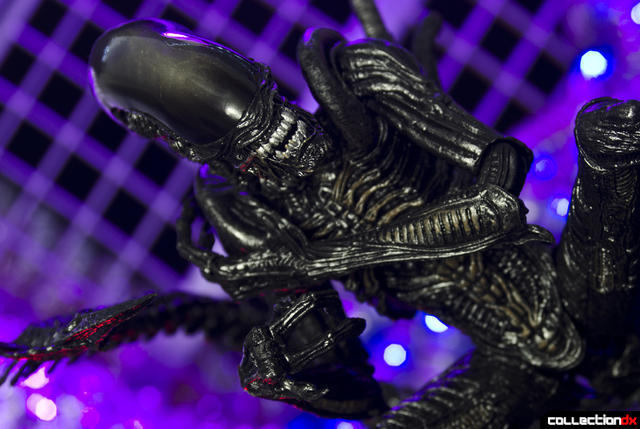 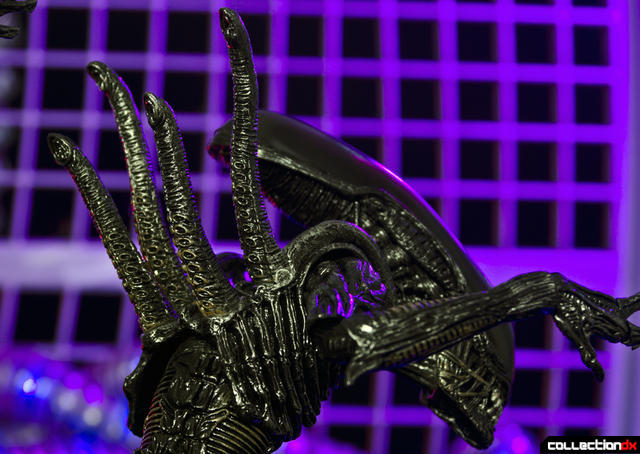 The head in particular is very well done, it features a translucent dome, and articulated lower and inner jaw. Neca did a really great job of reproducing the Xeno's iconic curled lip snear. 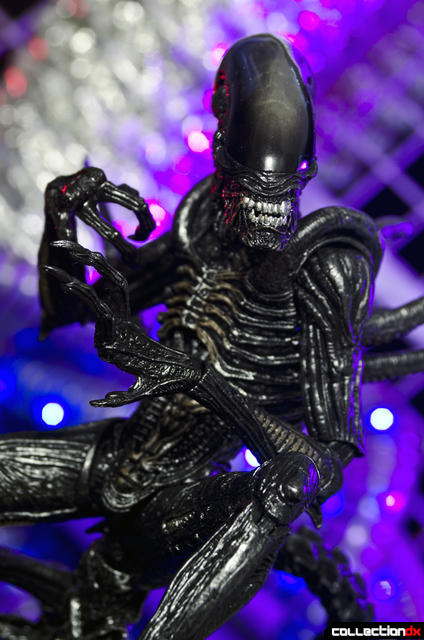 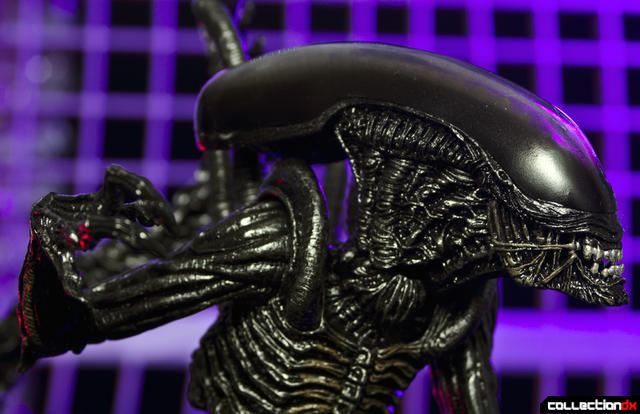 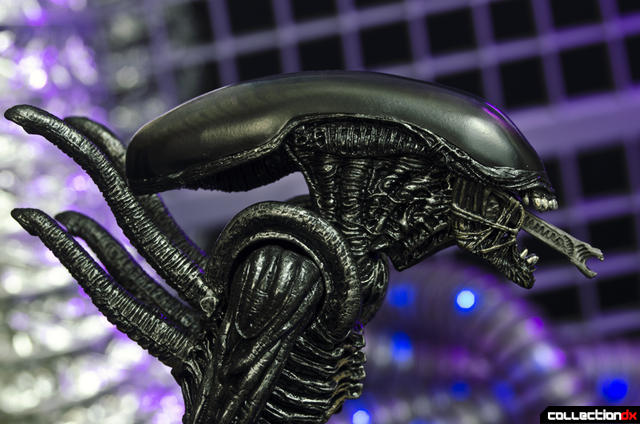 While the figure isn't perfect, I think there is enough here to like that the flaws can be forgiven, or at the very least, overlooked. The figure looks incredible and is enormously fun to pose. If you have enjoyed Neca's other Alien releases, or are a fan of the design in general, the Warrior Alien will surely not disappoint. 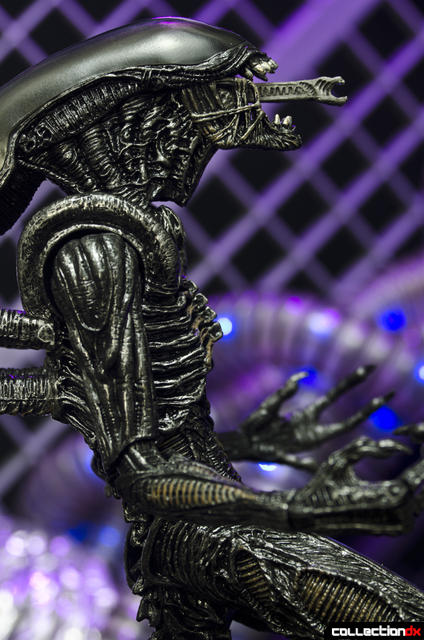 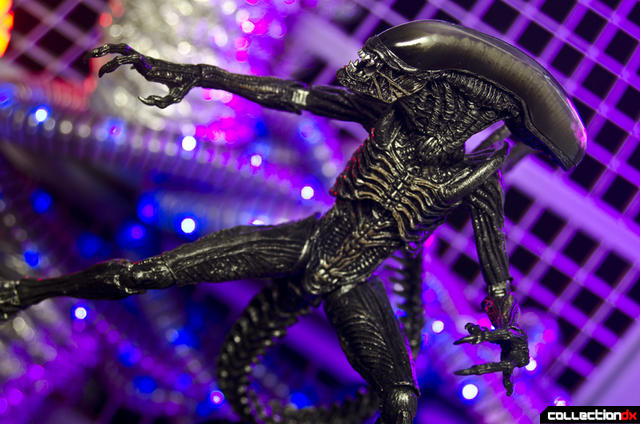 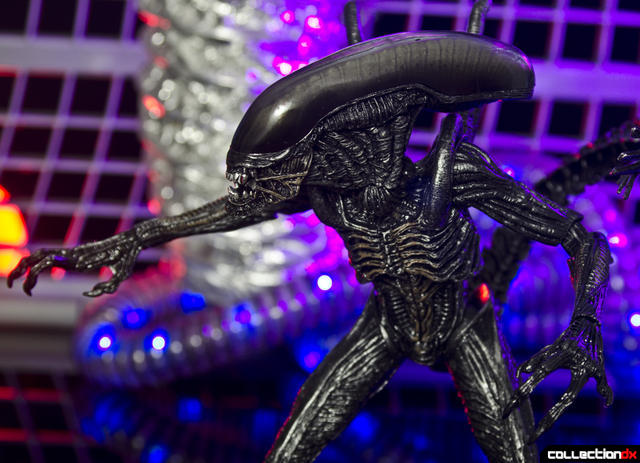