As a kid I remember that there was an Iron Man cartoon on TV early Saturday and Sunday mornings. However the time slot was erratic and I wasn't able to keep up with the story very well. Despite this, there was one thing that always stuck out in my mind that made me remember and love that cartoon. That was the character War Machine. I remember that suit of armor to this day fondly, and it remains one of my favorite parts of Marvel comics. So when I saw this version of War Machine on the pegs for the Iron Man 2 toy line, a huge wave of nostalgia hit me and I had to pick one up. 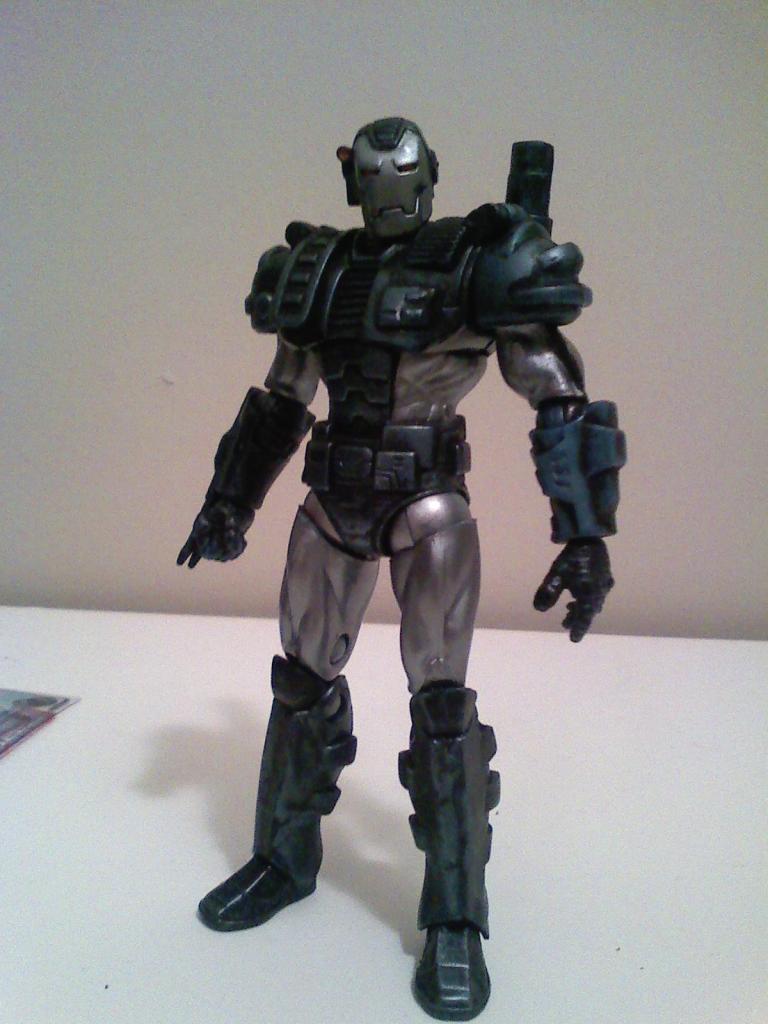 The sculpt on War Machine looks like it popped right off of the comic book pages. This figure is very bulky, and the suit is covered with muscles and details of Jim Rhodes underneath. I can't think of anything bad about the sculpt of this toy. It's exactly what a War Machine toy should look like. 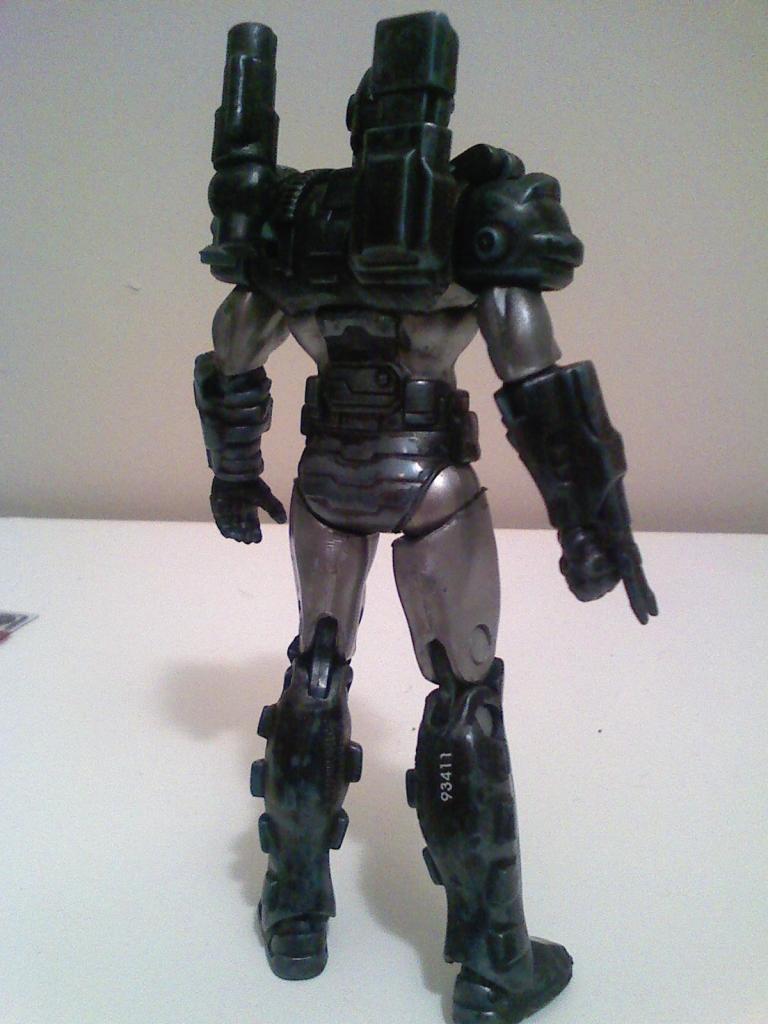 The head is very nostalgic for me and has the old frown along the mouth, along with the tiny sight on the right of the head. 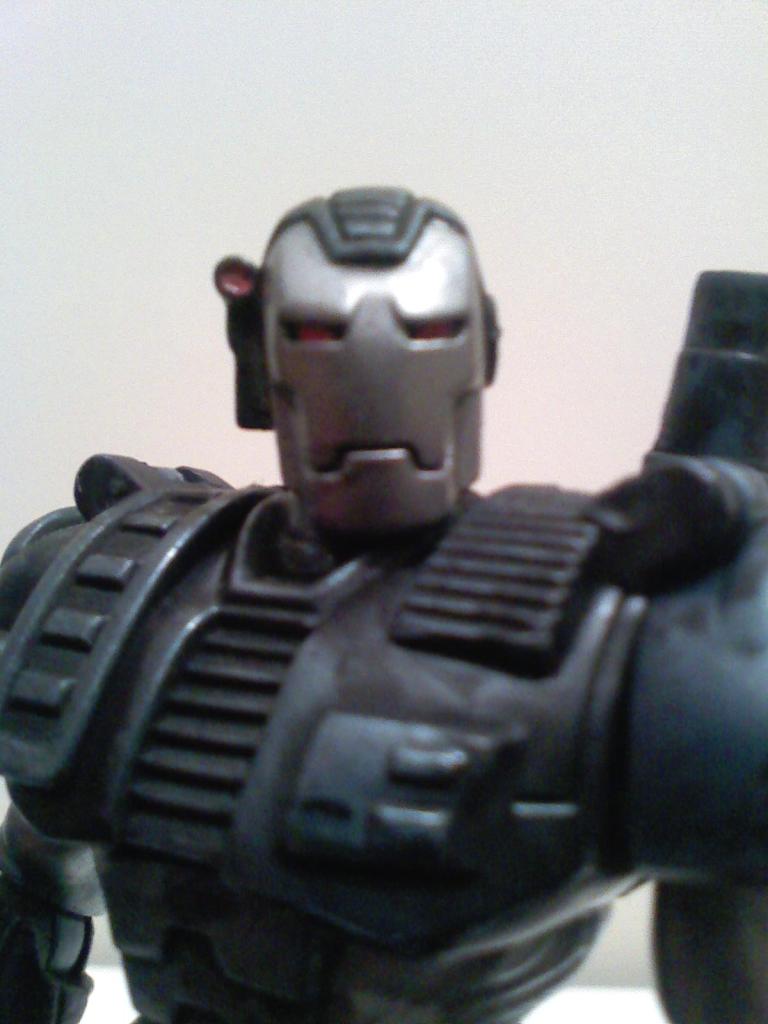 The armor itself is interesting in that for the most part, it's not symmetrical. The parts on the belt and chest are all different. It really helps to make this toy feel even more armed than before. There's a nice weathering job covering these parts as well. It looks aged, as if it's been out in battle. It's like my own aged memories of this War Machine, and it's beautiful. 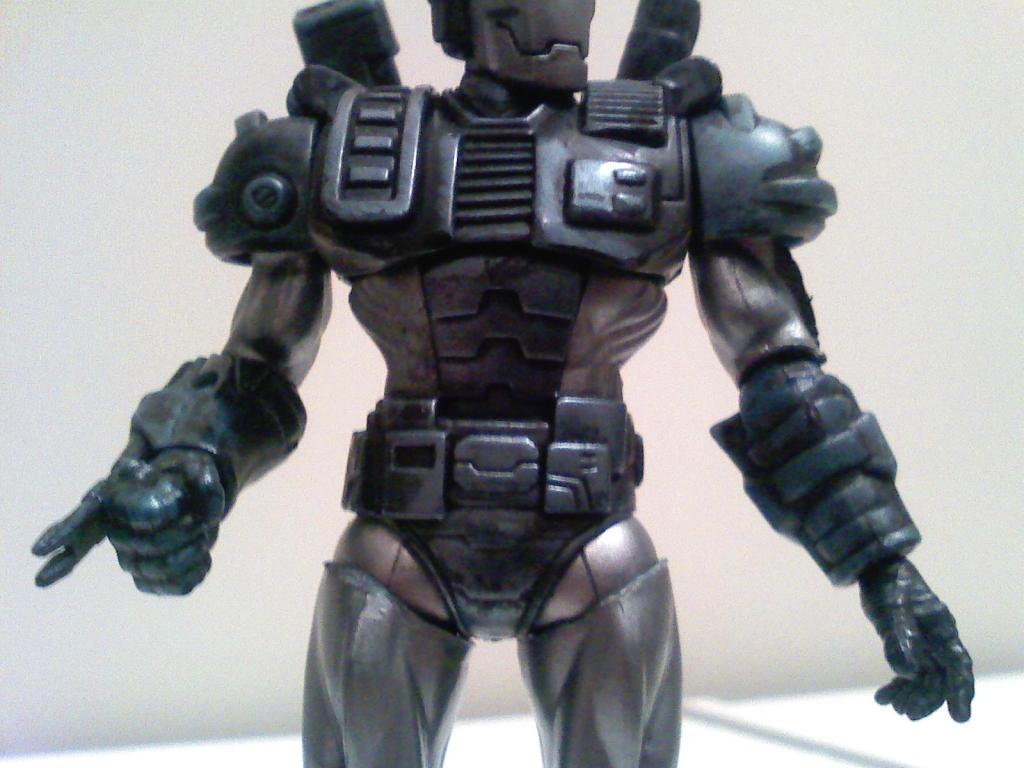 I was impressed by the articulation on this toy. The arms swivel and have lateral movement as well. The elbows are single jointed with a wrist swivel on both arms. The right arm however is hindered by the arm-mounted gun. It can still turn, but the plastic will bend a bit. 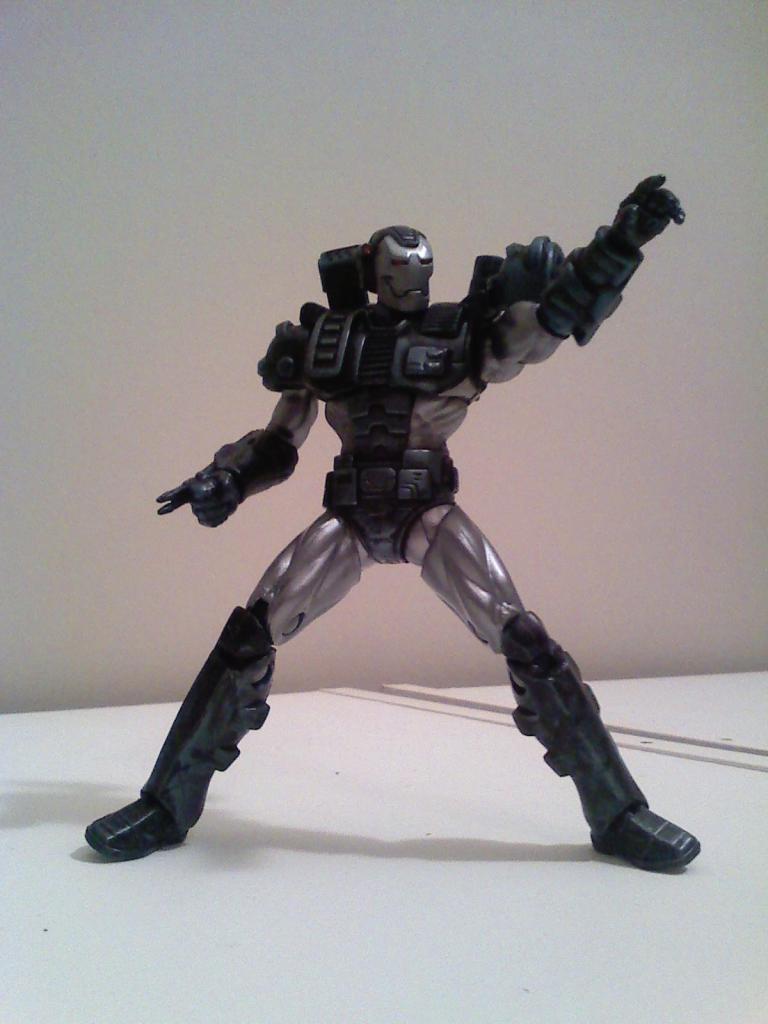 The legs caught me off guard, as I've never messed with a Marvel Legends figure before. It's a ball that swivels in a socket with a pivoting line inside of the ball. This confused me initially, but soon I realized that it's basically a Revoltech joint. You're definitely able to do more with this joint compared to a ball joint, and it's much sturdier as well. The legs are double jointed with a nice range of motion, and the feet turn left and right with a very nice swivel as well. 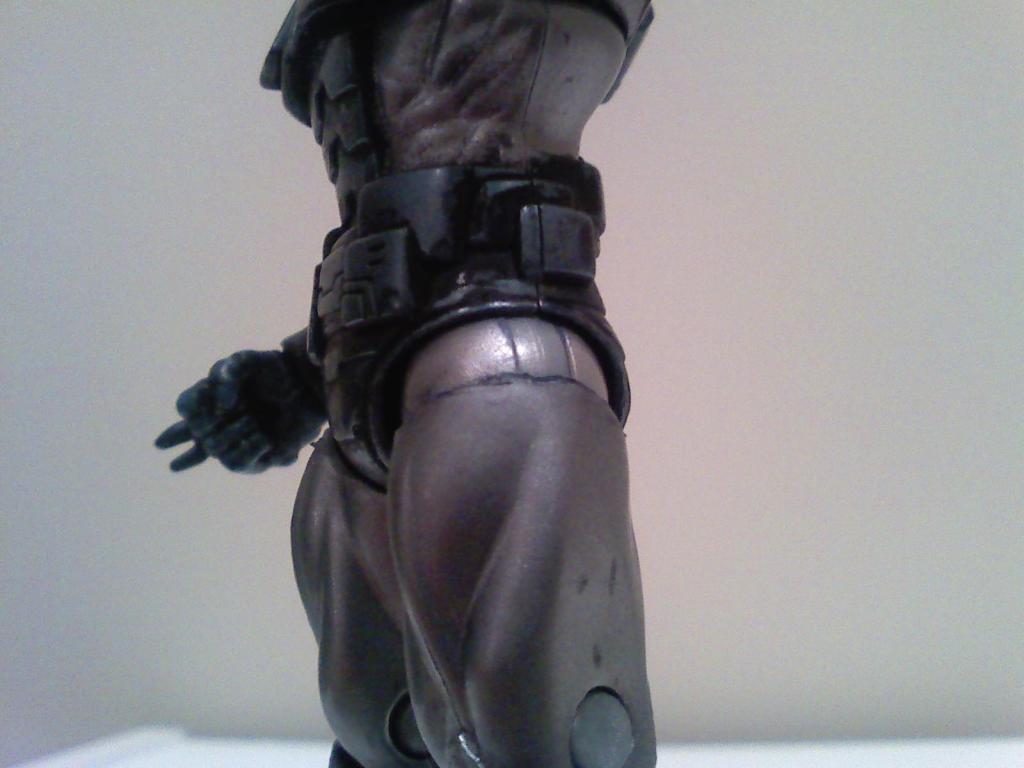 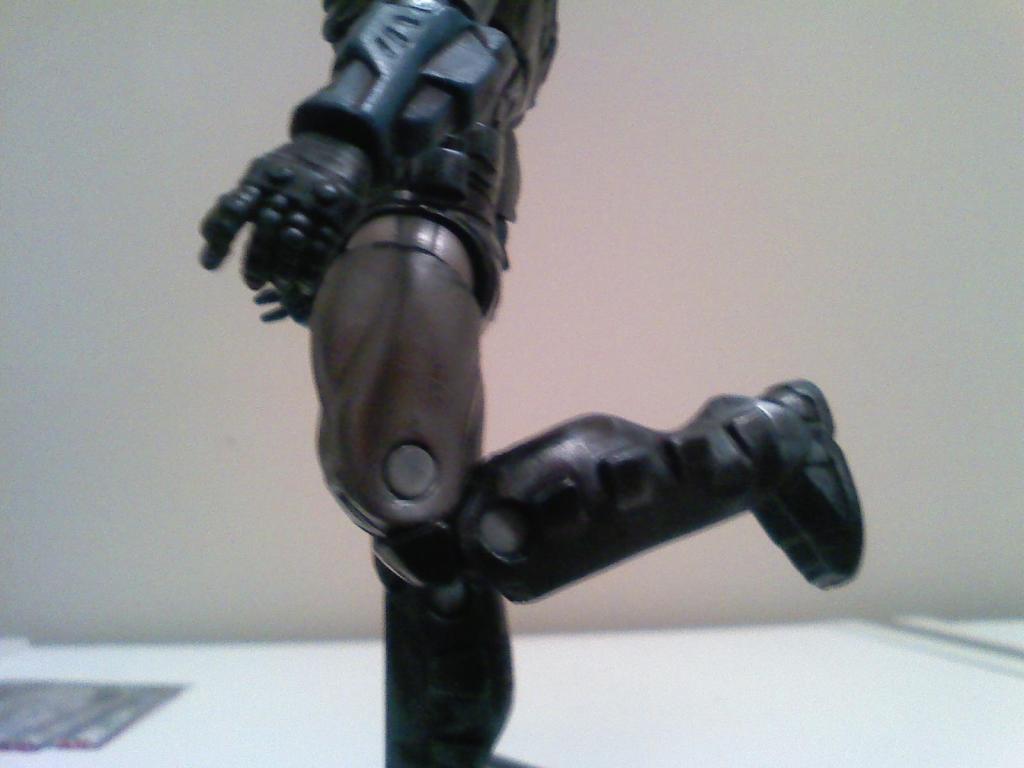 There's only one point on this toy that bothers me, and I'm alright with it as well. The shoulder pads are on hinges attached to the chest. If you pull the arm out, the shoulder pad raises naturally with no problems. However if you raise the arm forward, the pad does not rest flush with the rest of the toy. This makes it sort of hard to raise the arms of the toy. But at the same time, it looks so good when he's just standing there, that I'm alright with that sacrifice. 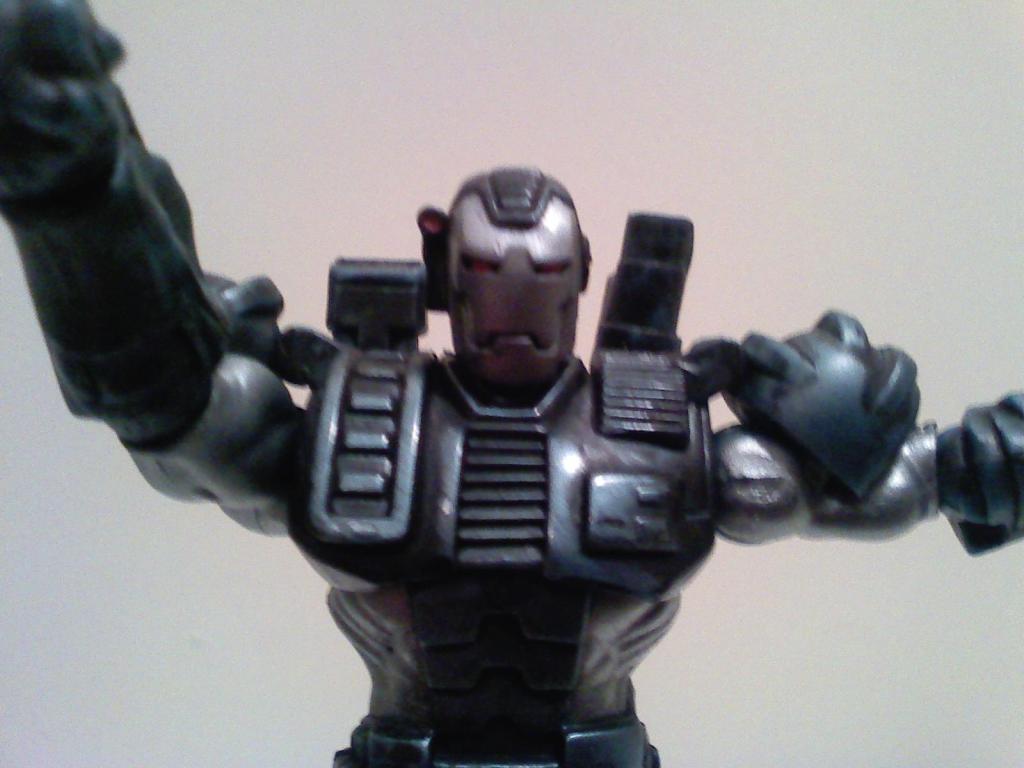 But what would War Machine be without weapons? Thankfully, this toy is not lacking in this area. He comes with one shoulder-mounted Gatling gun and a missile pod. These both rest on ball joints and can swivel so that they're up against his back, or deployed for battle. 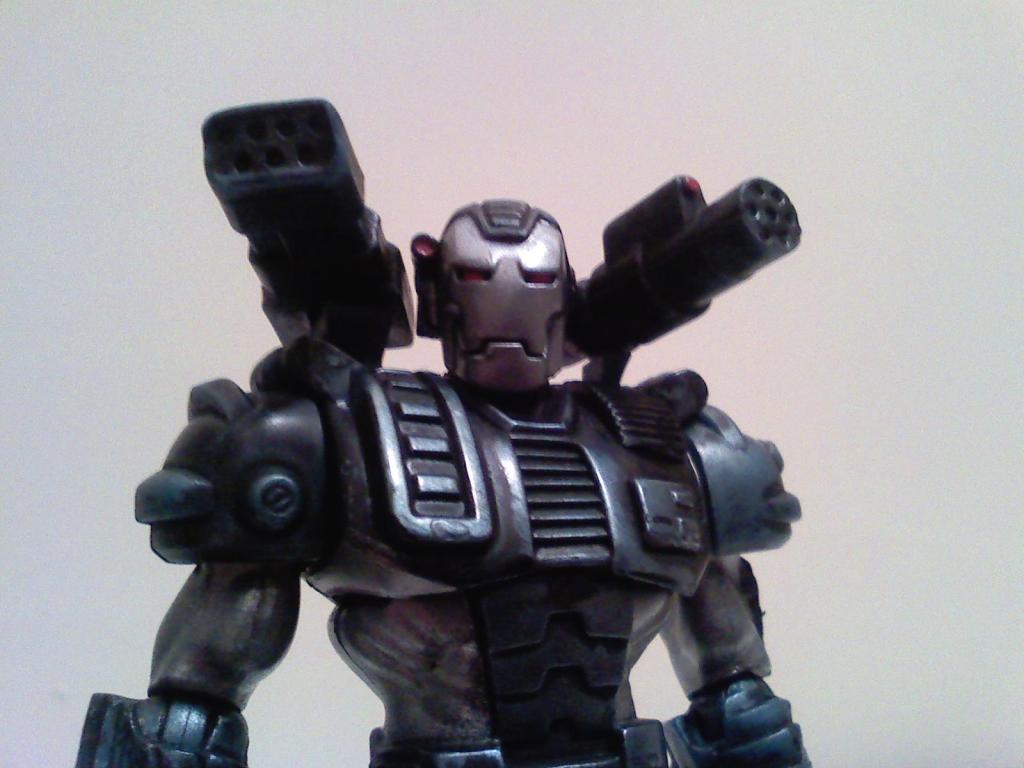 War Machine also comes with several accessories. He features two effect parts for his weapons, a set of cards, and a stand. 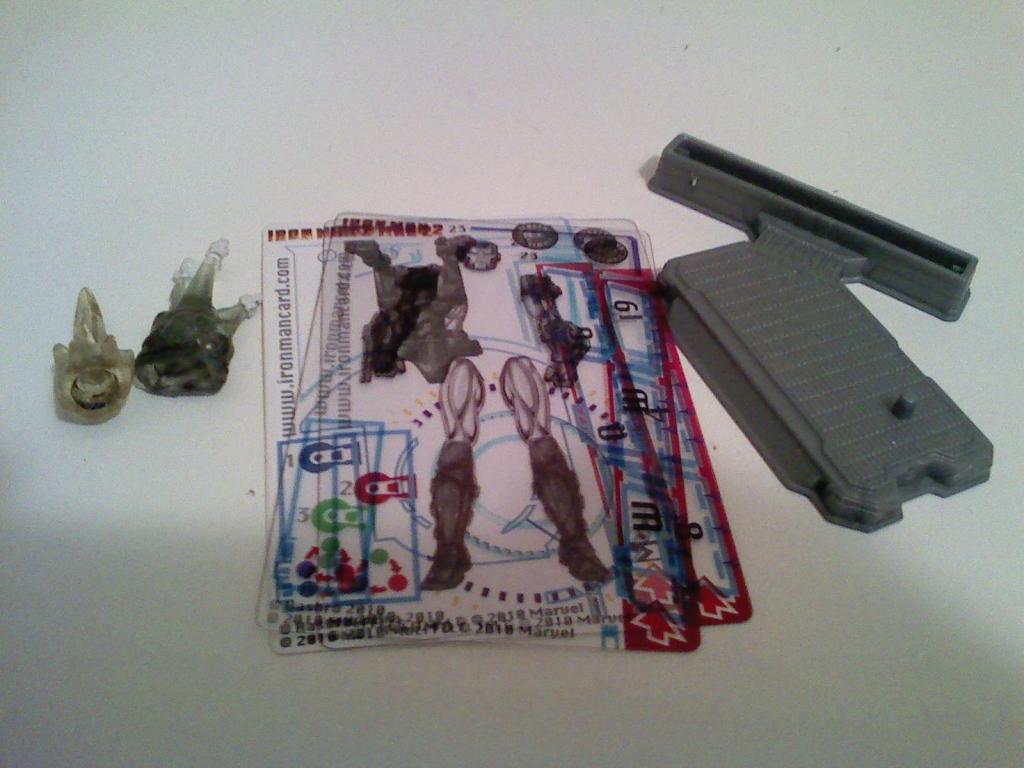 The effect parts plug into the front of War Machine's gun and missile pod to give off the effect that his weapons are firing like mad. These are incredibly nice and really add that extra touch that makes this seem like it's from a comic book. 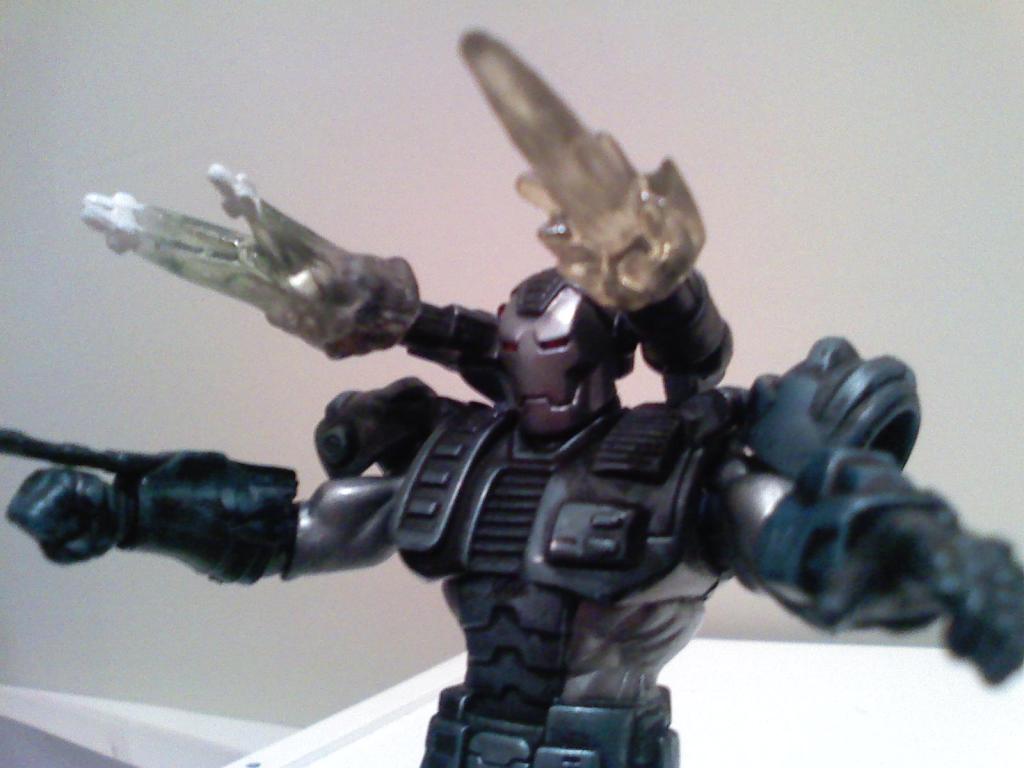 There are three cards that come with War Machine. One for the torso, and two clear ones for the head and arms, and legs. Once you line these up they form a complete picture of War Machine with several codes along the side. There is a website known as Ironmancard.com listed on the side of the card, but this just directs you back to the Marvel website. It'd be nice if this site was up if the were going to have an online tie-in with this. Regardless, the cards are nice schematics that can plug right into the stand as well. The stand has a single peg that plugs into War Machine nicely. 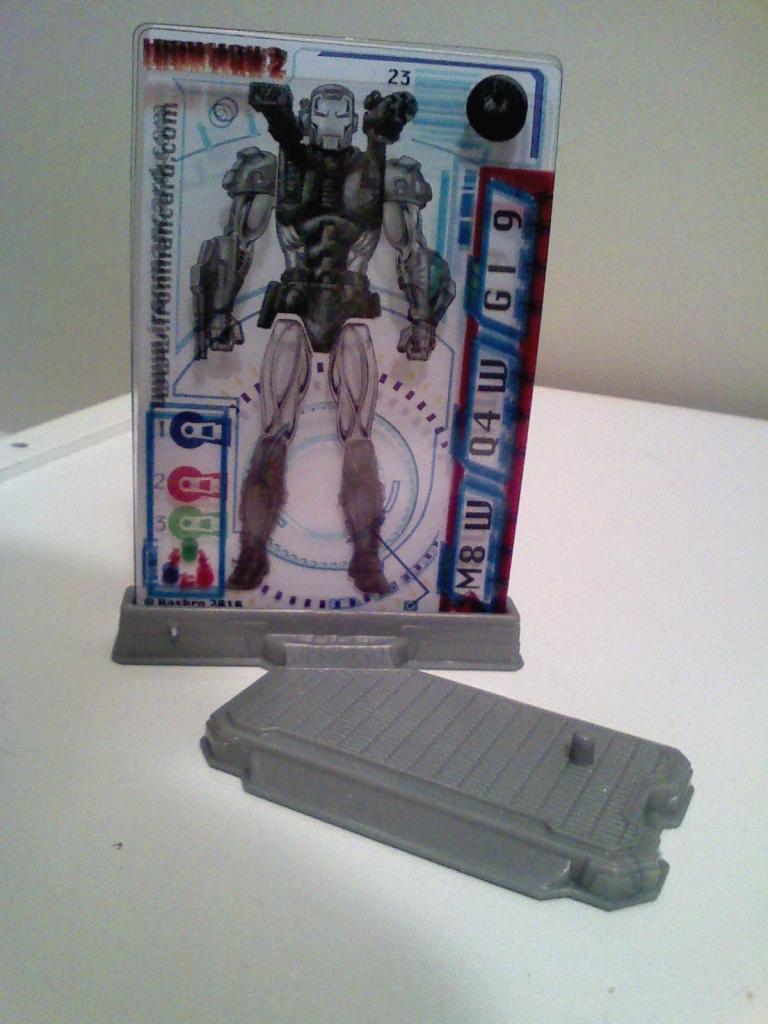 I absolutely love this toy. It's everything a War Machine toy should be and I highly recommend it. If you want an older version of War Machine, pick this one up. 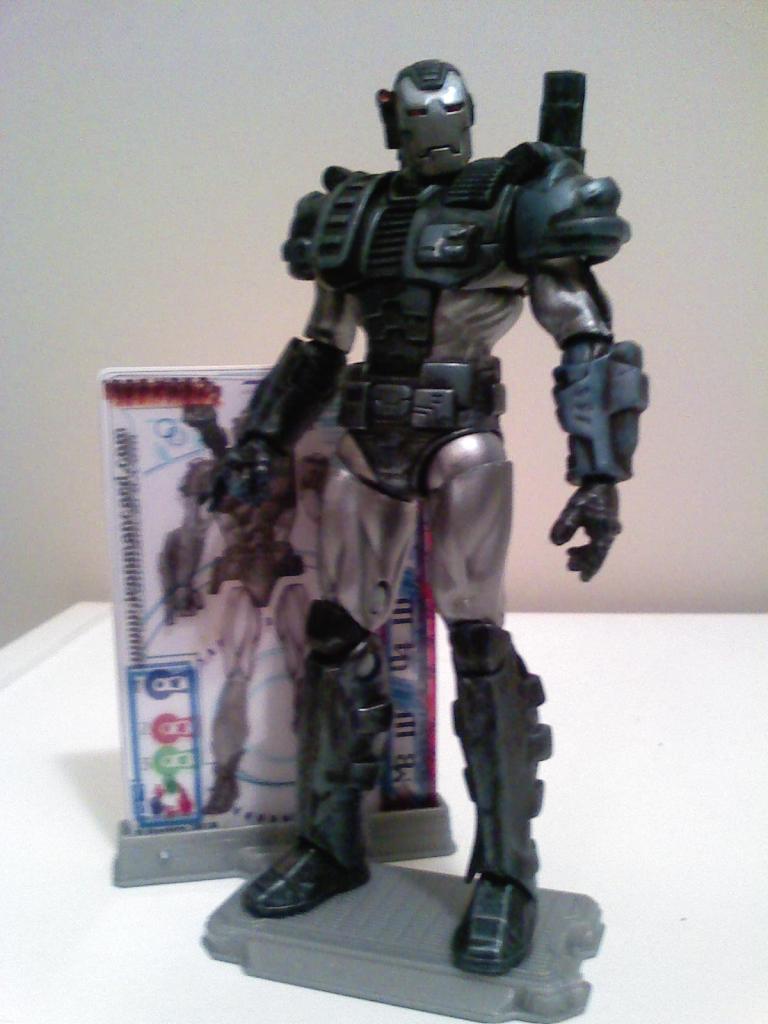 This toy seems really kick-4$$, the way a War Machine toy should be. Good review.
Of course, I feel a little old now, since you were a kid watching War Machine on TV, and I was a kid reading about Tony Stark building his third or fourth suit of armor, still needing to wear the chestplate all the time to keep his heart going, and Rhodey hadn't put a suit on yet. I'm still young enough at heart to love this toy, though.

Did Stark ever get rid of the shrapnel/bullets in the comic(s), or was he permanently like that? I know he wore a metal vest with the magnet in it, unlike the film where it's just that smaller thing carved into his sternum.

He must have by now, but I haven't read a Marvel comic in many years. Except Thor, and The Twelve, written by J Michael Strazcinski.

The shrapnel is no longer a factor. But due to various story arcs a reactor is now back in his chest.

It's really a nice toy, but I don't like the shoulder pads, especially if it moves forward. It feels like the toy's attack position is done by their right or left side of the body.

I went for the modern "movie" version of War Machine. If you think the original version looks good, you'll be amazed at the new one! It is awesome!

Yes, I intend to review him next in a couple of days. He's very nice.

I thought about getting movie-Iron Monger w/opening torso, but couldn't bring myself to do it. The paint apps seemed kinda flimsy.

Stumbled across a full assortment of the entire first wave before anyone was talking about them, a while back, and was pleasantly shocked. These are much better sculpts than the comparable Marvel Universe figures.

Decided on this figure (over the movie War Machine design), Crimson Dynamo, and the First Appearance armor--all comic designs. For an armor junkie, these are very faithful to their comic origins. And the size and price point make them much easier to collect and display (although all 3 are played with constantly at my place!).

@seraph
I'm with you. When I think back to the Iron Man cartoon I watched as a kid, it was this:
Iron Man Cartoon theme