Long Haul is the postman of the Decepticons. He hates his job, but he’s so good at it that no one can see him doing anything else. In truth, he’d love to mix it up with Autobots, and the menial task of hauling cargo all over the galaxy really grinds his gears. Fortunately, space is vast and dangerous, and when he’s in a particularly foul mode he’ll dump his load for just the chance to take even a pot shot at a passing Autobot scout. When interrogated as to why he doesn’t have his load, Long Haul simply states that he lost it due to atmospheric interference or an errant meteor shower or he made a wrong turn at the last nebula. What makes matters worse is having to team up with a bunch of mind-numbing yahoos like Rampage, Hightower, and Scrapper when the Decepticons are assaulting a fortified Autobot position. He even has to share his body with six other Constructions in order to form the massive, dumb Devastator combination! Disgusting, merging minds like that! Long Haul’s hope is that one day Lord Megatron will recognize his true power and put him to a much more worthy task. 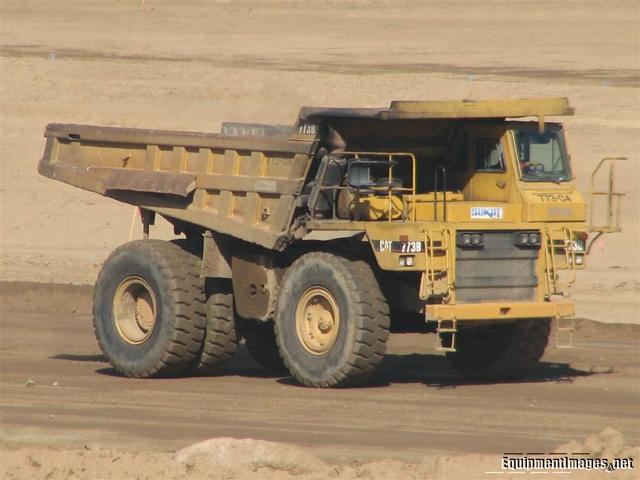 Long Haul’s vehicle mode is based on the real 2007 Caterpillar 773B off-road haul truck.

The truck bed is articulated, and can be raised to approximately 45-degrees. As a bonus, the eight pistons on Long Haul’s upper arms move when the bed rotates!

The main gimmick for all of the fully-transformable figures from the 2007 “Transformers” toy line was Automorph Technology™: as one part of the toy was being moved, another section would activate and move by itself via internal gears, springs, and levers. (Usually, it applied only going in one direction for transformation but not the other.) For the 2009 “Transformers- Revenge of the Fallen” toy line, the Automorph feature has been replaced with Mech Alive, which is not involved in transforming the toys. Rather it is a gimmick that functions only in robot mode to better imitate, in some fashion, the intricate movements and mechanics of the immensely more complex CGI character(s). Some figures are being reissued from the 2007 line since no significant changes were made to the character in that time-span, and will still include their original Automorph feature, but not the newer Mech Alive feature because they were manufactured two years previously. Since this is a brand new toy which was not released in 2007, the “Transformers- Revenge of the Fallen” Voyager-class Decepticon Long Haul has the Mech Alive feature, but not an Automorph Technology feature.

While the head was clearly designed to incorporate light-piping, it immediately became obvious to the manufacturer that with all that kibble on his back, it wouldn’t work, so a plain red part was used instead that is not transparent.

Each forearm has a spring-out axe, though on the box they’re referred to as “swords”.

Mech Alive is a special feature included in almost all transformable figures from “Transformers- Revenge of the Fallen”. In robot mode, specific parts of the figure’s body can be animated beyond simply posing it: panels shift, gears spin, and in some cases there is light-and sound tied in. These features bring out a new level of detail in an attempt to match up against the immensely complex designs of the computer-generated characters seen in the movie. The Voyager-class Decepticon Long Haul toy has three Mech Alive features:

Only the arm pistons specifically are listed as Mech Alive on the box.

Long Haul’s appearance in the film is an interesting one. After “Transformers” came out in 2007, a guy named Josh Nizzi created a fanart of a Bayformers’ interpretation of one of the classic Construction characters. This picture eventually found its way to director Michael Bay. As it turned out, Hasbro and TakaraTomy were advocating for a combining robot to be seen in the next film, and Nizzi’s convenient timing got him hired on to “…Revenge of the Fallen” as one of the concept artists! What he came up with for Long Haul remains relatively unchanged from how he appeared in the original fan art; only his vehicle mode (originally a Caterpillar 797 instead of the final smaller 773B) was changed in order to scale him better for his merge into Devastator.

The surface detail on this guy is pretty sweet. Working pistons? Awesome! However, the joints they use seem a bit inconsistent in robot mode. While they’re all nice and tight for a Voyager-class toy, the truth is that just about all of them should be ratcheting joints! How do I know this? Simple: his right hip clicks, but his left doesn’t. It makes me wonder if the QA folks missed a few checks. The other thing that bothers me is his bulk… or lack thereof. In the movie (and Nizzi’s fanart), he’s massive and bulky and pure muscle, baby. This toy, however, comes across as lanky and kind of monkey-ish. He’s got the torso right, but the arms and legs are too thin. I wish we could have gotten some missile launchers in his forearm sheaths (because that’s what he had in the movie), but the “swords” are appropriately detailed. (After seeing Prime rip them out on-screen twice though, it kind of kills the “wow” effect.) I also wouldn’t have minded some wrist twisting since, with the swords where they are, it looks awkward. Really, the sheaths do hamper posing quite a bit when they bump into his appropriately-placed kibble. About the only problem I have with the transformation is how to get his legs curled back up: things must line up just so or you have to reverse positioning his lower torso over and over, and with the way the kibble moves about, it’s really difficult to see where those damn pegs are supposed to go! The movable truck bed is nice. The movable truck bed with working pistons is awesome.

Not very well I'd imagine. There's quite a few gaps along the inside of the bed, and sand is not the sort of thing I think you'd want inside all those transformation components..

How did I know that someone would ask that?

BTW, light piping IS done with transparent plastic. It's just been painted over. Unscrew the head and take it out and you can clean off the red paint in order to "re=enable" it.

Maybe, but it still wouldn't get enough light to actually work. Thanks, I'm fine.

I complain pretty consistently about the Bayformer aesthetic. But this one, even though I would never get it, is kind of cool.

Bayformers have their drawbacks, certainly, but I find them refreshing. Nothing like it has ever really been attempted.