The Toysmen Series 001 Mazinger Z was easily my favorite toy of 2016 and was followed up in 2017 with the Jet Scrander accessory set. While that toy was also of high quality and a welcome addition to the Mazinger Z, it was hard not to look ahead to the next new character to be released in the line, Voltes V.

The box for Voltes is similar to the box for Mazinger Z. There is original art of the character on the front, that emphasizes some of the gimmicks you'll see when you get to the toy. Japanese text is written along the right side of the box and the bottom promotes the large size of the toy, which is 52cm, or roughly 20.5" tall. 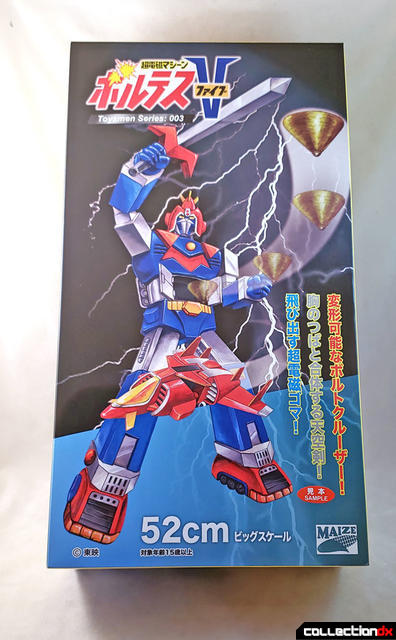 Although the front of the box is impressive, I actually like the back of the box even better. Here you have the toy depicted being assembled and/or armed in a giant hangar. 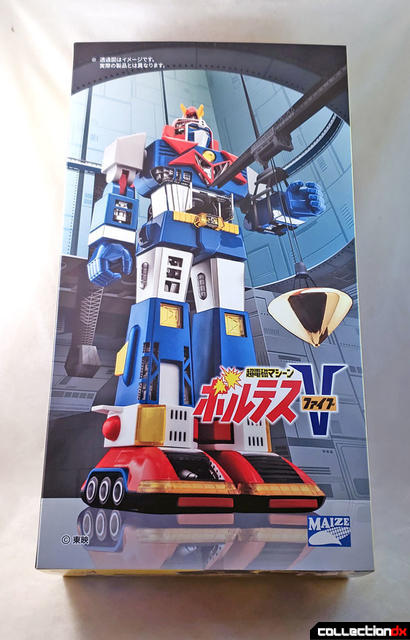 This really harkens back to the images of the character as it was shown on the booklet for the vintage DX toy (as well as other places). I find this particularly interesting because that image seems to show a Jumbo Machinder version of the toy. Jumbos and jumbo prototypes were often used on the packages of other toys in those days and these toys are essentially a marriage of vintage die-cast and jumbo aesthetics. 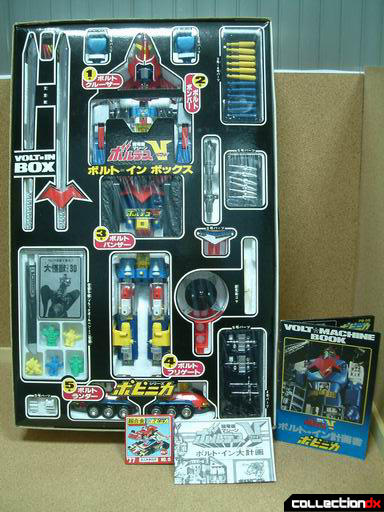 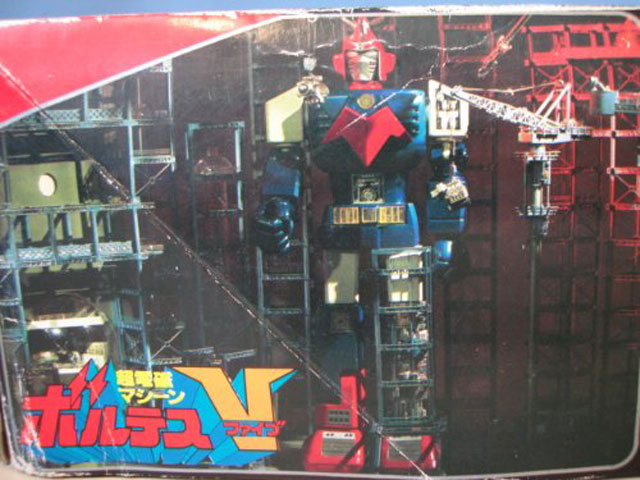 One side of the box shows characters from the show while the other shows the instructions for this specific toy.

When you remove the inner tray from the box, the first thing you see is a cover with an image of that hangar, minus the toy and the other tools. Much like the previous Mazinger Z, you can display your Voltes in front of this if you should so desire. 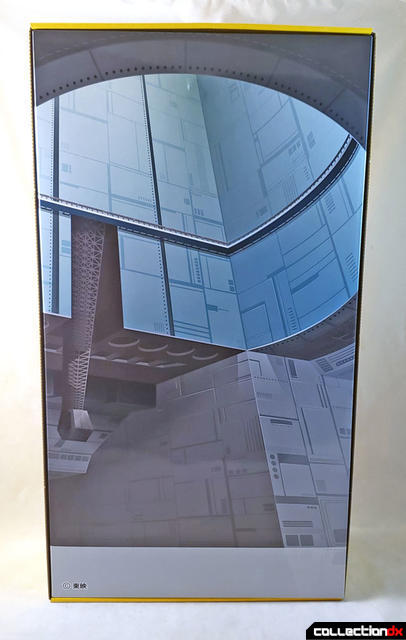 Remove the lid to get your first look at the actual toy. Once again, it is held in place by an intricately designed system of cardboard inserts. Although styrofoam trays may be the traditionally favored method of securing toys in place, Maize has really made an art of turning cardboard into a beautifully elegant looking, as well as safe, style of packaging. 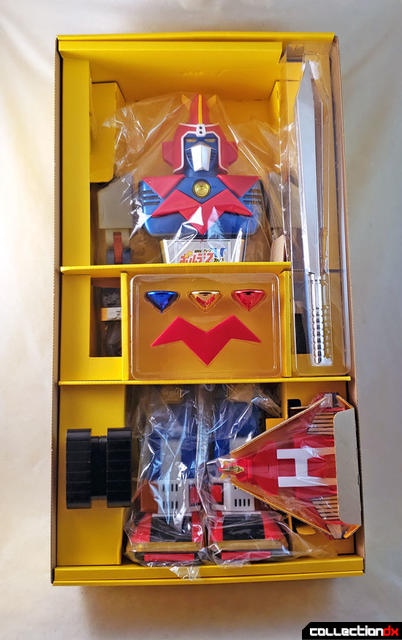 Each accessory has it's own place in the box. Even the parts that are held in place by a plastic tray have an appropriate space laid out for it in the cardboard. 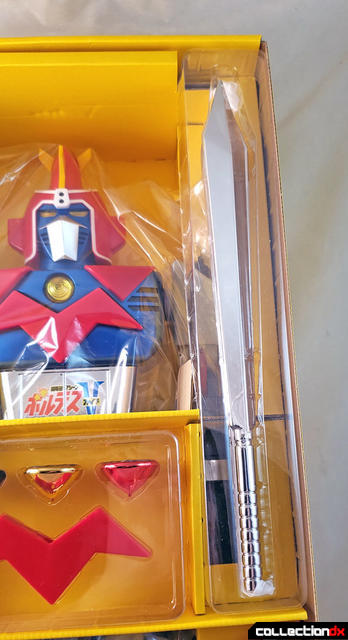 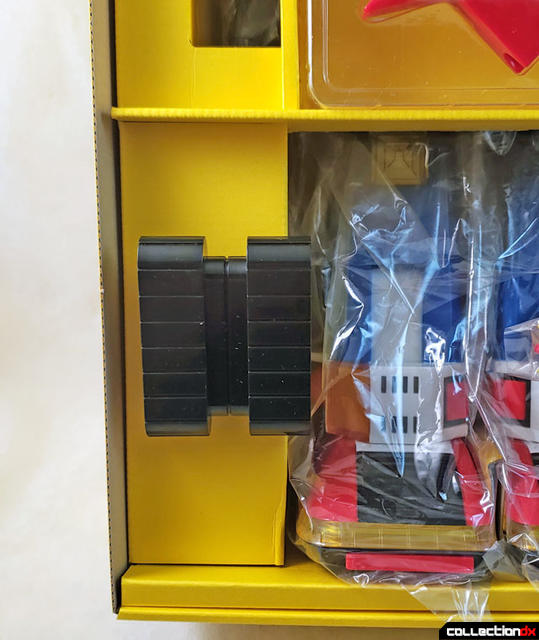 When you remove the toy from the box, you'll find a plastic bag with a sticker sheet underneath. But also be on the lookout for a small bag with some clear plastic pieces secured to the cardboard in the upper left corner. I almost didn't notice these at all when I first played with the toy. I'm going to show the toy first as I initially encountered it, before showing the stickers later.

As stated before, the toy is a significant piece standing 52cm tall, nearly full Jumbo Machinder size. However, the design is inspired by the classic Popy DX chogokin rather than the jumbo. The toy does not break down into it's component vehicles like the chogokin did, though. Rather than being an exact replica, the toy pays homage to both styles while being it's own thing. 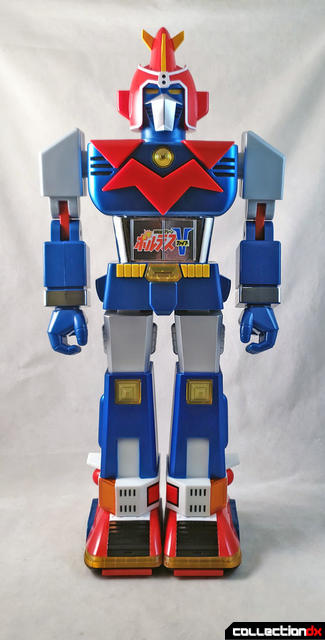 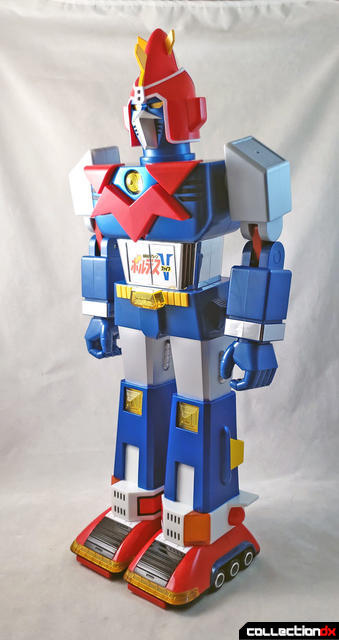 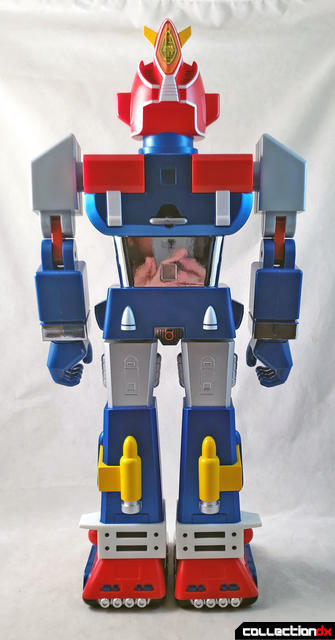 It's a beautiful sculpt with a variety of different aspects that will appeal to collectors.There's multiple materials used but somehow they all blend and look like one seamless piece. Although it's quite rigid, I think the head is soft vinyl, as well as the hands. 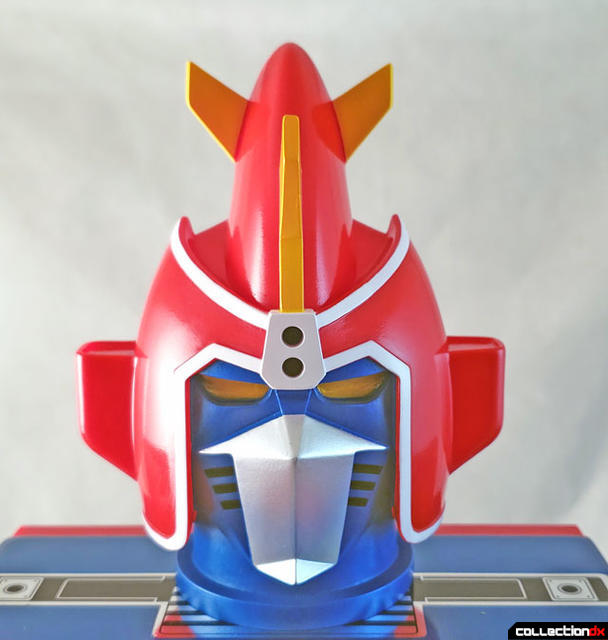 The torso is made of die-cast metal. 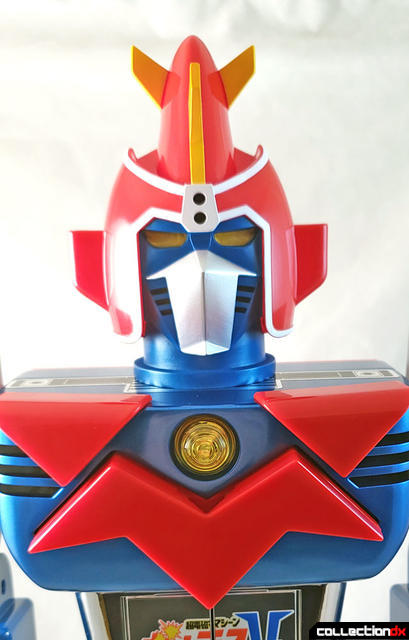 The chest piece is plastic and is removable. When in place, it's secured by a magnet.

Multiple clear and chrome areas are spread throughout the figure. 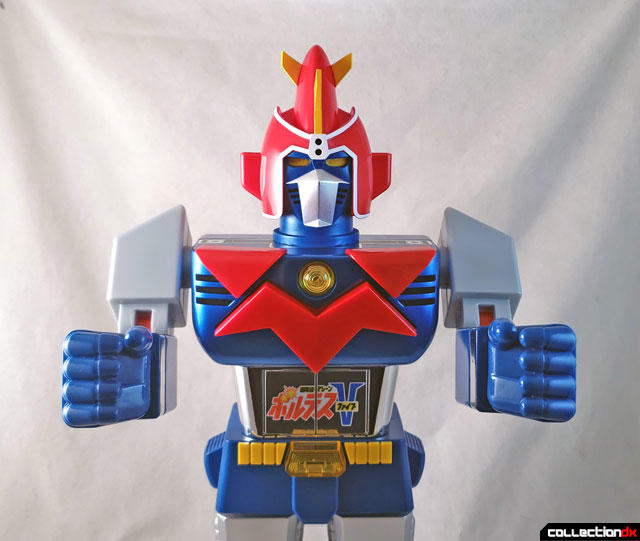 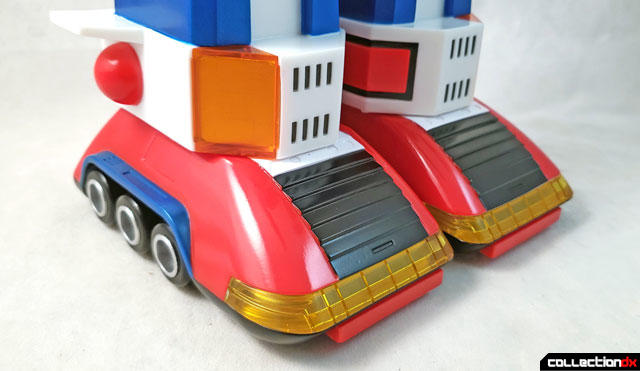 A separate tank tread accessory is included and can be attached to the back via a magnet. The whole piece is one solid hunk of plastic. 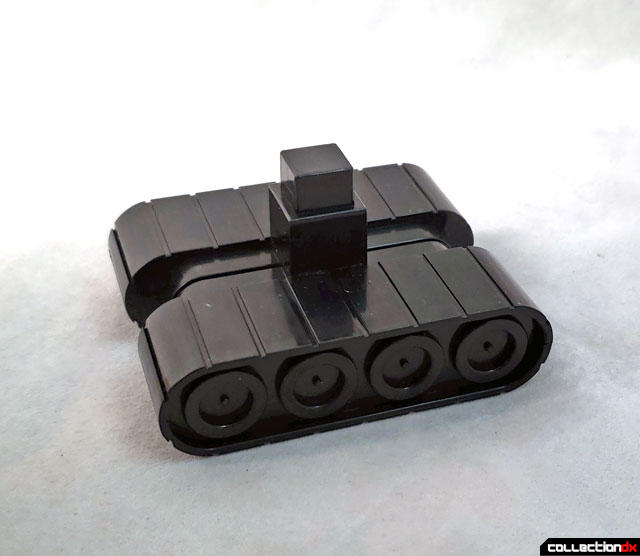 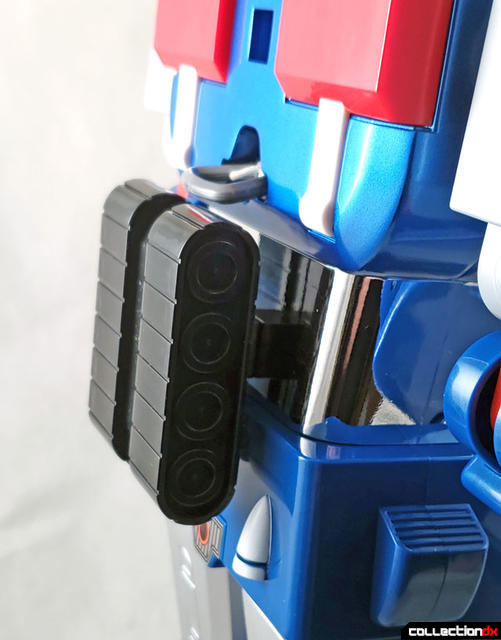 A separate Volt Crewzer piece is included, too. This can be used in vehicle mode, but can then be folded unto itself to be stored on the back with a magnet. 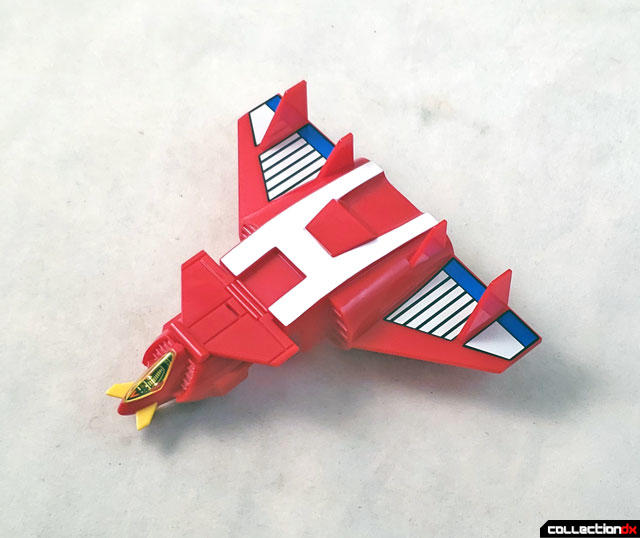 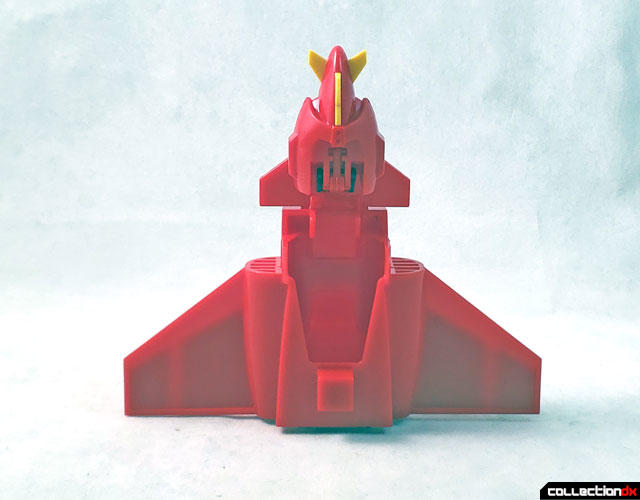 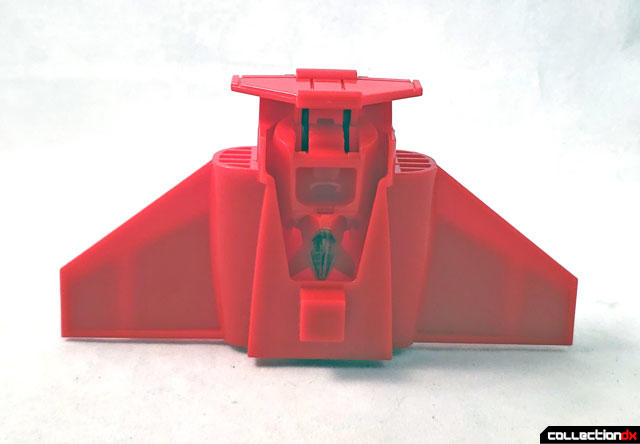 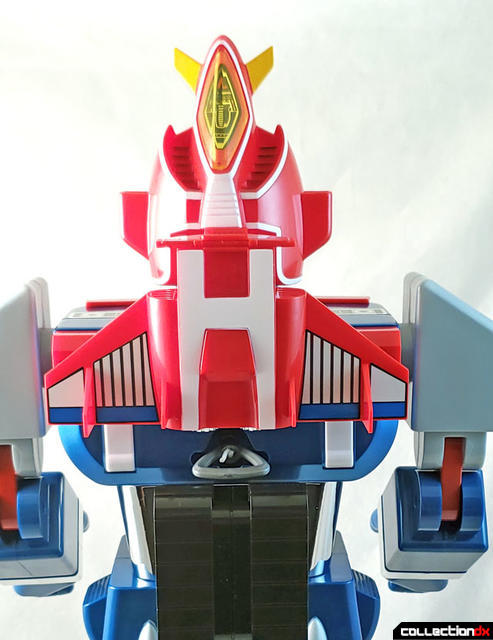 The magnet here could probably stand to be a little stronger. A couple of times the vehicle popped off on me while handling the toy, particularly while trying to turn the head. This is only a minor complaint for me, since I'll likely just be displaying the toy on a shelf.

As you have probably already guessed by now, the chest piece comes off and can be slid over the chrome sword to form that pieces hilt. 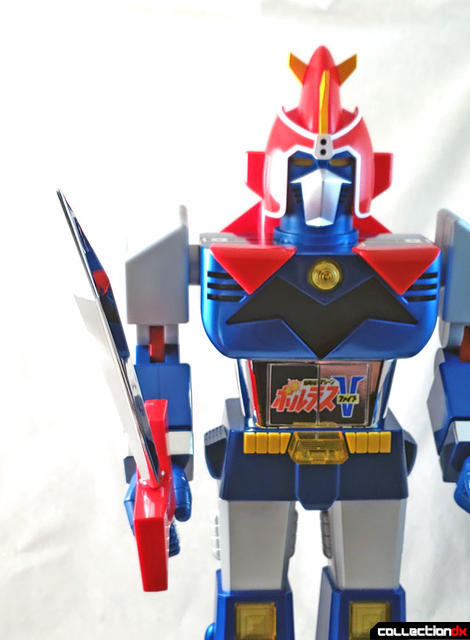 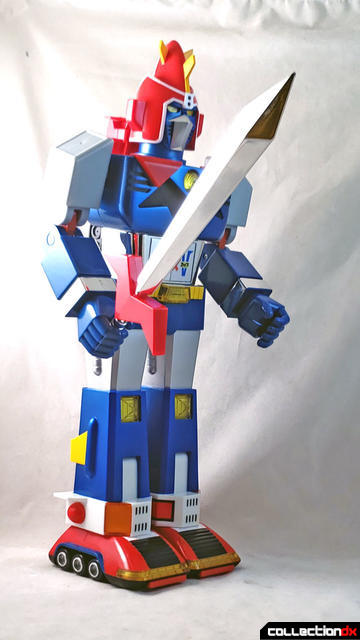 Two swords are included as well as an extra chest piece so that you can place a sword in each hand. 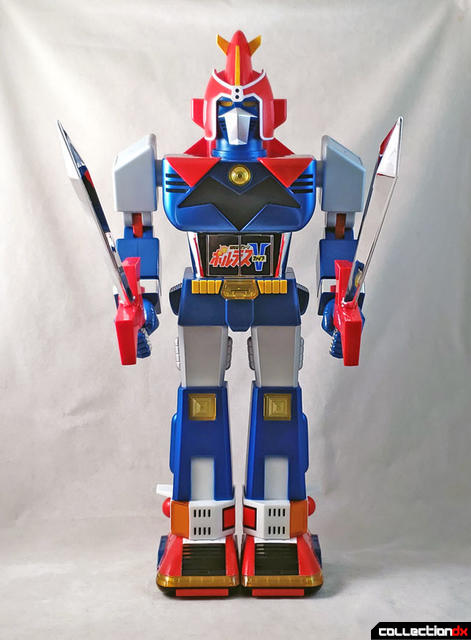 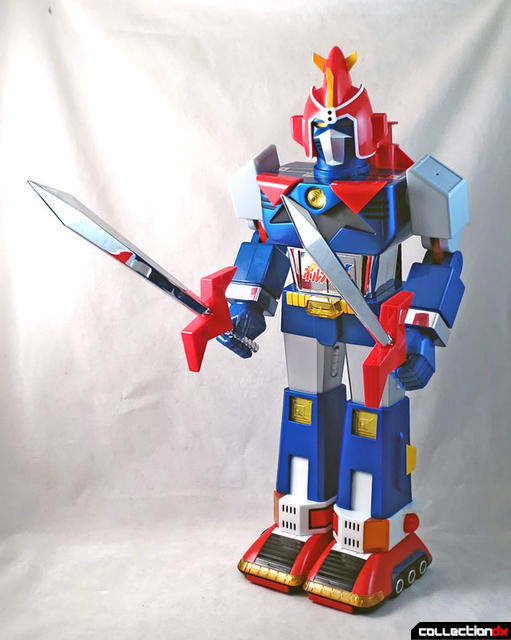 The main gimmick of the toy is the Ultramagnetic Tops feature. The waist opens up and you can place a top inside. Close the doors, pull out the yellow piece on the waist and pull the cord on the back and a spinning top will shoot out of the doors and land on the ledge and spin. The harder you pull the cord, the longer it will spin! 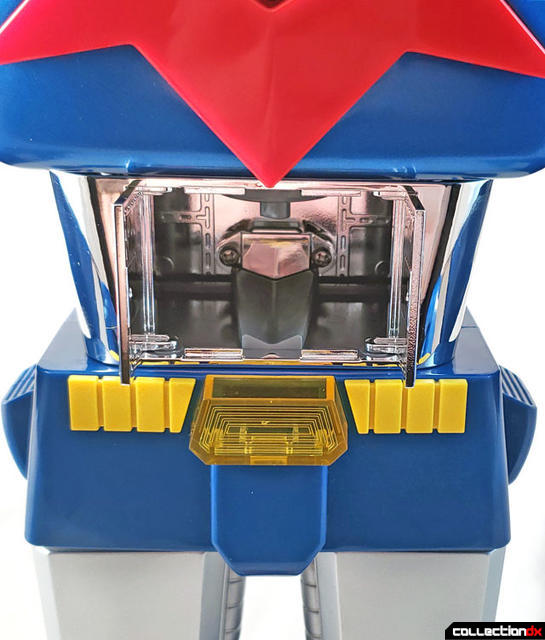 Check the video below where JoshB and I play with the toy and you'll see it in action!

It's a fun and unique gimmick that is incorporated nicely into the design of the toy. It's there if you want to use it, but it in no way detracts from the look of the robot if you only plan to display the it. When using this feature, I recommend that you make sure to lean the robot forward at the waist to ensure that the top actually leaves the waist and ends up on the platform. Also, make sure to hold it there so that when you pull the cord on the back, you don't accidentally straighten it up in the process.

Now remember that little bag that I mentioned is tucked away in the box? Well, inside that bag is two little clear yellow plastic pieces that can be inserted into the eyes. Even though the eyes look fine right out of the box, these pieces add an extra layer of detail. 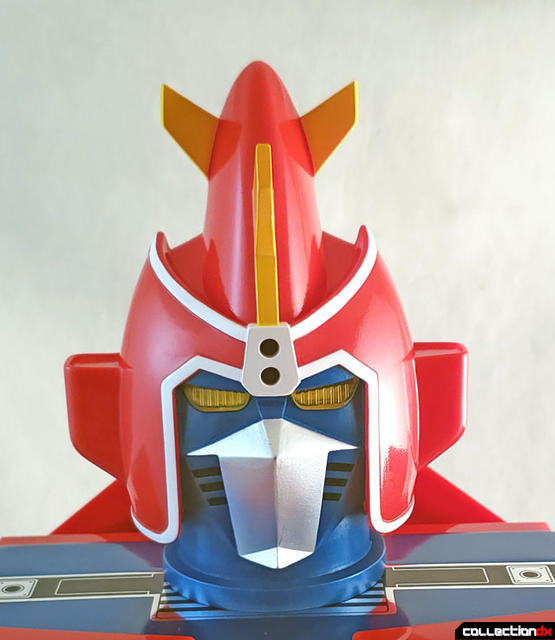 The sticker sheet is included to add detail to the toy that is intended to be an homage to the vintage toy. Stickers for each component vehicle can be applied in the appropriate places. 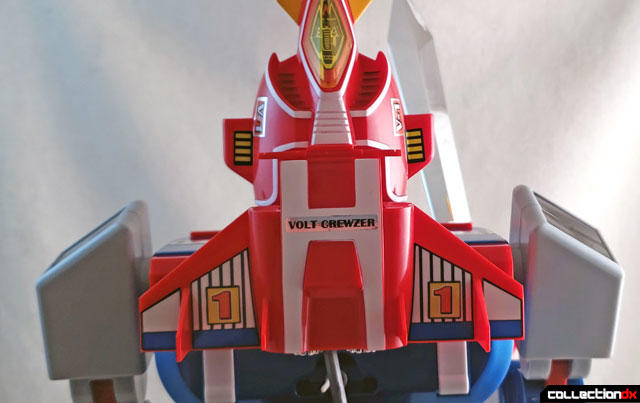 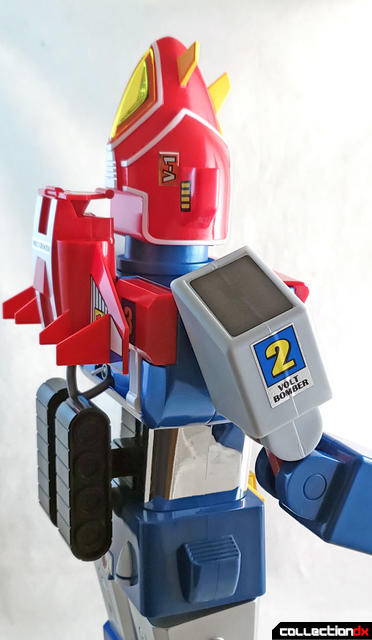 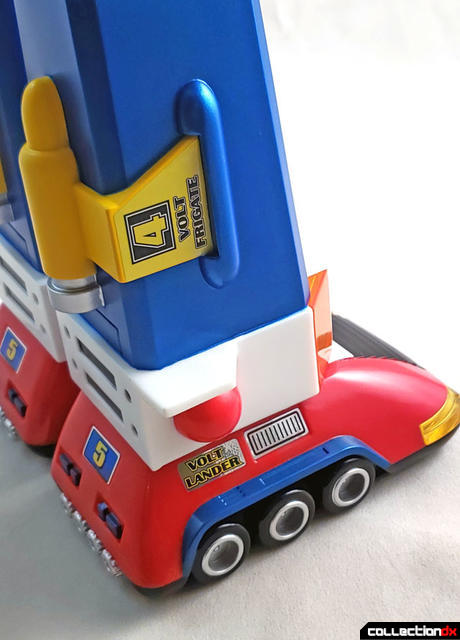 In summary, the Maize Voltes V is another absolutely spectacular success in the Toysmen Series. I can honestly say that there is no other toy line currently in production that has me anywhere near as excited as this one. (The next planned entry in the line is expected to be Daltanias.) If you're interested in buying a Voltes, please contact my friend Alan at one of the places below. Voltes V costs $530 plus shipping from Hong Kong.

I just ordered one from him. Looks amazing. God I want them to do Reideen so f’ing bad.

Got mine in from Alan today. What an unbelievably easy and fast transaction, and better packing than Mandarake if that’s possible, really good guy thanks for the recommendation!

Awesome! Glad you like it and thanks for letting us know it went well. Sometimes I worry that not having an official online shop link in the review might look strange so even though I know Alan is legit, I'm always happy to see others confirm it too. :)

My friend! I just received Voltes V from Alan. The packing was impeccable. The condition of the box museum-worthy. Discovering the features and details of the packaging and Voltes V himself is totally that same feels I had when 9yo me received DX Dynarobo from my grandparents in Japan.
Oh my goodness.
Oh my goodness.

I'm glad you got it and liked it!

The next release is expected to be Daltanious.