Back before Transformers Prime started airing on The Hub, we had no idea what the show was going to be, or what it was going to look like. It wasn't until San Diego Comicon that year that Hasbro showed off a 30 second clip of the show which featured Bumblebee punching the crap out of some nondescript Decepticons. Those Decepticons were the first Transformers we saw on screen at the time, and would later be known as the Vehicons.

The Vehicons are the cannon fodder of the Transformers Prime TV show, and accordingly do not have a whole lot of character since almost every single one that shows up on screen is doomed to blow up in about 30 seconds. So the only thing we really have to go off of the Vehicon is the mechanical design, and in that regard I think the Vehicon is pretty great. 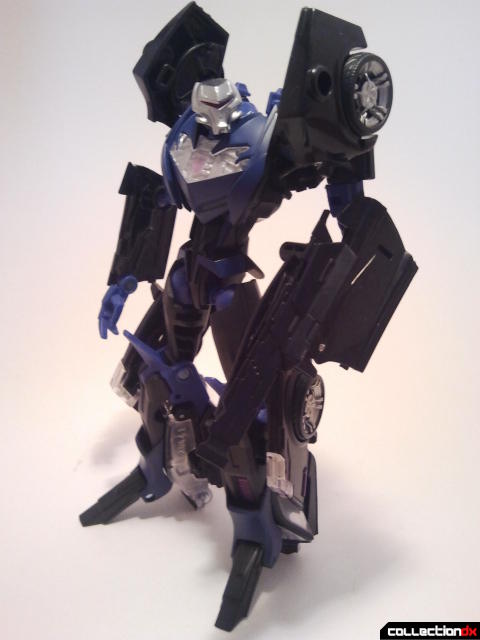 The Vehicon's vehicle mode is a super sleek car. A lot of similarities have been drawn with the Bat Mobile as well. I won't deny I can't see it, especially with the spoiler in the back. Although the plastic appears to be black at first glance, the plastic is actually a very deep purple. 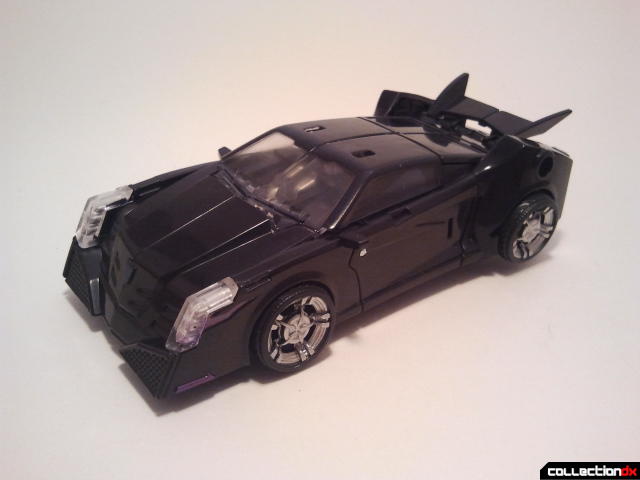 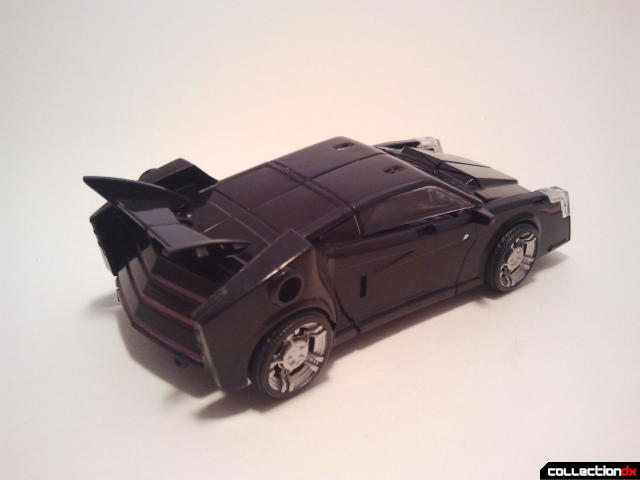 The Vehicon has a blaster which can be pegged into the rear sides of the car, or clipped onto the front. 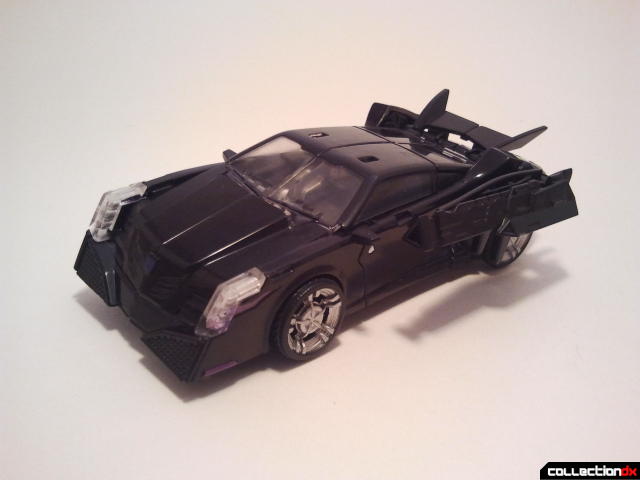 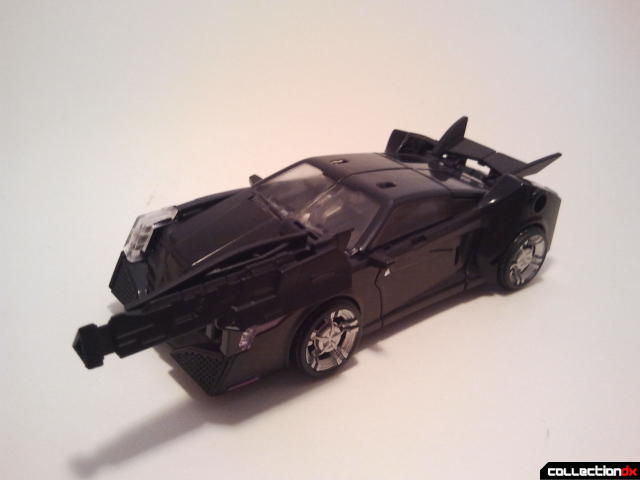 Plus as a nice throw back (Or at least in my head it is) to the old Spy Changers, you can pull the arm out while in vehicle mode and made him shoot his gun! 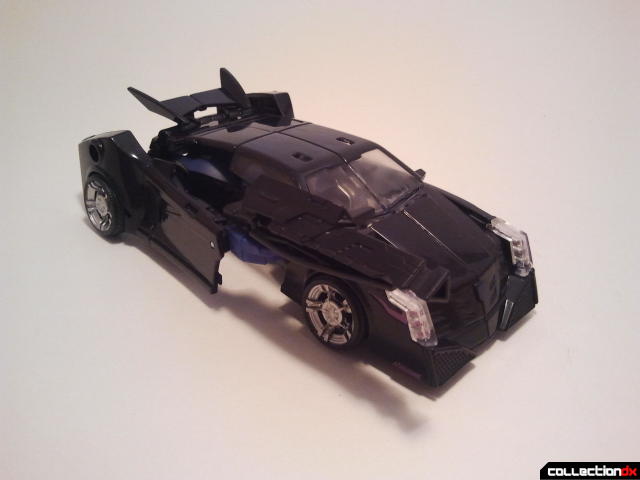 When pictures of the Vehicon first showed up, people were pretty perplexed by it. The robot mode has almost no signs of the car mode anywhere? It looked incredibly clean, to the point where some people began to wonder if the picture was photo shopped. Now that I have this toy in hand, I can tell you exactly how it transformers: Amazingly.

The entire top half of the car folds up into the Vehicon's lower legs! There is so much compression and plastic origami going on here, that it's no wonder people were unsure and confused by how this thing worked. The rest is pretty basic: pull out the arms and pop the head out. But the legs alone make this a toy that I have great difficulty ever putting down. 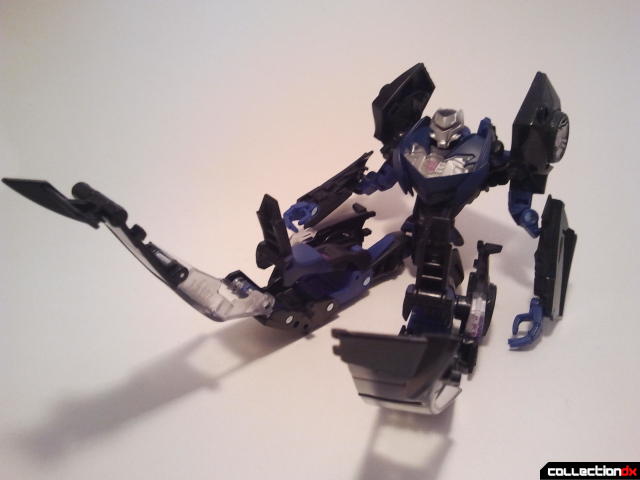 The Vehicon design can easily sum up the Prime design style pretty well: Tall, lanky, sleek, and smooth. It has fantastic shelf presence and just looks spot on to the show model. 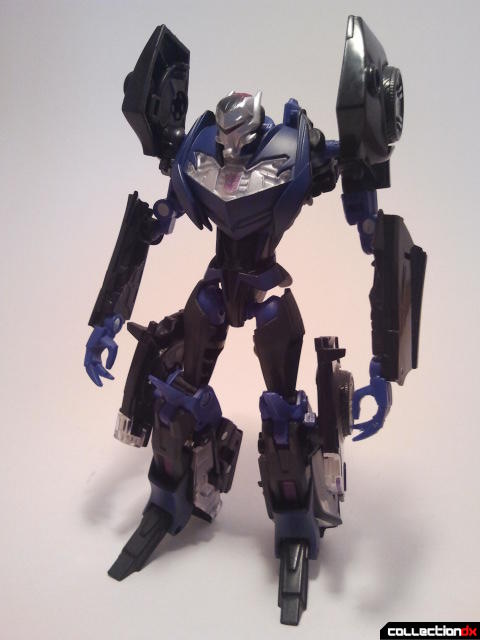 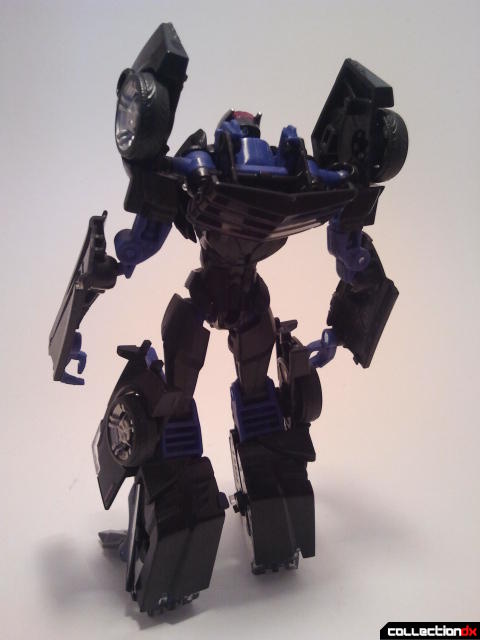 I particularly love the head design of the Vehicon. The visor-look reminds me of the Cyberjets, along with the cannon fodder Decepticons in War for Cybertron. 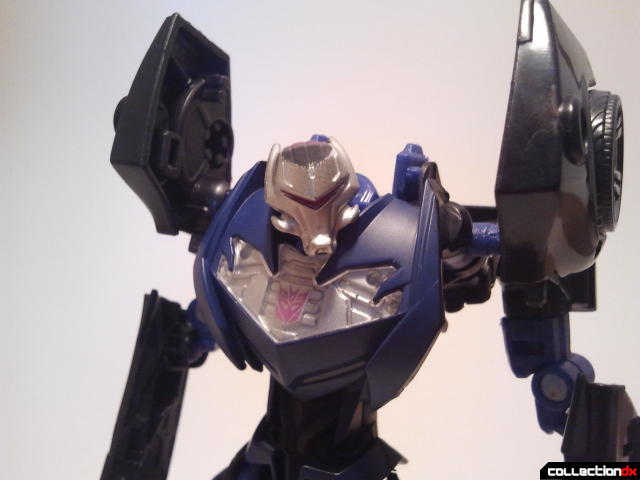 The articulation on the Vehicon is pretty standard: plenty of ball joints and swivels to make him do whatever you want. Unfortunately he does not have any ankles, and is also lacking a waist. 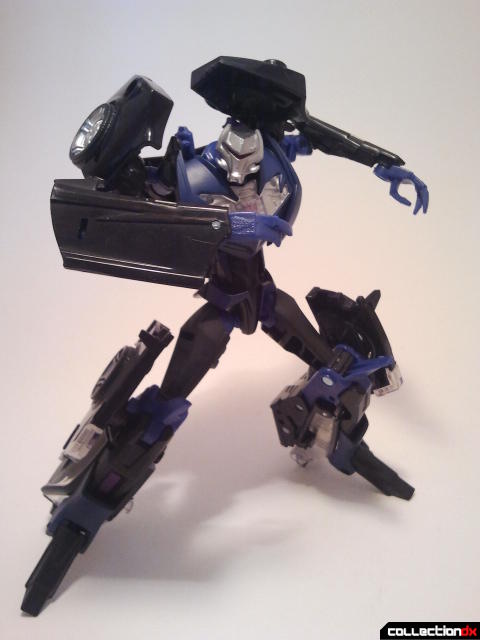 One point of contention with the Vehicon are his arms. Because of the way that the Vehicon's arms transform, his joints are kind of funny looking at the elbow. Despite this, there is still a bicep swivel and a ball jointed elbow, so it works fine and is easy enough to hide in many poses. 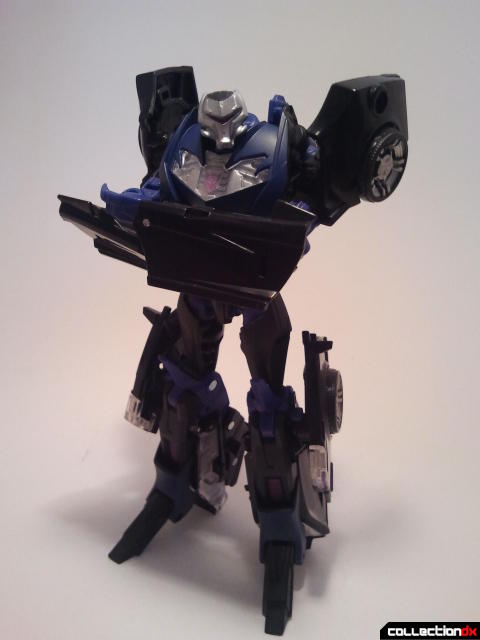 The Vehicon's only accessory is his gun, which he can hold in either hand. You can also plug it into the shoulders if you want, however the best display option for the gun is to fold up the hand and clip it directly onto the forearm to make it appear like the gun has actually transformed into place. 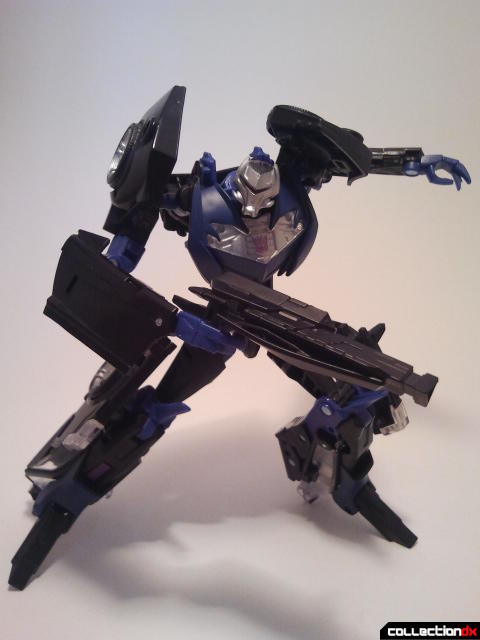 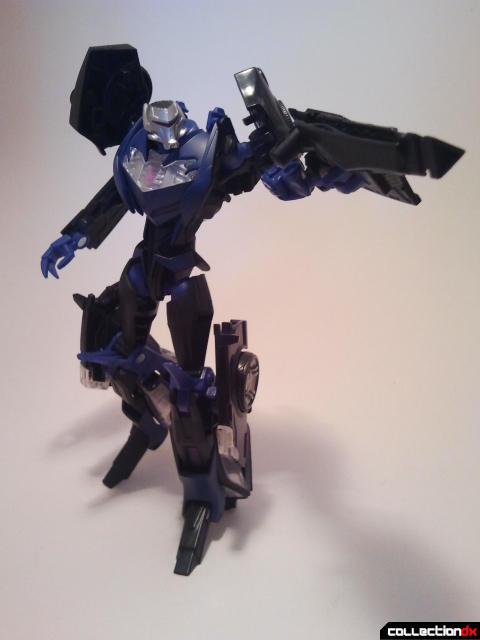 The Vehicon is a fantastic toy. It is pretty unfortunate that as of now he is one to a case for his current wave. That's very unfortunate for a character that's designed to be army built in mass quantities. With that in mind, if you see one at your local stores, absolutely pick him up on sight. He is one of the best toys to come out of the Transformers Prime line and will fit right in with the rest of your Decepticon lackies.

7 comments posted
This guy is sexy as balls.

This guy is sexy as balls.

Prime has some of the best/most accurate figures I have ever seen for Transformers. At least if you factor in the 1st Editions for many of the characters. It is insane how accurate this Vehicon is.

Great review, I'll definitely have to look into adding this guy to the collection if I find him.

Funny enough, the elbows are kinda accurate? While rewatching the first episode, I took a screencap of them dragging Cliffjumper with the fiery explosions in the background and noticed that the Vehicons do indeed have that crooked elbow thing going on. In any case, it's not as if the aesthetics are totally ruined by it. Anyways, yeah, Vehicons banzai!

Huh, how about that. I'll have to keep an eye out for that next time!

ON SIGHT. You got it! No questions there. I knew I wanted it, but I still hadn't seen many pics that showed it DOING things, so thank you! You finally tipped the scales; this looks fantastic.