Ultra Act is Bandai’s line of six-inch hyper-articulated Ultraman figures, in the same vein as lines like SH Figuarts.  Ultraman Tiga is an Ultra series I haven’t seen yet, so hit up Wikipedia if you’re looking for more info on the series.  I know it was the ‘triumphant return’ of Ultraman to television after a long hiatus, and was the first series to feature an Ultra hero with multiple combat modes, represented by multiple costumes.  It’s probably a cool show. 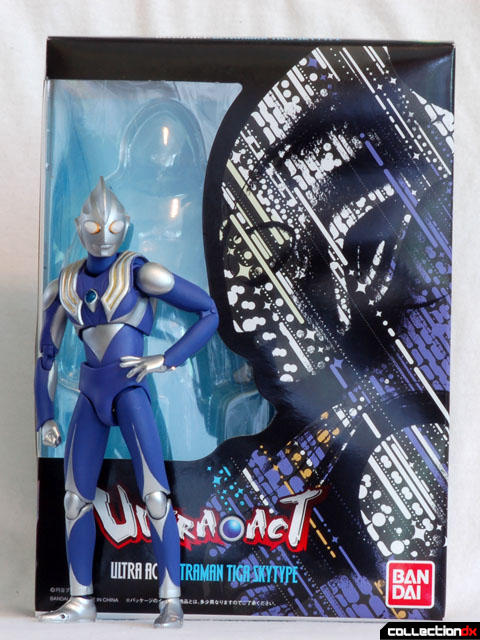 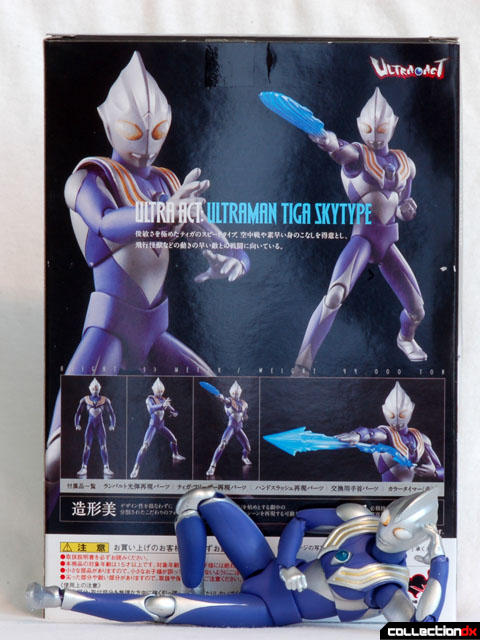 Ultraman Tiga Sky type is, I assume, Ultraman Tiga’s speedy, fast, and agile mode.  As Ultra suits go, it’s out of the ordinary by being purple instead of red.  The layout of the suit is pretty standard, but I can’t help wonder if it wouldn’t look a little better in sky blue rather than off-purple.  The figure is primarily sharply molded PVC, I think with some harder plastics in the joints.  The joints are nice and tight.  The box features some slick graphics and a pretty standard window.  Extra hands and accessories are securely held in a vac-tray. 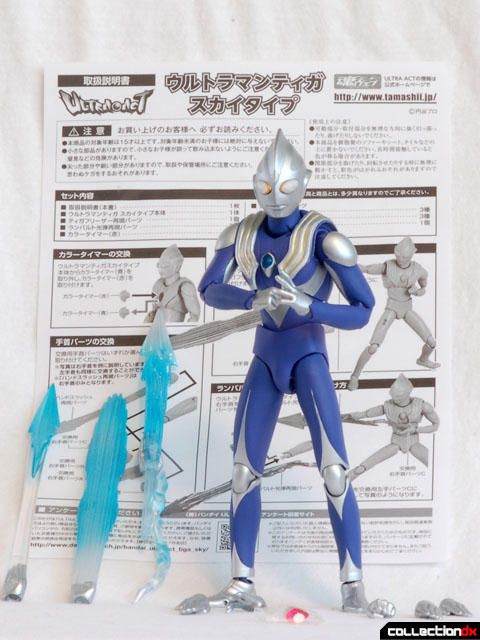 The contents of the box include Ultraman, four poses of hands, a swappable timer light for the chest, and three effects parts. 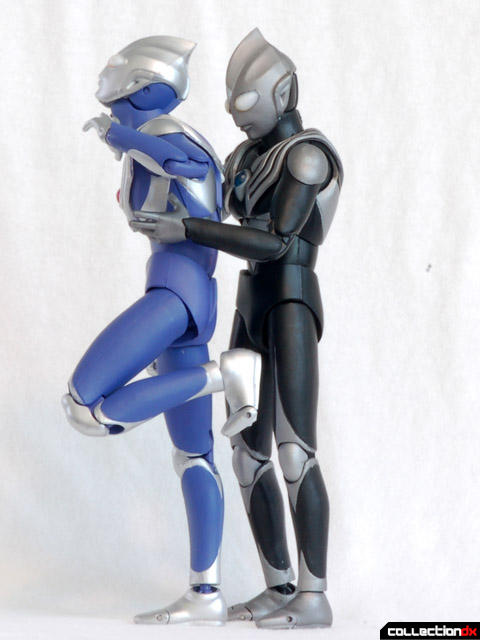 With the help of Dark Tiga, who I’ll be reviewing next, you can see that the articulation on this guy is nuts.  The range of movement is great, and the figure looks pretty clean doing it. 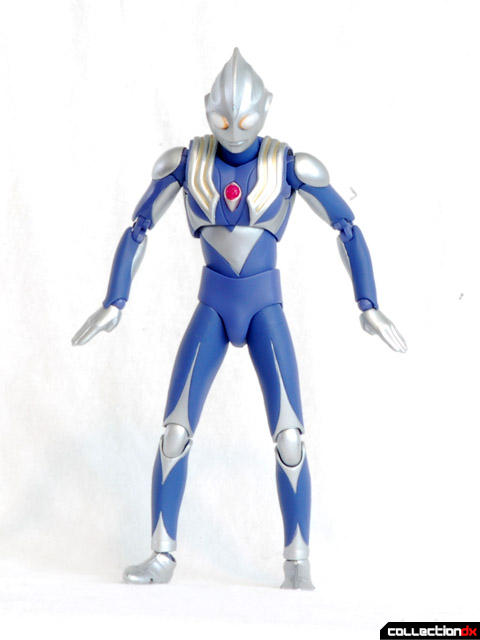 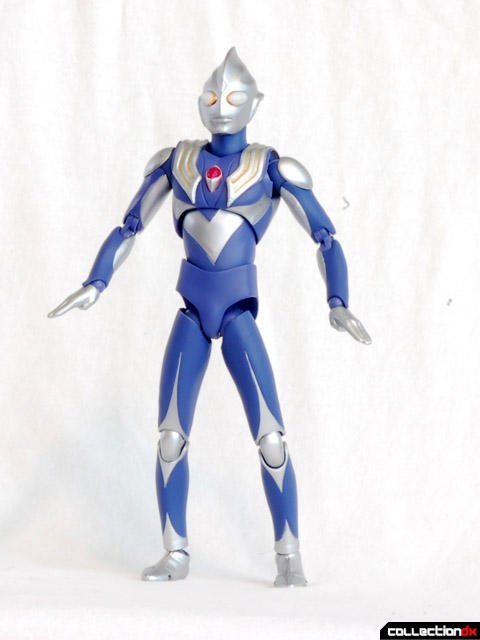 These two shots show off one area where Bandai’s superior action figure design really helps this figure look sharp.  The hips can extend for an increased range of movement, or sit closer to the body for the cleaner look.  Way cool. 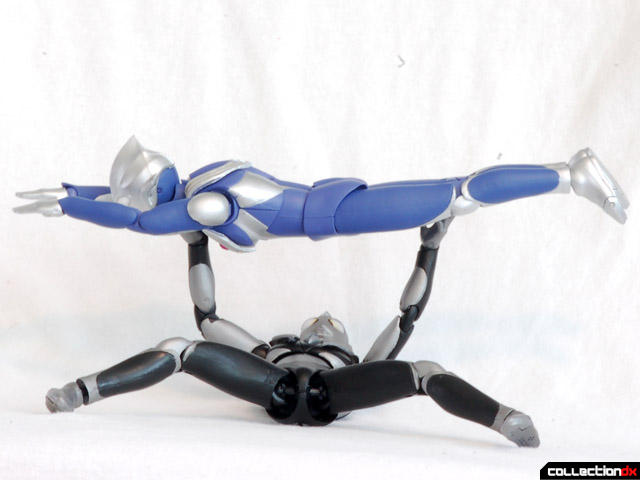 With Dark Tiga’s help again, we can see that Flight Type Tiga can achieve a really tight and classic Ultra flying pose.  Wheeeeee! 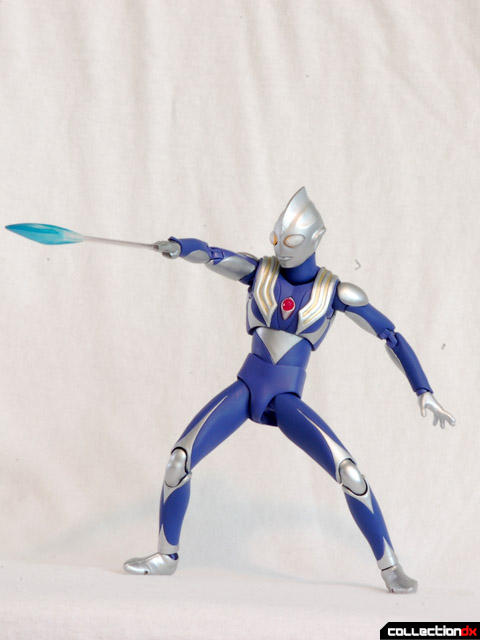 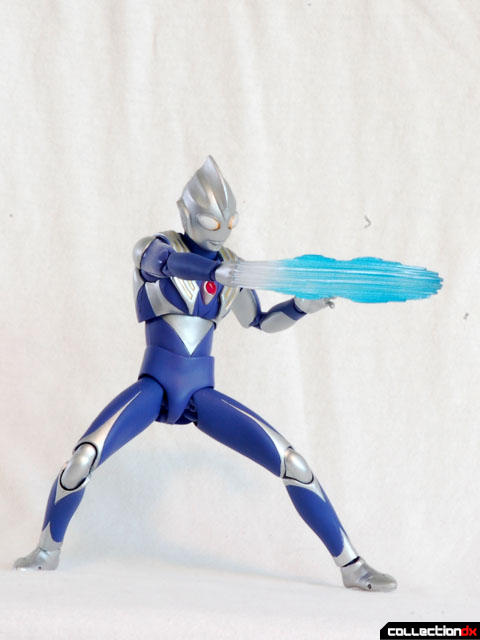 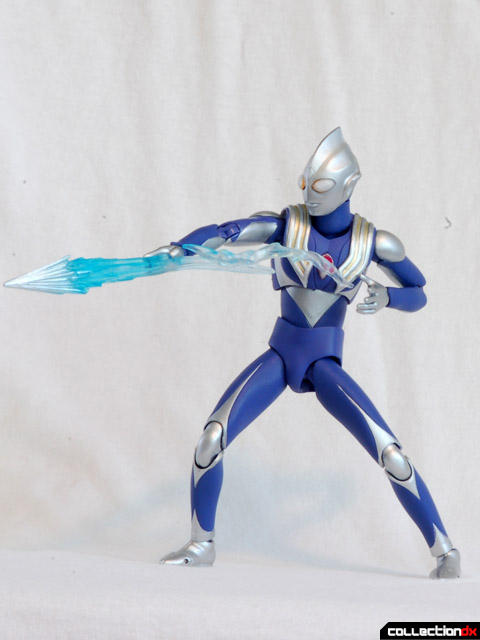 The effect parts are really cool, and look the part.  There are three blast effects, for three different attack that I’m sure have names in the show.  Two of them are pretty basic hand blasts, but the third is a bit more complex, and the directions show to pose it across his chest, like it’s a slightly more complex move.  Neat.  The effect parts are all harder clear PVC, and do not seem like they’ll ever sag, which is good. 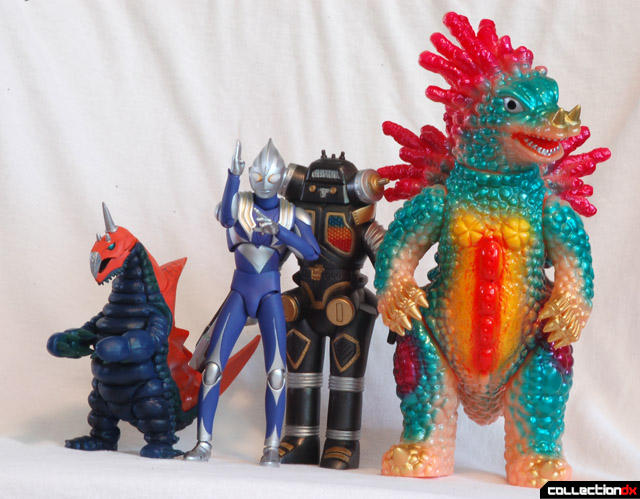 Tiga here can do a lot and look good, but the real question is: How does he stack up against some Ultra foes?  The lineup above gives you an idea.  Since Tiga is six inches tall, he’s perfect for fighting the Bandai Ultra Kaiju figs, which makes sense.  He’s a bit too big to face off against the blue and orange Ultra kaiju trading figure I have.  He’s small next to the M1GO Vekakron I have, but that’s not so bad because it just makes the kaiju look like a bigger threat. 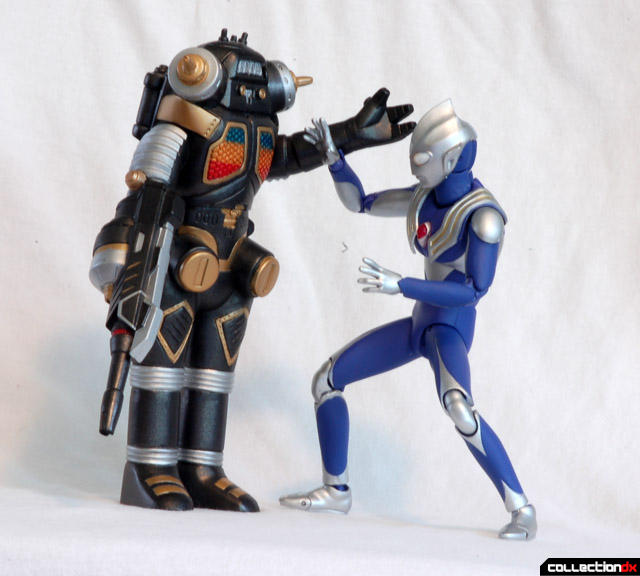 Tiga squares off against King Joe Black.  I don’t really know how Tiga fights in the show, but the original Ultraman was always a bit of a grappler, so that’s how my Ultras roll. 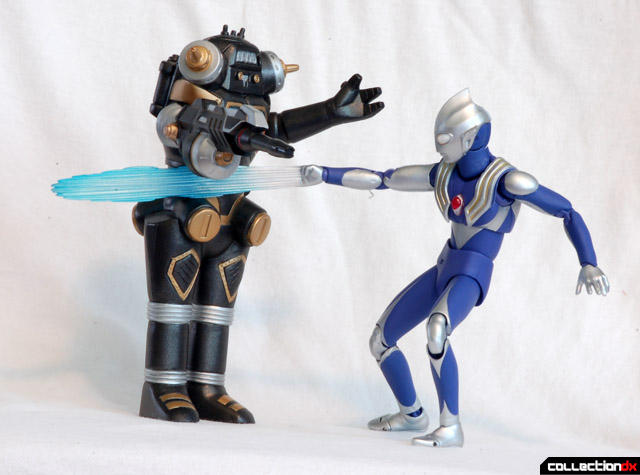 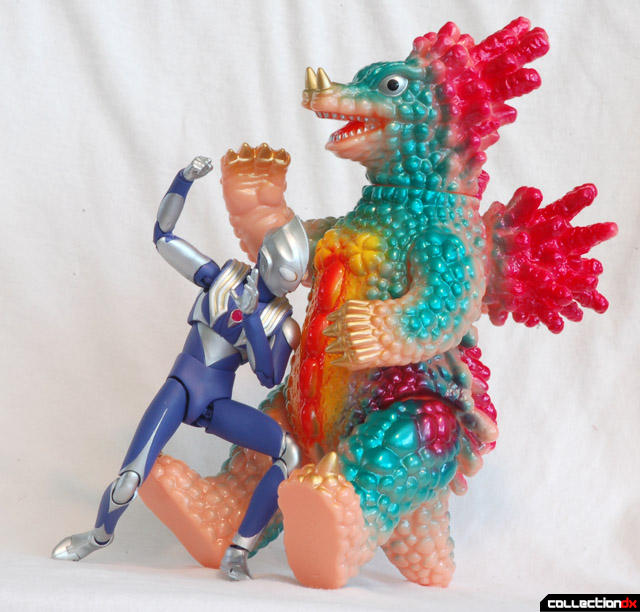 Vekekron tries to sneak up behind Tiga to no avail! Using his enhanced speed, Tiga nails Vekekron with a low shoulder check. 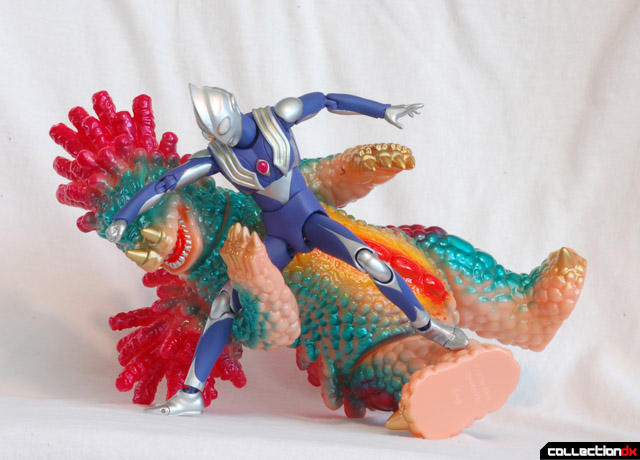 Once Tiga has the initiative, the results are pretty much sealed.  The best part of Ultraman shows is always when they get down and dirty.

This is my first experience with an Ultraman action figure, rather than a vinyl, and I think these are some really neat figures.  Having a really slick Ultraman that can recreate the moves from the show against the typically doofy kaiju in sofubi is a blast.

Review sample provided by Tamashii Nations. You can get yours at BigBadToyStore.

Wow, this thing is super articulated. You did a great job of showing it too - awesome poses. I have to ask though - is Dark Tiga... tickling Sky Tiga?

Thanks, Josh! I really wanted to show off how much fun I had with these guys over the weekend. I guess it does sorta look like Dark Tiga is tickling Sky Tiga... or copping a feel!

Awesome! I gotta get this guy! I've had one Ultraman figure ever, and apparently it's this guy. Dunno what toyline he was a part of, but it looked just like this guy, but he was using some wobbly, well-articulated 6-inch body that was covered by a non-removeable spandex suit (head, hands, and feet were attached by ball joints). Not long ago the poor thing's head broke right off, and it saddened me, so I think this'll be a perfect replacement!

Awesome review! Looks like you had tons of fun with it. I love my Ultra Acts more than I ever thought I would. Dark Tiga looks really really cool, much better than Sky Tiga in my opinion. Cant wait for that review

Thanks, Chachi, I had an awesome time with these. I think you are going to enjoy the Dark Tiga pics quite a bit... I think I'd really like to expand my collection with Zoffy and Seven. Those are two of the 'get things done' Ultras that I really dig.

Didnt even realise Tiga was out. I must get all the forms!