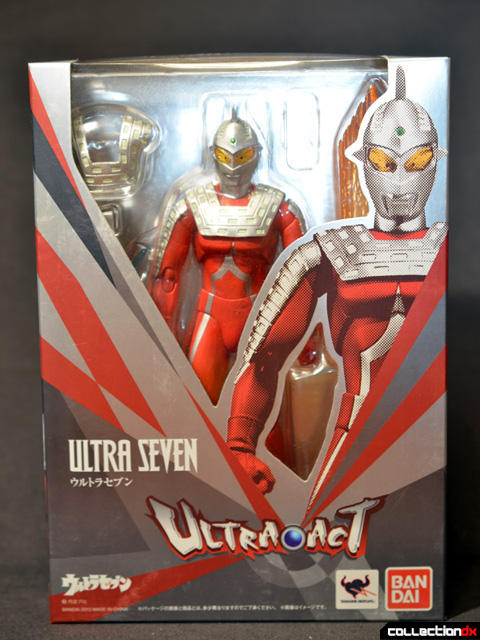 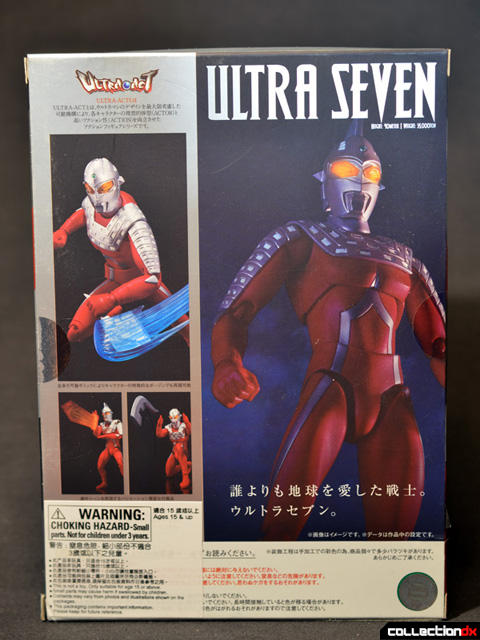 Bandai’s Ultra-Act line has been going on for years now and continues to deliver excellent renditions of characters from the long-running Ultraman franchise.  Ultra Seven is one of the latest releases, but is not the first version of Ultra Seven to be released as an Ultra-Act.  I don’t really know what makes the current release different from previous versions other than the attack effect parts included. 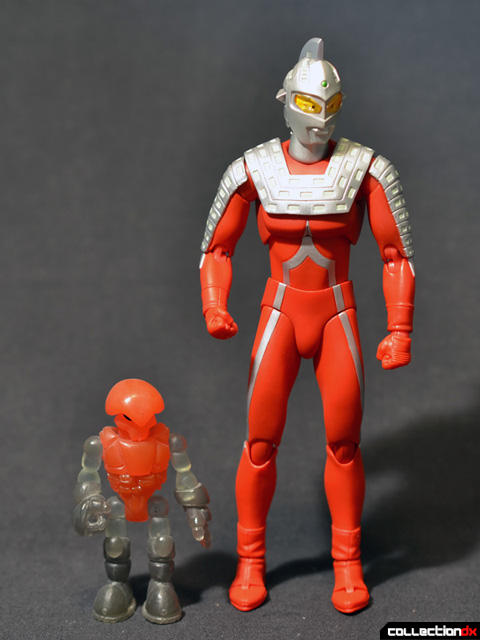 Ultra Seven stands six inches tall, shown here next to a Glyos Wraith Pheyden for scale.  He’s made of hard PVC with more durable plastics for the joints. 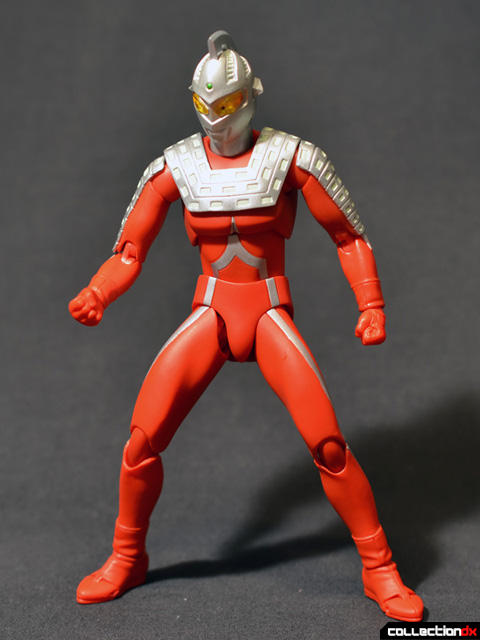 Everything feels solid and tight, the build and paint finish are both impeccable.  The shoulder armor is layered over the shoulder part so as not to hinder articulation much, and it works great.  The shoulder armor is a key aspect of Seven’s tougher appearance than his Ultra-predecessor, so I’m glad Bandai used their engineering chops to get this area just right. 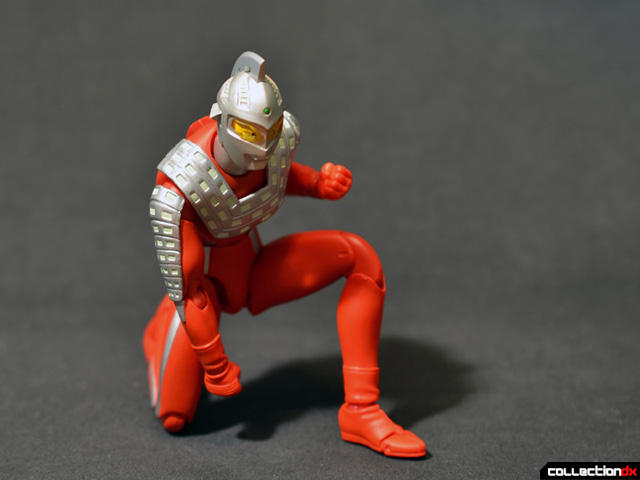 Ultra-Acts are designed to be the most articulated versions of Ultraman characters, and Seven is no slough.  The hips can pull down for extra range of motion, allowing for some deep crouches. 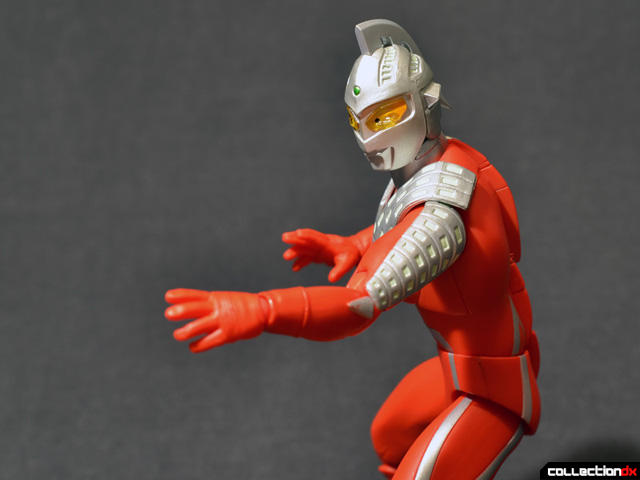 Ultra Seven comes with a number of alternate hands to allow him plenty of fighting options and to depict his special attacks.  I always like the spayed hands UA’s come with.  Ultramen always have great fighting stances when facing down their enemies, and these hands make them look at the ready.  The wrists on Seven feel really solid after swapping the hands a whole bunch for this review, and the fit of the hands is great. 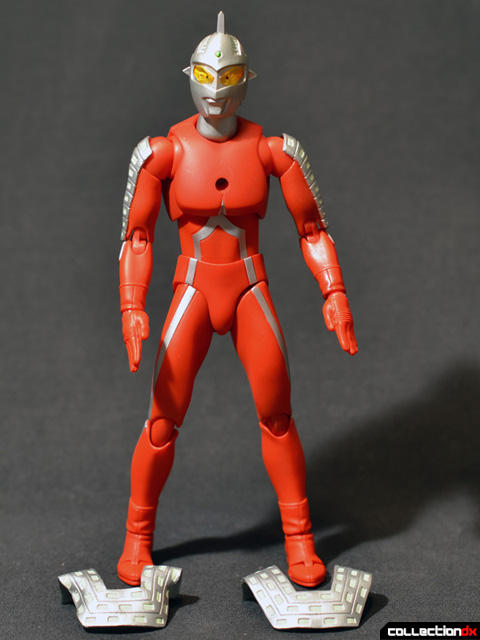 In addition to hands and attack parts, two chest armor parts are included.  One is in a neutral shape, and the other is bunched up around the shoulders to allow for increased arm motion while looking how the actual suit would move.  The chest armors peg on in the front and back, and are nice and secure when in place. 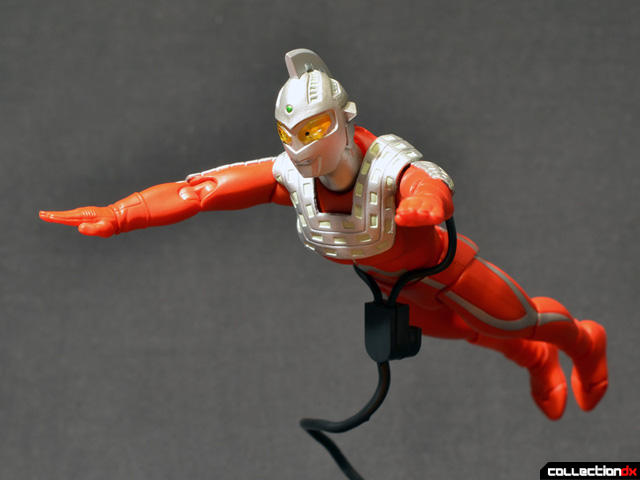 With the optional chest part and the flat hands, Ultra Seven can fly into action!  Actually, he usually flew off like this after dispatching his weekly enemy. 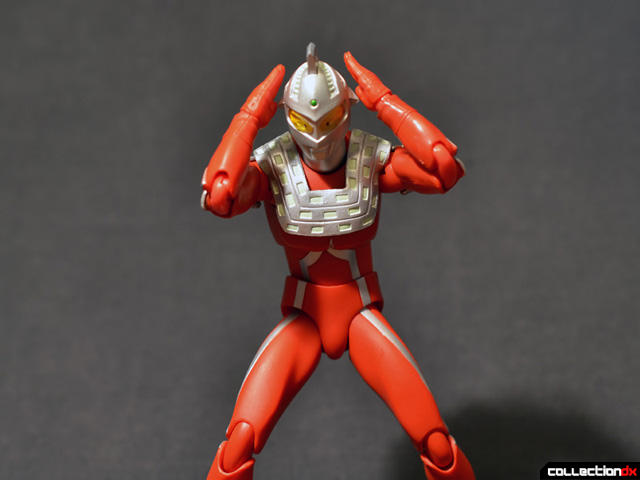 The flat hands are also used when Seven deploys his Eye Slugger, the removable blade on his helmet.  The Slugger comes off of his helmet, but a second one is also included with a shinier finish for use in his attacks. 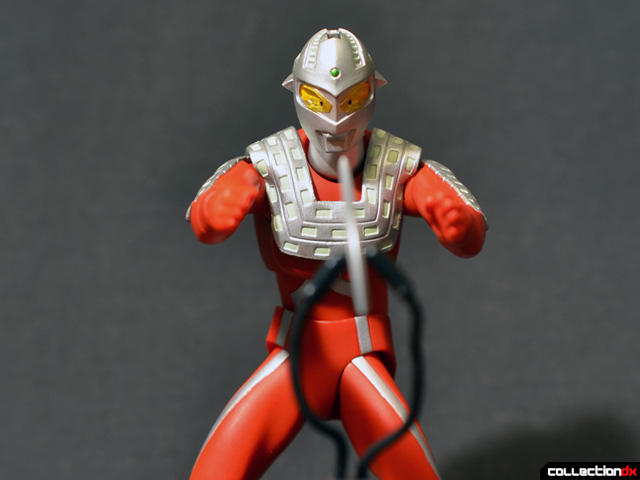 Ultra Seven typically threw his Eye Slugger at foes, often to grisly effect.  In one of his first battles of the series, against Eleking, Seven straight up decapitates the kaiju with his Slugger.  Ultra Seven does not mess around. 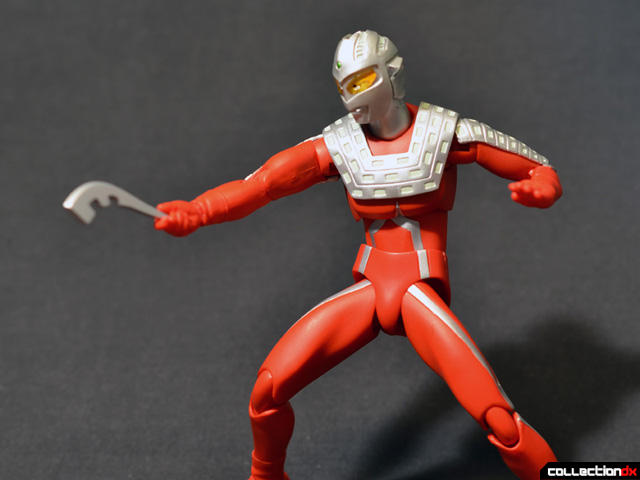 Gripping hands are also included so Seven can wield his Eye Slugger as a hand weapon.  Ultra Seven is one of the more badass Ultras, and his arsenal reflects this. 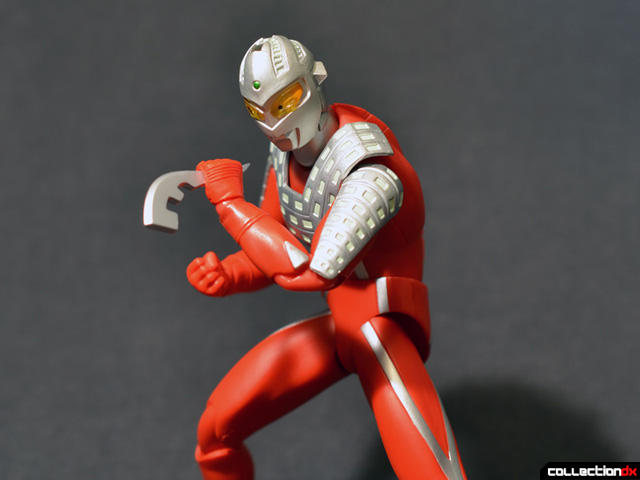 There are two styles of Slugger gripping hands for different fighting poses! 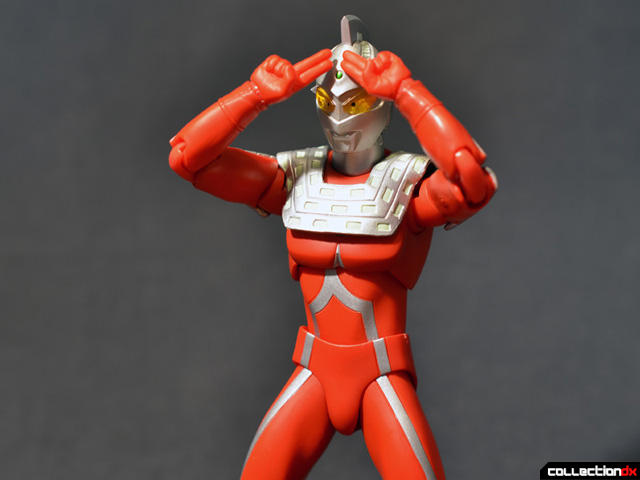 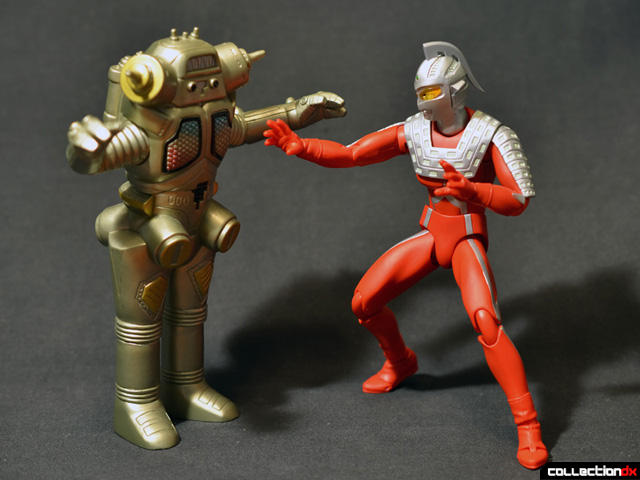 The real thrill of collecting Ultra-Act figures is that they are mostly to scale with Bandai’s long-running Ultra Monster, or Ultra Kaiju, vinyl line.  Keep in mind that the normal Ultra Monster releases are around six inches and work with Ultra-Acts, not the newer Ultra 500 line, which are smaller vinyl figures.  The Ultra Monster line has been running since 1983, so there are basically infinity Ultra kaiju toys out there to pit against your Ultra-Acts.  To that end, no review of Ultra Seven, one of the most iconic Ultramen, would be complete without some pics of him fighting one of the most iconic Ultra kaiju, King Joe, who first appeared in Ultra Seven. 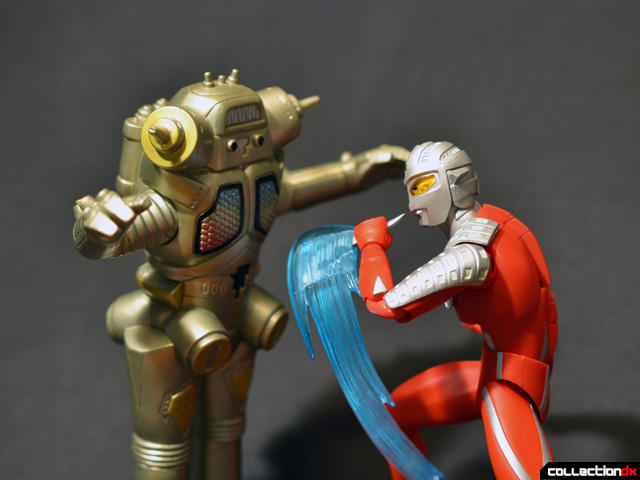 A blue swipe effect part is included to make the Eye Slugger more dramatic.  This part is actually two pieces that snap together around the Slugger part, and looks great. 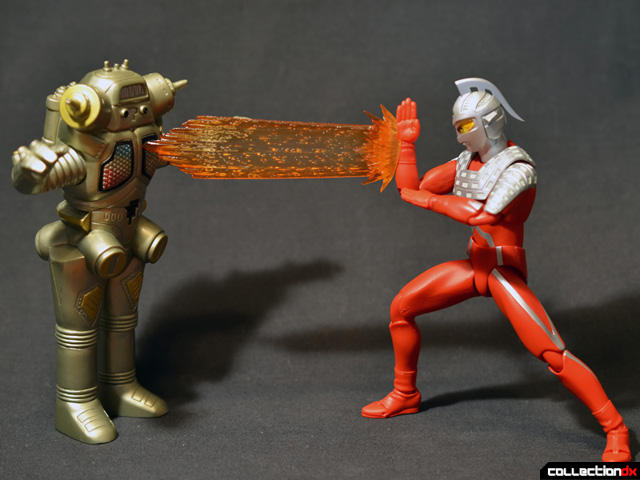 Also included is a Wide Shot part, with a molded on hand.  Seven killed a lot of seijin foes with his Emerium Beam, but the Wide Shot was one of the big guns he could whip out when needed.  The Wide Shot drained most of Seven’s energy, but had the desired impact on his enemies. 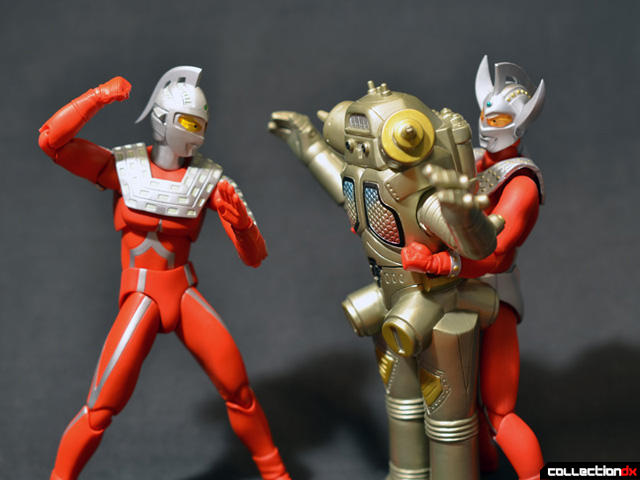 Fighting alien robots is better with friends.  Ultraman Taro took a lot of design cues from Seven, so it’s only right that they share in this moment of beating King Joe to a pulp. 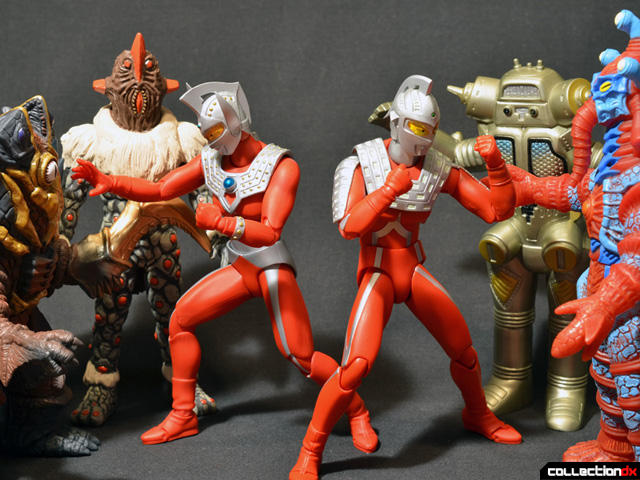 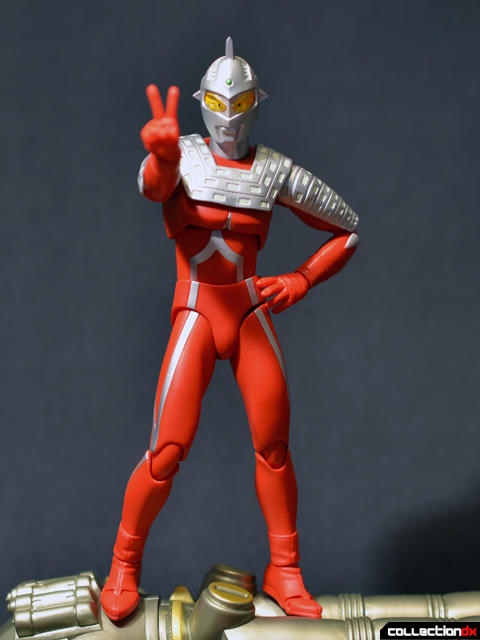 Ultra Seven stands victorious, showing off the last of his optional hands!

As a child in the 90's I remember that TBS used to show Ultra 7 reruns at like 4 or 5am. I also remember the show "Cartoon Planet" used clips from the show in it's "Messages From Outer Space" segments. All of this was back when TBS had "Monstervision." Ah, how I miss those days...

Cartoon Planet? You mean the one with Space Ghost?