"MP-01B: Convoy Black Version: Released in 2009 as an e-Hobby exclusive redeco of the MP-01 figure in black, retaining all the accessories of the original release, although with a revised collector's card. While the color scheme is frequently used for evil counterparts of Optimus Prime, this version is still depicted as an Autobot. Rather than being a version of Optimus Prime himself, the comic included with the figure indicates that he an "Eldedroid"; a mass-produced drone unit made in the image of Optimus Prime in order to strike fear into the Decepticons, and equipped with the same black armor upgrade as his T.H.S.-02B form. The comic also reveals that there are 21 of the drones, and that most of them are controlled by the sleeper agent, Flip Sides." 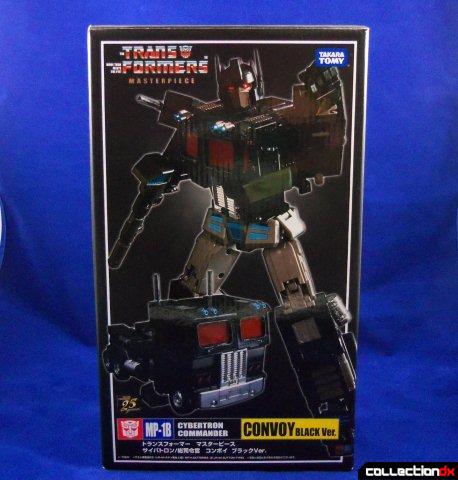 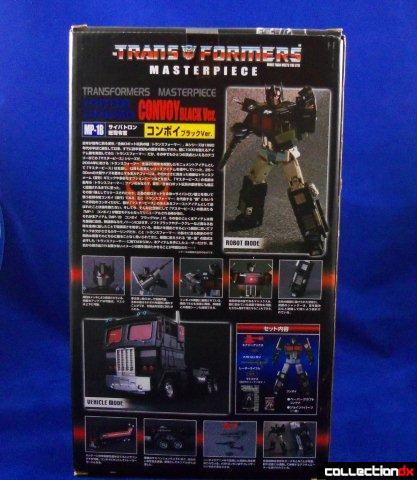 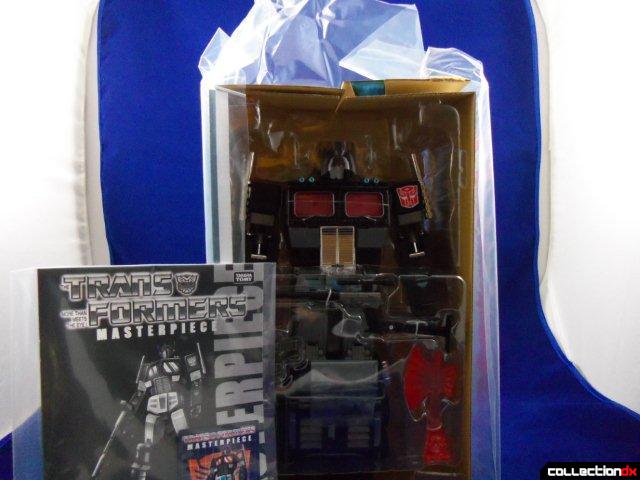 As with the other billion MP-01 Convoy releases he is 12 inches tall, has a ton of die-cast (all the other Masterpiece releases are the antithesis of this BTW), rubber tires, cool Matrix that lights up, Energon axe, and Megatron gun. 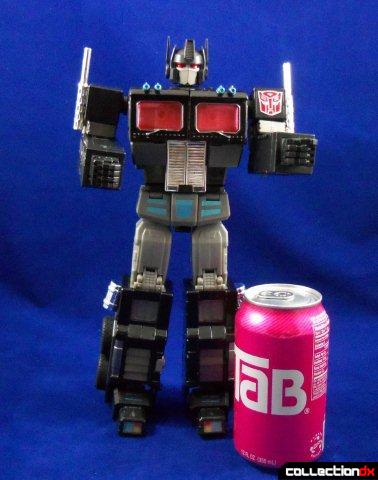 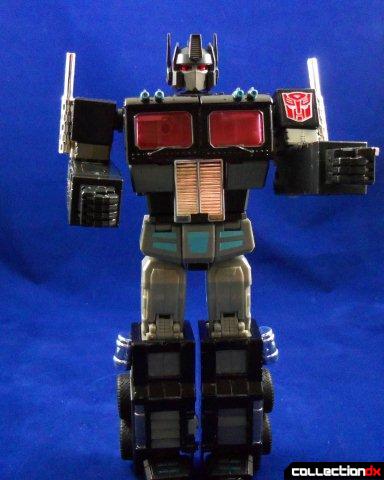 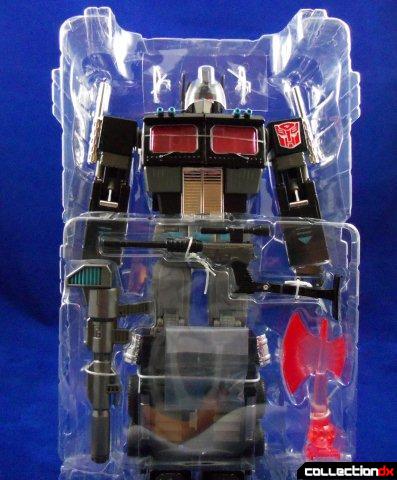 Reverse-Prime or the name steep in sorrow and woe...Ultimus Prime has Optimus and Rodimus on his communicator to mock them as he continues his unabated evil doings... 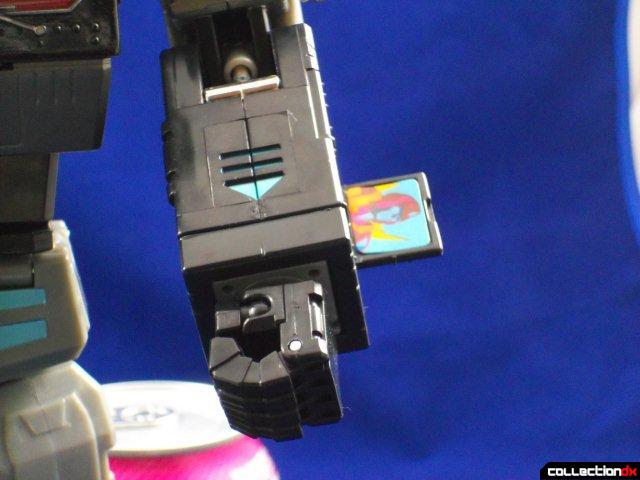 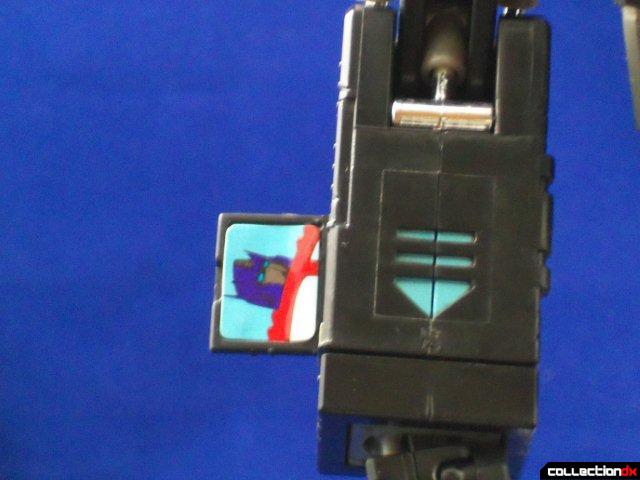 Do not confuse him with the seemingly slain Optimus Prime in his "sleep mode" of black and greys... he relishes his red evilness... stare in his Decepticon purple Matrix of Evil and be blinded by the hell spawned blaze... 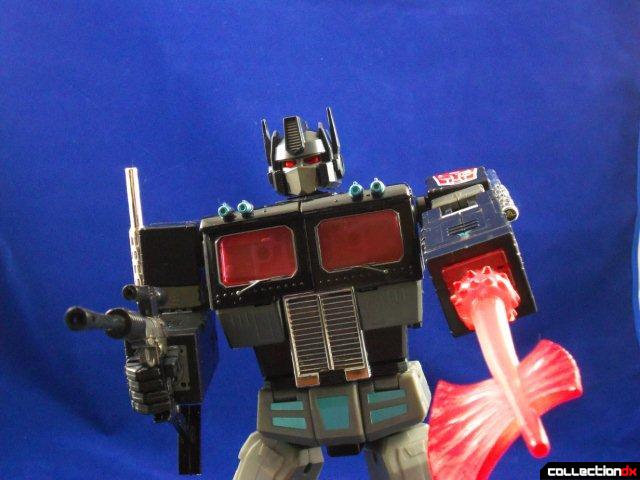 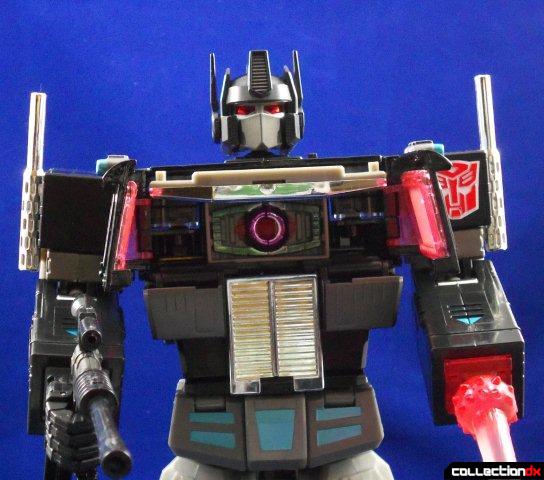 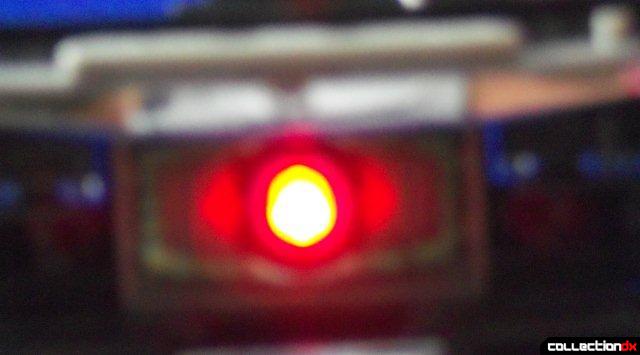 Look into the cold crimson metallic eyes that, when seen, spell your doom! 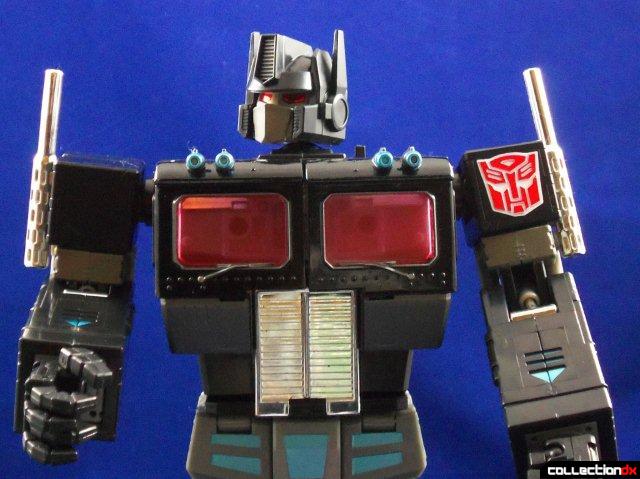 Ultimus Prime uses his blood colored axe to maim and his stolen blaster to destroy... BEWARE! 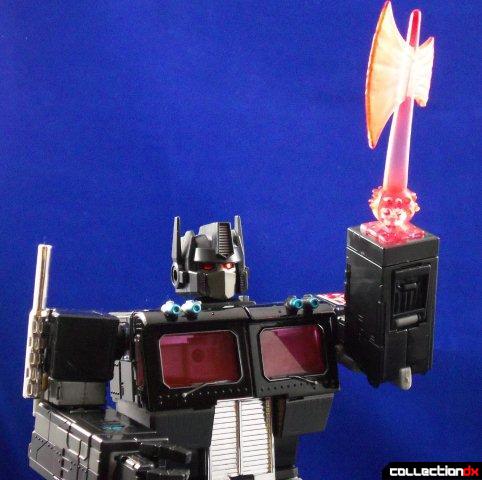 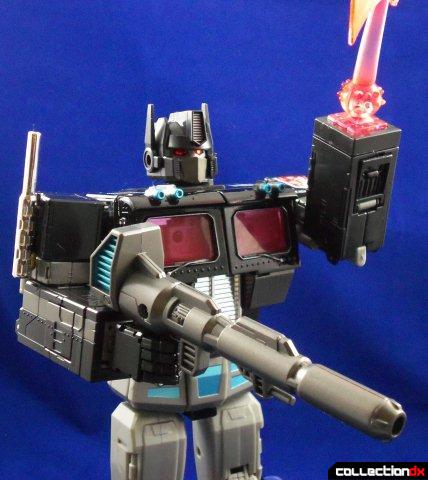 Even though he is evil, he is still every bit as mighty and well built as his polar opposite Optimus. 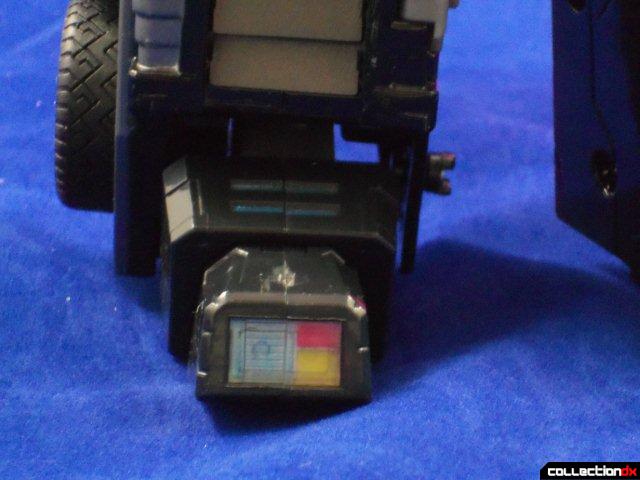 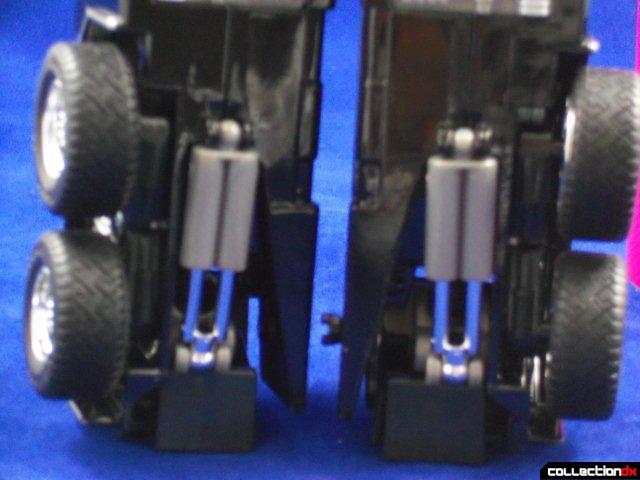 He will dance on your hopes and ignore your pleas. 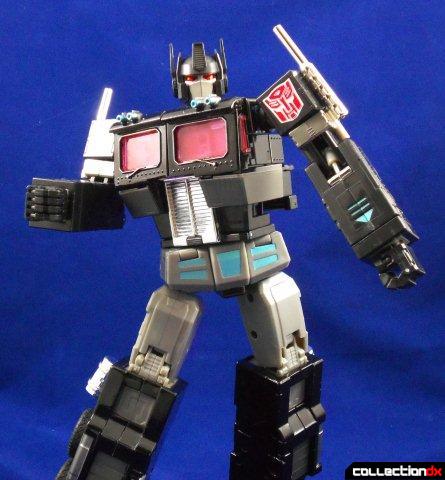 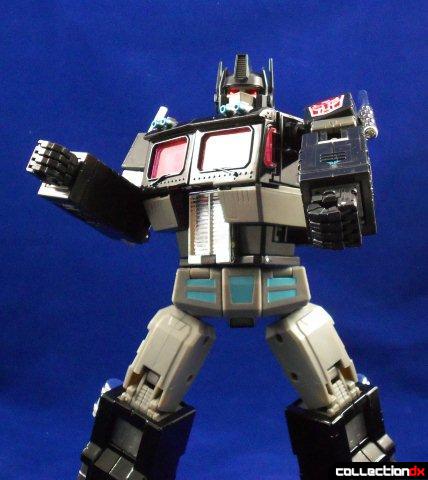 Transformed into his vehicle mode the windshield is scarlet from the road dreams crushed in his titanic wake. 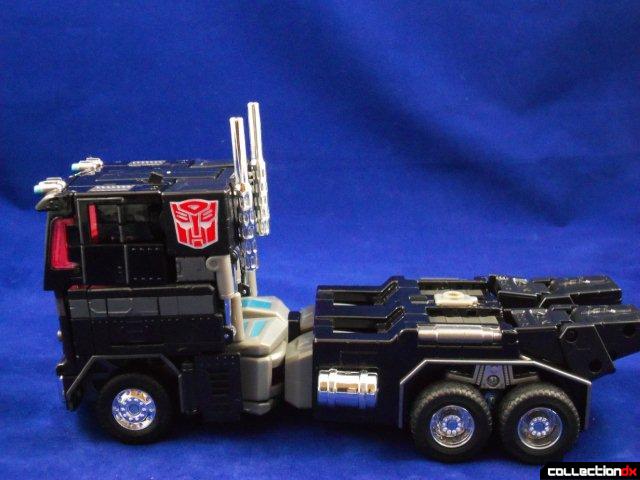 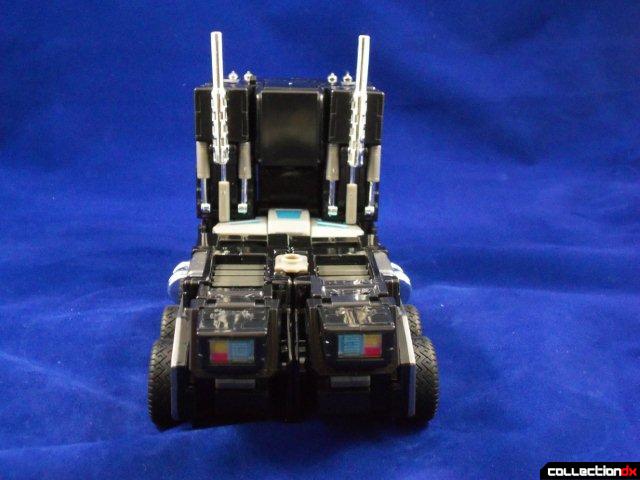 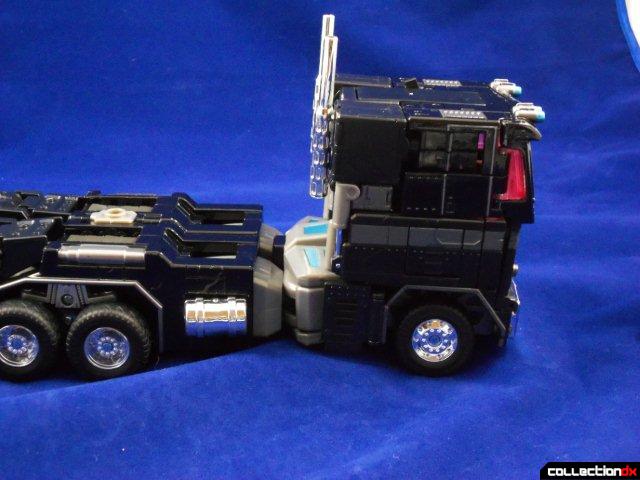 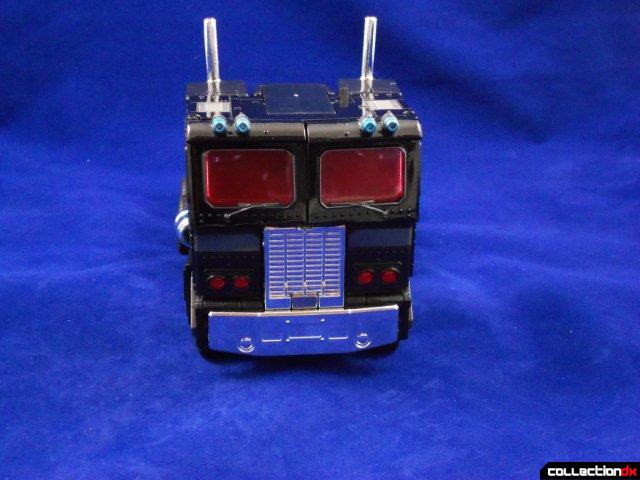 Ultimus demanded additional brilliance to commend his evilness and iGear quickly submitted a royal cape of Decepticon purple to appease him. 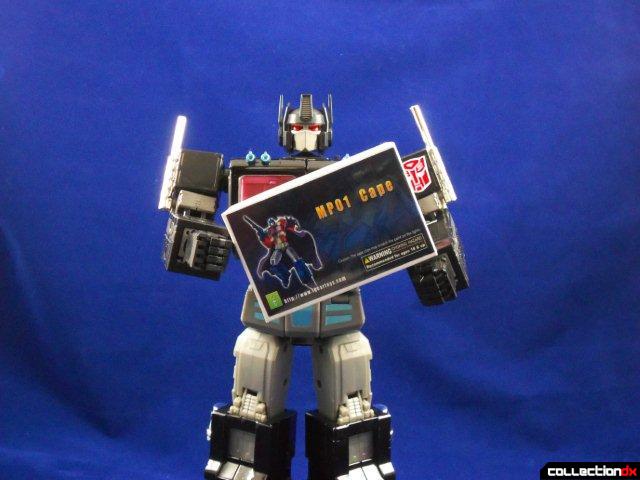 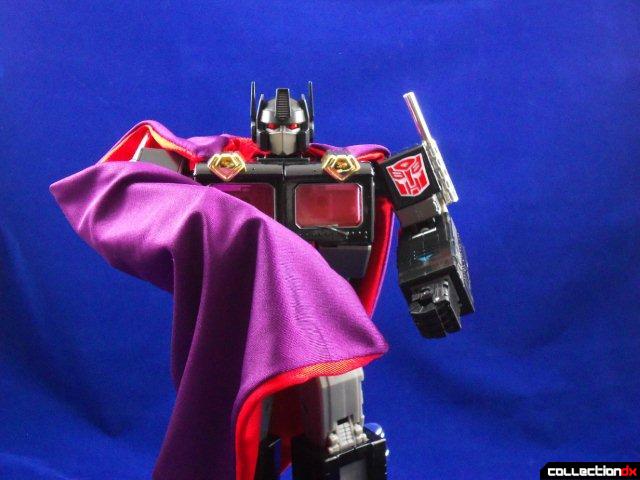 Finally the Energon axe and blaster are too like his nemesis Optimus Prime, so he forged in the life blood of his enemies, swords to maim all that oppose him. 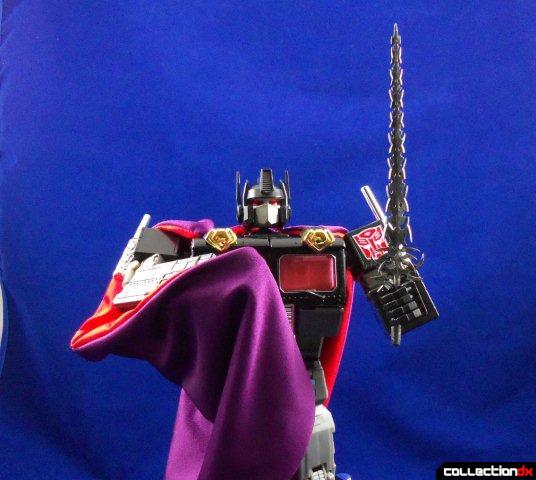 He stands enveloped in black and laced in the red of death. He is mighty. 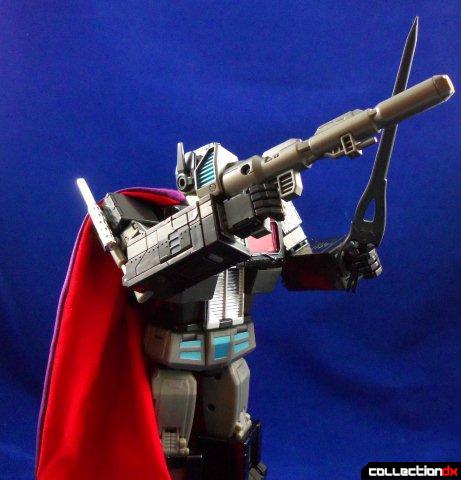 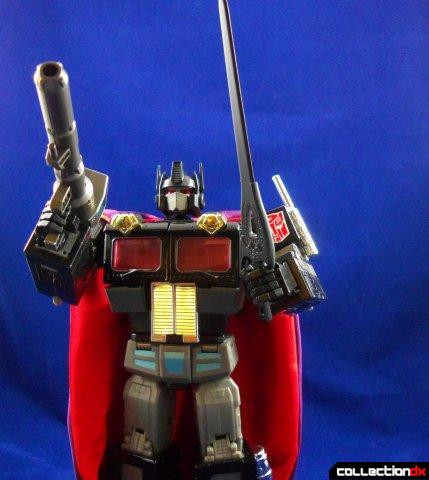 Have faith, as always he will be opposed. 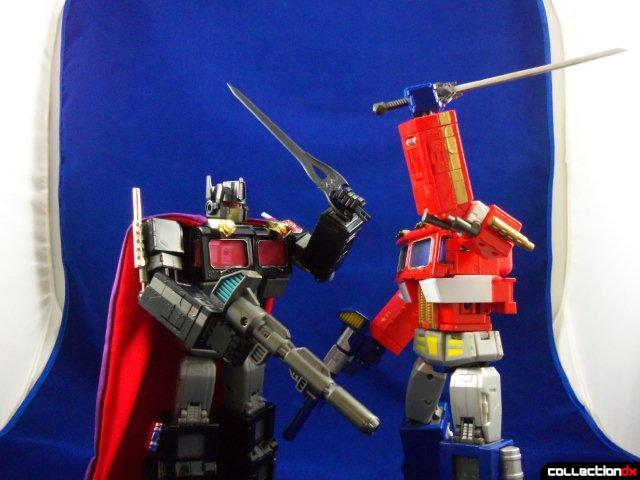 Thanks, was worried some would get annoyed that I made up a name and an actual evil doppelganger . I always love the evil version of heroes in the comics...not the bizzaro version but the evil (their color schemes always rocked too). DC fans reference, always like the Crime Syndicate of Earth 3...Hence Ultraman on my caption.

Love the Dracula cape, very pimpy. Ive been meaning to get this repaint but I already have two versions of this mold. Unless I get one dirt cheap, Ill pass, but it is very nice, thanks for the review

Just loved it. Thanks for doing something slightly off the wall :)

It was fun writing a review like it is a character not a toy...just seemed to be needed when i wanted to add the cape and swords that are not part of the release:)