By far the most unpleasant action figure experience I've ever had in my 20+ years of collecting toys. It's like every horror story I've faced with an old McFarlane toy all rolled into one. I kid you not.

It's a piece of garbage. I wish it weren't so and I could proudly enjoy this toy as its creators intended. I originally used far harsher words to describe it but we’ll keep things PG for this review.

I'm really shocked by the amount of issues with just one random specimen. It also hurts extra because this particular one was the nicest example I've seen so far in terms of paint cleanliness and build quality…But it all went to hell once I opened it. So downhill, so fast.

From reading online forums for years since its inception, it seems that the NECA Pacific Rim line specifically has a very high rate of figure breakage and figures (like Striker Eureka, Crimson Typhoon and the Kaiju (first Knifehead, biggest Knifehead, and both Otachi’s)) whose joints disintegrate over time. I know that Striker Eureka and Crimson Typhoon had issues with their joints just flat out disintegrating from just being displayed on a shelf over time, left untouched.

However, so far my Hong Kong Gipsy and my Coyote Tango seem good. I had to return my only Tacit Ronin because its ankle joint snapped right out of the bubble. I never found another at stores to replace it, but now I really don’t care anymore to do so.

So with that said, I present to you: 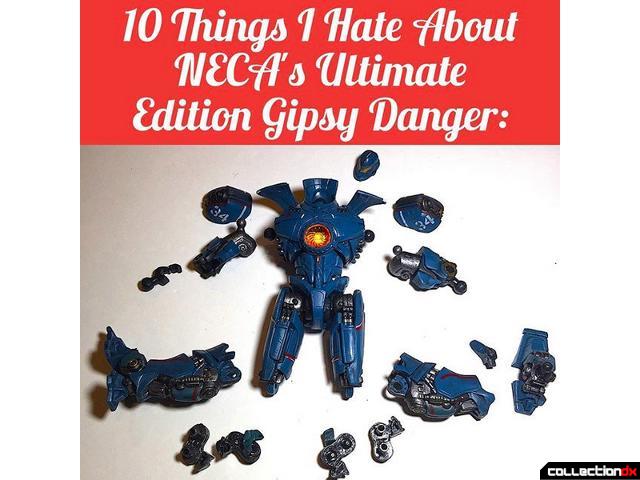 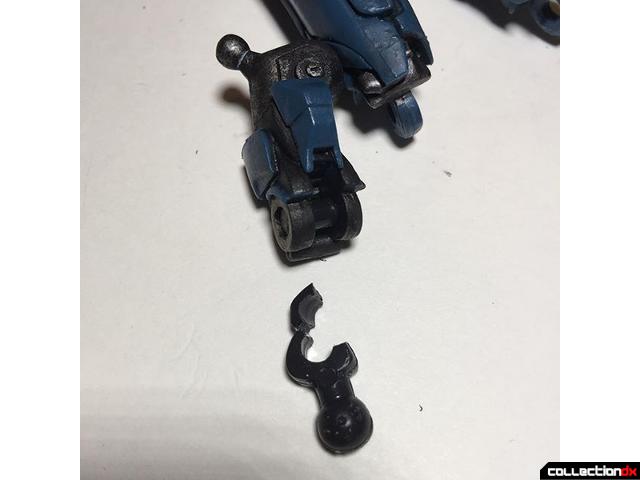 1.) El'broke. Yep. Right out the bubble and the damn right arm fell off. Didn't even move it. The break happened on the backside of the joint so you wouldn't have been able to see it from the front at all when viewing it in the still sealed packaging. Apparently this is a widespread issue for this figure and it happens on BOTH arms, usually when you’re trying to remove them to swap the forearms for the gun forearms because, y’know, that’s an actual feature of it. “UNACCEPTABLE!” 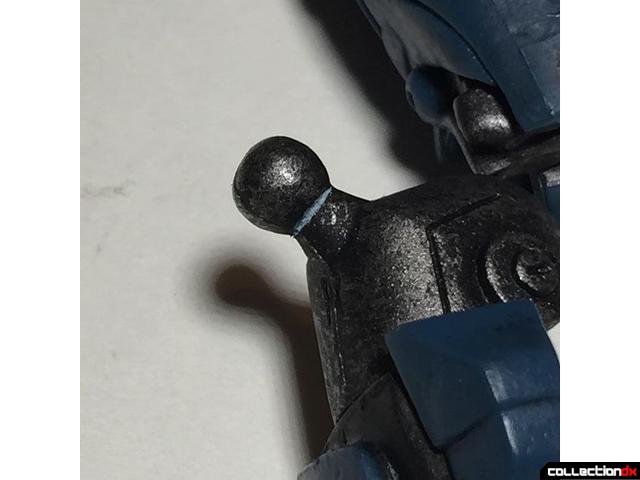 2.) Torn shoulder. After seeing the right side shoulder armor wasn't snapped on the ball, further inspection shows that the ball itself is tearing at the stem. Lovely! 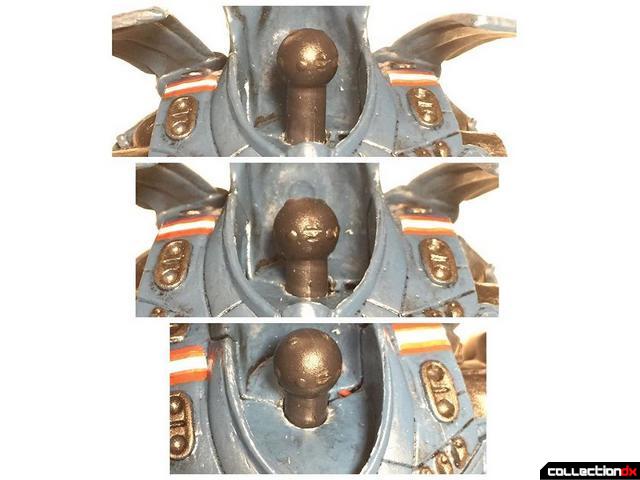 3.) Turtle neck. The head wouldn't move on the ball, so I reached in with my fingernail to get it going. That's when the stem it was on slid up from inside the torso. “A slider joint?” I thought. NOPE! Turns out the damn joint had been jammed down into the torso, causing the surrounding blue plastic to collapse in, exposing the innards (you can begin to see the inside wires in the bottom picture for the light-up chest gimmick). What the hell man. 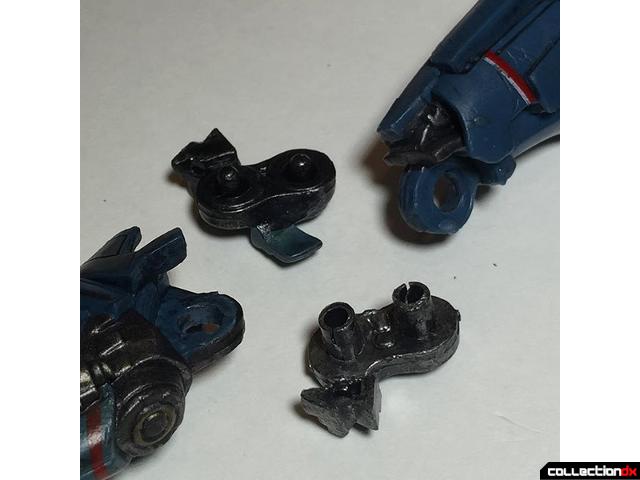 4.) Knee craps part one. The right knee joint exploded right in half upon just carefully moving it. Looks like the inner cylinders are split to an extent. 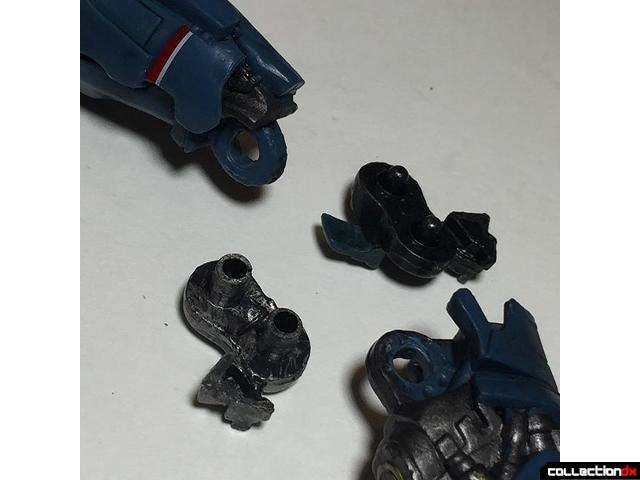 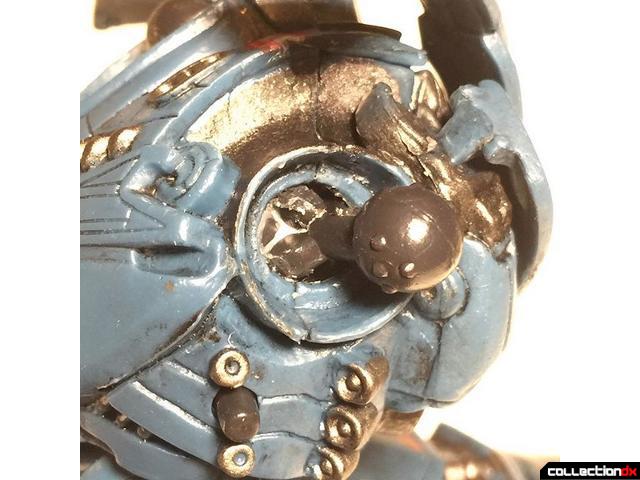 6.) Impending doom! The left arm wouldn't move much, then I heard a noise you don't want hear when playing with toys. That kind of cracking noise that happens with the slightest of movement and freezes your heart in terror. “Oh God, what have I just done?” Upon closer inspection, I discovered that the internal left arm ball is very much stressed and looks like it could crack soon. Ugh. 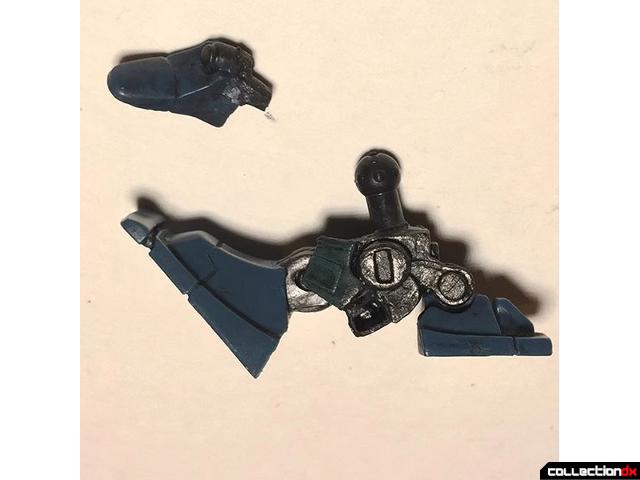 7.) Toe fails! This side toe on the left foot fell right off. Again, it seems to be the issue of weak glue from the factory. What the hell did NECA do to piss off their factory workers? 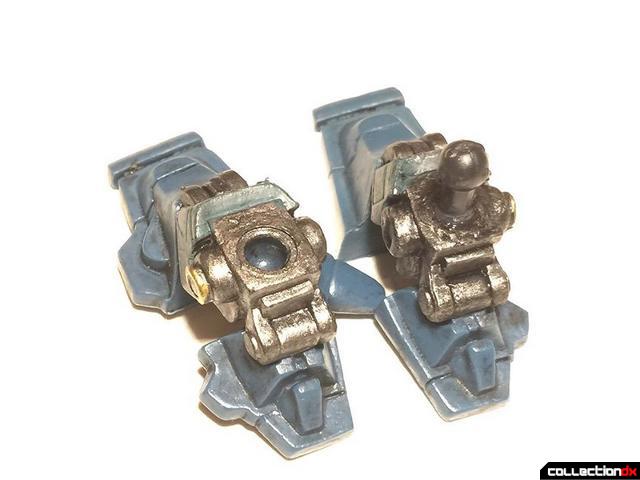 8.) One of these things is not like the other... now how in the hell did they glue the left ball joint into its socket?!?! Glue doesn't even go there in the assembly process!!! (Trust me, I tried to move it and it is not budging. It’s FUSED.) *face palm* ugh. RAAAAAAAGGGGGEEEEEE!!!!!!!!!! 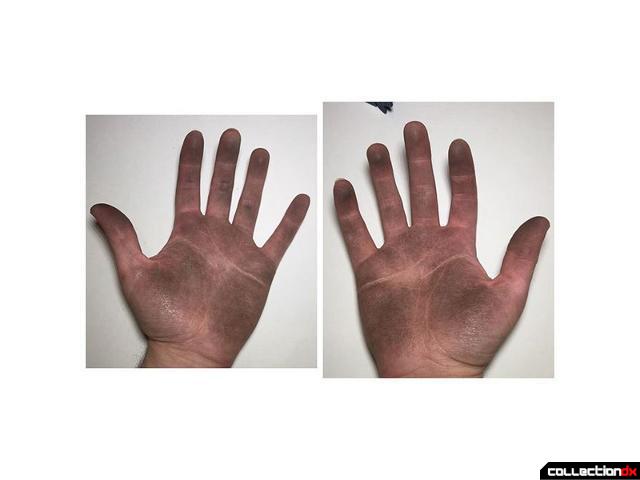 9.) These are my hands after handling this toy. LOOK AT THEM! In all my years of owning toys that featured weathering, I have NEVER had this happen to me. This is unprecedented. Never before has a toy left me looking like I just replaced my car's breaks after handling it for about ten minutes. Is this life? Am I dreaming? What is real anymore? 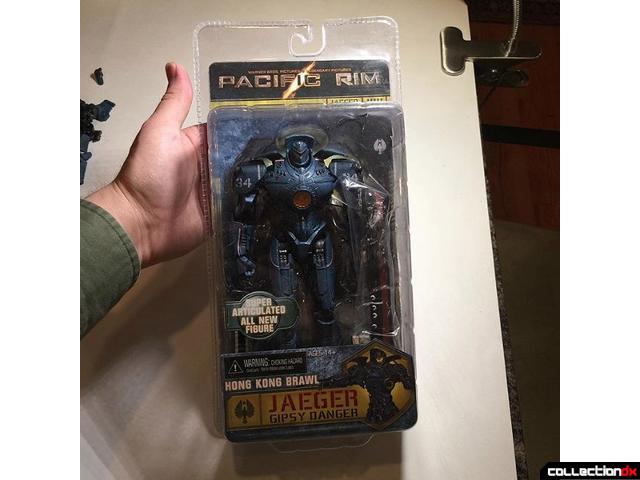 10.) We can't have nice things, but if you must own a NECA Gipsy-anything, just buy the previous Hong Kong Gipsy Danger instead. I know, I know, it has less articulation, less painted details, less accessories, and no light-up gimmick but Goddammit it works! IF you absolutely must own a NECA Gipsy Danger (and you don't want Kaiyodo's EXCELLENT Gashapon figurines, Max Factory's model kit, Bandai’s Soul of Chogokin, or whatever future superior product any other company will probably spit out in the next ten years), buy the Hong Kong "boat sword" version instead. The only issue I have had with that figure is one of his side foot toes came unglued, and I can easily fix that with some superglue or clear epoxy glue.

But as far as the Ultimate Edition is concerned (your experience may have greatly varied compared to mine), I CANNOT recommend it AT ALL. And it really pains me to say that because I wanted this figure so GODDAMN MUCH. But this...this is the worst of the worst that could've happened. I never imagined it could be this bad. One quality issue with a toy is one thing, but ALL of these problems with one figure? It really leaves a bad taste in my mouth SPECIFICALLY with NECA's Pacific Rim figures. It’s like they just gave up at the finish line (like Bridge Direct’s Smaug figure). When NECA announced this item at the end of their Pacific Rim toy line, it seemed like they were going out with a bang, but instead we got a dud. I’m beginning to question if Guillermo Del Toro has even handled a figure from this line. If I were him, I would be embarrassed to have my name associated with these sub-par products.

Knowing what other companies can now produce, like Bandai and Diamond, I know I wouldn't approve these NECA Ultimate Pacific Rim figures for sale without changes at the design level to avoid these issues before even going into production. Stronger joints and plastics were desperately needed. Their Predators on the other hand, still seem top-notch though, so they got that going for them. Yeah, I've had a couple quality control issues with the Predators as well in the past that warranted exchanging the figure for a new one, but it was always something non-fixable like an incorrectly molded joint or two left legs. These QC issues with Ultimate Gipsy are just dangerous. I’m glad NECA is no longer making Pacific Rim toys. Thankfully Bandai’s recently debuted figures and model kits are proving to be worthy successors of this toy license and deservers of our hard-earned dollars. With the mass-market release of Diamond Select’s Pacific Rim offerings on the horizon, we will soon know if they are just as good as Bandai’s or just as forgettable as NECA’s. At least we can rest assured, knowing that NECA’s 4-year long toypocalypse…has finally been cancelled.

3 comments posted
Now you know why they get

Now you know why they get called "NECAN'T".

I honestly can’t believe the fan base that NECA has given how every figure of their’s I have ever laid hands on has had these sorts of issues? The plastic they use is crab. It’s like recycled chewing gum. Even new in the box a figures lifespan is limited in months not years. Once the cheap assed pvc they use fully outgasses the stuff just disintegrates. At least the infamous Popy Blue took a few years.

One of the more entertaining things in all of this is seeing the long time NECA PacRim fans lay hands on the Bandai Robot Damashii (Robot Spirits) PR2 figures and just about break down in tears at what they should have had all along.

This is the reason why I never bought another NECA action figure. They had years to address their QC issues and yet they still can't solve it.

Whether it's a break in the joint, misaligned legs or missing accessories...these issues still plague NECA up to now. That's why it's a disappointment whenever I see an interesting figure made by NECA, there's a good chance that figure will break/have defects.