Well, I think this is a first for me: Someone else sent me a toy to review for the site! Our very own TattooedRobot was very generous and shipped me this set out even though I was originally planning on splitting the set with him. I'm incredibly humbled by this and grateful for his continued patience with my inability to get things done on time!

With that in mind, let's move right along! Maketoys is a company that has made quite a number of third party Transformers toys now. They're probably most well known for being the people who made the Giant AKA the other Devastator combiner along with the Battle Tanker G2 Optimus Prime upgrade kit. They did a lot of big expensive toys and sets that looked really cool, but were always out of my price range and interest. So when they announced they'd be doing smaller character and toys I was interested. And when we learned that they were also going to be characters from the beloved ongoing More Than Meets The Eye comic series from IDW, I was damn near ecstatic.

So here is one half of the set: Maketoys' Trash-Talk. He bears a striking similarity to the Transformers character Swerve. Even the vehicle mode which at first seems like a whack of Cybertronian nothing is accurate to the comic! It's tiny details like that that go a long way to make me like this guy. 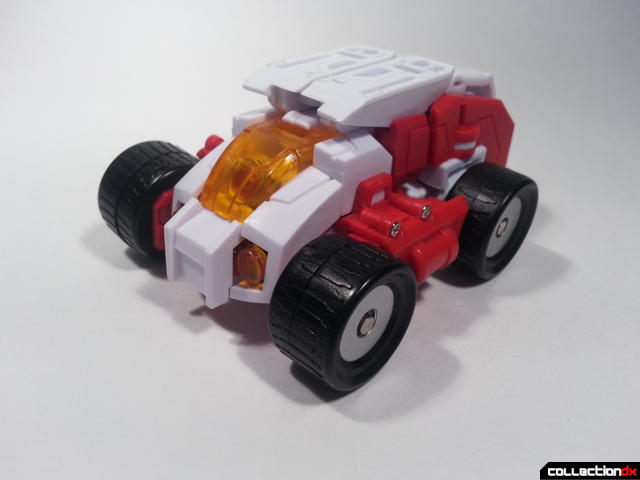 Speaking of the vehicle mode, let's take a better look at it. It's a cute dumpy little truck thing. There's not much to this mode, but its large wheels and chunky edges really make me enjoy it. 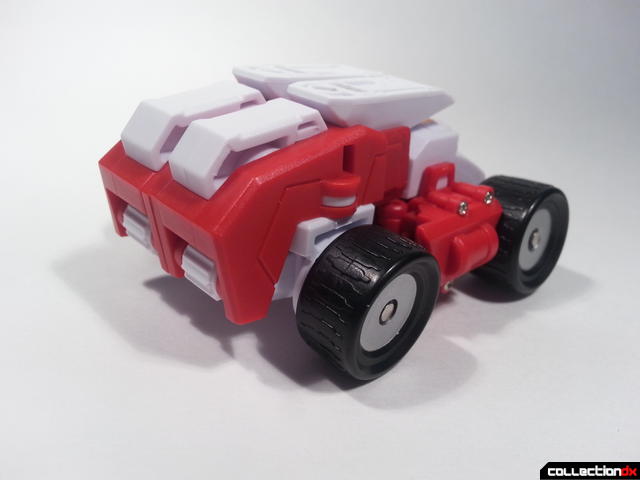 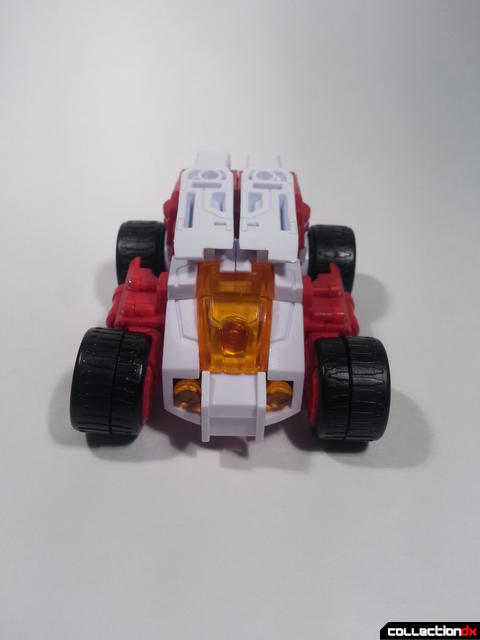 Plus it has a few extra features in this mode that go a long way to make this mode more expressive as well. For one, the windshield and open and close. In addition to that though, you can actually move the little camera eye inside around! It's ball jointed and makes the vehicle mode much more expressive. 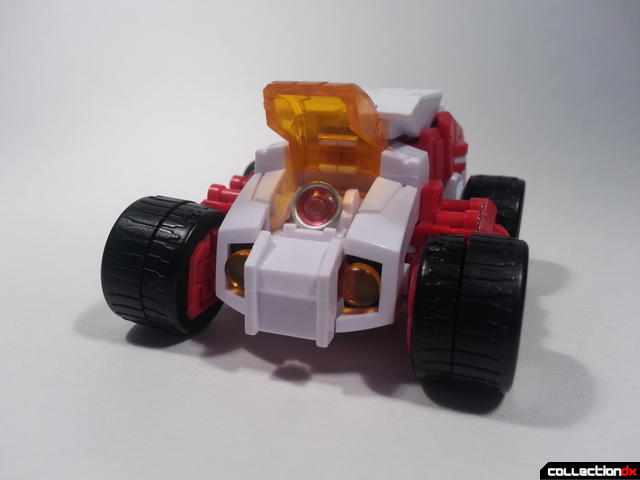 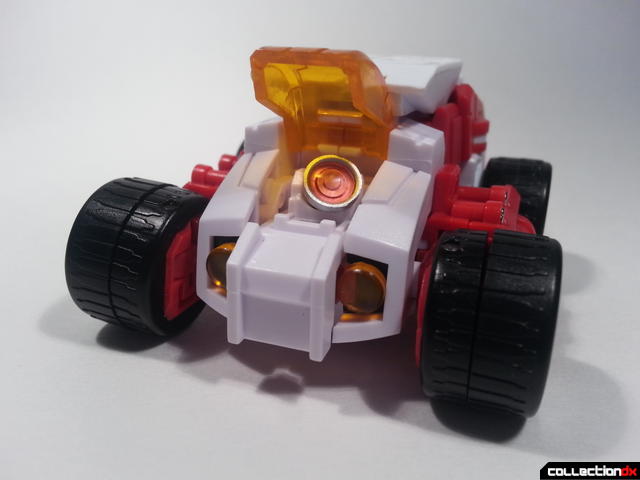 One thing worth noting is that for transformation, this toy basically follows the same scheme as the original G1 minibot toy; unfold the legs from the back of the car, and then pull the arms out. Sure there are a few extra steps here and there, but for the most part it is very faithful! 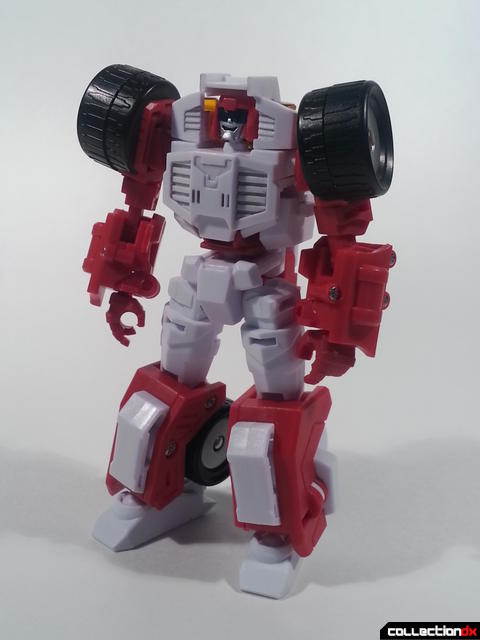 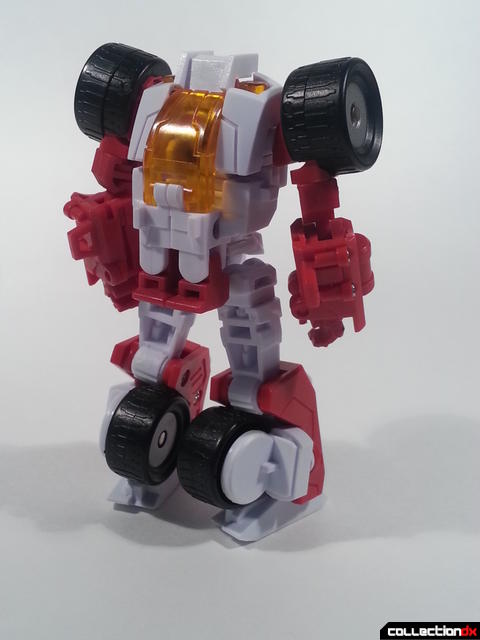 Once you do that, you have a very handsome looking robot. It's one of those toys that I think looks larger in pictures than it actually is. When I got them in hand, I certainly remember being amazed at how much smaller they were in hand! Despite his small size, he's surprisingly chunky in a delightful way. 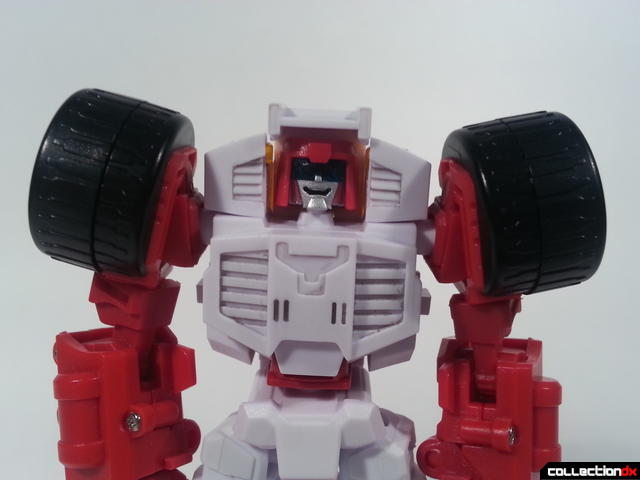 The headsculpt on this guy is fantastic. He looks happy, cheeky, and honestly like kind of an ass, which is totally perfect. 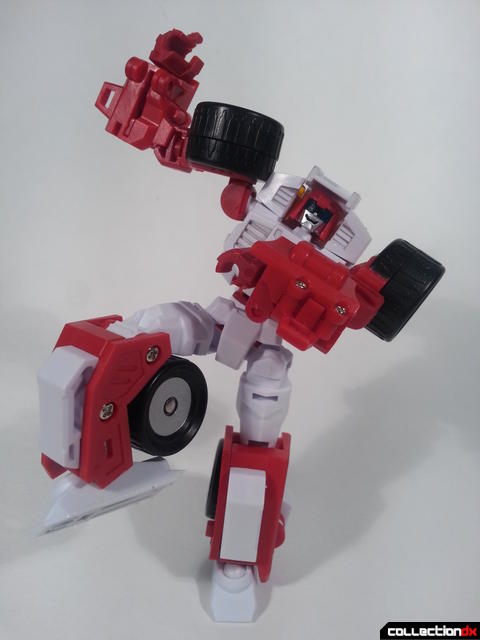 Even though he's pretty small, Trash-Talk is covered with joints. He has balljointed shoulders with a pullout hinge, and awesome ball jointed ankles and hips for all sorts of poses. 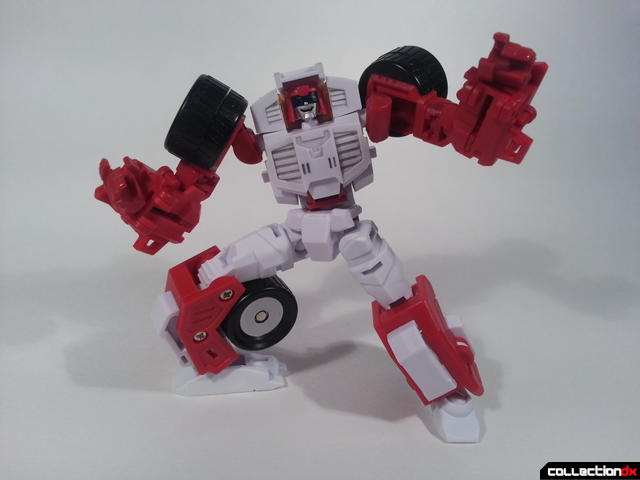 He's able to get very wide legged stances thanks to his ankles. 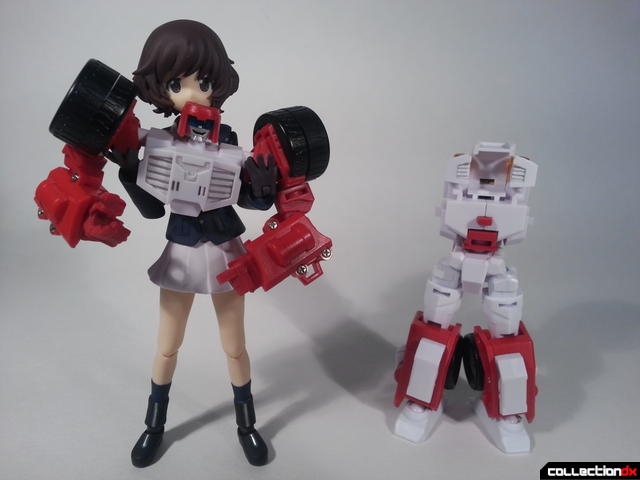 Technically the head is balljointed as well. However because of how his head is in a cavity, it's kind of hard to get to. Because of that, you need to actually pull out his entire torso to get to it. 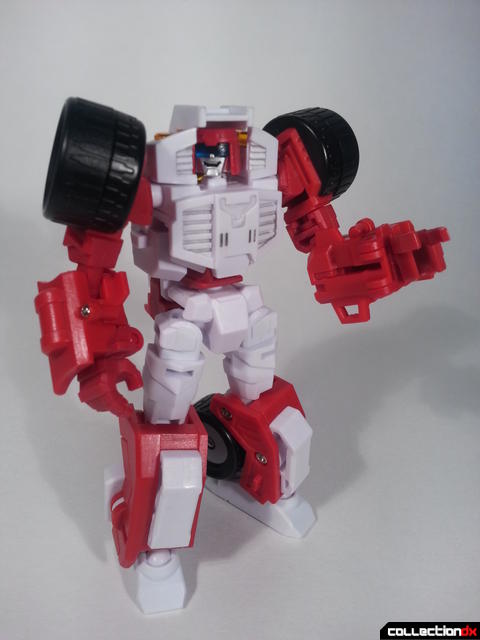 After you do that though, you can tilt it here an there without any trouble at all!

Having open hands makes Trash-Talk pretty expressive, and also able to hold a conversation with just about anyone. 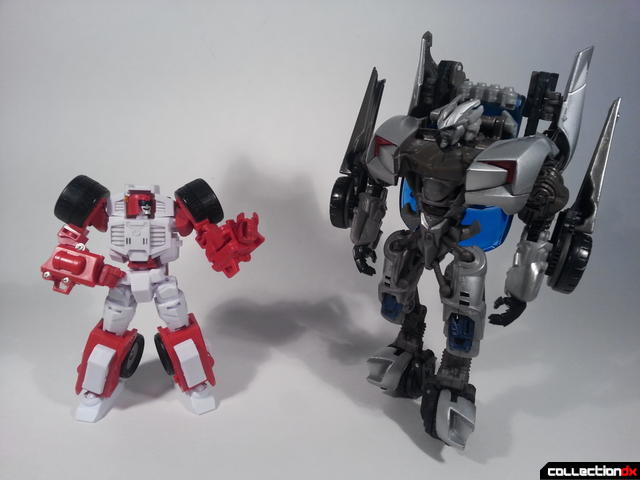 “Hey, you know Sideswipe, I was a Corvette once too!” 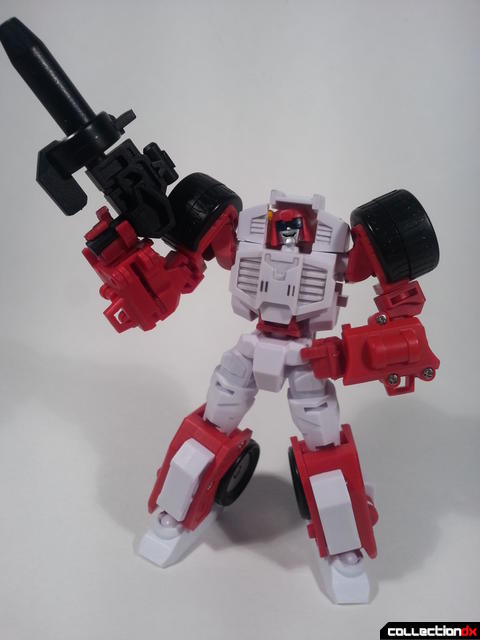 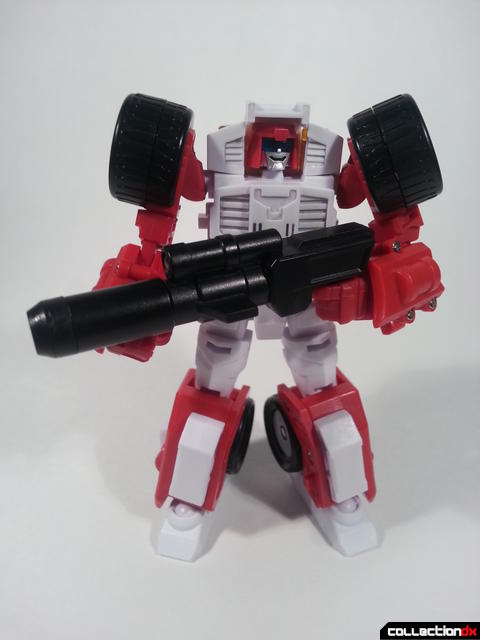 Both guns are simple and mostly just black plastic. The longer rifle looking gun also has a piece of clear pink plastic for a sight at the top. Trash-Talk looks good holding both guns, in that he looks really good looking like he has no idea what he's doing with this weapon. 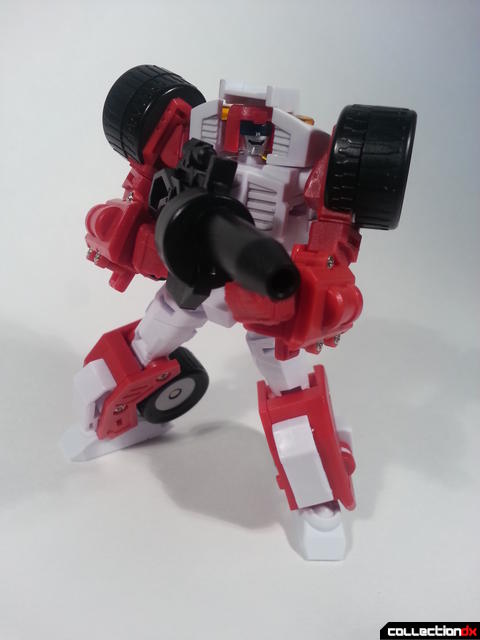 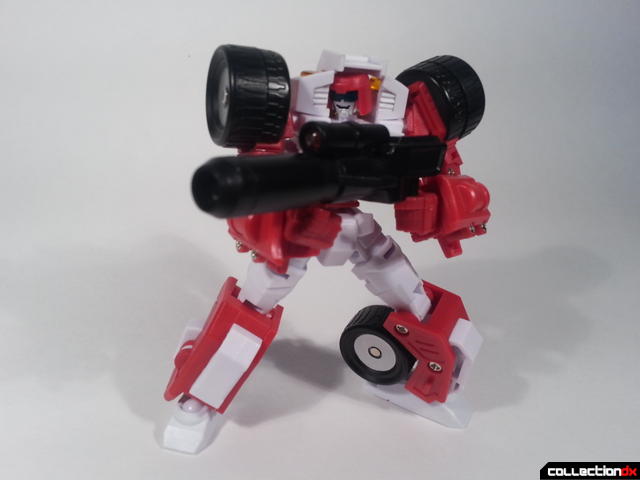 I mean let's be honest, Trash-Talk isn't exactly the smartest guy after al-WAIT NO, DON'T! 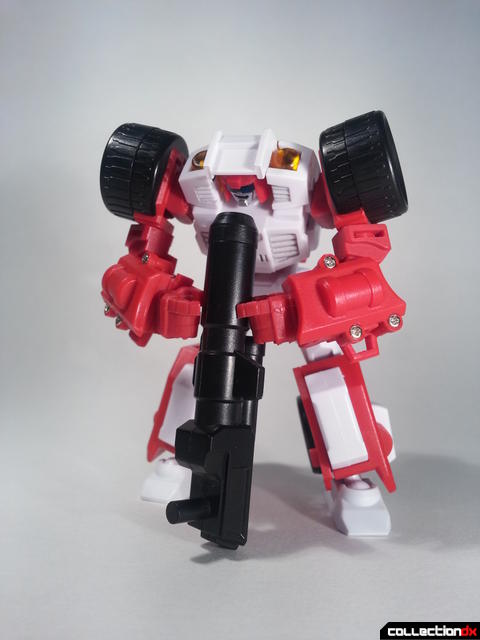 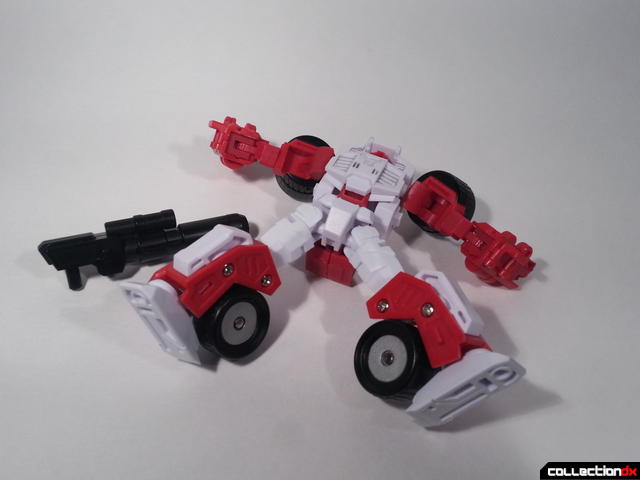 … Well that makes explaining the next accessory easier. Trash-Talk comes with an alternate head for that time he FREAKING SHOT HIS OWN FACE OFF! 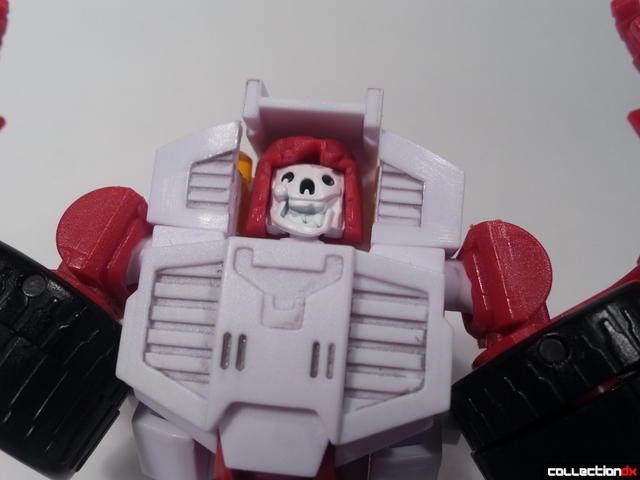 It looks accurate for sure, and if you really want to have a dead robot on your shelf, it's perfect for that. As for me, uh... I like my robots to be more alive. 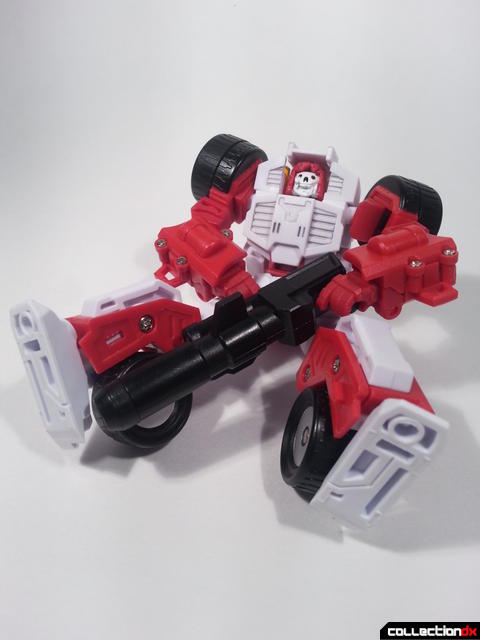 The most important thing that this set comes with though, is a small tray that Trash-Talk can hold, along with a few Energon shots and a pitcher! As the Lost Light's bartender, these are absolutely perfect and look right at home in any Transformers' hands. Even though the peg is 4mm in size, since they are conical, they can still fit in any other figures' hands without too much trouble which is great for larger characters. 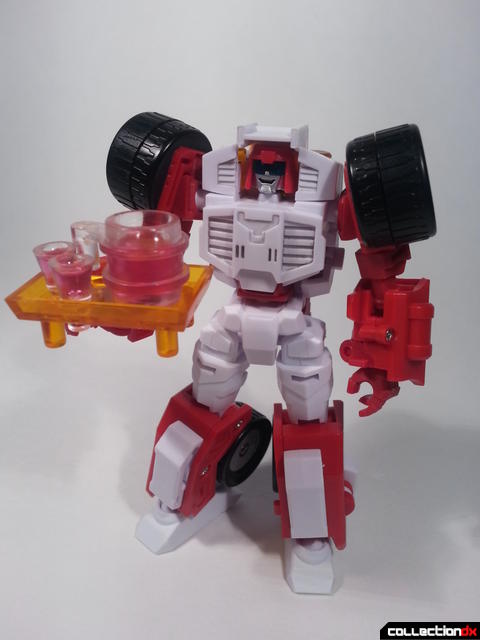 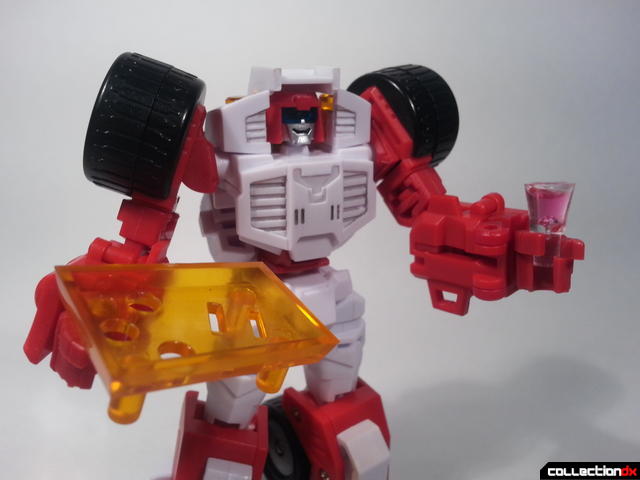 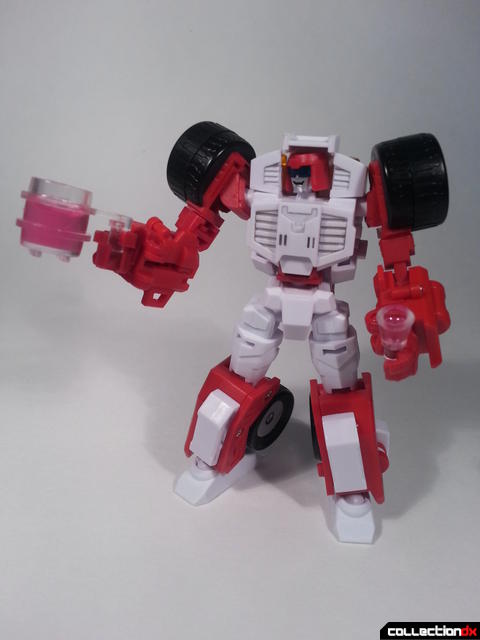 On top of that, you can even peg the tray into Trash-Talk's vehicle mode to make him bus around like a waiter robot. 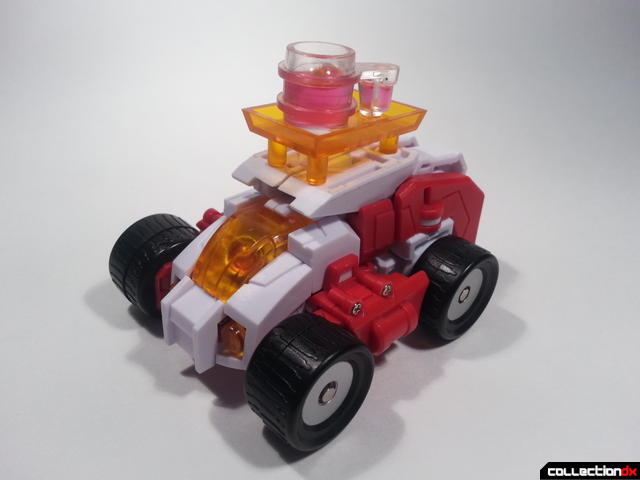 Overall, Trash-Talk is a fantastic little robot that oozes personality. He's a fan favorite character, and he's been given the love and attention that he deserves between his awesome toy, and very memorable accessories. Combine that with his pretty lower pricepoint, and you have a set that's a real winner if you ask me.

And the best part? There's a whole other robot that he comes with that I'm gonna talk about next time!

3 comments posted
Absolutely worth that wait!

Absolutely worth that wait! And 2 reviews for the price of one. I am glad you enjoyed them.

Also.. do you have "My First Blaster?" (a Brainstorm genius creation!)

MyFirstBlaster, Sadly is a separate purchase.