This review will cover all a knock-off set of five G1 Transformers Aerialbots as well as their combined mode, Superion. I'll discuss my thoughts and any issues that I had with this set. The members are Air Raid, Fireflight, Skydive, Slingshot, and Silverbolt. They are what's known as "Scramble City combiners" meaning that one large member becomes the combined form's torso while the other four members become the limbs, which are also interchangeable. In the original instructions, each of the smaller members had a "mini jet" mode. The smaller Aerialbots also came with small handguns which were unfortunately omitted from the KO release. 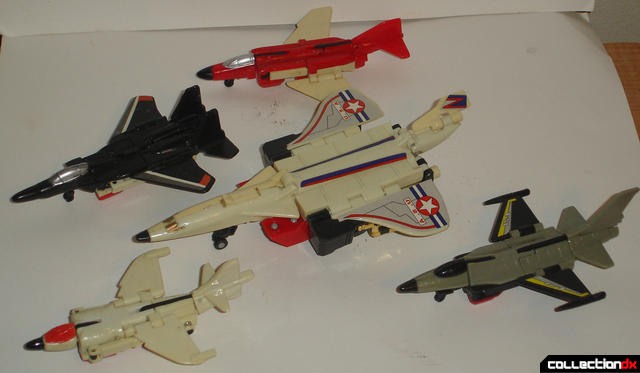 I bought this set a few years ago around Christmas time, I'd say maybe 2005/2006-ish. Matter of fact, I was in high school at the time and for some reason I was just starting to get into the original Transformers. (I guess you could blame either Transformers Armada reruns, the G1 Dreamwave comics, or the commemorative re-issues) Along with this set I also got Devastator (yellow and black) and Defensor (red Hotspot). Out of the three of these, and to my dismay because I love jets, Superion was the weakest one of all. Later on in the review you'll see why... 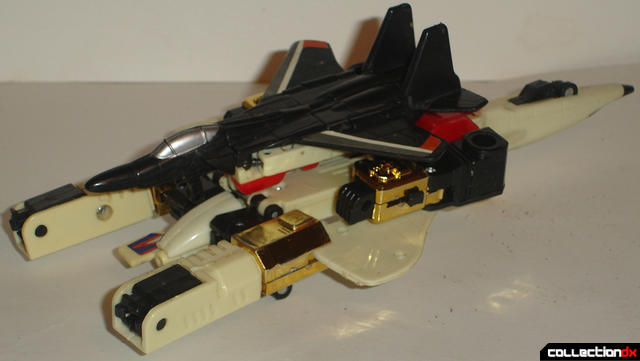 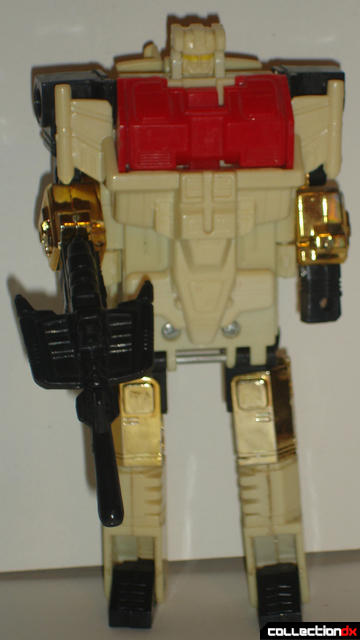 First up is the aerophobic leader, Silverbolt! (Yes, a robot that transforms into an aircraft who's also afraid of heights. Seriously, watch the episode "The Key to Vector Sigma" pts. 1 and 2). Silverbolt transforms into a white Concorde SST. Surprisingly the stickers stayed applied after all this time, albeit a bit misaligned. Not surprising though, is the degree of yellowing this figure has suffered. Not sure if you can tell from the pic, but one side of the jet nose is white while the other side is discolored! You can get a better view if you scroll down to the Superion section of the review. Despite all this there is one redeeming quality: THE SPRING LOADED LAUNCHER WAS LEFT IN!!!! Not only does it work, but it's also quite powerful! Now I can launch the Aerialbots (or any other Autobots) into battle whenever I please.

Here is Air Raid being fired from the launcher. 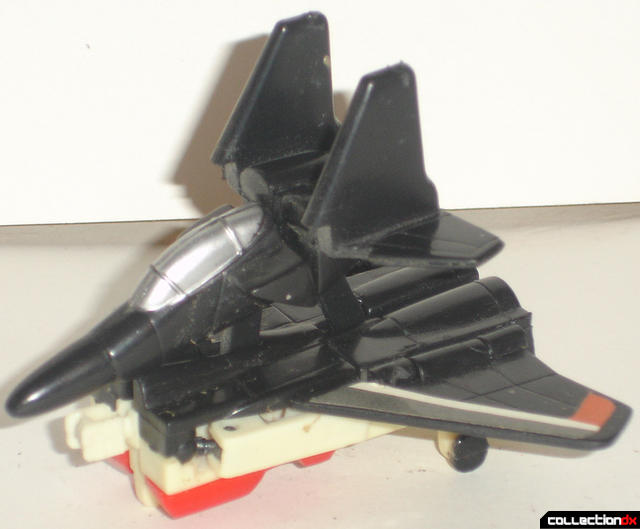 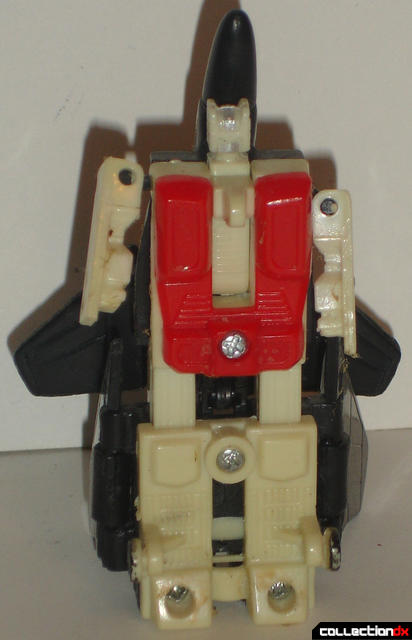 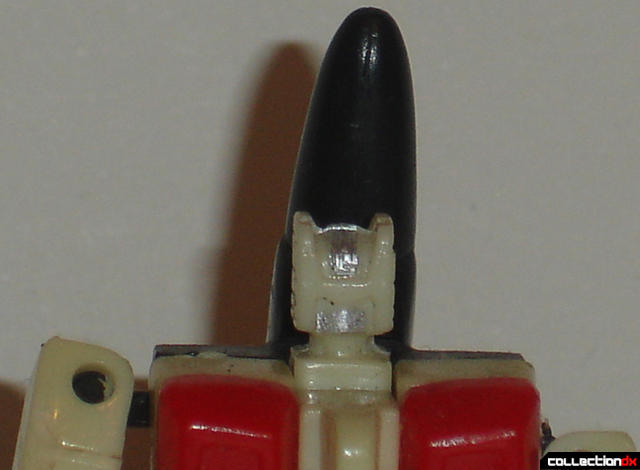 Air Raid transforms into a black F-15 Eagle similar to the Decepticon seekers. Arms are a little loose, but other than that, I've had no problems. This is also my favorite Aerialbot because I love his alt mode and the color of it. Kind of like a smaller, simpler version of Skywarp sans the purple.

And here is Fireflight shooting off the launcher. 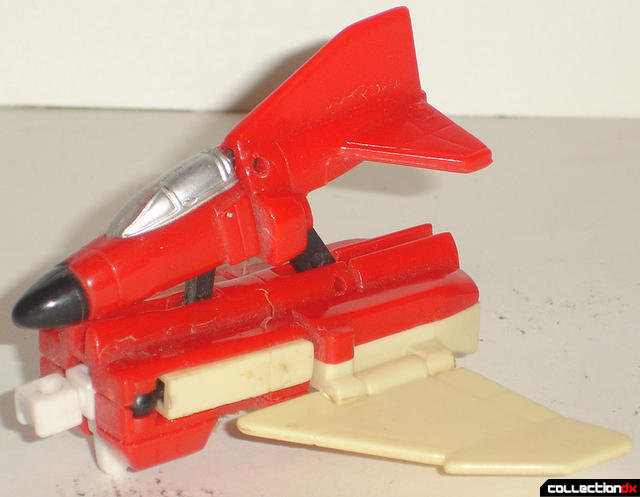 Fireflight transforms into a red F-4 Phanton II. Besides lose arms, it's hard to get the nose cone and tail fin to stay together when transforming into an arm. Slight yellowing on some of his white parts but nothing too serious. 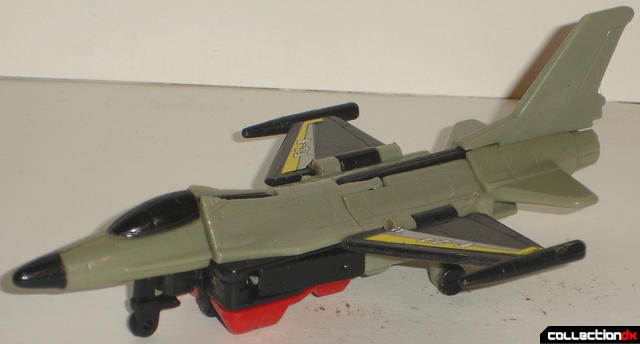 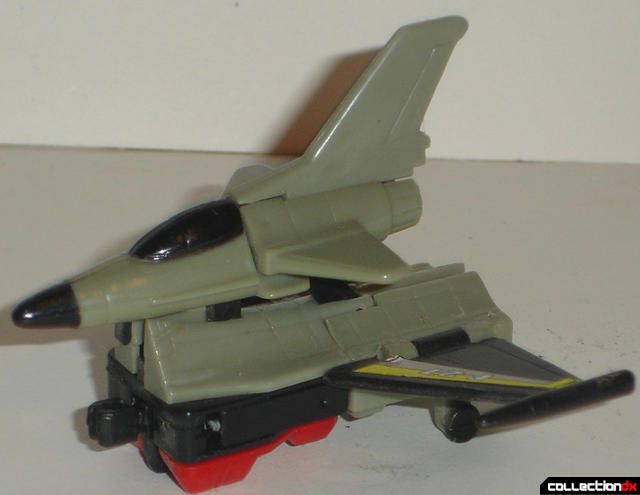 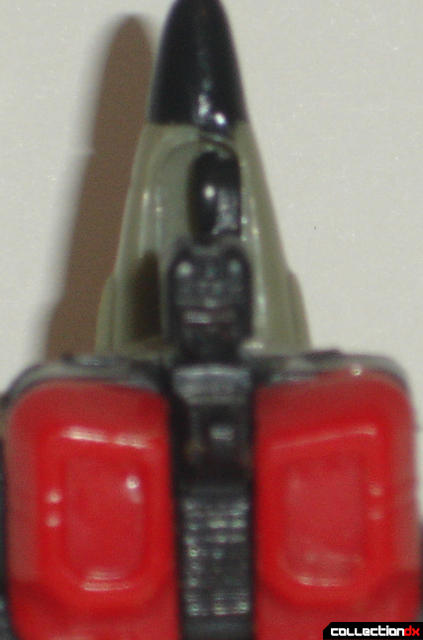 My second favorite of the Aerialbots! Skydive transforms into a grey F-16 Fighting Falcon jet. The only issue I had was that the right arm broke near the shoulder. It doesn't really bug me because I just pose both of the arms outwards. 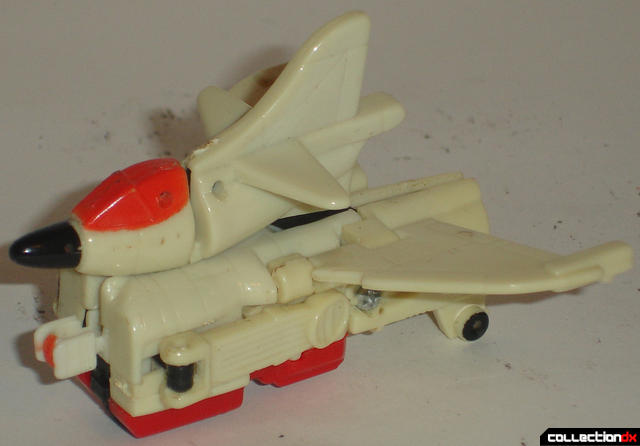 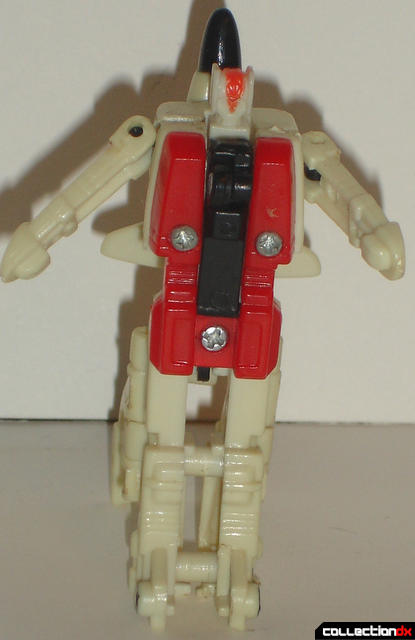 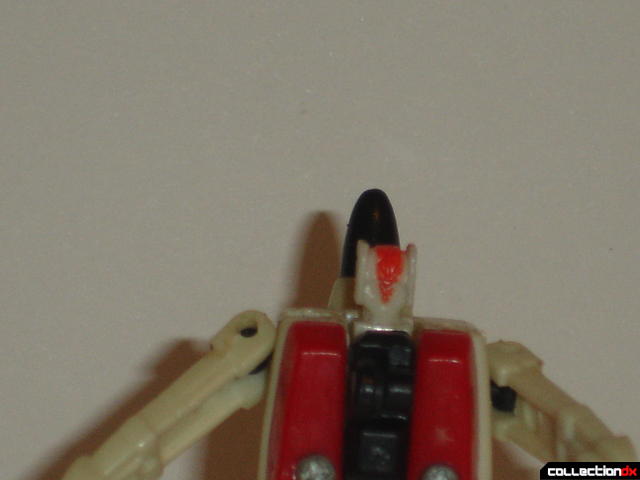 Slingshot transforms into a white Sea Harrier Jumpjet. The face is almost unrecognizable because of the orange paint blotch in the middle of it. The yellowing is there but not nearly as bad as on Silverbolt.

And last but not least is Slingshot. 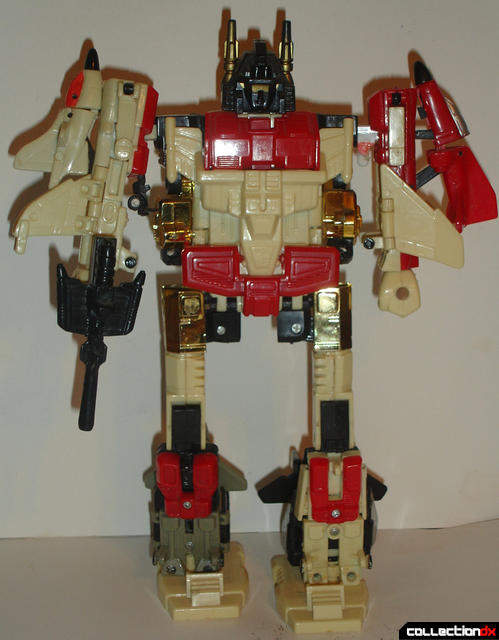 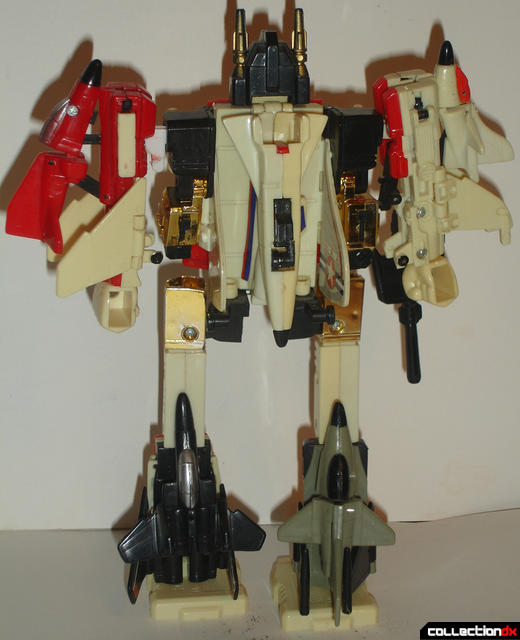 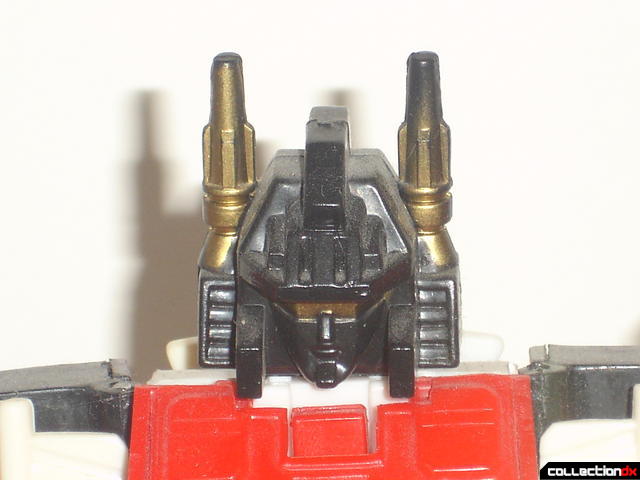 Superion is the combined form of the five Aerialbots Airraid, Skydive, Slingshot, Fireflight, and their leader, who is also the largest of the group, Silverbolt. His accessories include 1 head, 2 fists, 2 feet, 2 pieces of armor, and a gun. The original version came with a ramp but this one did nott. No big deal though. After I had him combined I discovered that even though Superion looks good, he is quite a flimsy thing. That's not where the quality control ends, oh no. 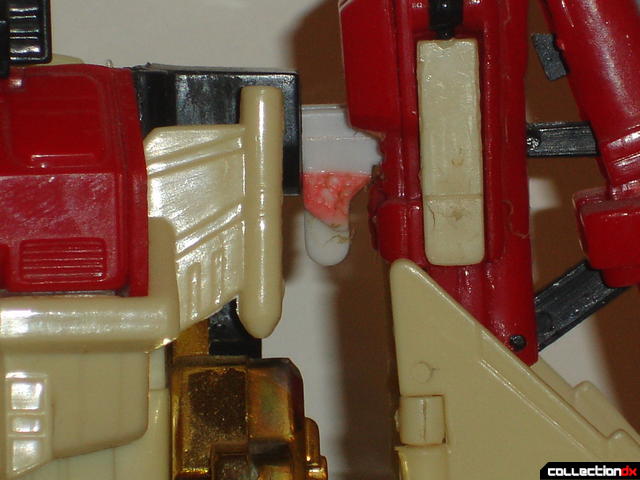 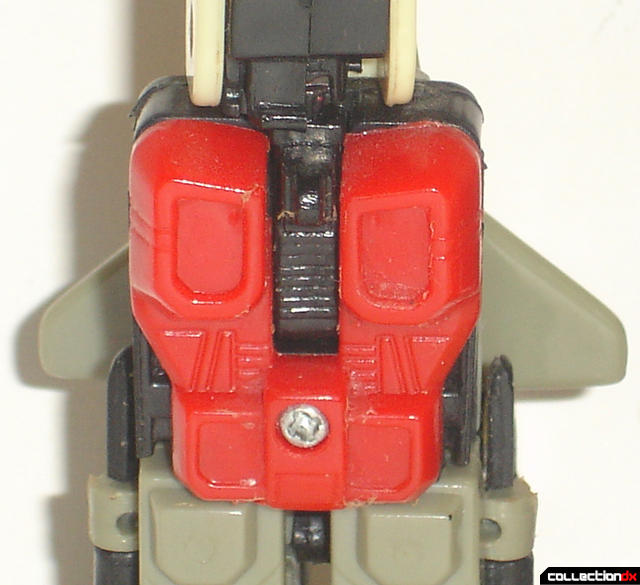 For a few months I had him in an air tight container under my bed with several other figures (some KO's as well) and when I brought him out most of the white parts had turned yellow. Not only that, but the tab on the left leg snapped and will barely hold an Aerialbot limb. Trying to stand him up is tricky and don't bother to pick him up. Another thing mine has trouble with is a weird sticky residue on some of the paint. I think it may have been left over from the cheap stickers falling off. The visor and antenna looks like they were spray painted, which they probably were. Out of the numerous KO's that I own with white on them, Superion is the ONLY one who has yellowed. Even the whites on my KO Defensor are still crisp and clean... and I bought them both at the same time, plus they've been in storage for the same amount of time as well! For six bucks and a chance to own an original mold, I can't complain too much. Matter of fact, if I steady him carefully and try not to handle him much, he doesn't look half bad standing on the ol' shelf.

Based on my review, if you have the original Superion then this is an easy pass for you unless you just want one with a launcher. If you don't have a Superion and love to collect KO's, then by all means pick him up if you ever see him somewhere. I wouldn't make it a quest to hunt him down and be careful not to pay too much for him either.

I have the original Superion, as well as Abominus, Piranacon, and Predaking. I had bought the KO version of Defensor(red Hot Spot), but when I opened it, the whole left leg of Hot Spot fell out of the package. Not the only KO I've had issues with. Oh well...

Sorry to hear that, bro. The KO Defensor I have is as solid as a brick and because it is made of slightly inferior materials, I just leave him in combined form. The only issue I had was the front part of Groove broke off and I had to buy a replacement.

As janky as this KO looks, it's a pleasure to see. The Aerialbots giftset was my "big" Christmas present in 1986, and I remember each bot very well. Silverbolt was always a disappointment, even to a 10-year-old. Slingshot was probably my favorite, with his weird little spoon-arms that didn't tuck away like the others - he wasn't a great jet, but I was a Harrier nut. And, yeah, I always wanted Air Raid to be one of the Seekers somehow (although I didn't have that term at the time).

Anyhow, my set is long gone, but thanks for dredging up these memories.

Like I said, this is one of the "weaker" (read bad) KO's that I have lol, but glad I could bring back some old memories!

Did Polyfect make it? Ha ha they churn out some real garbage. I have a "reissue" type KO Defensor.The set is good but the packaging has misspellings like "label sheel" and "Befensor."

I don't know but I do remember "Quick Change" being on the packaging so it's possible.

I can sympathise about crappy plastic on KOmbiners. I picked up an incomplete Ruination in a big box of Transformers and Gundams at a toy collectibles store, and the three limb robots in the box were bootlegs. Movor has flimsyish plastic in his shoulder joints -which were also overly stiff and didn't want to swivel. One of them is destroyed but should be resurrectable. I hope. Armorhide is okay. But Rollbar... His green plastic is brittle. Really briittle. He has bits of matchstick glued into the hollows of his right arm and his head/connector bar piece, and I resorted to filing down his joint bits to make them looser and thus reduce stress from transformation. I've had to glue the various sections of him together so many times... Argh.

If it's any consolation, you should be able to pick up a beat-up real Silverbolt for cheap and put the launcher from the KO in him.

Some time ago I found KO's of all four of Valdigus' (Japanese Ruination) limbs in 2-packs. I thought everything was good because I was planning on using them with my desert camo Mega-Octane along with the weapons because I got tired of looking Ruination's bland colour scheme. To my horror when I opened the set up all of their heads were flat and their combiner pegs were non-existent. They had loose joints but that's to be expected. I gave them all away, but I kept Rollbar's pistol and B.F.G. and Ro-Tor's helicopter blades. Which I was very surprised that they even rotated, let alone be removed.

That's a good idea about Silverbolt. I never would've thought of that. It's safe to say that Superion is one of the few KO's I own that will serve only as a place holder until I get the real thing. Lol.

Speaking of the launcher, can we get some good shots of it, maybe even an internal? I wanna see if it's possible to just mod my Silverbolt's dummy one.

In particular, what I need to see is what the trigger looks like so I can fabricate my own.

Thank you. Ugh, bloody Google was no help at all when I was trying to find pics.