The TOA Heavy Industries Synthetic Human comes from a manga called Biomega written by Tsutomu Nihei from 2004-2008. I haven't read it, but it must have enough of a fan base to warrant 1/6 scale toys from a new company called 1000toys. The toy is designed and manufactured by Sentinel, but sold under the 1000toys company.

I thought it was very cool looking when I first saw the news about it, but I don't really collect 1/6 scale figures. However I got an email asking if I wanted to check out a sample and I said sure. This was on display at a gallery in California and the gallery was supposed to ship just this one to me and the rest back to Sentinel. However, the gallery made a mistake and sent me ALL of the samples, including an as-yet unreleased figure of Zoichi Kanoe. It was just a prototype though, and I didn't feel comfortable taking it out of the box. I took out my sample and sent the rest off to Sentinel.

As this is a production sample, there is no retail packaging. In fact, if there are any accessories, this didn't come with any. 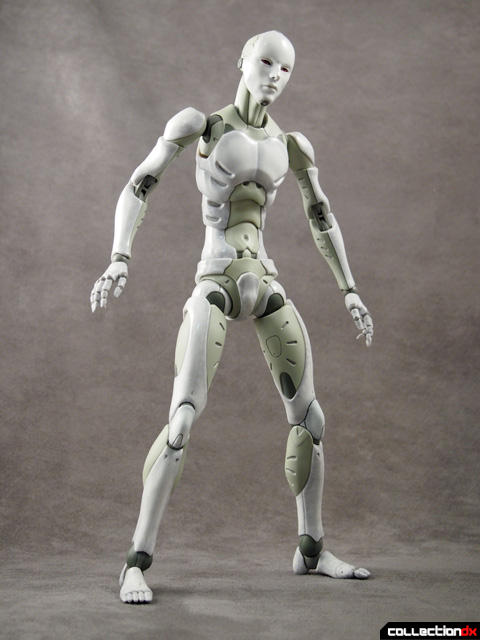 The good news though is that a figure of this caliber really doesn't need anything. Mostly.

Because it is manufactured by Sentinel, the construction is remarkable. It is a joy to hold, and it's perfectly weighted and balanced.

Just look at the damn thing. It's a mix of I-Robot and the android from Bjork's "all is full of love" video. It's a toy that stretches across the uncanny valley. 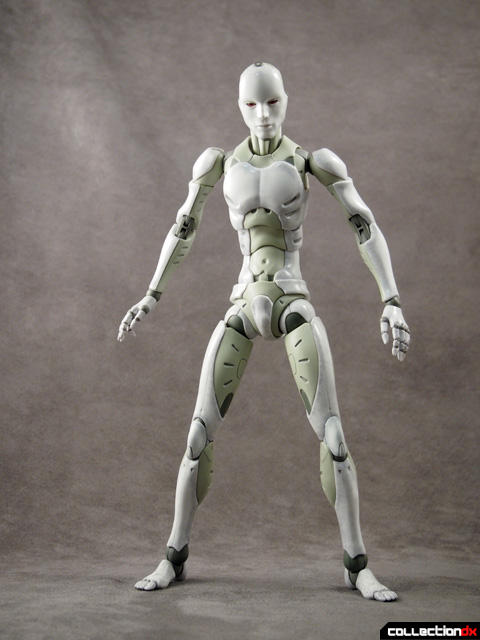 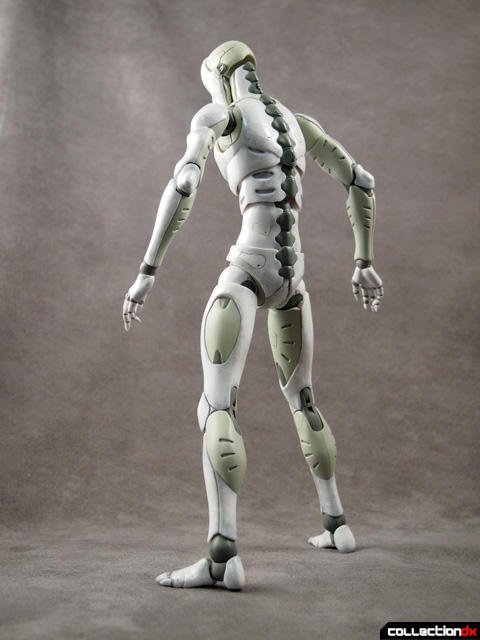 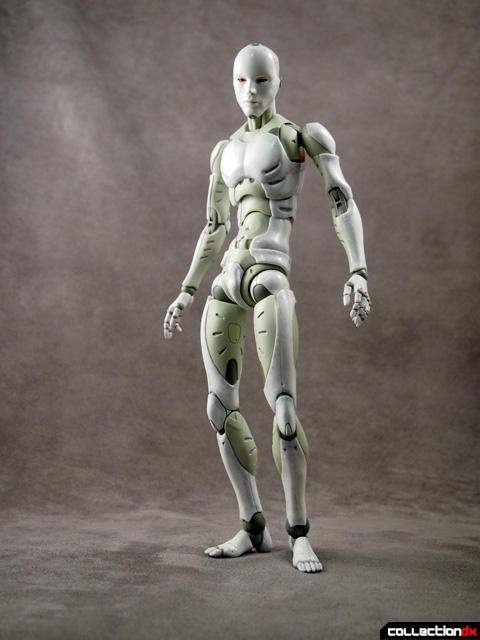 It moves in the most natural of ways. The head is on a ball joint as is the neck. The eyes are independently movable via pegs behind the eye sockets. You need to split the head open and manipulate them from the inside. 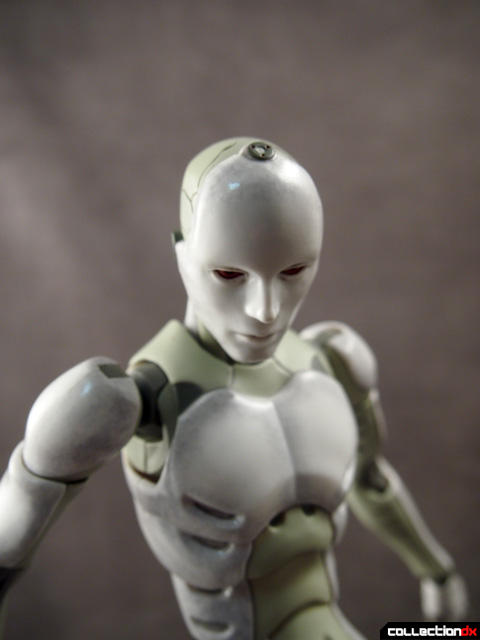 The shoulders have such a lifelike range of motion due to a multi-jointed mechanism. The joints are just tight enough, but there are no clicks to be heard any where in this figure. 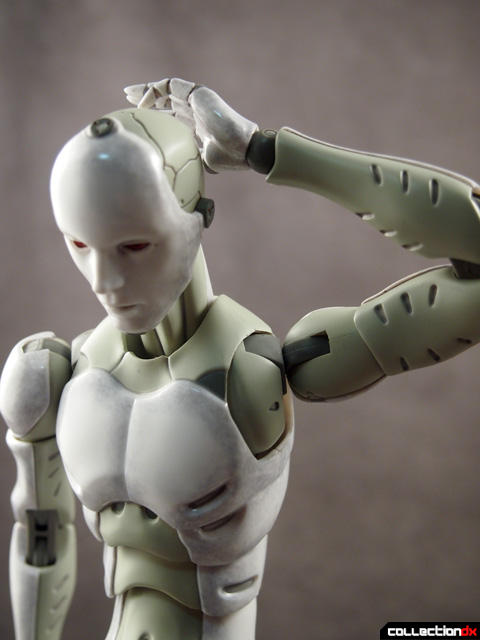 The arms have swivel biceps, double jointed elbows, and ball jointed hands. My sample did not come with variant hands, but this figure could use them to give a wider range of expression. 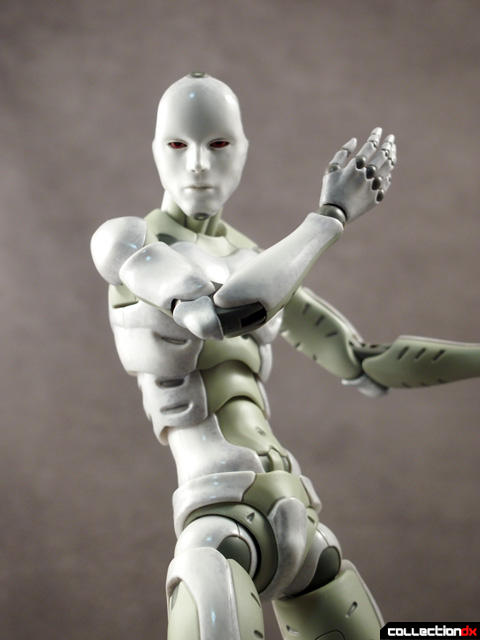 The chest is multi-segmented with ball joints at each connection. When I first started to play with the figure, the top joint did not move, but after a little coercion it freed up. 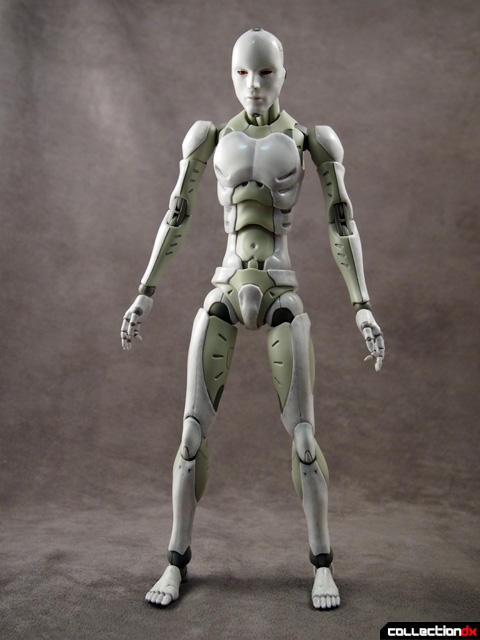 The hips and legs are amazing. They move so naturally yet still manage to look robotic. How many other figures can pull off these poses? 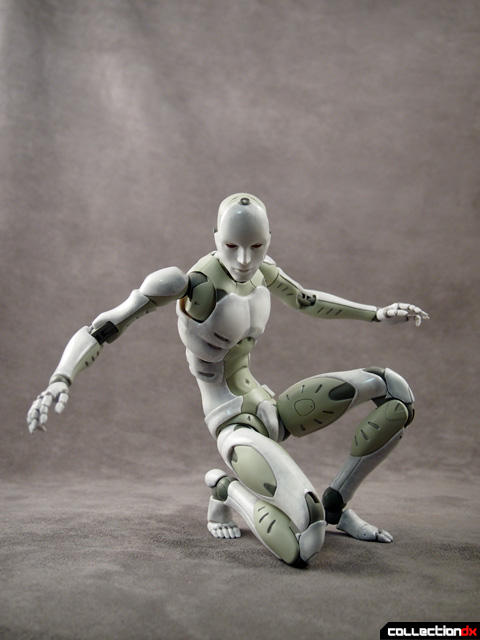 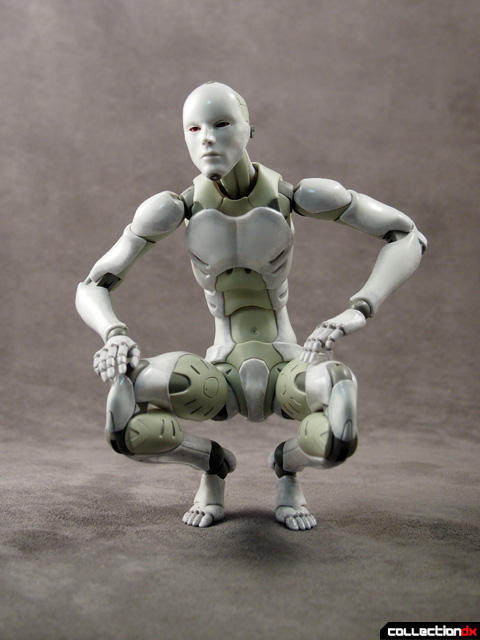 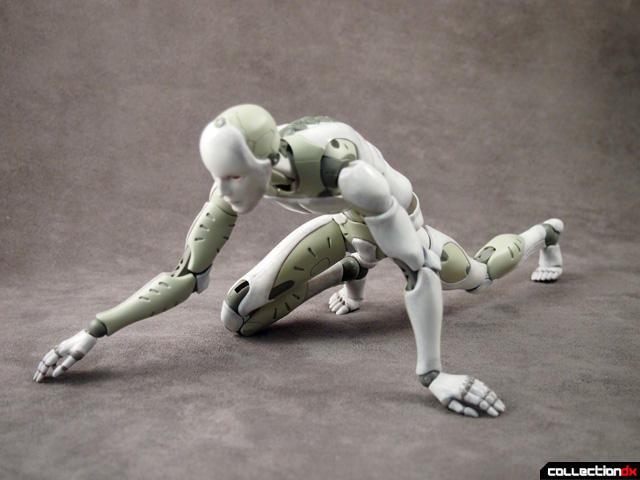 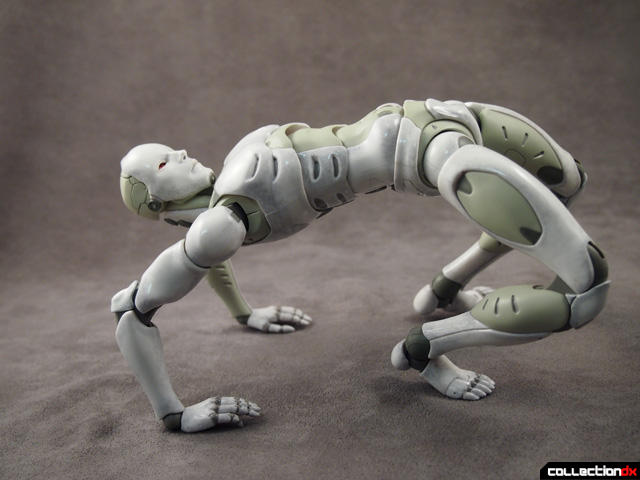 The feet have a swivel and hinge ankle, the front of the foot rotates, and the toes bend. 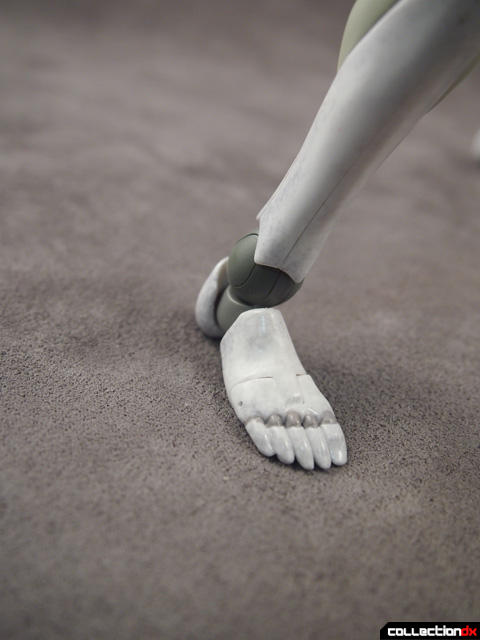 Check out the weathered finish on the white parts. It makes it feel like porcelain. The materials and construction on this piece are astounding. 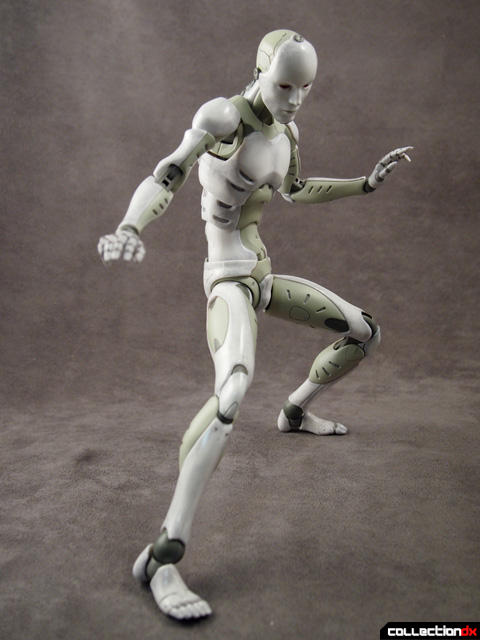 The Synthetic Humanoid hides a secret. Under the faceplate lies a skeletal face guaranteed to give you nightmares. 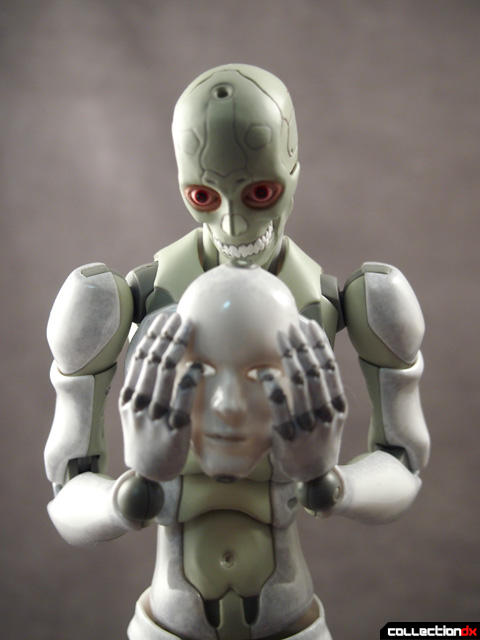 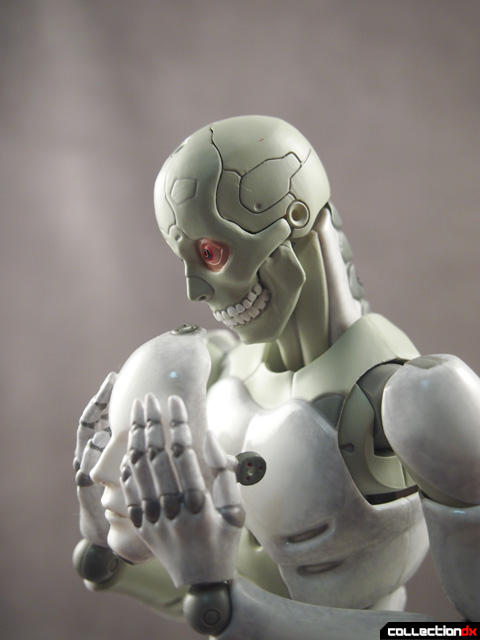 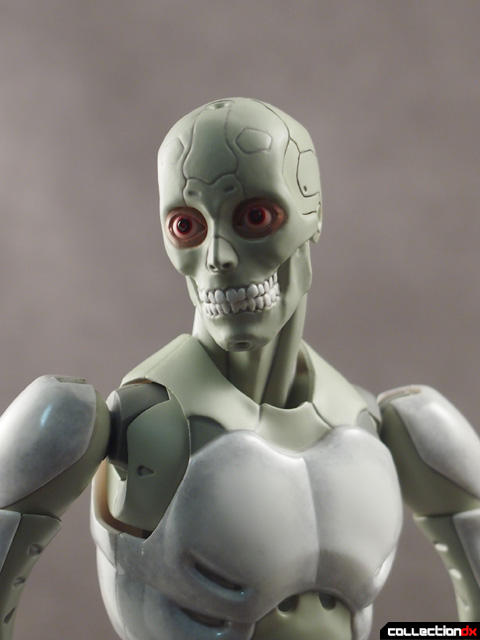 The jaw is articulated, and inside the mouth there is what looks to be some kind of cannon? 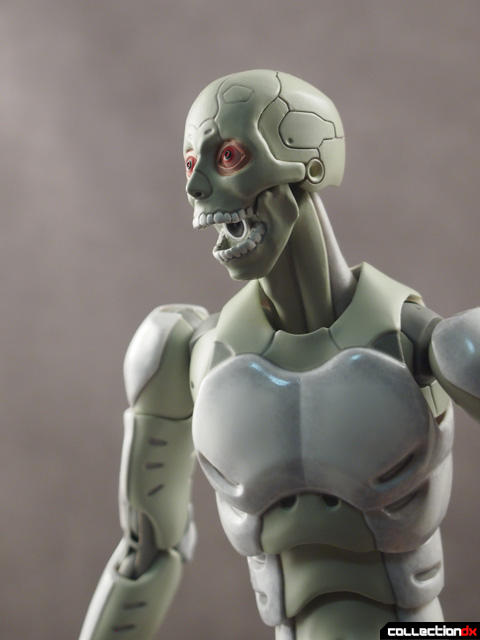 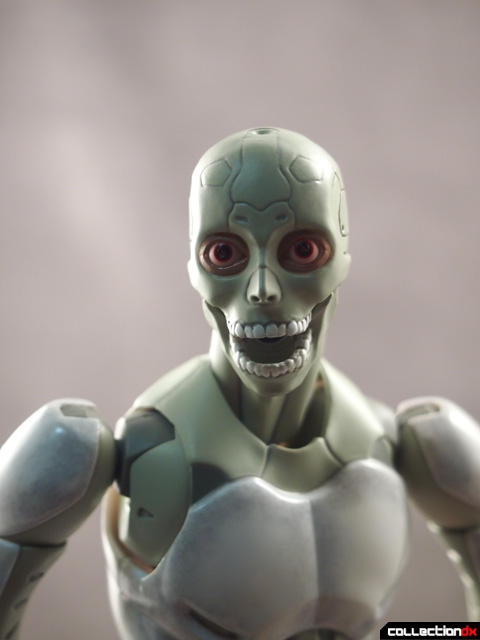 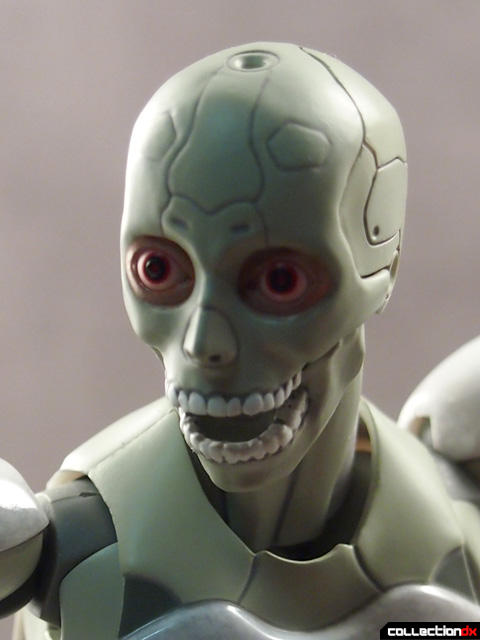 It's sort of like an artists model from hell. 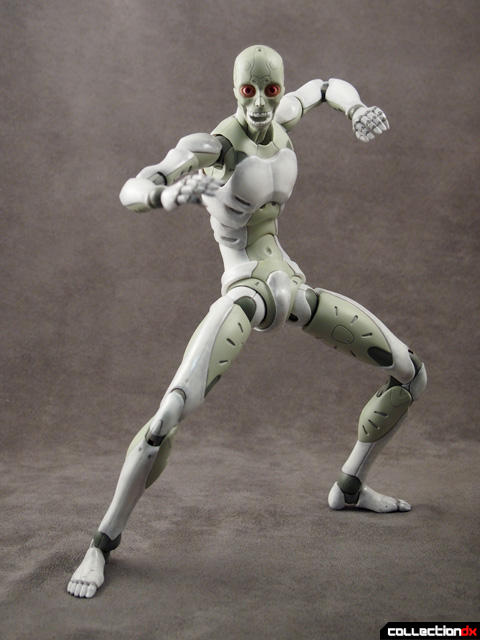 This really could be used as an artist model though. Most 1/6 scale figures have some kind of cloth outfit, or are bulked up with armor. This is a lean machine. Can your figures do this? 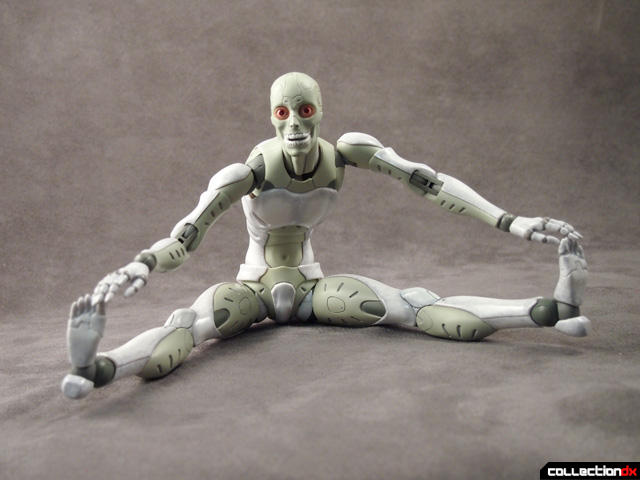 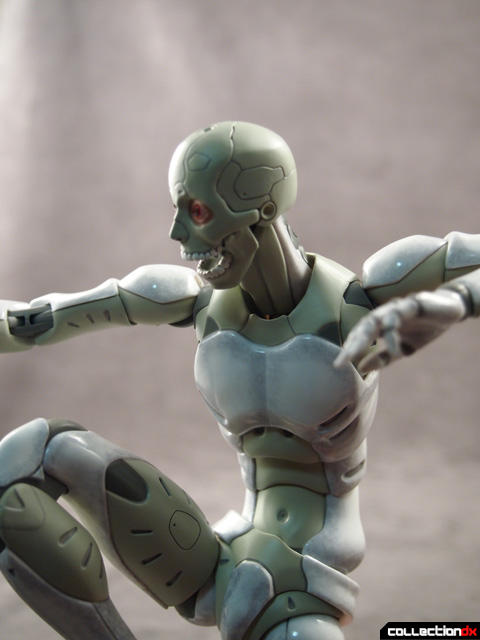 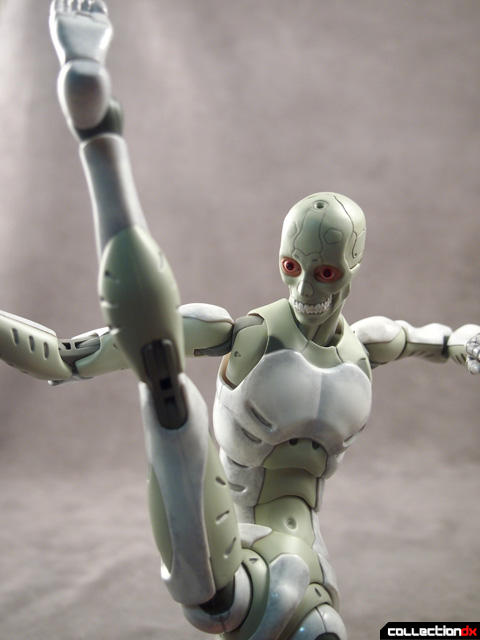 It's just very cool looking. I've had a lot of fun putting this into every conceivable pose and it still looks great. 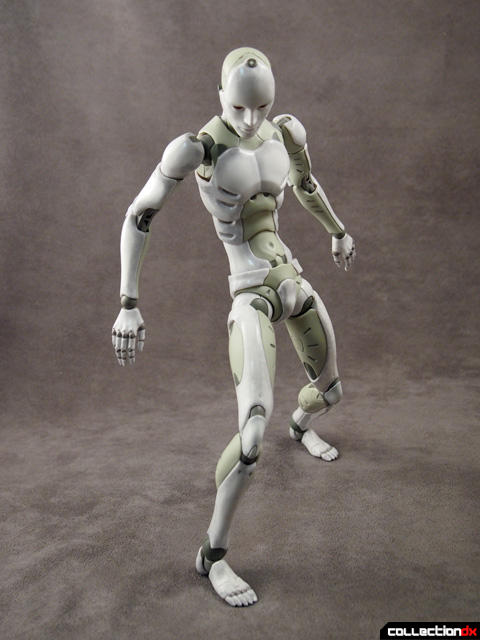 I guess the only downside is the price. At $120 USD it's not cheap, and for that price you would hope it would come with some accessories. Maybe the production versions come with more, but I haven't seen any. That being said, if you can bear the price, the TOA Heavy Industries Synthetic Human is an amazing piece with the most amazing engineering and quality. I really can't speak enough about how nice it is, and I look forward to more releases in the line. 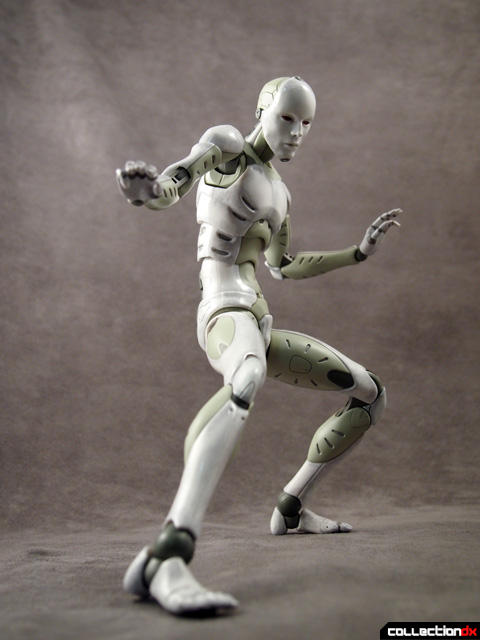 Can't wait for mine to come! The first production batch is supposed to ship over the summer. The final version should come with some more hands.

Anyone interested in picking one up can keep an eye on the TOA Heavy Industries site:
http://toa-1000toys.com/

The first batch is sold out, but they've said they are going to make more, so don't go paying some crazy price on ebay or picking up a bootleg from Taobao.

The 1000Toys guy is pretty active and helpful on Facebook, too, under the 1000Toys name. Good for keeping tabs on new offerings.

I must say that this a very interesting piece to me. It has esthetics that I don't usually see in a toy / figure. It is too creepy for my tastes to keep on shelf, yet I like to watch and study that design a bit. Also it is nice to see something from Nihei. His architecture work (as seen in his mangas) would make for an interesting dioramas or videogame landscape.

This is pretty much as amazing as the promo shots made it look. I'd love to see one alongside that unlicensed 1/6 Rick Deckard.
I wonder if 1000toys is a subsidiary of Sen-Ti-Nel....both of them use '1000' in their names, and Sen-Ti-Nel seems to be pretty big on wordplay.

Boombers have mouth cannons, too!

I think the preview and photos left out the articulating eyeballs.
The level of engineering is astounding on the head alone.

I just checked and it does indeed have articulated eyeballs. The head is VERY DIFFICULT to get open, so much so that I didn't think it did. Be careful! I'll try to update the review tomorrow. Thanks for the heads up!

I think the "cannon" might be some sort of speake or vocalizerr. I think it'd be more reasonable if it was a sonic boom weapon.

OOoohhhh...I want it. I want it beyond all rational thought. Ya know, because I don't collect 12 inchers and that's a lot of money to drop. But...this is one of those cases where the size and price look worth it. Especially with that skeletal face underneath. This is one slick SOB.

I can't wait for this figure to come out. I wish this figure was in 1/12 scale, but i'll take this in 1/16 scale. everything about this figure is phenomenal. awesome review! thank you.

That is one freakishly gorgeous piece!

It's going to be interesting with how they accessorize this figure. Hopefully it will be "Three Laws Compliant" otherwise we're going to have to say "LOOK! There's a Unicorn!" and see if it chases it.

I am actually starting to dread clicking on my CollectionDX link, because it means I'm going to see the thumbnail of this thing's face. I won't be sad when it scrolls off the front page!

Seriously, AMAZINGLY creepy. I love it.