"Ryan is the first Ranger to have no corresponding Super Sentai counterpart. The Titanium Ranger's design is colored in silver/shiny grey starting from a helmet silver with gold stripes. The shape of his helmet is based on a Sentai Ranger team's helmets, with the letter V as the visor which supposed to mean 5 or victory which are 2 of the main things in the Sentai Title. The body is silver with a Y shape going down his stomach in gold. He has white gloves with gold trims, and it goes same with his boots. The suit is believed to be based on the Turboranger suits."

This version of the Titanium Ranger is the newest as of 2014. He is part of the current Super Mega Force line of 5 inch retail figures, which include many red and 6th rangers from past series to coincide with the past rangers (powers) appearing in the current show.
Standard Blister on card back packaging. 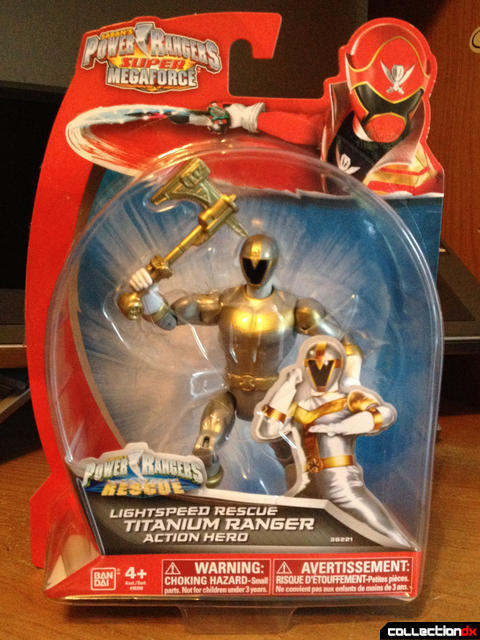 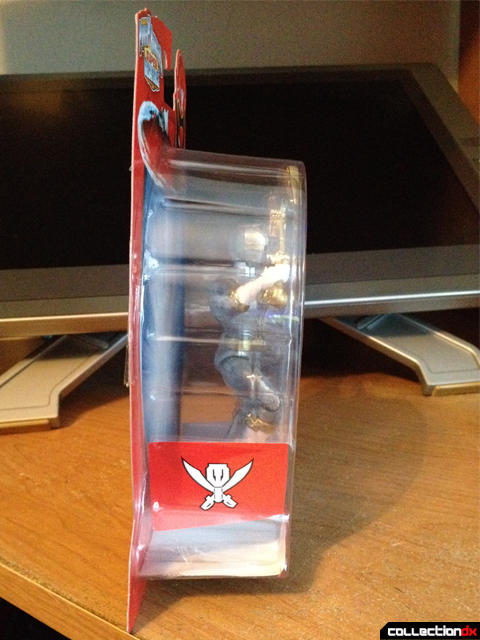 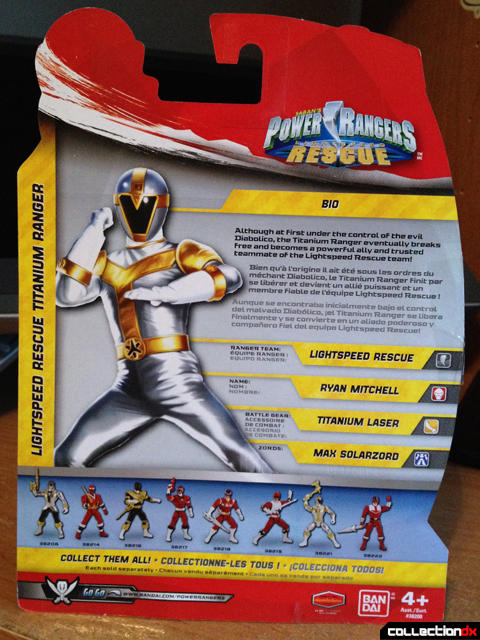 He has 13 points of articulation, and has neat,( if sparse), paint applications. He's a bit more muscular than he should be, but not the hulking roid-rager many past Power Ranger figures have been. I originally thought it would be cool to takes pictures of him in front of a silver backdrop, then realized that would be problematic, and switched to black for more contrast. 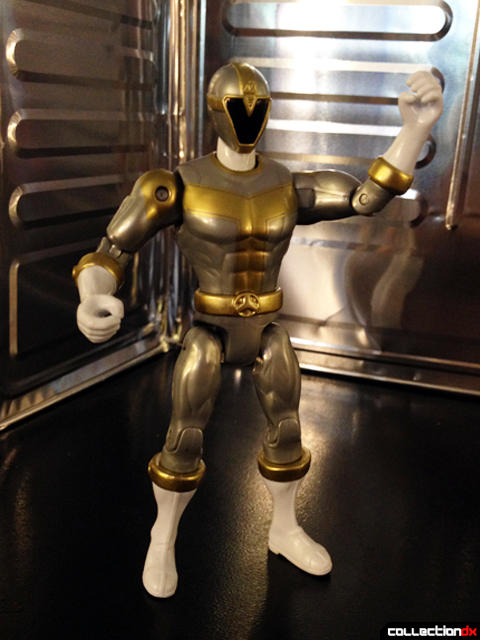 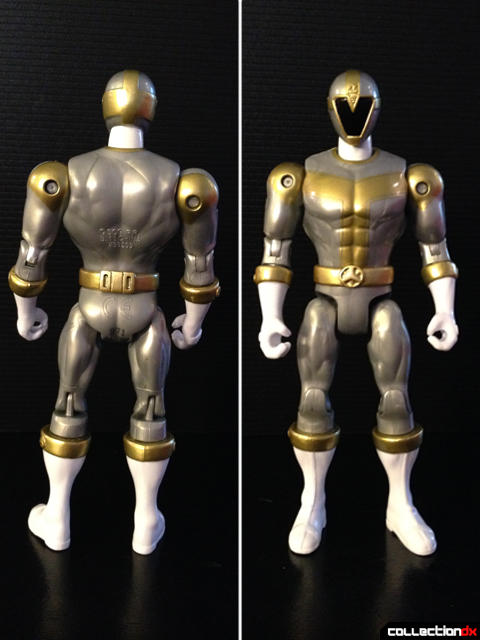 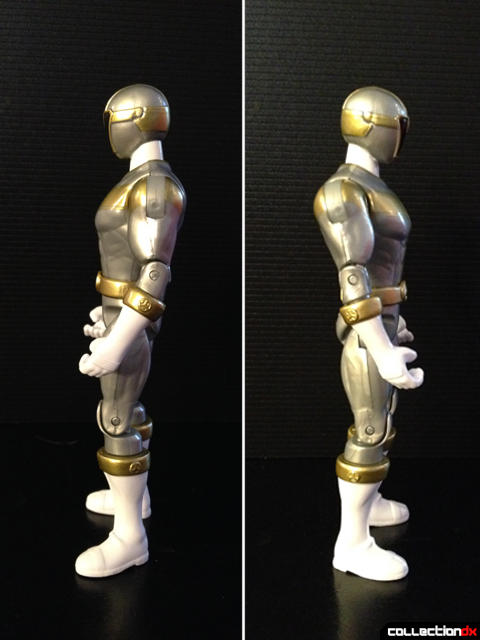 You can get him in most basic poses, and would be totally satisfactory a kid for playing with him I'm sure. As an adult collector the one missing joint that would make all the difference to me is the waist swivel. 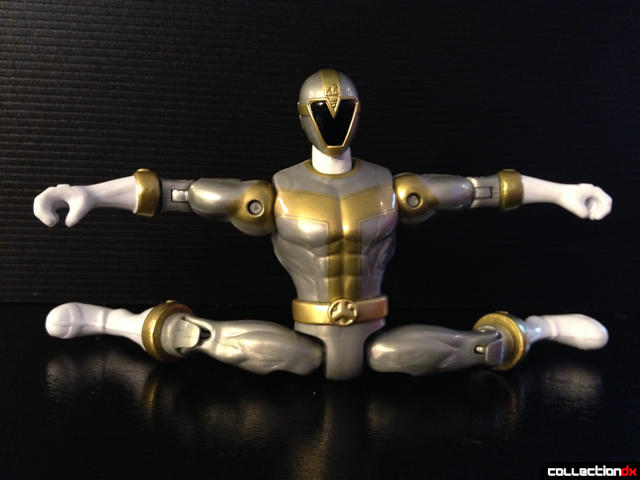 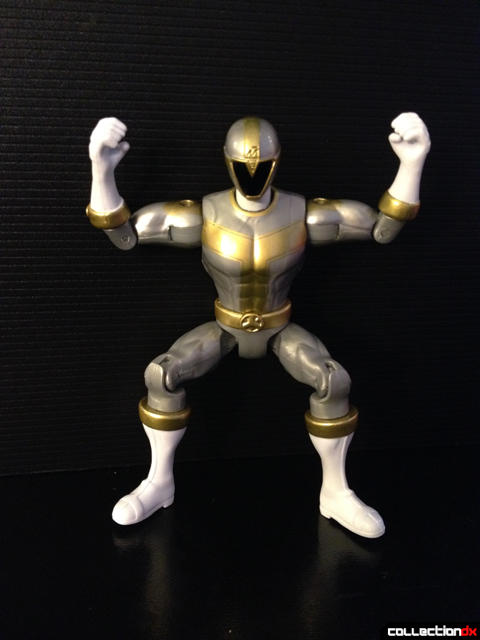 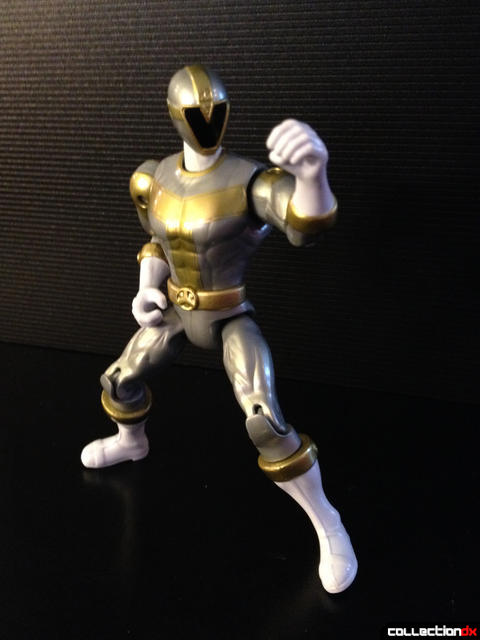 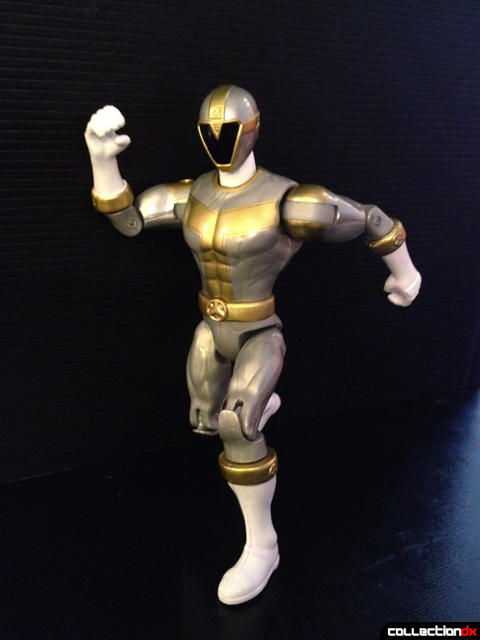 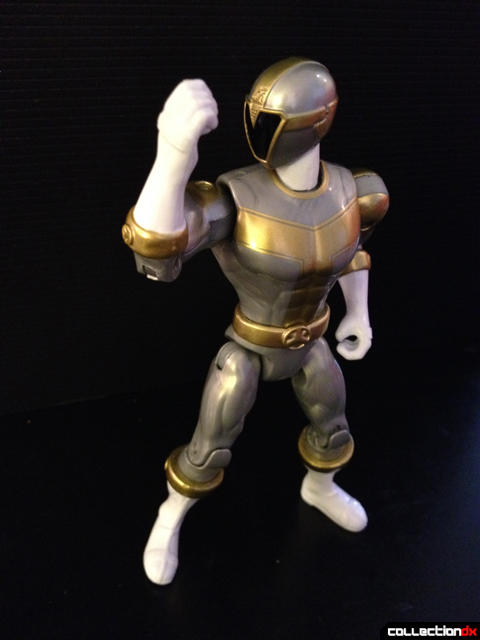 He is mostly re-purposed parts. Seems like only the head and pelvis/belt are new tooling.
I wish the belt had some blue on the insignia. I may take a paint marker to that eventually. 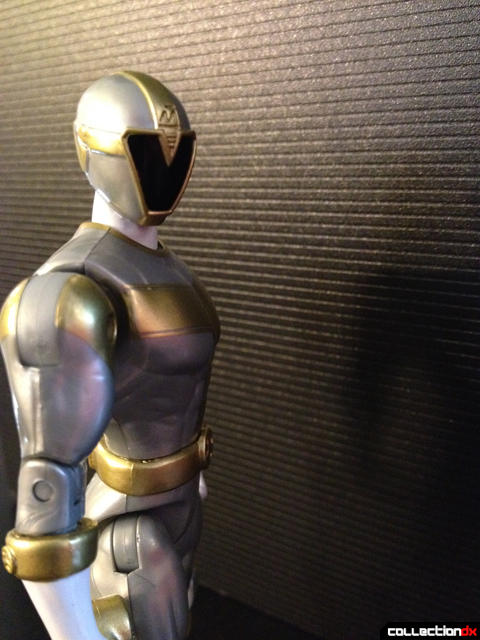 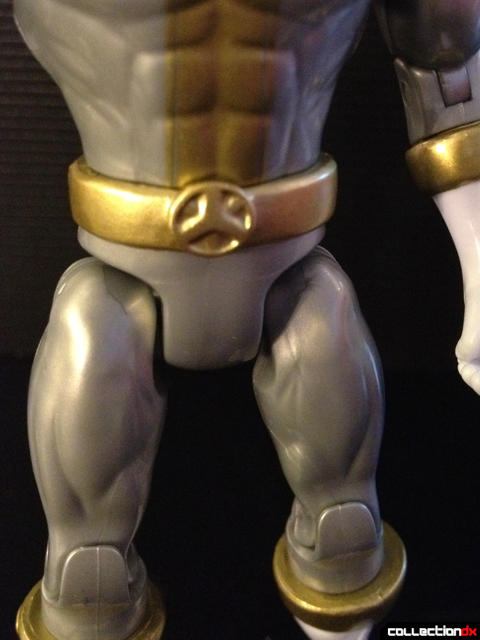 I took a .01 Pigmamocron to mine to try and get the head emblem to pop a bit more like it did in the show. One good thing about a $10.00 figure, I don't think twice about "defacing" in this way. I considered adding the missing black lines along his chest design as well, but quit while I was ahead. 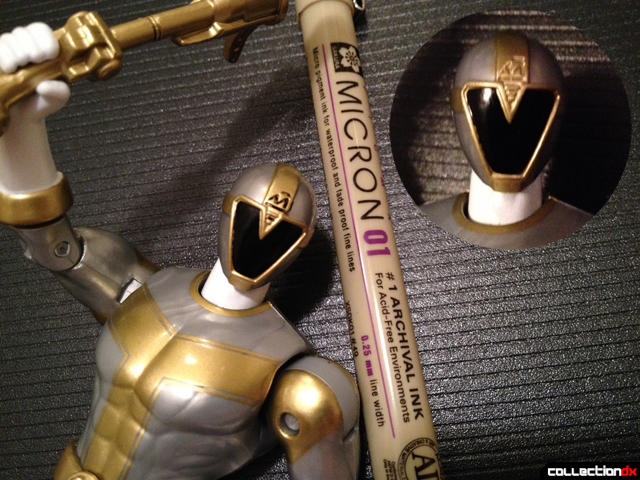 Something I couldn't so easily fix, and didn't really notice till I opened him up was the lack of shoulder pads. The paint apps sort of try to indicate them, but they are just bare shoulders. I believe this is the forth version of this character, but the first to exclude the pads. 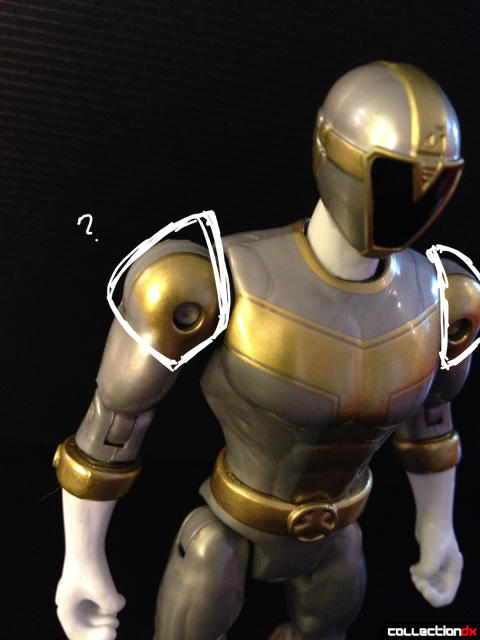 He is actually a bit taller than the red SPD Ranger I have from the same line. The legs are longer but not the rest. I think the longer legs make him look less squat and cartoony. it's a little odd though that now he doesn't really match the style within a line. 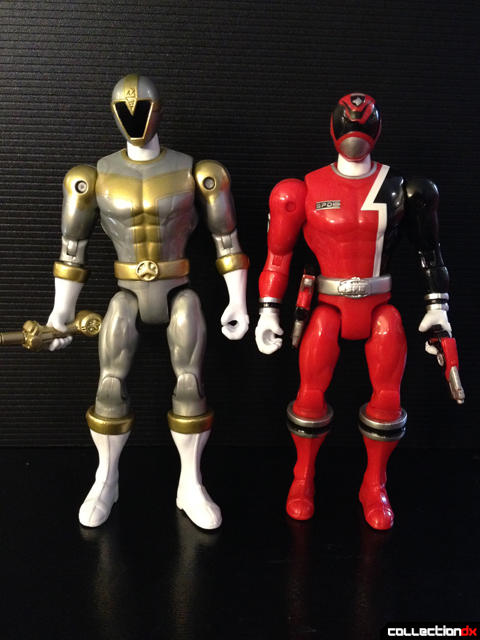 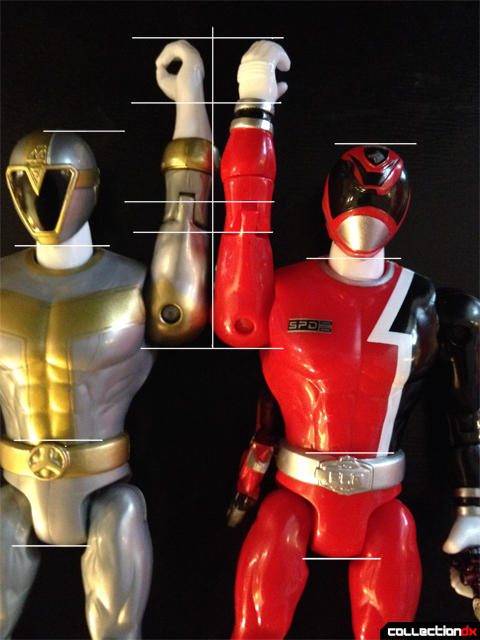 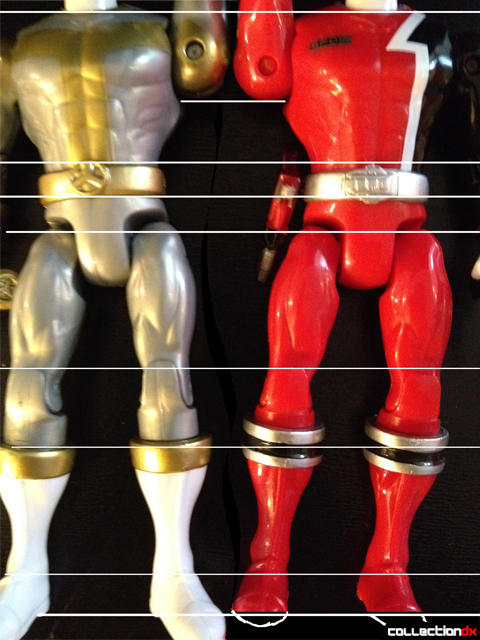 The only accessory he comes with is the Titanium Laser in Axe Mode. It's molded all one color,(gold), and is soft plastic. I would have preferred it in silver I think, but gold is OK too if we can only have one color. 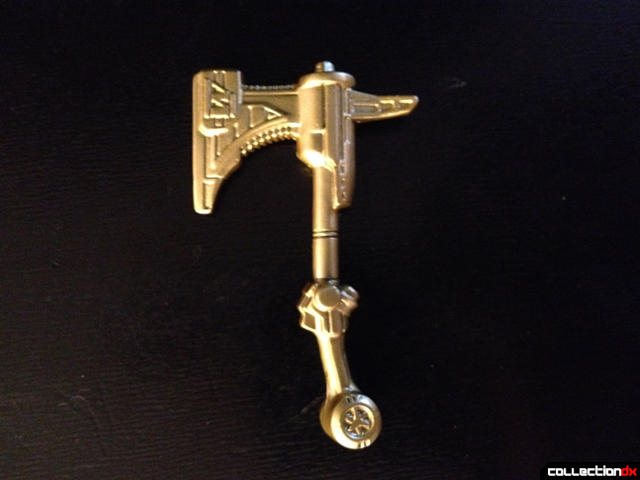 Past versions have come with the Titanium Laser Gun Mode as well. It seems a shame they skipped it this time, still I did like posing him with the axe. 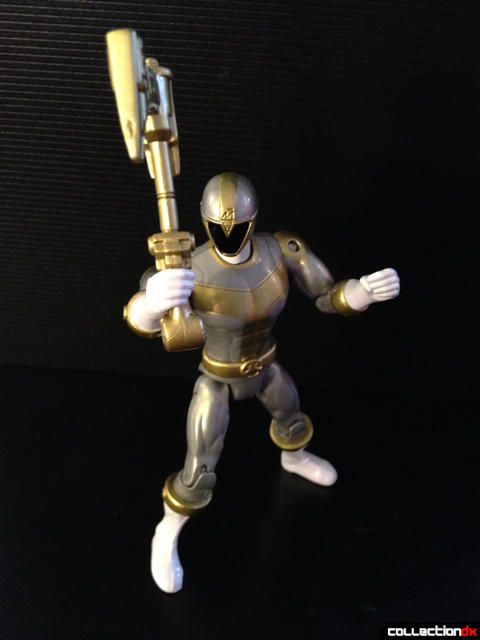 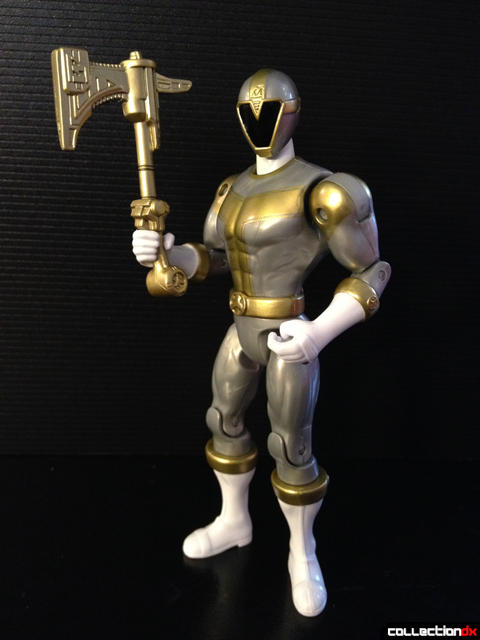 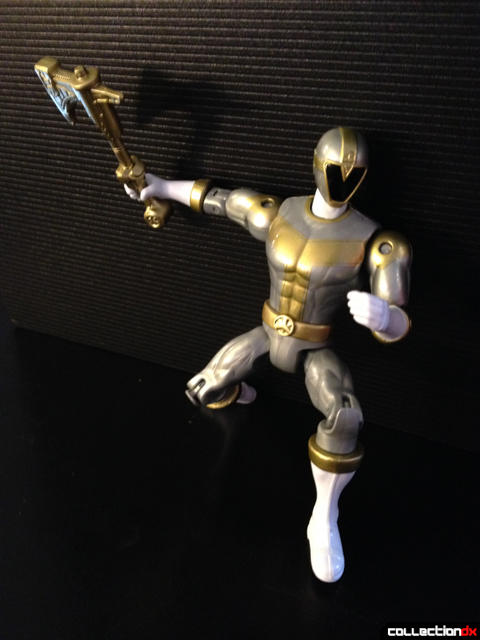 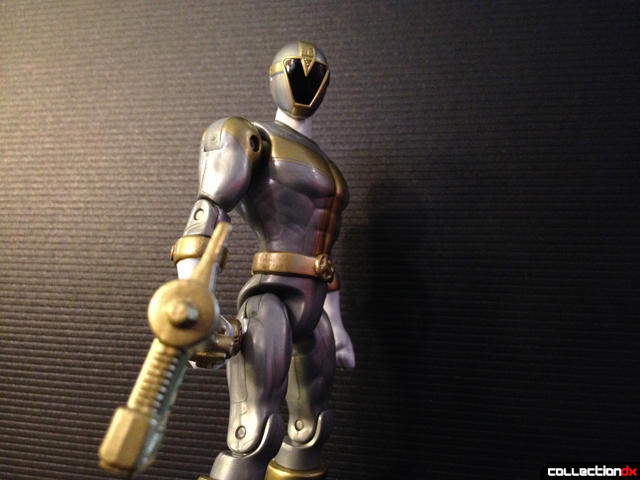 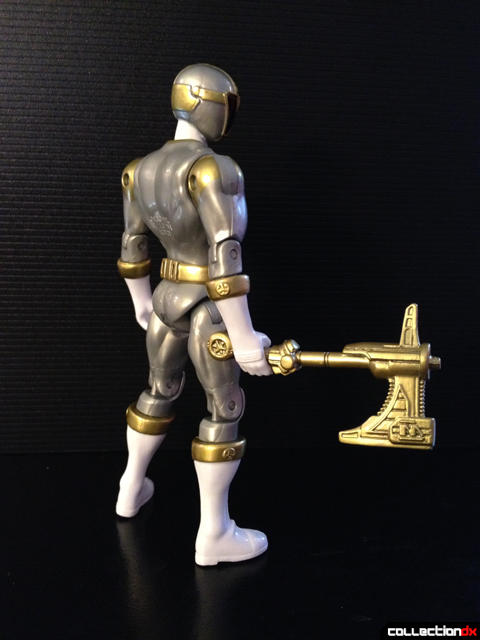 He feels sort of slippery or waxy all over I'm guessing it's the silvery plastic he's made of. It's not terrible just an odd texture on a brand new toy. The gold paint is nice and metallic, but it doesn't really pop, and the chest design blends in to the silver too much. if they darkened either the silver or the gold it would have helped make them stand apart more. As a comparison of gold tones, here he is next to my SH Figurarts Gold Ranger/Shinken Gold. Pictures taken from certain angles, the sizes can almost appear to match, but on your shelf the height difference will be super obvious. 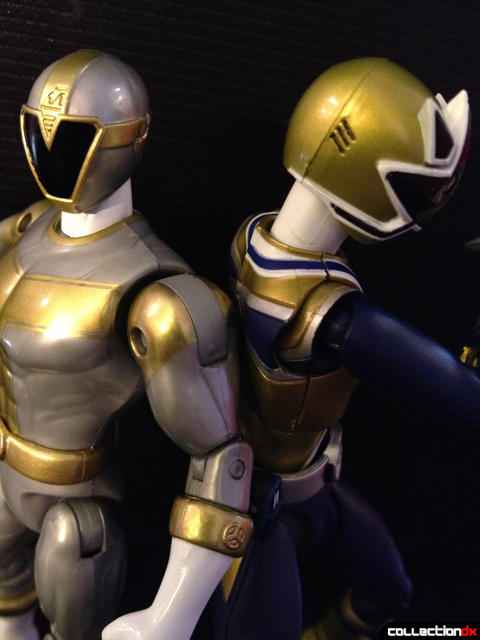 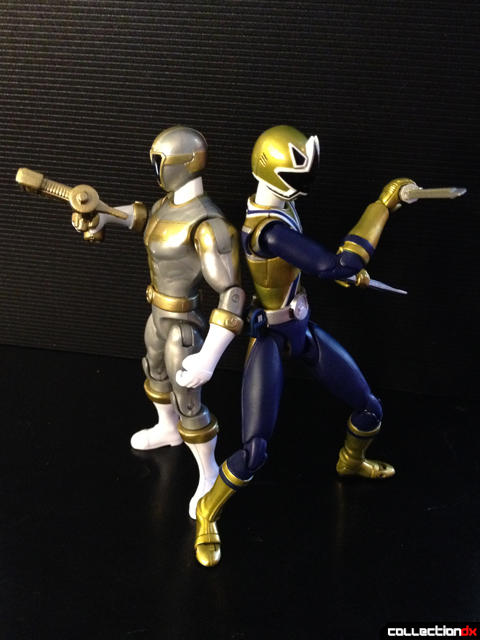 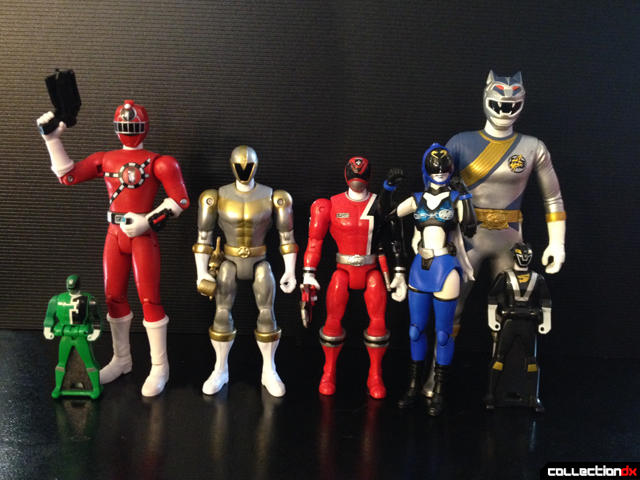 Here his is on display with my other PR/Sentai stuff. 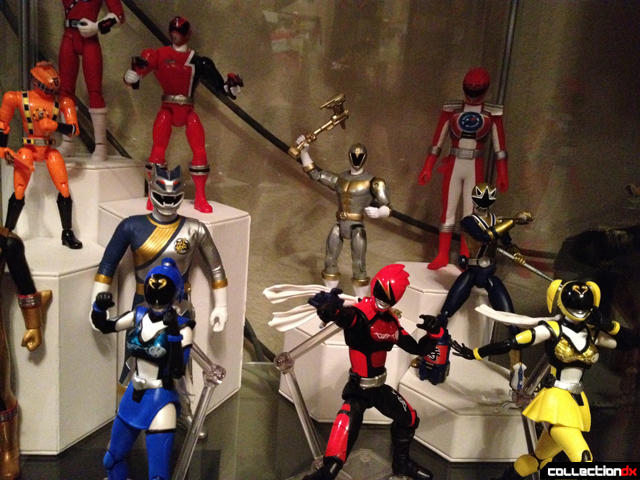 Overall, he's a $10.00 figure and he's a decent $10.00 figure. You get your money's worth, but not a penny more. I would not pay over retail for him, but don't regret buying him. Perfect for a kid, or a collector on a budget. I don't think I'll get any more in the is line. I got the SPD Red as a test to see if I wanted to stock up on old rangers being released in this line. But I was a bit disappointed. I mainly got the Titanium Ranger, because I am a sucker for US only Power Rangers stuff. I also know he will never get a good Figurarts release.

Less squat than others in the line

US only release character

Doesn't match body style of the other rangers in the line.

Seems to me to be the second best version of thus character, with the "Power Rangers Super Legends" version being the best. However prices for that on Amazon and Ebay range from 30-60 right now (November 2014) So unless you are a die hard Titanium fan, this is probably your best bet. 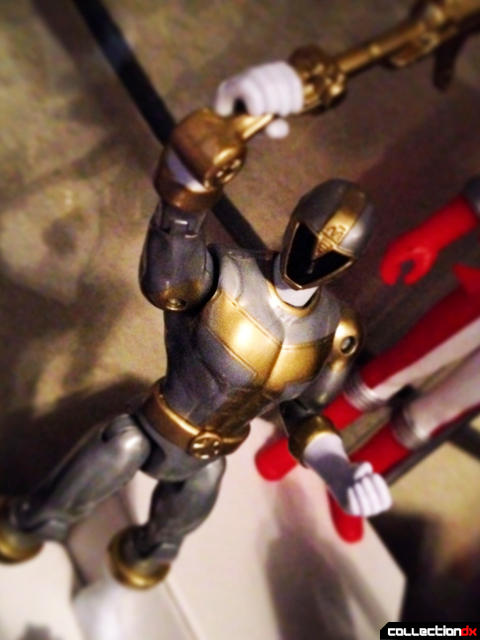 I'm seriously addicted to these Rangers, recently. I passed this guy up the first time I saw him, but I won't when I get a second shot.

Yeah, I can see that. I have struggled with not collecting them all as well. If I didn't have any figures from other series lines already I probably wouldn't be able to resist.