"The Tingler" was a 1959 movie directed by the legendary William Castle and might be the best example of why I love good old gimmicky 1950s horror and sci-fi movies. They just don't make them like this anymore* and you certainly never see such an effort to get the audience involved like Castle did with "The Tingler".

In the movie, Vincent Price plays a scientist who discovers that the strange tingling sensation that you feel when you are frightened is actually caused by a parasite that grows at the base of your spine. The more frightened you are, the bigger it gets. Screaming relieves the fear and destroys the Tingler. But...what if you can't scream? A mute character in the film actually dies from fright and the Tingler is removed by Price and is shown to be a centipede-like monster. 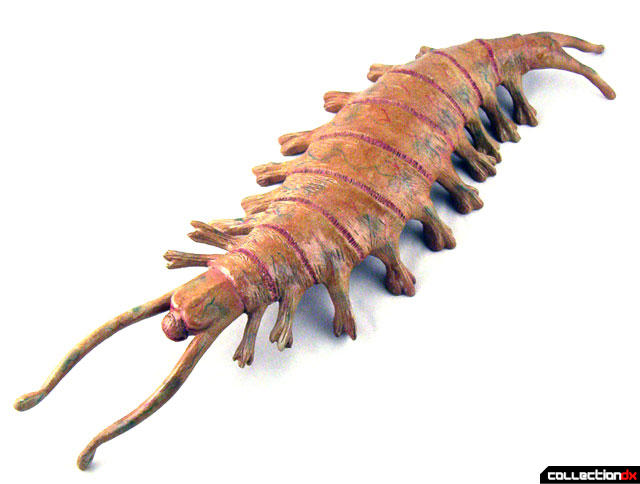 Now, as if this isn't hokey and preposterous enough, William Castle had to make the movie even more entertaining by introducing "Percepto" to theater audiences. From Wikipedia:

"For "Percepto!" William Castle attached electrical "buzzers" to the underside of several seats in the auditorium. The buzzers were small surplus vibrators left over from World War II. They had been installed inside the wings of air craft and when activated would vibrate to help de-ice the wings by shaking and cracking the ice. The cost of this equipment added $250,000 to the film's budget. It was predominantly used in the larger theaters.

During the climax of the film, the Tingler escaped into a movie theater. On screen the projected film appeared to break as the silhouette of the tingler moved across the projection beam. The film went black, all lights in the auditorium were turned off and Vincent Price's voice warned the audience "The Tingler is loose in THIS theater! Scream! Scream for your lives!" This cued the theatre projectionist to activate the buzzers and give several audience members an unexpected jolt.

An alternate warning was recorded for Drive-in Theatres, this warning advised the audience the tingler was loose in the drive in. Vincent Price's voice was not used for the Drive-in version."

A friend of mine says that the drive-in version tells you to honk your horn or flash your lights in place of, or in addition to screaming. I have seen this movie at a drive-in, but it was the regular theatrical cut with Vincent Price's announcement.

So, now that you know something about the movie, we can move on to this release of the monster itself. The Tingler was originally released in 2004, but the version I have here is the 2007 second edition. Strangely, the "T" in Tingler is replaced with a "?" on the underside of the Tingler. It comes in a large box with a clear window on the front through which you can see the Tingler inside. The Tingler rests in styrofoam, which is fine, but I wish that there wasn't a large piece of styrofoam going right down the middle of the display.

The front of the box actually lifts up so that you don't have to slide the entire styrofoam tray out of the end to remove the creature. One end of the box shows Price along with a reproduction of the death certificate shown in the above trailer. 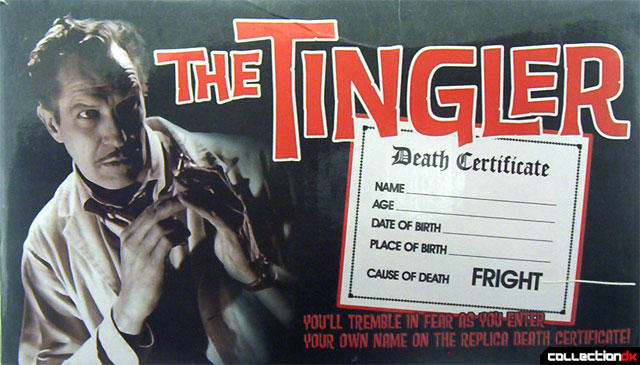 The Tingler itself is a fixed pose resin statue measuring about 21" long and about 6.5" wide. So it's a significant piece to add to your monster collection, in terms of size. 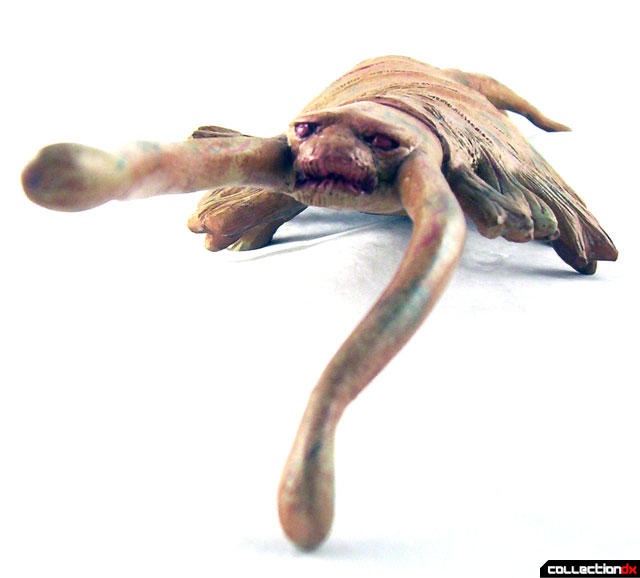 I'm not a big fan of resin statues, but I'm really glad to have a Tingler to display. The only gripe I have at all with it is that it appears that on mine the antennae were actually broken off and glued back on before the toy was packaged. I didn't bother to send it back since it's not a huge deal to me. You really can't tell without close inspection, but I think that sort of thing just doesn't reflect well on Ultratumba Productions, who made this. I don't ever plan to re-sell this, but I suspect that if I do, I'll have a hard time convincing my potential buyer that it came that way out of the box. C'est la vie.

* (Then again, maybe they do. There's been reports of, you guessed it, a remake being made.) 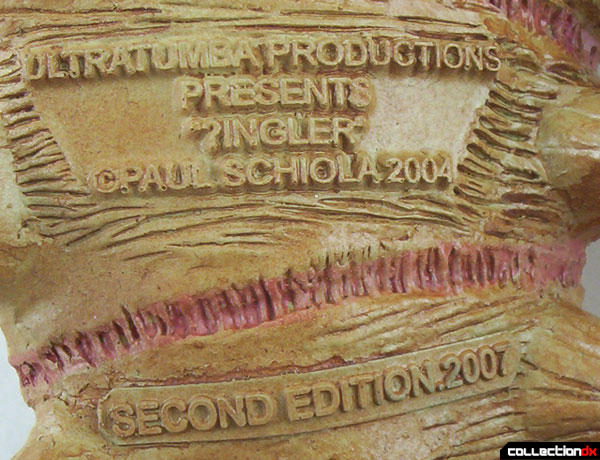 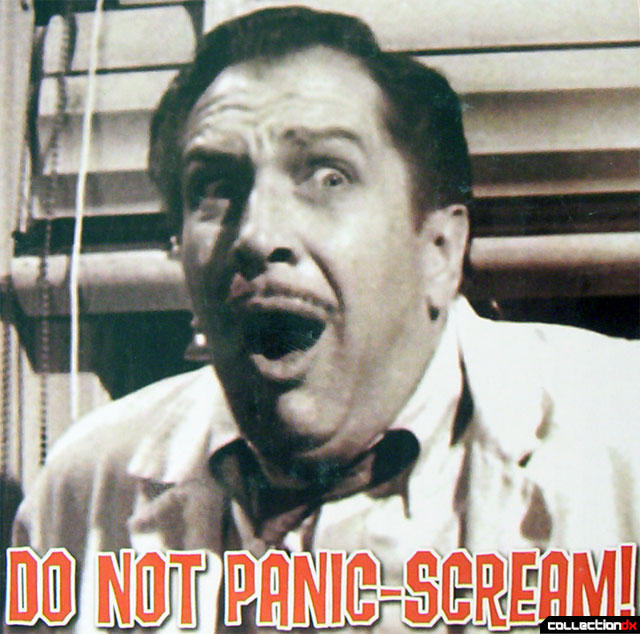 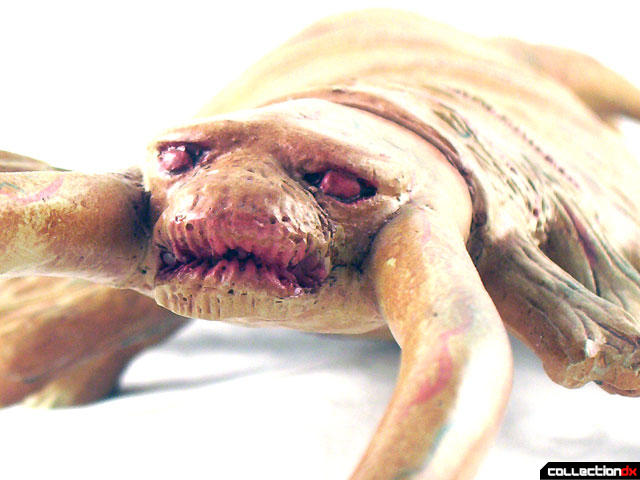 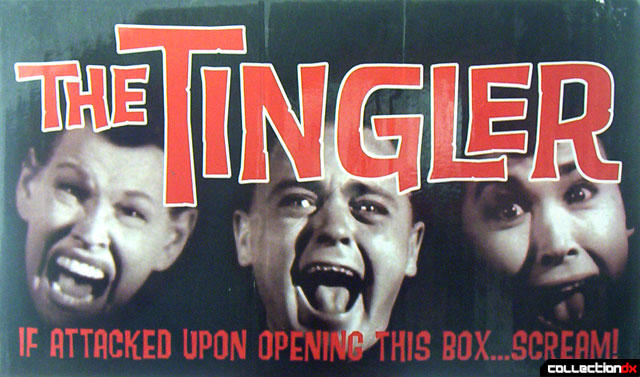 Thanks, Atom. I can't see how anyone wouldn't get a kick out of William Castle. Hell, in one of those clips there you can practically see him stifling a laugh himself. One thing I meant to mention in the review, but forgot, was how cool his autobiography, "Step Right Up! I'm Gonna Scare The Pants Off America", is. A little slow at first, but once he hits his stride, it's a real fun read.

Just got done talking to a buddy of mine who has the first version of this. Apparently, that one came in a much more generic looking box. Also, it's been awhile since I'd seen the movie, but he reminds me that it originally did not have that face. That was added by the sculptor, Paul Schiola.