Incubot Productions has been quietly chugging along since the great success of their initial releases of the Series 1 Nekobot USBs and Cyrstal Nekosaur Sofubi, preparing to unleash an onslaught of surprises in 2010. Fortunately, we are into 2010 now, and some of those surprises are coming to light. Incubot Productions has teamed up with geek-goods website Think Geek to produce a new version of the long sold out Stealth Nekobot release, available here! 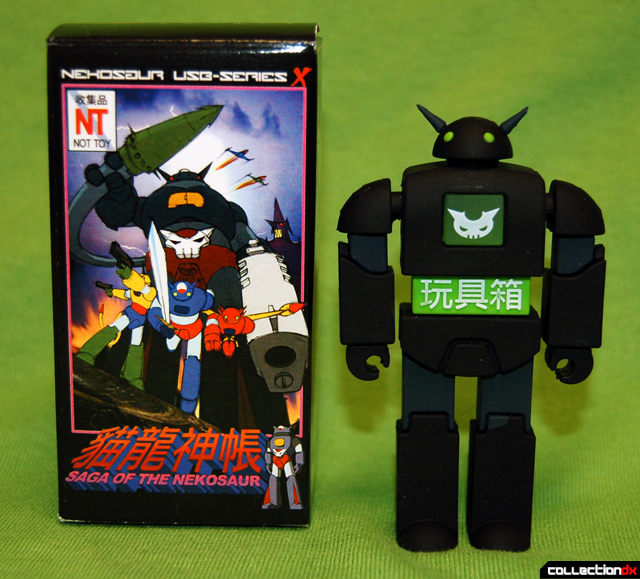 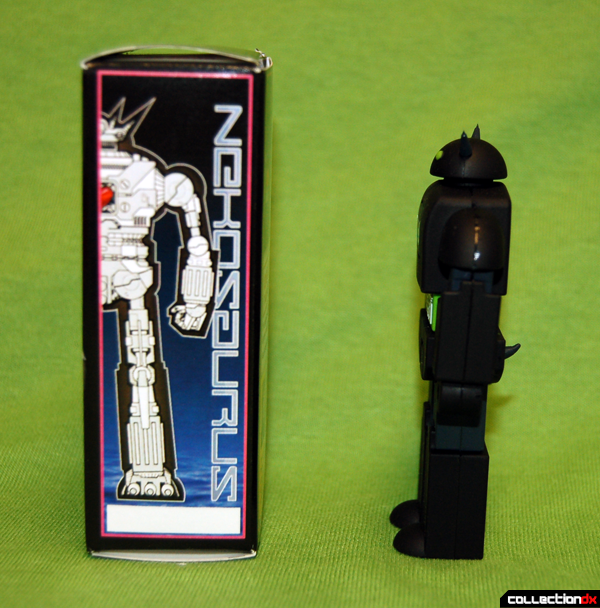 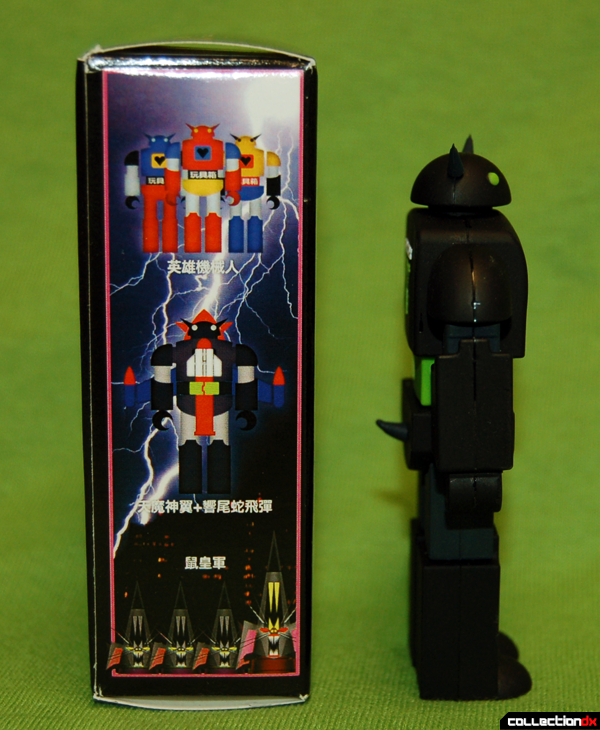 The new Think Geek colored Stealth Neko is cast in dark grey and darker grey rubber, with neon green details. Before we get to the toy in-depth, we’re going to talk about the awesome packaging, which was not ready for the Series 1 review. Each Nekobot USB comes in a sturdy color-printed box dripping with vintage vibes and gorgeous art: 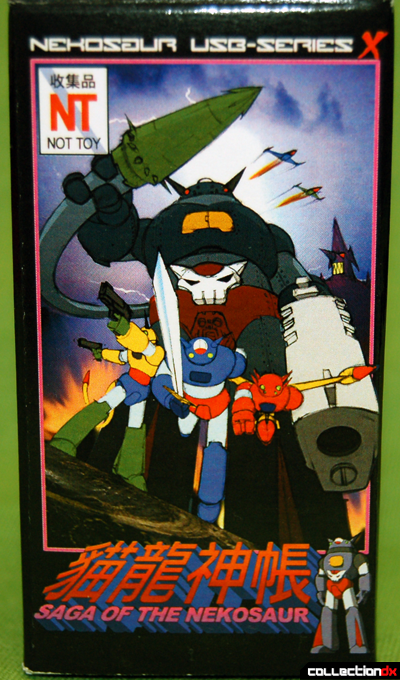 The “Saga of the Nekosaur” art on the front is AWESOME, and looks straight out of a vintage animation cell. Pay extra attention to the faux-Engrish on the back of the box, describing the Nekosaur story, and the figure’s features. 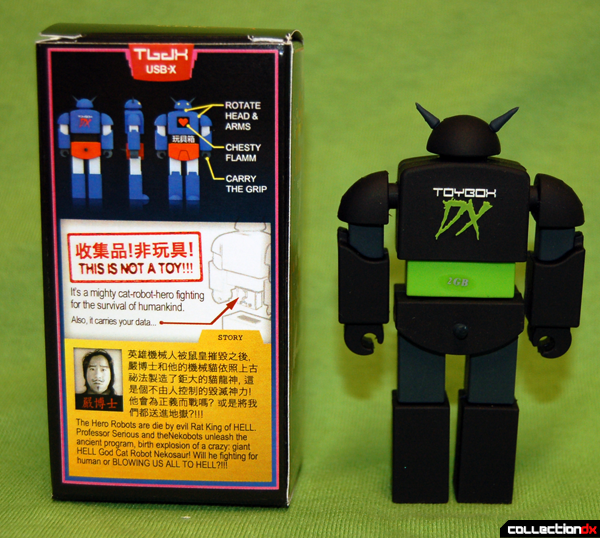 I especially like “Carry the grip”, and “Chesty flamm” sounds German.

The new Neko release also comes with a new Catalog pamphlet, showing both the previous release, as well as announcing some new upcoming figures! Regular version and Stealth Neko offered to help with these announcements: 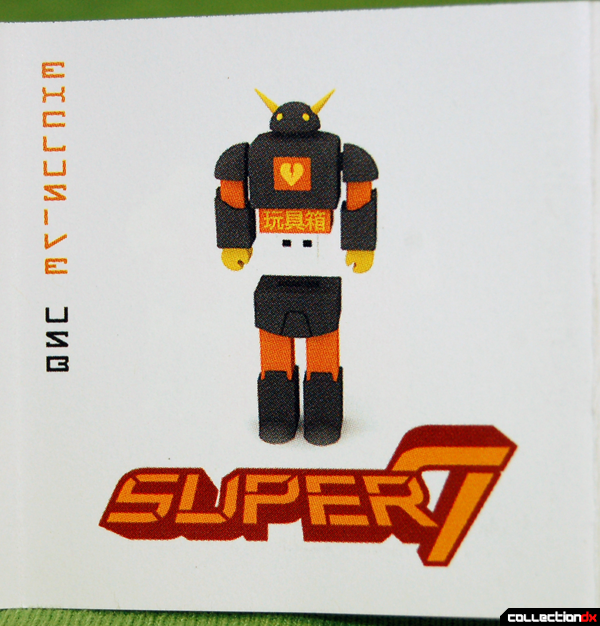 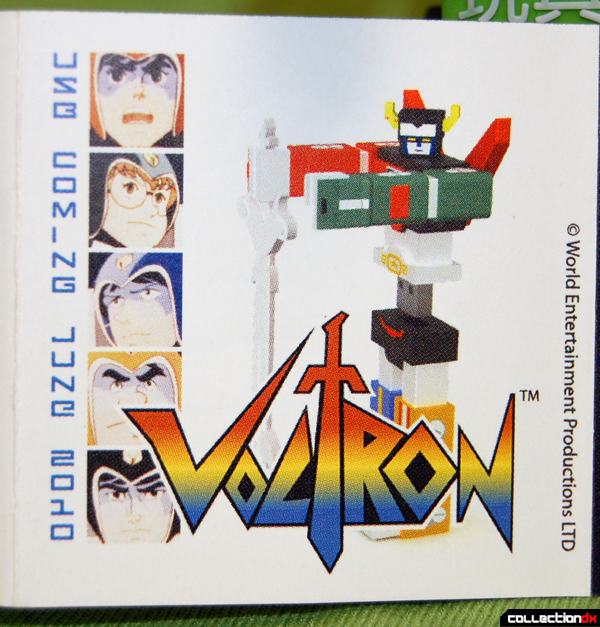 I’ll be picking up a Super7 collaboration version for sure, because it looks fantastic. The other big piece of news here is the mac-daddy of vintage robot licenses, VOLTRON! Incubot Productions is making an adorable blocky rubber USB figure of everyone’s favorite penta-lion’d defender of freedom, and it looks great!

Now, onto the figure proper! Sanjeev already extensively covered the sculpt and features in his earlier Series 1 review, but it never hurts to be thorough. 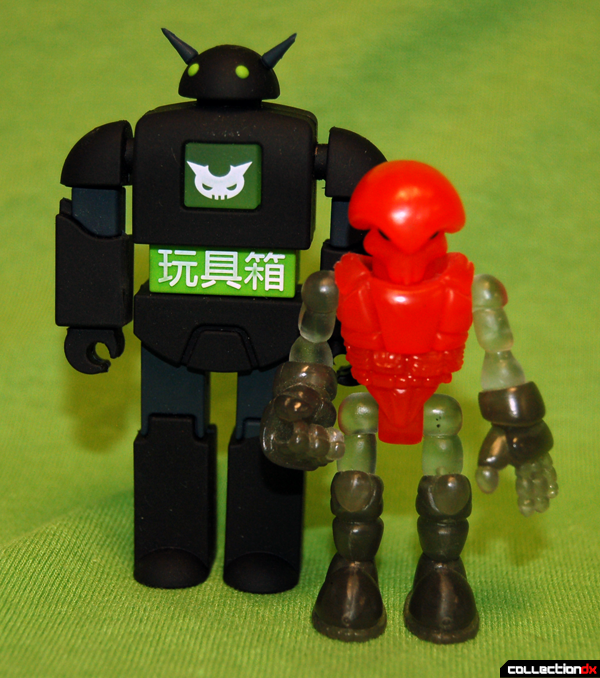 Nekobot stands two and a bit inches tall (standing next to the ubiquitous Onell Phase Pheyden), and is made from durable soft rubber with a sweet matte finish. He is articulated at the shoulders and neck, and just feels ‘right’ in your hand. 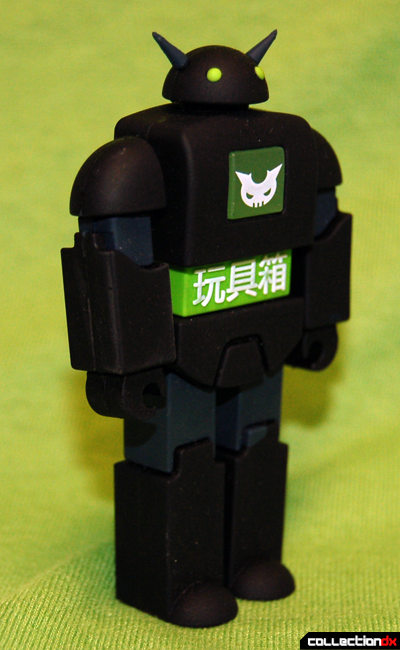 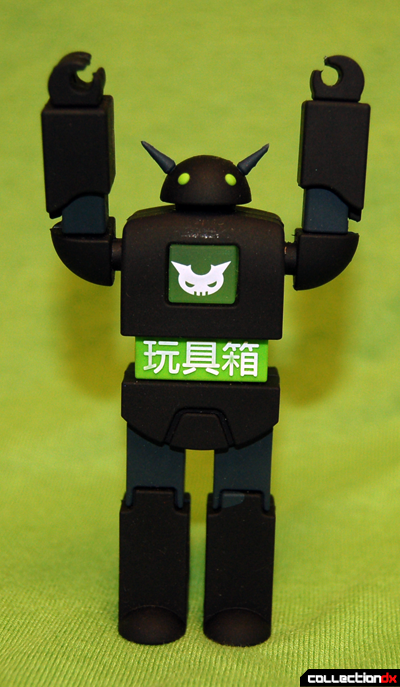 The main colors are all molded, and the figure somehow assembled so that it feels indestructible (there is a coloring flaw on the left knee of my review sample, which is why it was sent to me as a review sample from the limited run, rather than released into the wild). The eyes are painted details, and the belly lettering (a nod to vintage robots with waist stickers emblazoned with their names, in case they forget), ToyboxDX logo on the back, and chest emblem all appear to be printed on, with raised details. All of the printing is razor sharp and flawless. 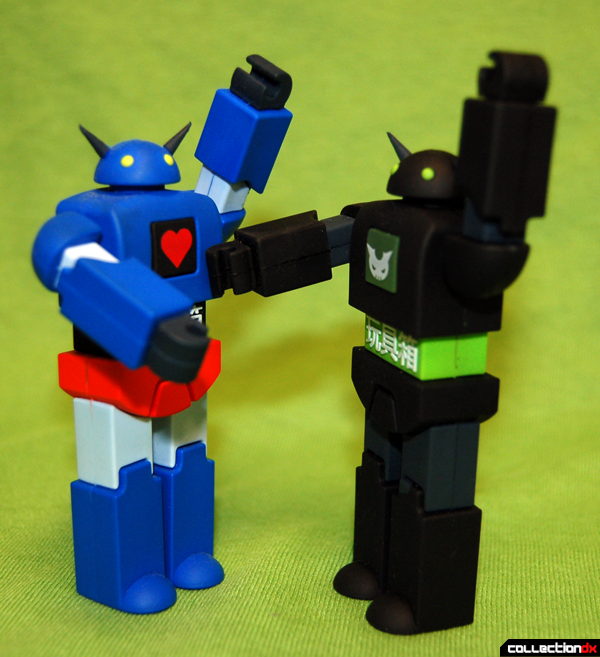 Nekobots hold a hidden surprise in their bellies: a 2GB USB flash drive! The figure pulls apart at the waist, and the flash drive is mounted in the top half. The chest emblem lights up when plugged into a computer. 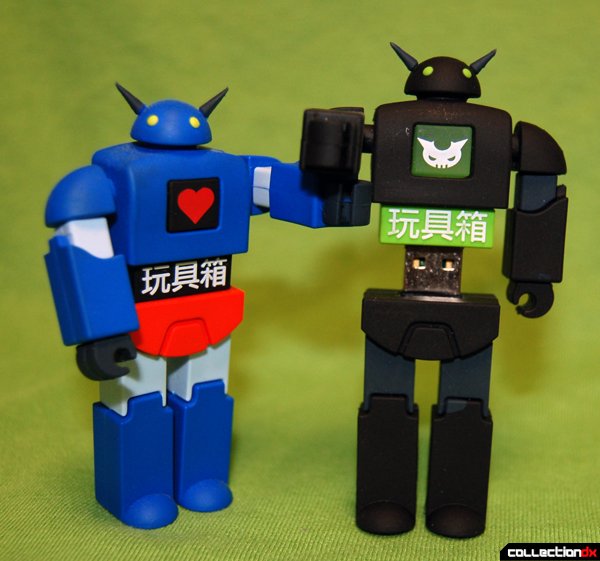 Nekobot oozes with vintage funk, and looks great among his brethren: 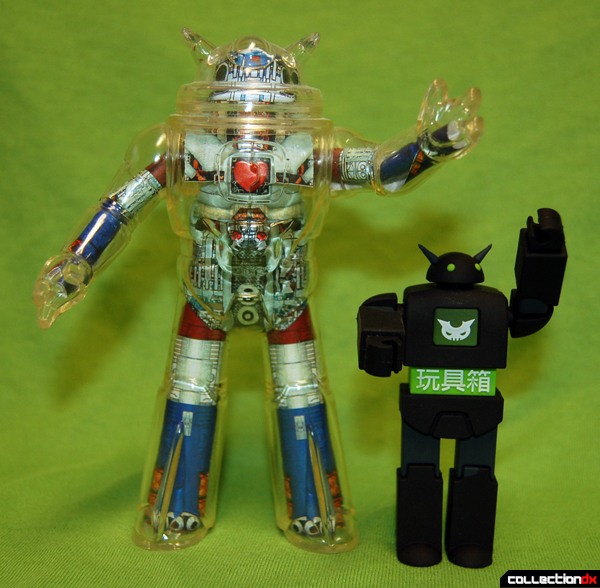 Or other vintage Popy robots 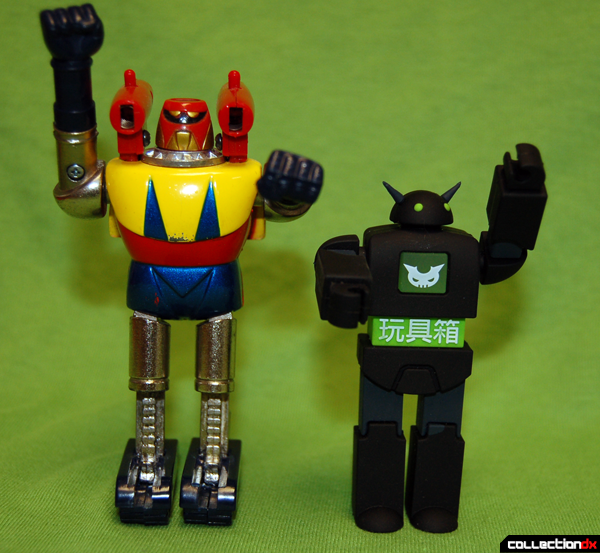 Nekobot also features open-grip claws that allow you to mash whatever accessories you like into his hands, just like on the box art! Guns, swords, whatever… Nekobot looks great wielding the right tool for the job. 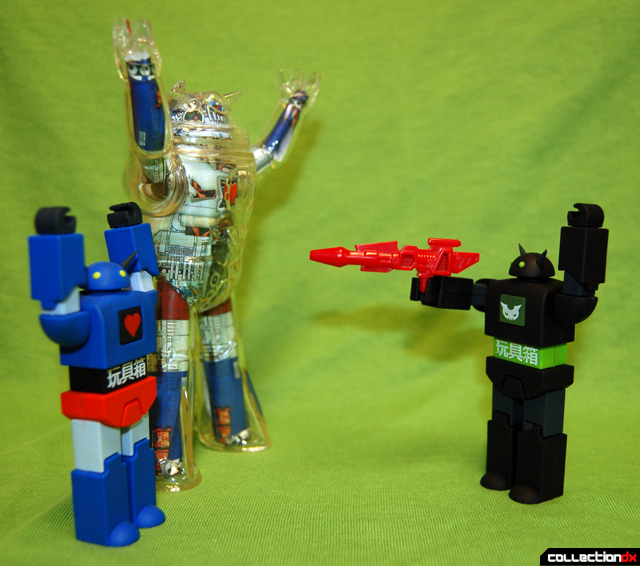 The Think Geek Stealth Nekobot retails for $39.99, which may seem like a lot, but for a limited run version of a home-grown designer toy that doubles as a useful piece of everyday data storage hardware, I don’t think the price is unreasonable. Regular release Nekobots retail for $29.99, which is a good enough price to assemble a data squad for your work or school bag. As a figure, Nekobots are a pure and simple joy, and the flash drive capability gives you an excuse to never be without one. Even if all you store on it are toy photos from Yahoo Japan auctions you missed, that’s important enough data to have on you always; you never know when data will come in handy!

Incubot's alright, but I'm holding out for that awesome voltron.

Also keep in mind, everyone, the sales of current projects (Nekobots) are what fund future products like the Voltron .
It is the nature of small self funded companies.

The one drawback of these guys is that the horns and the joints really just seem too weak to actually carry it around. I'm pretty sure that in any pocket of my backpack, the arms, head and horns would tear out of their sockets within a week.

I'm pretty happy with my single original Nekobot, but I want that catalog pamphlet!

The blue regular release pictured in this review lived in the front pouch of my backpack this whole year at college, being used two or three times a week at least. They are plenty rugged... the arms can't even be pulled out of their sockets, and the horns have enough flex that they arent going anywhere.

Naw, the arms can easily be pulled out of their sockets (and stuck back in!) if you TRY to :p

The part that broke on mine is the neck, actually. The horns, though, are the real reason I'd never carry it around with me on a daily basis.

Yes, the horns are delicate. I've used my Blue Nekosaur extenseively in-pocket, and one horn is on the verge of coming off.
However, I make that statement only in the interest of accuracy. If you are coming up with reasons NOT to get one, chances are you already have the small 2 gigs of memory issue as part of your arsenal.
The reason to get these are because they are insufferably cool, crisp, cute designs, and are made by local, nice folk who are pursuing a dream. If that doesn't outweigh any reservations you have about getting one, then your heart is as cold as the heart of that nefarious Rat King of HELL.
JBIYH!
:)