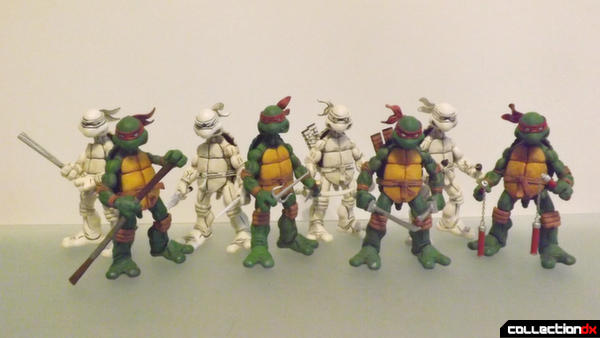 I`ve never been that much of a TMNT fan, but i couldn`t resist these NECA figures not long after they were released.

Created in 1984 by Kevin Eastman and Peter Laird as a parody of four of the most popular comics of the early 1980`s: Marvel Comics' Daredevil and New Mutants, Dave Sim's Cerebus, and Frank Miller's Ronin.

The comic books were originally far more violent and adult than the TV shows or films, even to this day.
For this review i have the black and white and the coloured versions of the NECA figures. 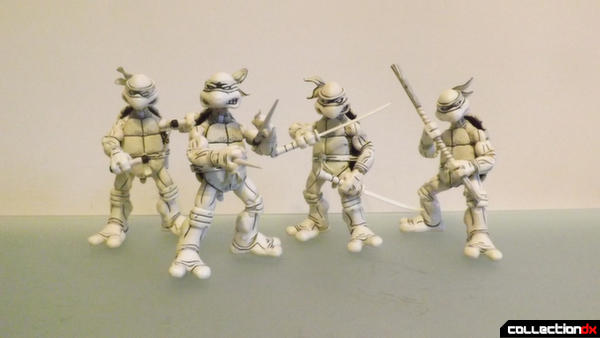 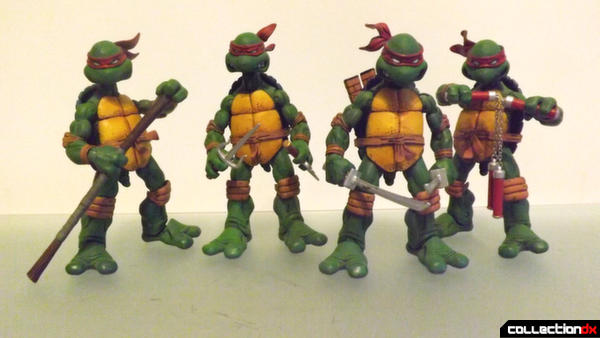 The body sculpts on these figures are the same for each character, the head sculpts are slightly different with varying facial expressions and mask ties.

First up is Leonardo, the only character to have specific weapon storage for his Kitana on his back, the swords can fit in both sheaths.

The swords for my coloured version of Leo both broke off at the hilt and i haven`t been able to fix them, so for the pictures im using the swords from the 2013 version of Leonardo.

A quick side note, in the comics the colours of the masks are red for all four Turtles. 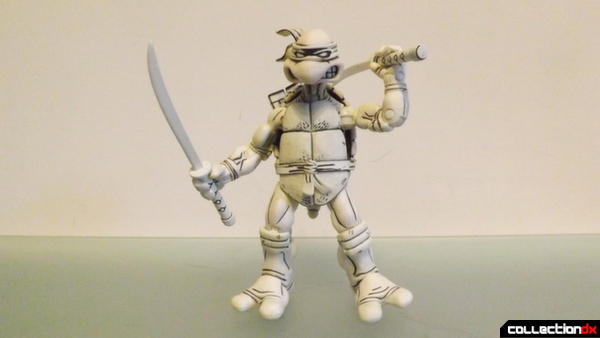 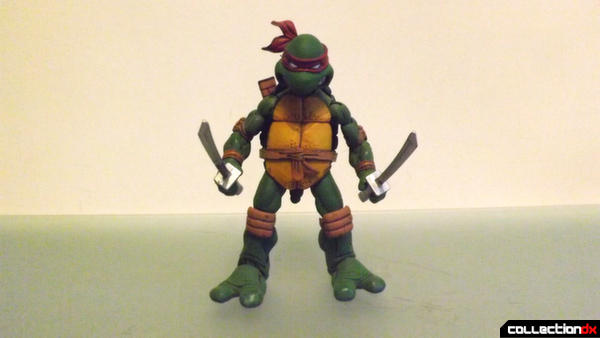 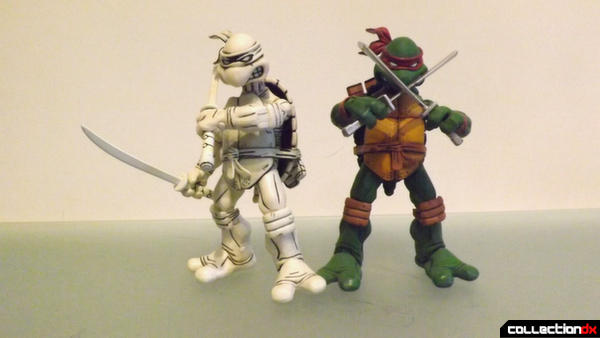 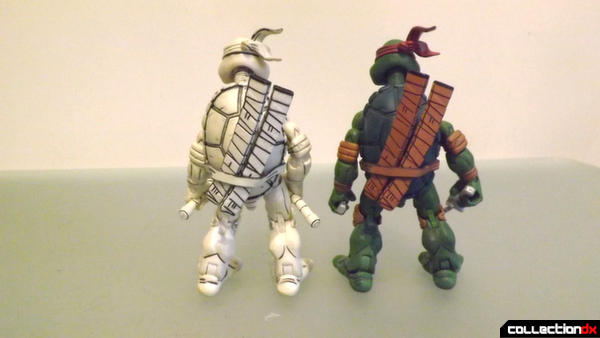 Raphael, my favorite character in the group.

The figure come with a set of Sai (i think thats the plural), and can be held in various ways, all of which i`ve tried to document in the pictures of this review.

Raph has the most angry face in the group, which fits his character being the "bad boy".

The coloured versions of the Sai have a nice silver paint on the blade, with red paint for the wrap on the grip and metallic gold for the end of the hilt.

The black and white version is all white, except for black line details on the grip and black for the end of the hilt. 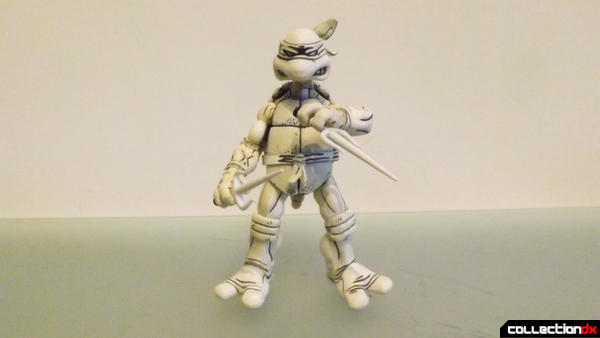 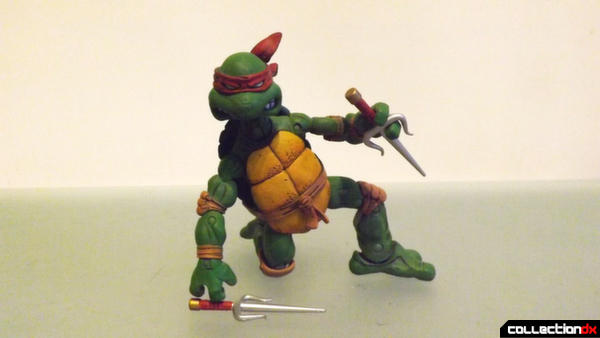 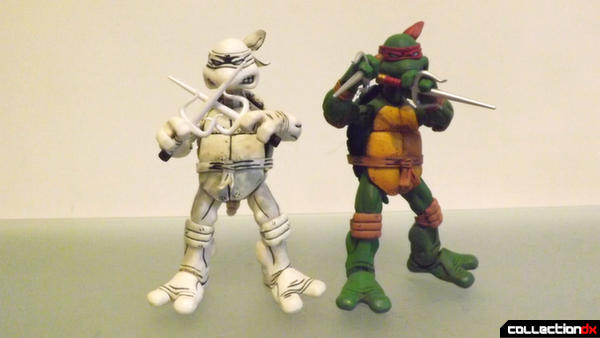 Fun loving Michelangelo`s face is the opposite of Raphael`s with a toothy smile.

He comes with two Nunchuck`s, each with real metal chains.

Mikey`s mask is the only one of the group whose ties are sculpted flying to the right rather than the left.

The Nunchuck`s are red and silver for the coloured version and white with black detailing for the black and white version. 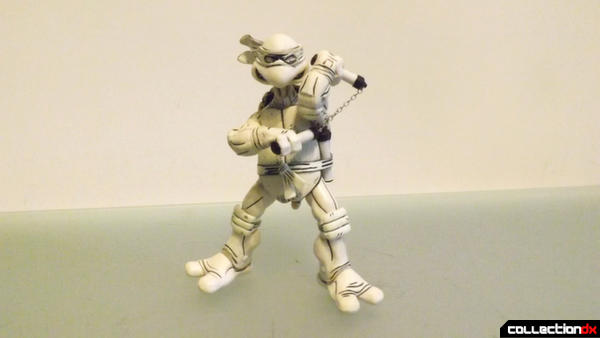 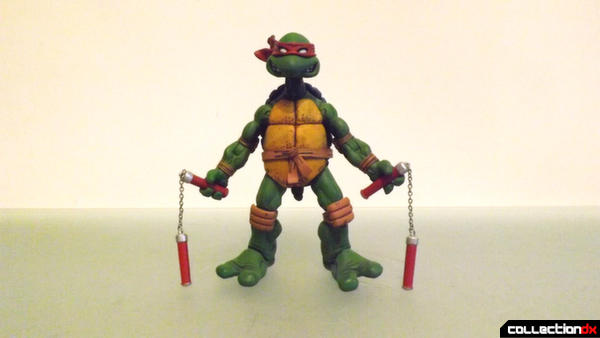 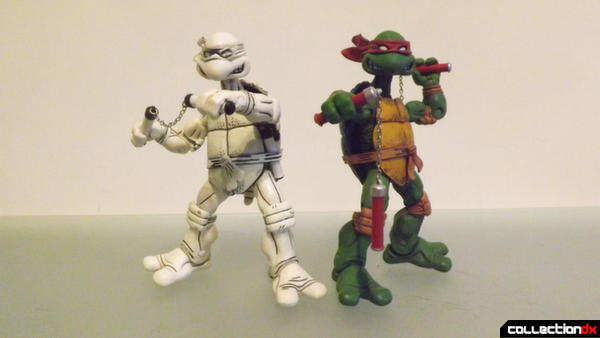 Finally we have Donatello, who in the comic was credited with killing The Shredder in the first issue.

The face sculpt on Donny is the only one with a closed mouth.

He comes with his Bo Staff, which separates in two to make it easier to place in the figure's hands.

In colour, the staff is a nice brown colour with black line detailing and has a grey wrap for the grip, the staff is also not completely straight and has little kinks, looking like it was carved by Donny himself. 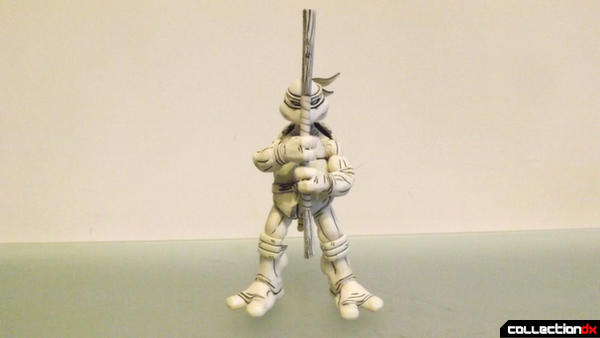 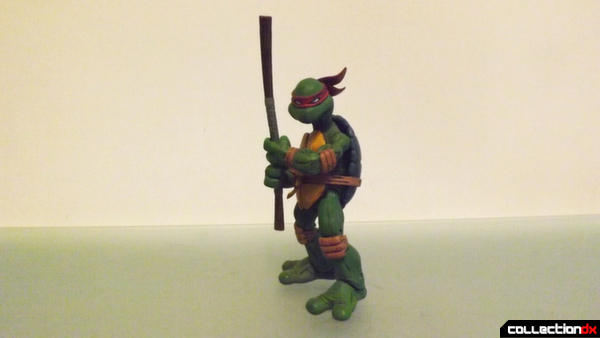 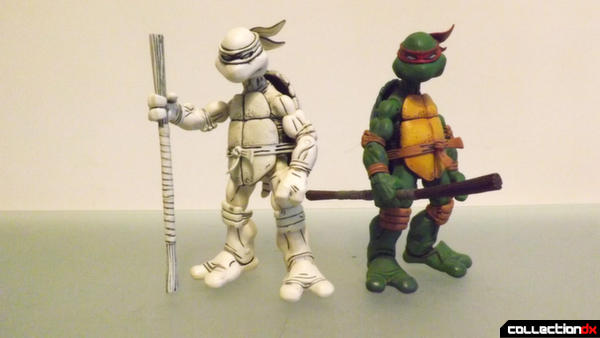 As i mentioned earlier Leonardo is the only figure who has weapon storage on his shell, the other figures have the same sculpt, shown below is the backs of Mikey and Donny. 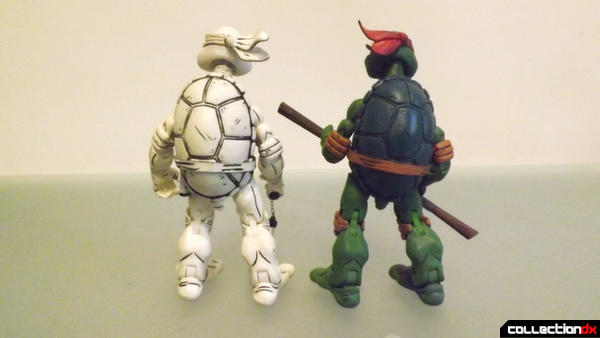 Here is a closer look at the faces of each character in a group, the sculpts are the same for the black and white figures.

And a closer look at the weapons side by side. 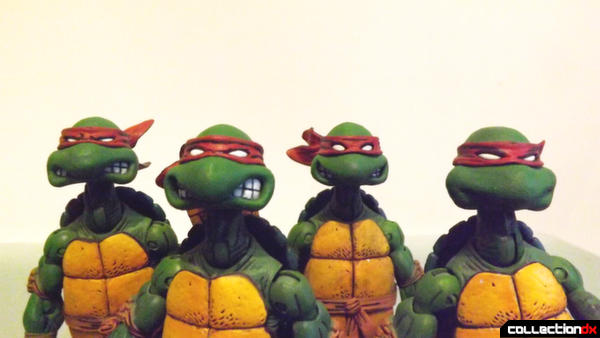 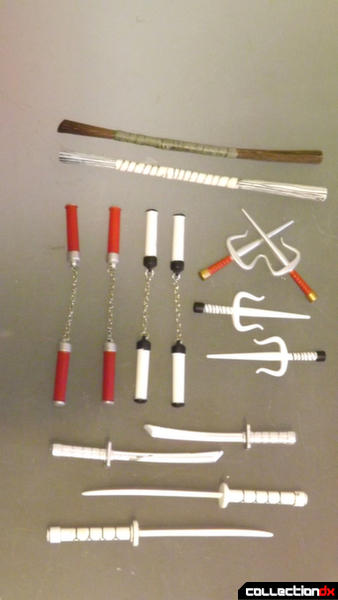 The weapons can be stored on each character other than Donatello. Leo i've covered, Michelangelo and Raphael`s weapons can be wedged into their belts at the side, the side prongs on Raphael`s Sai can be placed over the belt to be more secure. 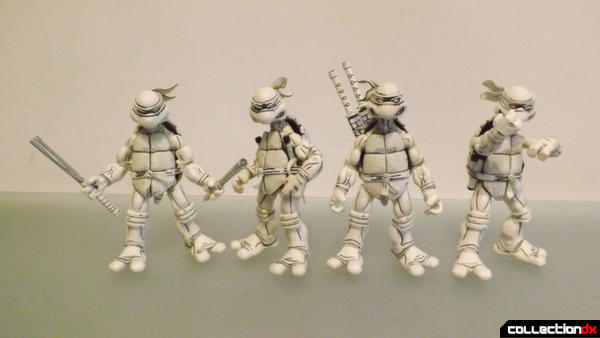 These figures are in NECA`s usual 7 inch scale, but as the Turtles are smaller than human characters they stand just under 6 inches which is in scale. 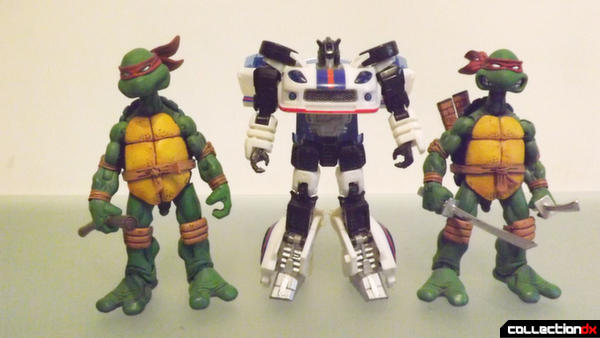 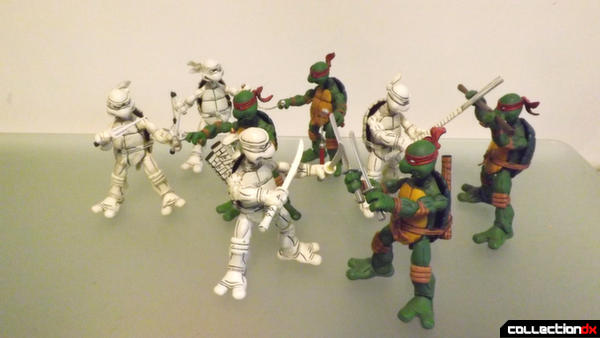 Originally i only wanted the black and white versions of these figures, I was offered a deal on the coloured versions from the same seller that I couldn`t refuse.

The coloured versions pop up on Ebay quite often, the black and white figures are much more difficult to find and are far more expensive.

Both versions look great, but for me, its all about the black and white figures.

Here`s a full group shot with the latest versions of the characters. 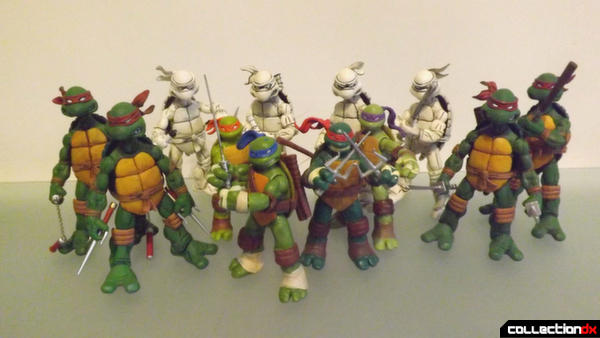 Jmann, this one`s for you. 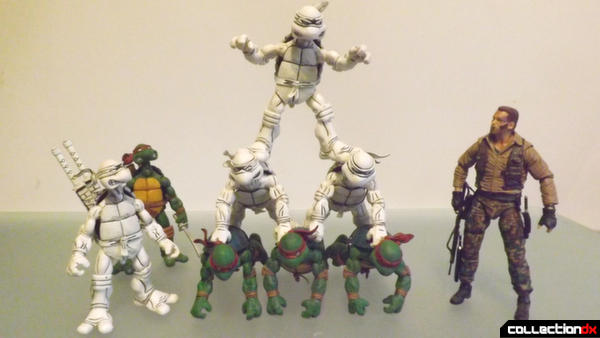 Brilliant! I need to pick this set up!

I am a huge TMNT fan, and this is by far my favorite plastic repreresentation of the half shell heroes. Of course, they are made by the Four Horsemen, what else could one expect? exccelent set

I was not keen on these figures when I had them due to their design and the poor quality control. Some broke when opening them.