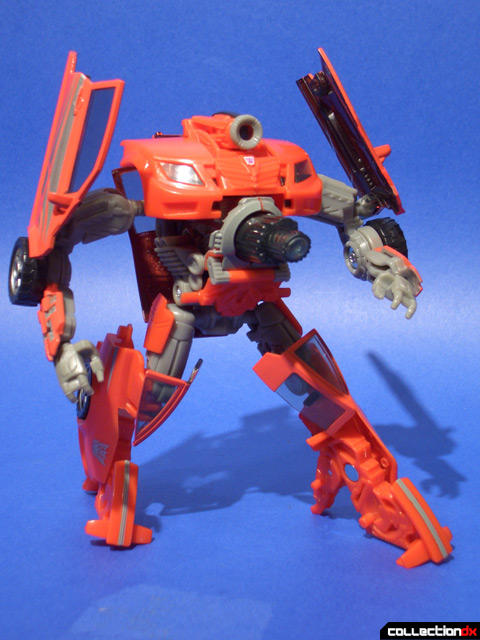 I think all the drones for the Transformers Video Game actually make some pretty slick looking robots and Hasbro has toys for all of them hitting the shelves in the coming months. Swindle is the first to hit the shelves and I went ahead and picked him up. It’s not a bad toy but is definitely a sharp looking robot even if it is way different for a Transformer. 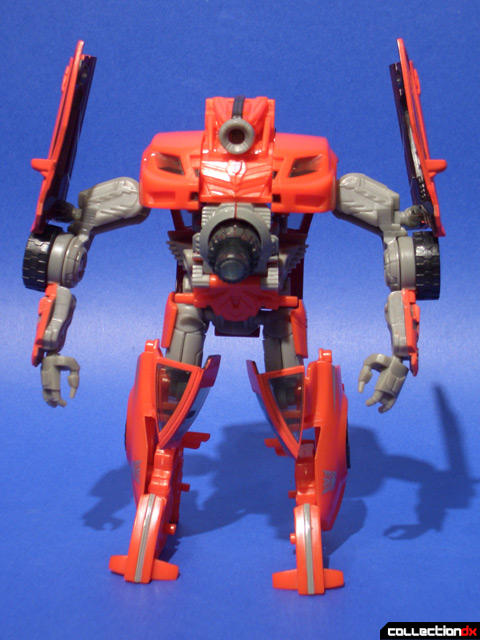 The pose ability of the figure is a bit limited by its design. I would have liked it if they had designed the legs to rotate to the left or right so you could get a bit more poseability and the head doesn’t turn. 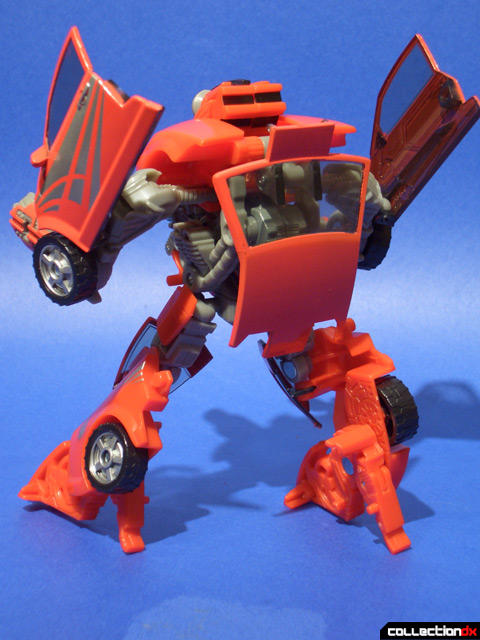 The chest cannon is a nice gimmick but would have been much cooler if it fired a missile, a bit of a miss in my opinion as Hasbro has been very liberal of late with firing missiles on other Transformers. 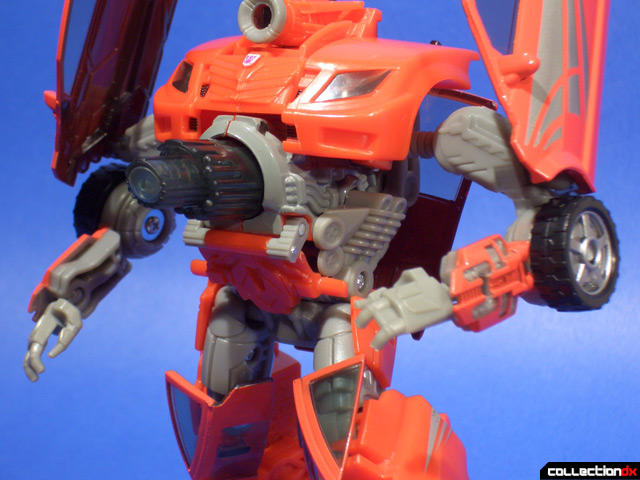 Swindle transforms into what looks like a sport version of a Dodge Neon. It’s not branded as such but it looks just like one. 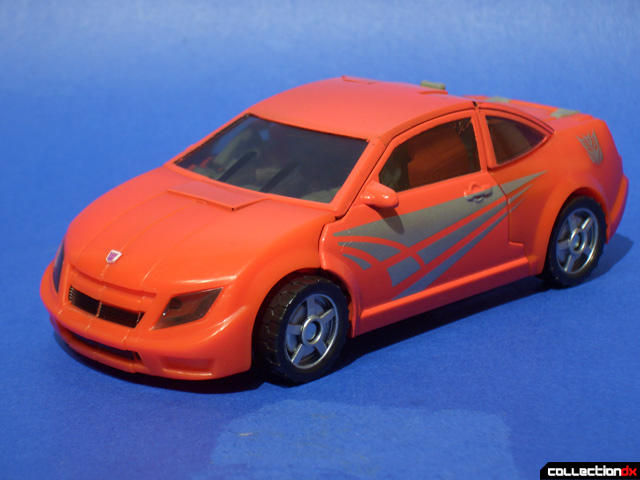 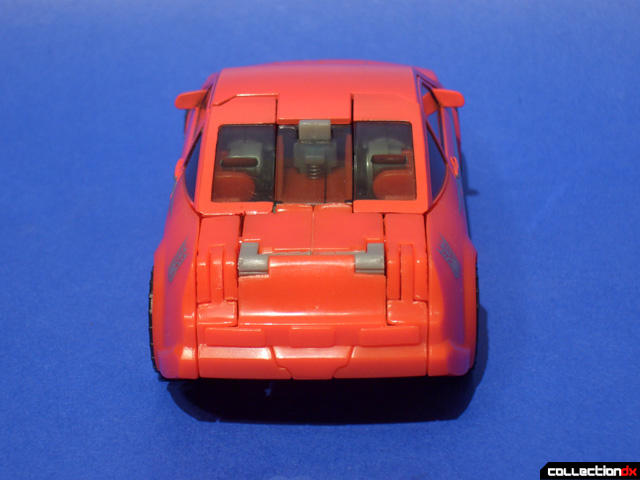 The chest cannon part pops out in car mode to fire out the back. Personally, it reminds me of the turbo on the Batmobile. 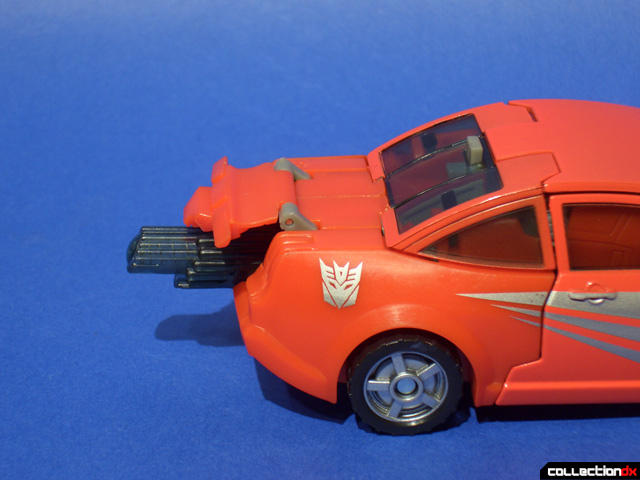 The toy feels a bit light and fragile but so far has held up to repeat transformation and handling very well. Overall I think the unique look of the robot merits grabbing it.

A quick video review is included for all the details and to see how it transforms. Be sure to check it out.

I confirm that Swindle here was not in the film. But even though his style closely resembles that used in the 2007 live-action film, he does not appear in it. According to Hasbro's official Transformers movie product page, there are several other Deluxe-class Cybertronians there that also match Swindle in style but did not appear in the movie, and are not repaints from previous series':

There are also Voyager-class repaints from the movie of Autobot Ratchet with a new white-on-red paint job (but same character) and Decepticon Thundercracker which is a repaint of Starscream.
.
While repaints like Thundercracker & Ratchet are [inevitable], what's up with the other five listed above? Are they also in the game, or are these toys that were made, but their characters were eliminated from the movie [like Swindle]?

Ehh, I'm not a big fan of repaints; they just feel cheep to me even if it's just a change in paint apps. Closet I may get for the movie repaints would be the Target-exclusive Autobot Signal Flare (originally "TF:Energon's" Decepticon Signal Flare).
.
However, now that you've confirmed them, I'll probably go for just Wreckage and then maybe Payload.
.
But as far as other tie-in products that don't actually appear in the movie, I've already picked up Autobot Longview and Decepticon Booster X10 from the clever Real Gear Robots line. Now these are robots in disguise-! (Longview is really the only 'functional' bot of the entire line because, even though you can't zoom in on distant objects like real binoculars, you can still look through the very tiny eyepieces. Although, I'll note, adults' eyes are too far apart to look through it properly...!) Ya know how Frenzy changed into both a boombox and a cell phone in the movie (that was him for the latter, right...?)? Well, these are the kind of toys that make you paranoid that they might really exist; like you want to double check just to make sure! I may get Decepticon Zoom Out 25x (camcorder with fold-out screen) and Booster X10-repaint Autobot Night Beat 7 (white 'iPod' player with cordless ear piece).
I'm still debating whether-or-not I want to get the Nerf missile-firing Converting Arm Blasters; those things are cool! If I do, I'll go for Starscream since he can shoot two at once.
------------------------------
CollectionDX Staff

Well, I've been wanting to cover some trademarked Transformers for quite a while now, but just haven't gotten to it yet. And, truth be told, I haven't followed it nearly as closely as I should have been the last 15 years. Super Sentai and LEGO stuff have most of my attention here, but I'd also like to branch out into-

You do know that the Classics Devastator/Constructicons are not original molds, and are just repaints from "TF:Energon", right...?
.
From the movie, I now have Barricade and Ironhide. I'm also planning on getting Blackout, '07 Camero-ver. Bumblebee, Jazz, and Ratchet, but I'm waiting for the Leader-class Brawl (aka Devastator) since that will be to-scale with the others compared to the Deluxe-class version. Others that I am considering getting are the '79 Camero ver. Bumblebee, Final Battle ver. Jazz, Bonecrusher, and maybe Leader-class Prime.

I found out about the Classics' Devastator from Ben's World of TransFormers- a fansite dedicated to all incarnations of Cybertronians from G1 through the 2007 movie, and beyond. For those who do not know, Benson Yee- who owns & operates the site- was credited as the "Transformers consultant" for "Beast Wars Transformers" (1996-99) about half-way through the second season- explaining the backstory & technical details of G1 to the senior writers of the show so that the (then-original) computer-animated series could be tied-in to the legacy and not violate what had come before. (*cough*Star_Trek_Enterprise*cough*) This has had the effect of tying him closely to the TF fandom at-large, and his name is well-known there. Thus, BWTF.com is preview to many toys and other special features that most other sites are not. It is, probably, one of the most articulate and accurate fan sites out there for Transformers, and is definitely worth bookmarking.
.
There is a wide range of toy and episode reviews there dating all the way back to the original anime in the early '80s!

I got Decepticon Barricade as my first Deluxe-class from the movie just to test the waters a bit, see what they were like. My biggest problems with him are the ball-&-socket joints at his shoulders & ankles, and how small/unaccommodating his feet are. The elbows are also rather restricting, and it's kinda hard to deploy that spring-loaded left arm feature. The paint apps (as I've come to find with all of the other movie changing sets) is not 100% accurate even with the box art, and seems a bit sparse! But the surface detail is excellent. (I have yet to open up my Autobot Ironhide for comparison.)
.
Of course, the disclaimer here is that the toy version(s) are not going to be 100% accurate with the movie incarnations since the CGI models are unbelievably complicated as it is, and would be impossible to recreate physically in a smaller scale for a toy. (JoshB's review of the Leader-class Optimus Prime proves as much, as it is very drastically- but not completely- different from what was seen on-screen!)
------------------------------
CollectionDX Staff

By all accounts, the Sector 7 Skyblast figure, which is just a repaint of Energon Skyblast, is an excellent toy.