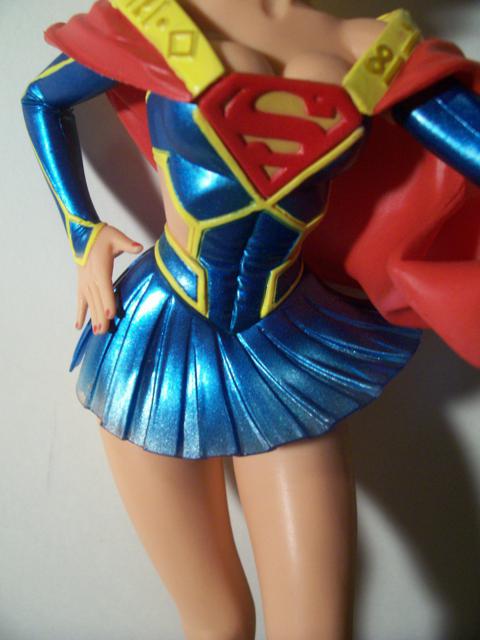 Character. Supergirl is Kara Zor El, aka Superman’s cousin. Kara was rocketed from her destroyed Kryptonian homeworld and arrived as a teenager,rather than as a baby,giving her the "young woman growing up" perspective to the Superman comics mythology. Yes, I know there's more, but this is all that's relevant.

Supergirl wears the big red “S” and is probably one of the most immediately recognizable female DC characters. This represents the “Version 2” of Supergirl versus the “Version 1” (shown below) which was part of the first Ame Comi line and done in a more "moe" style.

Review.The statue stands about 8 inches tall and is typical of all the Ame Comi line with no cast-offs and no accessories.

Here is the four-color, window box. 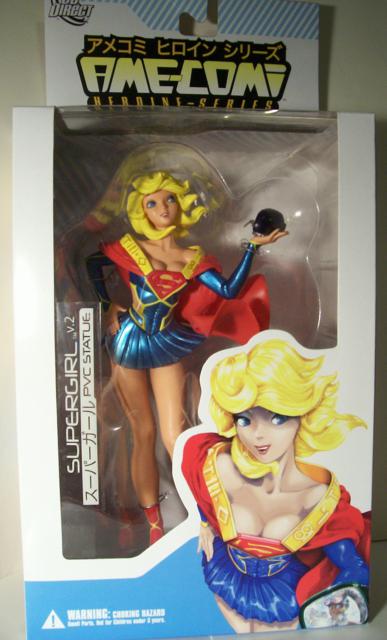 With a cool illustration of the “V.2” version of Supergirl. 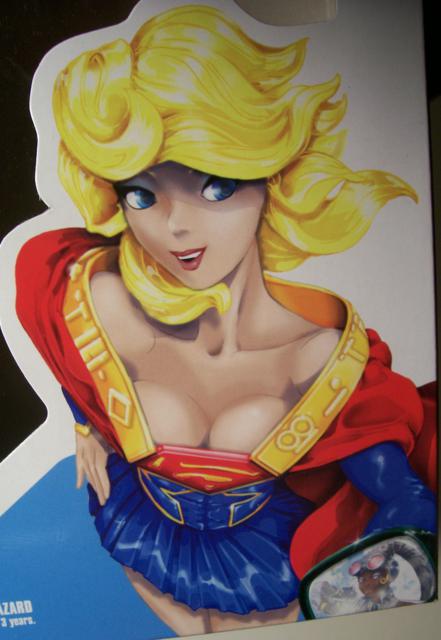 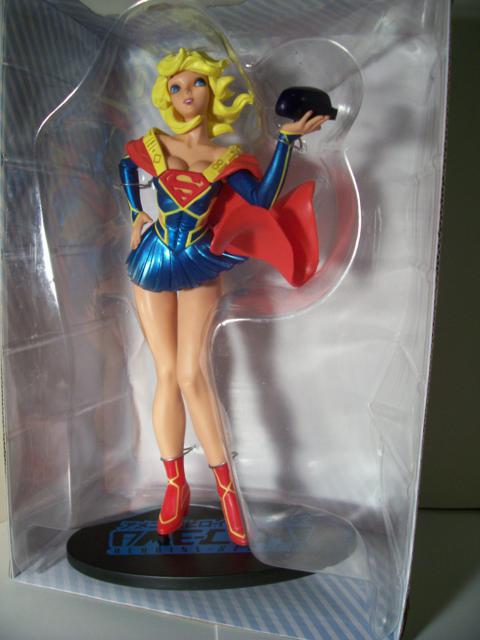 The V.2. Supergirl has a different costume and has a more mature look than the Supergirl in the first line of Ame-Comi statues. Here is the front.. 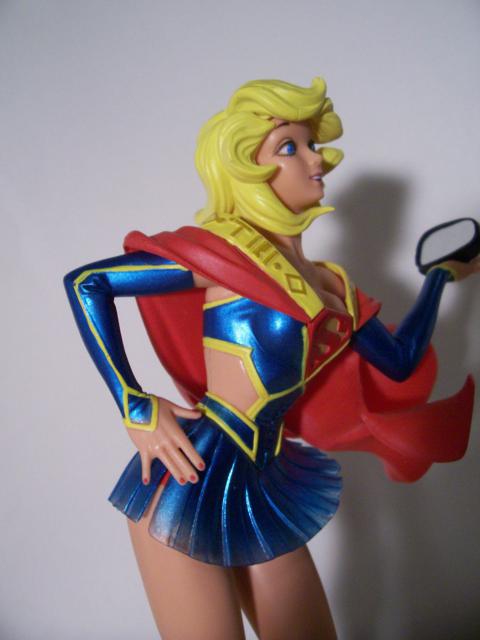 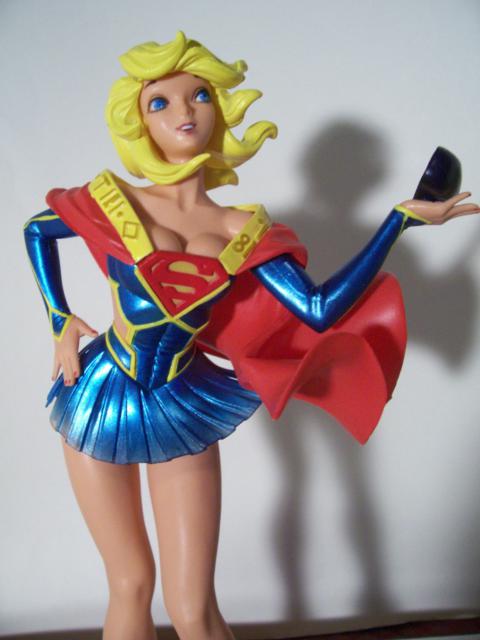 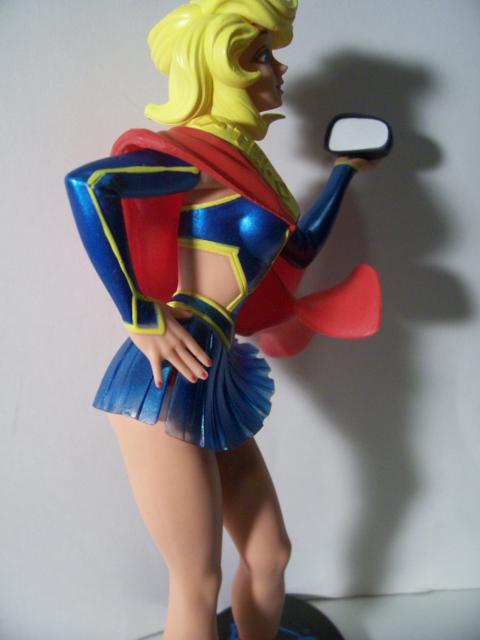 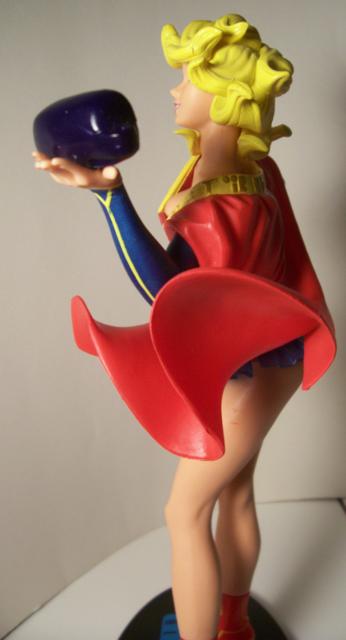 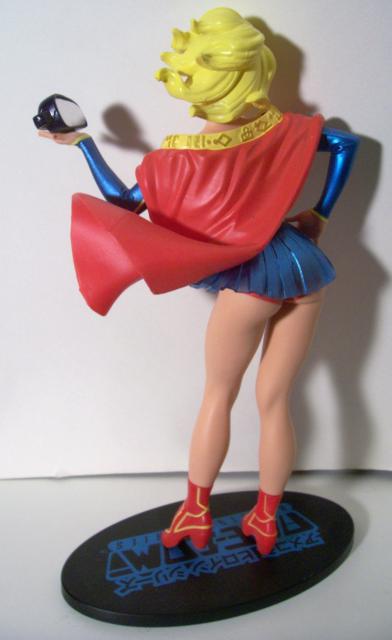 Supergirl V.2 is done in a slightly more realistic style and is more like a young woman and less like a creepy moe-style teenager. Eyes are smaller, and hair is more realistic. 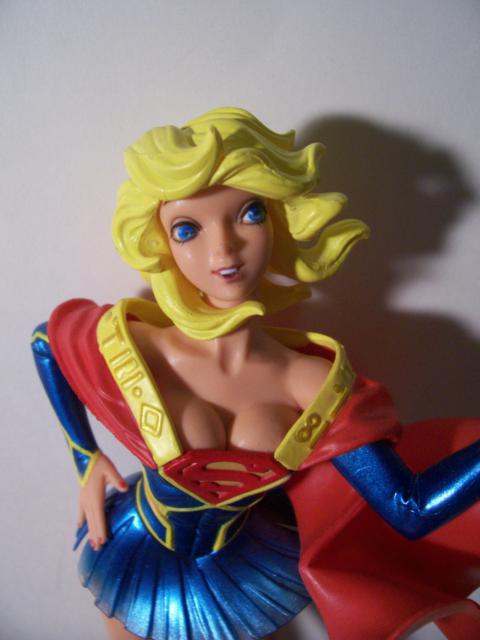 also some neat kryptonian details on her cape's collar... 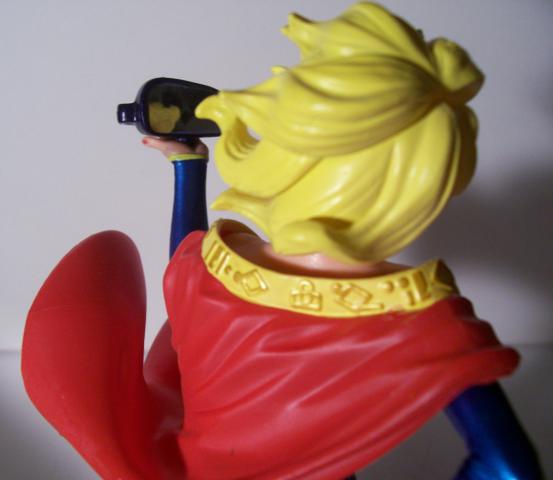 Supergirl V.2 is also assigned much more bountiful cleavage (and some costume detail). 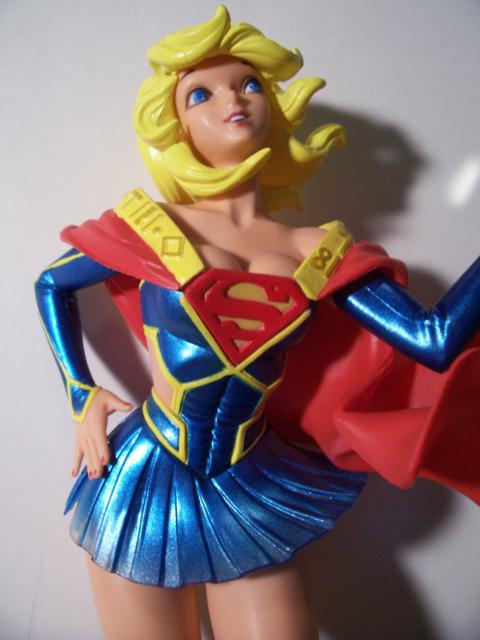 I'm guessing that we will eventually see a recolored version of this statue in white would basically allow them to do Power Girl (who is an older Supergirl from a parallel Earth).

The V2 Supergirl does not have the full belly shirt as the V1 Supergirl did, but she does have a top showing skin from her abdomen. 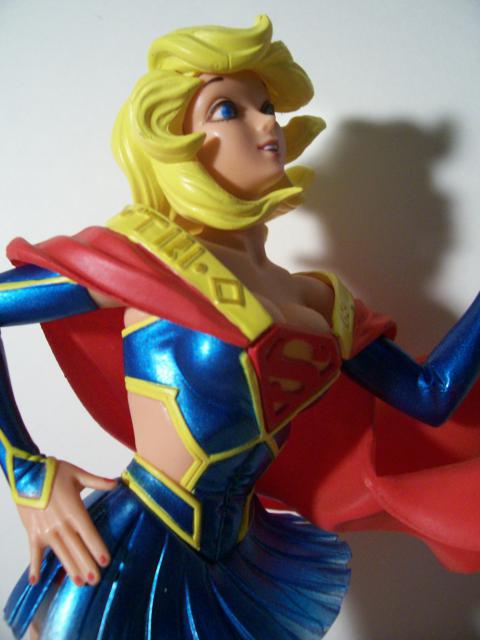 she's supposed to be posed checking her mirror as indicated on the box "scored from the street scraps of Metropolis." 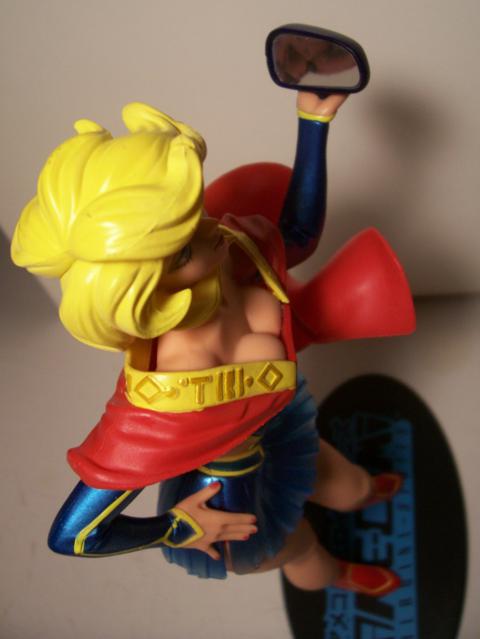 Details on the V2 Supergirl are consistent with the increasingly better quality sculpts I’ve come to expect from the newer Ame Comi statues.The skirt on V2 Supergirl is short and is translucent around the edge, presumably to give us a bit more viewing access to the ass and panties region. 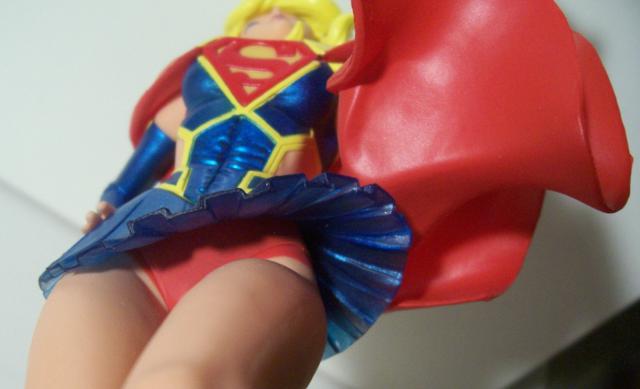 The ass on V2 Supergirl looks painted on as a second thought. Like the Steel statue, it looks like removing some paint would be all that it would take to make the statue's ass cheeks more pronounced. 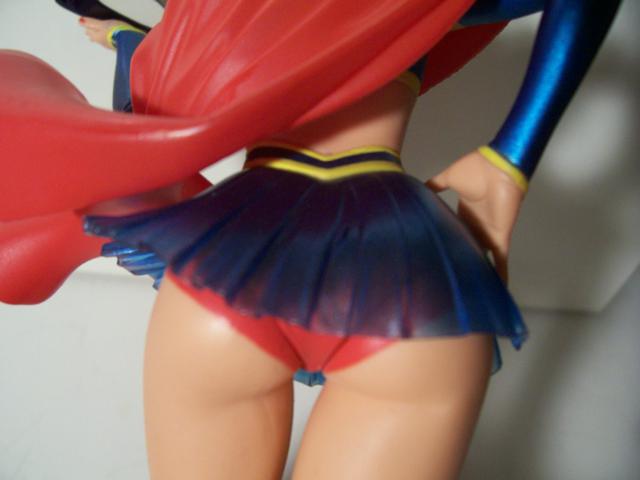 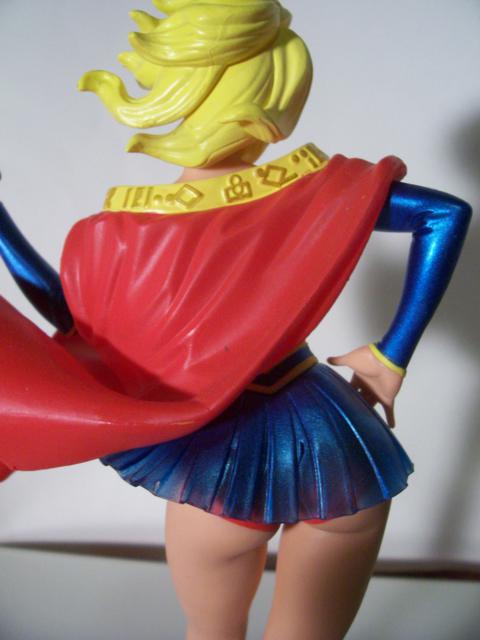 This gives us some of the main cheescake on this statue. Like the cleavage, there is just enough to give us a little sexy, but not too over the top.That said, both the skirt 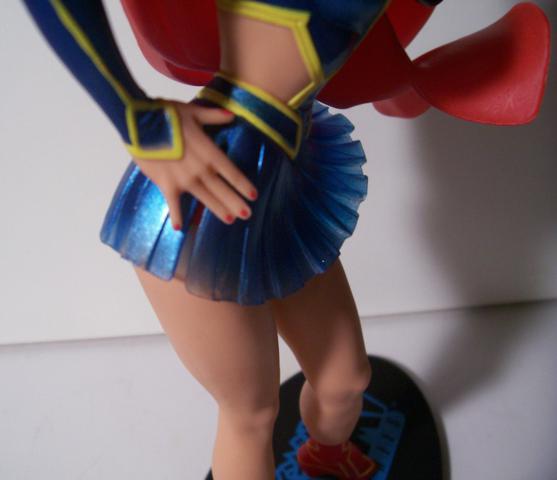 and the articulation between the cape and the top 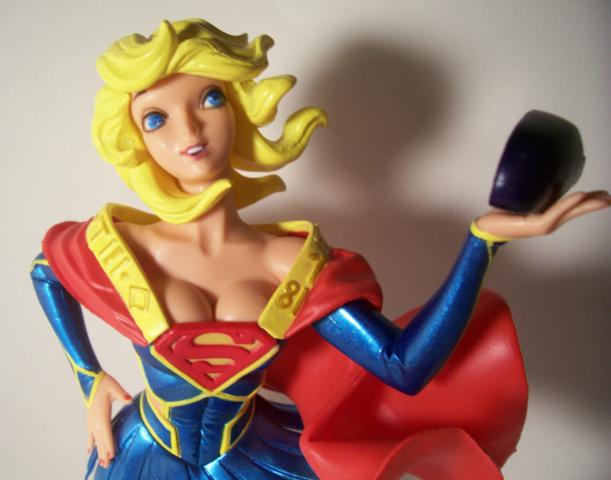 look like they are ready to be cast off should priorities shift.

Articulation between the feet and base seems solid. 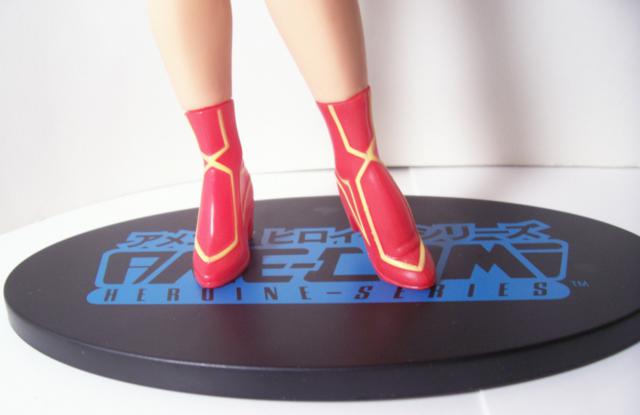 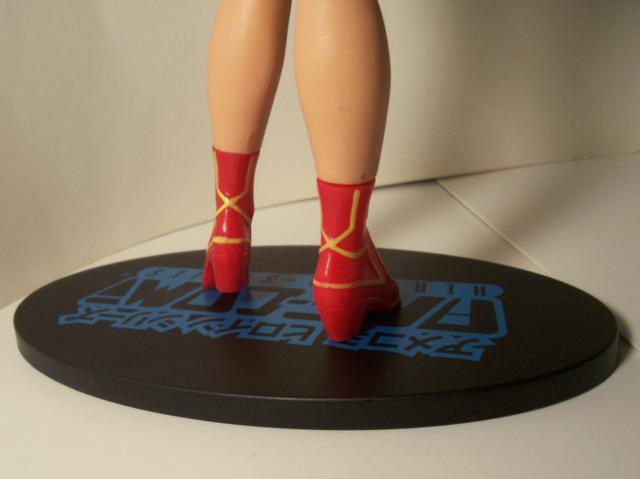 Overview.A nice statue. In a way, this makes for a nice bookend to the first Supergirl statue in the Ame Comi series. It is typical of all the things that I’ve liked about the Ame Comi line-the reimagined costume, the “pretty girl” pose with just enough tease to make the statue worth it. Honestly, the Kotobuikya statues are overall a bit more to my liking, which I think are a little sexier but like the DC vs. Marvel comics heroes themselves, there’s a dichotomy in styles which lends the figures to different sculpts.