El Baron here represents a landmark occasion for me. I finally gave real model building a try. Honest to god glue and paint type model building. I've mentioned before how common this is for monster collectors so I knew it would only be a matter of time before I had to give it a go myself, and when I saw how cheap this kit from Ultratumba was, I figured it was as good a time as any.

El Baron comes from the movie "El Baron del Terror", which is more widely known in the the US as The Brainiac. This is a movie that I vividly remember seeing clips of on the old late night celebration of cult movies, Reel Wild Cinema, but I never actually saw the entire movie until just recently. If you are unfamiliar with it, it is viewable online.

This kit by Ultratumba is great for beginners like me. Not only is the initial cost cheap, but the construction of the main body is very simple. All you need to do is to line up the arms and glue them onto the body. You can fill in the seams at the shoulders if you like, but it really doesn't need it too much and I didn't bother to do that on mine. Both legs and the pelvis are one solid piece and attach easily as well. Then you can choose which tongue you'd like to display and glue that on. I thought the curved one looked a bit more interesting so I chose that over the one that is straight. Lastly, just add a drop of glue to the bottom of the feet and attach to the base, although I thought it was best to paint the figure before doing this. 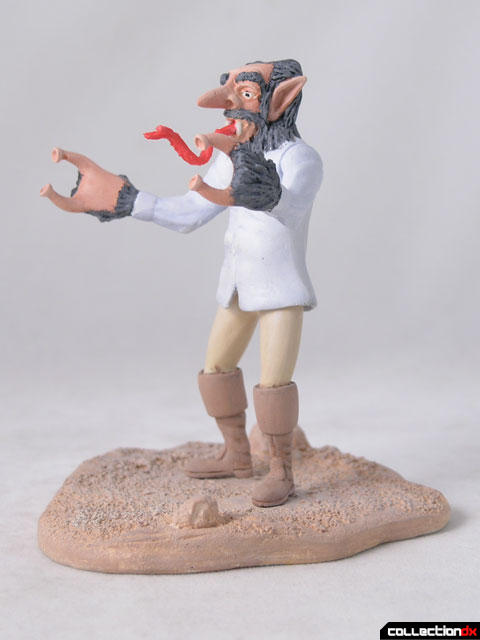 As with any model kit, you can choose whatever colors suit your fancy. Of course, with the original movie being in black and white, there's really no set color scheme that you need to match, but I chose to stick pretty close to the image on the box. For a first try, I wasn't looking to be very creative here. I just wanted to get it to look good enough to display. 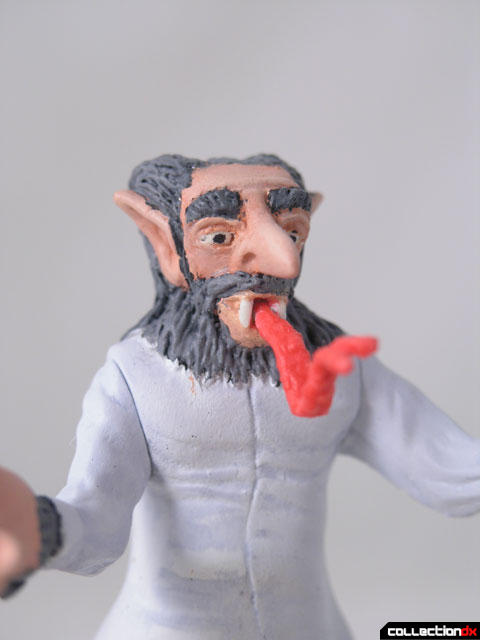 Ok, well maybe that's not entirely true. As you know, we here at CollectionDX love all things glow so I figured I would try to use up some leftover glow paint that I had while I was at it. But where on a piece like this would glow be appropriate? I decided that painting the tongue with red glow paint would be the most obvious place to start. And after having what I considered to be a bit of success with painting this, I guess I decided to get a bit crafty after all and try adding a touch of glow paint to the eyes and teeth. I don't exactly have the hands of a surgeon as they say so I was really afraid I was pushing my luck to try to paint such tiny areas, but overall, I think I did a pretty good job for a first try. 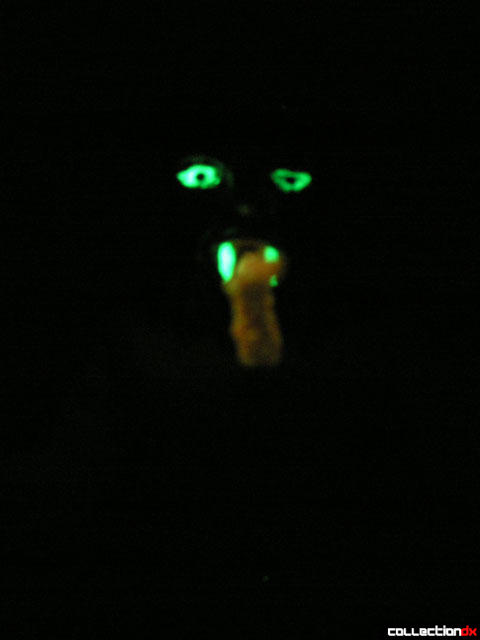 Well, that's all well and good, but really, I felt like having just a small amount of glow on the face was not quite enough. The glow was too localized. So what to do then? Well, as you see in the movie, this character comes to Earth in a meteor so although it's not exactly in the movie, I thought it would be neat to add a touch of glow to the base to represent a sort of "star dust" sprinkled on the ground around him. So, I decided to mix in a small amount of glow paint with the regular paint for the base in the hopes that it would produce the desired effect. I think it did! 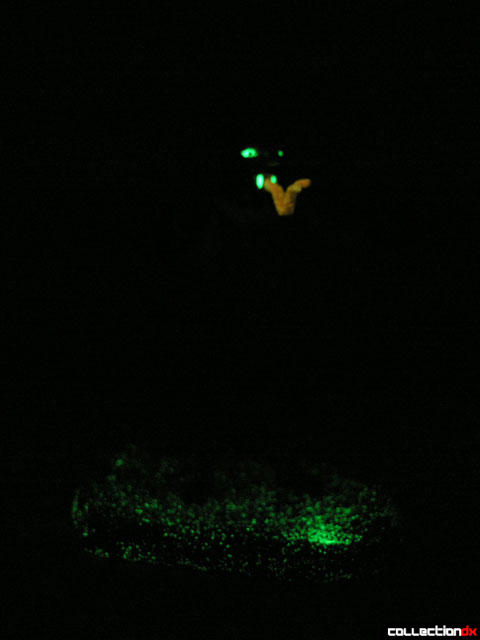 El Baron is limited to only 250 pieces and comes with a signed and numbered certificate of authenticity. It was a pretty fun kit to build and great for a beginner like me. I was always too hesitant to try this in the past because so many kits are expensive and I was afraid I would be wasting my money if I tried and failed. This one was not only inexpensive, but it gave me the confidence to try the second in this series of Mexican movie monster kits from Ultratumba, the Aztec Mummy. Coming soon!

If this is your first attempt well done! Creative idea with painting the figure with glow paint. Keep in mind that although figure kits are usually easy to build them nice, painting the figures is another story. When I first looked at this review I thought it was a factory paint job, so well done.

BTW I checked out your myspace and I liked your idea for your 2008 film schedule. Did you watch all those films each day?

I Like parts of Godard films as well but his films can get slow at times. They all seem to have one great technique in each film but I don't give too much for his love for communism. Alphaville was the first film I saw and I loved it, it is his best. He also hat really good looking women in his films as leads.

Thanks for the kind words, Leonardo! I should add, however, that Sanjeev did help me get started on this and I did the torso and most of the head sort of under his supervision. But I finished the hair, boots, base and glow on my own. So, thanks to him as well.

About the movies, you mean my movie viewing log? That's an idea I actually stole from Tom Franck, who I believe stole it in turn from Dan Waters, writer of "Heathers" and writer/director of "Sex and Death 101" (That dude watches a ton of movies each year. A TON.). I find it helps keep me watching movies regularly as I like to have roughtly 250-300 each year. Plus, it prevents me from accidentally starting to watch a movie I've already seen! If I'm not sure about one, I check the list. I can't tell you how many times I've done that and said "oh yeah, I did see that one and I saw it on such and such a date.. My memory is awful...LOL

Wow, this came out great! I got a chance to see this thing in person very briefly at JoshB's house, but the lighting wasn't good and there were plenty of distractions about. These pics actually came out pretty brilliantly!

And for the record, all I did was offer a few pointers. Dave did all the work!

The rest of the details came out great and the glow came out better than I would've imagined!