Would you believe me if I said I wrote this doing my best Mark Hamill impression..?

I really don’t care for Batman. I mean seriously, a guy who dresses up like a bat clearly has issues.
Why so serious?

Why do all of his gadgets have the word “Bat” in front of them?!

…and what’s with the voice? It sounds like he’s either out of breath or has a sore throat. It’s not like anybody knows he’s actually Bruce Wayne…. OOPSY! SPOILER ALERT! 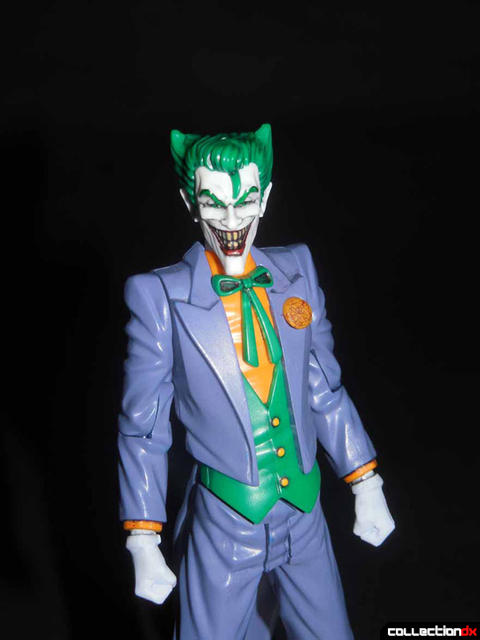 Always adding the punch in punchline, the fun in funeral and he’s got that smile that says no matter how sinister his plan is, it’s going be funny. 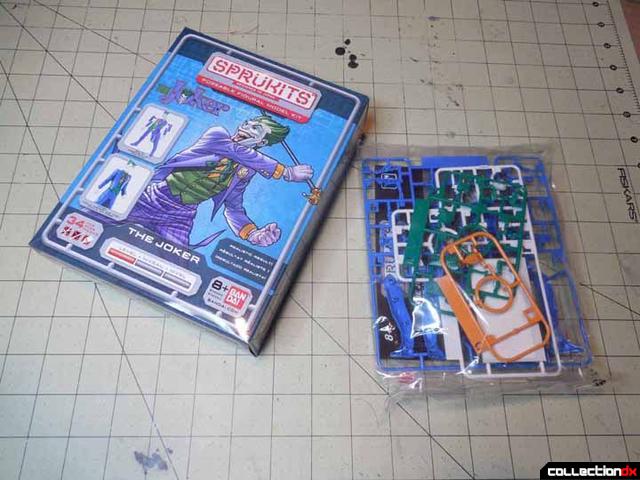 As part of their attempt at making action figure model kits relevant in America again, Bandai’s Sprukits line is populated of franchises popular here in the West currently short sheeted to DC Comics’ top tights-wearing duo and the armored hero of the “Halo” video game.

While the Master Chief and the Guano Knight got the superstar treatment in the Level 2 and Level 3 scales, Bandai gave us the Clown Prince of Crime in their Level 1 assortment.

Although the designs for the different Batman models available are based on the recent comics, video games, and movies, the Sprukits Joker model has no direct ties to a media appearance other than the character himself and I’m perfectly okay with that.

Sprukits are supposed to be snap-together model kits that require no tools, paint, or glue to assemble them....

Like their 1:144 scale “First Grade” Gunpla models from “Gundam SEED” and “Gundam 00,” Bandai’s ‘Level 1’ Sprukits are both an introductory model and a test of one’s skill with a paint brush. 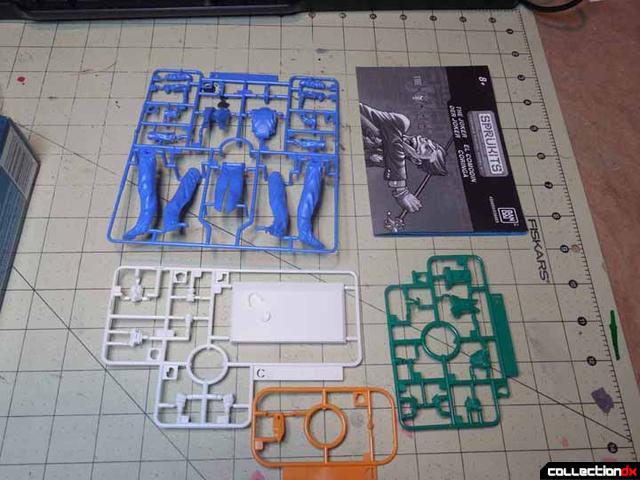 Out of the box, the Joker is molded partially in his classic colors. White plastic makes up the Joker’s head and hands, with his shirt and vest molded in yellow and green plastic. 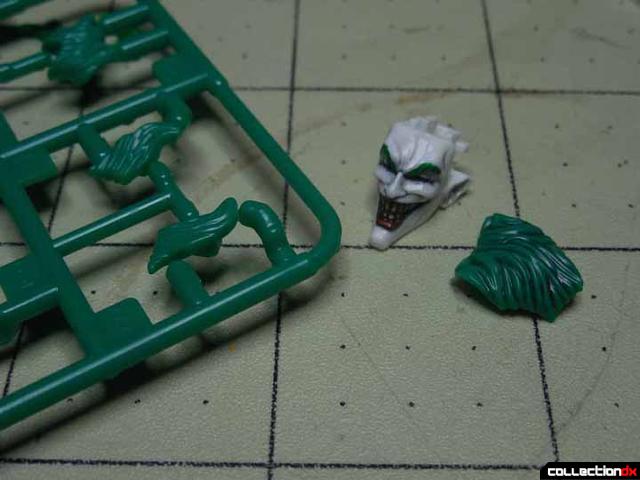 The Joker’s hair is molded into five pieces of green plastic, pushing the model to the 34 piece parts-count listed on the box. 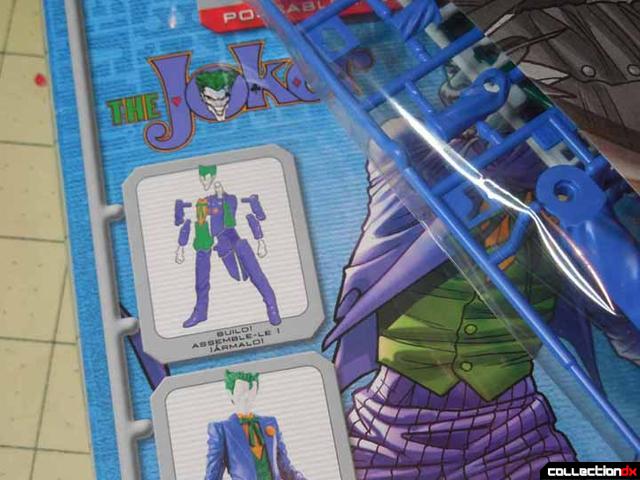 The oddity of the Joker’s plastic colors is his suit molded in blue plastic instead of the character’s traditional purple.

It is odd because the box art shows him in a purple suit, the digital model of the kit is purple, but the final product is… blue.

…and they say I’m crazy.

Since my local hobby shops don’t carry my usual brand of paint in non-metallic purple or violet colors, and because I didn’t feel like ordering any paint online this time, I wound up making my own. 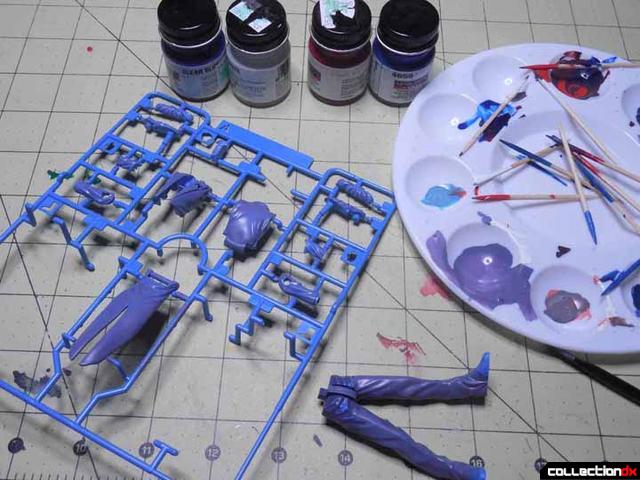 This was another Testors Model Master Acryl recipe with Flat White, Guards Red, French Blue and Clear Blue without a touch of Worcestershire sauce to make a pale violet.

Personally, the mixture reminds me of the Joker’s colors from the early seasons from “Batman: The Animated Series.” 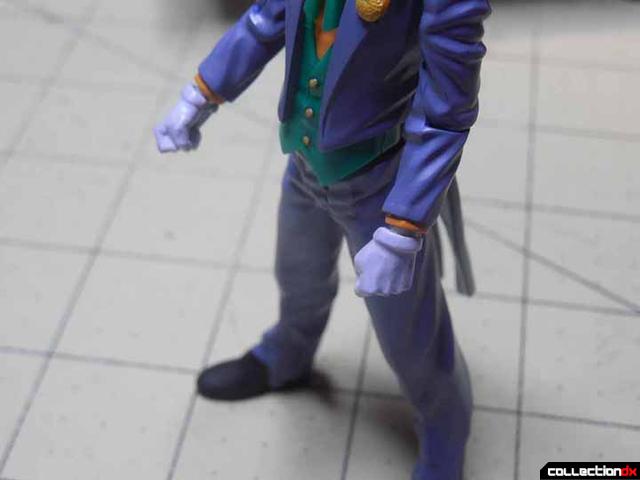 Mixing it with an extra drop (or two) of flat white, I made an even paler violet that I used to paint the Joker’s gloves. 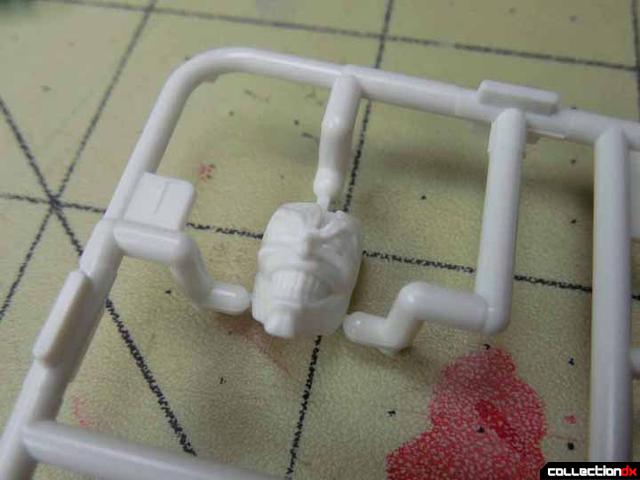 The Joker’s head is one of the best areas of the model simply because it is fully detailed with the Joker’s patented grin that deserves to be painted in. 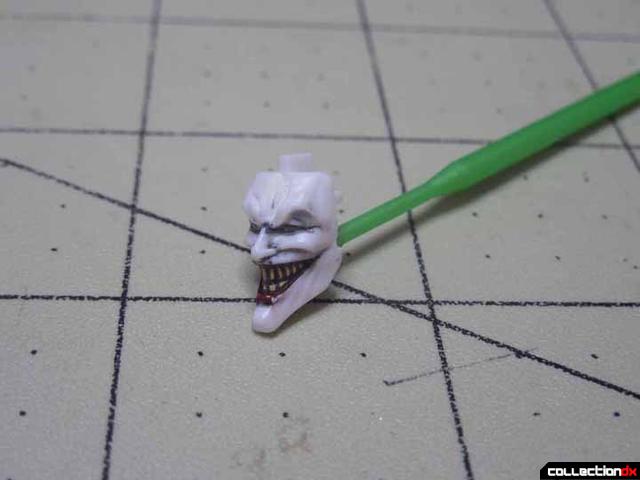 Using the same technique as I do with my 1:100 scale Master Grade pilot figurines, I used a GM02 (Gray) Gundammarker ink and weathered it into the wrinkles of the Joker’s face. This also served to set my borders for when I painted the Joker’s eyes and eyebrows. 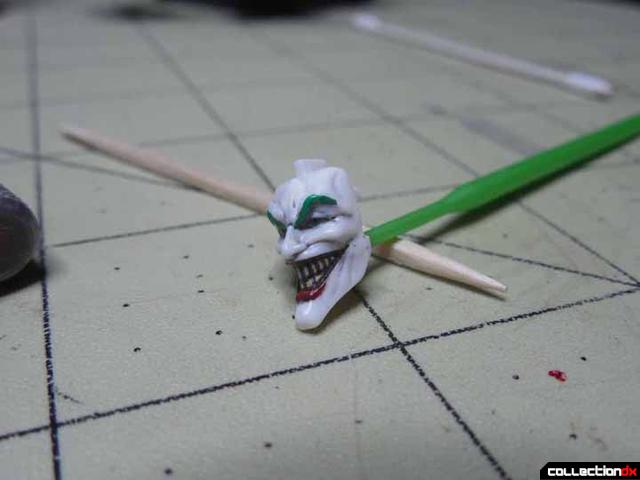 For his mouth, I used a GM03 (Brown) Gundammarker to act as a border before painting the lips and teeth, to which I applied some of my special “Red Comet Red” mixture and a blend of Flat White and Insignia Yellow acrylics for his buttery pearly whites.

“How did I get all of those wonderful details so precise,” you ask?

WITH A SHARPENED TOOTHPICK!! AHAHAHA!! 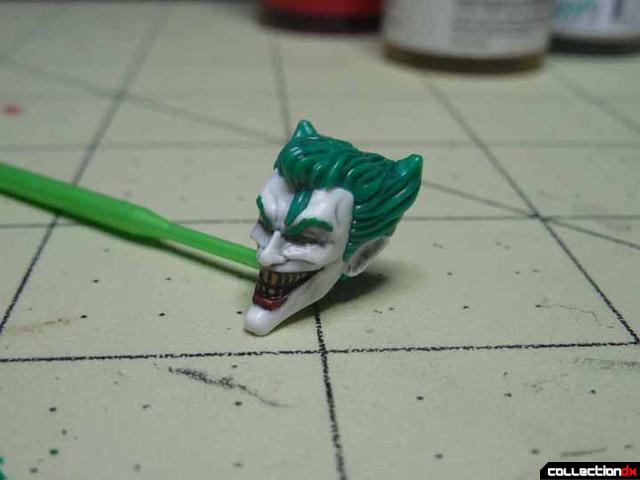 While I normally leave building the heads for last when it comes to Gunpla, I wanted to paint the Joker’s face first if I were to ever abandon the rest of the model.

However we all knew that was never going to happen… 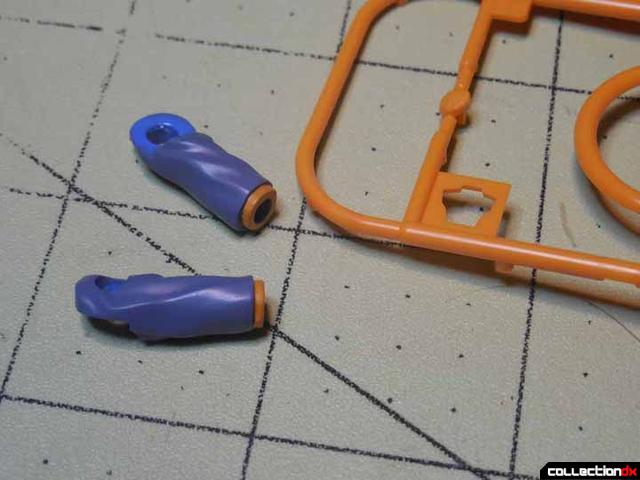 An extra added touch I gave to the Joker was painting the buttons on the cuffs of his jacket sleeves. 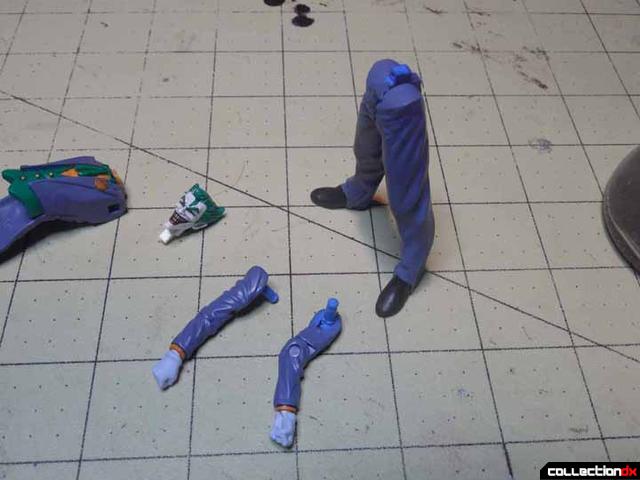 Because of the Sprukits’ easy construction scheme, building the Joker is… a snap.

But seriously folks, I still used some glue because I was painting. 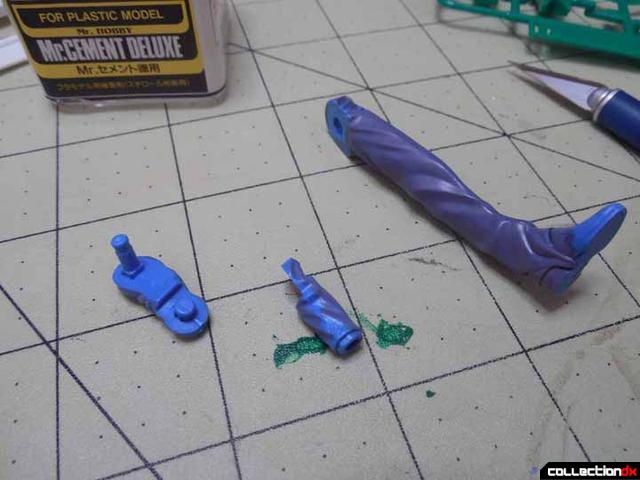 The distribution of the model’s 34 parts is a little uneven in my perspective that seems to make the model top heavy. 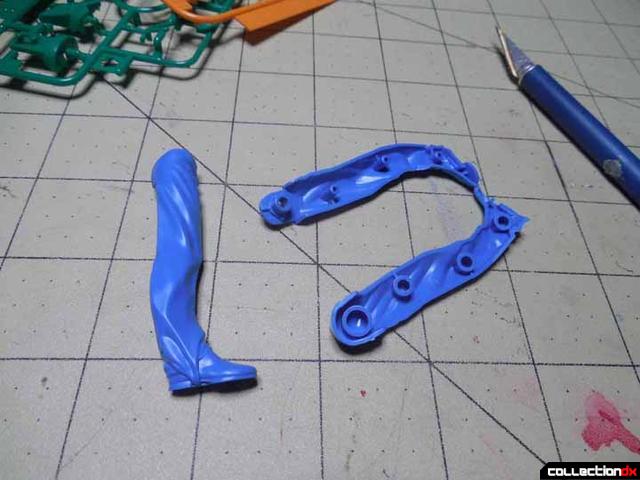 There are four pieces (not counting the hands) for each of the Joker’s arms while the legs are made from two halves each. 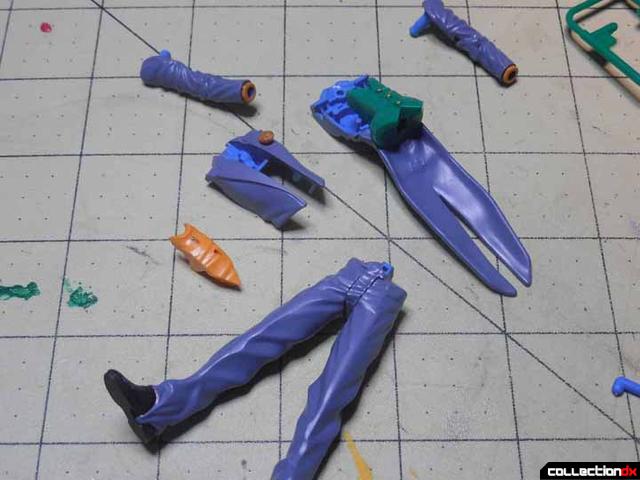 His torso is done in layers coming out from the vest wrapped in his coat before his shirt and bow are inserted last along with the flower on his lapel. 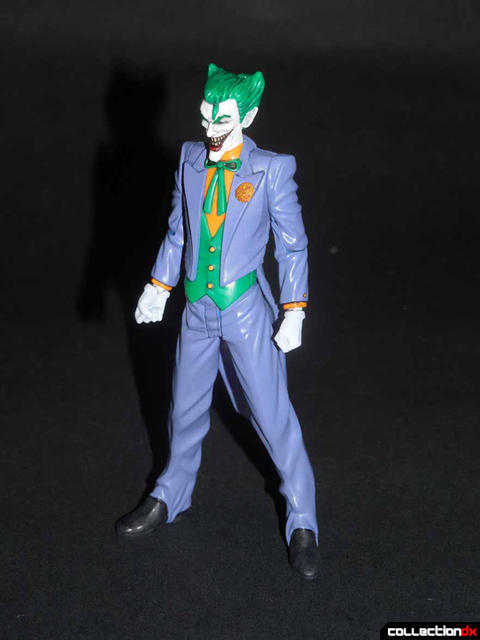 Fully built, the Joker stands just a quaff of hair over 4 inches tall. 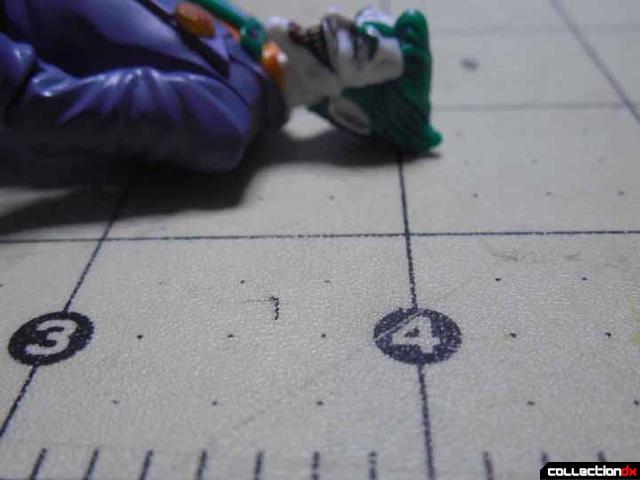 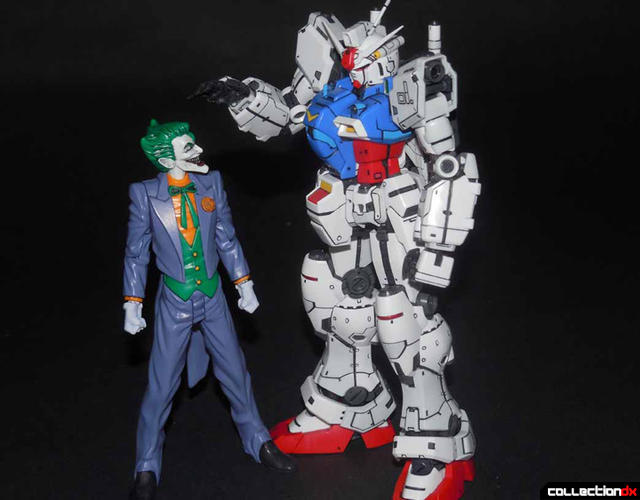 To be honest, I was quite surprised at how small the Joker was compared to my usual 1:144 scale.

For an action figure model kit, the Joker doesn’t have much “Action.” 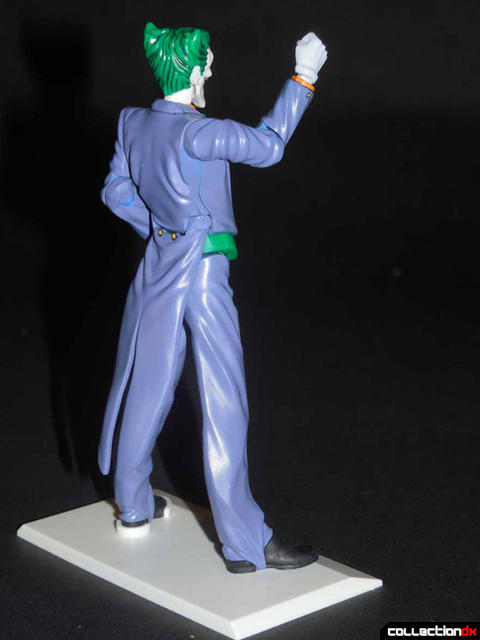 Once completed, Joker’s articulation is very minimal with rotation in the head, shoulder and thigh. He has hinged elbows and swiveling wrists but no knee or ankle movement. 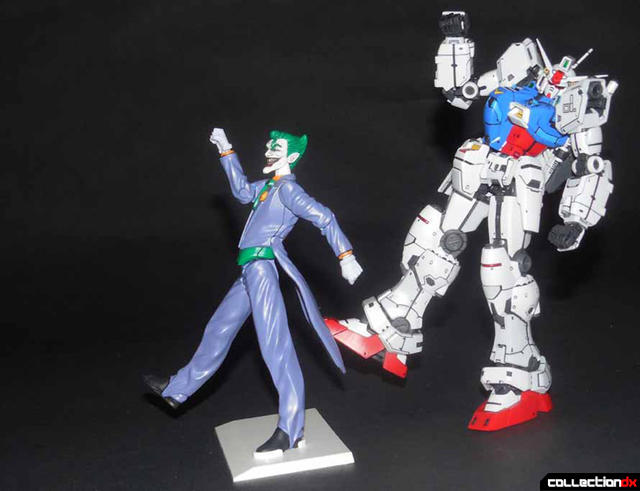 His coat tail surprisingly, is hinged as well. 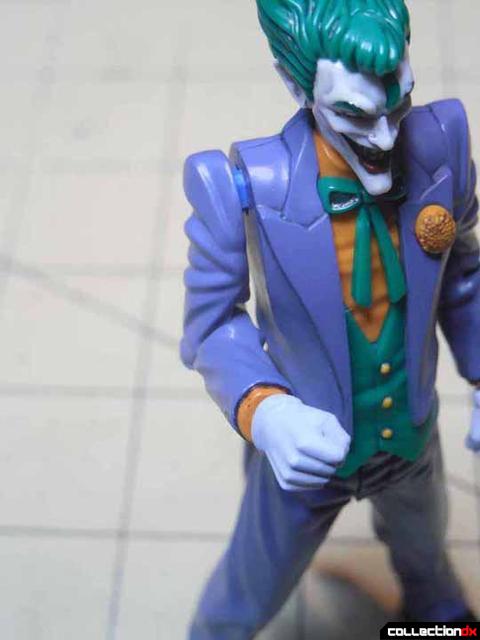 The arms and legs have to be pulled slightly out of the socket before they can be rotated, but even so their movement is very limited. In fact, they’re really designed to remain in a fixed pose. As a Level 1 model, the Joker comes without any accessories in spite of the fact the box shows him with his jester’s cane.

This is really a missed opportunity considering the Joker’s vast arsenal of comedic killing tools.

No pistol with a “BANG!” flag.

No stack of TNT strapped to an alarm clock.

No pockets full of knives and lint.

There’s not even a blood stained crow bar!

The only accessory that comes with the model is a display base with a raised ring for the left foot to rest in. Overall, the Level 1 Sprukits Joker model was a fun little kit, and a good break from some of my other more time demanding builds.

Yet somehow! I still managed to turn it into a project of its own scale that I spent almost a month on. 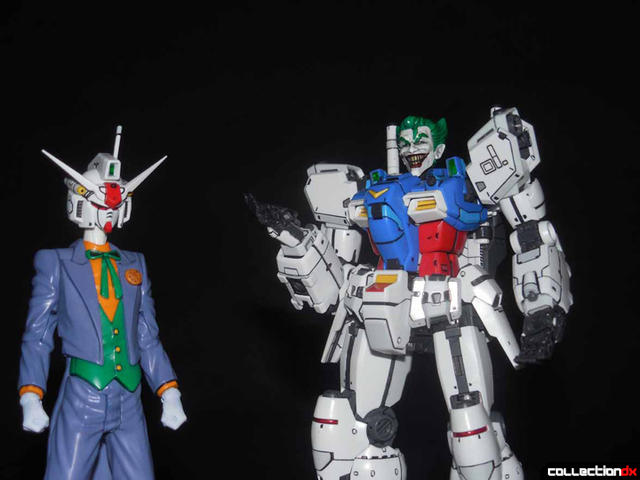 Also! I found out the head is slightly compatible with 1:144 scale Gunpla too! 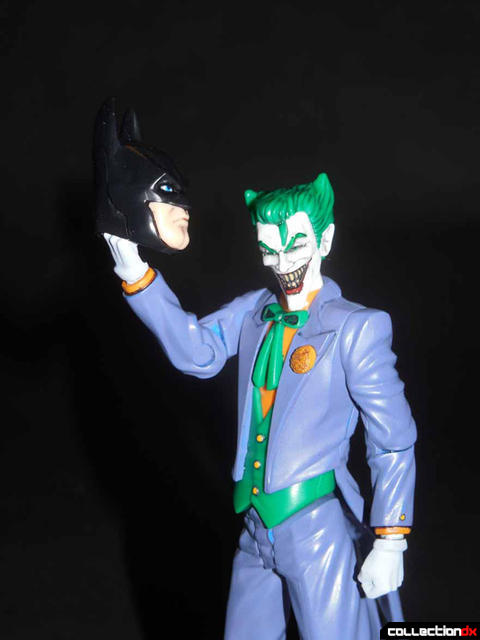 Well, that was fun! Who’s for Chinese?

Very cool! I've definitely been wanting to add more Joker stuff to my collection and this looks like a nice, cheap option that I wasn't even aware of, so I'm glad you posted this.

Thanks! Glad you liked it. Sprukits are really cool and more than just 'snap and build' kits, I would even say they're "GUNPLA" Grade and that says something compared to the last time I ever saw any so called 'action figure model kit' in US retail.