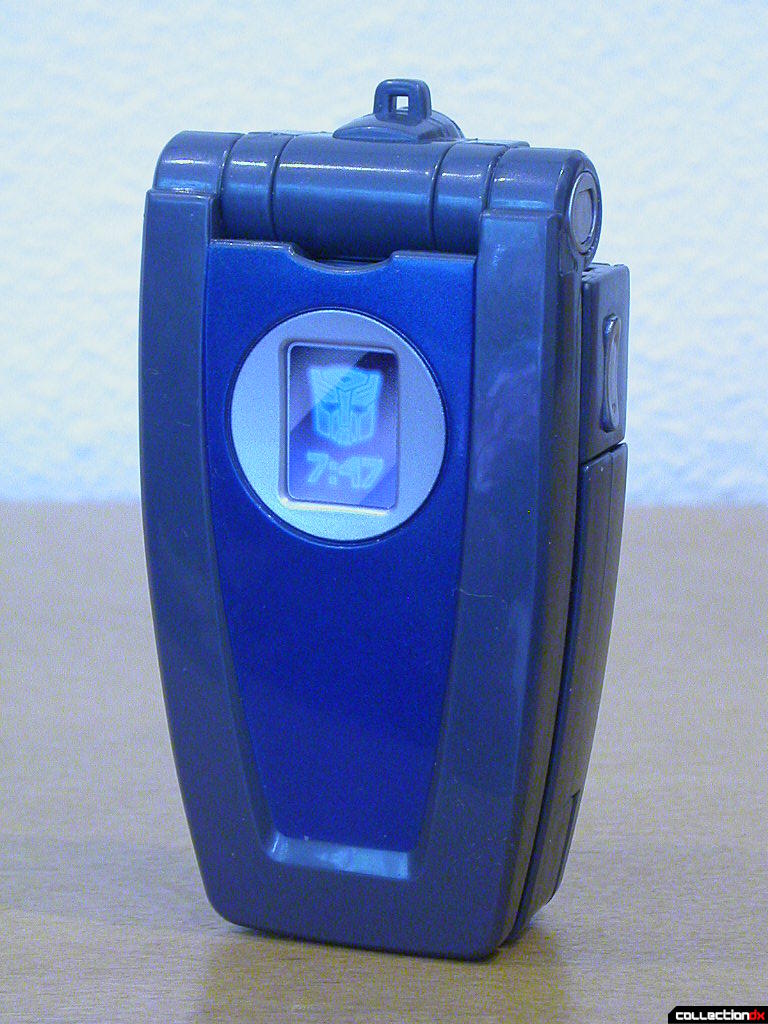 Speed Dial 800’s disguise mode (back) is that of a dark gray and dark blue cell phone. He has perhaps the most accurately-proportioned disguise mode out of all the Real Gear Robots series. Of course, with the size of real cell phones today, it’s kinda disturbing. He has a small display window on the front cover which shows a light blue Autobot symbol and the digital time 7:47. There are two non-functional buttons on either side of the cover joint for volume and the phone’s camera shutter trigger. There is a camera ‘lens’ on the back side right at the cover’s joint.

The ‘special feature of Speed Dial 800 is, well, opening up. Many of the familiar buttons are here, though non-functional- keypad buttons with alphanumeric characters, Dial and Hang-up buttons, two Option buttons above them, and a central button that I can’t quite figure out. The top cover section has, again, a large decal for the display window which shows other familiar phone icons- connection, battery capacity icon, Menu and Select options, Connect/Disconnect icon, and ringtone icon. A larger red Autobot symbol serves as the wallpaper. The digital clock inside, again, shows 7:47pm. An added molded feature includes the small vertical ear speaker at the top of the cover. 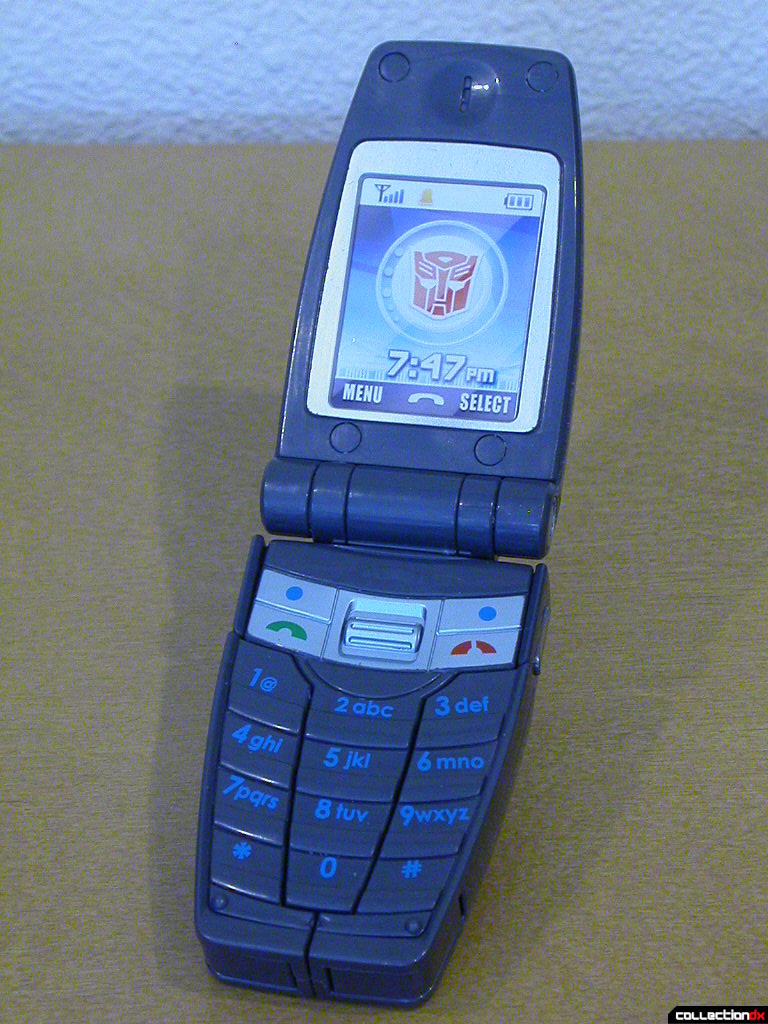 (In case you don’t realize it, the time 7:47 is in reference to the month, day, and year that the live-action film “Transformers” was released in the US- July 4th, 2007, or 07-04-07; promotional materials showed this as 7-4-7. Many of the other Real Gear Robots- though not all of them- have a similar homage on them.)

Transforming him is a piece of cake- very simple to understand, very simple to execute. The only complaint I have in the entire toy is in rotating those supports out of the bottom of his feet; there’s nothing to grab onto, and so you just have to press hard on them until they swing out. There is one big issue I must mention about transforming Speed Dial 800, and that is how his legs are positioned. The instructions contrasts the box art, which say that the fold-out sections on his feet are actually high-heel like parts. However, if you are to orient the legs the way they have it, then not only do the front of the legs have these huge gaps in the front, but the knee joints do not work. Now, even though he balances more correctly in this form, I prefer to reorient the legs ‘backwards’. This now makes the heels the front of the feet, and places that large gap in back, so he looks like he’s wearing knee-high boots instead. However, it has the larger advantage of freeing up his knees so that they function more like human legs. He also tilts forward a bit in a neutral pose this way to better balance the heavy weight of the top cover in his back. I have photographed him as such.

Since the Real Gear Robots line was inspired by events near the end of the 2007 film, but is not directly affected by it, and because of their relative size, there is no ‘Automorph Technology’ feature. No loss there. If anything, I don’t see how they could have incorporated one into Speed Dial 800, and I think it was good for them not to try it. 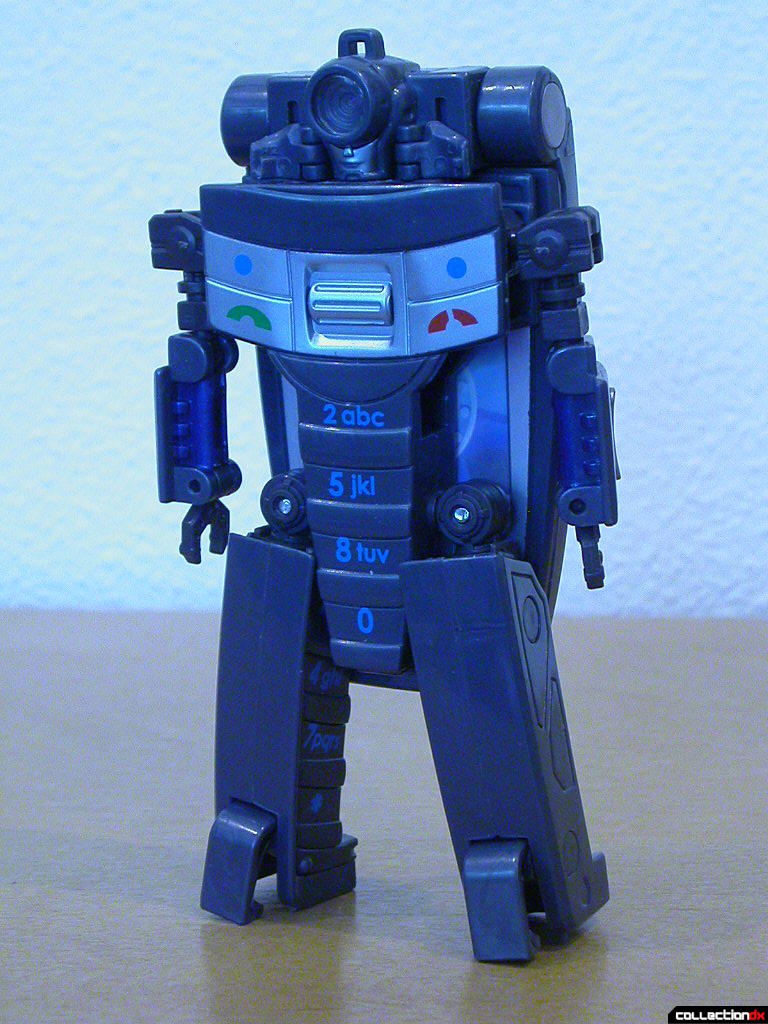 Speed Dial 800’s robot mode (back) fits into my “oddly-shaped-robot” list. He doesn’t have eyes, but the camera lens serves as one big Cyclops eye. It doesn’t work very well, though, since you can almost look under the camera lens part, and imagine it as more of a visor above the rest of his face. Actually, I thought that he looks better with the two face covers left closed. His arms are very tiny, and end in two-finger claws with a single-axis wrist joint. The main body is a T-shaped arrangement from the various buttons of the keypad. The legs, as I described above, look like knee-high boots with tiny upper legs just barely able to fit in the joints needed. The feet are hook-shaped, and I think they could have had them rotate differently. The top cover serves no function in robot mode other than as a big backpack. Unlike most of the figures in the Real Gear Robots line, Speed Dial 800 does not have his name printed anywhere on him.

Poseability is fair, though the proportions of everything make it difficult to find any good poses. His head is always facing forward due to that his neck only serves as the rotation joint for the top cover during transformation. Both shoulder and elbows are ball-and-socket joints, but his claws only bend up-and-down due to how he transforms. The legs are the most articulate, with two joints at the hips, and two at the knees, all free-rotate. Like the elbows on fellow Real Gear Robots Autobot Longview, Speed Dial 800’s knees are so close to his hips that they make little difference in posing. There is no distinguishing special feature on Speed Dial 800 in robot mode.

One other thing I should point out that took me by surprise was that all of the screws holding him together have been covered up! Even the screw holding the top cover joint together was both covered and painted. This is a very unexpected touch, but certainly appreciated, and adds all the more to the illusion that this is a “real” electronic device. So, aside from the irremovable pins in his hips, he has no visible screws anywhere!

Simple and fun. That is the mission of the Real Gear Robots line, and this toy accomplishes that very well. I can tolerate him, even though he is rather disproportionate for my usual tastes. While how his arms are stowed and unfurled is interesting, I would have used other parts of him to make bigger arms, and also some how utilized that top cover rather than just letting it hang off the back. Um… what’s up with the little loop on top of his head? Makes him look like a miner when the face covers are closed! The color scheme is rather plain, but, again, the idea is to make him blend in and not draw attention to him… as most cell phones are prone to do. I can easily imagine him just sitting on my nightstand, and then when I go to bed, him transforming and chatting it up for hours, pacing the length of the wood and waving his little arms about, before I go to sleep. Creepy though, like most other electronic devices will just up and change into little robots. The concept is a nice one, but the proportion of things in robot mode forces me to give Speed Dial 800 a mild recommendation. 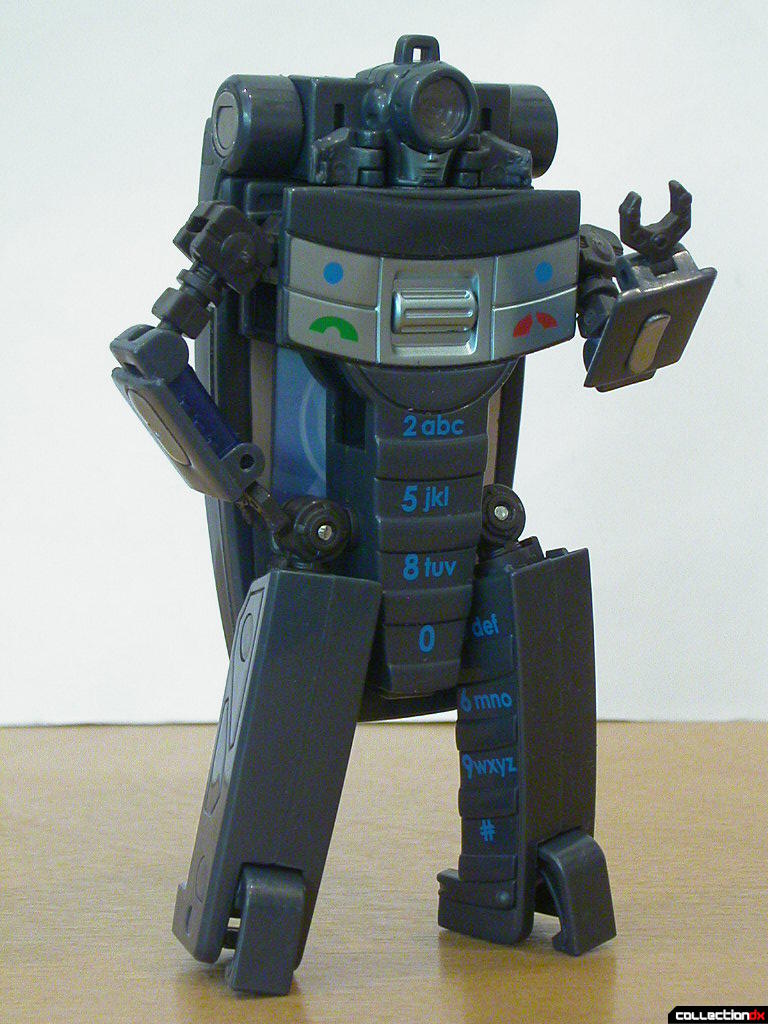 (There was a later repaint of this figure, called Decepticon Wire Tap V20, who was colored black, silver, and red.) 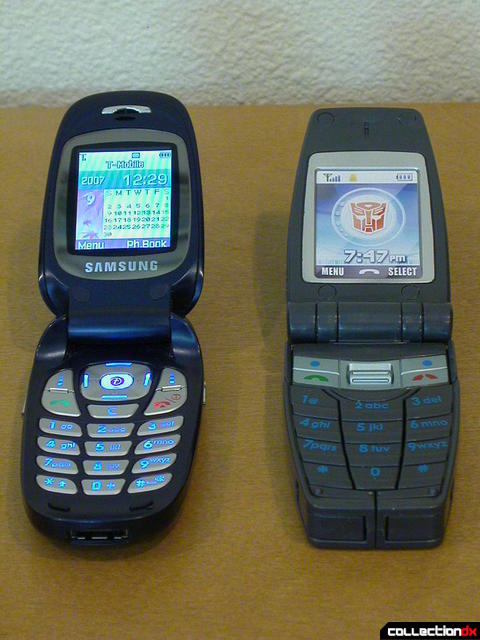 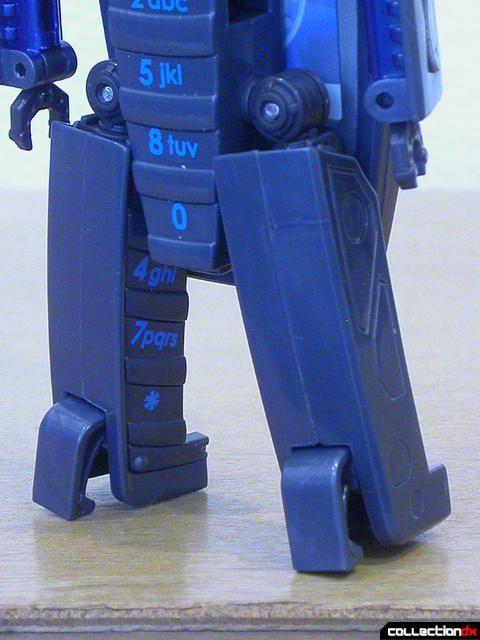 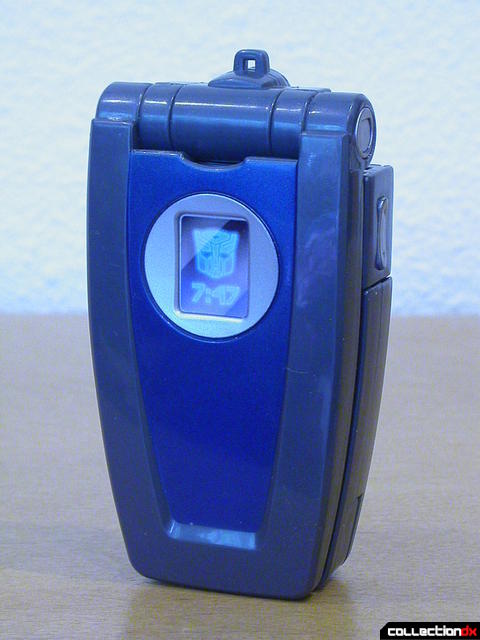 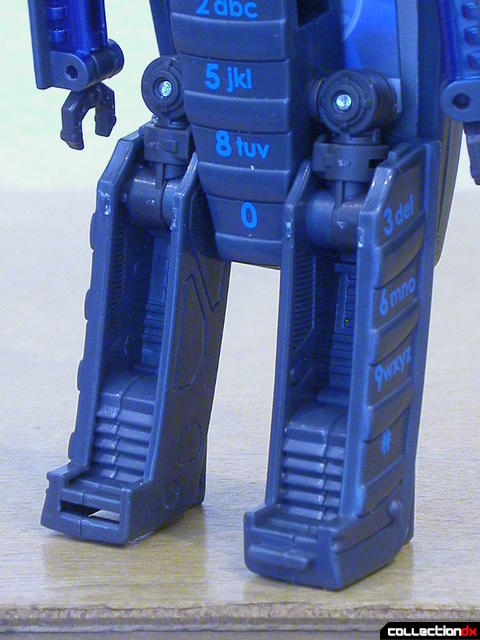 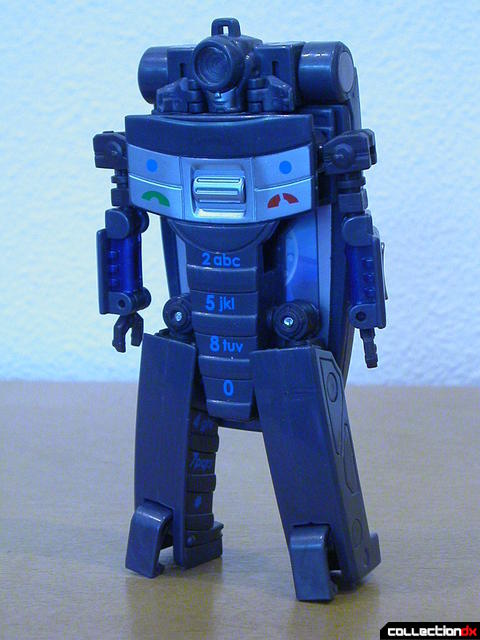 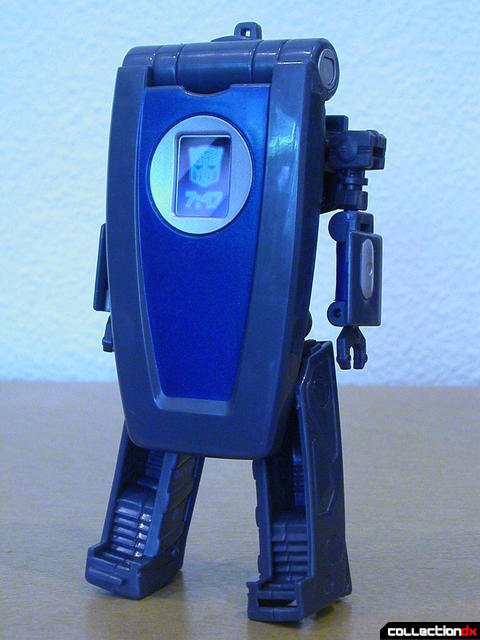 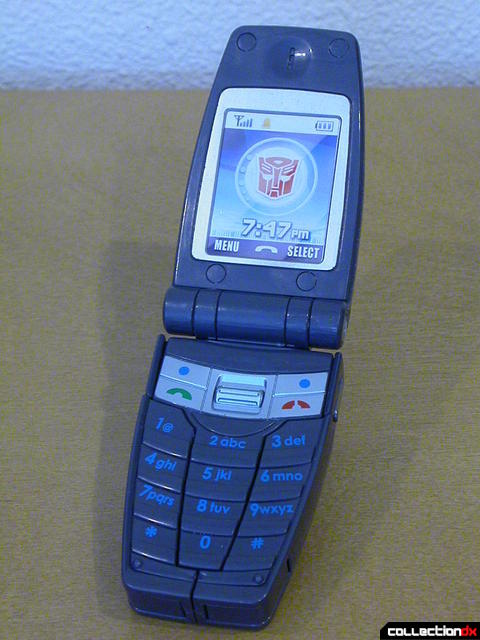 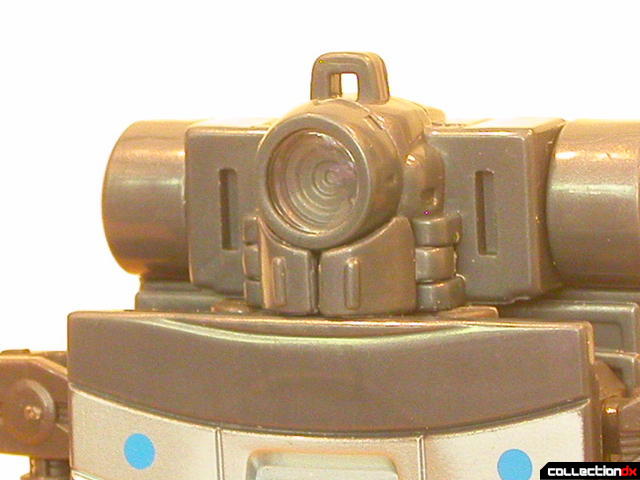 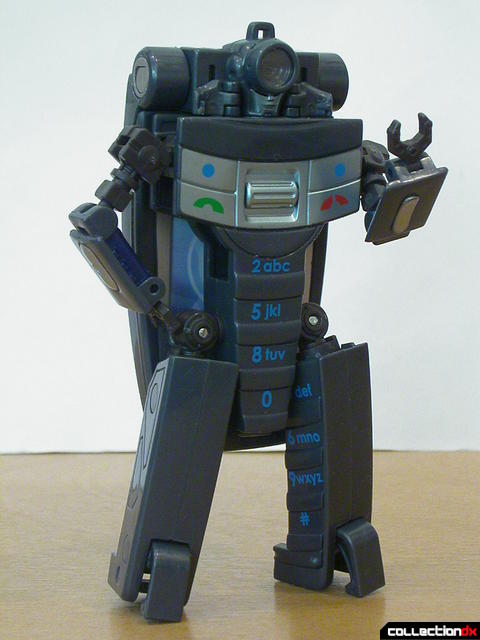 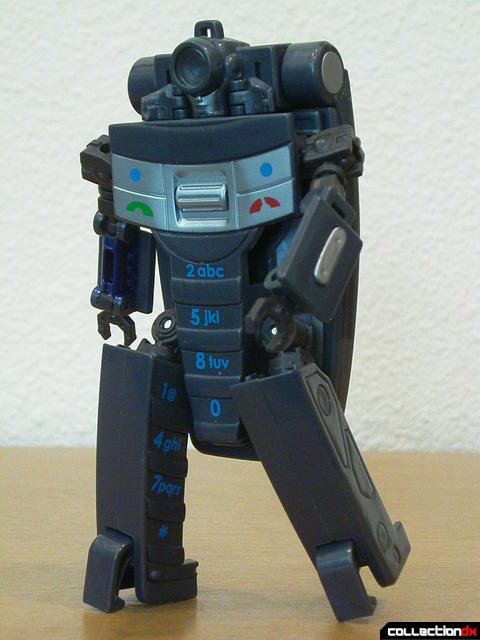 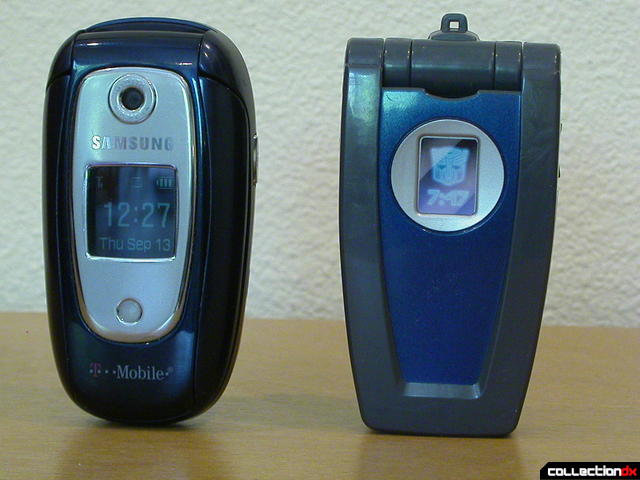 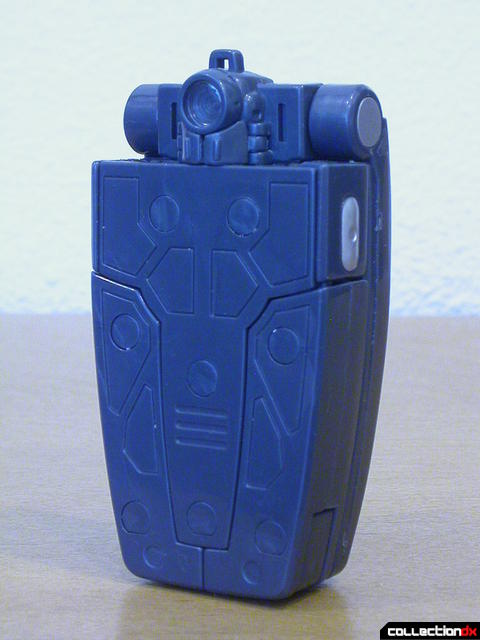 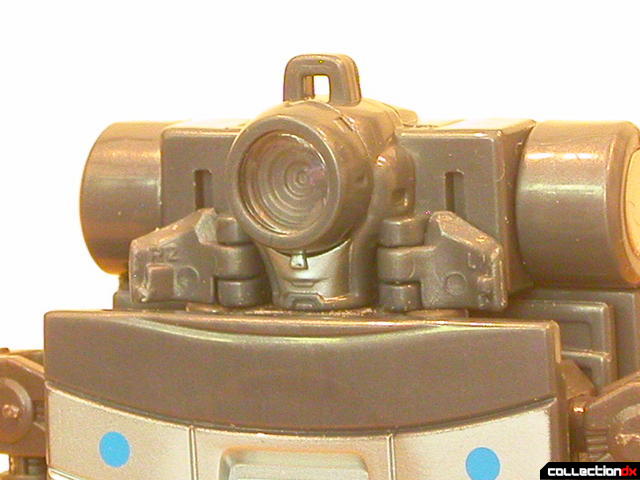