I was very happy to be able to tackle this review. I am sort of what you would call a "closet Godzilla fan". Well lately I've been stepping out a bit as evident by my last few reviews. This time I set aside the vinyls to take hold of a S.H. MonsterArts version of SpaceGodzilla.

This is the third release in the series. While not my favorite Kaiju, it is my favorite in the line. Yes, even more so than my beloved S.H. MonsterArts Godzilla.

Let's take a look and see why.

SpaceGodzilla comes in a bigger box than the two previous releases. It has a purple hue which we first witnessed at the Toy Fair when they had a mock-up box for this release. It has a nice matte finish to give it a high-end look. Even the tape used to seal the box is of the matte variety. 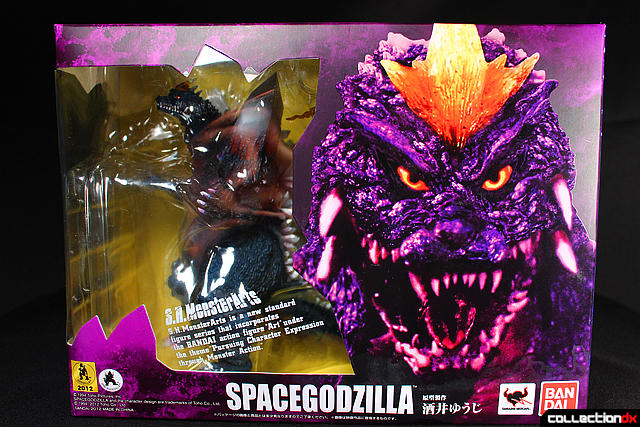 The back of the box has photographs of the prototype which oddly enough, does not do the figure justice. Aside from the obligatory Japanese writing, there is a small picture of the movie poster off to the lower right of the box. 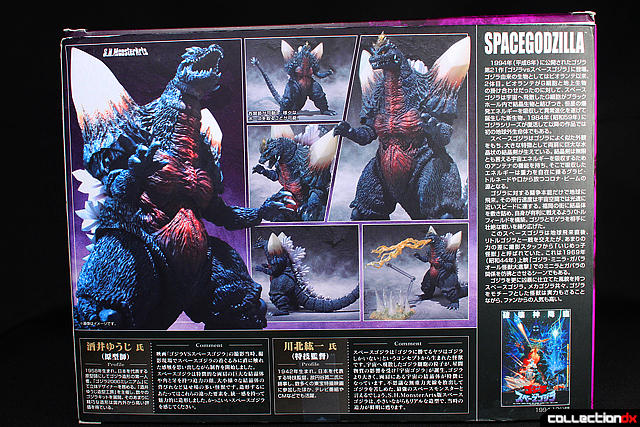 I know some people tend to throw away the boxes of the items they buy, but that doesn't stop Bandai from going the extra mile and applying some colorful reflective crystal-effect film on the box. 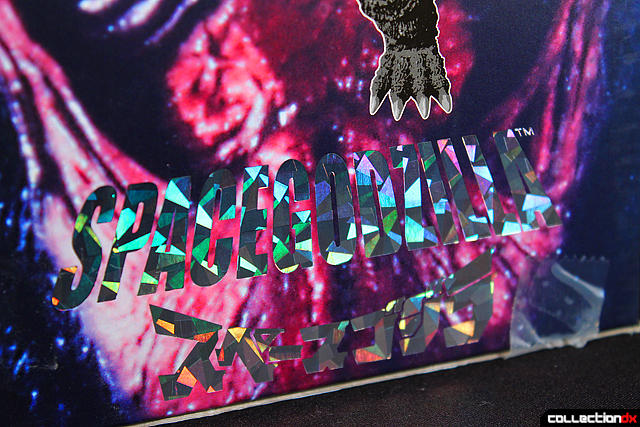 Once I took Space Godzilla out, I couldn't help but notice how substantial it felt in my hands. This thing is heavy. Normally when something weighs this much, there is metal to be found somewhere. Alas, there is none, but it sure does feel nice. This thing looks great! 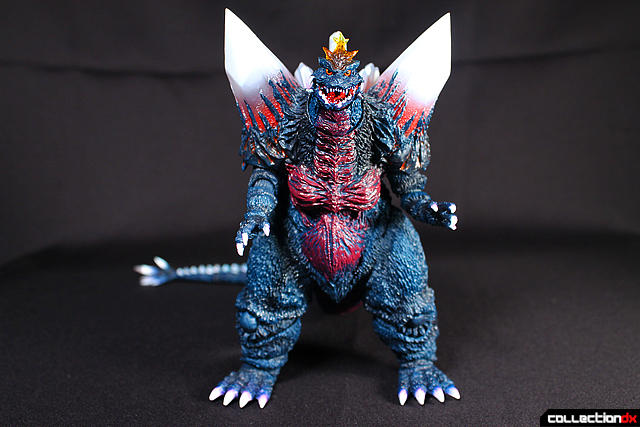 I did my best to capture the detail that Sakai Yuji carved into this figure, yet somehow it's not the same as handling it. 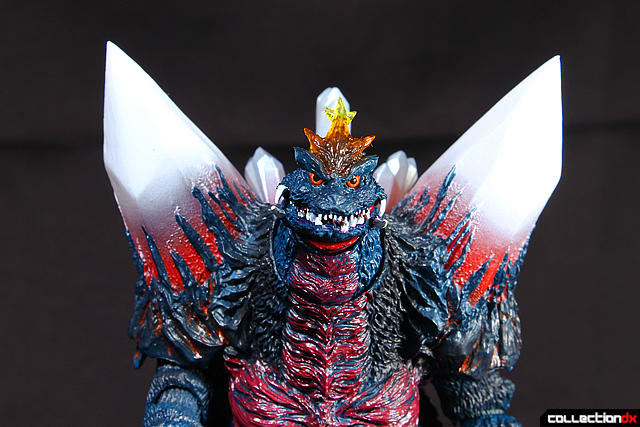 So much was done to the front that you would think they would get lazy with the back, but no. The back is just as detailed. The tail is very well done and the paint app on the spine is carefully applied. 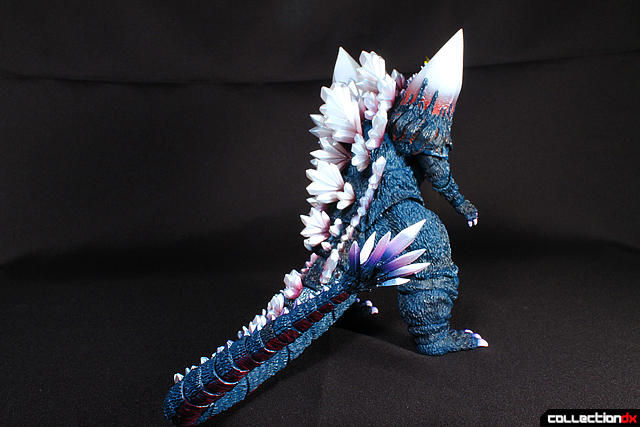 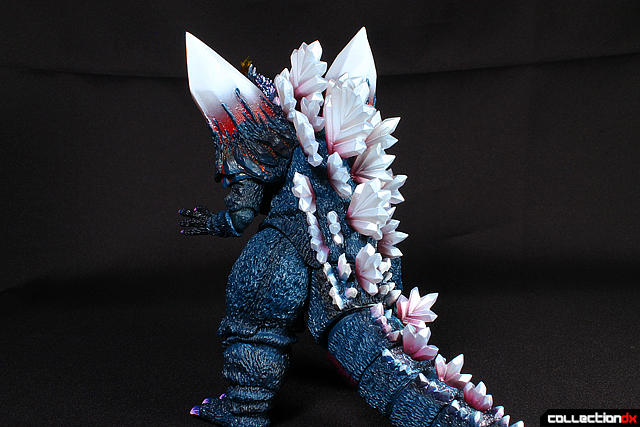 Speaking of the tail, it's HUGE! 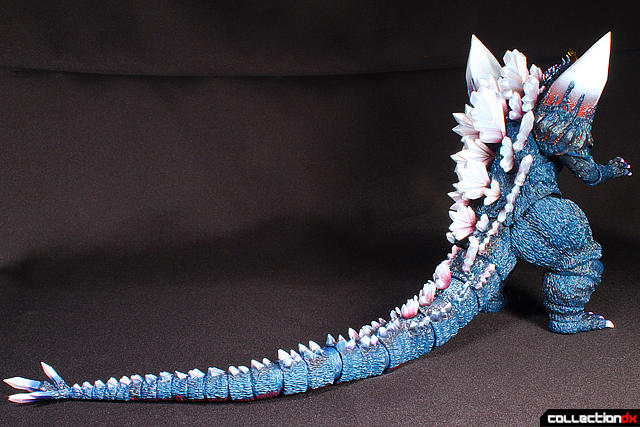 Very very articulated too as expected from all the segmented joints. Although not every single segment is jointed. Every other one is jointed and the ones in between each joint spin freely to allow an insane amount of realistic tail movement. 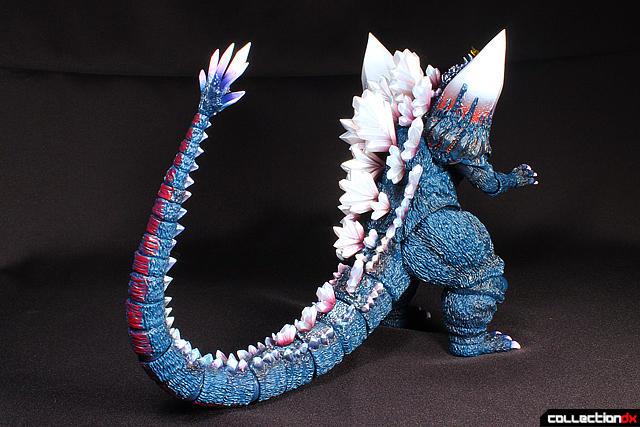 Because this is from the S.H. MonsterArts line, you can expect a generous amount of articulation. The neck is segmented to allow a good deal of movement. The opening mouth does wonders for the look of this figure. 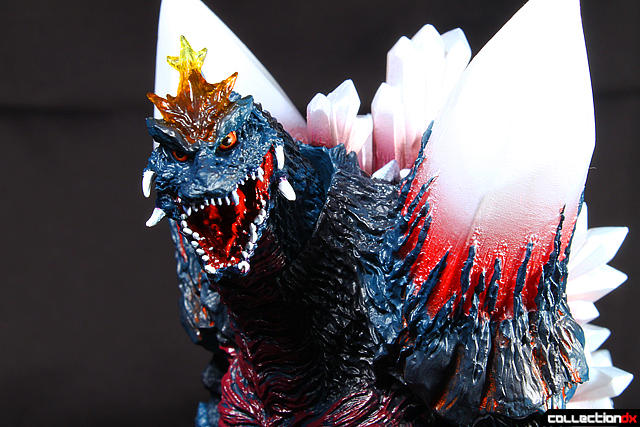 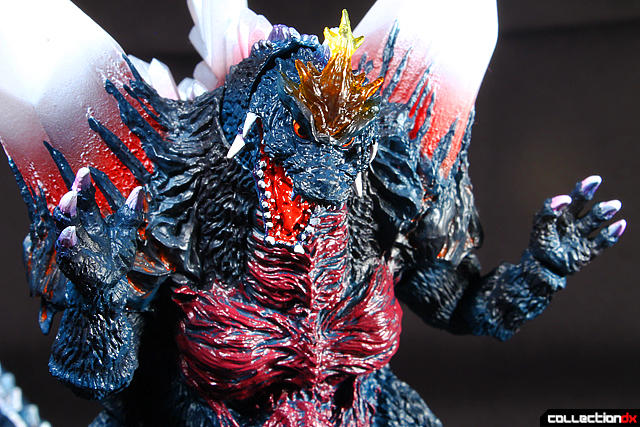 I noticed the legs on this guy do spread out a bit more than Godzilla which allows for some dynamic stances. 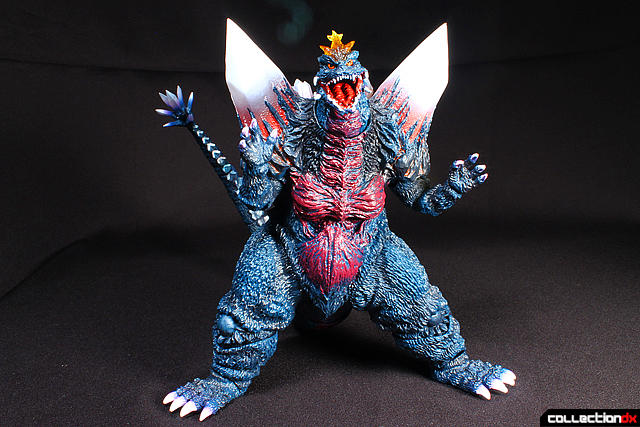 How many Godzilla figures out there can KNEEL?! 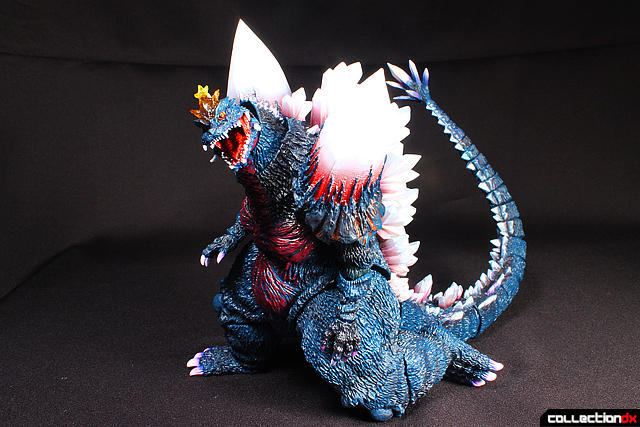 Check out the detail of the face and mouth. Each tooth is individually painted. I also love the clear plastic used on his head. My figure had perfectly centered eyes unlike my S.H. MonsterArts Godzilla which has a lazy-eye. 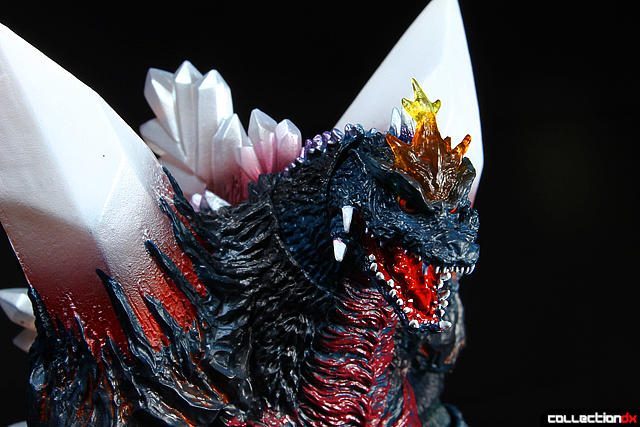 With the mouth closed, it is also perfectly centered unlike my Godzilla who has a crooked jaw. I guess what they learned from the first release helped improve this one. 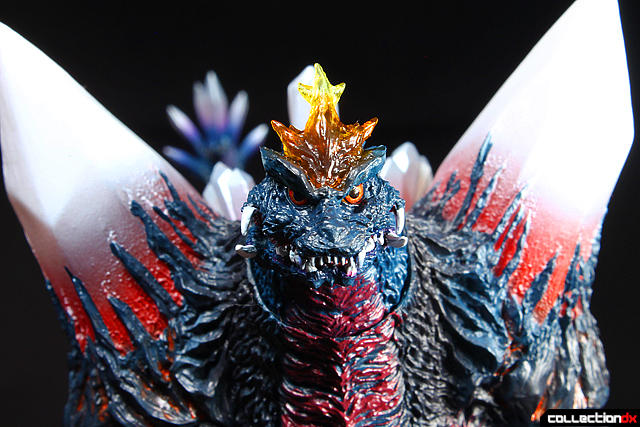 "Hey, are you guys making fun of me? 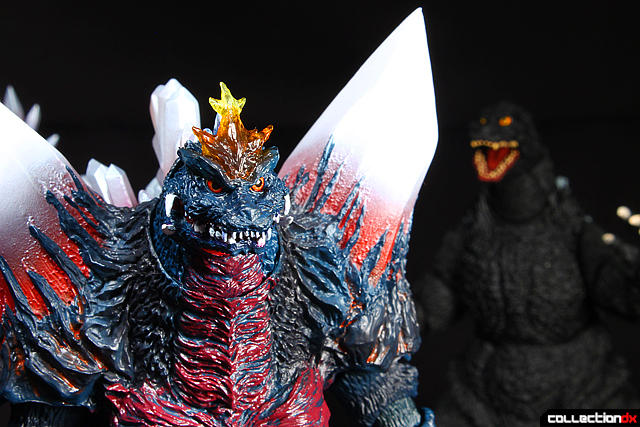 Godzilla ends up being a tad smaller and lighter than SpaceGodzilla. Then again SpaceGodzilla has huge solid crystals on his shoulder. 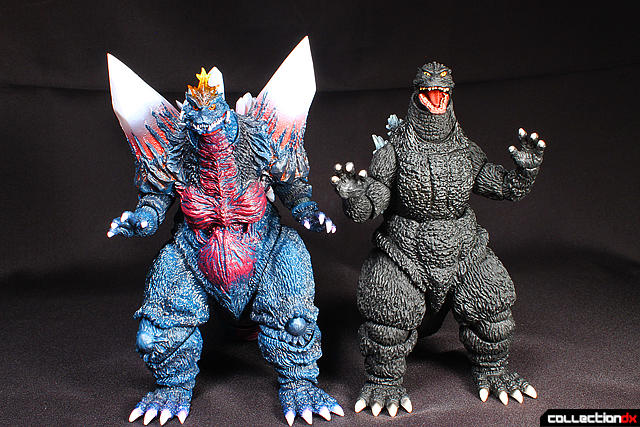 Let's not forget the power gimmick that is included with this set. I'm not much of an effects-parts guy but I can always appreciate the inclusion of these parts for fans of this stuff. It's called the Corona Beam and it's painted in a metallic yellow. Included is a section of crystallized ground as the base and a clear adjustable stand to hold the effect in place. 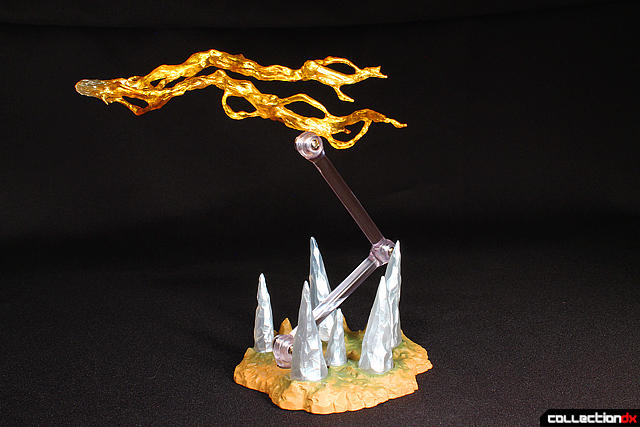 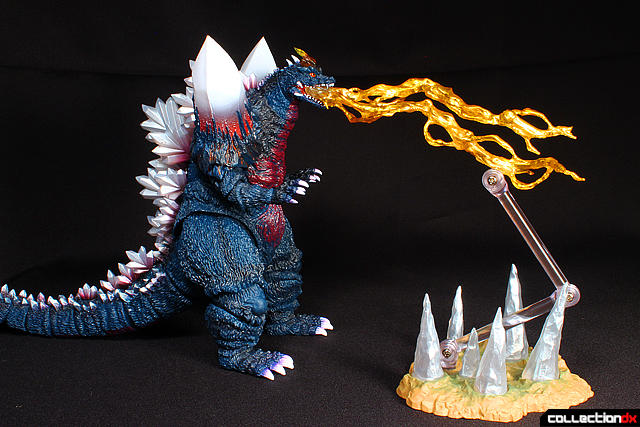 To use it, simply line it up to his mouth and let it rest there. Nothing fancy going on here. I'm a sucker for LED gimmicks and they would work great for effects like these. 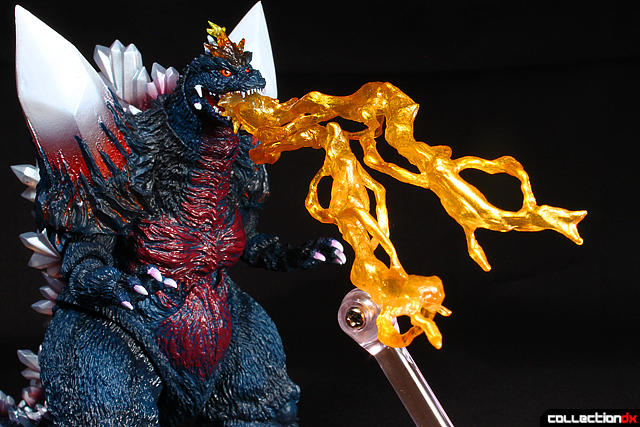 It was kind of hard for me to remain neutral during my review as evident by my enthusiasm for this figure. It really is a great release and again, I am not a fan of the SpaceGodzilla character. I have some forgettable vinyls, but this release really woke me up to this character. Nicely executed. The only drawback is it's price.

Then again, when is anything we buy cheap?

I think this line is great I own godzilla and when I got it in hand I was immediately impressed with the detail and articulation. this space godzilla looks just as good. Though Im personally not interested in this one It confirms that this line will get better and better in their execution. Heres hoping we get some future previews of prototypes to come.

On a side not if you think this figure is hefty the soon to come king ghidora looks to be even more massive!!!

Yeah, the Ghidora looks INSANE. I saw a picture of it next to the Godzilla and I need it. Problem will be where I'm going to put it. Might make a nice hood ornament

Great job on this review. The photos really show off the amazing colors. The only reason I am not buying these is I have no room left at all. Otherwise.......

just saw the preorder price for king ghidora all I can say is damn 124 before shipping its insane no way I would pay that much...

I just opened up mine and it has 3 crystal spines on his back that are barely glued in! One big, one medium and one small sized. Luckily, they all have thick posts to slot back in, but I need them to stay put! Other than this fixable issue, the toy is fantastic.

I want to use a very strong glue that dries clear and will keep them attached. Any suggestions? :(

Anyone got any ideas? ^