At the time it seems that everybody was manufacturing or bootlegging Fang of the Sun Dougram figures in 1985. Revell was releasing Dougram 1/48 and 1/72 scale under the Robotech Defenders monikers and Dougram action figures were available at big chain toy stores even though America didn’t even have the luxury of the cartoon series on TV. That’s just the way it was.

One of the more fun and affordable releases for the average 13 year old were a set of six multicolored one inch tall figures known as “Space Puzzle Fighters”. But if you have a sharp eye you will recognize three of the Puzzlers as Dougram, Roundfacer, & Crabgunner. These were available through local candy shops and mobile ice cream vendors for what I can remember 25¢ each. 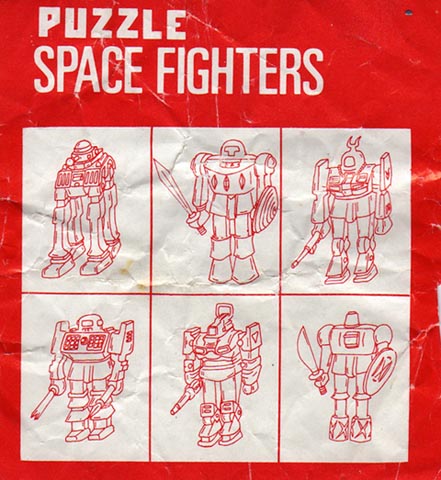 What was so great about these was simply the affordability of Space Puzzle Fighters. With just a few dollars you could assemble a huge army of these toys. Also, the fact that they easily came apart and reassembled, one could assemble custom figures in various colors and configurations. 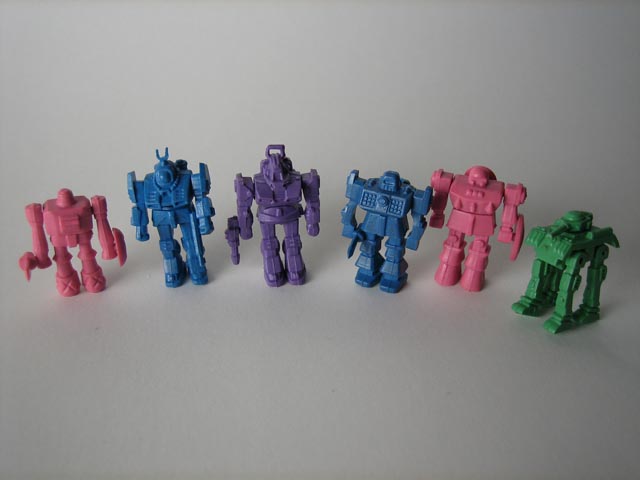 Although three of the SPF were from Dougram the other three figures, to the best of my knowledge, were generic robots. My favorite release is the Chogokin style faceless pink robot with the footless Astro Boy legs and pirate sword and shield. I would love to have that one in DX grade!

Sure they are bootlegs but to this Chogokin collector the Space Puzzle Fighters still bring back many fond memories of the early days.

Nice! I had a "roundfacer" of these. I loved that little guy, and have been meaning to hunt him down in my box of memorabilia buried in the garage. It's so funny to see that someone else rememberes these things. Great little contribution!

I had a Super Valkyrie from Macross very similar to these as a kid.

Thanks, I have many fond memories of these figures and it's great to know that I wasn't the only one that held on to theirs! This was the gateway drug for Chogokins!

"We'll fight them on the Beaches!

We have a sealed case of these in the collection. I can snap some pics of it if you want to add them to the review. I'll just need to locate it and dig it out of storage.

I also remember, as a child, getting these from a local (now long gone) small convenience and candy store called Treasure Chest. My brother and I would go there and get these, bubblegum cigars, and another similar set that consisted of small plastic toy airplanes you could assemble. Both toys came with a smarties-like candy. I can still remember its distinct taste. Sweet and fruity.

The robots themselves came in blue, pink, purple, green, and I think a darker blue. Then one day when we visited, they also had neon orange and I think neon green, so they did come in many colors. I loved those robots. We used to take them apart and swap pieces around to make our own robots. They were fun little toys, and my introduction into the world of Candy Toys.