If Grimlock is the angry child-king of the dinosaur kingdom and Sludge is the special needs Dinobot, Slag is the pyromaniac. Sure, Grimlock set things on fire with his mouth. In fact, all of the Dinobots did. But Slag's JOB TITLE is flamethrower. Could you imagine his résumé? "1985-2005 - Me Slag burn things. Sometimes, me burn Decepticons. Sometimes, me burn Autobots, but that on accident." 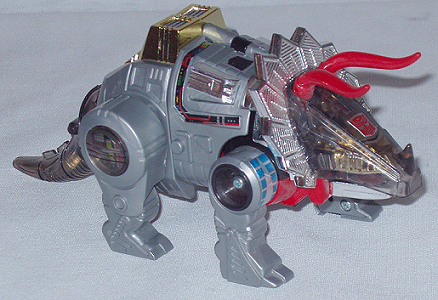 I think this quote from the two part episode Desertion of the Dinobots really sums up Slag's personality, "Me Slag no like anything." This was another one of those Transformers I never had as a kid, so I definitely don't have the nostalgia for it the way I do some other toys. Stylistically speaking, Slag also shares a lot with the other Dinobots, including the diecast metal, vacuum metallized chrome, and my favorite, the clear parts that show chromed plastic underneath them. Slag's transparent dinosaur head especially looks great with its gold robot skull plainly visible. 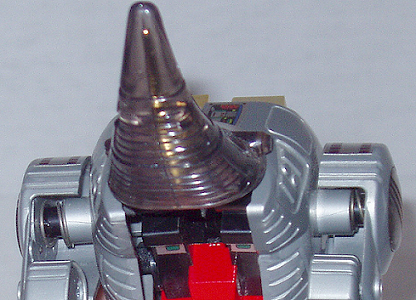 Slag has a really nice triceratops mode that is much tougher than most of the Dinobots. There's really nothing you can break off except the horns. Slag's robot mode is similarly solid, but there's a bit too much crap hanging off of his back and ankles. He comes fully armed with an energo Sword, the electron blaster handgun, and a rocket pod with several rockets. Once again, if you are getting the US version, the launching mechanism is crippled but it is fully functional in both the Diaclone and Japanese Transformers release. 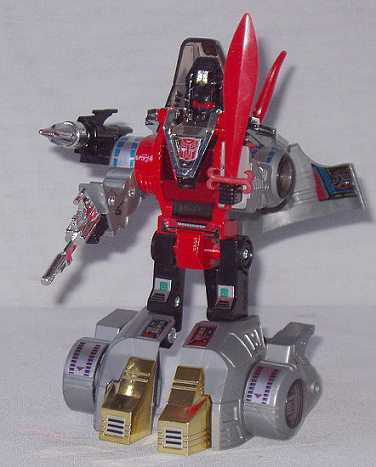 Like the other Dinobots, Slag was originally a Diaclone Dinosaur Robo and because of that, there's space for Slag to carry an "Inchman" pilot figure. The cockpit is kind of awkwardly placed and doesn't really work in triceratops mode because you can't see it, but it's okay for robot mode. 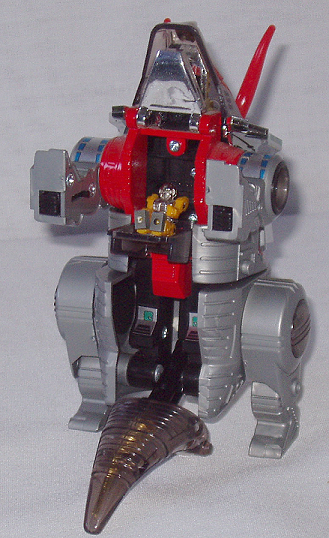 I like that the designer chose to hide the robot mode head inside of the dinosaur's mouth. It's a transformation trick that would show up again in later toys, but it was an interesting choice at the time. The dinosaur mode is also a lot more convincing than Sludge's brontosaurus and has not really been rejected by contemporary paleontology.

Thankfully, it does not have Sludge's crappy legs either. Slag is not the greatest of the Dinobots but he looks great in dinosaur mode and pretty good in robot mode. Another plus is that this toy was reissued in Transformers: Generation 2 with its original color scheme and two more: red and a snazzy green color scheme that I actually like a lot. Trust me, they look great all standing in a row. If you get just one Dinobot, should it be Slag? Probably not, but it's still nice and worth snagging. Besides, who are you kidding? You're a collector. You want all of the Dinobots. (C) 2010 Jeremy W. Kaufmann & CollectionDX 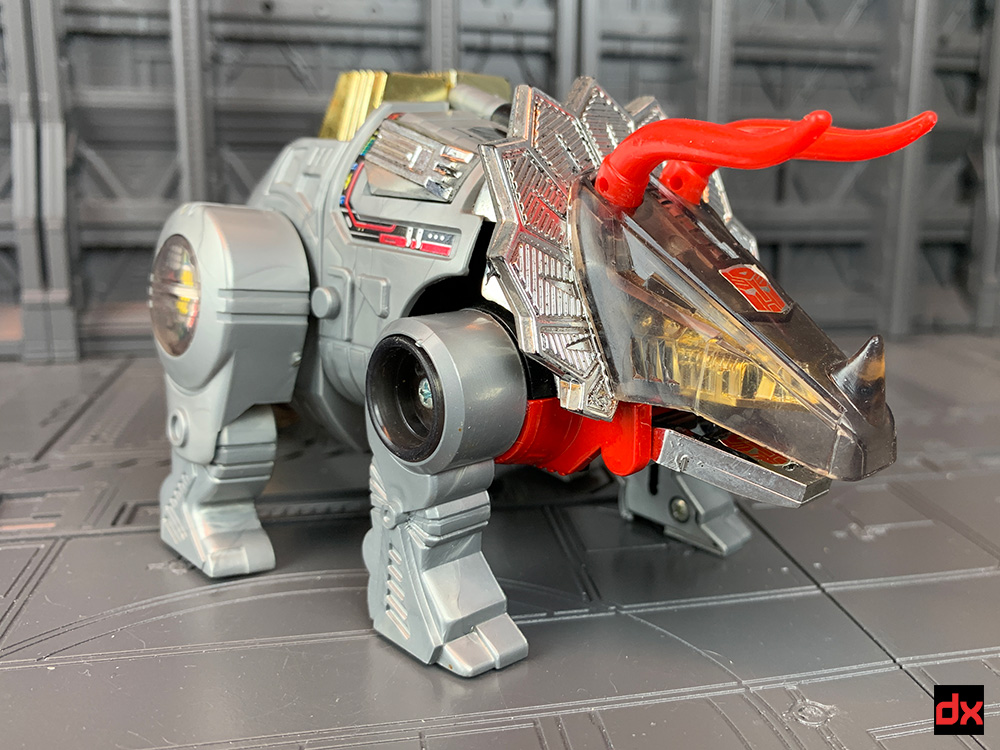 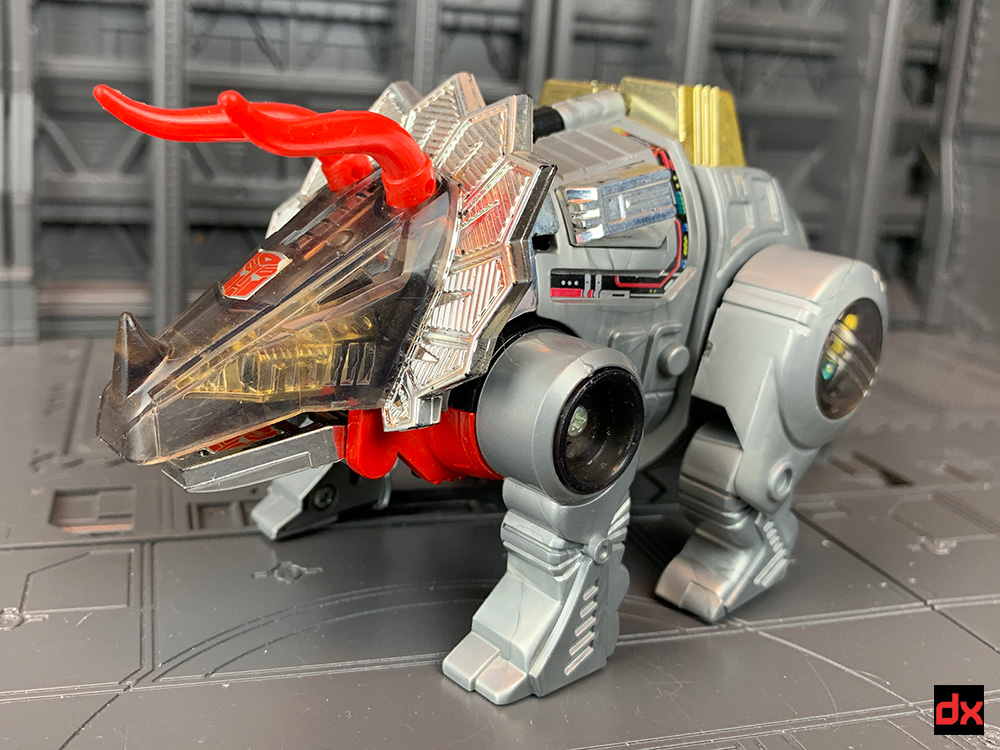 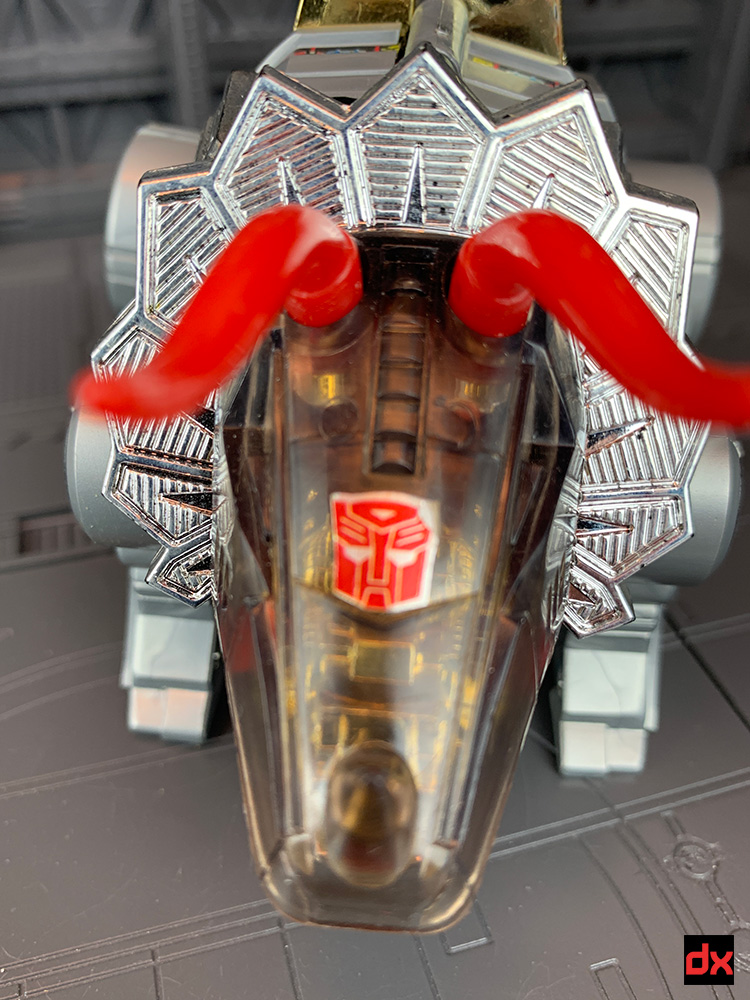 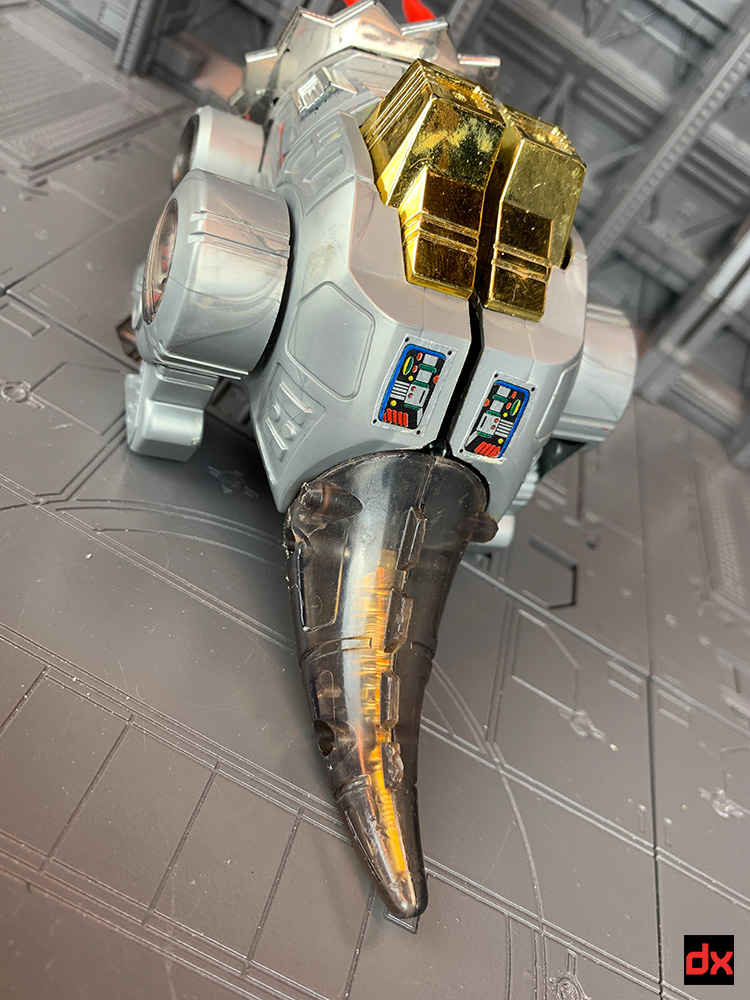 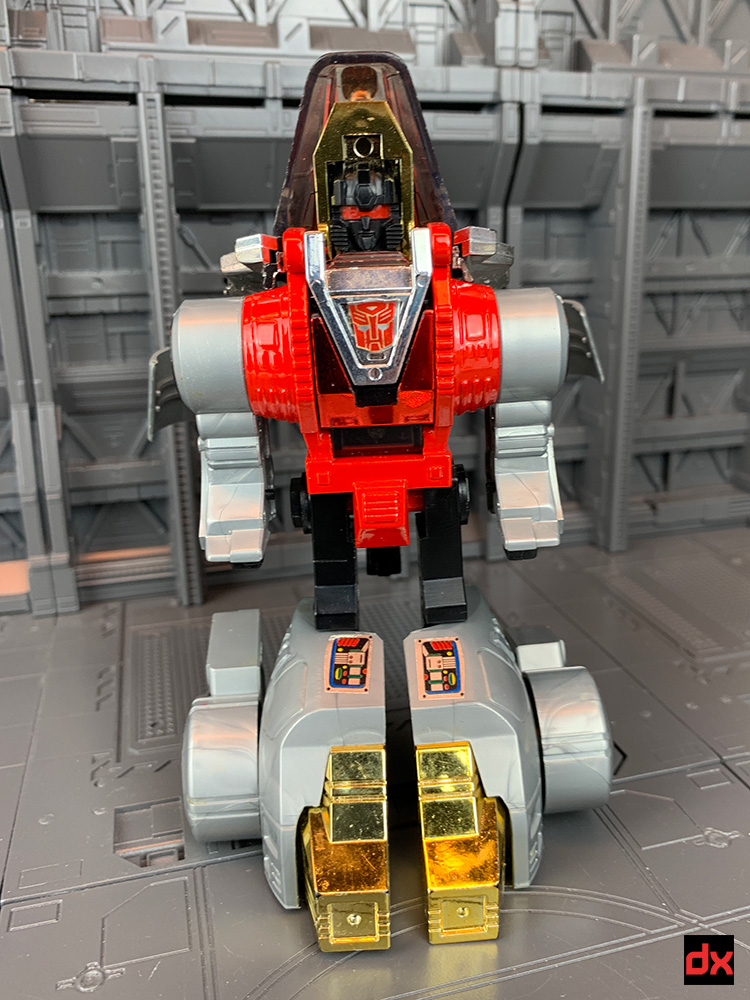 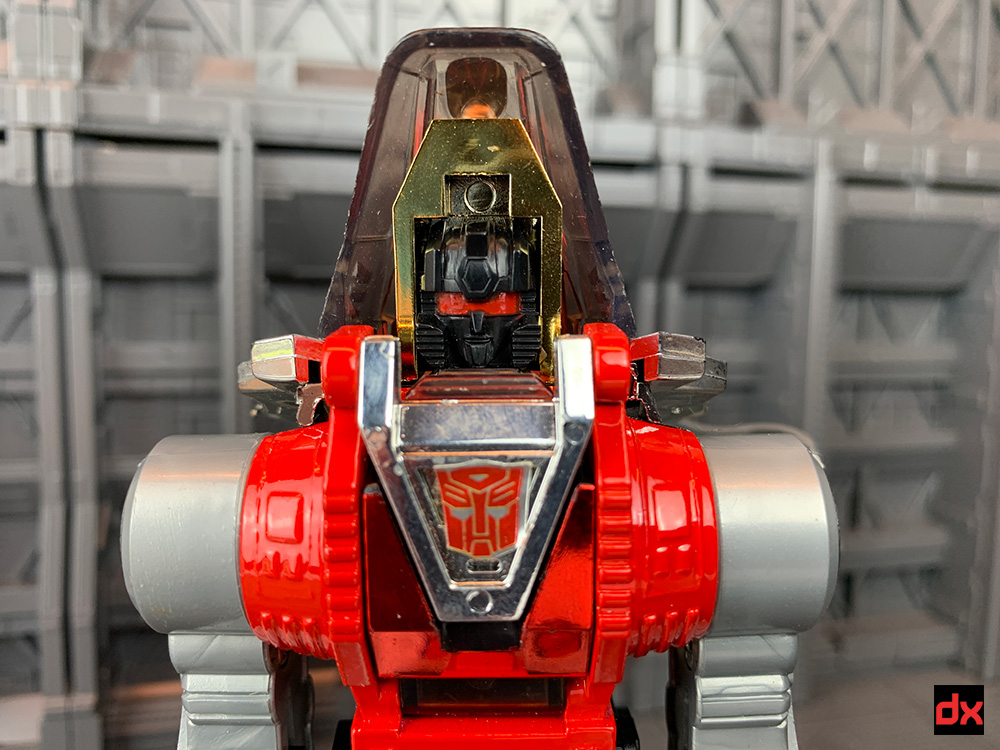 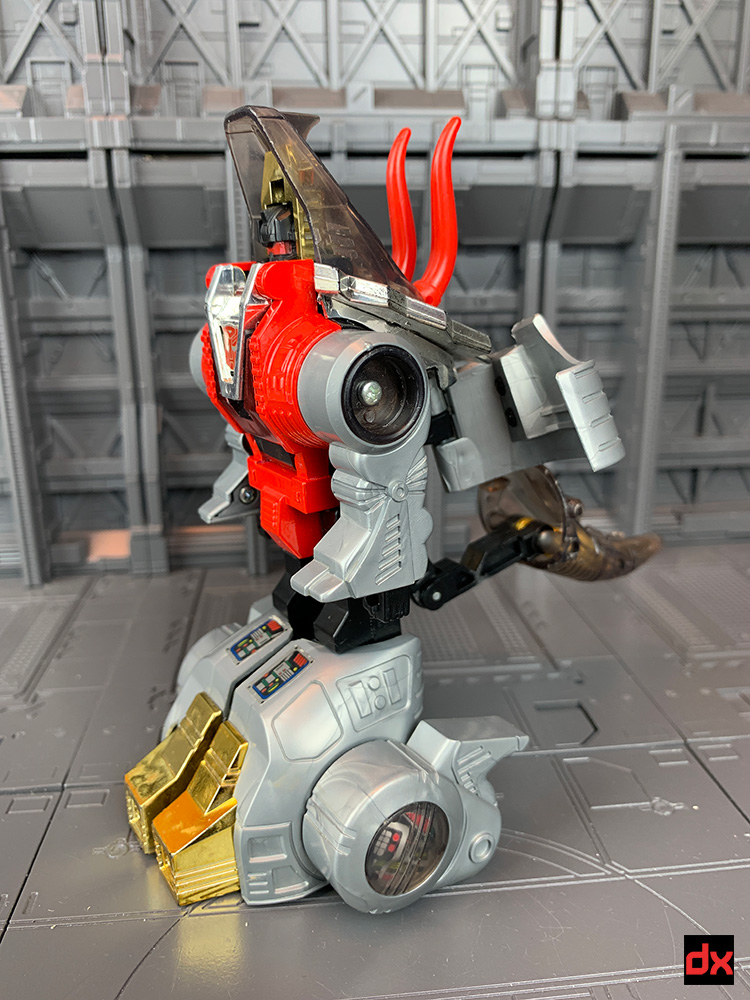 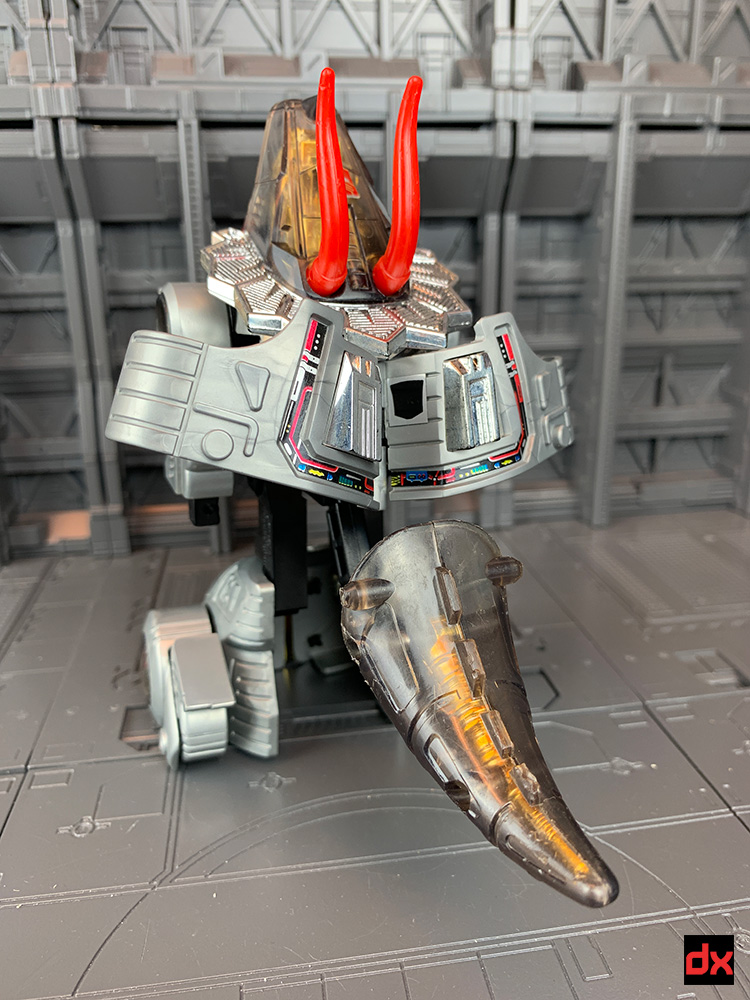 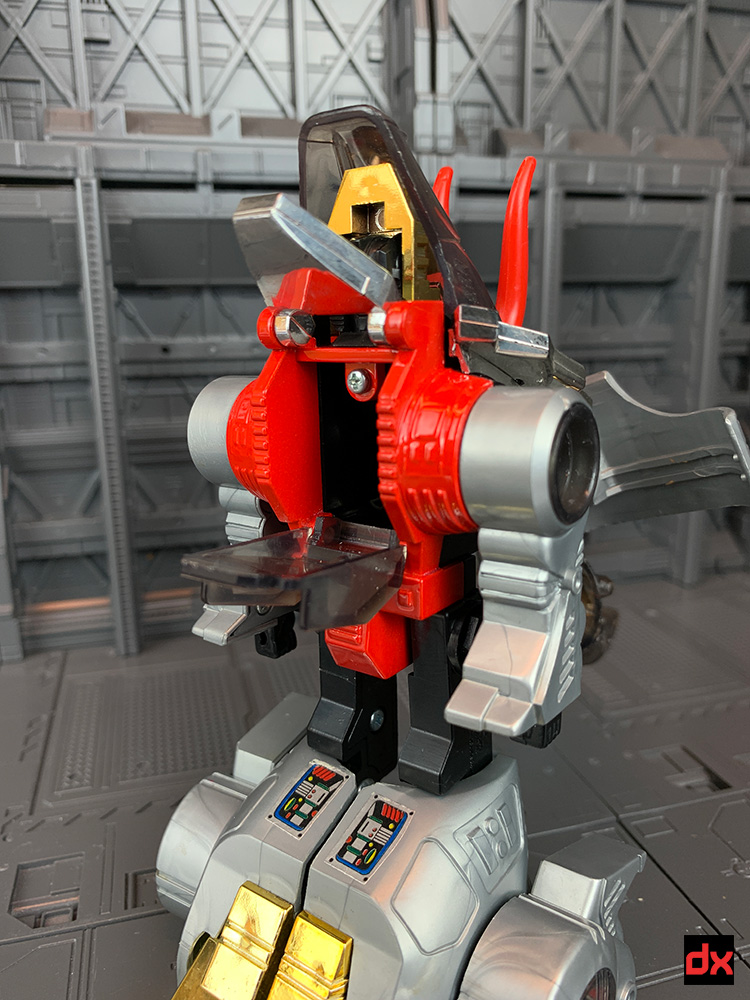 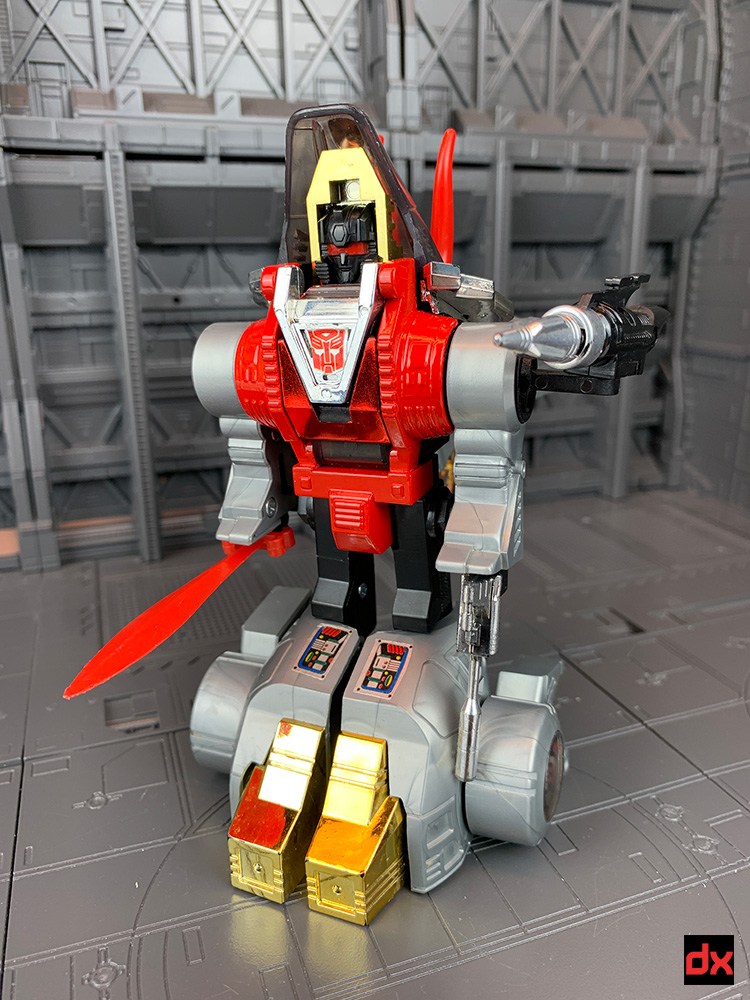 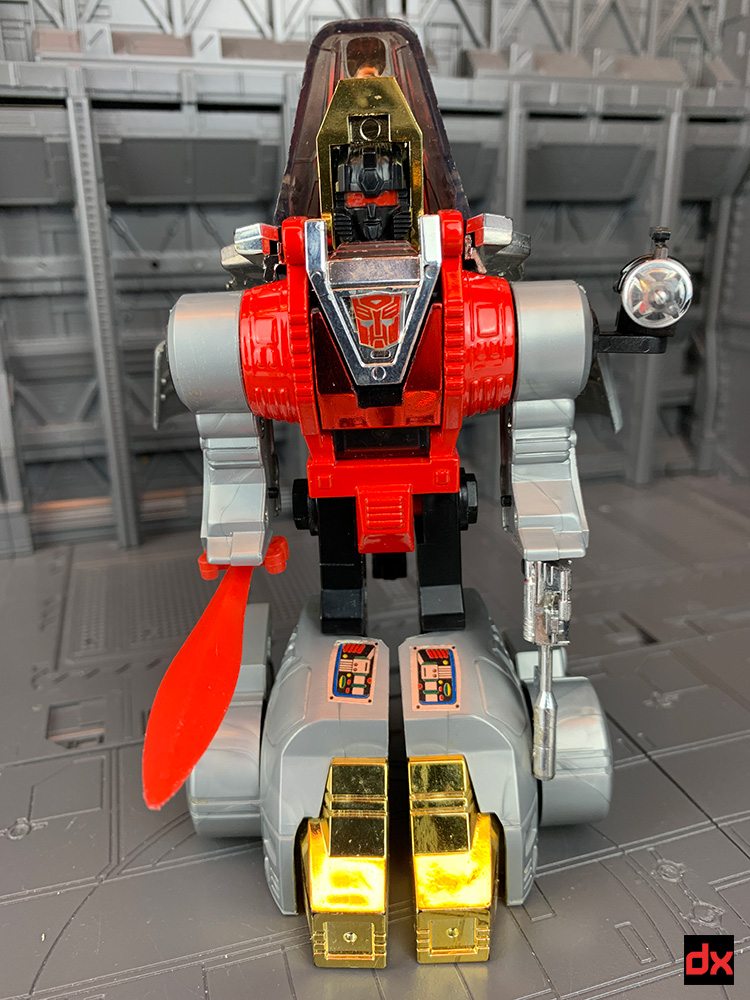 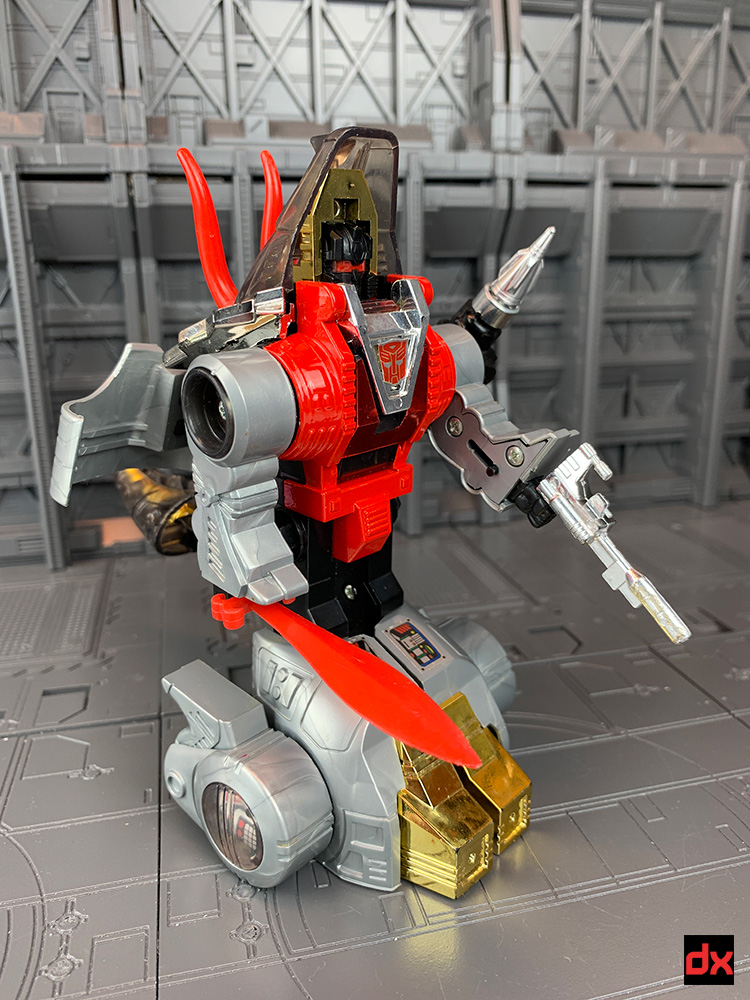 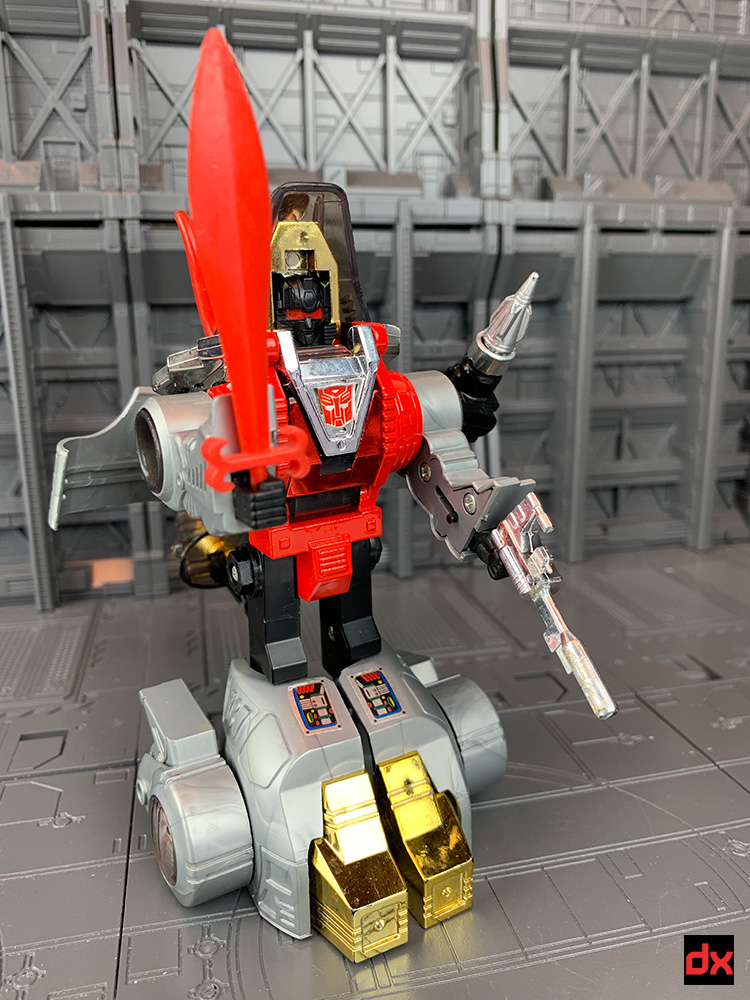 The dinobot toys were really great, unfortunately I can't stand their on screen characters. When the masterpiece Grimlock was announced I was seriously disappointed, I sure hope the next masterpiece isn't based on a dribbling idiot.

I think Slag still wins in the category of the cutest Dinobot though.

Slag was my first dinobot, and the only one of the original three that I ever had. I loved the toy and loved him on the show for his raw belligerence. He always seemed like the dinobot with the least regard for good or bad; he just wanted to burn stuff. I don't know what that says about me as a kid.

I do have to take issue with the concern over breaking the horns off. As I recall, they are pretty soft plastic (like his sword) and also swivel freely. You'd have to really try to break them off, and while I managed as a kid to break half of Snarl's head and one of Swoop's wings, Slaggy was always rock solid. I do remember spending a lot of time lining the horns up straight, though. So I guess if I was a pyromaniac as a kid, I was also a very anal-retentive one.

Look, I don't know what to tell you. When I was a kid, I totally broke a horn off my cousin's Slag.

Of course, I broke basically ALL of my Transformers as a kid to one degree or another.

Say, may I ask what happened to the rest of the comments? I could've sworn I've posted a question. I hope I didn't come off as disingenuous--did I?

I removed something else and looks like I accidentally took yours with it. My bad. What did you ask?

Yeah.. all I said was that I've felt kind of confused when you replied to Prometheum5 saying that Slag is a good toy, but Sludge and Grimlock are better. The reason for my confusion is you said the review that Slag is better than Sludge in regards to it's realism in dinosaur mode. Then in the next paragraph, you said that "Sludge" is not the greatest of the dinobots but he looks great in dinosaur mode and pretty good in robot mode. Another plus is that this toy was reissued in Generation 2 w/ apple read and green?

G2 Sludge in red and green?.... My 1st question to you is were you referring to Slag or Sludge?

My other question is that in what ways are they better than Slag in your opinion? Do you mean that they're both badass in Robot Warrior modes w/ weapons or something more? Your clarification would definitely help my confusion sir.

Ohhhh. My bad. I meant Slag was available in red and green. Let me go fix that.

now I understand what you meant by that. BTW, don't feel low about the error. We all make errors too. I've typed the word "read" which is supposed to be "red" from my last comment. Even the best of us make mistakes & rectifying them is a testament of being the best of champions.

You sir are that champion which makes it honorable. :)