Gwyllm Griffiths comes from the episode "The Sixth Finger", from the first season of The Outer Limits, and aired on October 14, 1963. The story concerns a dumb peasant boy who allows himself to be subjected to some evolutionary experiments that basically hurl him thousands of years into his "biological future". In other words, he doesn't actually travel through time himself, but his body undergoes the changes of the species as it advances through the generations, one of those changes being the addition of a sixth finger, for added dexterity. The entire episode is viewable online.

Gwyllm Griffiths is another one of those figures that I never cared much for until I actually owned it. On the surface, it doesn't look that spectacular. It's just an egghead with an extra finger on each hand and a boring all white costume. But perhaps because of it's almost antiseptic appearance, the figures really stands out from the rest of my monster toys. Perhaps moreso than any other figure I've got, this one just screams "SCI-FI" more than horror.

As you might expect, the head sculpt is once again phenomenal. Even if they weren't set so far back into the skull, I think those eyes would show a depth rarely seen on a toy. There is some real emotion in these eyes, from sadness to arrogance and contemplation. 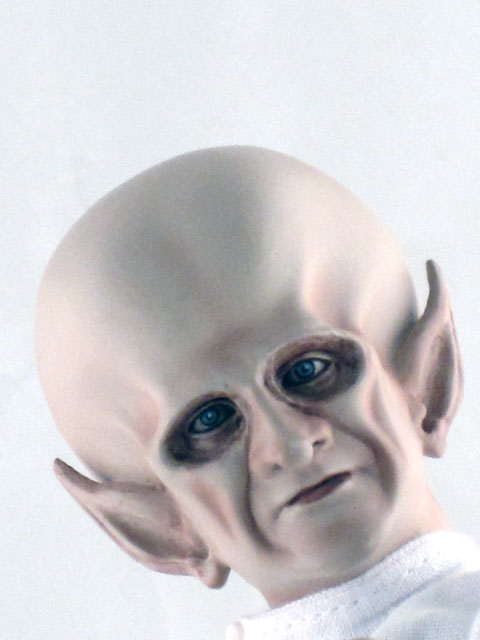 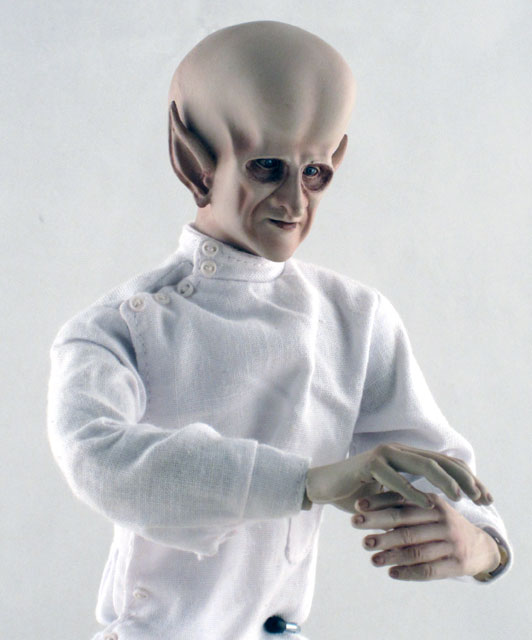 Unforunately, perhaps because he has just a bald head, the seam lines across the top of the cranium is a bit more noticeable here than it might be on other figures. Still, it's not a huge distraction.

The hands are unremarkable, excepting of course, the addition of the sixth finger on which the episode is named. The costume, a simple white patient's uniform, is well made and features buttons along the right side of the figures torso. These buttons appear to be old fashioned from the outside, but underneath has metal snaps. A pocket is also sewn into the left breast. The pants have no real distinguishing characteristics to speak off and the black shoes are removable. All in all, it seems to be an accurate representation of the character from the episode. 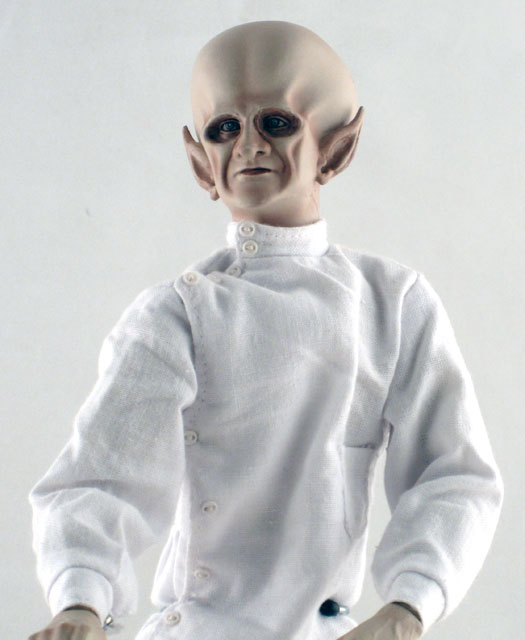 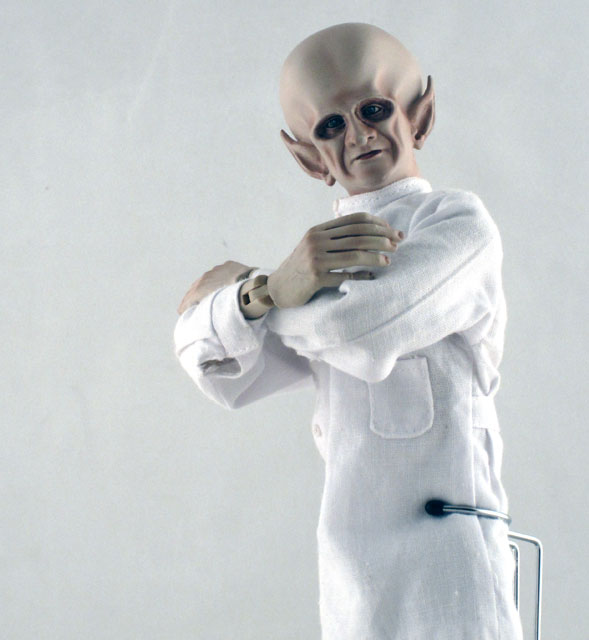 The only accessories included with this figure are two books: "Descent Of Man" by Charles Darwin and "Bach: Preludes For Piano". They are rather large so I don't bother displaying them with the figure, but he can hold them if you so desire. 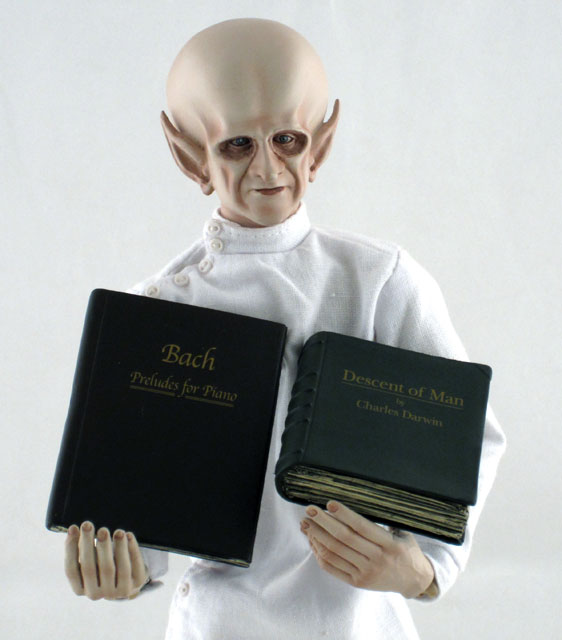 The packaging matches the other releases from the line. A black and white photo adorns the front cover with pertinent episode information on the inside flap. 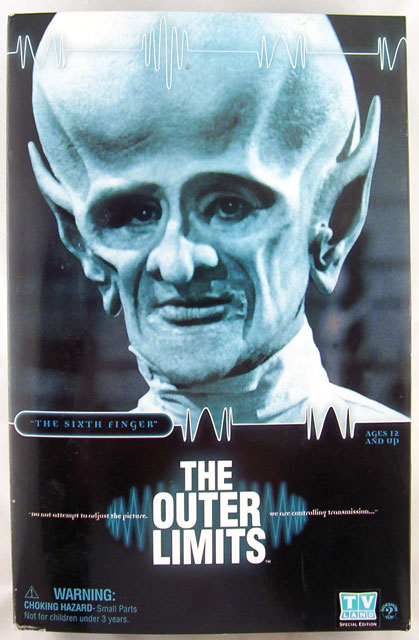 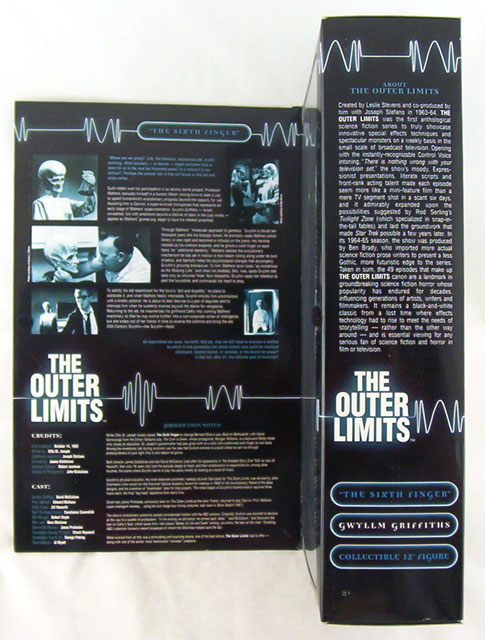 Although he's using the "wrong" finger, the image on the back looks rather, uh, dismissive. Who knows.. maybe customs, and hand gestures, have also changed 10,000 years in the future. 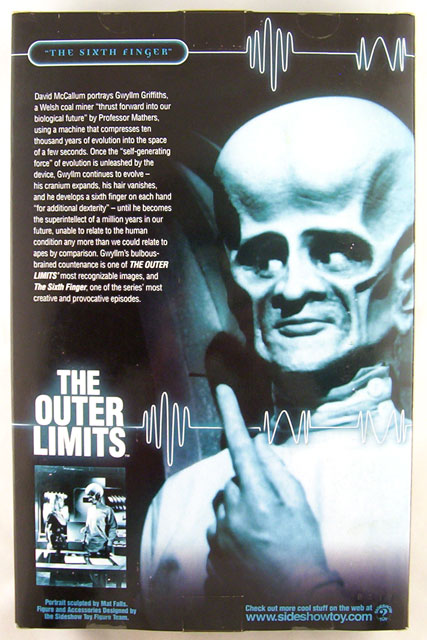 The more 12 inch figures I see, the more I realize how far toy technology has come. Not only did I like the figure especially the head sculpt but I even watched the whole episode. To think that this series was aired back in 1963. It's a pity TV has become so crappy. Thanks for reviewing this gem and keep up the good work.

Glad you liked the review (and the show). I'm not sure how much this figure reflects progress in toy technology as the only 12" figures I have are all from the same era and are all, for the most part, about the same. I don't have any vintage Joes or anything to compare them to. But with few exceptions, I've been pretty happy with the ones I've got.

Hey, I just got this and the Sideshow Twilight Zone Gremlin for Christmas. It's a great figure, but I like my Gremlin more, because he's more fun to play with. (BTW, Biff Bang Pow's Gremlin sucks eggs.)

Oh, and he's using his INDEX finger on the back photo,not his "wrong" finger. (Something I couldn't figureout, though: does he have two pinkie fingers on each hand now?)