Through the annals of Transformers toys, there has been only one toy dubbed the Ultimate Transformers Challenge. Sixshot was a legend at the playground. For a kid, a robot that turned into something was always awesome (or radical), but a robot that turned into five different vehicles was an impossible dream. To this day Sixshot has remained largely unchanged through his myriad of appearances in Transformers media. There is something about this figure that many people find prolific. Does Sixshot deliver the goods? Let's find out. One thing I must point out is I got this figure secondhand and I he did not come with his twin rifles, but the figure is perfectly fine without them. 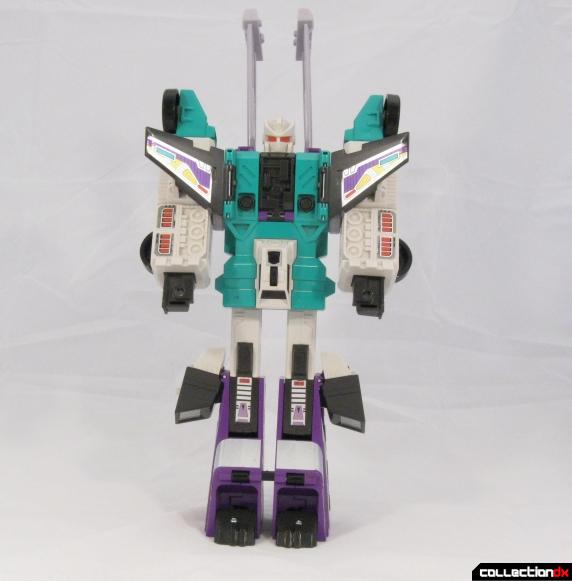 Sixshot is a large toy. Around a foot in height, he looks and feels like a solid toy. Unlike his Autobot counterpart, Quickswitch, Sixshot is almost completely devoid on articulation. He can only rotate his arms at the shoulders, and even then you have to move his chest wings out of the way to allow his arms to rest parallel to the ground. This figures combination of colors and stoic stance make for a toy that successfully straddles the line between looking cool and being functional. That is to say the solid blocks of plastic he is comprised of work well together without the need for painted details. 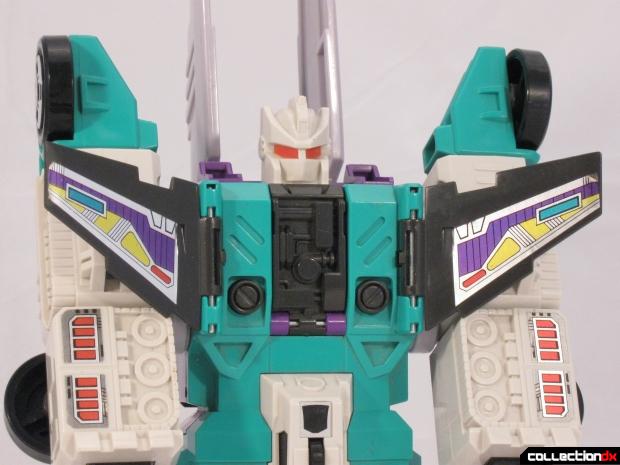 The details of this figure are surprisingly good. The paper stickers are well crafted with lots of complementary colors and designs to the bare plastic. 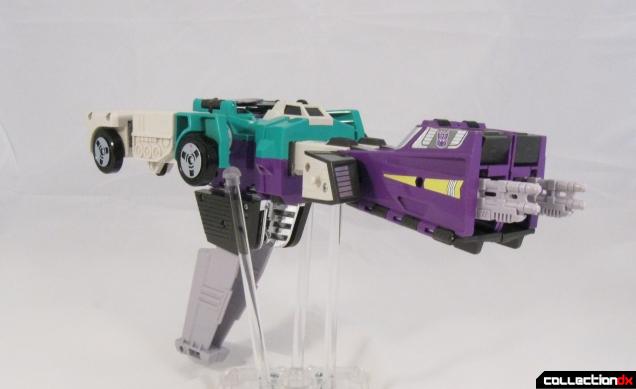 In laser pistol mode, Sixshot is fairly sizable toy gun. The handle is more than adequate even for adult hands. This figure comes with a pair of dual flip out guns in each leg so that without the rifles, the gun mode still looks like a weapon. 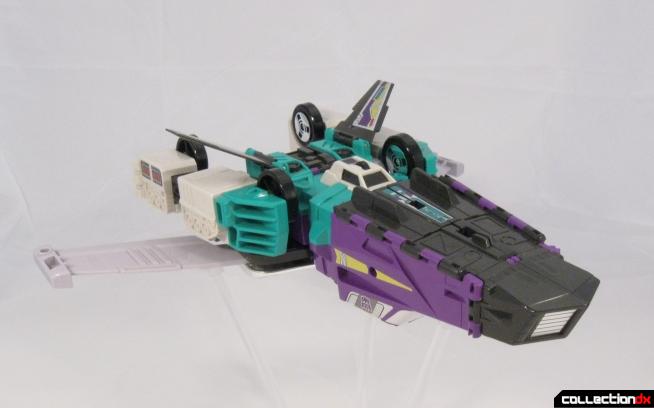 Sixshot's next mode is a space fighter. Drawing heavily from what was contemporary sci-fi designs, the whole thing has a very Star Wars or Buck Rogers feel to it. Despite its blocky look, it still looks sleek enough and the small cockpit completes the effect. 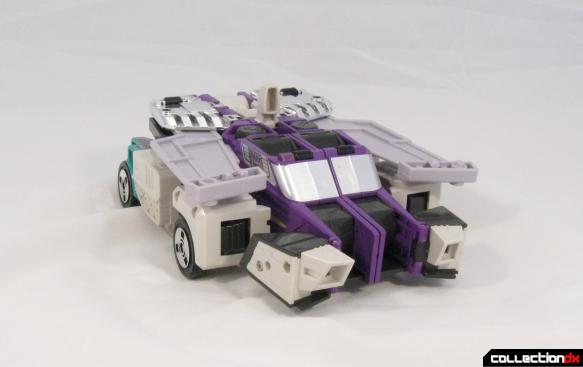 As you could probably tell from his robot mode, Sixshot's familiar car-front shins allow form the front of his "armored carrier" mode. In this form, Sixshot looks right at home with the sci-fi cars that would come to dominate the late Generation 1 era of Transformers. It rolls along on a total of seven plastic wheels. 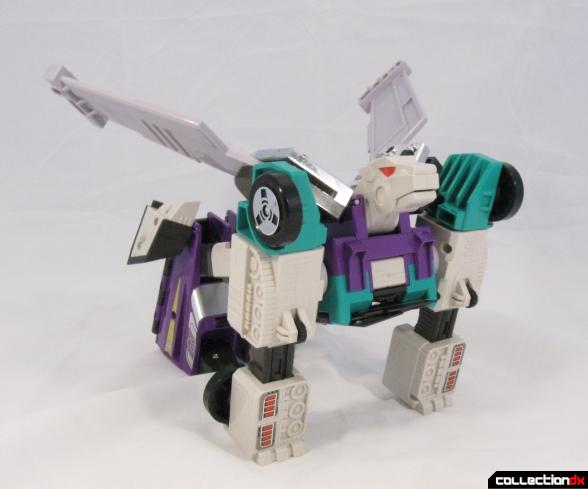 One of Sixshot's more infamous modes is the Winged wolf. Looking like one of Generation 1 Predacons, Sixshot takes the form of a mechanical beast with his robot mode limbs serving as as his wolf form's haunches. He looks somewhat fierce, but I can't shake the feeling that his big blocky feet and large form makes him kind of cuddly. 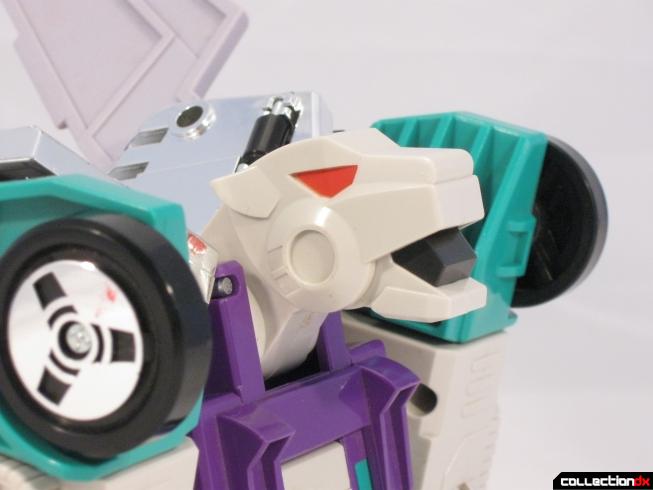 The wolf head is nicely sculpted although it doesn't appear to be very canine like. Its sort of just a generic robot animal. Still the moving jaw is a cool feature. The lower jaw forms the cockpit of Sixshot's next mode. 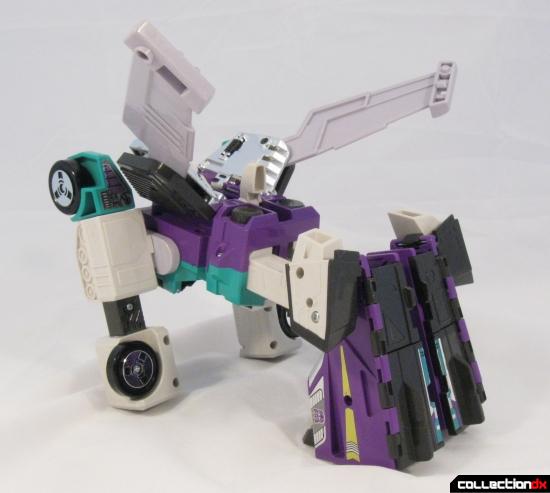 A shot from behind shows that Sixshot even has a small tail, which was re-purposed from the "radar dish" from armored carrier mode. 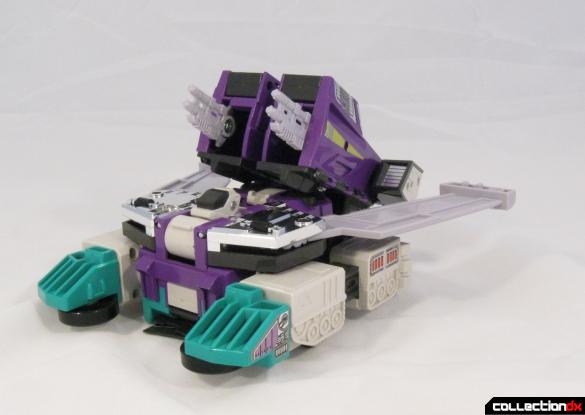 Sixshot's final mode is a tank. This is the only mode where you make use of his double jointed knees to fold his shins up and over his thighs. The wolf's jaw forms the cockpit of this mode while the dual leg guns point upward which makes the toy look like a futuristic anti-aircraft tank. I like the use of the green intakes on the front. Makes the tank look like it has a pair of nasty cowcatchers. 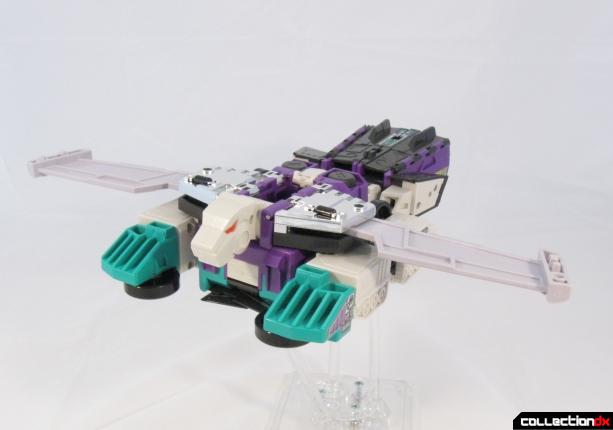 For the Headmasters television series, Sixshot used this extra seventh mode called "WINGWOLF" to subdue Ultra Magnus. This is one of the many examples of the Japanese series using additional transformations created by just playing around with the toy.

So is Sixshot deserving of all the love? I think so. While it is true that Sixshot ultimately does the same thing as Quickswitch in where the same limbs are used as different parts, Sixshot has just enough transformation involved with each limb and just enough extra detail that each mode feels complete and well thought out. It is true that most of his modes are cloaked heavily in that "futuristic design" mentality, but here I think it works. I am no ninja consultant, but I think Sixshot is worth a look. He was re-issued once before and he may make another appearance in the Encore line. Be vigilante, the ninja moves quickly and silently.

like an old friend coming to visit...a review on a transformer not a movie with van-diesel or a lunch box that goes back to getting ready for the first day of school after a great summer is welcome...bravo. Weird transformer but still cool

Great review with some much clearer pics of the silly modes than I've seen before. I didn't realize the tank mode was so cool, and kudos for including Wingwolf! I love the design of Sixshot, but the articulation has always kept me from wanting to spend very much on him, as compared to the other figures from his time. The fact that he can't even actually raise his arms up without having the chest wings get in the way annoys me the same way that Overlord's arms bump into his chest panels when you insert the PowerMasters. He has an awesome robot mode, combining cool wings with the car-calves, a favorite of mine.

Cool. This one came out after I had come to realize that me and Transformers didn't mix (mine always broke so I focused on GI Joe), but I remember being jealous of my friend who had it.

I mentioned it in the video, I guess I just forgot it here. There's also the Transformers Victory character Great Shot.

Yeah, the flashy colorful Autobot version... sadly, I'll probably splurge for him before Sixshot, Almost got him once already... I love his Bravey chest with gold chrome.

just what the doctor ordered, I recently picked up TRU Perceptor and Insecticons and am on a serious Transformers kick right now. God i love that feel of cold metal, the glint of chrome and the sharp edges of a foil sticker!

I've had my eye on a Sixshot ever since the IDW comic spotlight, and now my desire has only increased! Just wish it had a US reissue. Kinda pricey right now.

Dang dude, I wish you'd posted this review sooner. If I knew how cool this thing was and how to do all the different transformations I wouldn't have given mine away to this random prick I know on tbdx :-p

What do you all consider the *actual* ultimate transformers challenge? Sixshot is technically complex, but not terribly difficult or challenging to transform.

I'm not really sure which transformer holds the title of the most challenging because I hadn't experienced one to transform yet. Right now, I would have to say it's either MP-05 Megatron or BT-10 Grimlock, so the advanced skill rate between them is neck & neck on my side.

And I must say that as soon as I'm done with Grimlock, I'm gonna re-tool the hell out of Megatron to give it a more toy accurate appeal like his 80s toy version. Anime magic doesn't always suit well in linear physics in the world we live in because magic tricks are just illusions.

Wow, that's pretty neat! I'm not usually impressed by the original stuff, since the action feature back then was just the fact that they transformed (leaving the rest a sorta-moveable chunk). This one has a lot of play value, though! I love the jet and tank modes. I think part of the draw, for me, is that it doesn't turn into anything realistic. I always found the normal cars and jets kinda boring.

I have the Shadowmaru remold/repaint of this. Awesome toy but i'm confused why official toy pics have his car mode's wheels so far back...

Guess who's getting an Encore release!?