This is a 748 piece set, twice as many as the Republic Striker-class fighter I looked at a couple of months ago. 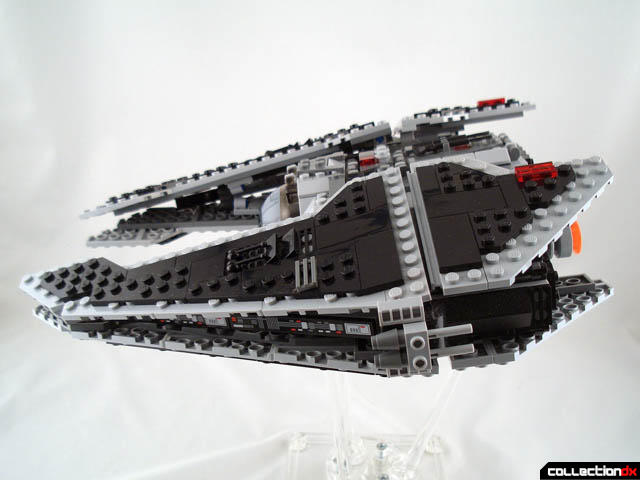 The Fury-class Interceptor is the second Lego release based on a vehicle from the video game Star Wars The Old Republic is actually a ship players of the Sith faction fly in the game. It’s basically standard-issue gear for a Sith Lord in training. 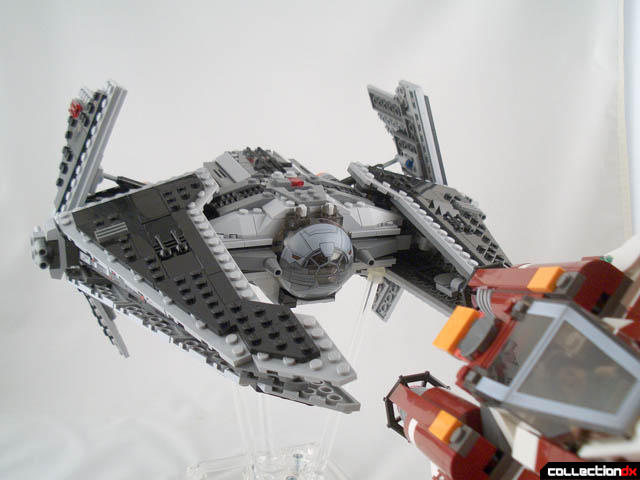 The build was certainly more challenging than I had anticipated, but with double the parts I should not have been surprised. In total this one took me about four and a half hours and I compressed the whole thing down to about three and a half minute in the video at the top of the review.

A great deal of it’s challenge was actually in the wings. Most of my assembly time was spent building these. 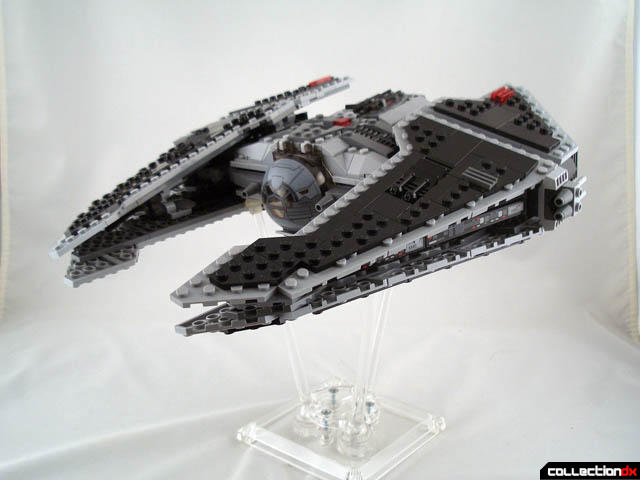 As a finished representation of the in-game model this one turned out to be a bit of a disappointment. In the game this ship is a similar size to the Millennium Falcon. Here Lego has shrunken down the ship to be more of a larger fighter. 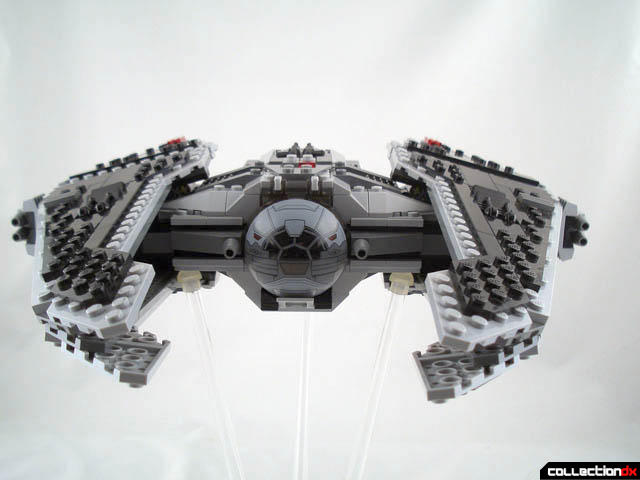 The missiles do sort of fire if you flick them out. 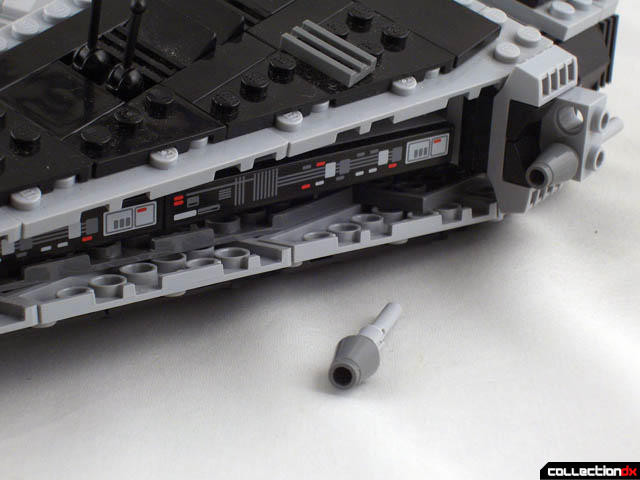 The antennas in the top do flip out. 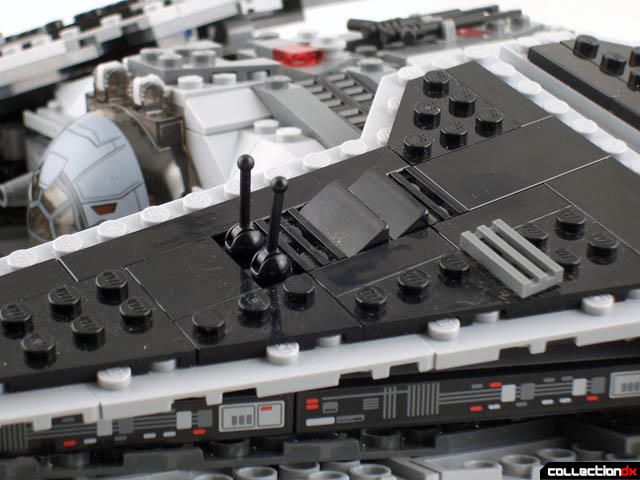 The foils do open and you can see the similarity to the Infiltrator in The Phantom Menace as well as foreshadowing the evolution into the T.I.E. fighter. 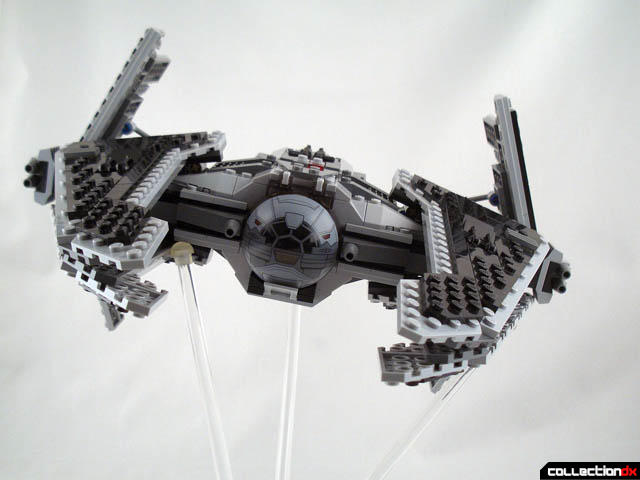 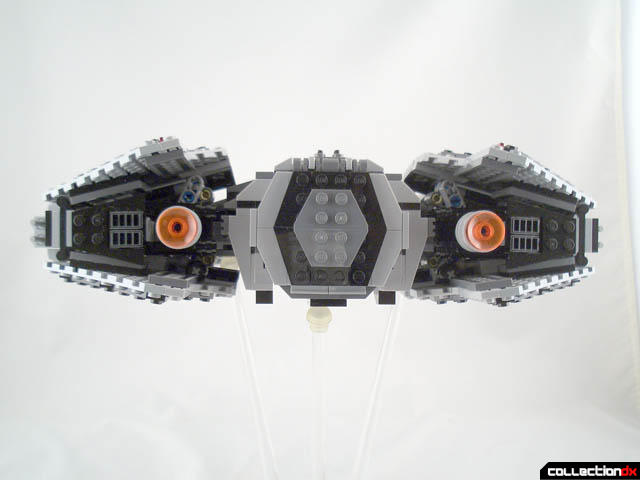 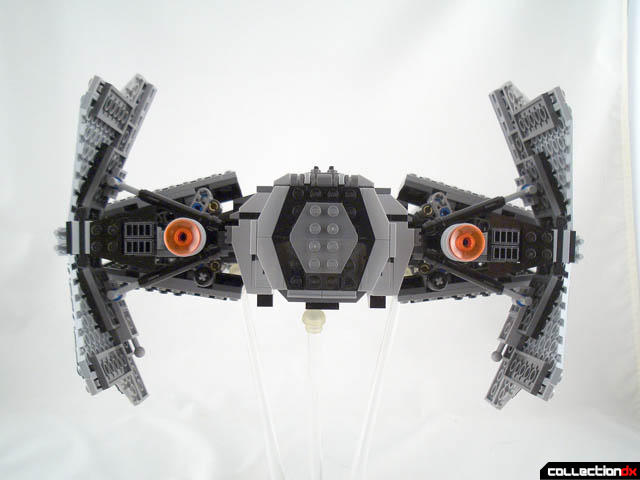 The pistons do a good job of holding the foils open. 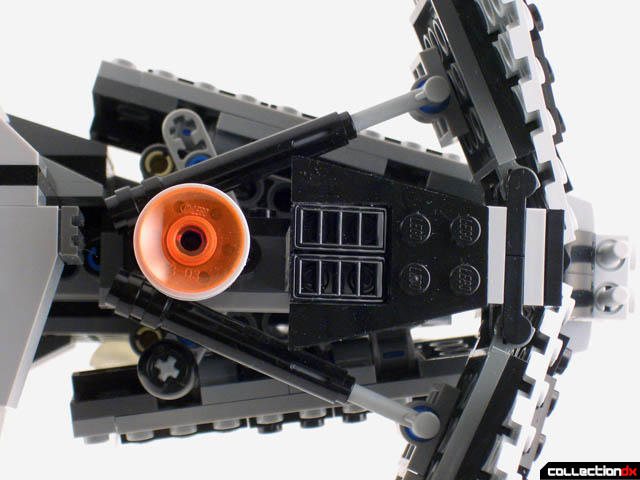 This round nub holds the lower foils flush to the body when they are closed. 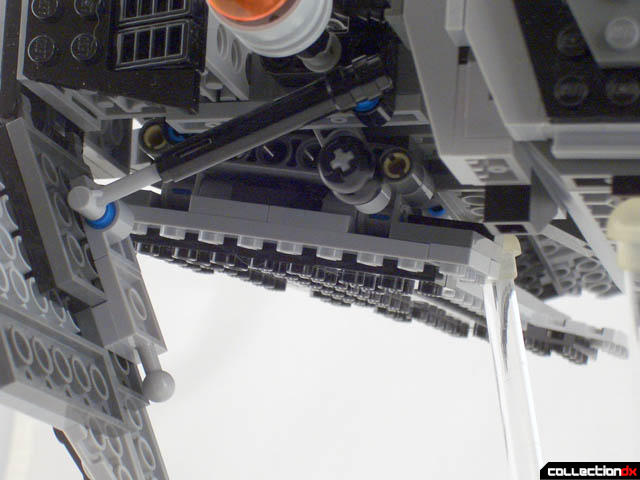 It’s here with the cockpit the variation from the in-game model becomes really apparent. In the game this holds three people with room to stand. Here it fits just the single figure.

The cockpit cover itself doesn't actually “lock” into place, instead opting to use gravity to hold it in place. I flip the “ramp” up to lock it in. 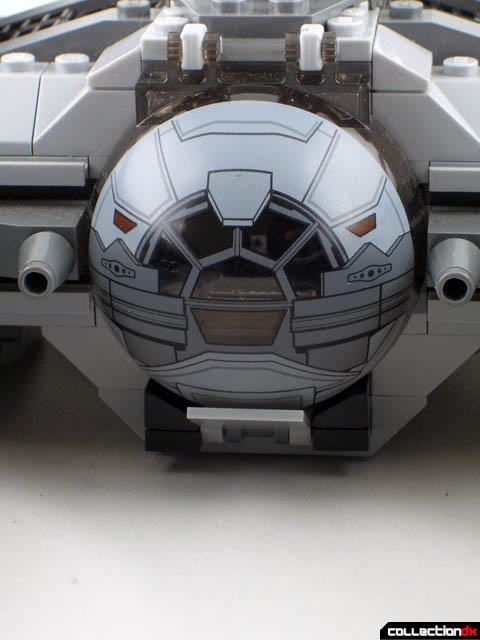 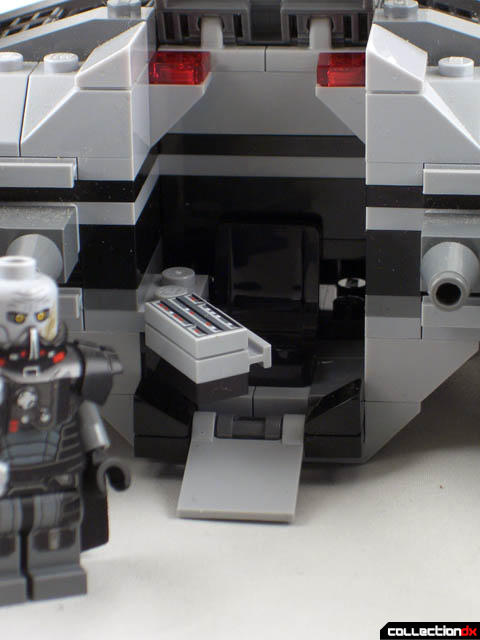 The ingame model features a loading ramp akin to the Millennium Falcon on the back of the ship to enter and leave. On this Lego recreation it is instead a little cart that slides out and is large enough to accommodate the two trooper figs. Little clips on the side can hold their rifles. 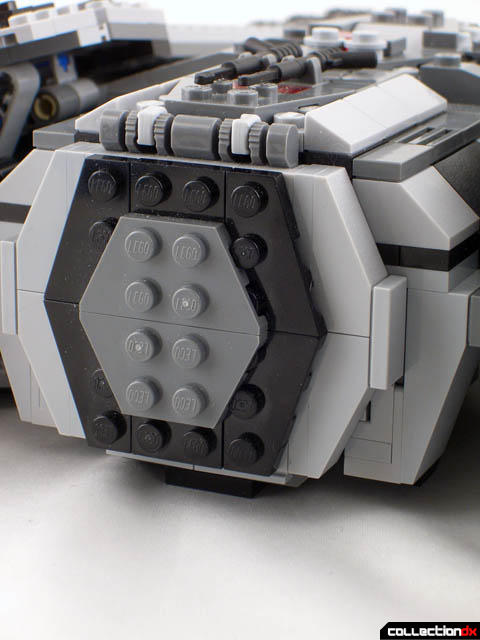 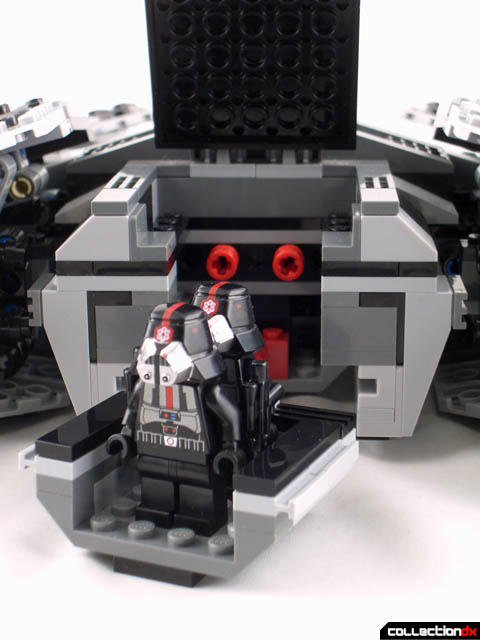 The minifigs included with this set are the real stars here. Apparently some of these Star Wars The Old Republic minifigs are selling for some pretty crazy prices on the aftermarket. 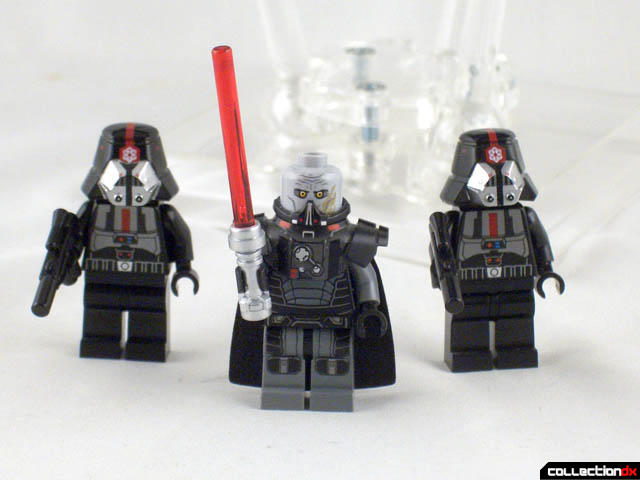 The Darth Malgus figure not only features a fabric cape but his chest plate and mouthpiece are sculpted and painted in very nice detail. 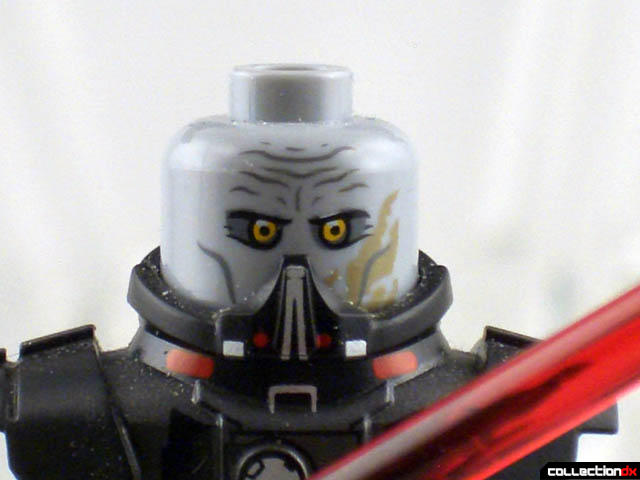 There is something adorable about taking a truly vile and evil villain like Darth Malgus and making him a cute Lego minifig. 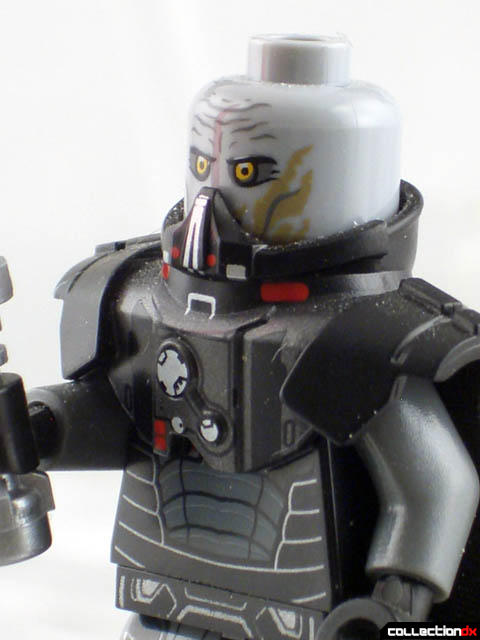 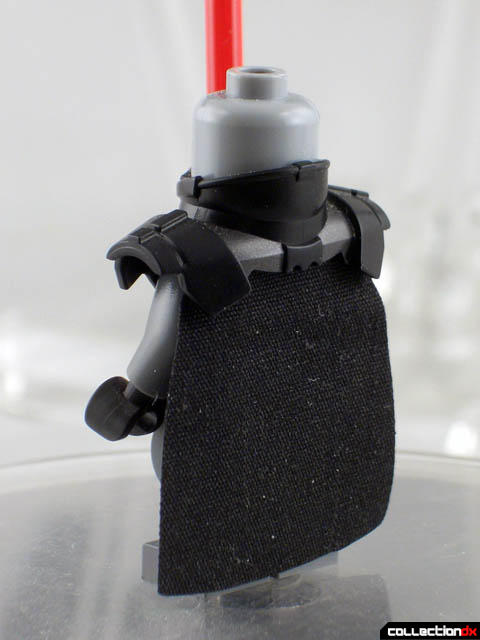 The Sith troopers actually include their helmets (unlike in the Republic set) and they are removable. 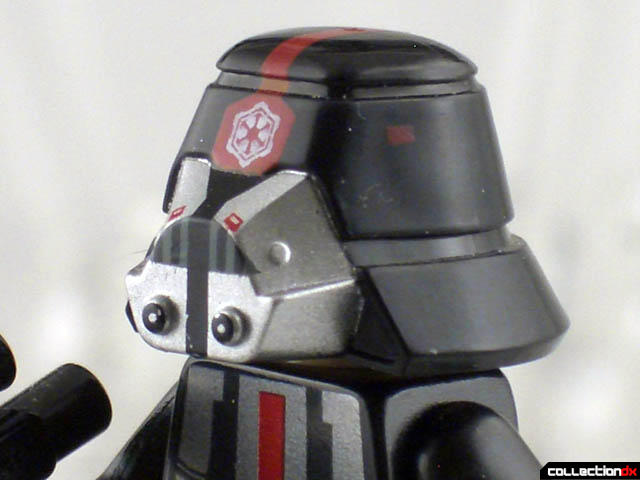 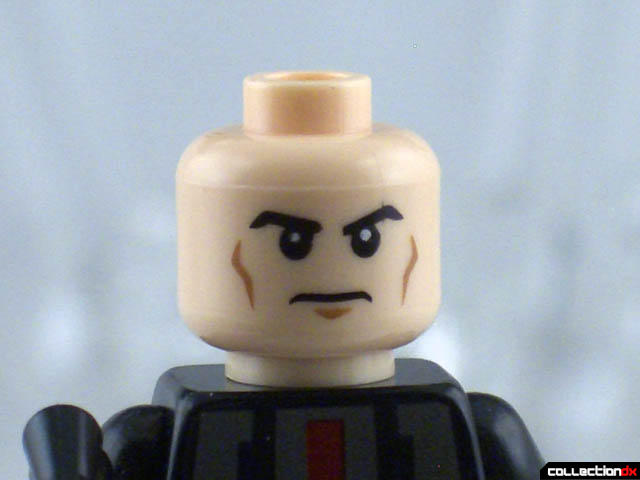 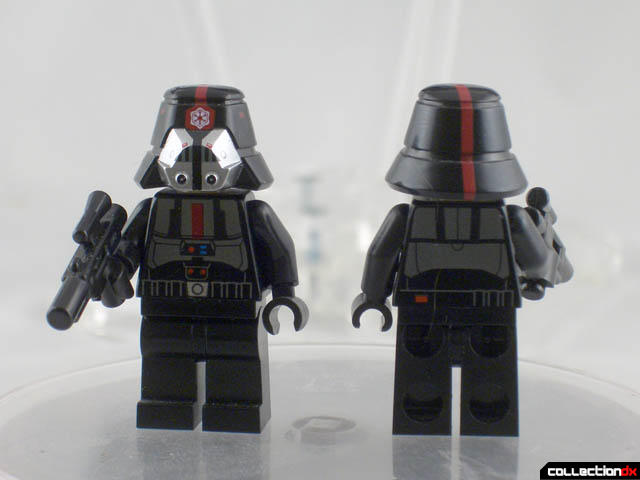 While this wasn't as fun as the last kit it does look nice. As a Star Wars The Old Republic fan I am happy to add this iconic vehicle to the shelf, but I am thoroughly disappointed it is not a very accurate representation of what players pilot in the game. 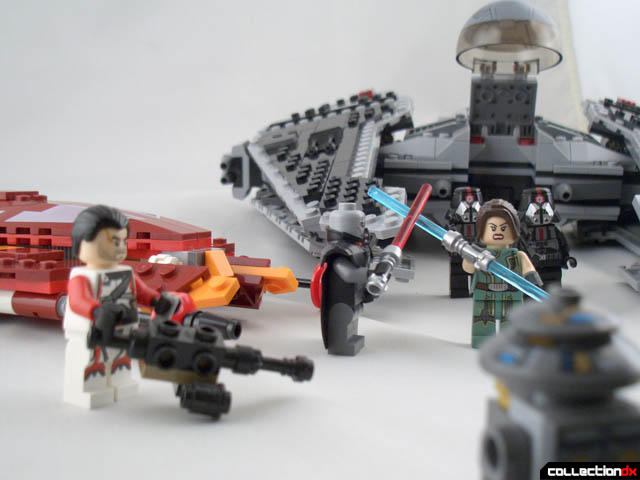 2 comments posted
Adam, I think your lack of

Adam, I think your lack of exposure to SW Lego sets set you up for disappointment here... While I do not have one, now that you reviewed it I find it a quite impressive set for its size!
For the most part, Lego does not build SW sets to-scale with minifigs, and usually the proportions of the vehicles aren't that close [unless it's something hugely iconic like the Falcon or an X-wing]. Rather, they design the sets to accommodate minifigs, not the other way around. After all, the bigger a set is, the pricier it gets! I would have been stunned to see two minifigs in the cockpit here, though the pull-out tray in back does leave me rather cold.

Beyond that, I'm highly impressed with the new piston joints, detail on the minifigs, and sheer size of this set!

BTW, when they say "Flick Fire!", it's not really meant to be taken literally- "Use your fingernail to push them"- because they don't have the inertia or weight to carry out such a movement. Rather, they're more like bomblets than far-traveling rockets (regardless of what they actually are in the game).

Ooh, this makes me wanna shoot for that Mandalorian ship now...!

I think one of the only sets they did design to scale of Minifigs was the Ultimate Collector's Falcon. If memory serves it was about 500 USD when it came out.

I'm seriously on the fence about this kit. The design is one of my favorite in TOR, but it seems expensive for what it is.