Masked Rider 1 was brought to you by Bluefin Tamashii Nations!

Faced with the destruction of Leawood (and the world), Prince Dex seemed like he was completely out of options! Defeated by one of Count Dregon's minions, hope was nowhere to be found for him until the MASKED RIDER WARRIORS leapt into action! This special team of Warriors from other planets or something or other journeyed to Leawood to put a stop to the evil Dregon once and for all! Lead by the determined Warrior Leader and Other Warrior Leader, Warrior Commander, V3, Rider Man, Masked Rider X, Amazon, Strong Man, Zee Cross, and some other guy assist Dex in foiling his uncle's plans and show him what it truly means to be a Masked RiDER. 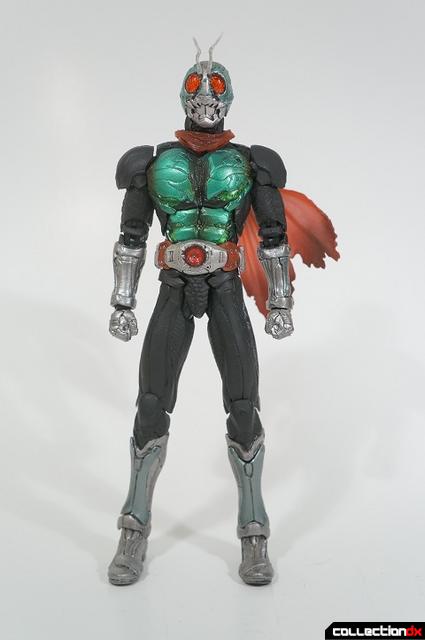 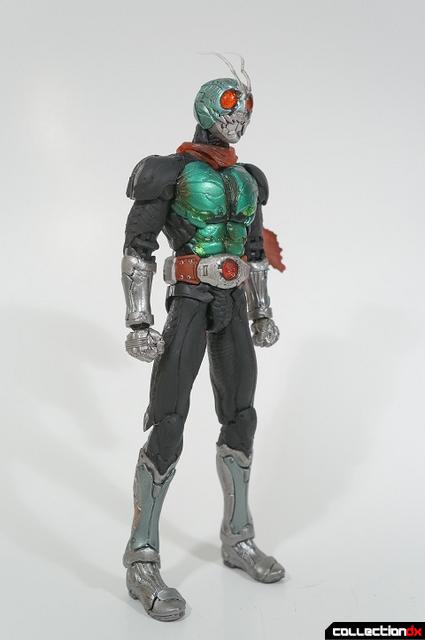 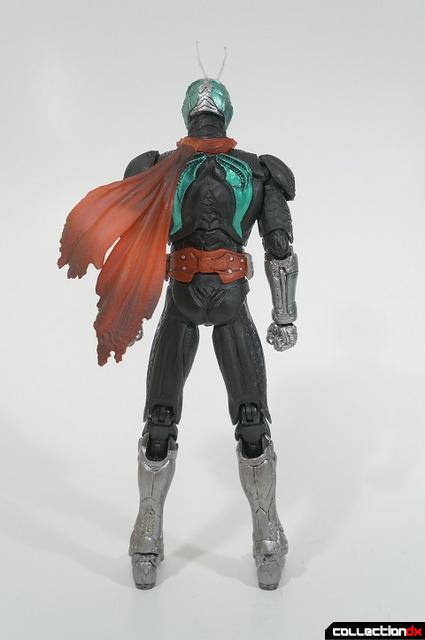 Warrior Leader is sculpted here in true S.I.C. fashion. S.I.C stands for Super Imaginative Chogokin, and prides itself in showcasing well-known characters in a way that is reminiscent of a horror film. And boy, does it look good. 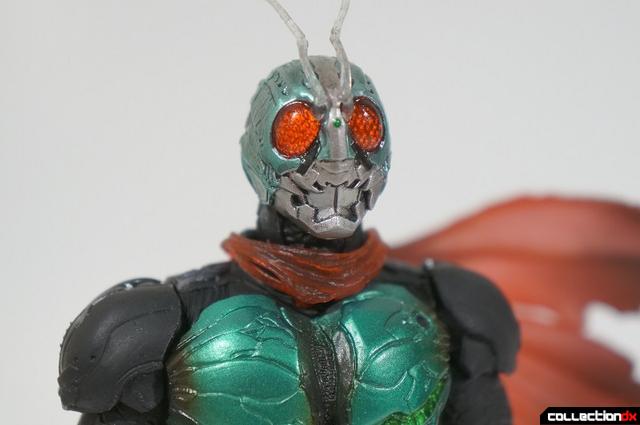 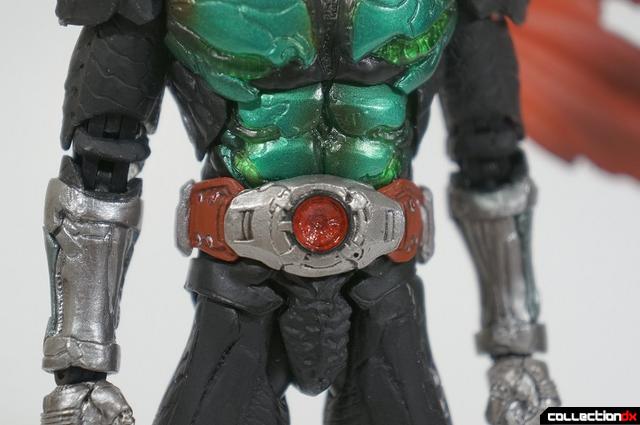 The dark, heavy lines really pop out and set him apart from other bland figures. I especially love the asymmetric sculpt here. Some folks might not like his lanky proportions, but I love it! I just can't stop staring at this guy on my shelf! I also love how the sculpt hides a lot of the articulation in a way that looks natural. It's just breathtaking. 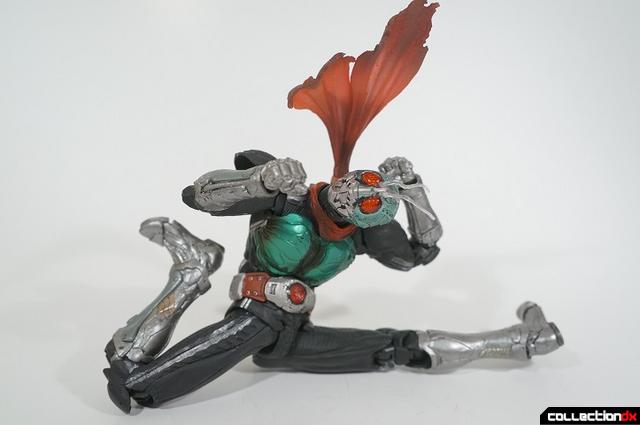 The articulation is also really well done here. There are hinges on every single part of his body. If it looks like it should be able to move, then chances are it does. 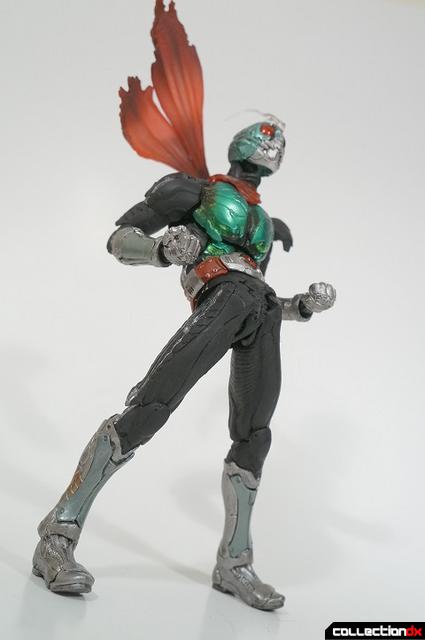 I especially love the ab crunch because his chest can move up or down so that there is NEVER a gap in the sculpt! I haven't seen that before on very many figures. It just proves how spectacular this figure is. The scarf is also very well articulated. There are several swivels at the base of it so it can move in any direction and still look natural. I have ZERO complaints here! 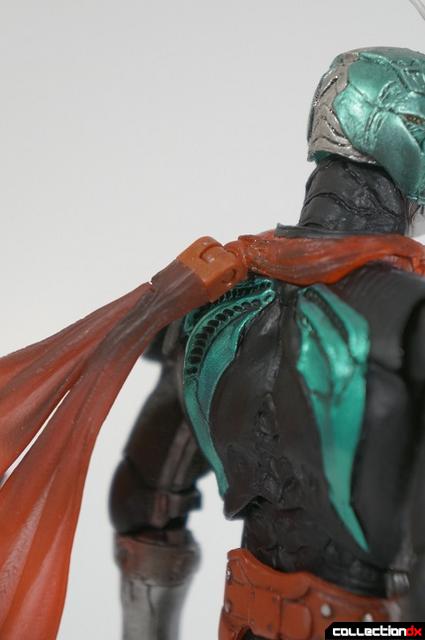 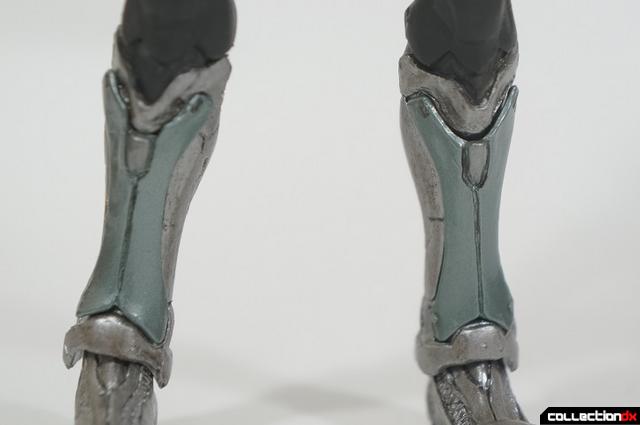 He also has some diecast in his shins. That way they can use the word "chogokin" without people screaming at them. 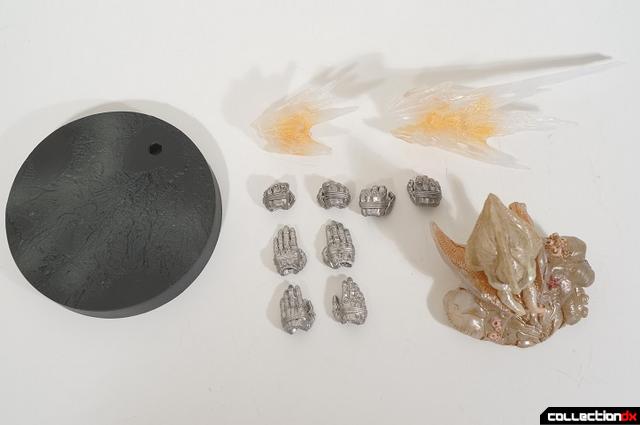 The accessories are also pretty nice, if a little limited. He comes with four pairs of hands (fists, posing hands, calm hands, and holding-things hands). He also comes with a base and upper torso of SQUID DEVIL! It is SUPER DETAILED and looks awesome! 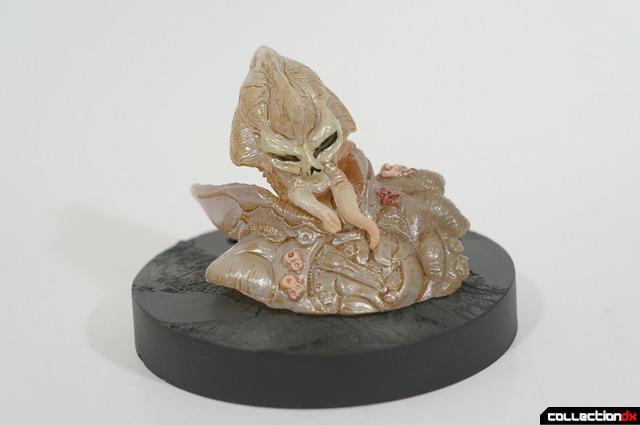 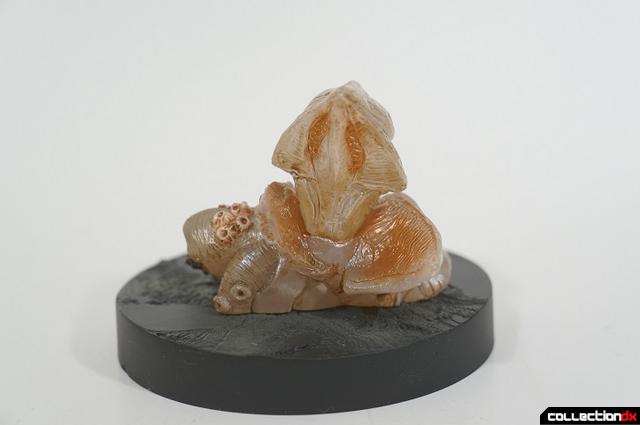 He also comes with effect parts for recreating a RIDER KICK and RIDER PUNCH! These come apart so it is easier to attach them. They look very effective. I like them a lot. The translucent plastic really helps here. 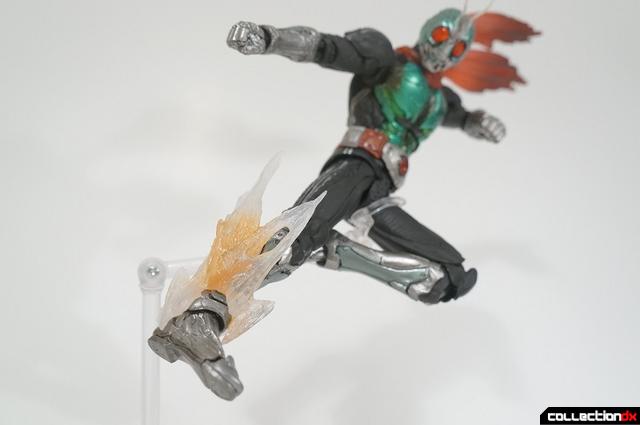 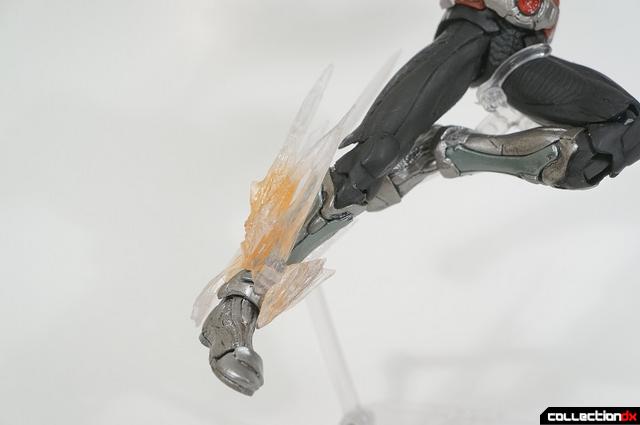 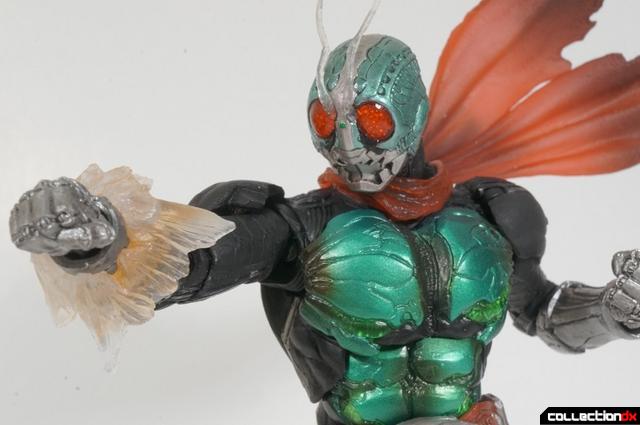 Warrior Leader also comes with a seperate head that is screaming and looks like it erupted straight from the pits of Hell. 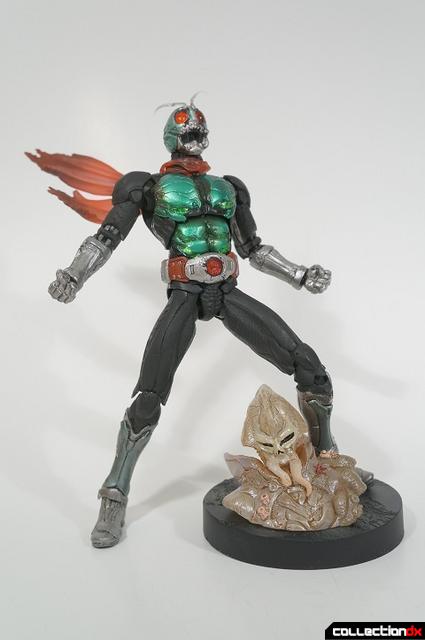 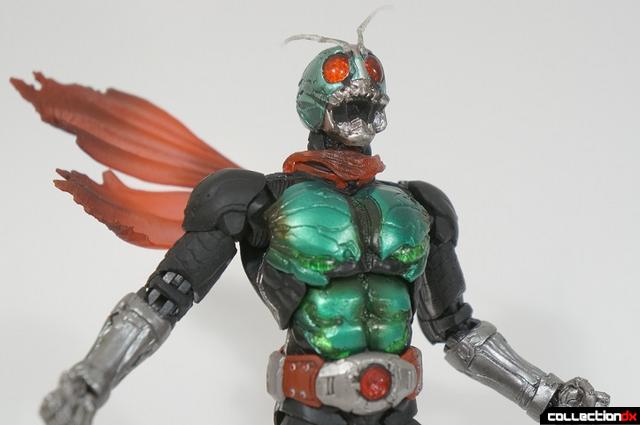 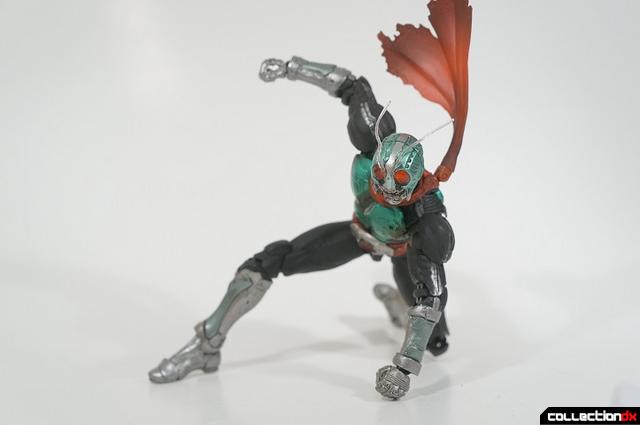 Sure, Masked Rider Warrior Leader never did anything like that in the show, but I really like the stylistic approach here. If you disagree with me, then you can deal with him. 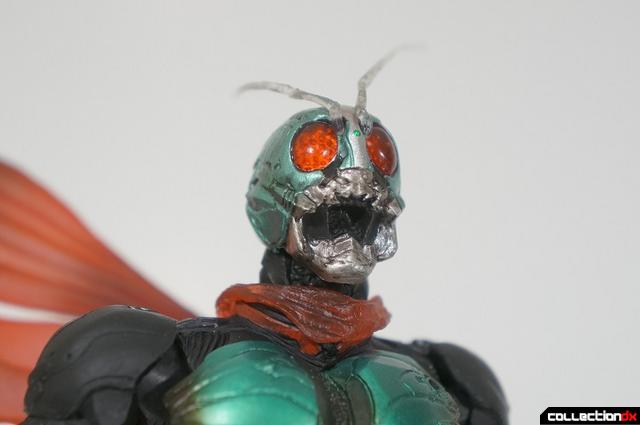 LOOK AT THIS FACE. 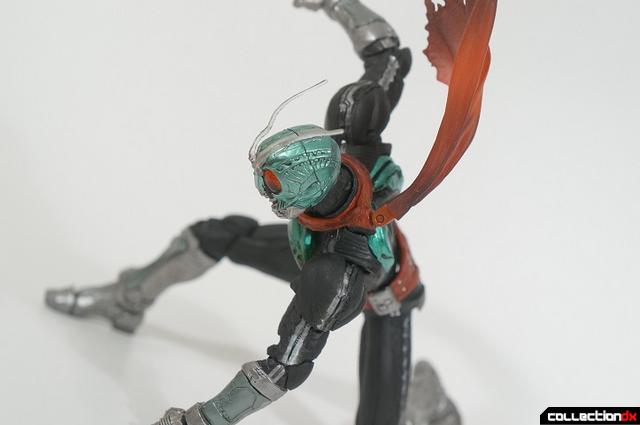 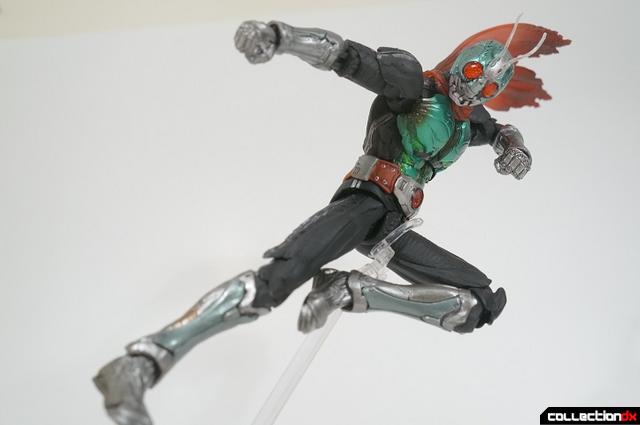 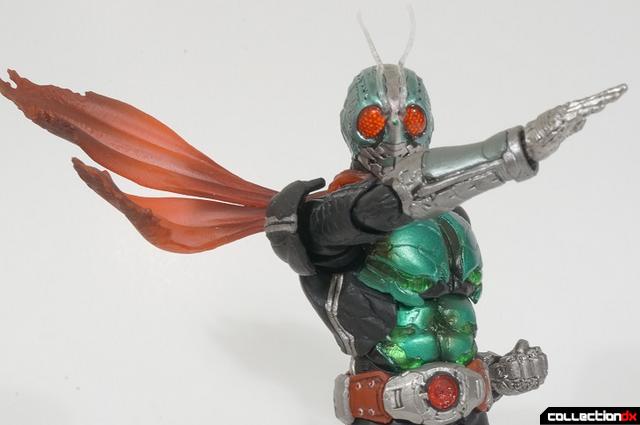 Of course, while the accessories seem a little limited, I found that this set really isn't lacking anything. Warrior Leader has everything he needs for the most part (*vroom vroom*). 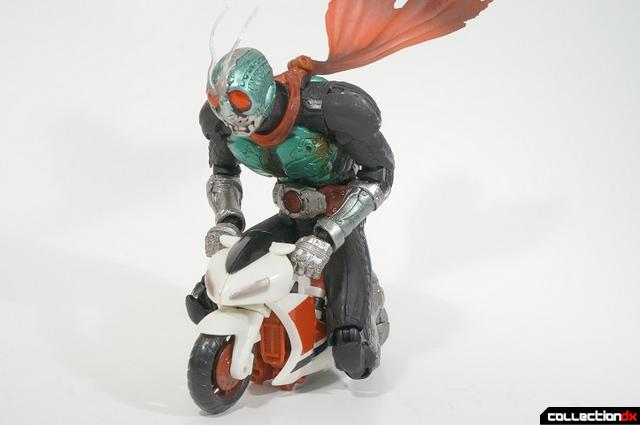 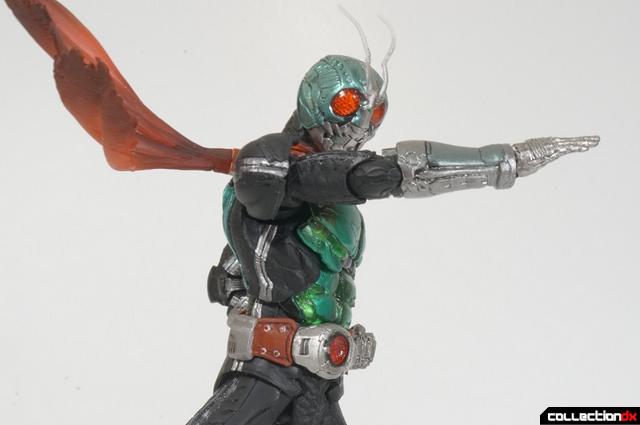 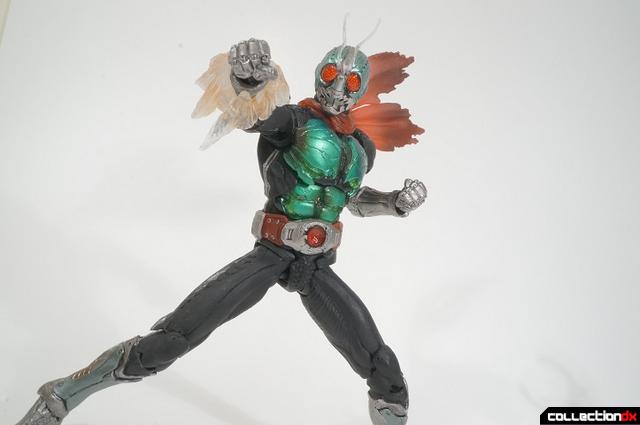 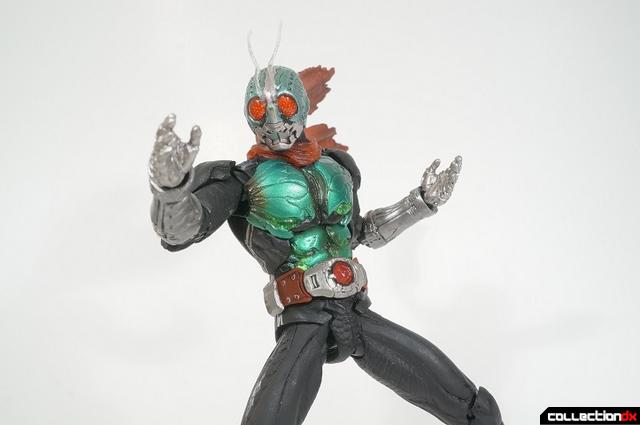 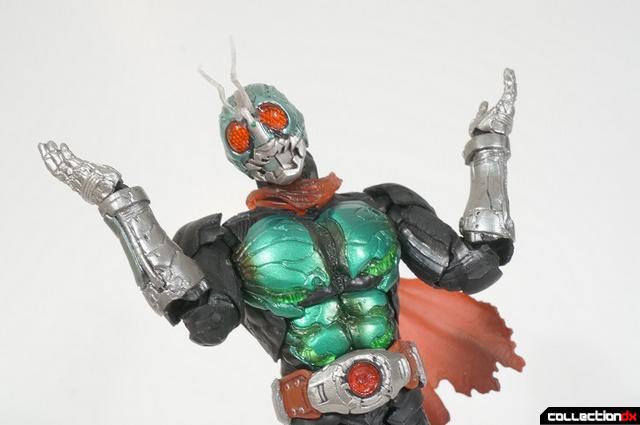 Overall, S.I.C Masked Rider Warrior Leader is a great addition to any toy shelf! Fans of Masked Rider should ABSOLUTELY get him. Seriously. The addition of holding-things hands makes me wonder where this line is heading. I reaaaaaally want an S.I.C. version of his bike (MOVIE REALIZATION DOESN'T COUNT). If they announce a bike for him in the coming months, I will be one happy customer. Please, Bandai? 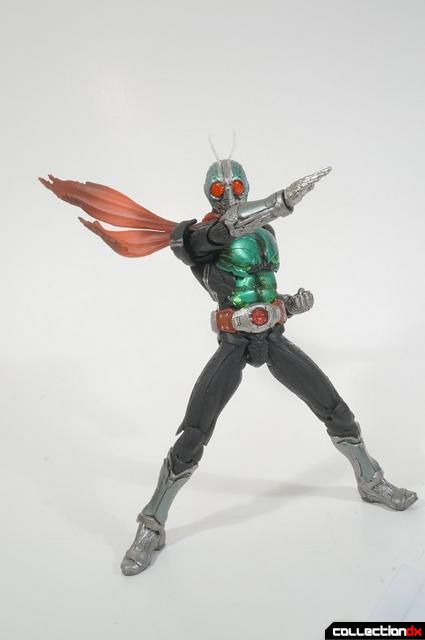 I lol so much at this pic.I was thinking of getting him but I don't want to start showa line of sic..Better stick with heisei for now plus ooo series been giving my wallet a lot of pain..

one question,is his pec movable?I have seen some pic that it can but the description is in Japanese and don't understand a thing.

Seems like there has been a lot of improvement in articulation. I bought ZX a few years ago and although it was articulated it really didn't work well. This makes me think revisiting SIC maybe worth it.

ZX redesign kinda backfired on itself. Try the Den-O SIC series. Sword Form in particular. Its a lot of fun messing with that set.

Thanks. The diecast weapons drew me in but I hated the articulation and I went back to figuarts. But I am such a Showa fan so I will go back and give this another shot.

For me, this is, so far, the ideal look for Kamen Rider 1. It manages to capture all that the hero would've looked like, if treated like any other kaijin that didn't have the chance to escape Shocker: heroic proportions, yet a monstruosity. Definitely one of my favorite SIC sculpts, along with Kamen Rider Black and Shadow Moon, for the very same reasons.

I'm still awaiting mine to arrive, but have high hopes for it.

Speaking of ideal Kamen Rider....if any of you are Kamen Rider fans and comic fans you should check out Kamen Rider on Comixology you can get volumes of Ishinomori for like $5 bucks or something. It is so worth it, it will make you wish it was the 70's.

*sigh* I really wanted to stick to the Figuarts guys with the classic, goofy guy-in-a-suit looks, but DAYMN this is fine! Friggin' love that screaming head! Everything about this figure looks fantastic.