Autobot Breacher makes his debut in the Hunt for the Decepticons toy line (i.e. not named after a character from a previous toy line or TV series). No information is available on him except for on the back of his packaging card:

“Teamed up with his friend SEA SPRAY, BREACHER comes crashing out of the surf to deliver a nasty shock to CRANKSTART. The DECEPTICON was foolish enough to think he could hide on a remote strand on the east African shore, but BREACHER is just as comfortable at sea as he is on land.”

Breacher’s included Coordinate Code number will unlock one game on the Hunt for the Decepticons website.

Breacher’s vehicle mode is a generic amphibious-use military Armored Personnel Carrier. (The toy, however, should not be placed in water!) 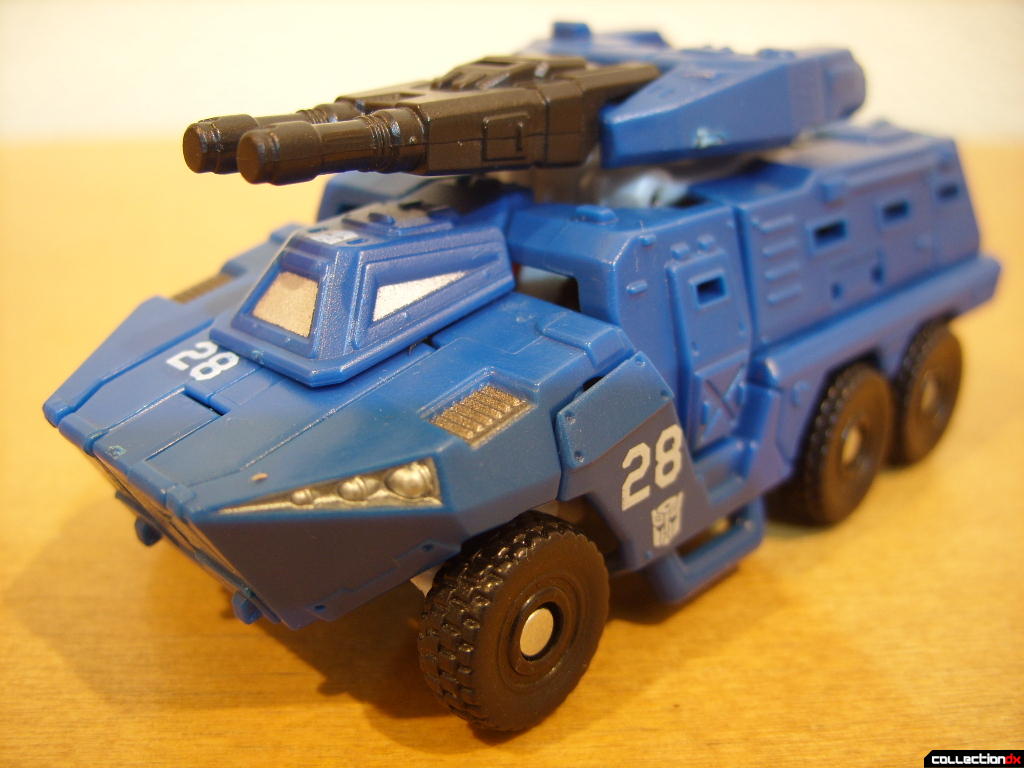 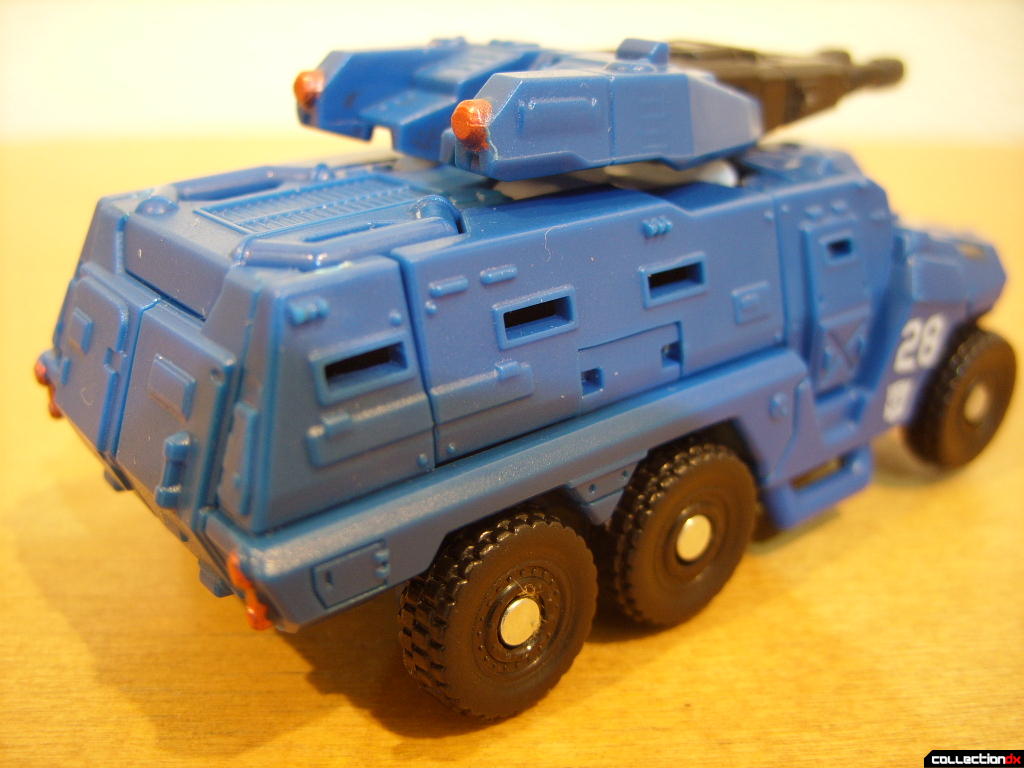 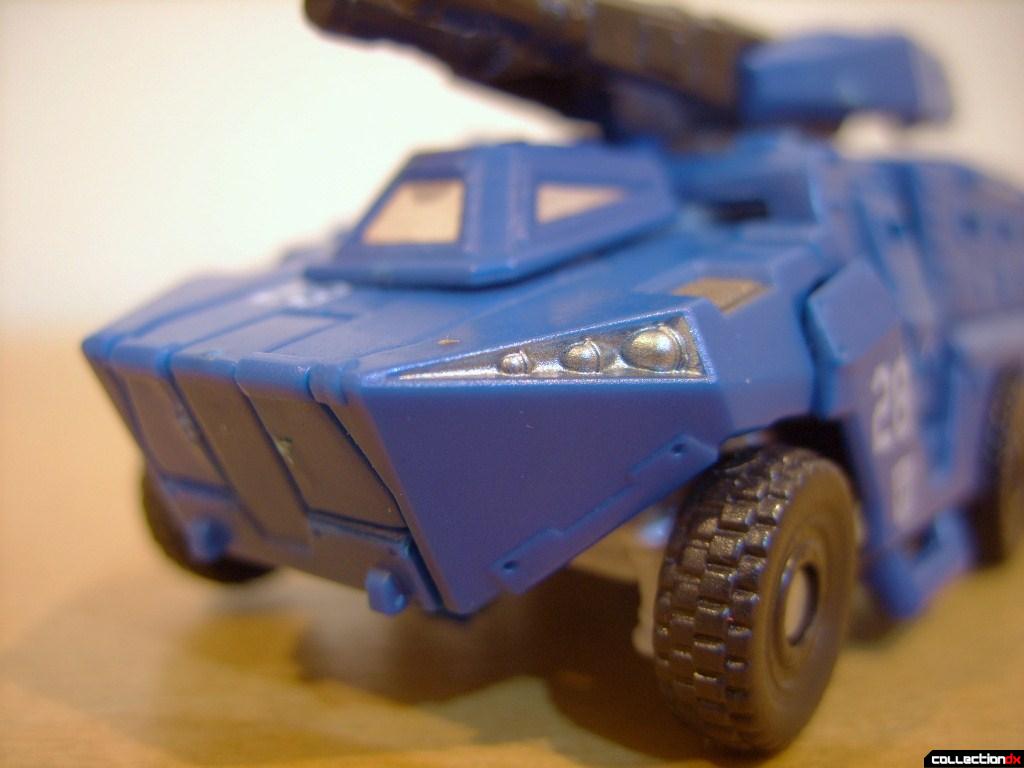 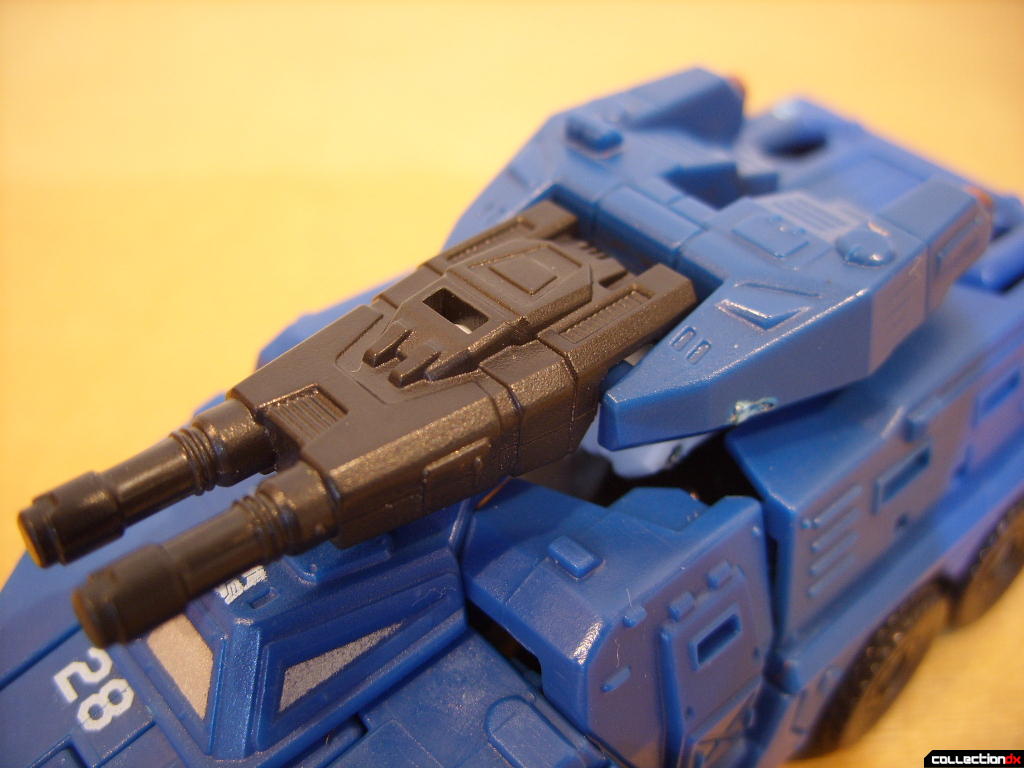 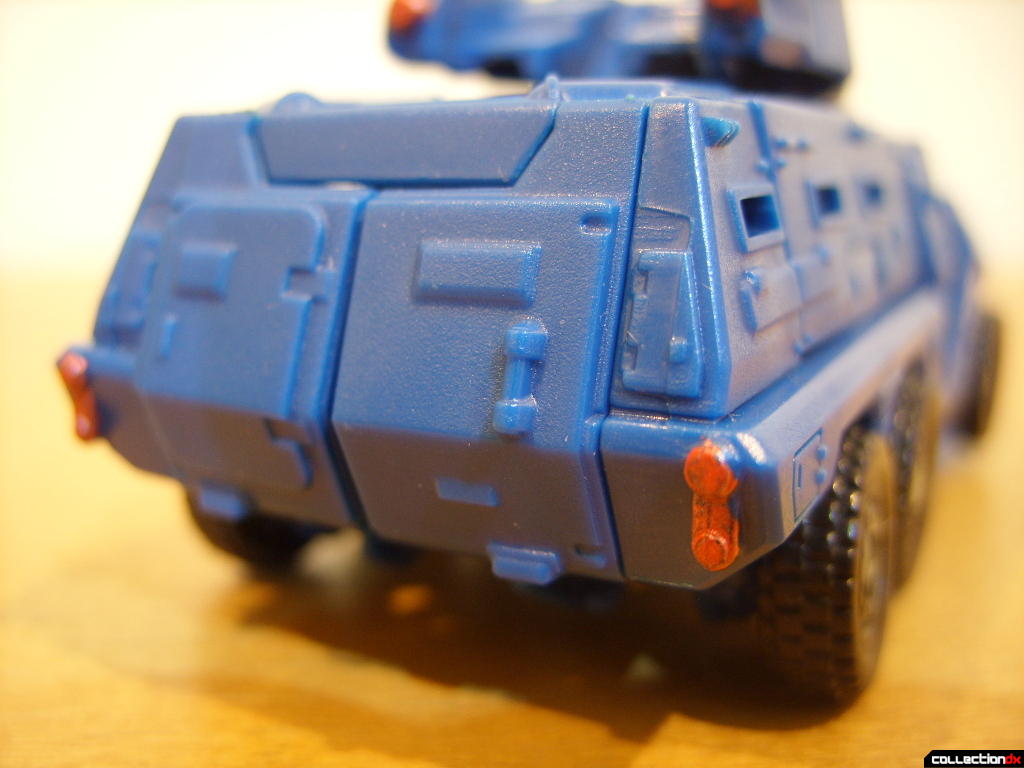 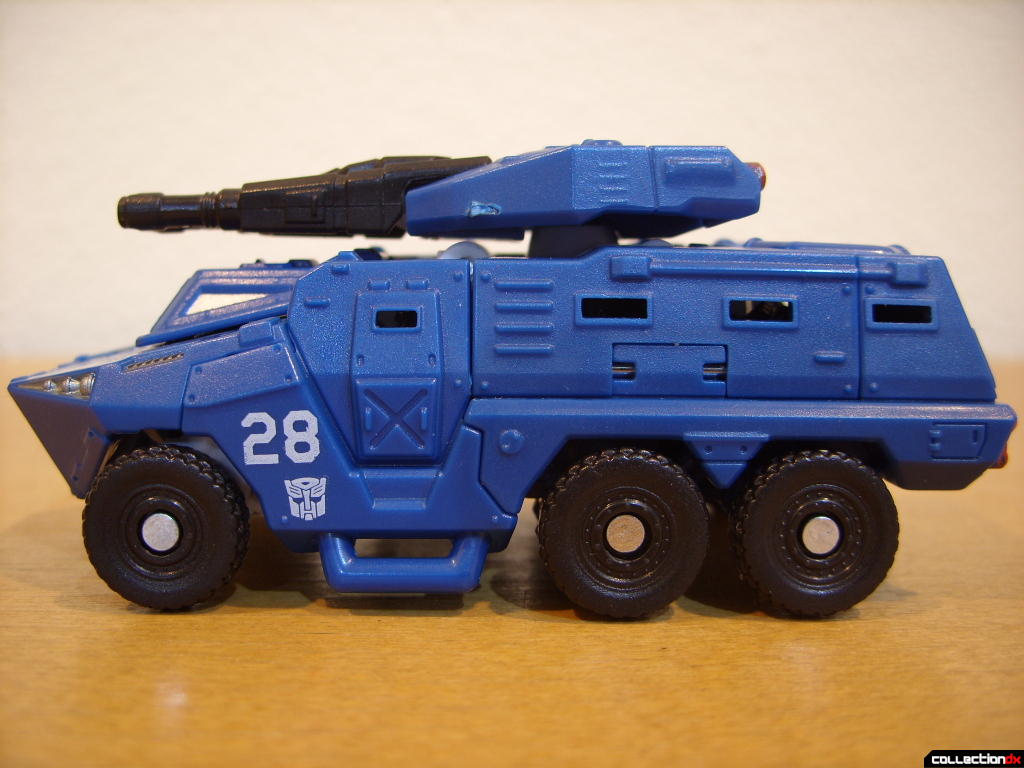 The six ABS wheels turn, while the turret and cannon barrels both freely turn separately. 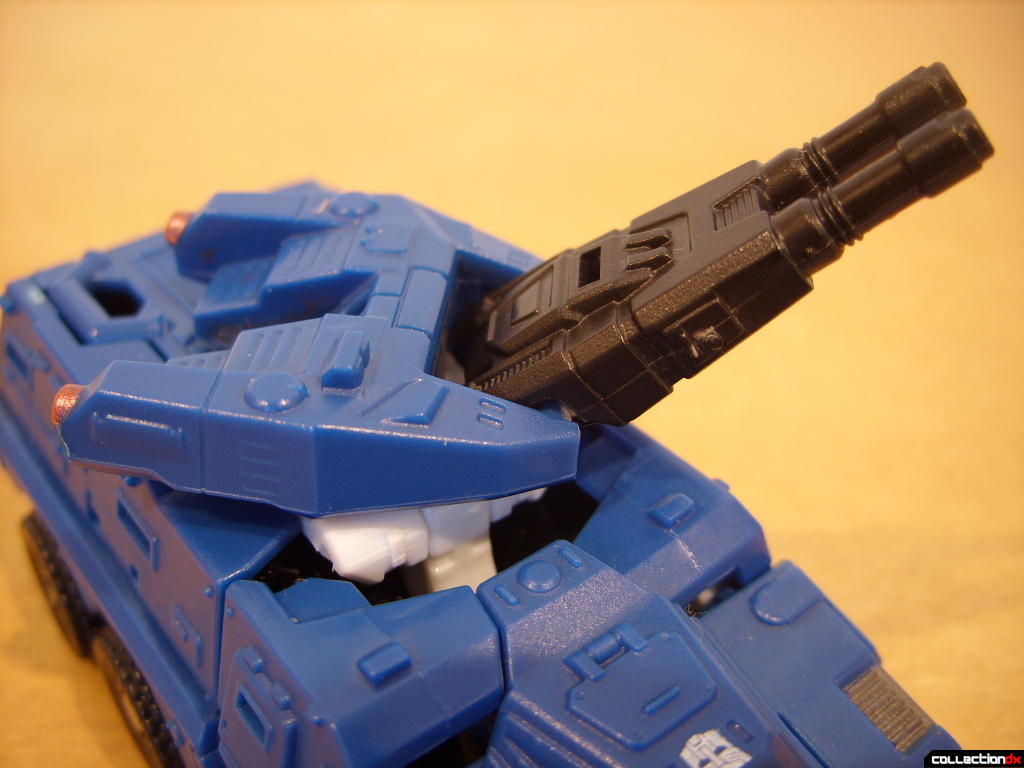 Despite being on a ball joint, Breacher’s head is very resistant to turning, but will pop off easily! (Maybe it’s just mine?) Also, even though the waist is capable of turning side-to-side, because of the transformation it does not turn in a natural way, which makes it off-center and thus impractical. 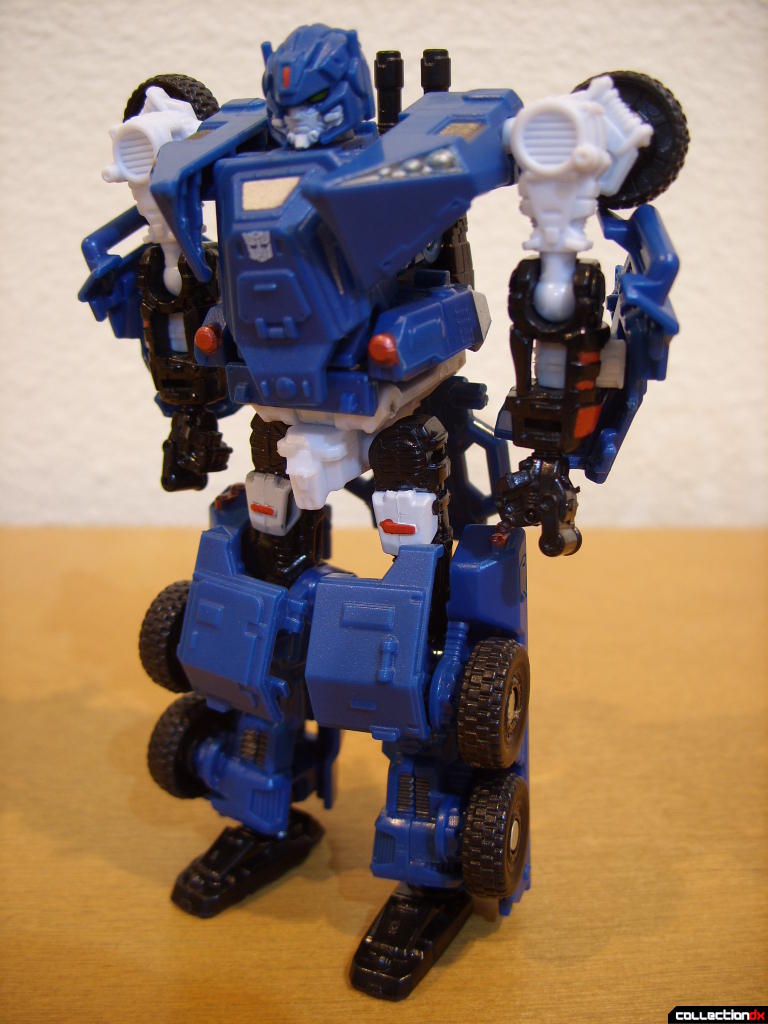 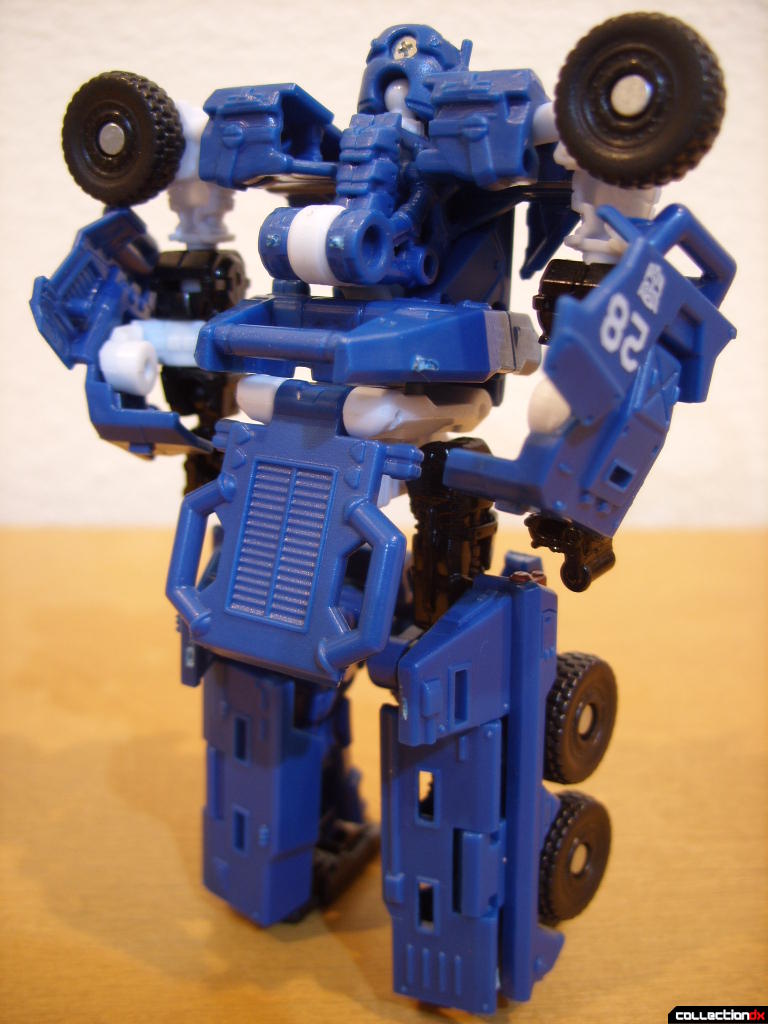 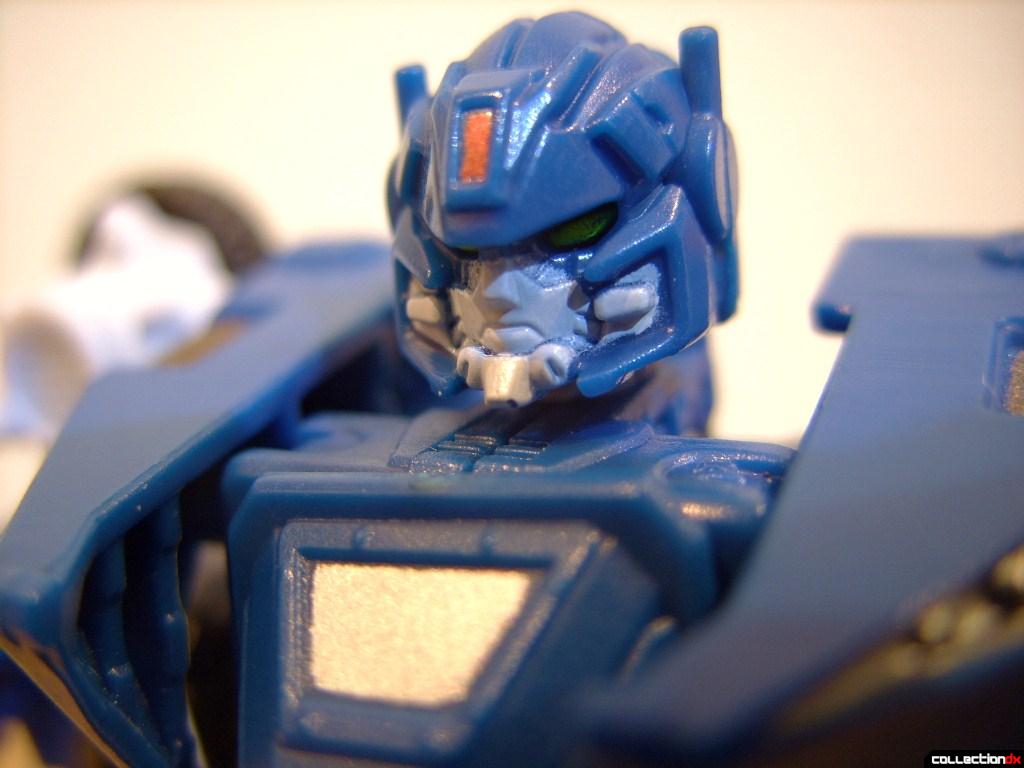 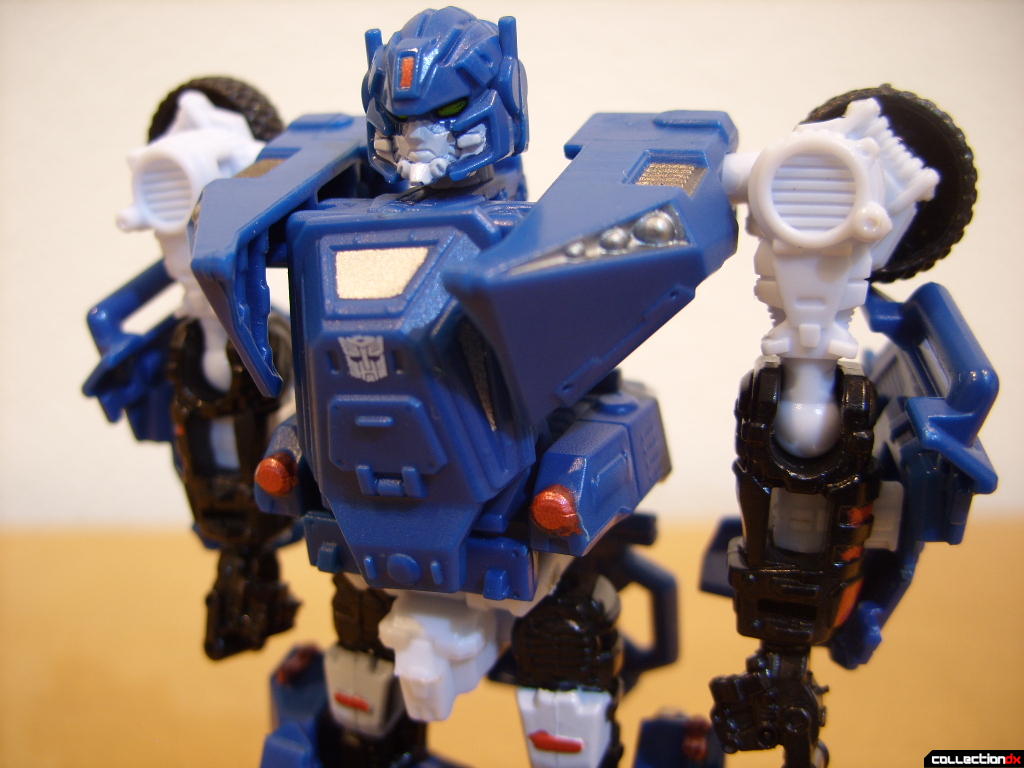 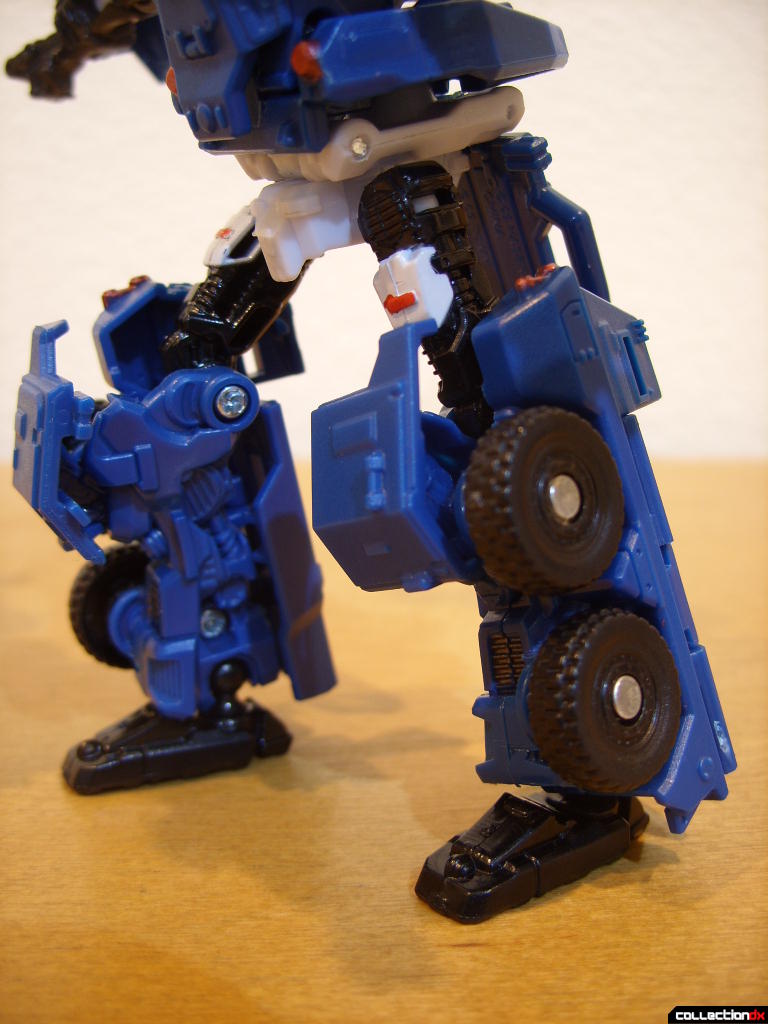 The double-barrel rifle is not gripped in the hands by a handle, but rather is clipped onto a small bar on top of the knuckles. Additionally, it can be stored on his back in a similar manner. 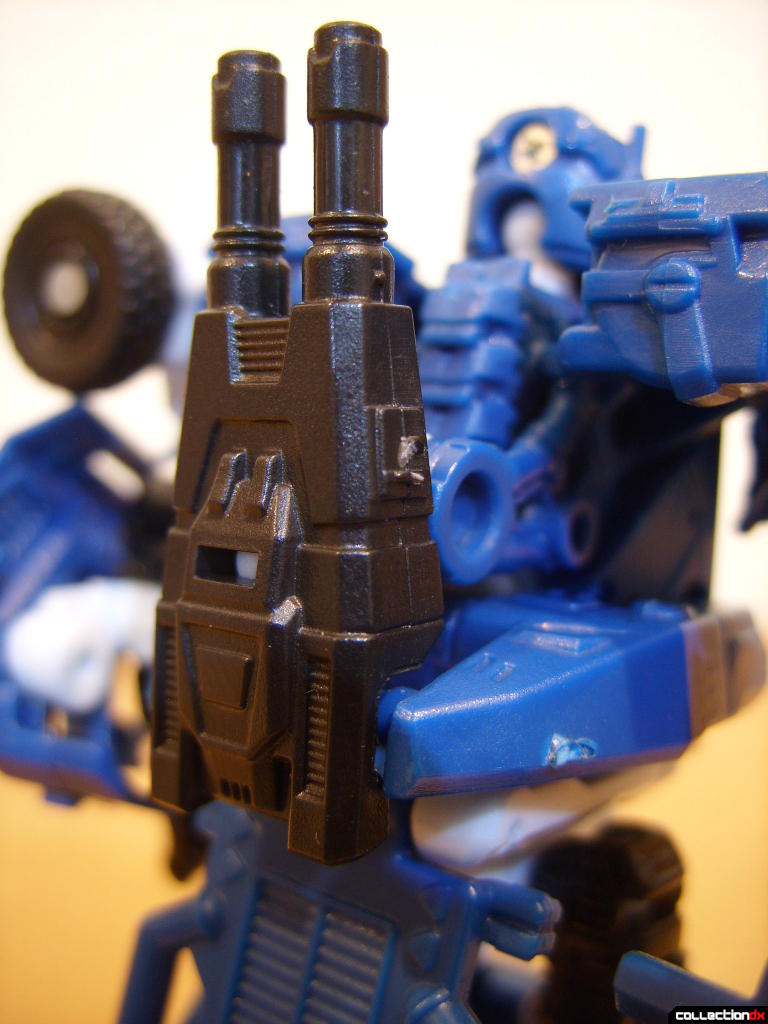 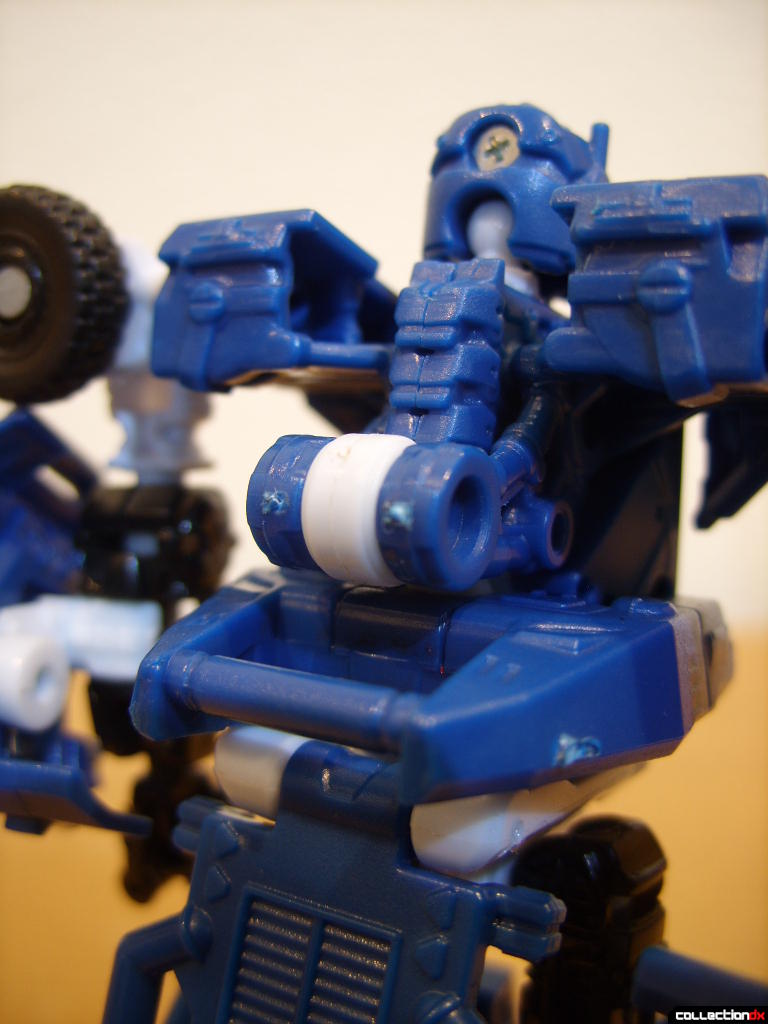 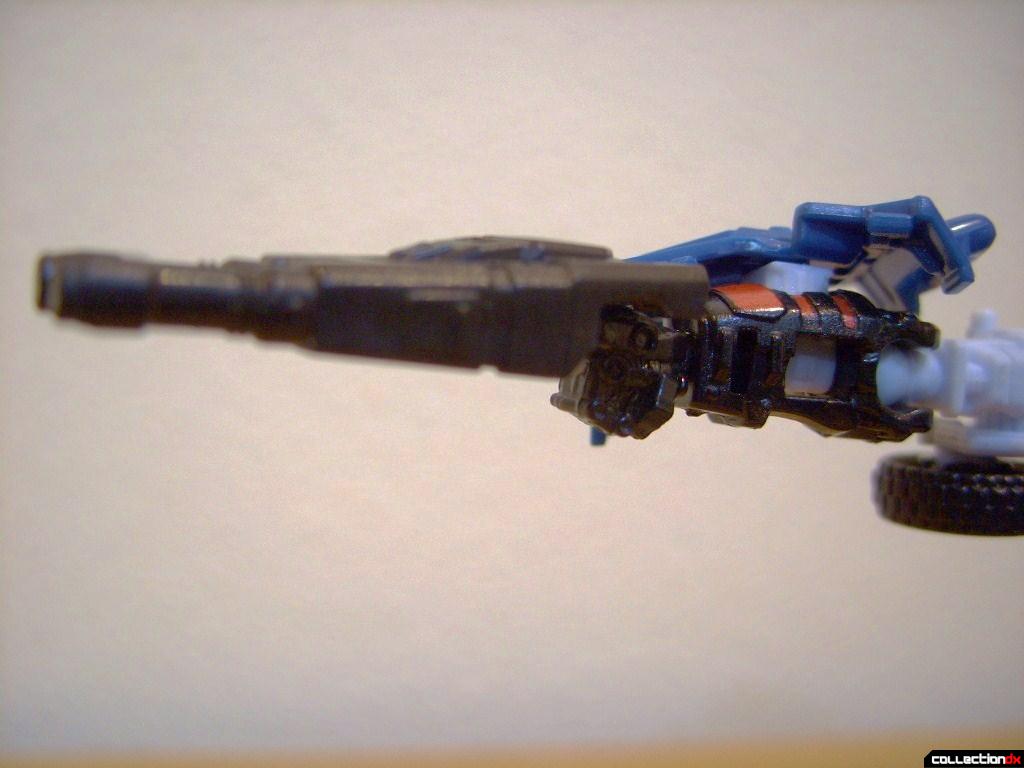 This whole Coordinate Code-thing is a call back to what they did in 2006 with “Transformers: Cybertron” and their Planet Keys gimmick, which also had you inputting unique codes into a website to gain access to character-specific information (back-stories, concept art, color design, etc.), but with HftD, you only have four cheap Flash games!? How boring… I’d like to see more of that character-specific behind-the-scenes stuff again in the future, which I found engaging as a collector the first time around. 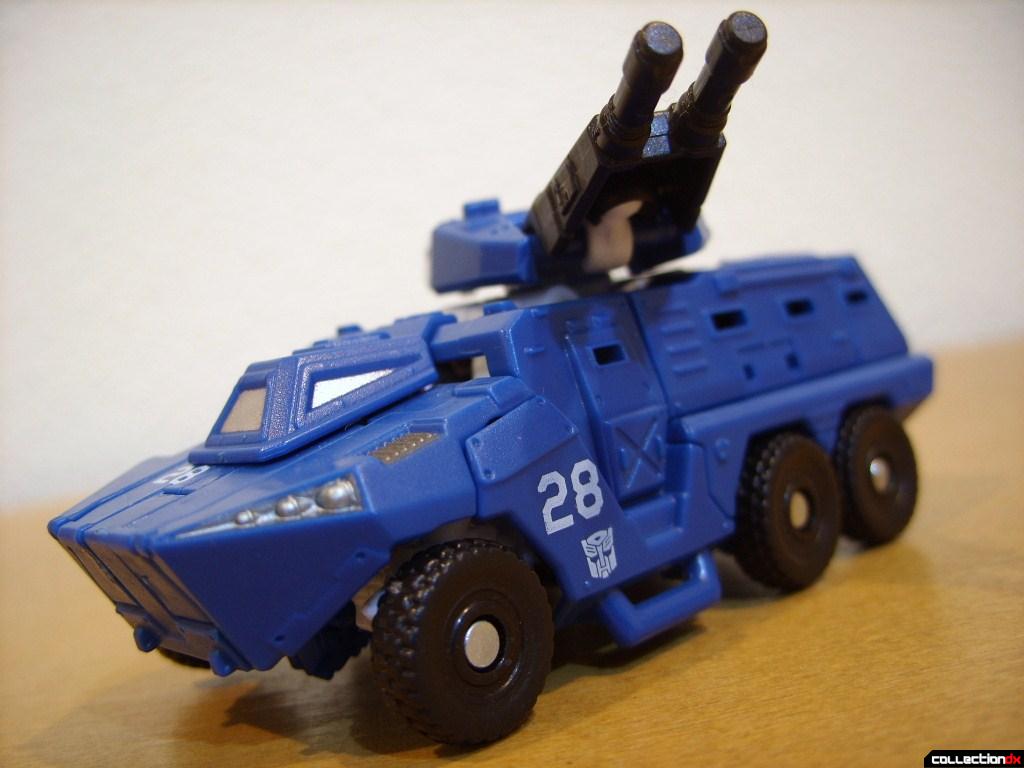 Because this toy comes from the Bayformers universe, like it or not, it’s gonna be chalked full of gutsy surface & mold detail. This applies in both vehicle and robot modes. ‘Nuff said. Having a turret that turns is always nice, but having barrels that pitch up-and-down as well? That’s always a treat! It is a bit of a hassle realigning those arm panels just as the vehicle mode is nearly complete, because they don’t twist the way you want them to, and the fists get in the way too. 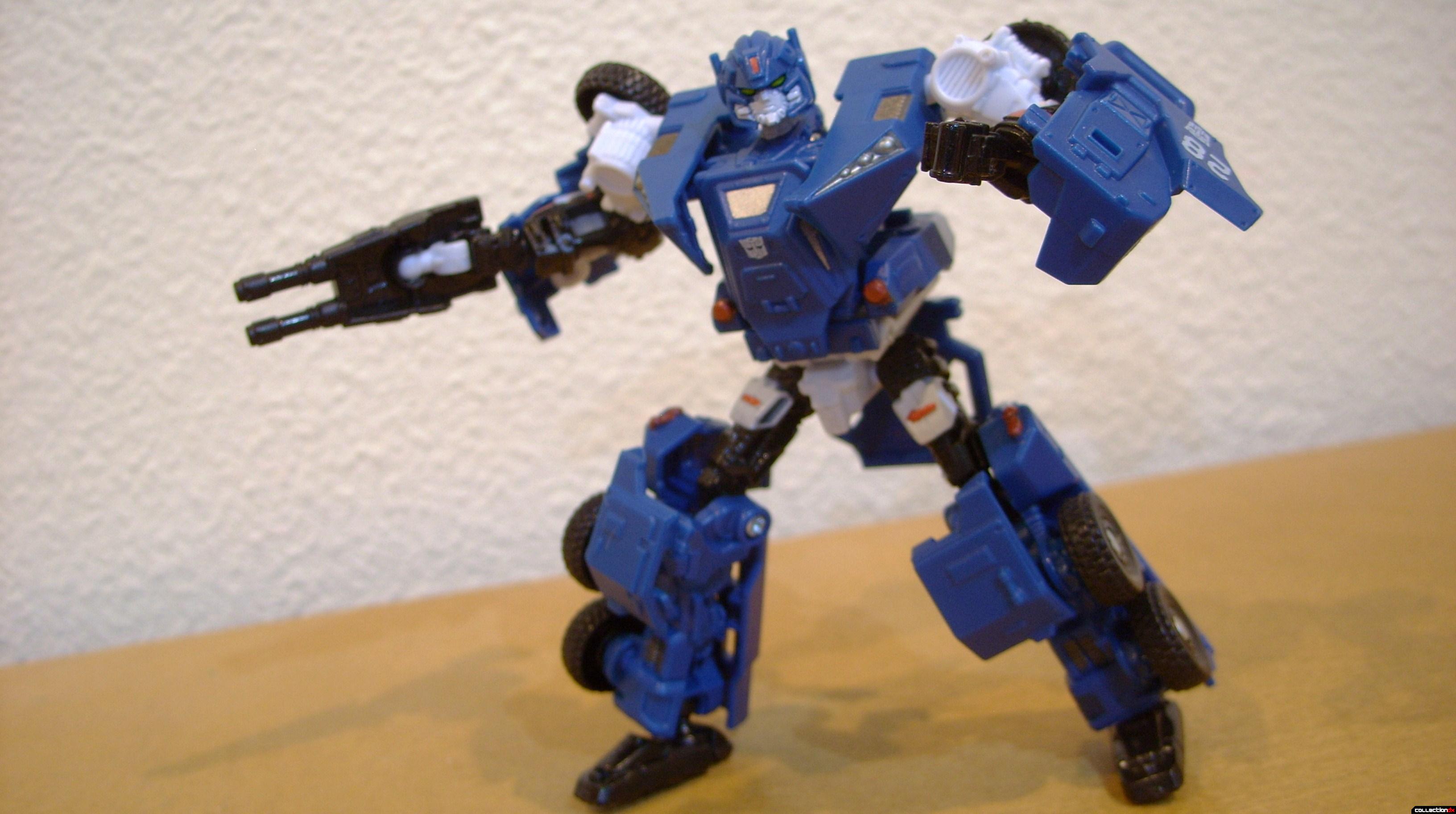 The biggest impression here is that the rifle doesn’t get held on to in the regular fashion, but rather clips on, which I found satisfying. Kinda kills me the waist couldn’t turn properly, though. What was awesome was how the turret got integrated directly into the waist rather than sitting like good kibble on the back or chest like other ‘bots have in the past. Very nice touch there. The color scheme rocks too, in my opinion, even if it’s not proper military camouflage. Perhaps a repaint of this design will appear in the future? My only disappointments are that the arm kibble and knee guards don’t snap into position better (which makes it difficult to grip them when posing).

Though difficult to hold on to at times with my big adult hands and a slightly challenging transformation, Scout-class Autobot Breacher totally makes up for it in appearance and features. Highly recommended!
The website thing, though, is not worth anyone’s time, including to kids. For as crap-tacular as the line’s name is, I expected something more. What a disappointment.

Love the head design. I really want Insecticon from the same wave.

I looked at Insecticon the day I got Breacher, and I decided not to get him.

I agree on the head design, love that it has a nose and mouth that looks normal.

Wha- you have a problem with the fragmented-metal look for Bayformers...? ;P

One of the best transformers ever. The head on mine doesn't come off. Waist articulation is pretty overrated, he can do a natural looking salsa, it's impressive he even has it for his size, considering no Leader class toy has since... Cybertron Megatron if you count that 20 degrees. And yes, awesome head sculpt, good fusion of classics and movie design.

Cybertron Metroplex can spin his waist round and round, no questions asked. And though it looks awkward, Primus can kind of do that too.

Unless you meant Leader class Animated Megatron. (who is bad @$$) No Leader class toys since then (so far) have been able to do it.

Breacher is also supposed to team up with Voyager Class Seaspray, he fits into Seaspray's "back" in vehicle mode (you can use any scout class vehicle for this purpose, but it's specially made for Breacher to fint in there). Along with Skystalker, one of the best Scout Class figures out there IMO.

Oh and for those not liking the colors on Breacher (which i LOVE, btw), we are getting a Seaspray repaint (named Deep Dive, with Black/Green color Scheme) so I can see a repaint of Breacher coming too, just like the upcoming Strife (Mindwipe) and Sunspot (Skystalker).

BTW, head on mine doesn't como off.

Wow, thanks for, like, totally letting all the air out of my balloon... I was gonna save that part for a surprise for those who didn't know when I covered Sea Spray.

BTW, I NEVER saw Skystalker on the shelves, only Sunspot (which is a terrible repaint for such a bad-ass-lookin' bot.)

Any scout class? You mean even Hailstorm can fit? I have a hailstorm and if that's the case I'm gonna buy deep dive.