Well it's that exciting time again! With a new Transformers movie coming out this summer it's only natural for new toys to show up as well. With the inclusion of the Dinobots this time for Age of Extinction I initially was pretty unexcited by the news. I expected near identical looking grey and metallic Transformers that would just be pretty standard and skippable.

And man have I never been happier to be wrong. The first look at the various Dinobots other than Grimlock were a rainbow explosion of colors and delightfully characterful sculpts. They almost looked like they belonged in their own cartoon property instead of the movie. After just a couple of still images, I made a complete 180 turn from being indifferent to very much excited about the new upcoming toys. 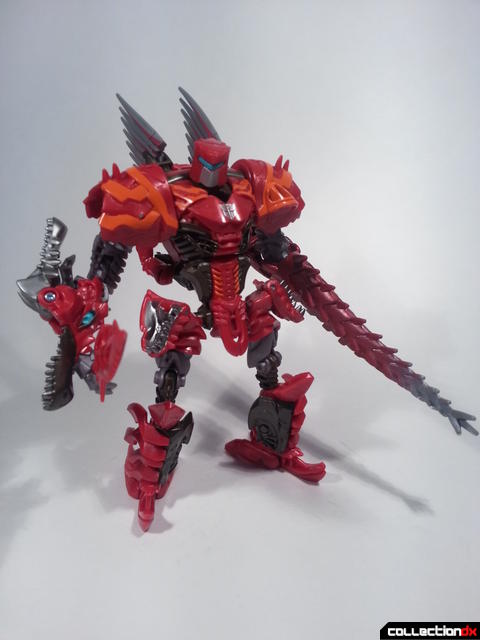 The movie toys are actually dated for street release on May 17, but a few stores have gone ahead and put them out a little early, which is how I managed to get a hold of today's review topic: Scorn.

Scorn is a bright red spinosaurus covered in loads of spiky bits and who generally looks like he's made of knives and shrapnel. It makes these Dinobots look intimidating and impressive in their sculpt. Now, I know nothing about dinosaurs and about how accurate they look, but this thing looks pretty accurate to me alright. 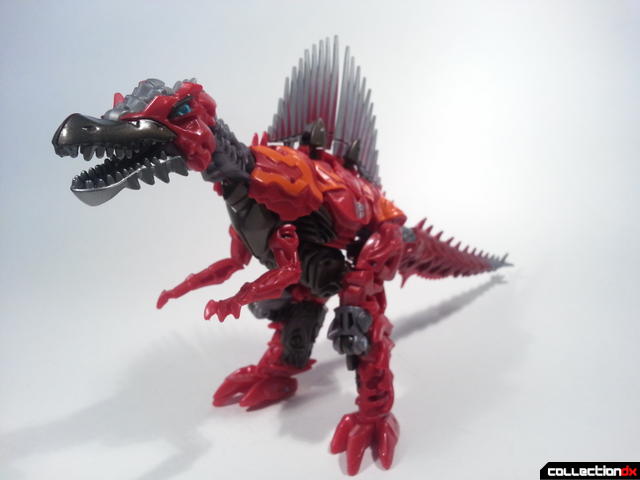 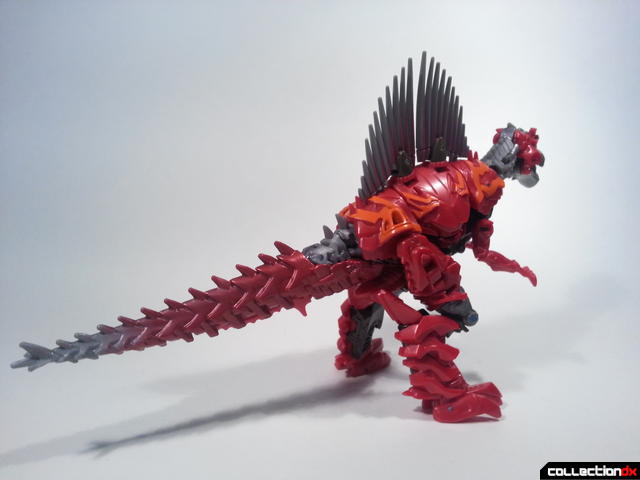 The articulation in Dinobot mode is pretty good. The legs are ball jointed and the double jointed knees can lend well to some varied poses. The addition of ball jointed tiny arms make him very emotive and also kind of adorable. 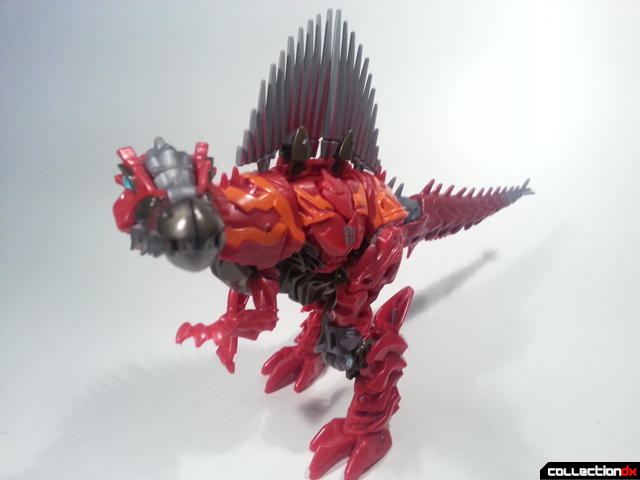 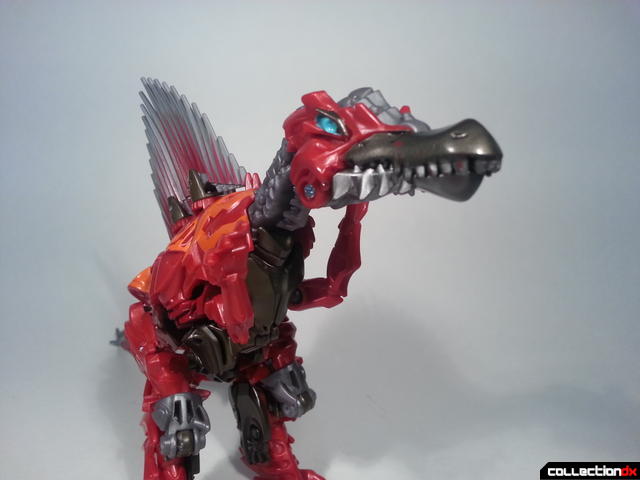 The head articulation is really awesome, with a swivel at the bottom of the neck, along with another swivel at the top of the neck. That combined with a tilting head and opening jaw means this guy is pretty expressive despite his small size. 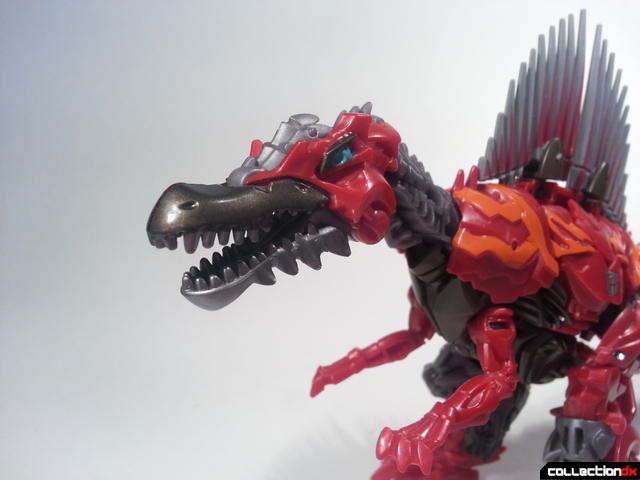 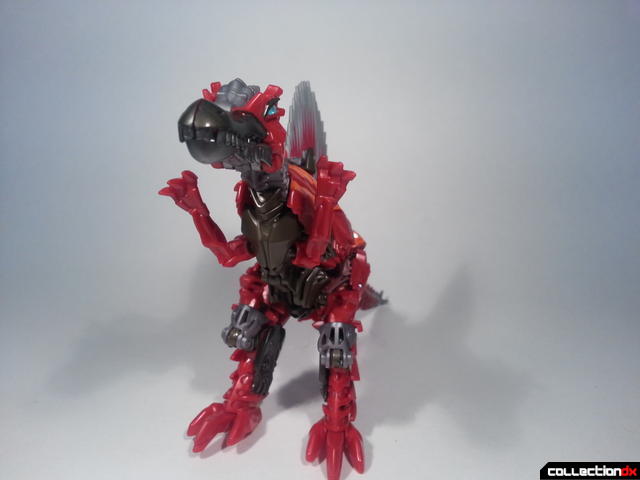 Transformation on Scorn is pretty simple, but fun. It reminds me a whole bunch of how the original Beast Wars Megatron turned out, especially with how the robot mode turns out. 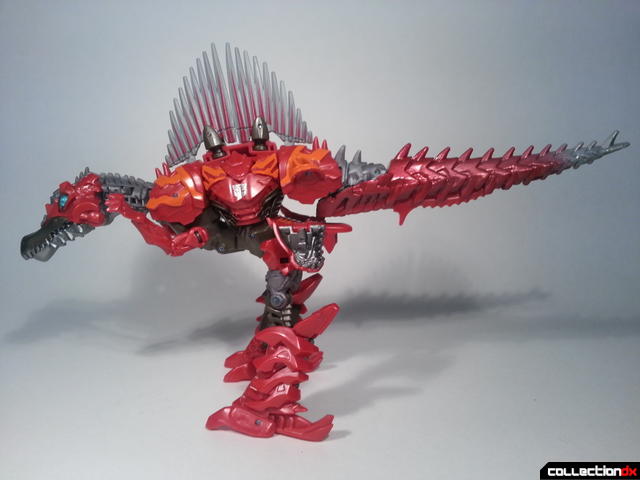 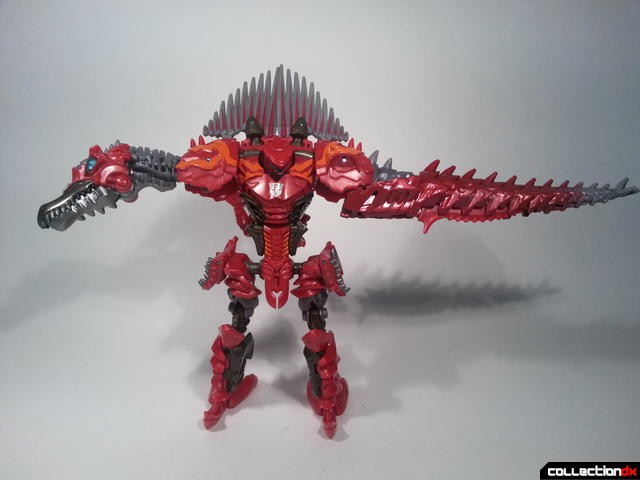 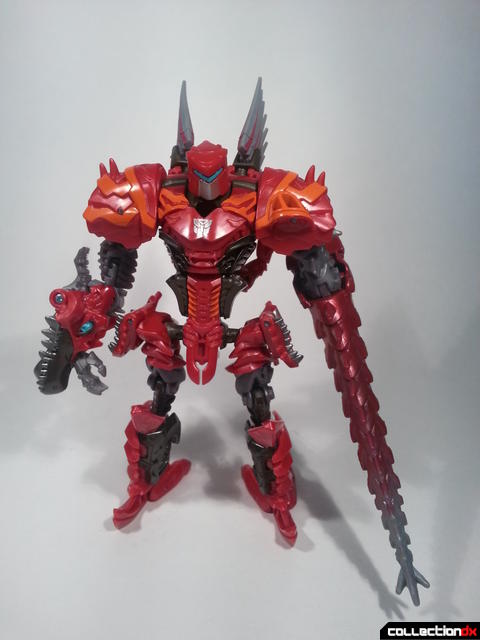 The robot mode sculpt on Scorn has an interesting knight theme to it, and I absolutely love it. The headsculpt in particular is very medieval in its design and looks great. It's a unified look that the Dinobots all share and really strengthens them as a coherent group of Transformers. 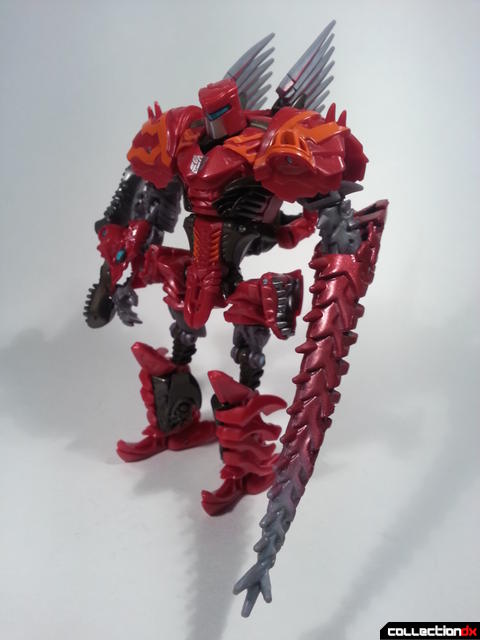 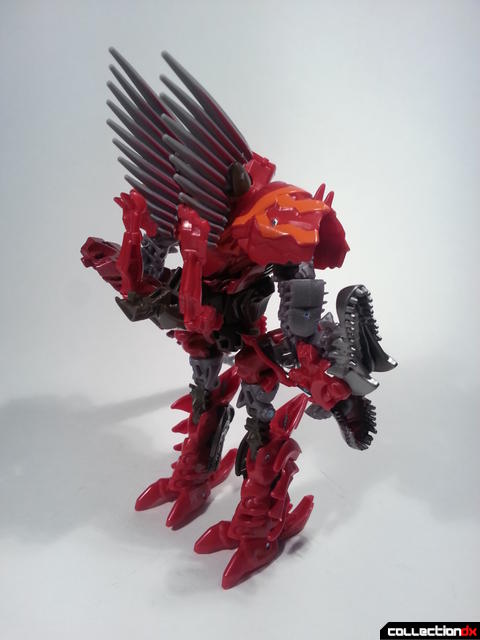 Between the one dinosaur head for an arm, and a tail for the other Scorn greatly resembles Beast Wars Megatron in a pretty neat way. Although because he's much smaller and slender, it makes him look like a real scrappy little fighter. You're supposed to actually flare out his lower legs in robot mode, but I often tend to forget to do it. It does help bulk him out a little bit more to differentiate his robot and dinosaur mode. 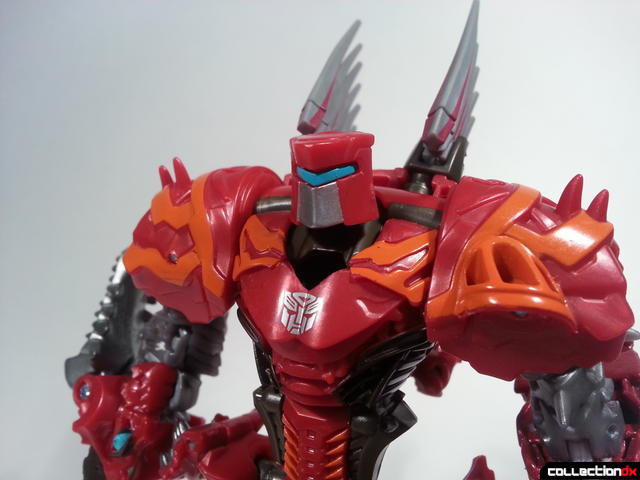 The articulation is pretty decent on Scorn, and he has everything he needs to be a fun toy. His head is a little limited despite being ball jointed, because it is almost always angled while turning. He can look up really well though. His arms are entirely on a set of swivels, but they're very effective. His hips are ball jointed, and having both thigh swivels and double jointed knees (due to transformation) makes him more than adequate. 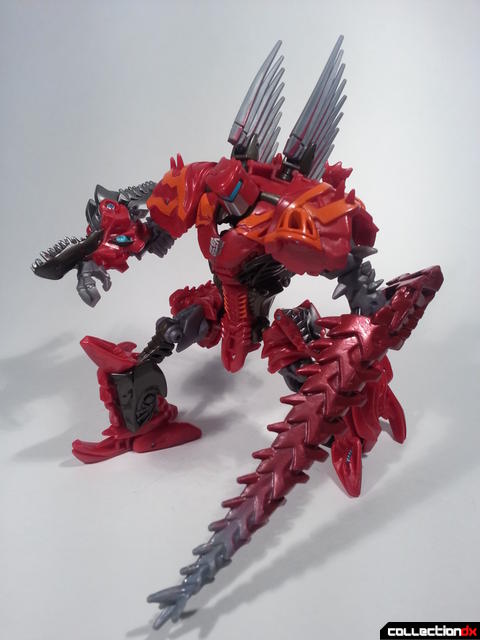 His right arm has the dinosaur head attached, and can be used in a few ways. The instructions say to leave the head open for robot mode, but that also means you have a giant hole in his forearm. I prefer to keep it closed up so that gap is gone. 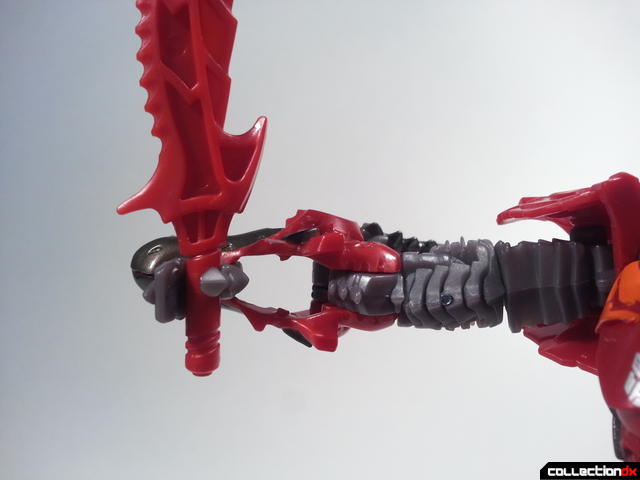 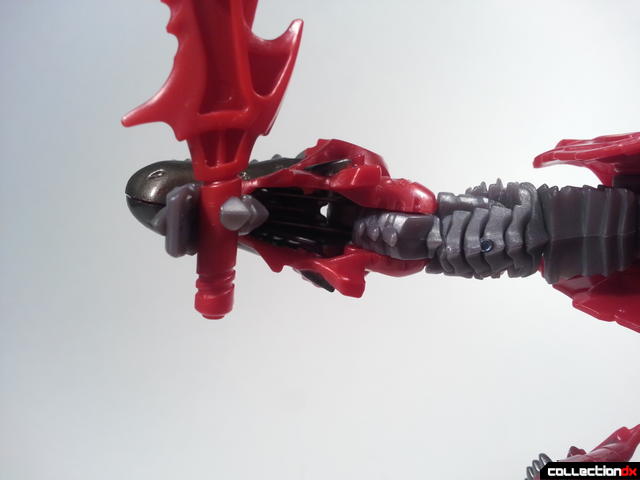 You can also turn the head around to give him a dinosaur head for an arm, which is also another neat feature. 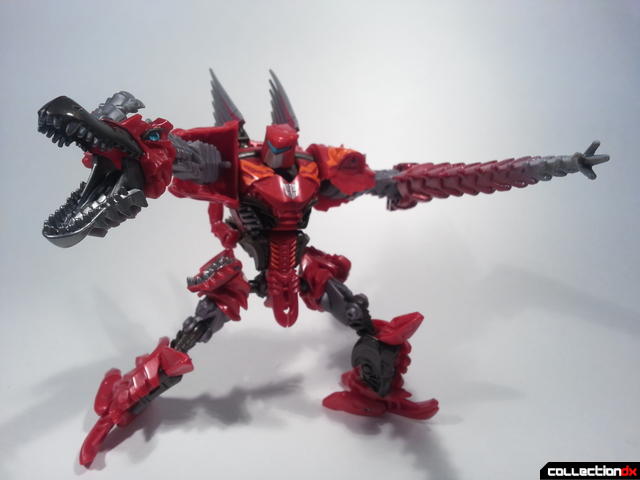 Now, despite having a tail for an arm which would usually be a bad thing, it actually works out alright. Given a lot of his knight-like themes it seems suitable for Scorn to have what is essentially a giant lance or spear for an arm. I can see this guy just running up to Decepticons stabbing and slashing his way through every in a delightfully violent fashion. 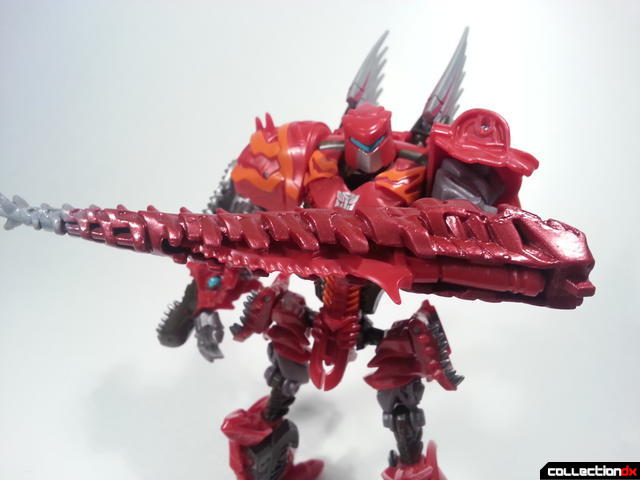 The tail also features some weapon storage. The underside also holds a small sword for Scorn to hold in his other hand. Between the sword and his tail, Scorn is ready for a mean skirmish. 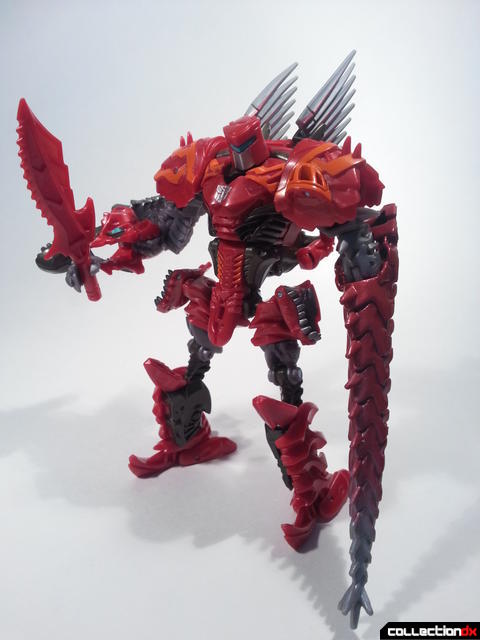 So that's Scorn in a nutshell. He's a simple but fun little Transformer that's loaded with character. I was originally very uninterested in these guys, but after getting one in hand I'm debating getting a hold of all of the Deluxe Dinobots for their unified scheme and overall fun factor. If you see these guys show up this weekend, check our Scorn or Slag. I think they're well worth your time. 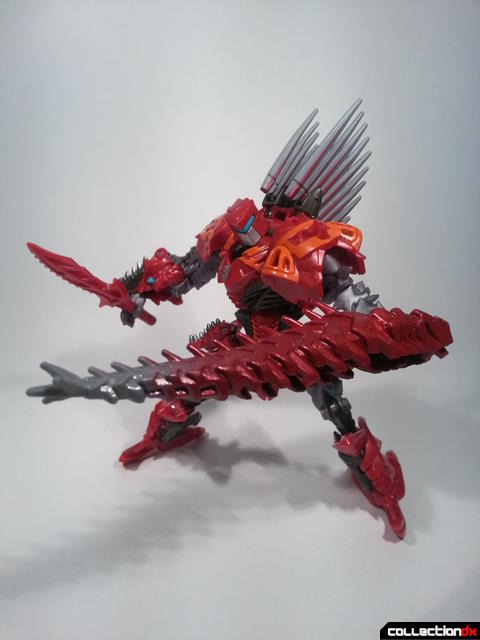 3 comments posted
Oh what is this here

Design-wise, the new Dinobots are incredible. Color wise? They look like they belong in a higher-budget version of Super Sentai. Yay for Scorn being a dimetrodon, they don't get much love. I think Abaranger had a dimeterodon mecha.

:O I hope the new MMPR when it eventually comes out has zords with this level of detail.