When in their normal Ranger forms, the Samurai Rangers use their Spin Sword to summon Symbol Power and fight the Nighloks. But when a Nighlok is first defeated, they will rise up again as a giant-sized mega monster! Using Symbol Power, the Samurai Rangers grow their palm-sized Foldingzords into larger robots that can combine into a humanoid machine known as a Megazord! But in order to control the Foldingzords from within, each Ranger undergoes a special transformation to Mega Mode, and their Spin Swords convert into a control device called a Samurai Mega Blade. With a Mega Blade inserted into the control column, they can command their Foldingzords individually, or when combined as a Megazord. And when a finishing attack is needed, they convert their Mega Blades into katana form for the heaviest of striking power.

(This is my name for it, since it has no such labeling in the show.) 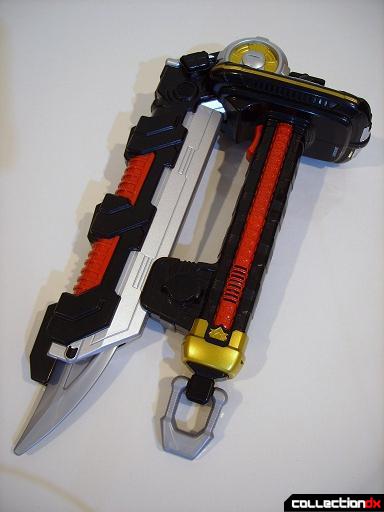 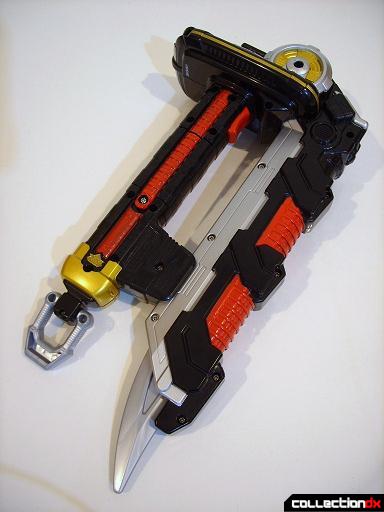 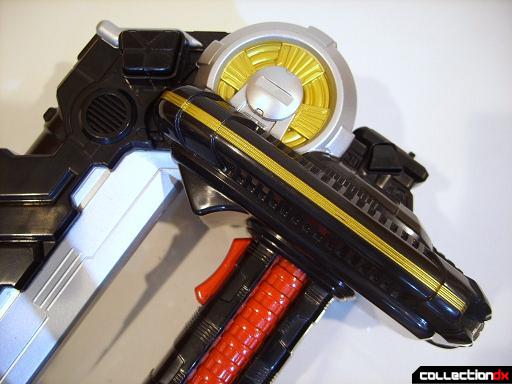 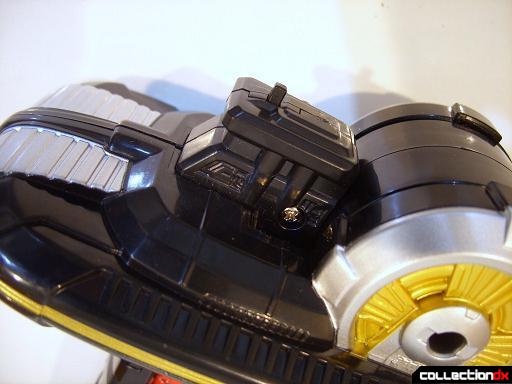 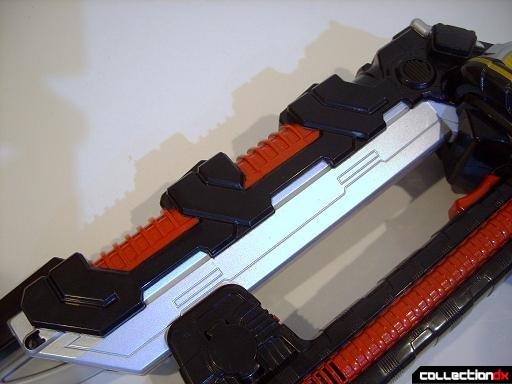 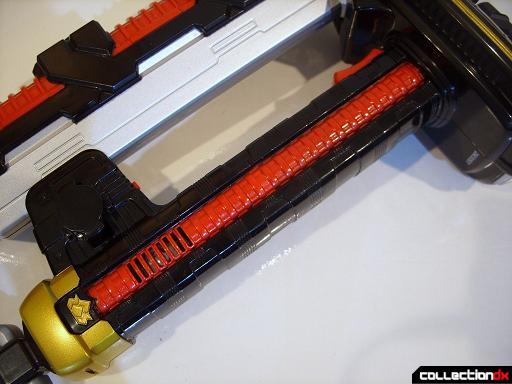 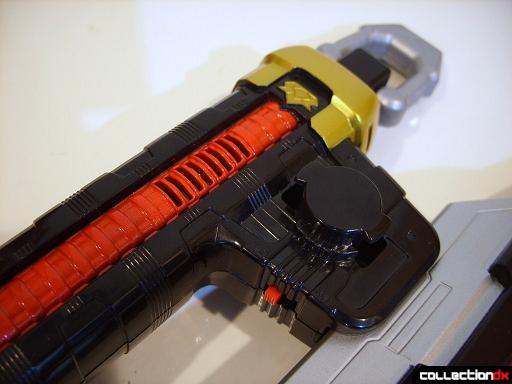 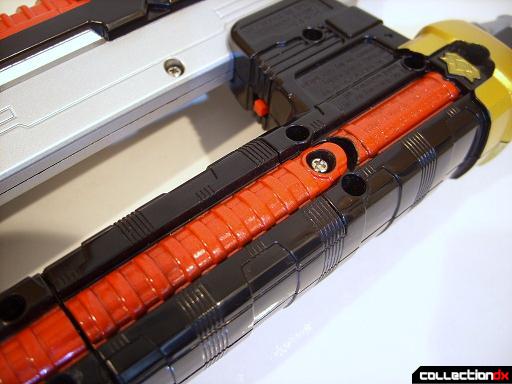 The Mega Blade has no function to it in this mode unless the batteries are turned on. However, it can be attached to the provided light-gray PVC accessory clip-on and hung from the edge of your pants or a belt. (The accessory clip-on is not seen in the show.) 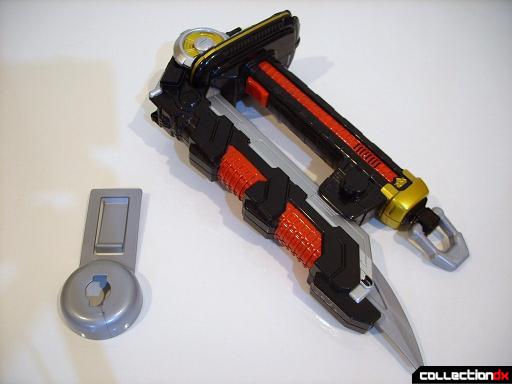 Transforming the Mega Blade is an easy one-step process. Holding it by the handle, reach around with the other hand to grab the loop on the bottom of the grip and pull on it slightly. When the loop is pulled, the blade will spring swiftly around by itself and extend to its full length! 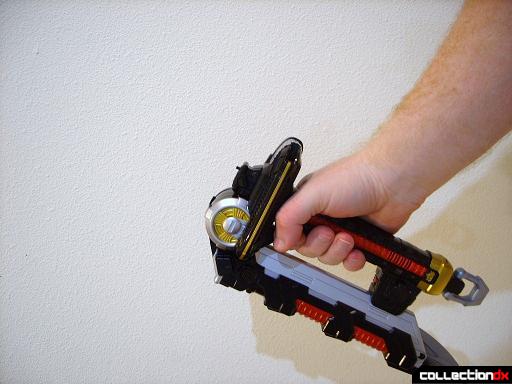 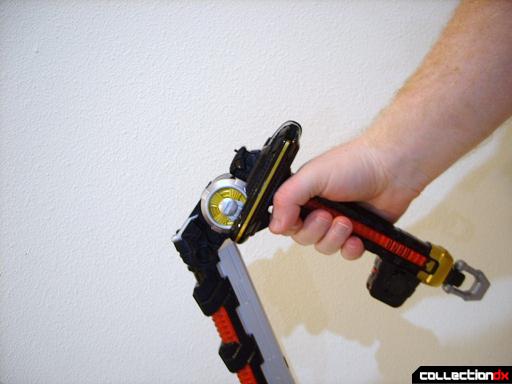 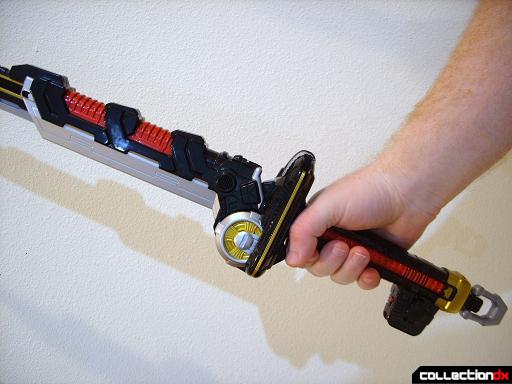 Changing back is easy- push the tip of the blade inwards about 9” until it locks, and swing the rest of the sword’s length back around until it snaps back into place.

The Mega Blade has no moving parts or special features in this mode either. The top half of the light-gray blade is soft PVC to prevent serious injury. 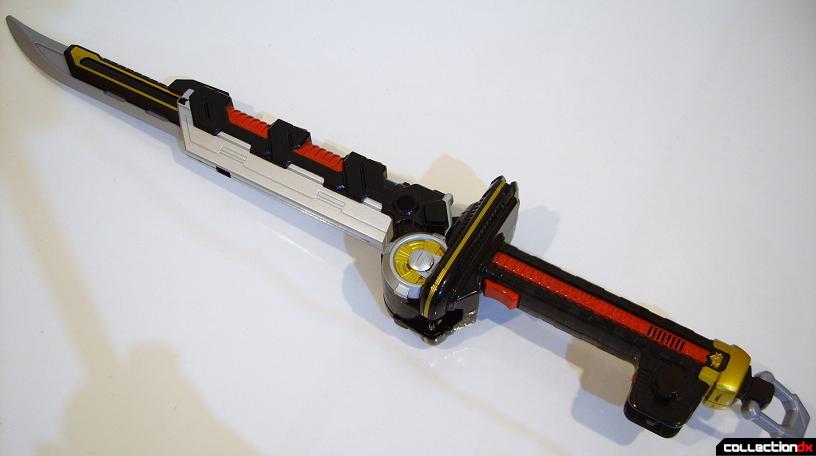 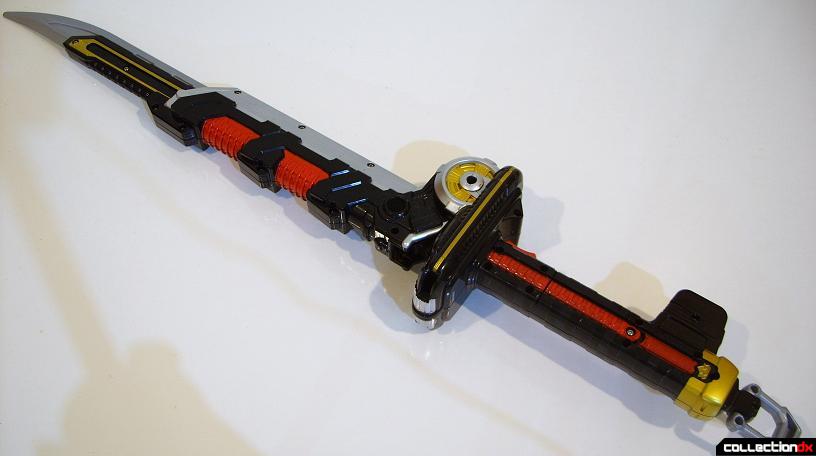 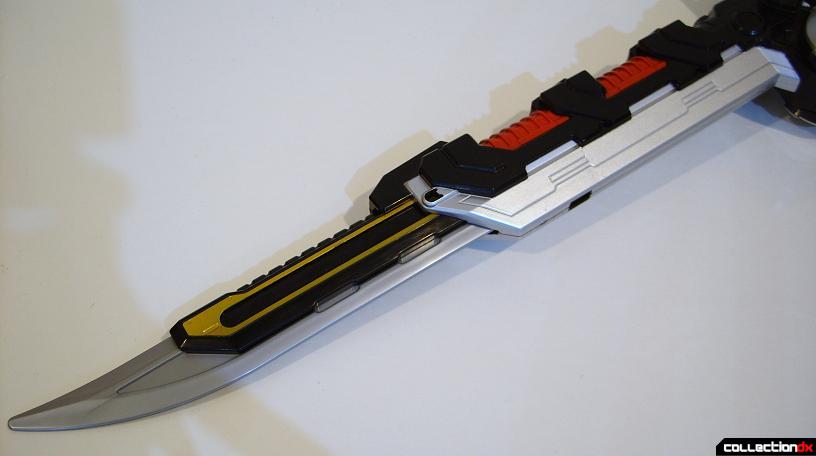 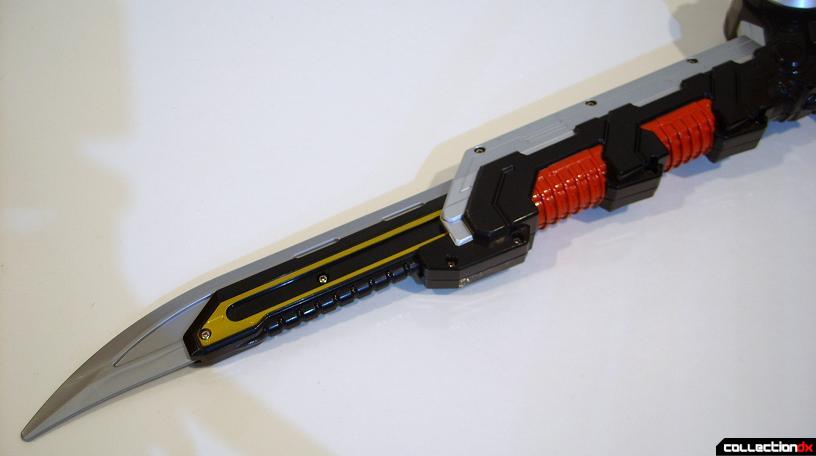 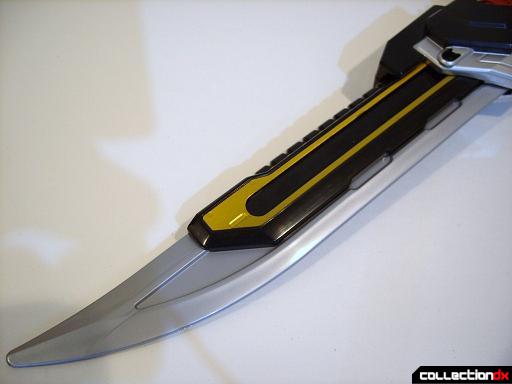 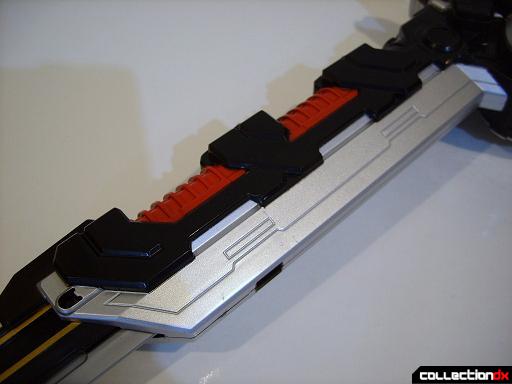 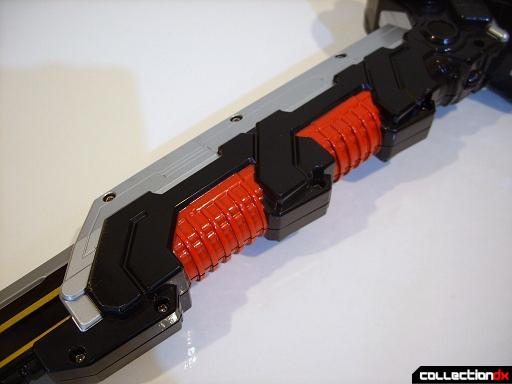 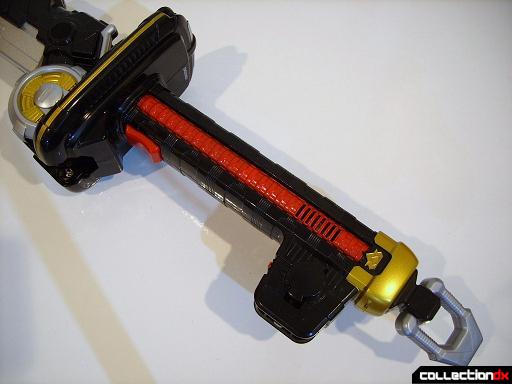 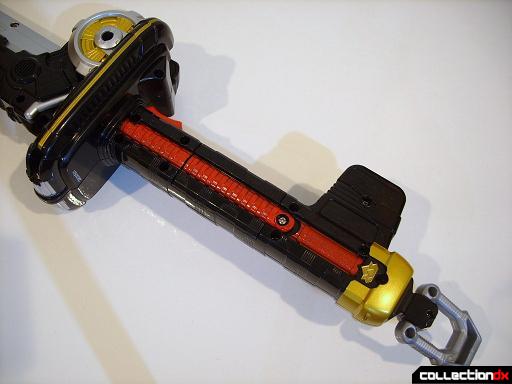 When the batteries- two AAA-sized, already provided installed- are turned on, it will make an acknowledging sound effect.

When the trigger is squeezed, a charging-up sound will begin cycling. It will play 20 times and then shut-off on its own, or when you extend the blade to Katana Mode, a transformation sound will play. (There are no other sounds in Control Stick Mode.)
In Katana Mode, when the trigger is squeezed, you will get a number of sound effects, depending on how many times you pull down on the loop below the weapon’s grip.

Each of these will play every time you squeeze the trigger until you pull on the hoop to switch it to playing a different sound.

When transforming the Mega Blade into either mode, a specialized set of sound effects will play.

(There are no lights in this toy.)

I have not closely monitored any Power Rangers series since 2005. My interest has waned since I switched over to the original Super Sentai Series from Japan. I vaguely know the Americanized plots and some names, but that’s about it. The toys, on the other hand, have been no interest to me for a longer time, being as most of them don’t appear in the show, and what does appear in the show sometimes doesn’t become a toy, or it’s a toy that’s nowhere near as interesting as what was portrayed on the screen. Super Sentai fulfills my needs now on many levels.
When the Power Rangers franchise was acquired by Saban Brands in 2010 (after the original Saban Entertainment was purchased by The Walt Disney Company in 2000), I was understandably curious to see what would happen to the tone of what would become known as “Power Rangers Samurai” in 2011. Though following much closer to its Super Sentai roots in “Samurai Sentai Shinkenger” (2009) than any other PR title before it, “PRS” retained many of the traits that had eventually driven me away.

When I initially saw this toy- and having not followed “PRS” closely since the first episode- I figured that it was yet-another toy that Bandai America can come up with on their own which had not appeared in the show. At a glance, it looks sufficiently techy for my needs, but it wasn’t in the show, so I didn’t give it a second thought. However, I kept hearing many collectors over the months going on-and-on that it was a surprisingly-well designed and -made toy, so I decided another look might be worth it since I was on the fence about it initially anyways…

I must confess now that I have been taken in by the strength of this design! Its purpose is similar to the Hiden Saiseitou ShinkenMaru (aka Spin Sword) from “Shinkenger”, but its appearance and function are dramatically different.
(In the transition from “Shinkenger” to “PRS”, the cockpit and control designs between the original Origami mecha and the Folding Zords was completely reinvented to eliminate much of the Japanese cultural references from the former and make it more generically-placed in an American children’s TV series. The Mega Blade is a result of this transition, whereas in “Shinkenger” the ShinkenMaru remained the same.) 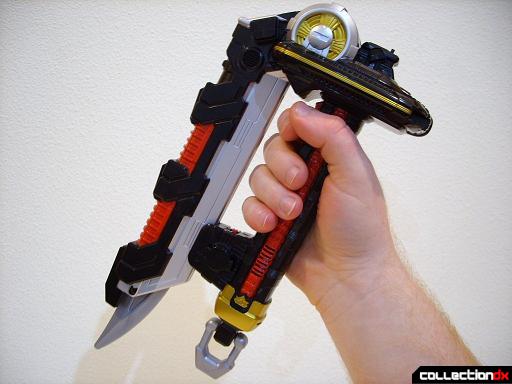 The disappointing thing for me in Control Stick Mode is that it only has one sound in it when you squeeze the trigger, as opposed to the multiple alternate sounds in Katana Mode; how it switches between those sounds (pulling the loop) is the key part of the problem. The speaker is surprising loud-yet-clear too! I am not disappointed, though, that a light source of some kind was not integrated just for the sake of having one there, as past designs have.
If there had been some kind of separately-sold interactive electronic display base which mimicked what was seen on the show, I would have been quite impressed! As it is now, Control Stick Mode serves as nothing more than a storage form for the Katana Mode. (In a way, though, it does remind me of the G-controller device from “After War Gundam-X” in 1996.)

Electronics aside, the one thing that I kept hearing in other reviews was how large Katana Mode is. They’re right- it’s HUGE! 25” from tip-to-tip may very well make it the longest non-combining Power Rangers role-play toy ever! When I showed it to my mother the first time, and the blade sprung outwards, her first reaction was “Oh my gawd-!” Then her second reaction was “That thing looks dangerous!” (As in ‘impressive and imposing’, not that it was a hazardous toy, mind you.)
For me, it’s not just that it auto-transforms- which, by itself, is very awesome- but that that extra 9” of blade pops out suddenly right at the end of the main part of the blade swinging around on its own.
(It goes without saying that you need to hold this thing the correct way or you’re gonna surprise yourself when it swings around and whacks you. It won’t cause damage- in fact the spring in the rotating joint isn’t that powerful even though it gets the job done- but you‘ll be sure not to do it again!) 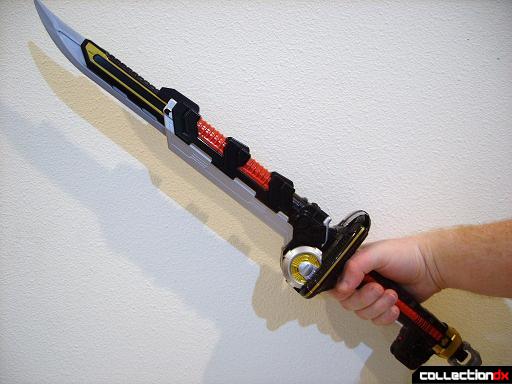 The sound effects for the most part are also taken directly from the ShinkenMaru, and are appropriately selected, though I wish more than the Lion Foldingzord would sound-out. The two transformation sounds are quite nice too. And though it has a flavor like a bootleg for doing this, I actually laughed at the “rock/oriental-stylized music” and have accepted it in a surprisingly-natural way.

Though the techy details are rather misplaced amongst the traditional and simplistic styling of ancient Japanese samurai, as a stand-alone it is very cool. It has presence, it looks threatening, it has two well-thought-out features, and it’ll be an absolute disaster when your kid starts swinging this thing all over the place because of how bloody enormous it is! (The handle is quite large too, by the way, so that kids can duel-wield it. Excellent.) Even though it wasn’t in “Shinkenger”, the Samurai Mega Blade is the sleeper winner of the “Power Rangers Samurai” toy line thus far, in my opinion. Strongly recommended!

4 comments posted
I haven't been keeping up with Samurai either,

But I do hear some nice things about the show and the toys as well. And I admit, the clip before your review--with the remixed original Mighty Morphin theme--gave me chills. The only items from Samurai I have are figures of Mega Mode Red and Yellow and "basic" Red (all of which are pretty nice figures on their own; they're my favorite "pick up and fiddle with while waiting between Mass Effect loading screens" toys.)

But you've made a case for the Mega Blade. I wouldn't be surprised if one day I'm walking through Walmart and just go, "To hell with it," and pick this up.

Yeah, I'm trying to- no pun intended- figure out how Bandai thinks the "Shinkenger" brand will serve them any good over here. I certainly get the timing, but not their reasoning. I don't follow Figuarts sets, but I imagine some changes were made for the US release to make them more affordable... otherwise it'd be no different from just buying from a Japanese store online and hauling it across the pond.

Yeah, the Mega Blade is both cheap, well designed, and fun- an odd combination for BA these days.

...If they hadn't shot themselves in the foot by keeping the "Shinkenger" name on the boxes, thereby confusing many potential buyers, and reducing the likelihood of further imports.

It wasn't actually to remove Japanese cultural references. Like, at all. The new cockpit design still has Japanese culture influences, looking kinda like a stone temple. The Plex guy who designed the original Shinkenger cockpits was never happy with them, so when PRS had to redo cockpit footage he was happy to redesign them and design the Mega Mode suits (Which were done to generate a second set of action figures thereby making more money).
Redoing the cockpit footage and morphs was necessitated by the toyline, where to save money Bandai America dropped the brush mode. Keeping that mode's heavy use when it wasn't on the toy would have been false advertising, so...