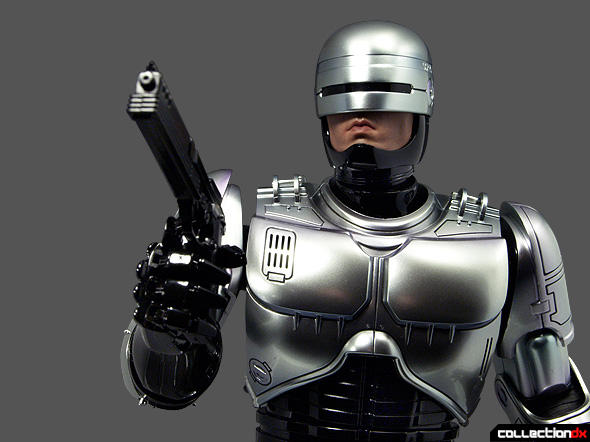 When Hot Toys announced this new version of RoboCop, I was pretty excited: the original release by Hot Toys was good, but the overall proportions and soft face sculpt made me hesitant to purchase one. This new version however looked excellent and really made me want to own it as soon as I could.

Now having one in my collection after buying “Fast Stock” (first Hot Toys batch Hong Kong release) I felt almost compelled to take photos and share my thoughts as I was very impressed with this figure upon opening the box. 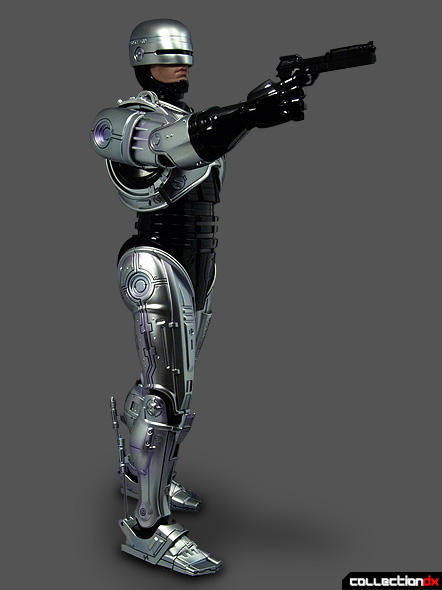 This is Hot Toys second attempt at Robocop and even though the first one was pretty impressive at the time, this one blows it out of the water! Not only is RoboCop better proportioned, but he is even more detailed too! I ended up re-watching the first RoboCop movie as research. I’m not going to scrutinise the overall figure intensely, but it’s pretty obvious that it’s instantly recognisable as the original 1980s RoboCop we all know and love. 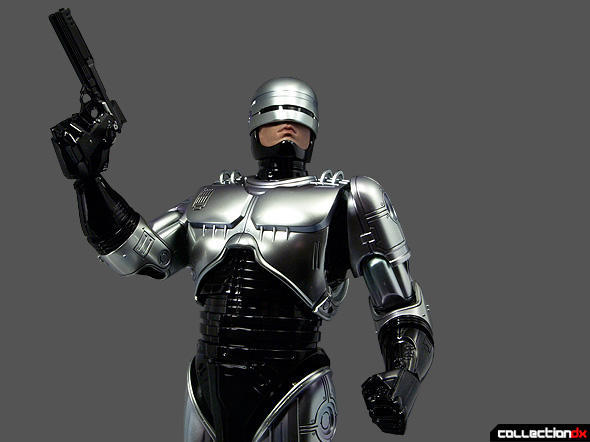 I’m not an expert when it comes to different types of paint, but to the best of my knowledge it appears that Hot Toys have used a type of pearlescent paint over the blue/grey/sliver armour and the results are breathe taking. We all know Hot Toys keeps pushing the measuring stick for paint application, (especially with metallic finishes with their Iron Man figures) but this time they have really out done themselves! It really captures the look of the armour from the movie quite beautifully and coupled with the excellent sculpting really makes RoboCop stand out!

The rest of the armour is a glossy black colour and looks just as good, the paint on the face pieces is up to Hot Toys usual standards as well. 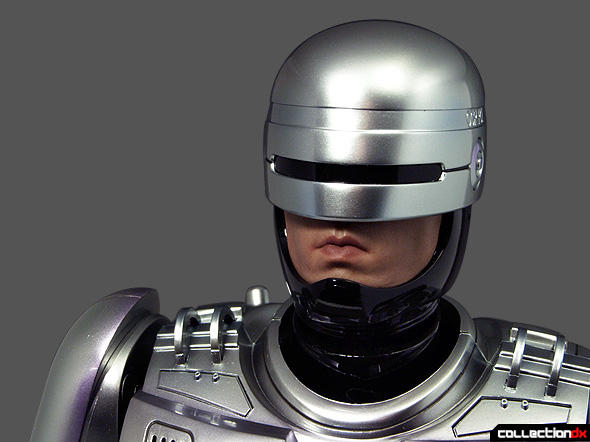 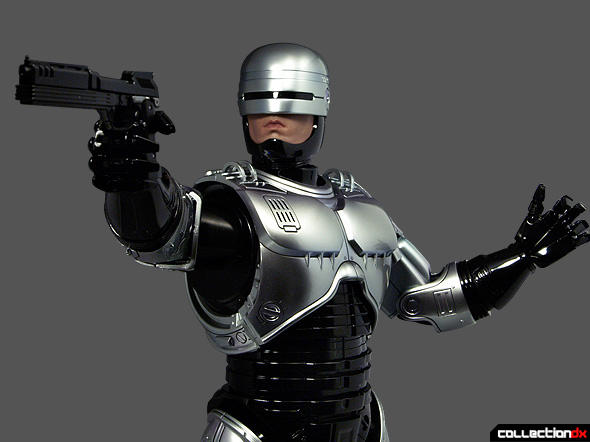 The box is typical of all Diecast releases so far cardboard and plastic outer sleeve with styrofoam tray inside. 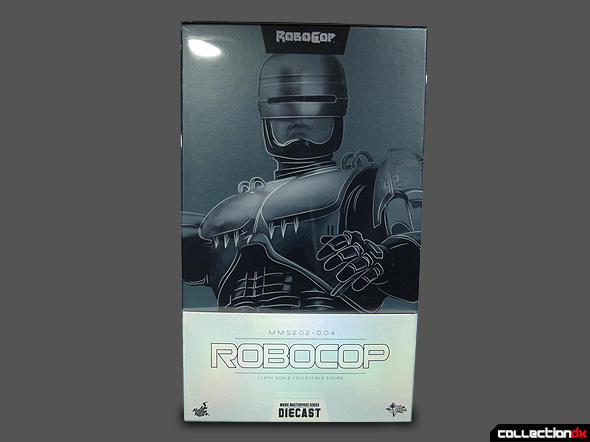 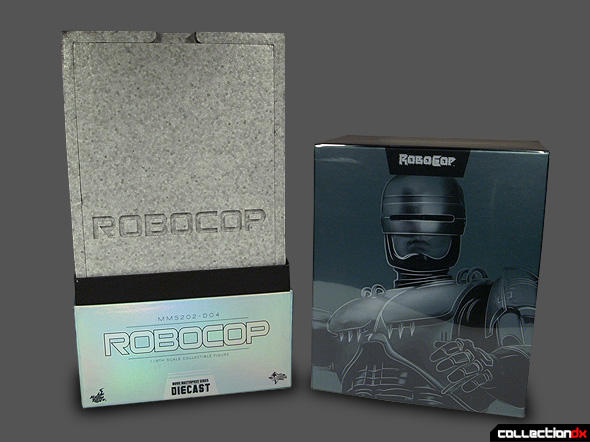 RoboCop features some great articulation: ball jointed head and neck, ball jointed shoulders, hinge elbows, ball jointed wrists, articulation hands, swivel waist, upper body ab crunch, ball jointed thighs, swivel shins, hinge knees, hinge ankles. Most of these joints allow for a good range of motion and poses, even though most poses you would want to put RoboCop in involve being in a standing position and holding his gun. You won’t be able to put him in any extreme poses however, as the overall design does limit RoboCop a bit. Hot Toys have tried hard to give you extra help on certain restrictive parts, like the shoulders for example, where you can pull them out further then normally allowed, if required, to pose them a bit more easily. 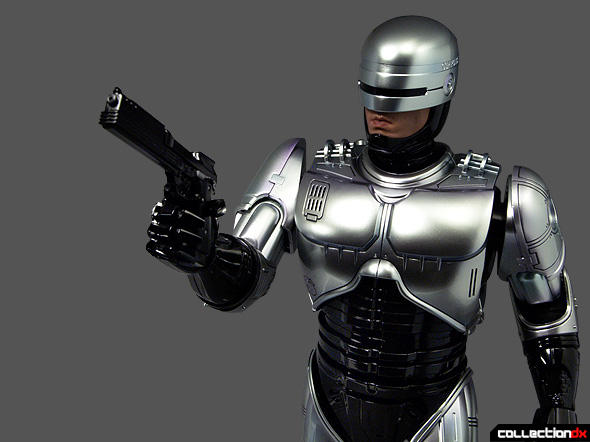 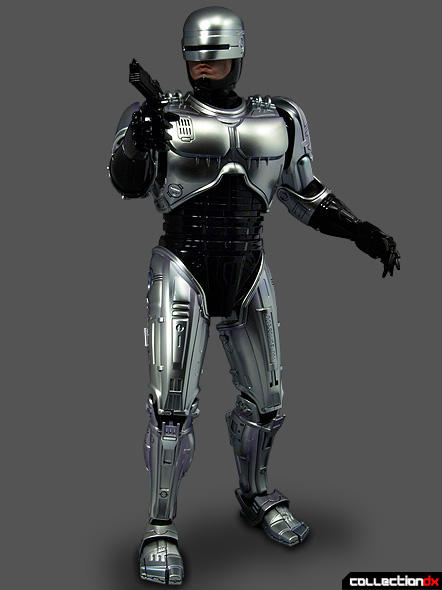 This is the standard RoboCop release without the docking station, therefore when compared to that version he’s a little light on accessories. You get a couple of hands, extra face pieces, two guns, the sound feature remote and one of those giant hexagonal bases. The extra face pieces are a great addition and you can really add some character to Robocop when posing him. It’s obvious most of the face plates are meant to be used with the docking chair, but it’s still great the normal release has included them. 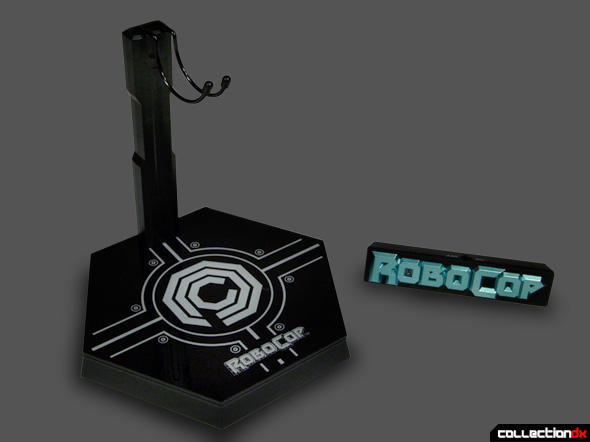 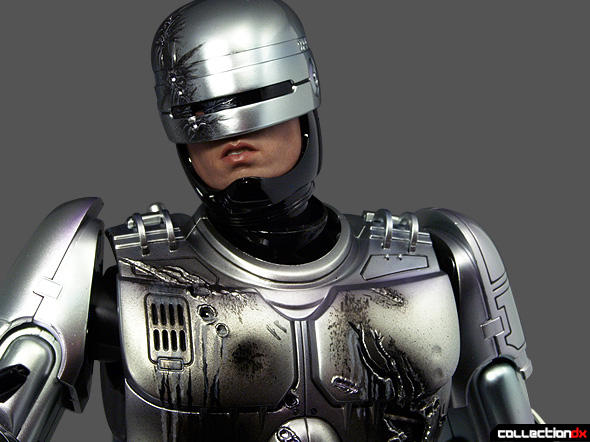 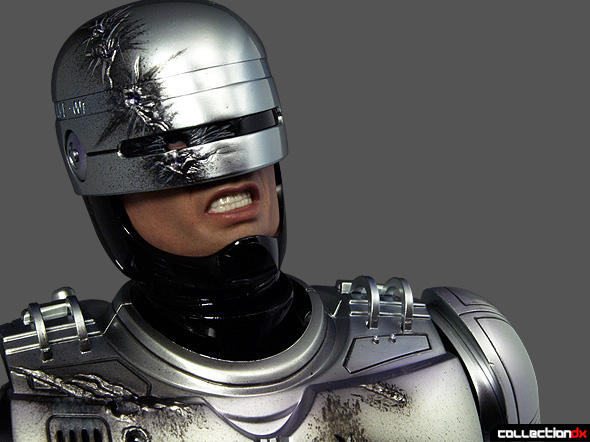 The included damaged helmet and upper torso armour are excellent too; these switchable pieces are great and quite easy to change too. It’s nice to have a bit of variant to having a clean looking figure. 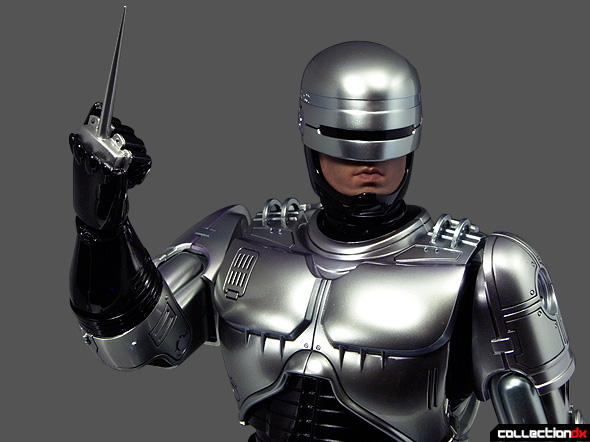 The articulated hands are great too, it can be a little tricky getting the gun to stay in his hand at first. The best part about the articulated hands is that you can use them to further add little bits of flare to your poses not to mention it gives you a lot more freedom of choice too. 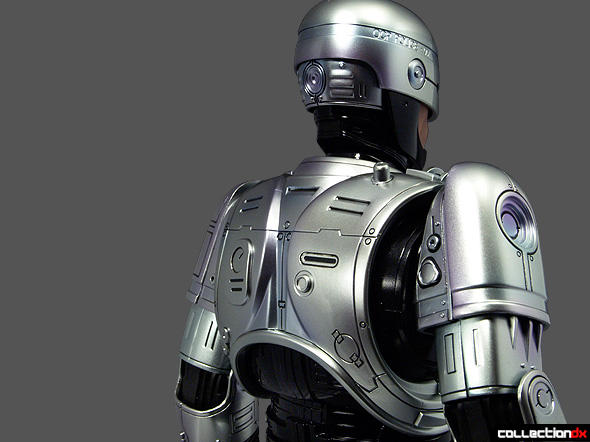 Both guns look great as well and look very accurate to the source material. According to the instructions, the diecast version is to be used only in the thigh holster, with the plastic one being used for posing. 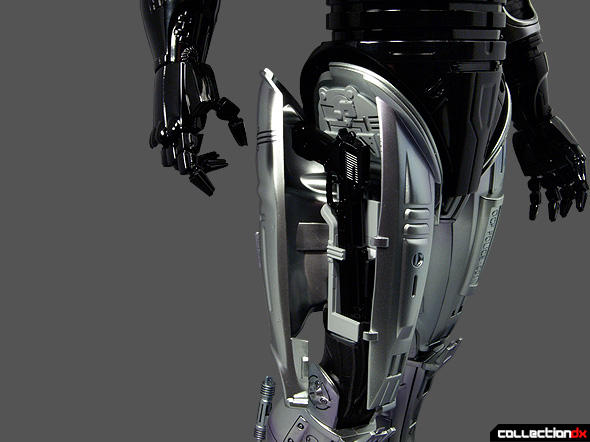 Only a couple of things to look out for: first issue I had was when using the base supplied with the figure, I noticed when adjusting RoboCop on the stand, his feet scratched it up a lot - so much so that I might need to buy a loose one from eBay. Second was that the legs where they meet the groin can be a little stiff when you are trying to slightly adjust them, so much so that nine out of ten times I over adjusted them when I was trying to just slightly repose a leg. 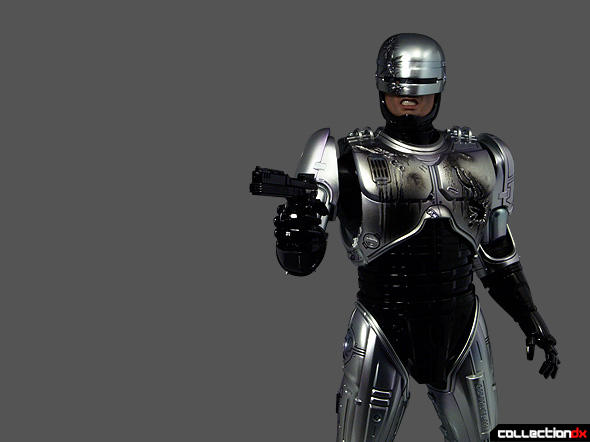 Besides these two main issues I noticed everything else is run of the mill. There might be small blemishes on the paint finish due to the mass production process, but nothing too serious. I also wonder how long his ankle joints will hold up for seeing they are holding up a lot of weight. 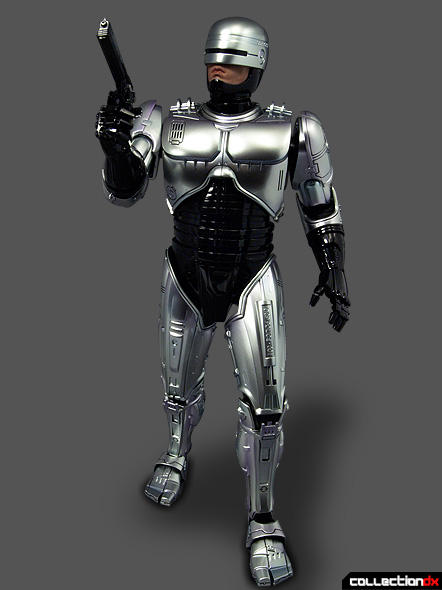 RoboCop features a number of movie phrases which can be activated by a small remote control included with the figure. The phrases are taken straight from the movie itself and not just rerecorded by another voice actor, it’s a pretty neat feature, but one I won’t be using a lot, if at all. 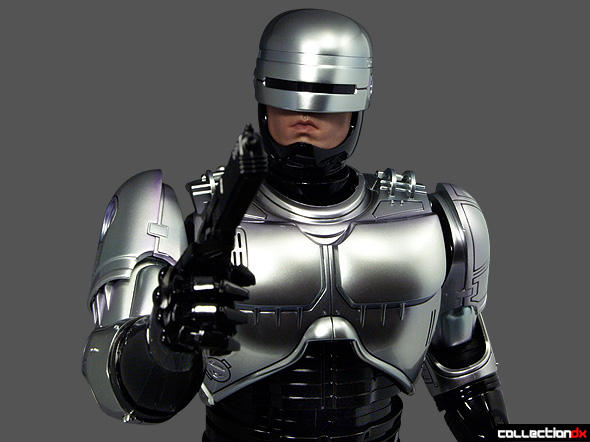 Hot Toys have really achieved something special with this 2.0 version of RoboCop, it improves on, and easily surpasses the original version in every way. If you have the original one, it’s definitely worth up grading to the new version as it’s just too good to pass on if you are a RoboCop fan 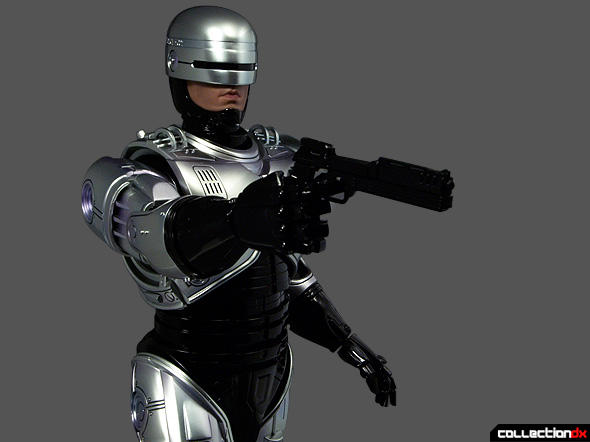 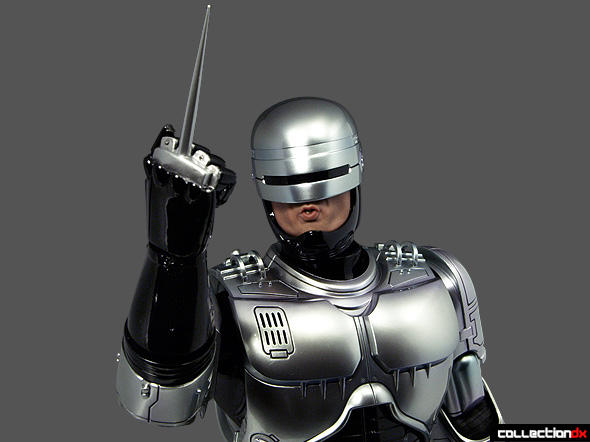 What/ where is the diecast content? Where/ how is rubber used?

The diecast components, going by pictures online and how the figure feels in hand, appear to be the shoulders and the calfs on the figure, much like the Iron Man Hts the rubber is used to cover the joints on the elbows.

A lot of people seemed to be unhappy with the lack of diecast in this figure, but it makes sense as the chest houses the sound feature, so they couldn't really use it there, for example. I think they have really used the most non-intrusive parts that won't effect the articulation much too.

It still has a good amount of weight to it, like the other HT diecast figures and even says in the instructions to be careful not to drop it on your foot or the floor by mistake due to the weight!

So I really hope Robo doesn't tip over in the future, due to this weight and take himself or something else out with him.