As a child I most certainly watched Power Rangers. I was intrigued by the previews showing grainy images of big robots fighting big monsters. Something seemed kind of different about the show. By the time the second season came around, my neighbor had gotten a few of the robots with strange Japanese boxes. The local comic book shop was selling Dairanger toys straight from Japan. I eyed the Wontiger for a little bit before probably deciding on some Macross model kits or that transforming jet fighter thing I reviewed a while back. From then on I knew that this stuff was from the land of the rising Sun Vulcan.

Nowadays I can't really get into Power Rangers. Out of the three pillars of Tokusatsu series: Ultraman, Super Sentai, and Kamen Rider, it's those bug-eyed heroes that speak to the justice in my heart. Not that I want to begrudge the Americanized adaptations for doing what they do in the name of business, but I feel no reason to return to them. Some painful memories of Saban's Masked RI-DER and the trippy acid flasbacks to Big Bad Beetleborgs are not something I wish to experience again. Let's not even go into VR Troopers (We are V! R!). Statements from a certain Power Rangers writer with delusions of grandeur (who cares if Megaranger doesn't take place in space?) and the inherent weeabooness of my nature has made me decide that I don't need Uncle Saban's help anymore.

Before I get into the main review I would like to talk about the actress who played the Witch Bandora, known to us as Rita Repulsa. Machiko Soga (曽我 町子, Soga Machiko) was a very prominent actress who had been in many tokusatsu series. Usually she played some cackling, villainous woman with such wide-eyed fervor that even with the screeching dub voice it was hard to ignore her enthusiasm for evil. I have not watched Jyuranger, even though its title speaks to my heritage, but from what I've heard, the Witch Bandora was a mostly harmless villain who antagonized our plucky dinosaur riding heroes whilst singing her own theme song. I don't know much about Machiko Soga other than what I can read on Wikipedia, but from interviews with her, I can't help but see her as that quirky auntie everyone seems to have. As a side business, she ran a shop selling antique clothing, jewelry, and just about anything else you could see on her person either in or out of character.

Her final battle would not be filled with colorful explosions, rubber suits, or rock quarries as she passed away in May of 2006 due to cancer.

I guess Power Rangers is still popular, but I don't really follow it. For a special occasion, our gracious admin JoshB gave me a couple of toys as a gift. One was that new Decepitcon Scourge toy, and the other was the subject of this review.

Power Rangers has a veritable grand army of action figures. The ones I remember the most where the larger figures with articulated fingers that could sort of hold their weapons. Although, I could be thinking about the generic bootlegs that populated the local pharmacy. These days it's all about the three to five inch articulated actions figures. Most come with basic accessories (the smell of PVC is free), and even a few action features. Rita Repulsa is the original Power Rangers villain, so naturally she gets a modern action figure just to placate those nostalgic nerds who joined me watching Fox Kids each Saturday. 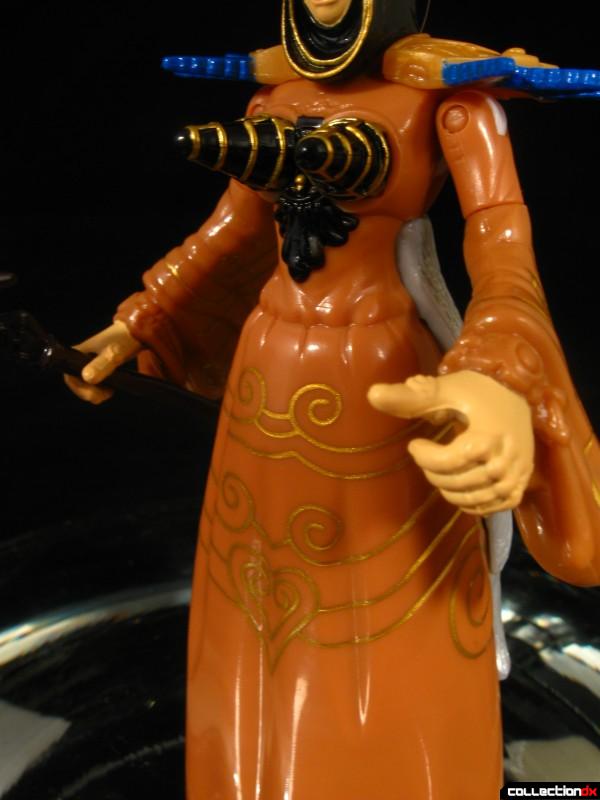 Rita stands roughly four and a half inches tall and is completely immobile below the waist. Underneath her solid plastic skirt is a pair of rubbery legs (with molded shoes). She does have little hexagonal holes in her heels, but her feet do not reach the ground. The small golden details on her dress are cleanly applied, but do not really pop against the plain caramel flavored plastic. The overall sculpt is much more slim than the poofy dress that fit Machiko Soga so well. It does have fairly accurate bosom cones that, despite their constant presence in the series, I have never noticed until now.

Rita's simple arms have a universal joint at the shoulder with a simple cut swivel at the elbow. Her hands are permanently positioned to hold her wand and do have little molded rings, which are left unpainted. The charms around her cuffs are similarly bereft of paint apps. 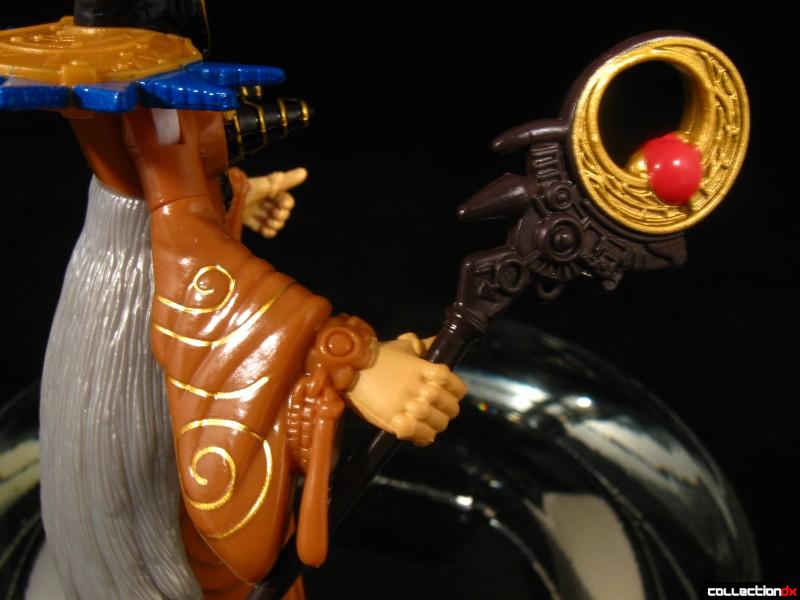 For accessories, Rita comes with her magic wand (DoraScepter). Sadly they did not include her trademark telescope (DoraScope). The wand is made of soft PVC and has minimal paint applications. She can only hold it near the top as anywhere else slides effortlessly from her hand. 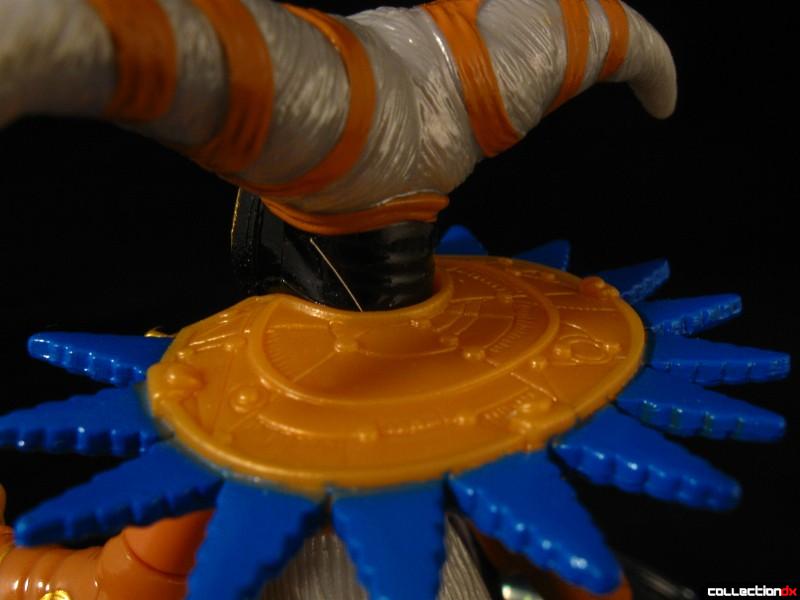 Her queenly collar is far from accurate to the original costume. Not only is it entirely the wrong color, it simple plugs into the back of her neck. Turning her head will force the collar to pop off. Since the piece is made of soft PVC, the tab which slots into her back tends to bend upon insertion, making the process more akin to threading a needle than the ubiquitous "Tab A into Slot B." Since Power Rangers toys have had their benefits cut, the included instructions are actually shared between several figures in the line. Rita gets shoved into the lower right corner. 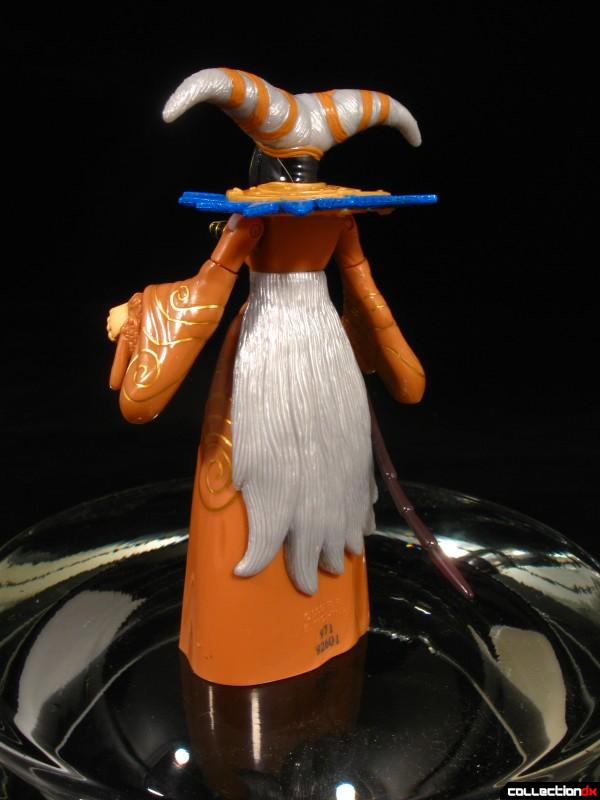 The hair on this figure is fairly well done considering the general quality thus far. It has a competent sculpt that suggests the strands of the massive wig the original costume had and the twin hair cones, while droopy, at least look the part. 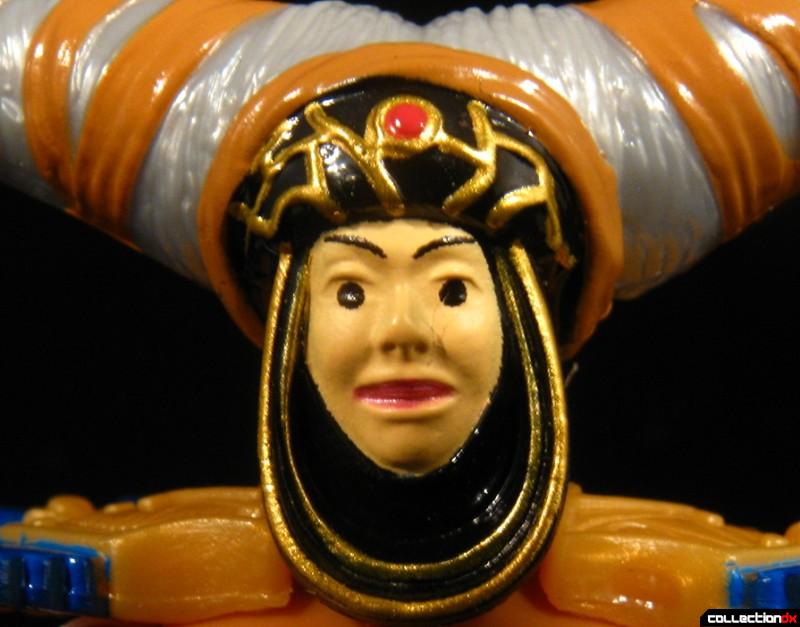 Oh my God! WHAT'S WRONG WITH YOUR FAAAAAACE

HAHAHA....ahh, yeah my sentiments exactly. I've seen her twice and I...I just can't do it. I thought it would be a hilarious figure to own, but I just can't make any use of that face. I did find Deker, though! I'm always up for a crazy skeleton man.

It would seem that while Rita was on the moon, she had a run in with a certain giant alien face taking robot.

Which one was that?

She was also in Spielban.

Toy of the year.

To think I saw one of these go for well over $100 bucks at one point on eBay.